Race Report: In an exciting test against the clock and the weather, Mads Schmidt of Denmark and USA’s Chloe Dygert took the gold medals in day 2 of the Richmond World Championships. The junior women’s race was run in perfect conditions, but the later starters in the under 23 men’s test had rain to upset the bookies predictions.

Before the men’s Under 23 individual time trial, the Junior Women had their battle over one 15 kilometer lap of the downtown Richmond course. 37 riders launched themselves down the start ramp and the early leader at the first time check was USA’s Chloe Dygert in 9:14, at the finish her time of 20:18.47 was good enough to put her in the hot seat 1:45.17 ahead of Canada’s Gillian Ellsay, but there was still 29 riders to come. Poland’s Daria Pikulik came through the check in second place with 9:42.53 and took second at the line with 21:59.53 at 1:41.08. At this point Dygert’s time was looking good. Emeliah Harvie (Canada) came through the check in 3rd place, but slowed to a time of 22:07.98 and off the podium.

With all the riders on the road, last rider off; Denmark’s Pemille Mathiesen was 3rd fastest 9:38.50, mean while at the finish Juliette Labous (France) moved into 2nd spot with a time of 21:54.43 still over a minute and a half down on Dygert. Emma White (USA) passed the intermediate point in 2nd place with 9:26.58 and held her speed and 2nd at the line with 21:24.00.

Australia’s Anna-Leeza Hull sped up from 7th place at the time check to move into 3rd place with a time of 21:44.55 and Mathiesen was now the only rider who could upset the US/Australian podium. It wasn’t to be as she lost time on the second part of the course to finish in 4th place with 21:46:88. 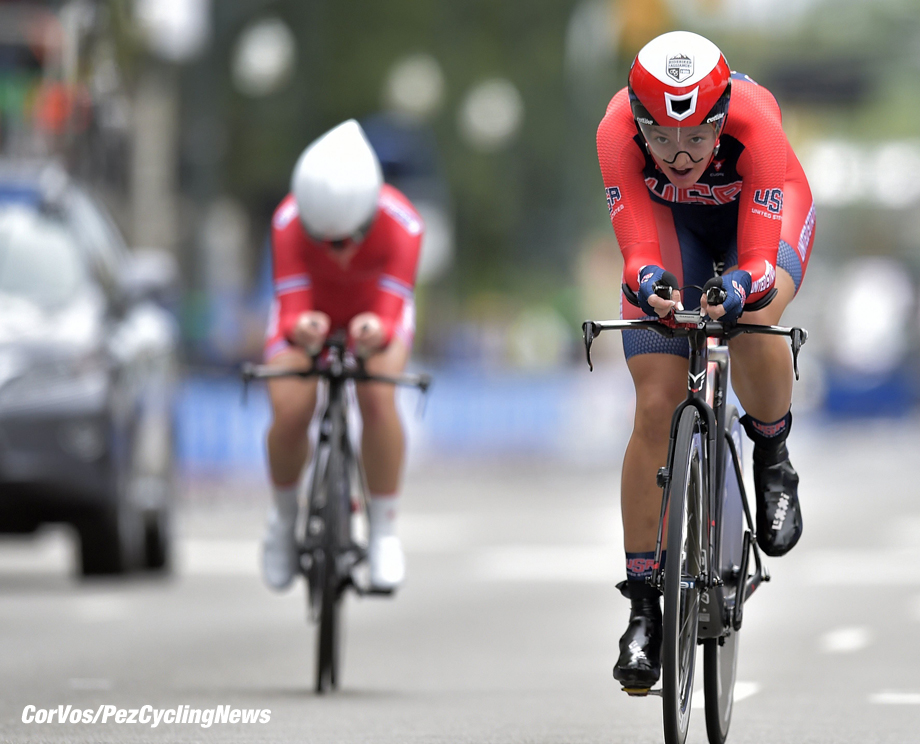 A very strong showing from Dygert 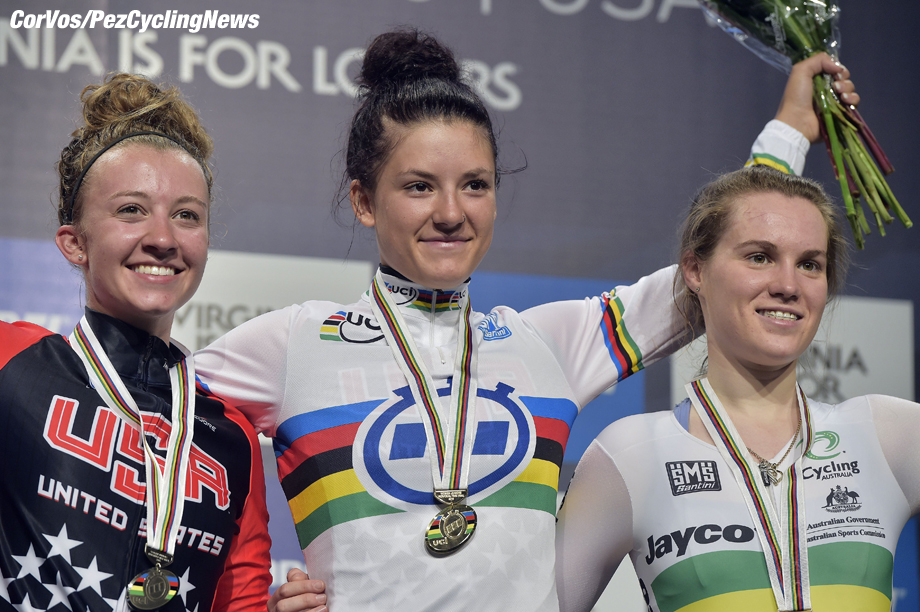 51 riders started in the Men’s Under 23 Individual Time Trial, one non-starter was Andrej Petrovski (Macedonia), which was known before the start, but also Amanuel Ghebreigzabhier of Eritrea didn’t take his place on the ramp. The under 23 men faced two laps, 30 kilometers, and started at 2 minute intervals in five groups. 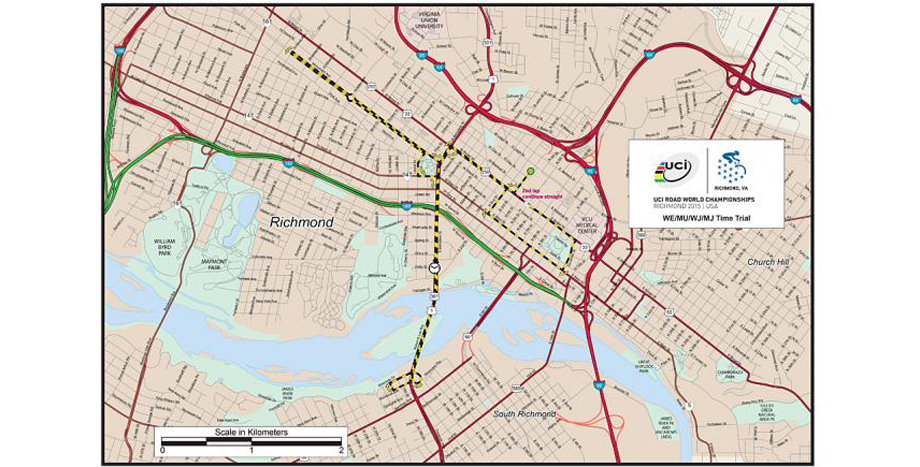 First Phase
First man off; Sean MacKinnon (Canada) clocked the fastest time (as you would expect) at the 1st time check with 8:40.78 and at the end of the 1st lap he set 19:18.72 which stood until Colombia’s Jhonatan Ospina took 8 seconds at the 1st point and at the end of lap 1 the Colombian had dropped to 3rd by 11 seconds. South African rider Nickolas Dlamini had put up a good ride to move into 2nd at the 3rd point with 28:35.94.

At the 3rd time check MacKinnon set the time of 28:42.67 and at the finish his time was 38:47.06 and it was the time to beat. Nikolay Cherkasov (Russia) came in 17 seconds down which at this point was good enough for third with Stepan Astafyev (Kazakh) in second.

Second Phase
Out on the road and Nathan Van Hooydonck (Belgium) set a new best at the 1st time check with 8:32, but Mads Schmidt of Denmark jumped over him with 8:25 and then at the end of the 1st lap Schmidt was again the fastest ahead of German Max Schachmann with 18:44 and Italian Davide Martinelli with 19:07 in 3rd.

At the 3rd point; it was Mads Schmidt again who was fastest with 27 minutes with Schachmann in second, Martinelli third and Daniel fourth. It looked like they will be moving on to the top final places.

Gregory was first to take the lead with 38:41.72, the young American collapsed over the line and had to lie on the road to recover. Van Hooydonck was next and was fastest, but not for long as Schmidt came in with 37:10.98 to beat the Belgian by 1:26. Martinelli dropped between them into 2nd with 38:08. Schachmann hammered up the final climb to the line, but was short of Schmidt’s time by 12.20. 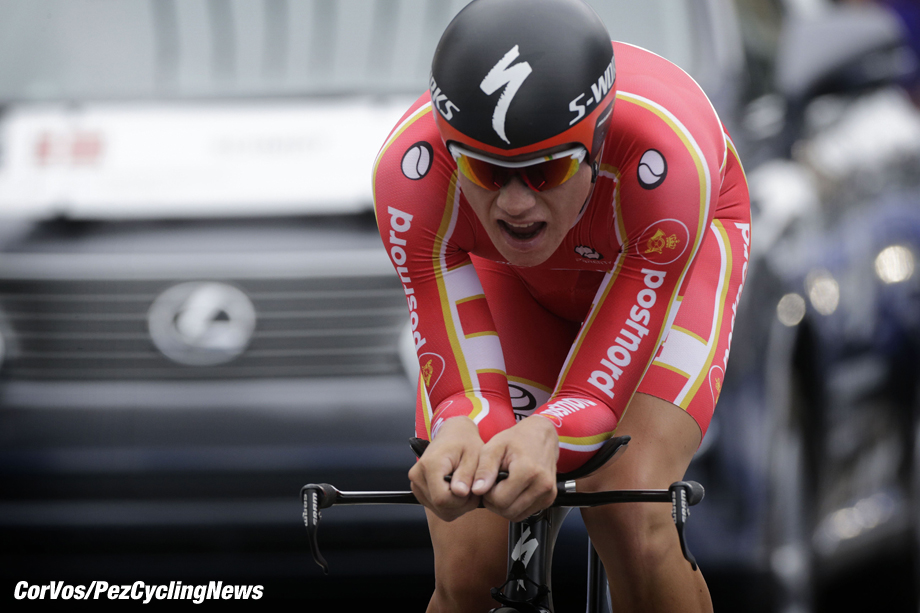 Schmidt might have had better weather, but he was fast

Third Phase
The eleven riders of this phase were not expected to set the World on fire and they lived up to that. Best rider was Karlsson of Sweden was 5th at the 1st check, 4th after 1 lap, at the 3rd point he was 5th with 27:51.82 and at the finish he clocked 38:22.36 for 4th. The other notable rides came from José Luis Rodriguez (Chile) 6th, Merhawi Kudus Ghebremedhin (Eritrea) 9th and Josef Cerny (Czech Republic) in 12th.

So no change to the top three.

Fourth Phase
Another group of 11 and Britain’s Owain Doull slotted into 3rd place at the first time check and Frenchman Marc Fournier in 4th. At the end of 1 lap Doull was in 4th place as Miles Scotson (Aus) was in 3rd, Thery Schir (Swiss) had moved into 6th and Fournier had dropped to 12th. At the 3rd point; Schir was in 4th place with 27:24, James Oram (NZ) in 5th, Doull was 6th, Daniel Eaton (USA) in 3rd and Truls Korsaeth of Norway had moved into 8th. 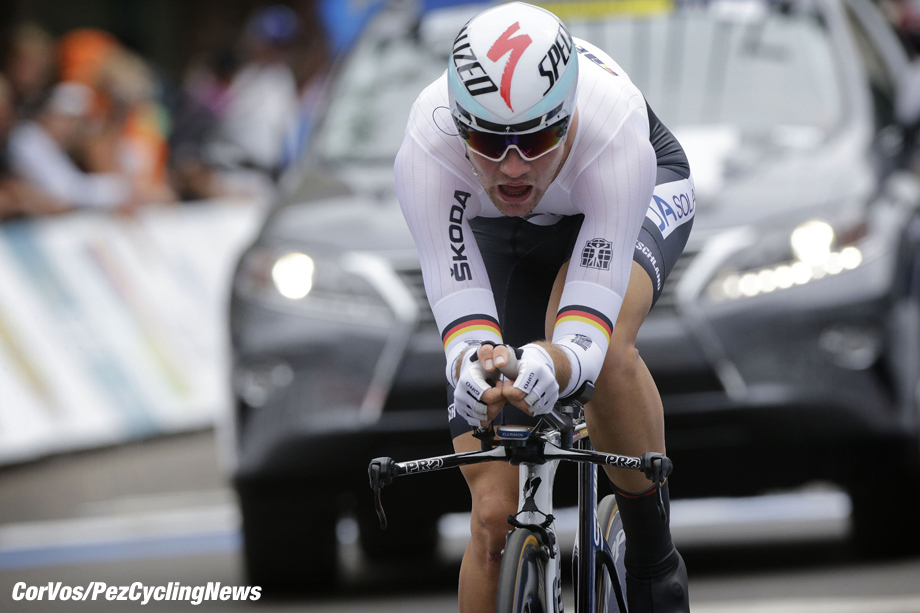 Fifth Phase
The last eight riders were expected to produce the winning time with a fight between Ireland’s Ryan Mullen, Steven Lammertink (Holland) and German Lennard Kamna, but the rain had started to fall causing them to take it easy on the slippery bends.

At the 1st check point: Kragh Andersen (Den) was 3rd and Kamna 6th, but Lammertink was 21st and Mullen 25th, the weather was taking its toll.

After 1 lap: Kamna had jumped up to 4th as Marlen Zmorka (Ukr) moved into 5th but Mullen’s chances of winning were gone as he was in 17th. At the 3rd check; Kamna moved into a podium place in 3rd, Zmorka was still riding well in 6th and Mullen had moved into 11th place.

Mads Schmidt was looking fairly comfortable in the hot seat as he waited to see the later riders cross the line. Marlen Zmorka pushed into 8th place, but that wouldn’t last. Lammertink was 14th and Mullen 11th. 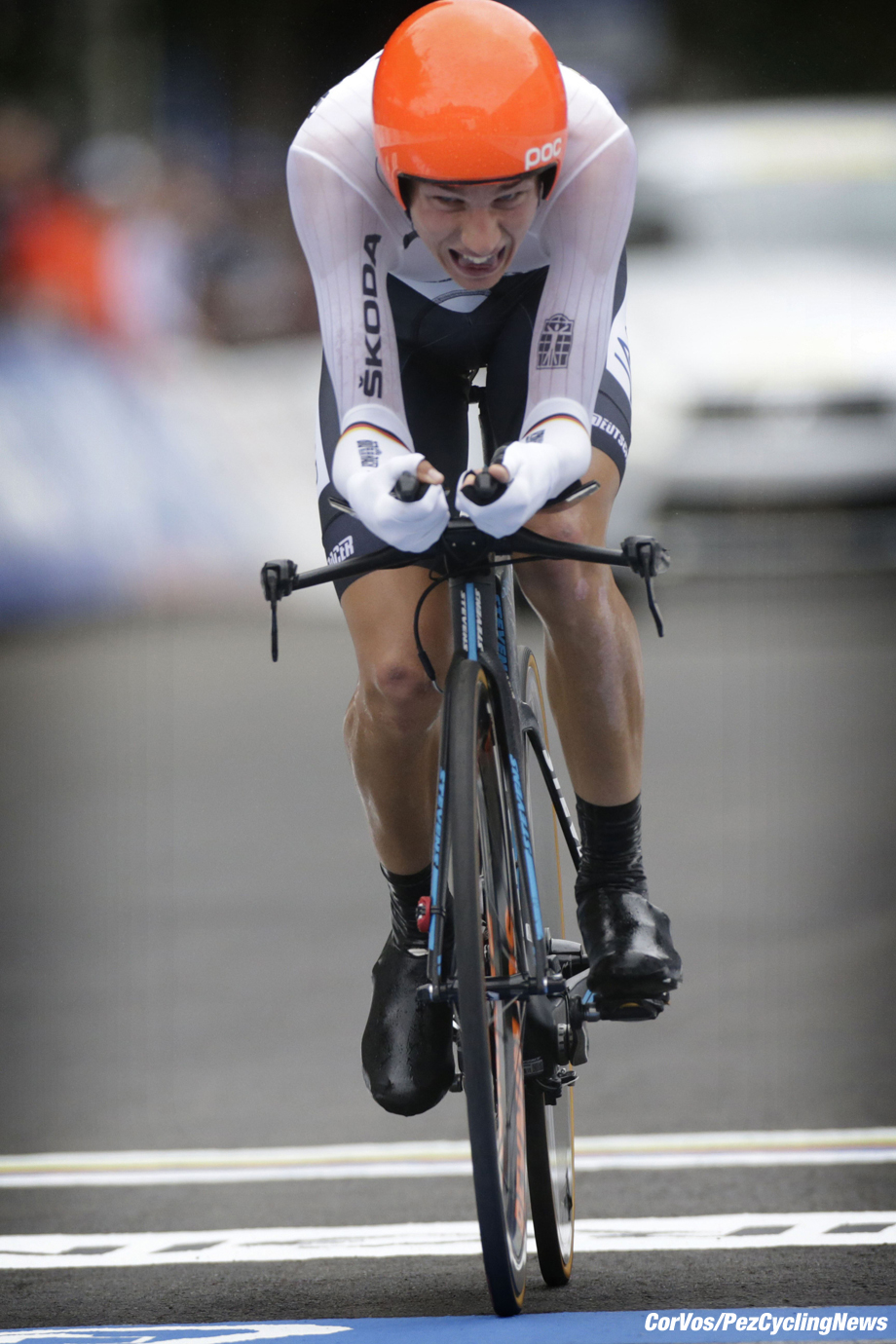 Lennard Kamna came from behind for 3rd

We just had to wait for Lennard Kamna, he came round the last corner and powered his way to the line and squeezed into the bronze position, what could he have done in the dry?

There is the future of cycling, stay PEZ for the Women’s TT tomorrow and the Men on Wednesday. 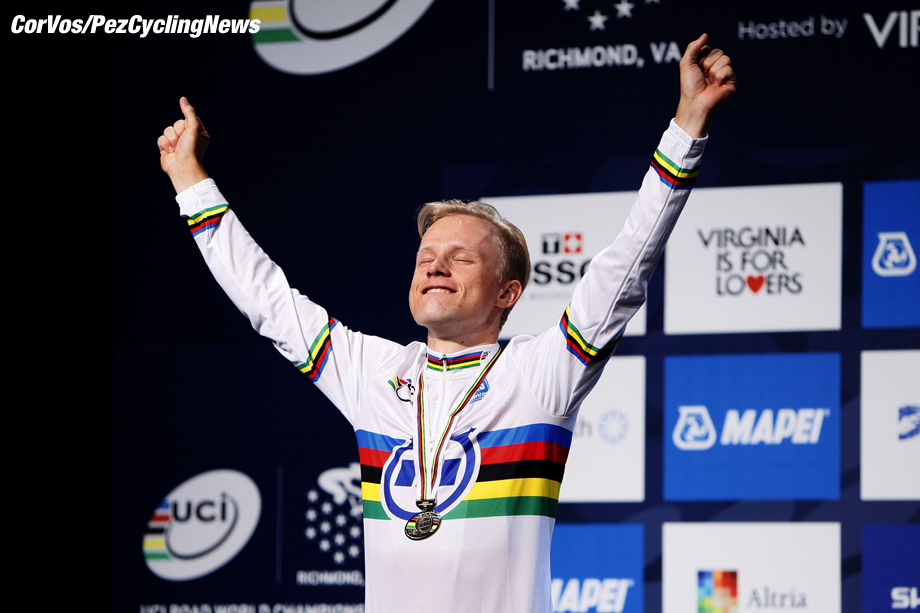