Race Report: Another hot day in the desert of Doha nearly saw a big upset in the World Men’s time trial championships as Irishman, Ryan Mullen held the ‘Hot Seat’ for a long time. In the end the top men against the clock deposed him of the throne and German multi-champ Tony Martin took back his TT title from second placed Vasil Kiryienka.

For a long time it looked as if there was going to be a fairytale moment on the World Elite Time Trial podium as Irishman Ryan Mullen held all comers at bay – but the men who seeded the field had got it right and in a flurry of late speed Poland’s Bodnar, Spain’s Castroviejo, Tony Martin of Germany and reigning champion, Vasil Kiryienka all eclipsed the man in green’s fine early time.

But it was the German ‘chrono meister’ making it a double Doha gold – TTT and his fourth individual TT title, having topped every check – very impressive. 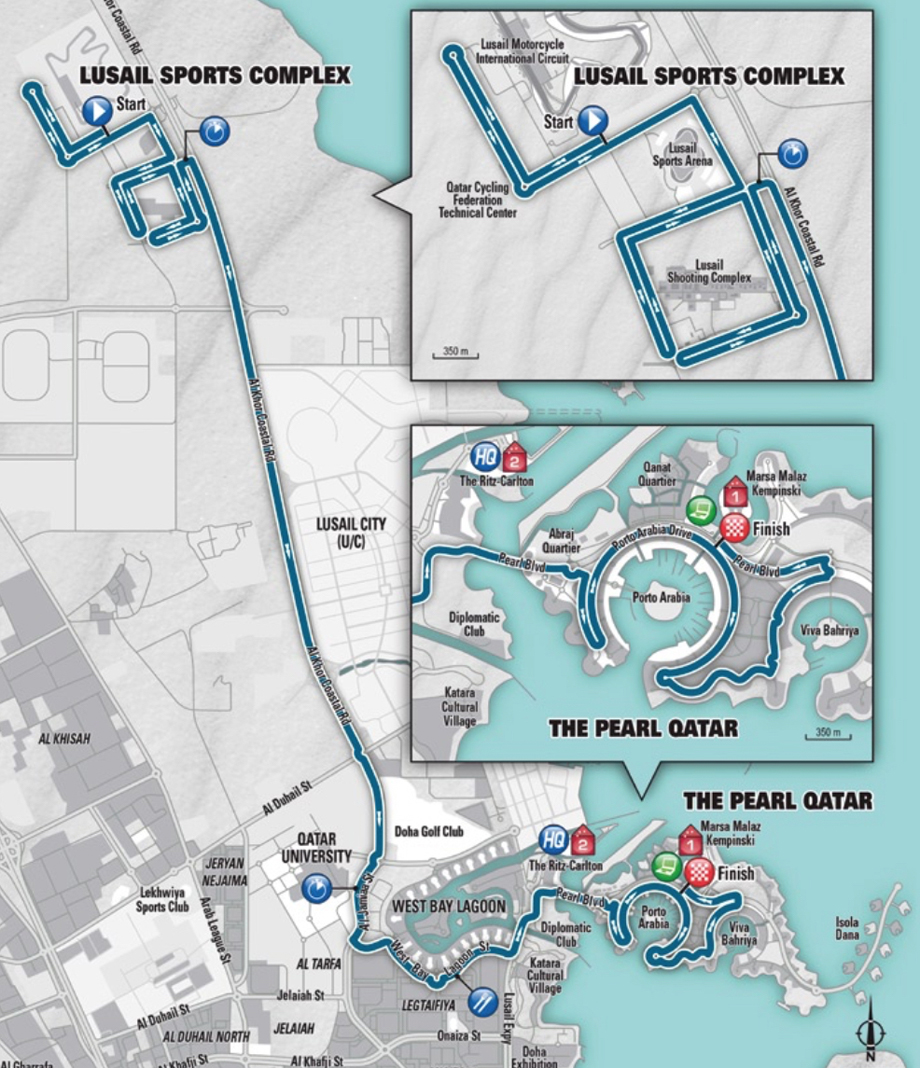 Ireland’s former Worlds U23 medallist, Ryan Mullen was the early leader off number 12 at check one – but with many big guns still have to deploy. However, the big Irishman also leads into check two; nice riding – with Dutch ‘chronoman’ Van Emden failing to match the man in green at check one. Poland’s Marcin Bialoblocki who recently broke the British ‘out and home’ 10 mile (16 kilometers) record with 16:35 and the 25 mile (40 kilometers) record with 44:04 can’t match Mullen at check one as the Irishman zooms home in 46:04. 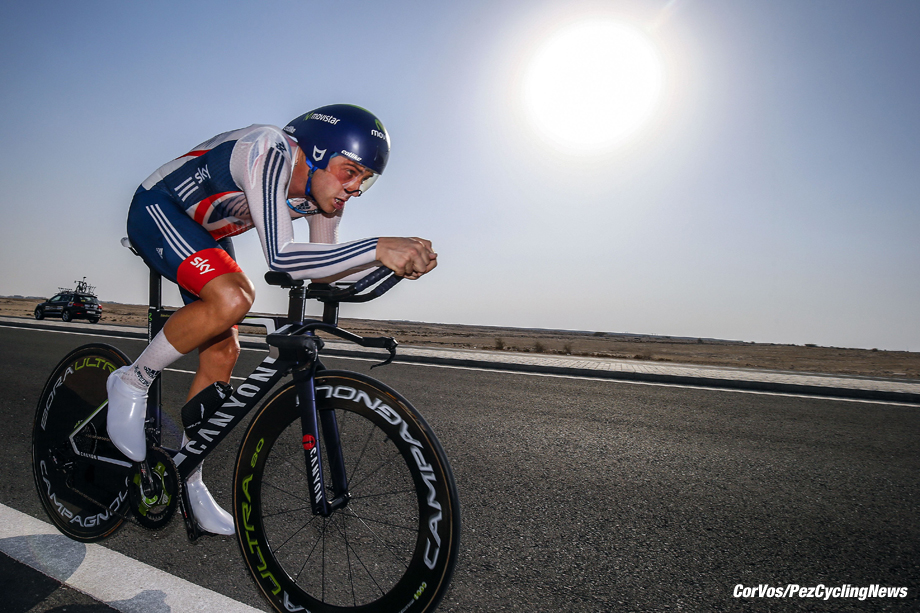 Champion of GB Alex Dowsett keeps cool with an ice jacket as he waits to board that Canyon and drop out of the start house. Giro TT winner Primoz Roglic (Slovenia) heads out into the furnace whilst Bialoblocki finishes but can’t match Mullen to the tune of almost a minute. We had the big Pole down as a possible medallist. 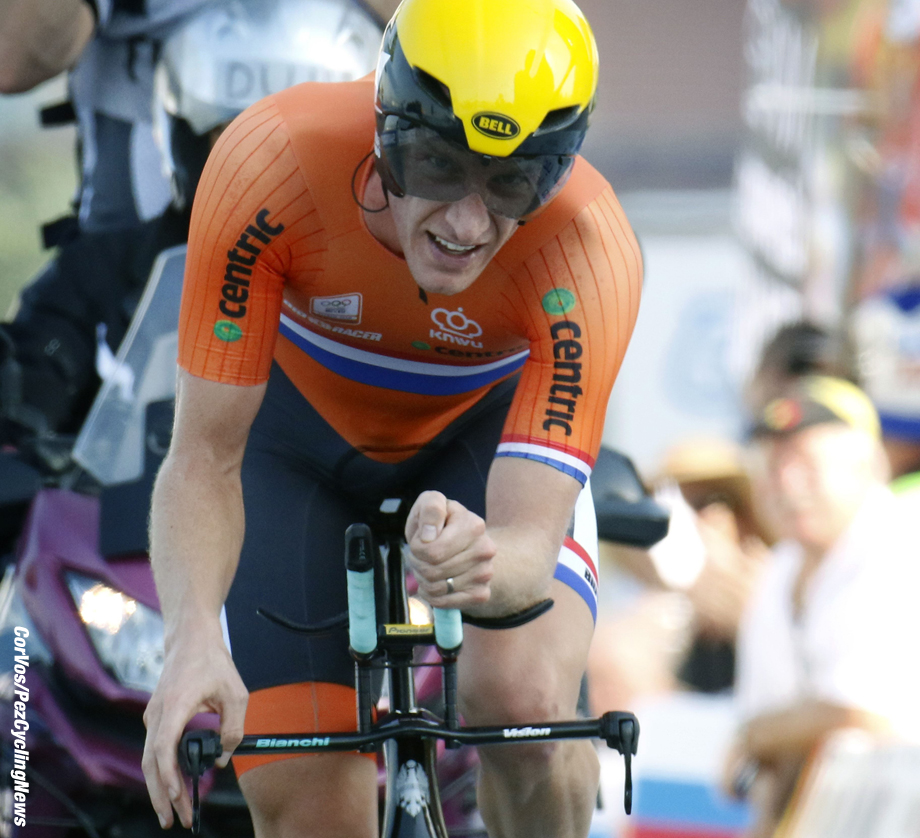 Van Emden can’t match Mullen at the line – the Irishman’s time is looking better by the minute. Former World Pursuit Champion, Stefan Kueng is out on the hot tar and looking very stylish – as Durbridge fails to match Mullen at check one. Taylor Phinney on the ramp – he launches in front of maybe a dozen people. . .

Edvald Boasson Hagen now, in a white strip – a sensible color in this heat. Roglic misses the mark at check one as does Kueng despite that nice style.

German Champion and three time World Champion, Tony Martin flies – he was nowhere in the Olympics, but winner of the Tour of Britain Time Trial and one of the four finishers in the Etixx Express TTT triumph. Aussie Champion Rohan Dennis is one of the favorites today, winner of the Eneco Tour time test and just so aero. Rio was jinxed for him with failed equipment and a puncture – this could be where he makes amends? 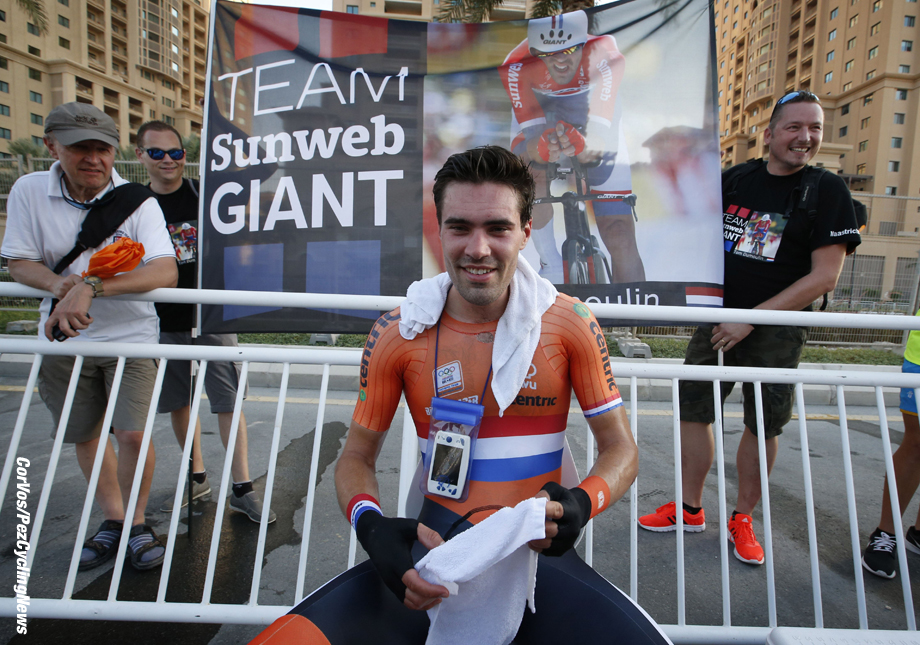 Not Tom Dumoulin’s day, but his fans still love him

Dutchman Tom Dumoulin took silver in Rio and this parcours should be right up his street – he’s big, powerful, fast. Vasil Kiryienka (Belarus) is last off and that’s it – they’re all out on the hot tar of Qatar.

And still Mullen holds firm – wherever he finishes this has been a great ride as Jungels can’t match the man in green at check one. Steve Cummings misses Mullen’s time by a minute and more at the finish – that was a serious ride from the man from the Emerald Isle.

Castroviejo is in his usual beautifully compact tuck, he shouldn’t be far off a medal this day. Kiwi Jack Bauer goes top ten – just nice to see him back from serious injury and in the frame. Durbridge now with a 47 minute effort for sixth.

Tony Martin at check one; the German has nearly eight seconds advantage on Mullen and looks great on the bike, at one, powerful, aero, fast.

Dennis misses Martin’s time by 10 seconds at check one with Dumoulin 20 plus seconds back – a medal is possible for the Irishman.

Roglic finishes, off the pace. 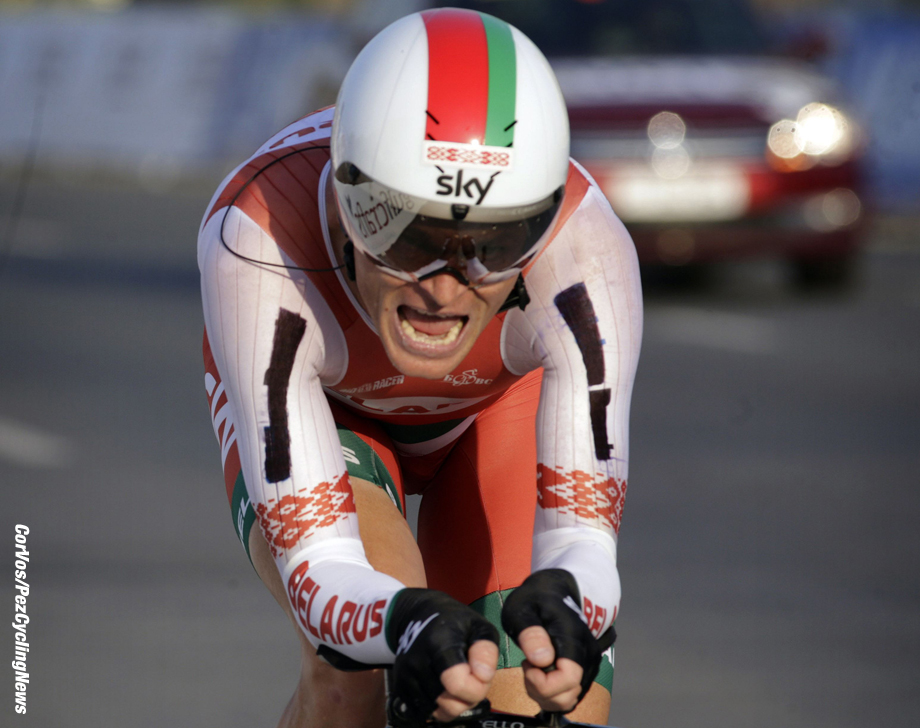 Kiryienka tried to hold his title

Kiryienka is second to Martin at check one – as smooth and solid as usual. Meanwhile back at the finish the ‘names’ continue to fall short of Mullen’s time.

Martin is top at check two; as Kueng is another to miss out – a minute plus is the deficit on the line. Out in the sand, Dennis is ‘chugging’ the gear, it’s not happening for him. Dowsett is shy of the Irish finish mark too. Dumoulin looks good but isn’t ‘on’ – a minute down on Martin at check two. Kiryienka is 20 seconds plus off Martin’s time at check two.

Phinney is home with a 47 minute ride, not the man who was second in Valkenburg. Martin looks strong, strong, strong – thumping a big gear home into Doha. Boasson Hagen is two-and-a-half minutes off the pace – ouch.

Mullen is still on his mobile phone – and still in the hot seat. . .

The Polish ‘Bison’ goes TOP to elbow Mullen off that hot seat by a handful of seconds but immediately behind it’s Castroviejo who zooms in and goes top, but what’s this? 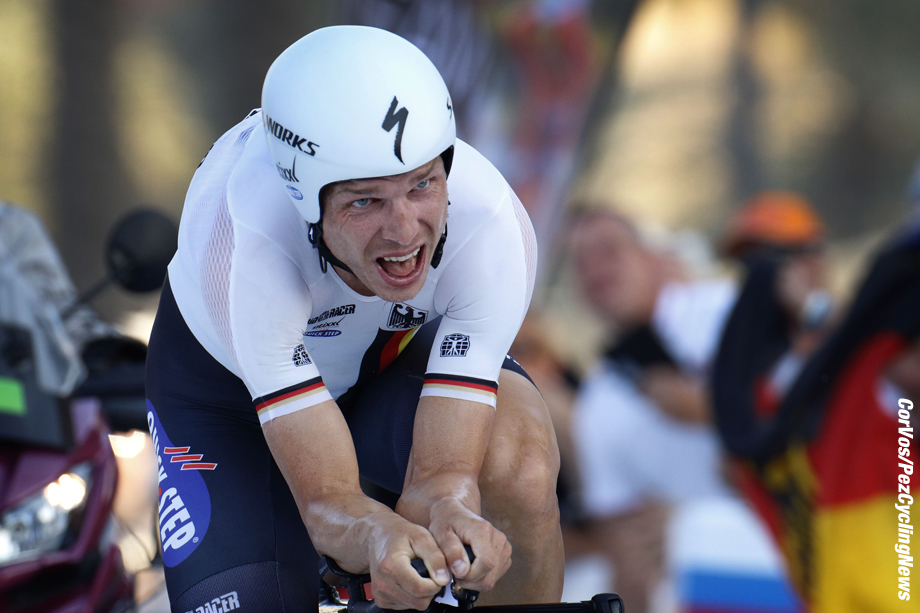 Tony Martin was just too good

He’s almost caught the Spaniard for 90 seconds. Martin top in 44:42 from Castroviejo and Bodnar.

Kiry? it’s not to be, second @ 40-odd seconds, Bodnar drops off the podium.

Martin’s second gold of the week with great rides by Kiryienka, Castroviejo. . . and that man Ryan Mullen. 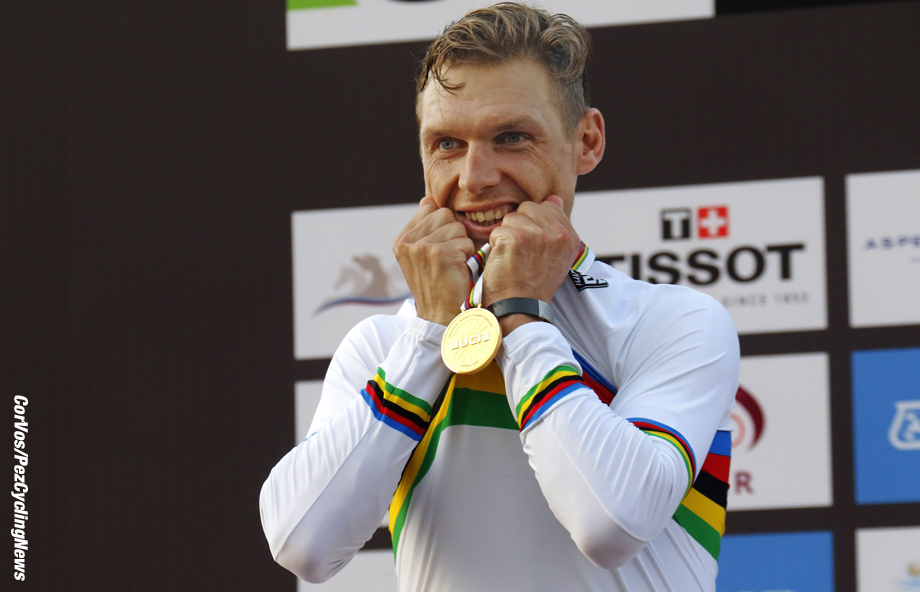 Another medal and jersey for Martin

Round up of all the World’s time trials tomorrow in EUROTRASH Thursday.