Race Report: Two years in a row for the man himself, Slovakia’s Peter Sagan. The Men’s World road race was blown to pieces by the Belgian team on the wind-swept desert of Qatar, the group of strongmen were never seen again as the hammer went down. At the finish it was a sprinter’s battle royal between Sagan, Mark Cavendish and Tom Boonen – the Slovak had the speed and the agility to take his second rainbow jersey. 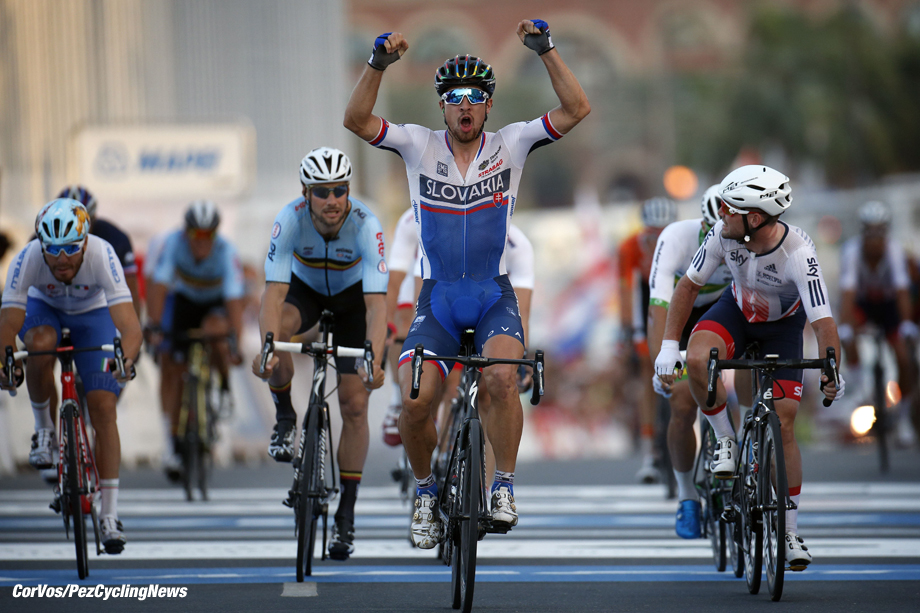 ITMA! As the old British radio show used to be named “It’s That Man Again!”

Just when it looked like Boonen was going to turn back the clock and make it two, then perhaps Cav was going to do the double it was that man who can to do it all, Peter Sagan holding on to that rainbow jersey he’s honored so well to rule the world for another year. Cav took silver, Boonen bronze – confirming that he’s still one of the very best.

It was a strange race with just the finale and a savage, Belgian initiated offensive way out in the desert to make it memorable. Between the start and the Battle of the Belgies and from there to the finish it was processional. 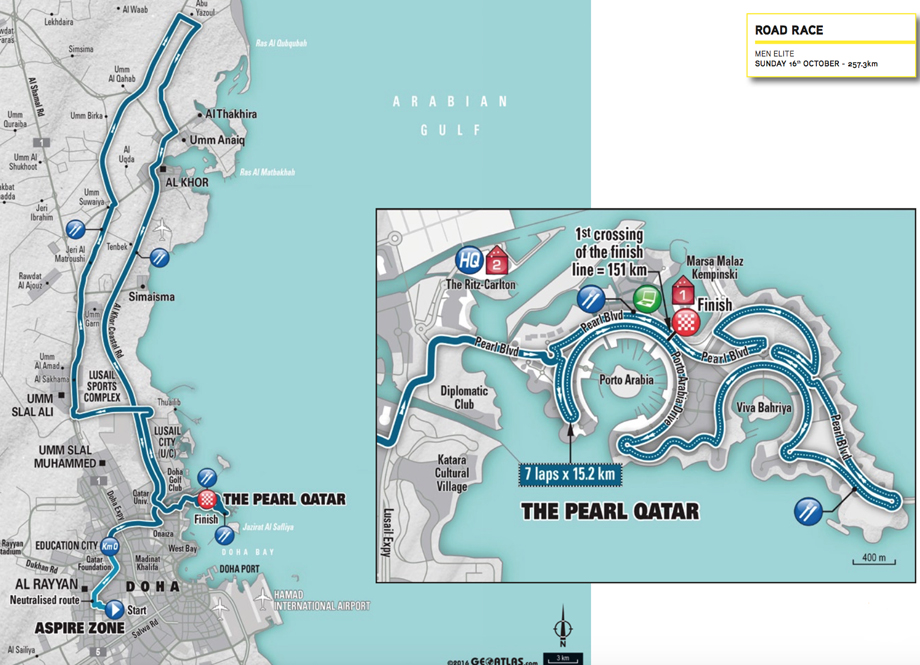 Rigoberto Uran hasn’t started – that doesn’t help the Gaviria cause.

“Wagons roll” and Daniel Teklehaimanot is first to try his luck – calm down boy! There are flurries – and yes, one has stuck: Berhane (Eritrea), Corella (Mexico), Dougall (Republic of South Africa), El Abdia (Morocco), Lagkuti (Ukraine), Ramirez (Colombia) and Roth (Canada) – that’s Mondialisation for you (Little did we realize that most of them would still be in the lead group nearly six hours later). 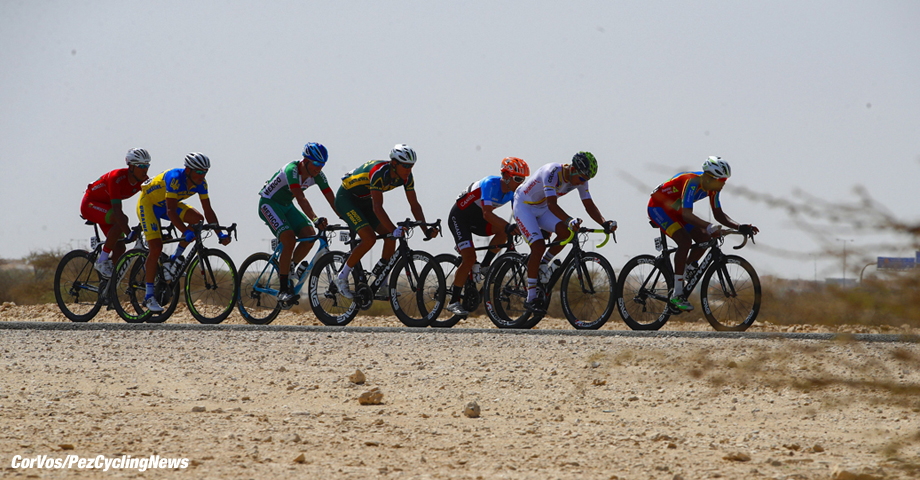 Oh yeah, and no Carlsberg tents. Kiryienka is up front now, he wouldn’t be helping GSkyDataB would he? (“No! Of course not! Editor”) There’s been a wee crash at 205K in, five down including Chad Haga – there’ll be more, this day. . .

This race will be the last 100K once it enters Doha – and make no mistake, the ‘non sprint’ teams will have a plan which does not involve a mad purge for the line. The parcours will change direction, shortly and we might just get echelons but it’s still early days as the Magnificent Seven continue with their labours of Sisyphus (for non Greek scholars he was the dude condemned to keep pushing that boulder up the mountain, only for it roll back down and Sisyphus to start all over).

No echelons but a peloton which swarms and changes shape constantly. I guess we should be thankful that we’ll see a full distance race – I was worried with all that ‘shorten the distance’ chat. ‘Six green bottles’ just hanging on the wall as Mexico pops from the break who have 7:30 inside 180K to go on much narrower road metal. 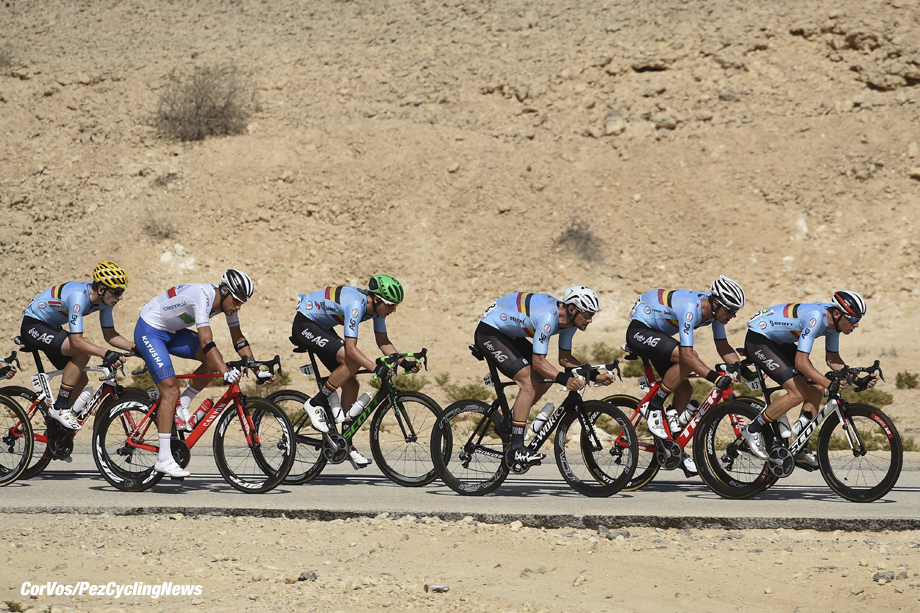 The Belgian team split the pack in the desert

As the peloton approached the narrower road it goes wild – fast, fast, fast. GB rule the front as the first echelon forms at 73 kph – and it’s split. It’s over for Dumoulin – double puncture. Boonen is with GB, Italy is there, Boasson Hagen, Sam Bennett, Matthews, Greipel. . .

Ewan has gone as the echelon blasts through the wasteland at warp speed. Devastation – it’s blown to pieces and there are crashes, Durbridge, Mezgec, Gaviria all down. Belgium are pain dealers in chief – this looks like the race, some 25/30 riders in the echelon and the rest swimming hard for shore.

The break is caught – Terpstra, Sagan, Hayman, Cav, Matthews, Vivianni, Boonen, GVA, Stuyven, Nizzolo – but the Manxman has lost Thomas, Stannard and Rowe. There’s a group chasing around a minute back as the leaders begin to dally – they can get back. . .

. . . Maybe – there are six Belgians up front and they’ll make that second group fight to get back. The boys from the Flatlands have certainly done a job. . .

Adam Blythe drops back for bottles for Cav – Adam needs a big ride here today to get himself a contract for 2017. Doha, we’re almost on the circuit. That gap, is still one minute back to group two and some of the riders in there are starting to get desperate – they can see the race slipping away as up front those Belgians keep the pot boiling. 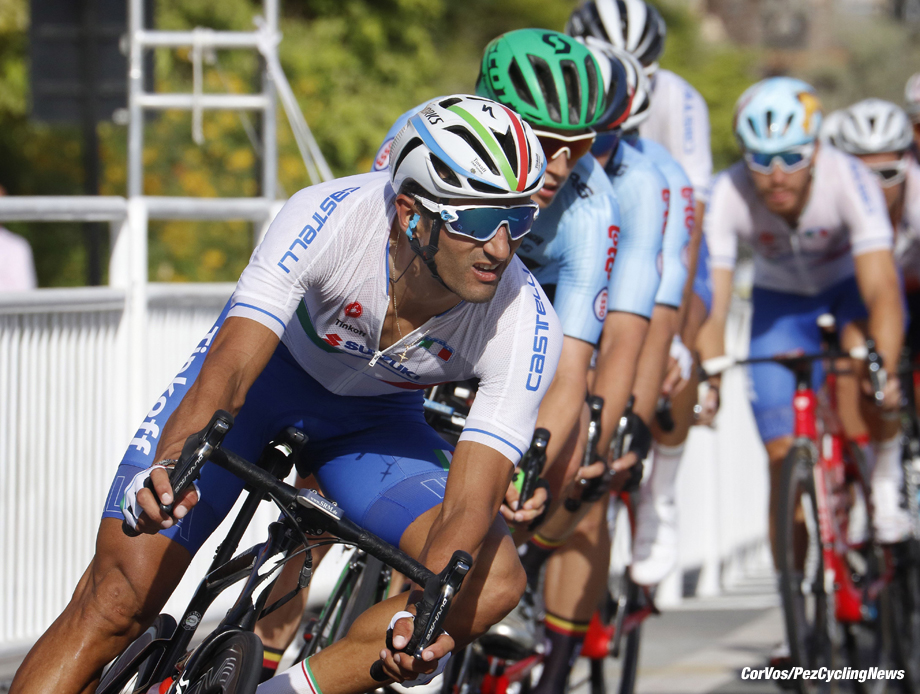 Bennati helps the Belgians as the ticker counts down to 100 K and the gap to group two is beginning to stretch – 1:25. Haller and Schar try to bridge – that’s optimistic. . .

At the line the commissars pull out a huge group on the line; some big names – Oss, Thomas, Stannard, Renshaw, Dumoulin and three team mates. . . Group two and the Germans are desperate now in here; but all of a sudden they all sit up – it could be over for this group?

Degenkolb goes again but a Belgian is right on him – 1:29 the gap and the heat, speed and distance have all taken their toll on group two. Inside six laps to go and the gap stretches out towards two minutes – that’s 25/26 left to ride for the title.

Blythe punctures out of group one – a poor, poor change for the British Champion, not good news for Cav. But he’s back and now it’s five to laps to go as Belgium continue to lead. Of our favorites we mentioned in our preview we have Bennati, Boasson Hagen, Boonen, Cav, Colbrelli, GVA, Kristoff, Matthews, Nizzolo, Sagan, Stuyven, Terpstra and Viviani all there.

But we don’t have Bennett, Bouhanni, Costa, Degenkolb, De Mare, Greipel, Groenewegen, Kittel who are all off the pace and it’s very unlikely they’ll be in the final mix. And Gaviria crashed way back. Degenkolb squirts one of the Belgians with his bottle – but what’s the man to do? Boonen is up front – he can’t chase. But Degenkolb is so frustrated he continues to lecture Debusschere, the Belgian for disrupting the chase, lecturing him that Greipel is his team mate. That’ll make all the difference to a man who grew up in the kermises. . . 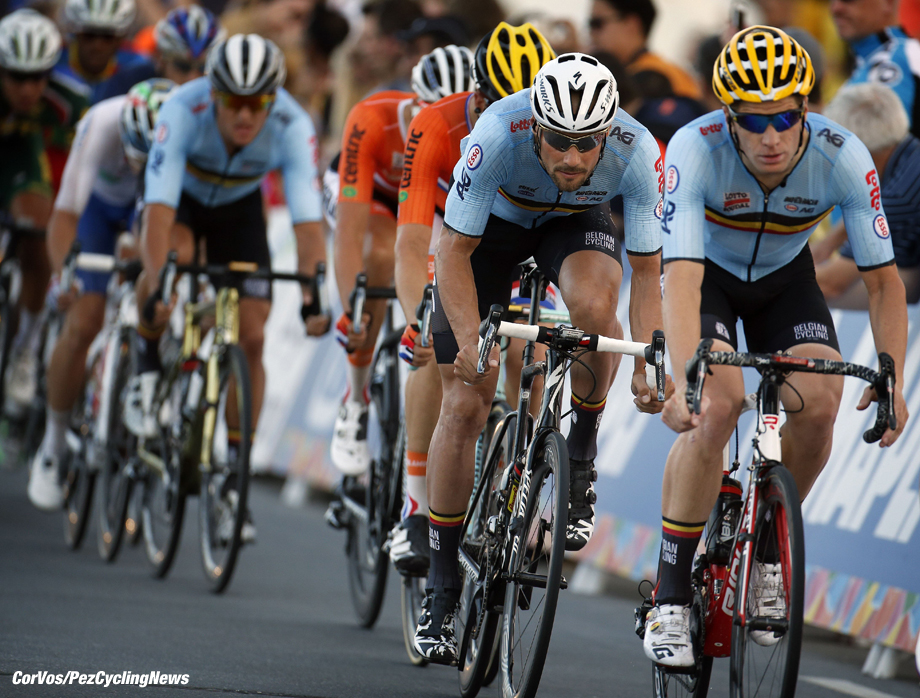 Four laps to go with Belgium and Bennati burning the watts – group two is at 1:56 past endless barriers with the odd fan or two out to watch. Kittel is on the front of group two now – a last throw of the dice to try and bridge that gap. But we’re 200K in now and approaching the last hour – which, as ex-Peugeot and Raleigh pro, Billy Bilsland always says; “is the race – but you have to get there! ”

Keukeleire is doing a big job here for his Belgian team but all of the sprinters are hiding as we hit three laps to go. The gap back to group two is out to 2:34 – very had to see that coming back. Degenkolb and Kittel pull out, emotional, wasted with the stress, the disappointment, the heat. . .

Cav must be licking his lips out there – status quo for lap after lap as the finish gets ever closer – group two are out of it. Inside 10K and we’d have expected Belgian attacks. . .

Those hard working Belgian domestiques pop – no surprise, as does Bennati. Five K and Terpstra feints but everyone is too sharp. . .

Kolar now for Sagan, using his past strength for the cause. Inside four K now, Cav’s quickest – but Matthews isn’t slow, Boonen is ‘Mr. Qatar’ and Sagan, well he’s Sagan. 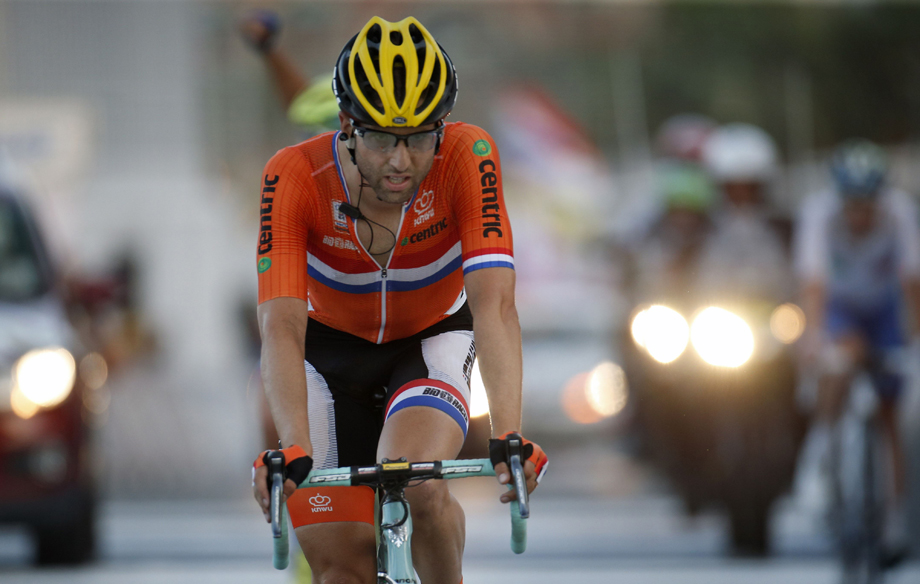 Leezer went for a late attack

Leezer goes for The Netherlands inside three K, punishing that Bianchi. He has six seconds. Red kite but they’re coming, lead by Belgium and Leezer is gone. . . 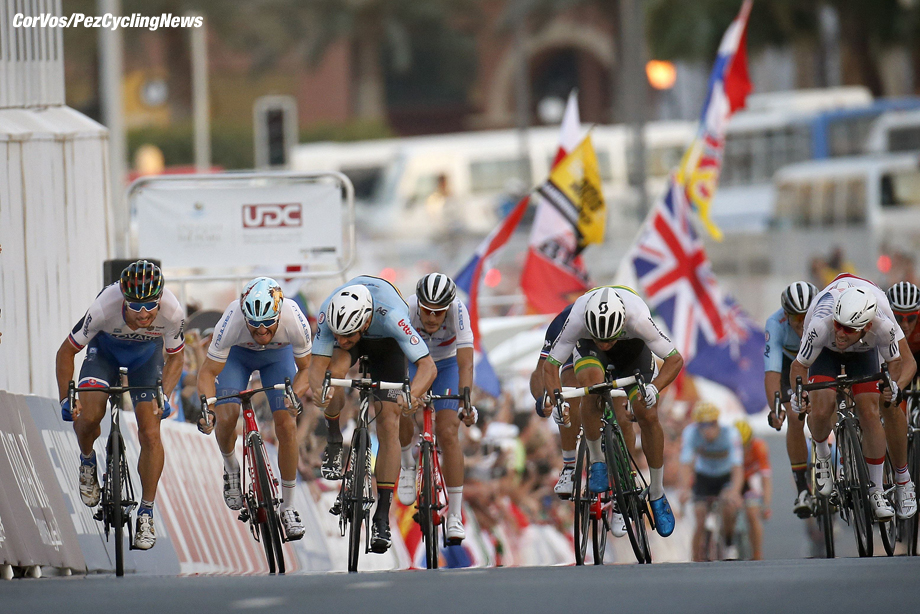 It’s Sagan from Cav and Boonen – a quality podium then but apart from that brief battle in the desert, not a the greatest of Worlds. 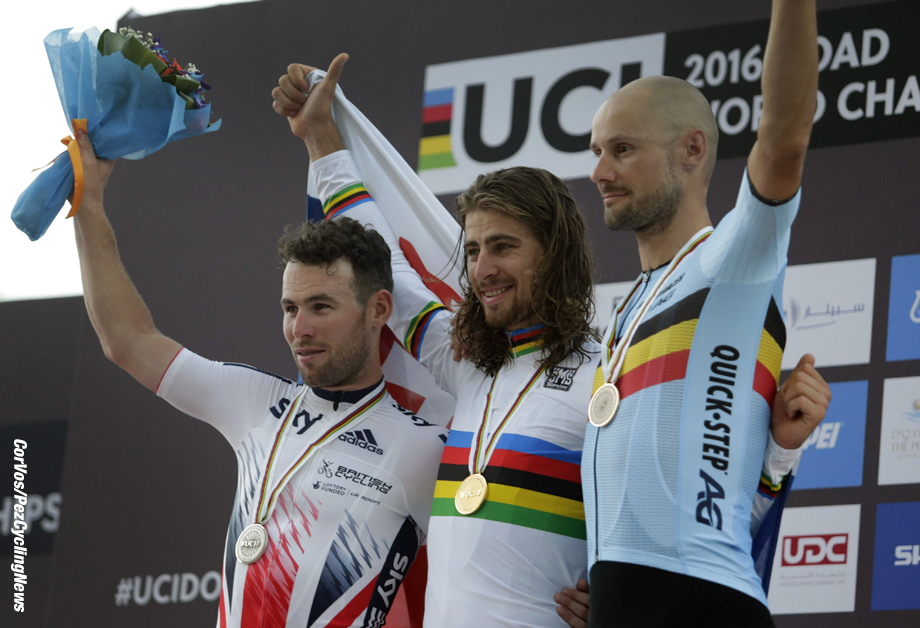 Not a bad podium