Race Report: The 2016 World Road championships kicked off on Sunday with the team time trials for the Elite men and women. The Women’s race was dominated by the Boels Dolmans team with a 48 second win over Canyon-SRAM. The men’s race saw a battle royal between defending champions, BMC and two time winners Etixx – Quick-Step. The Belgian squad came out on top by 12 seconds.

On a hot, windy Doha afternoon in front of zero spectators, Belgium’s legendary Etixx QuickStep squad wrested back the title they’ve won twice in the past from the men who beat them last year – BMC. Aussies, Orica took bronze but well back from the Belgian v. Swiss cage fight which saw the men in blue top 56kph to win. In a cliff hanger finish with both teams taking huge risks into the roundabouts in the closing stages the Belgians edged it by 11 seconds. 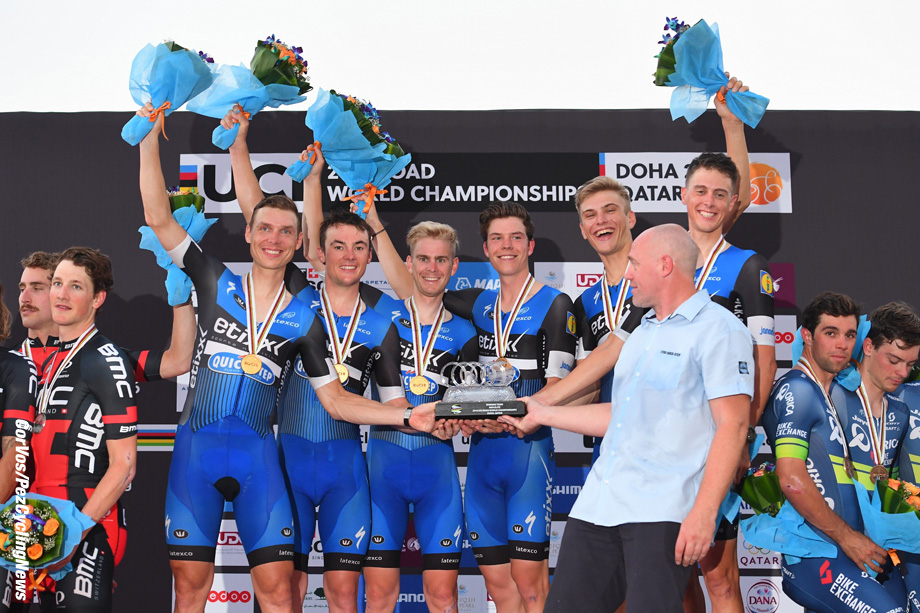 The Mens’ TTT field may be down on recent years – it’s a big financial commitment for a Pro Conti team to bring men and machines way out here to the desert – but all of the cream is here. Since the race was introduced in 2012 only five teams have won a medal – Quick-Step in it’s various incarnations, BMC, Orica, Sky and Movistar. And they’re all here.

The Belgian super squadra is most successful, never out of the medals with two golds, a silver and a bronze. BMC have two golds and a silver – some would say that if Taylor Phinney hadn’t exploded the team on the Cauberg in 2012 it would have been three golds.

Race distance is 40K, the parcours pan flat with the wind rather than gravity providing nature’s obstacle to speed – right up the street of the Belgian Beasts and BMC Behemoths.

The ladies ‘warmed the tar’ – albeit was scorching already – for the men, their starting efforts made in front of exactly NO fans. The ladies gave us the flavor – long straights, cross winds jiggling the flags in the start area, no clouds, heat, echelons, zero spectators, high speeds and riders in really bad ways with the heat as the race progressed.

Lizzie Deignan and her Boels Dolman team were way too quick for the rest, covering the 40 K in 48:41, well into 30mph plus territory. 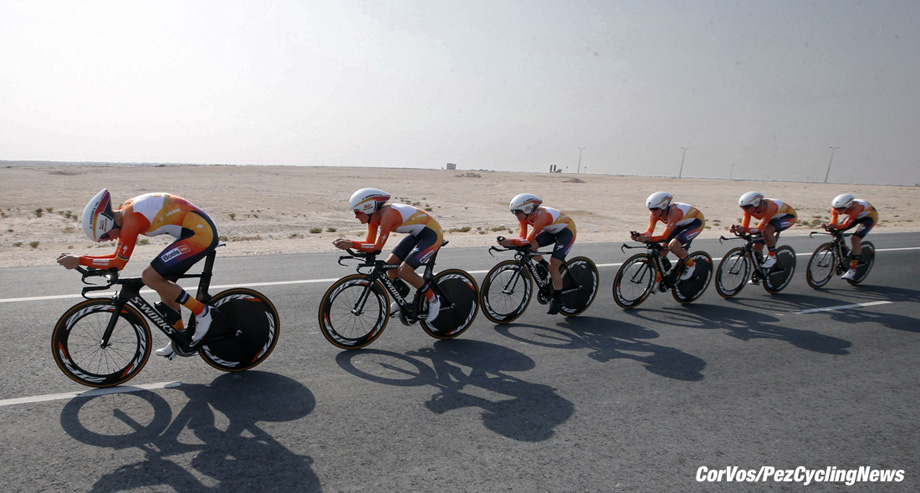 First men’s team on the ramp was German Continental team, Stradalli Bike Aid but they lost a man immediately with a mechanical.

Old war Horse Francisco Mancebo is the main man with local favorites – that’s if there were any fans – Skydive Dubai, second off the ramp.

Vino 4-Ever from Kazakhstan next off the ramp; then the Cycling Academy Team from Israel – with that hairy man, Dan Craven in there, must be HOT. Kols BDC was next and before long – messy. . .

AG2R-La Mondiale the first World Tour team to head out into the wilderness then Russia’s finest, Katusha with PEZ friend and six day star, Michael Mørkøv in there. Another team with Eastern promise now – Astana, with the discs quickly making the right noises. LottoNl-Jumbo – some big strong boys in there, Van Emden and Roglic will love this parcours.

Meanwhile, out in the Badlands, Kolss BDC go top at check one. Giant-Alpecin go next with Dumoulin as their main man – black kit not the best in this heat. Verandas Willems are looking good and go easily top at check one.

More men in black on the line – Team Sky; with Kiryienka and Thomas the biggest of their cylinders.

Orica now with two silvers and a bronze in this discipline and power house veteran Tuft one of their best.

AG2R go top at check one. Movistar now, last year’s bronze medallists with Euro Champion Castroviejo and GB champ Dowsett – but they’ll miss Malori who was made for this parcours but still not 100% after his crashes.

Katusha top the board at check one as Patrick Lefevere’s Etixx boys ready themselves for their 40-odd minutes of pain – the windier better for them. Kittel, Martin, Terpstra, Jungels all big, strong boys. . .

LottoNl-Jumbo go top at the first check as the Big Unit which is BMC rolls – Phinney, Quinziatto, Oss, King, Dennis. . . And that’s it, all teams on the parcours. 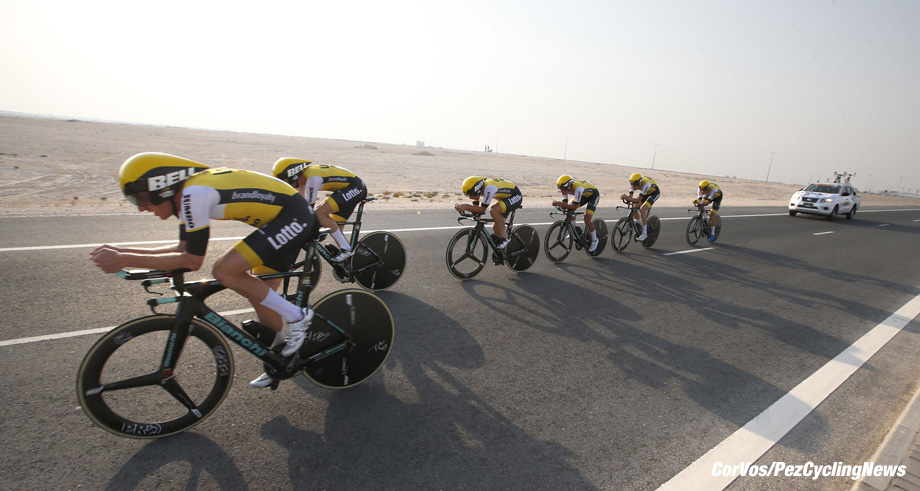 Giant match Lotto at check one as Orica adopt strict line astern into a headwind stretch. Sky approach check one – fastest by seven seconds. Further up the road at check two it’s still Verandas Willems on top. It’s strange to see NO spectators at all beside the road as Van Poppel pops off the Sky train.

AG2R go top at check two as Orica can only manage fourth at check one – that could be strategic but it’s so hard to pull back seconds at these speeds. Katusha blast it into check two, well on top; as Stradalli approach the finish, slower than the winning girls’ time.

Skydive Dubai finish with 48:16 – that’s better. Roosen explodes off the Jumbo line as Etixx take almost six seconds off Sky at check one. Lotto Jumbo demolish Katusha at check two as Vino 4-Ever can’t match the Skydivers on the line but it’s the Israeli team going top, slicing a minute plus off the Dubai Divers. 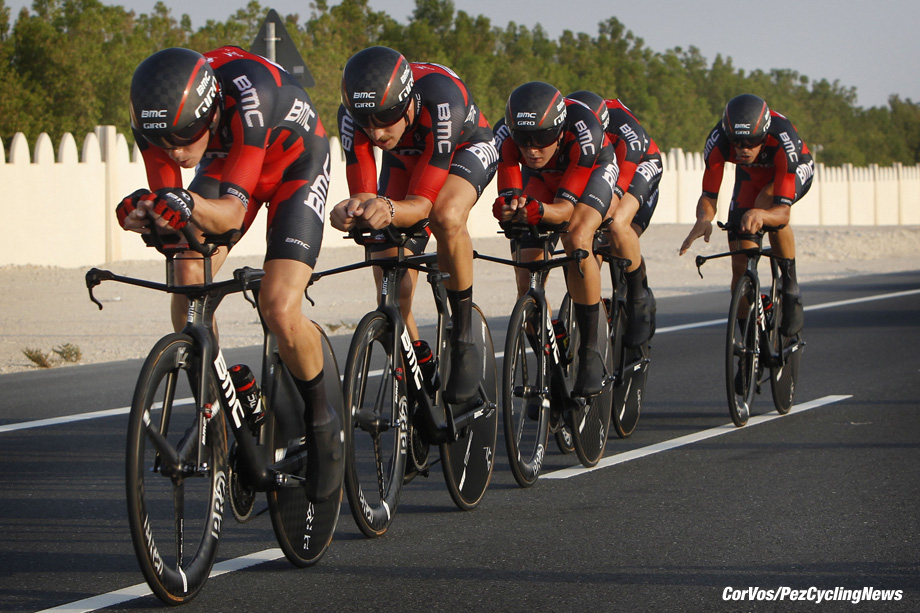 BMC can’t match Etixx at check one, three seconds back. Etixx do look formidable across the tar, very together, strong, disciplined.

Kolss can’t match the Israeli’s on the line – but Willems can, 46:11 tops the board. Sky top check two but not for long as Orica eclipse them; which CCC can’t do to Willems on the line, neither could AG2R – nice ride from the Belgians.

Katusha can though, 44:31 – ‘ciao’ to those Willems boys from the hot seats. It’s not happening for Movistar; but it is for Etixx who rampage through fastest at check two – Astana can’t match Katusha on the line. 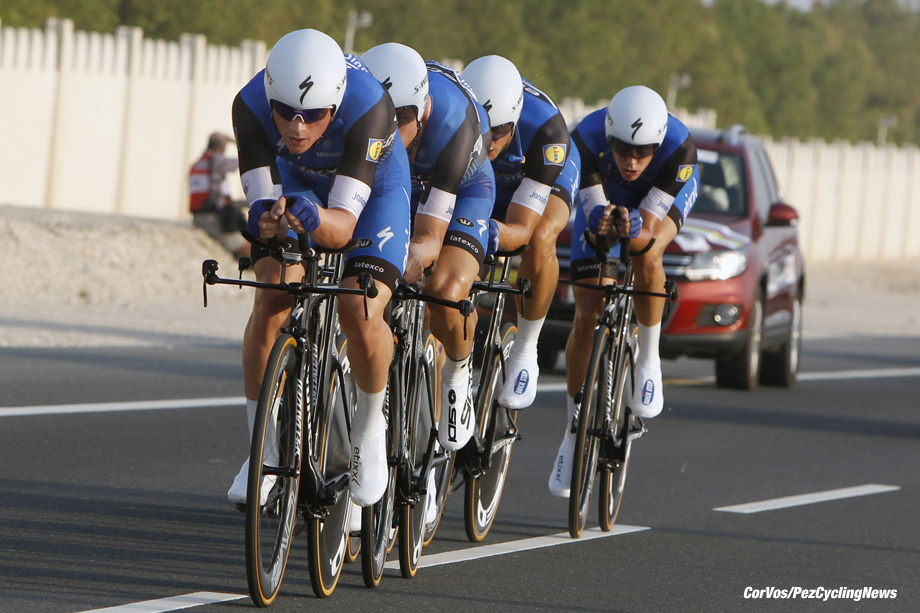 Kwiatkowski melts down out of Sky, just four left. Etixx take the corners into town like kermis kings as Giant fail to match Jumbo Lotto below the gantry. BMC still have six but Vermote blows out of Etixx.

Sky into the finish straight now; they go top by less than a second with 43:26. But for gold it’s BMC v. Etixx, a straight shoot out as both teams take the roundabouts like deranged Moto GP riders – wild. Orica look good they’ve picked it up, 43:09 – warp speed. Durbridge is wasted.

Movistar now to finish but the Spaniards can’t match the Aussies. Etixx will be next, they flash under the red kite. Kittel leads it in from way out – 42:39, 56 plus KPH, that’s Starship Enterprise speed. Can the big Swiss boys do it?

The Etixx boys, whoop, holler, cuddle – they deserve to. Three golds, two silvers and one bronze – the crowned TTT Kings of the world.

And still only five teams have won a medal at his discipline. . .

Keep it PEZ for all the best from the Doha World championships. 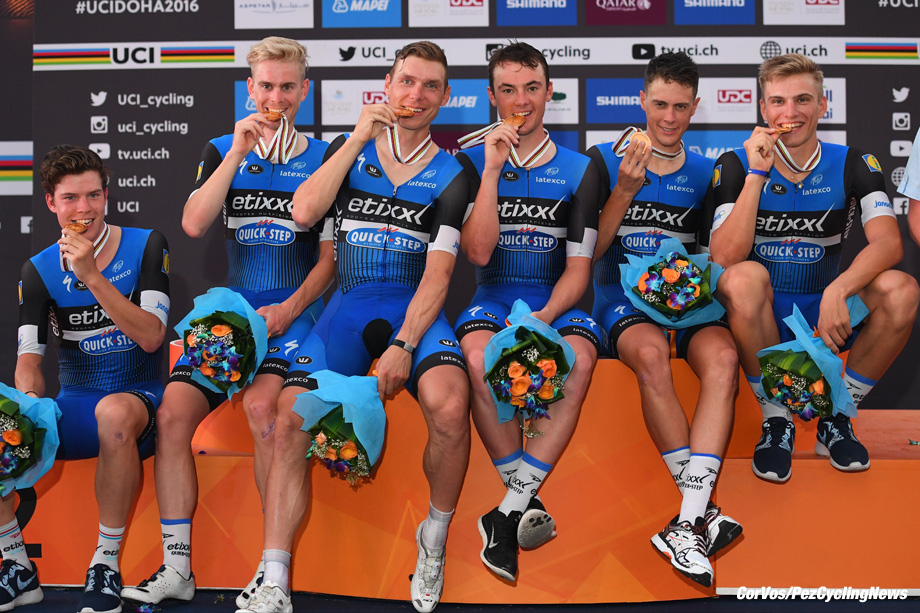