Worlds Team Time Trial Report: On a fine Scandinavian autumn afternoon in Bergen it was Sunweb who bested a technical parcours of 42.5 kilometers, BMC Racing Team and Team Sky to win by eight seconds. Sunweb’s strong finish saw them through as both BMC and Sky weakened on the run for home. Reigning champions Quick-Step could do no better that fourth as Sunweb celebrated a double triumph, having won the ladies’ race in the morning. 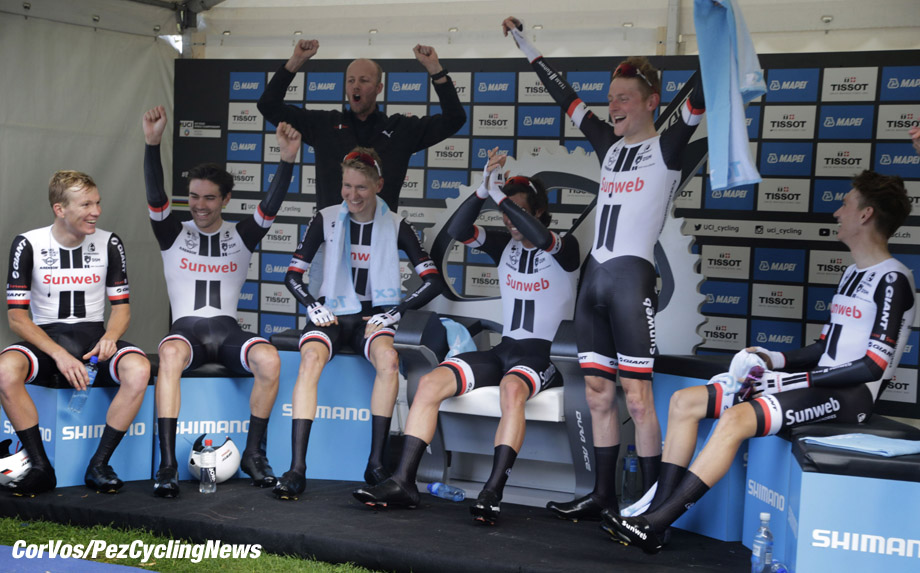 The undisputed kings of the TTT are Quick-Step Floors; never off the podium since the race was instituted in 2012 – three golds, one silver and one bronze. Their big rivals, BMC come second in the rankings with two golds and two silvers. Orica are third with two silvers and two bronzes medals. Team Sky and Movistar have one bronze apiece. These are the only five teams to have won a medal in the discipline.

BMC look like favorites but pride is at stake for Patrick Lefevere’s Belgian team – who will surely miss Tony Martin – whilst Sky have Froome, Kwiatkowski, Kiryienka and Thomas, a hugely powerful line up.
Outsiders? Team Sunweb with big engines, Dumoulin, Kamna and Matthews. 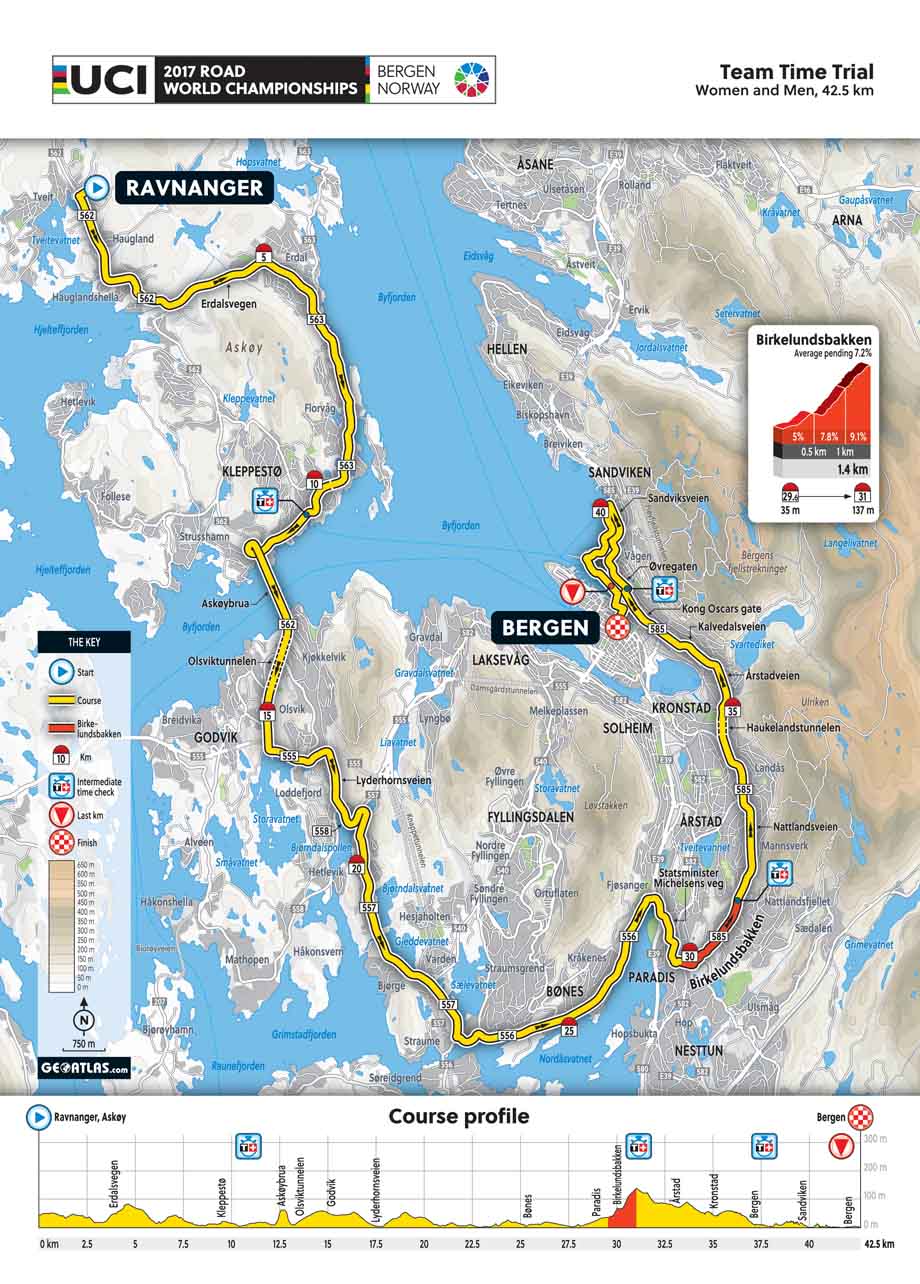 The parcours are challenging, it’s no ‘boulevard blast’ with lots of lumps, bumps up to 9%, bends and even cobbles – which will suit the QuickStep boys who won the race last year thanks to their bike handling skills on the technical run-in. The field isn’t the biggest, many teams balancing the value of TV exposure against the cost of preparing a team properly for the race – and the inevitable pummelling from the ‘Big Five’ squadra mentioned above. First of 17 teams to go is local team ‘Fixit’ with blue clad flooring boys off last and having the benefit of time checks on the rest. 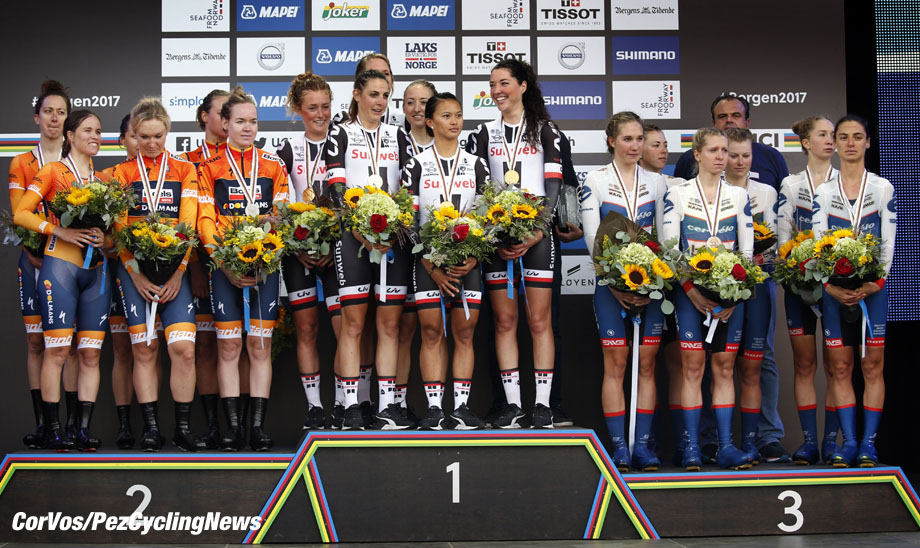 The ladies teams warmed the tarmac for the men with tears and cuddles all round for the Sunweb girls taking gold in 55:41 at 45.8 kph from pre-race favorites, Boels-Dolman and Cervelo-Bigla.

Local boys Fixit line up with the shadows lengthening and flags hanging limp; six men to start, four to count. They’re off and running, nice and smooth, lined nicely – let’s see if they can hold that when the grade goes to 9% today. Another Norwegian team now, Sparebanken; looking pro but cannon fodder on this day. Uno-X Hydrogen are our third local team to go. Then it’s Italy’s Sangemini in red and white – they’re out of the blocks briskly as CCC’s Orangemen have their last drinks before it’s their turn on the ramp.

Out on the course the Fixit boys aren’t looking the smoothest, Sparebanken look better but when the big guns fire these squads will be just a memory. Joker of Norway on the ramp now, they’ve been around a long time and have produced a string of good riders, Boasson-Hagen among them. CCC line up as the cameras go to Uno-X, they’re chugging those pedals – you’ll have to be smoother than that lads. CCC have British 25 mile record holder, Marcin Bialoblocki in their line up, he recently broke his own record taking it down to a ‘short’ 43 minute ride but his time was disallowed due to his riding ‘wide’ and gaining advantage from the draft off passing vehicles. There’ll be no such advantage today with team cars kept back by the commissars. 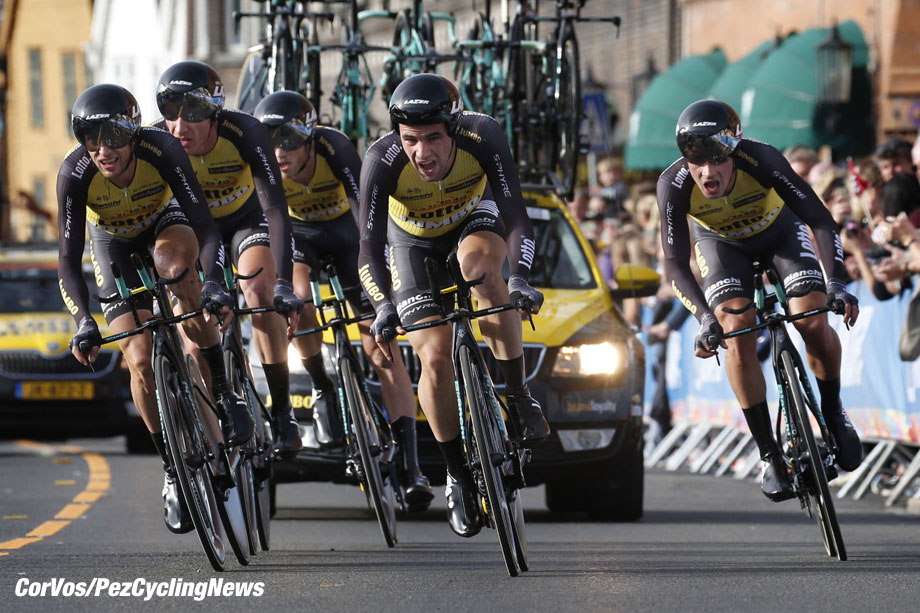 Those baby blue boys of Astana roll, the first of the World Tour teams followed by Team LottoNL-Jumbo, some big chrono names in there, Boom, Campanaerts, Clement, Roglic and Van Emden. Worth watching. Katusha-Alpecin now, with home fave Kristoff and power house Tony Martin – greyhound Michael Mørkøv leads them off. Joker – top at check one and topping 50 kph.

Bora-Hansgrohe line up, mean in black on those Shivs; Barta, Bodnar, Burghardt – all strong boys. Movistar used to be a big name in this discipline, they go next as CCC top 52 kph at check one. Castroviejo and Dowsett are the specialists for the Spanish team; they’re quickly into formation and not messing. Trek-Segafredo’s launch – then it’s the BIG names: Sunweb, Sky, Orica, BMC and Sky. 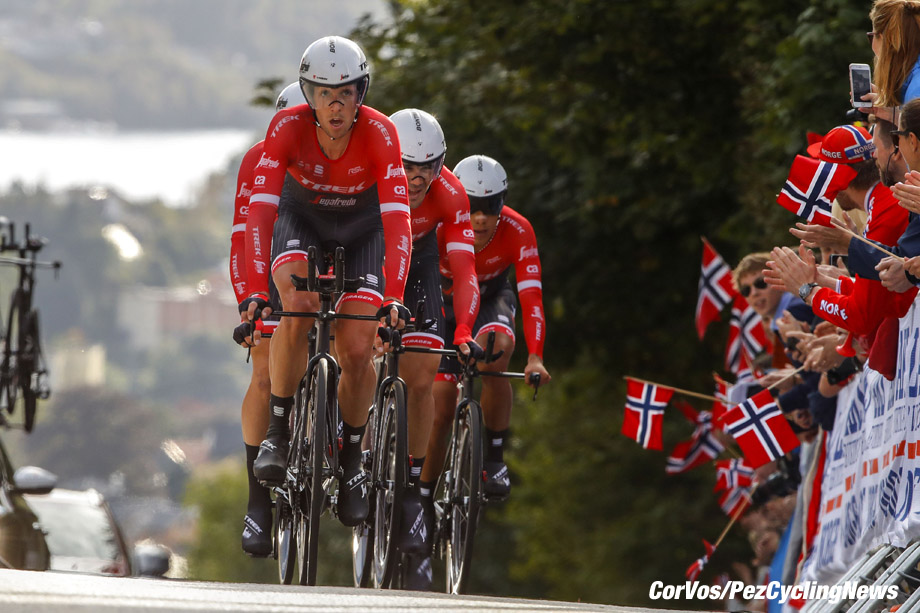 Sunweb; Michael Matthews needs to tuck that hair in to his helmet, hundredths of seconds will be lost with that turbulence. Dumoulin leads them away.

Sky now, nervous, wanting to get out there. . . Kiry leads them off. 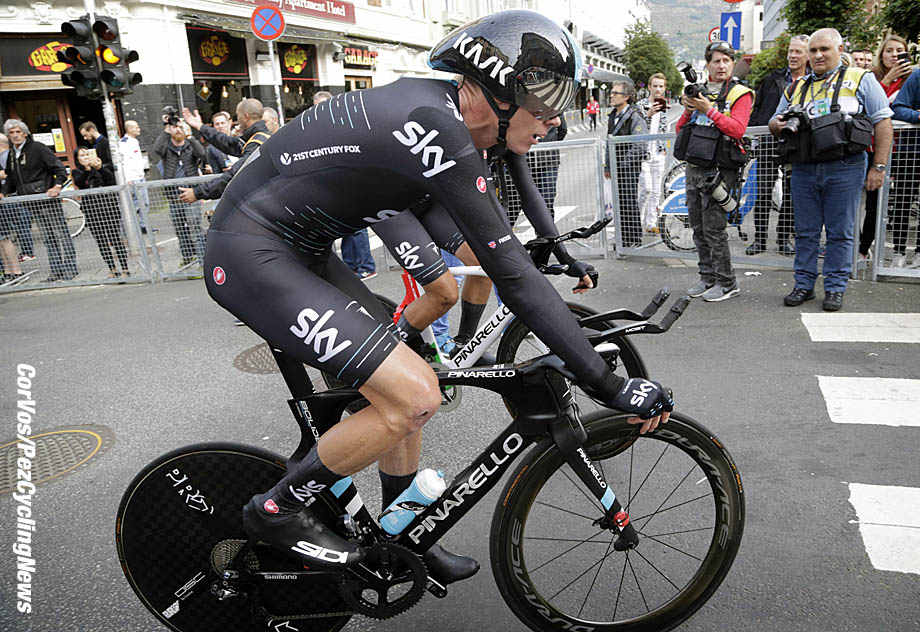 Fixit are on the climb, it hurts but they’re over with five men left. Orica-Scott line up; Tuft, Durbridge, Edmondson – all strong boys in the chrono. LottoNL-Jumbo lead at check one, 53 kph – ouch!

Dennis, Van Garderen, Küng, Dillier, Oss – that’s a lot of firepower for BMC and all aboard those fabulously named ‘Time Machines’. Uno-X got top at check two – that won’t last. Reigning champions – Bauer, Terpstra, Gilbert, Jungels, Gilbert, Vermote line up for Quick-Step as Sunweb go top at check one. Quick-Step are out over the tar, everyone is on the road now – it’s all down to those dastardly stop watches now.

Check two, CCC go top but are down to four with a 49 kph average. Sky look very tidy as they go top at check one, whilst BMC are holding nothing back, full on but down on Sky. LottoNL-Jumbo top check two at 49.7 kph. Quick-Step hit check one just a whisker behind Sky, 1:34 seconds. Sky are still neat, together, looking strong – so too do BMC and Sunweb. Movistar down to five but top at check two as Astana can’t match leaders CCC at the line. 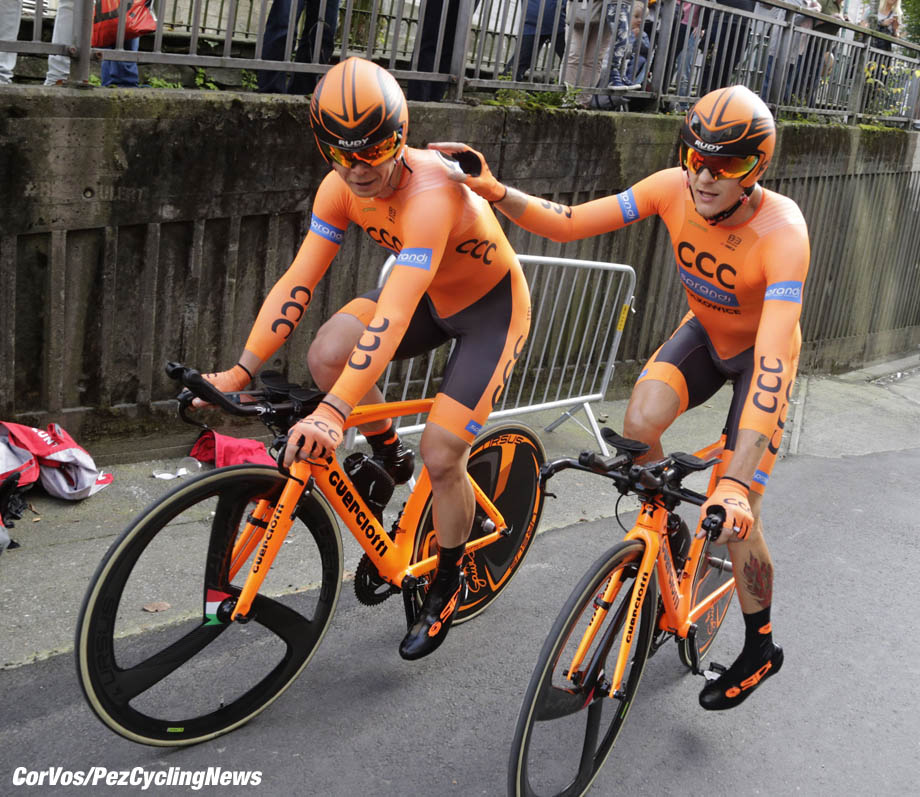 Katusha-Alpecin rattle over the cobbles of Bergen as Hollenstein pops. Sunweb are strong on the climb; meanwhile LottoNl come home top, relegating CCC. Katusha-Alpecin are splitting on the way home but get it back together. Trek are way off the pace at check two. Sunweb depth charge check two – 55 seconds up on Movistar. Katusha can’t match LottoNL-Jumbo at the line but Thomas pops on the climb and Sky are down to four, Doull has gone already, they wait for Thomas – but not for long as Froome gestures to the string, ‘vamoose muchachos!’

And they’re down on Sunweb – hard to see them winning now. Bora miss the LottoNL time at the line. Sky begin to look scrappy with gaps opening. Movistar finish on the same second as LottoNL-Jumbo. It’s academic, Sunweb are roaring home now – six men all present and correct. 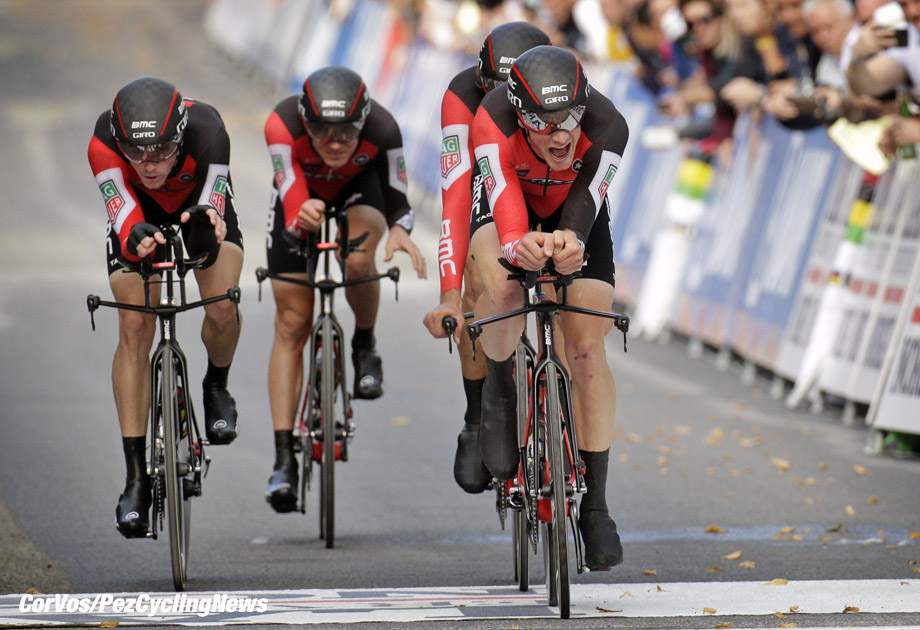 Another silver for BMC

Check two and BMC go top with 51.1 kph, no pause at the top as the big gears clunk in and the speed rockets. Sky look rough now with gaps appearing as the Sunweb express hurtles in on the shirt tails of Trek. 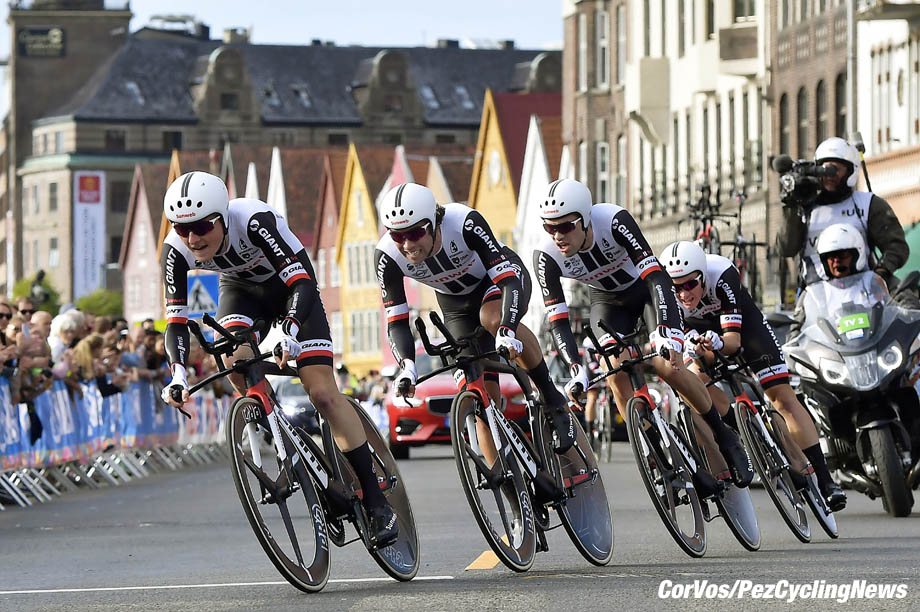 A strong performance from Sunweb

Sunweb thrash home – top by a minute and more with 53.3 kph. Quick-Step are off the pace at check two; can they haul it back on the technical home stretch? Four left for Orica and they’re way off the pace – as Sky come home. BMC are flying, five left with 4.5K left to run – those Time Machines aren’t comfy on those cobbles as Scotson pops, four now and they’re falling apart as Tejay loses the wheel.

The Sunweb boys bite their thumbs on those hot seats as BMC come home – too late! Sunweb!

Quick-Step are off the pace – it’s not going to happen and they’re splitting on the run in too, with just four left. NO medal for Quick-Step – Sunweb win from BMC and Team Sky. 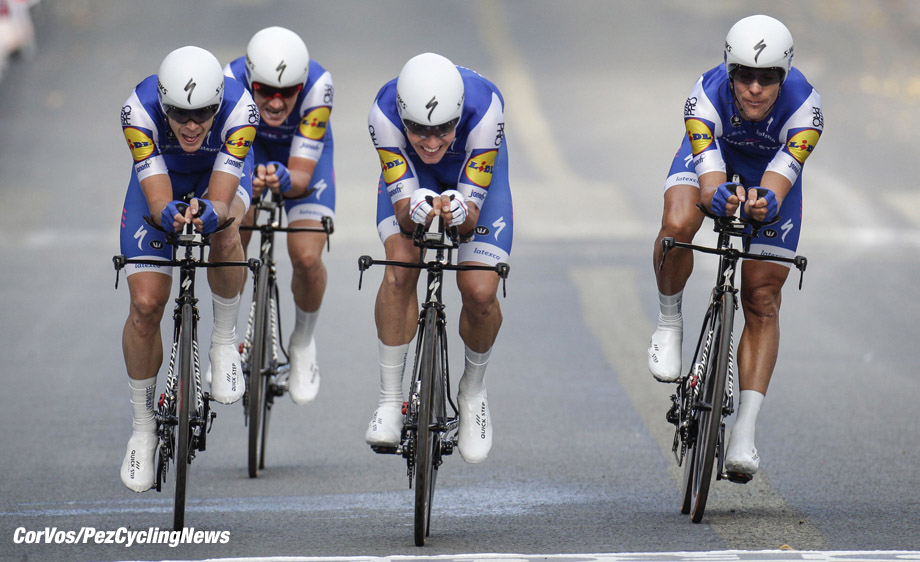 Quick-Step Floors couldn’t get on the podium

The favorites humbled, new men at the top – never a bad thing. Elite Individual Time Test on Wednesday – I’m looking forward to it already. Keep it PEZ for all the news from Bergen. 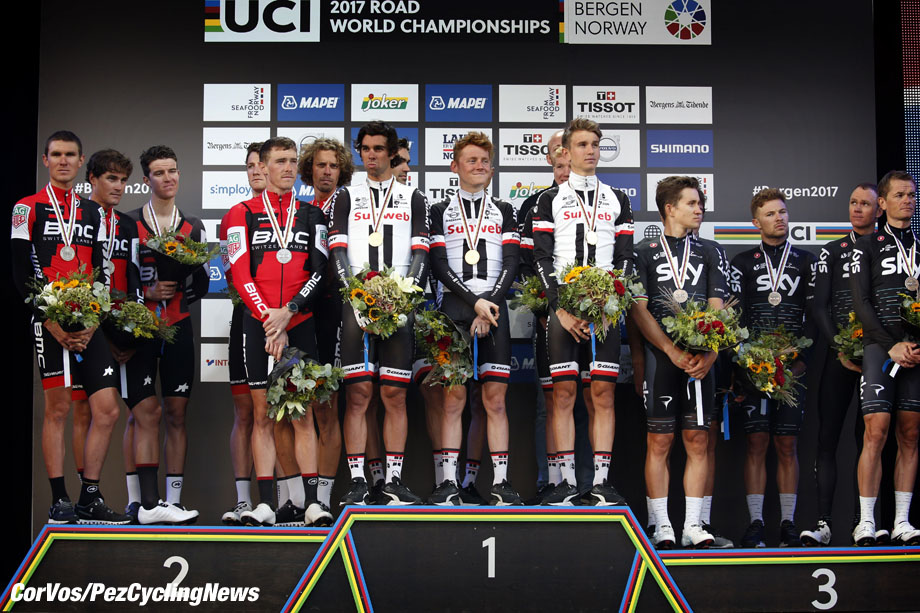