The Vuelta’s a wrap and there’s barely enough time for another glass of sangria before the World Championships start Wednesday in Madrid. The Sprinters’ teams are lining up for what’s expected to be a fast race.

Spanish Name Final Nine
Spanish national selector Francisco Antequera finalised his nine riders for the World Championships road race over the weekend. There has been some doubt who would take the final place, but Antequera named the Galician rider David Blanco (Comunidad Valenciana) as the ninth rider on Saturday night. “He is the rider who has shown most form in the last few days of the Vuelta and that is the reason I have chosen him”, commented Antequera. Blanco took a couple of top five finishes in stages in the Vuelta this year and finished 13th overall and will join Igor Astarloa (Barloworld), Alexander Valverde (Illes Balears), Miguel Angel Martнn Perdiguero (Phonak), Juan Antonio Flecha (Fassa Bortolo), Francisco Mancebo (Illes Balears), Marcos Serrano (Liberty Seguros), Tino Zaballa (Saunier Duval) and Oscar Pereiro (Phonak) to complete the Spanish team. Six of these riders rode in last years championships in Verona (Astarloa, Valverde, Flecha, Mancebo, Serrano and Zaballa) while Martin Perdiguero returns to the team after an absence of four years. Pereiro and Blanco will be first time competitors in the Worlds road race. Ivбn Gutiйrrez (Illes Balears) and Rubйn Plaza (Comunidad Valenciana) will be the Spanish representatives in the time trial. 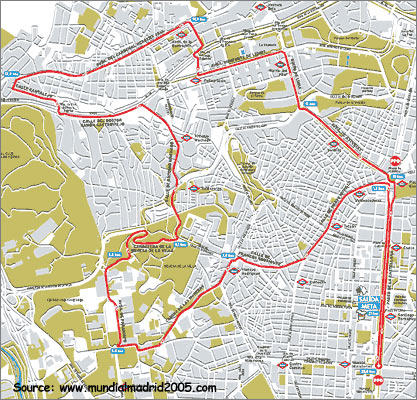 The Men’s Road Race covers 273 km, through Madrid on Sunday.

Petacchi Leads Italians
Italian selector Franco Ballerini has announced the 13 riders who will represent Italy in the Mens Elite races in Madrid. The Italians clearly think that the road race will end in sprint finish as they have Alessandro Petacchi as the team leader. Paolo Bettini will be the secondary leader. The squad is divided into riders who work for Petacchi at Fassa Bortolo (Velo, Bernucci, Tosatto) and those who assist Bettini at Quick Step (Pozzato, Paolini and Bramati). “It has been a difficult selection for me, I have had to eliminate some good riders in order to include those who will work for the team”, said Ballerini, who has also called up veteran sprinter Giovanni Lombardi, the 36 year old from CSC knows the Madrid circuit very well as he lives in the Spanish capital. Ballerini has also included the late season sensation Daniele Bennati (Lampre-Caffita) who took three stages in the Deutschland Tour and two in this weeks Tour of Poland. Ballerini again stated that he is not happy with the UCI’s decision to reduce the squad size of the main cycling countries to nine riders thus making it more difficult for countries such as Italy, Australia, Belgium and Germany, who have great sprinters, to control the race.

Expect the sprinters’ trains to battle it out in a fast race on the mostly flat parcours.

Wesemann To Ride Worlds As A Swiss
Steffen Wesemann celebrates the 5th Anniversary of his marriage to his wife today, as well as picking up his newly approved citizenship to Switzerland. The German-born Classics specialist has been actively seeking citizenship to Switzerland for awhile, but only now received it, and apparently just in time for this weekend’s World Championship Road Race where he will co-captain the Swiss team with Fabian Cancellara.

Wesemann has firmly targeted the World Championships: “Fabian Cancellara and I are the captains, and if it doesn’t come down to a mass sprint, we’ll have a good chance.”

Wesemann rode the Tour of Poland as a final tune-up for the Worlds. After the longest stage of 224 km, Wesemann continued on for another 30 km of motorpacing, which impressed Swiss National Team Coach, Rene Savary: “Wesemann is preparing very seriously.”

Wesemann left the Tour of Poland early when the ridiculous weather of the last few stages hit – hail, freezing rain, wind, etc. He returned back to Switzerland with new teammate, Cancellara for some more humane training.

American Team For Worlds
Courtesy of USA Cycling: USA Cycling announced on Saturday the riders that will represent the United States at the 2005 UCI Road World Championships in Madrid, Spain September 21-25. A total of 21 riders in three categories – elite and U23 men and elite women – will compete for the title of world champion in road race and time trial events.

Headlining the list of elite men is 2004 Olympic time trial bronze medalist Bobby Julich (Glenwood Springs, Colo.) who will be gunning for a rainbow jersey in the elite men’s time trial on September 22. One of the top time trial riders in the world, Julich captured major time trial wins this season at the Tour of Benelux and Criterium International and placed fourth in the 55 kilometer time trial at the Tour de France.

Tyler Farrar (Wenatchee, Wash.) leads the five-man U23 team. The recent winner of the USPRO Criterium Championships and a stage of the Tour de l’Avenir, Farrar will look to excel on a relatively flat course tailor made for a sprint specialist. Joining Farrar on the U23 list is national time trial champion Steven Cozza (Petaluma, Calif.), John Devine (Colorado Springs, Colo.), John Murphy (Marietta, Ga.) and Michael Wolf (Decatur, Ga.).

It’s impossible to know what criteria are used for selecting the U23 Team, but the TIAA-CREF squad has to feel a lot more than slighted. Two-time U23 National Champion, Ian MacGregor was once again not selected, not to mention a plethora of other possible candidates from TIAA-CREF.

Several of the riders who originally received automatic nominations declined to participate.

More news to come as we get it – so stay tuned.