PEZ Introduces our Readers’ Rigs column showcasing the bikes of the loyal readers and fans of PezCyclingNews.com. So what’s a reader’s rig? It could be anything from a $500 special to a $15,000 dream machine – it’s not the price of the bike that’s important but the story behind the bike. Let’s face it, who hasn’t participated in a bit of voyeurism in your local group ride? How often in life can you ogle another man or woman’s loved ones, touch them and even ride them if you’re lucky? So it was with this voyeuristic attitude that the new Readers’ Rigs column was born.

Here at Pez we’re all about interaction with the fans, whether it be by putting you in our shoes through our roadside reports or even handing over the reporting duties to you for a topride or race viewing of your own. Our new updated Facebook page has been able to step up that interaction a bit more with some great fan likes and comments and one popular idea was the creation of a Reader’s Rigs column.

As a longtime Pez writer and new Facebook editor it was my job to kick the column off so here’s the story of me and my pride and joy, ‘Bitsa’. 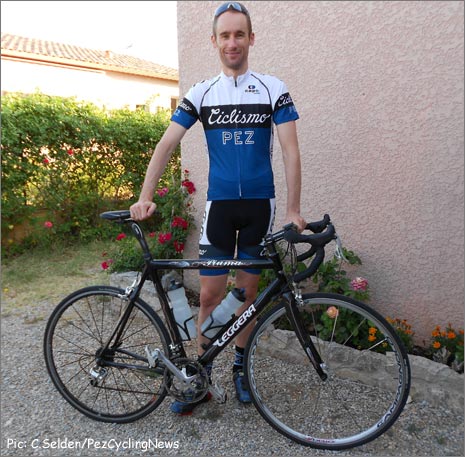 When did you buy it? I bought the frame back in about 2005 or 2006 in Australia after I cracked the frame on my old team bike and transferred the components and wheels across. At the time I was running nine speed Dura Ace from 2003 and Mavic Kysrium wheels but much has changed since then.

What made you choose this bike? As I had numerous sets of wheels and a full Dura Ace groupset I only wanted a frame so that immediately cut down my options at the local bikeshop. I’d heard good things of Leggera which was at the time a Gold Coast (Australia) run company importing high end carbon bikes from China. The frame itself was super light, weighing in at just under 1kg and in my first ride I found it stiff and responsive and was pleasantly surprised by its performance.

What modifications/additions have you done? I’ve changed nothing in terms of frame, fork and seatpost since purchased but almost everything else has been changed. Due to moving country from Australia to France and the subsequent enormous amounts that airlines charge for excess baggage I decided to simply import my frame and forks with me in a simple cardboard box that weighed less than 2kgs with padding which left me with no excess baggage to pay. I also then had the small problem of no bike to ride at the other end though!

Luckily I had a good network of friends, family and shops with cheap parts that got me back on the road for very little money even if my once full Dura Ace equipped bike has now turned into a ‘Bitsa’. Bits from here, bits from there and voila – a complete bike! 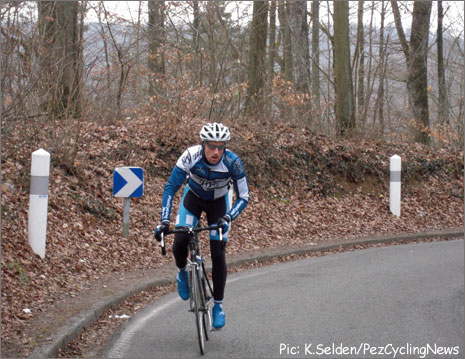 Off the plane from sunny Australia I was greeted with 2 problems, Firstly I had only a frame and 2nd where’s the sun gone? Here I am at Paris Nice this year where I managed to solve one of the problems….

What components are you running? I probably have one of the more unusual setups going around but it works ok with a combination of Campagnolo Daytona 10 speed shifters from 2002 (Daytona doesn’t exist anymore), Campag Centaur rear derailleur (2007), Dura Ace front derailleur, Dura Ace brakes, Dura Ace cranks (all 2003), Centaur chain and cogs (11-23) and FSA chainrings (39×53). Yes, it’s a bitsa! Completing the package are a CKT carbon handlebar setup with a Ritchey stem which is affectionately referred to by my riding mates as my ‘Potence de Papi’ or ‘Grandfather Stem’ due to its upright angle giving me a very high, relaxed ‘cycle tourist’ position on the bike. Gone are my racing days with a long flat stem slammed low – here are the days of bad backs and sore shoulders from previous injuries – hence my grandfather stem. 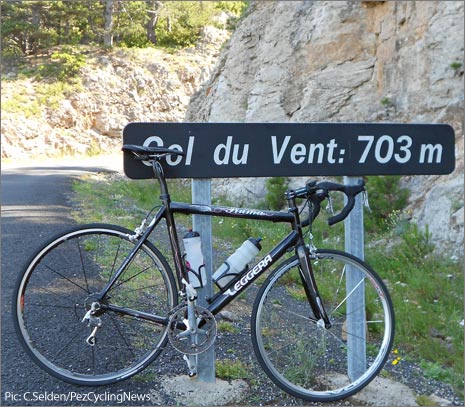 As an ex-racer I’m highly embarassed by the look of my grandfather stem……but at least with it I can ride pain free!

How many miles/kilometers do you do per year? Since stopping competitive racing at the end of 2004 my yearly totals have varied from 1500km to 10000kms depending upon mood, workloads, weather and motivation. I’m happy to say that this year’s total should be at the top end of that bracket though.

Favorite riding area? I’ve been lucky enough to ride and race in numerous countries around the world but I think my favorite area is my new region where I now live in the South of France, the Herault Valley . The hills never stop, the scenery is simply spectacular and best of all, there is very little traffic. 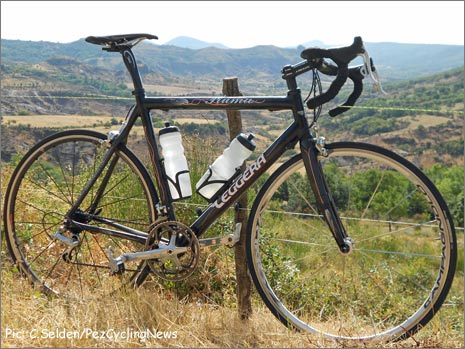 Favorite riding experience on your bike? Living in France I’ve been able to do many of the mythic Tour de France climbs on this bike and each time I do them I find new respect for the pros that have to do them day in day out during the race. Normally after one or two days in the mountains I’m exhausted for a week.

Future upgrades? Ideally I’d like to get a totally new bike but I think realistically my next upgrade would be a new set of wheels. It’s a been while since I’ve ridden on a really nice set of wheels and as much as I’d like a deep set of carbon rims, more appropriate for my windy and hilly region would be something like the American Classic 420 aero wheels, probably in black just because I like the classic look.

My current mismatch setup of one silver wheel and one black lower end wheel is a bit embarrassing, especially when I line up on my Sunday morning group ride next to guys with 10,000 Euro machines and full carbon deep dish wheels. For the moment though it’s me who’s having the last laugh when the wind picks up to 100+kph as has occurred recently! I’d also like to maybe get a GPS of some sort to stop myself getting lost as I continue to discover my new region so perhaps that should come before the wheels… 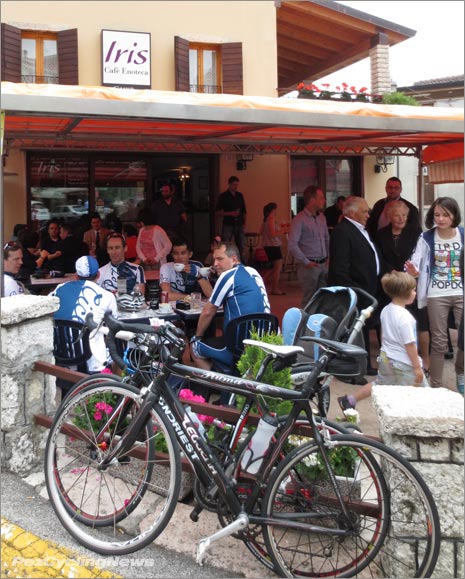 Last words? It may not be the prettiest bike with its part’s bin mix and match look but it works well and I’ve been very happy with it for the last 6 or so years. Still when I look at all the other beautiful bikes out there I do start to dream a bit though. Maybe ‘bitsa’ could become my winter bike soon.

For even more fun come over to our new look Facebook page .
Like PEZ? Why not subscribe to our weekly newsletter to receive updates and reminders on what's cool in road cycling?

Worlds de PEZ: On The Ground For The Road Races!