From the woods of Hong Kong, Pez fan Ed sent us in this story of his custom Colossi XCR that has clocked up miles in a number of different countries and has even had a respray or two…it’s Readers’ Rigs time from South East Asia! 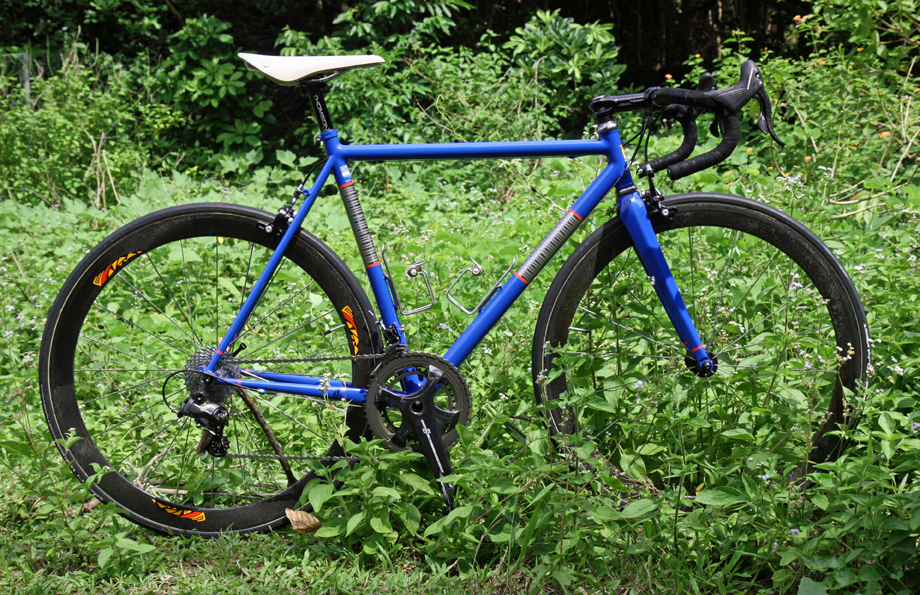 When did you buy it?
The frame was originally built to my custom spec. after visiting the Colossi factory in Shenzhen, China, back in 2010 and has been through a few iterations since. This is the second re-spray / repair. 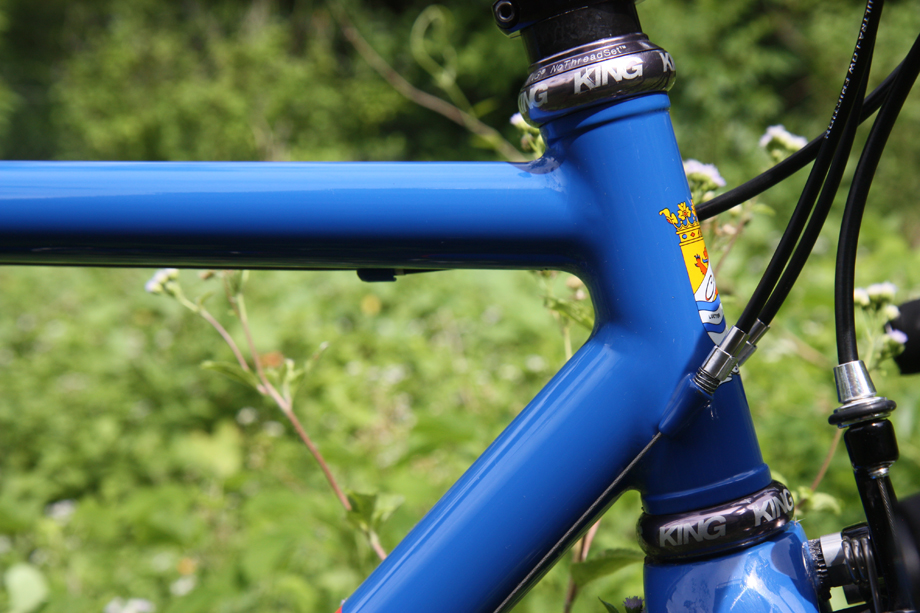 What made you choose this bike?
After discussing the merits of various tubesets with Jan at Colossi prior to choosing this frame it seemed like the perfect mix of old school steel ride quality in a modern package.

What modifications/additions have you done?
The frame was originally raw stainless steel, which was a very nice look, but after denting the top tube and getting the frame repaired with a new tube I felt like a change, so I went for a black / raw mix. Second time out on the re-spray, after adding some rack mounts I went for blue paint with a few red highlights offset against a raw/ brushed ‘bar code’ inspired graphic that I drew up . 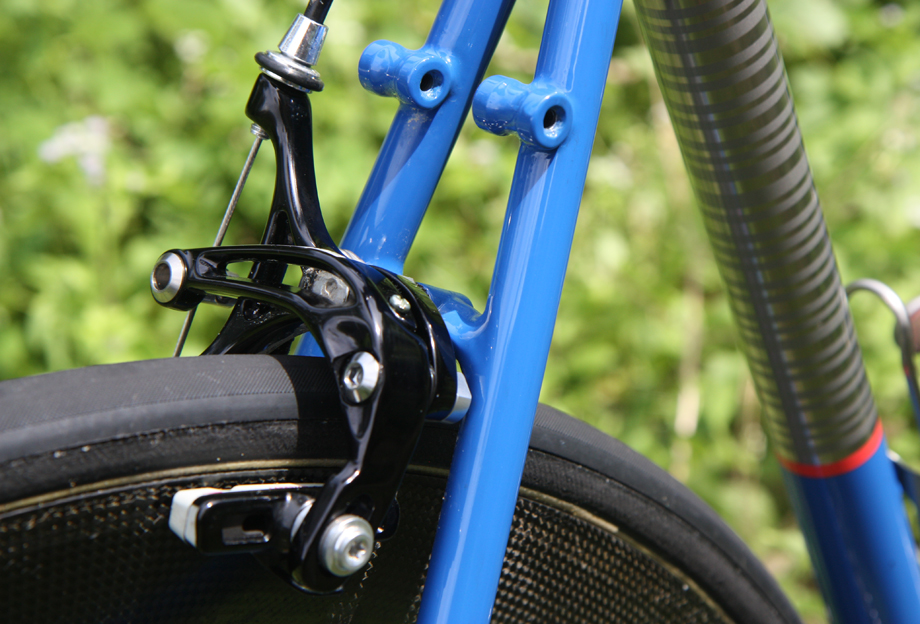 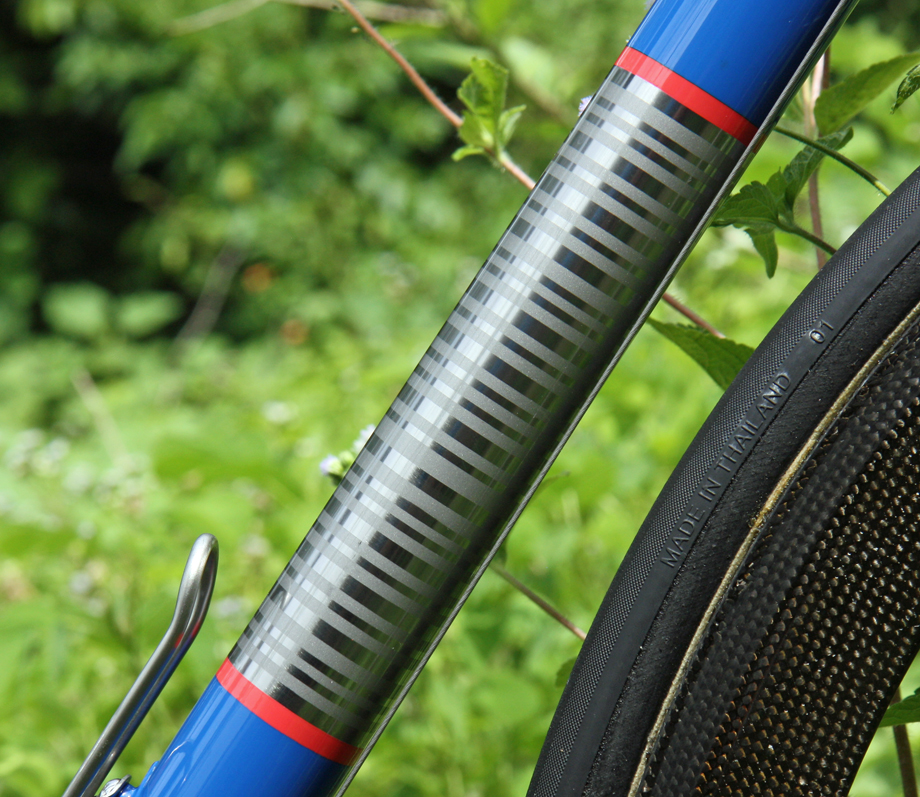 What components are you running?
I originally built this frame with Record 10, which is still a groupset I love and have running on another bike, but after this frame came back looking so good I thought it deserved a new Chorus 11 to freshen things up. I really wasn’t sure how the new 4 arm cranks would work with such a traditional looking frame, but on balance I’m happy with the old meets new look (and secretly that 36 tooth chainring is a little kinder on the knees…) 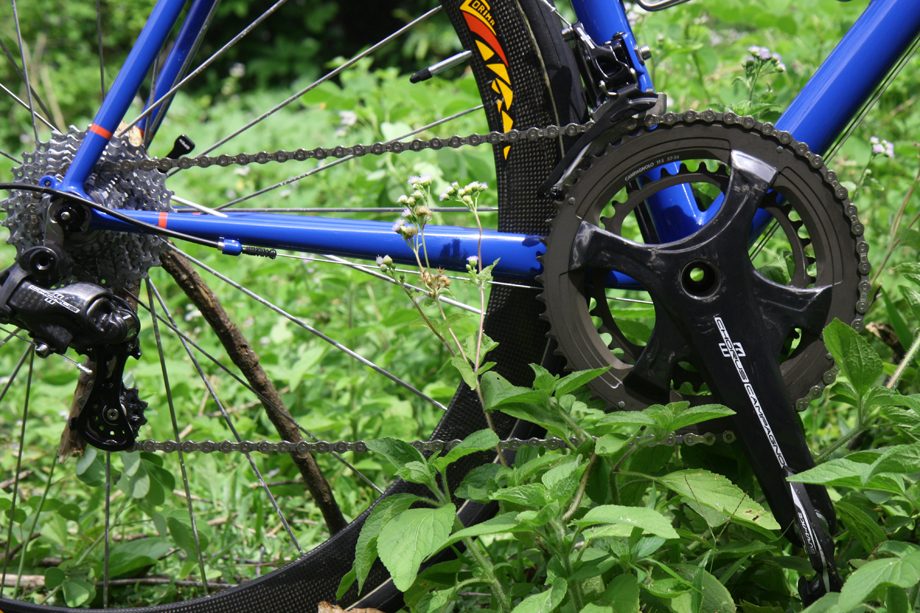 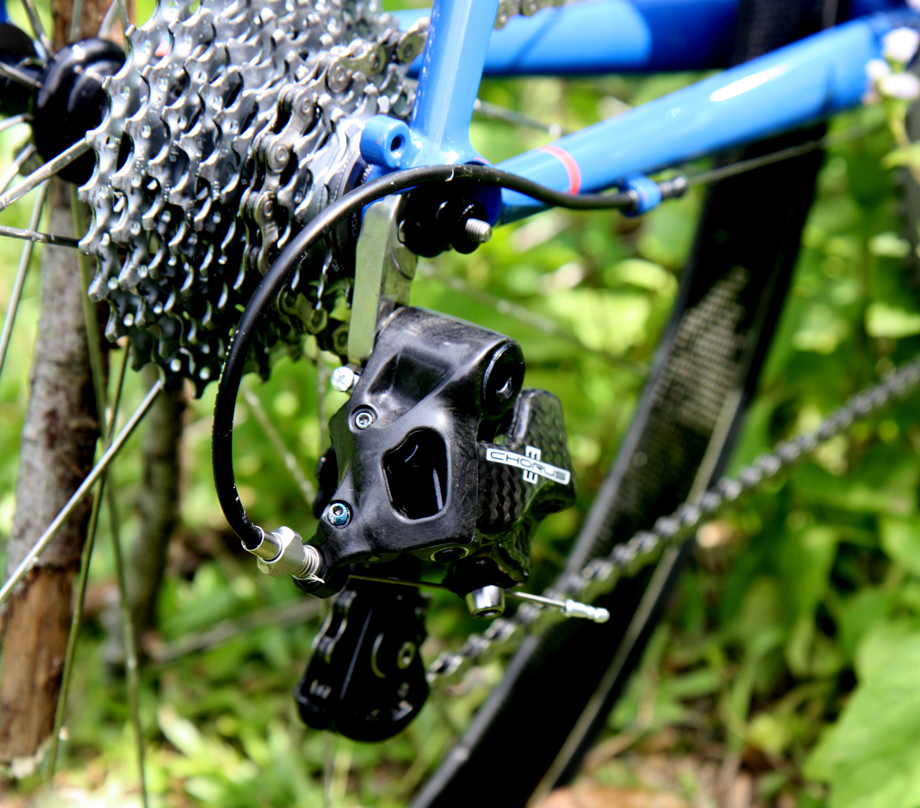 How many miles/kilometers do you do a year?
Living in hilly Hong Kong the kilometers don’t come so easy as there is very little in the way of flat roads, but around 5k to 7.5k including a fair bit of off road is reasonable. 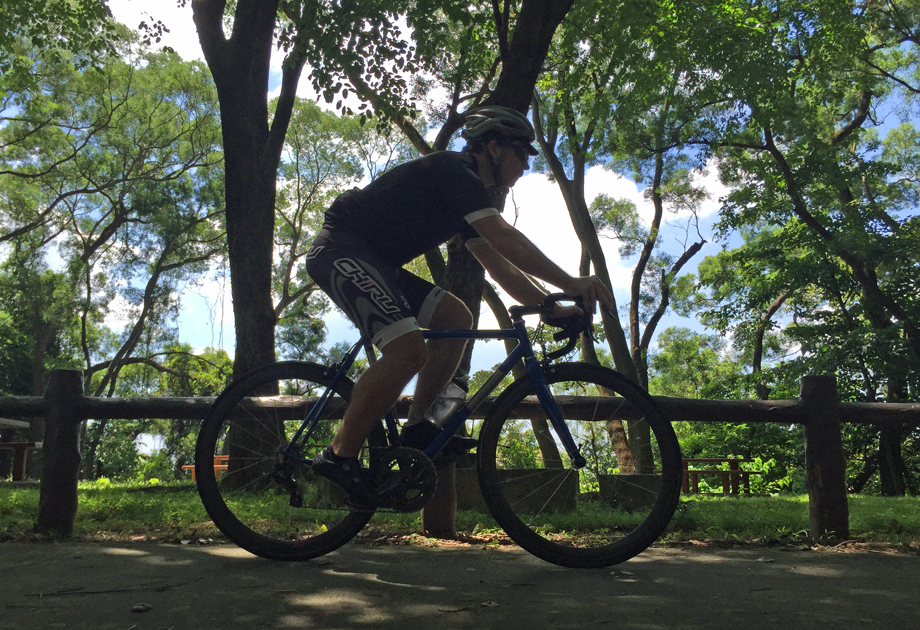 What do you love about this bike?
It’s a very ‘involved’ ride in a way that most bikes just aren’t. You feel connected with the road surface without getting beaten up as you often do with a carbon or aluminium frame. Of course, the fact it is exactly to my specifications in terms of geometry and paint makes this a truly unique bike. 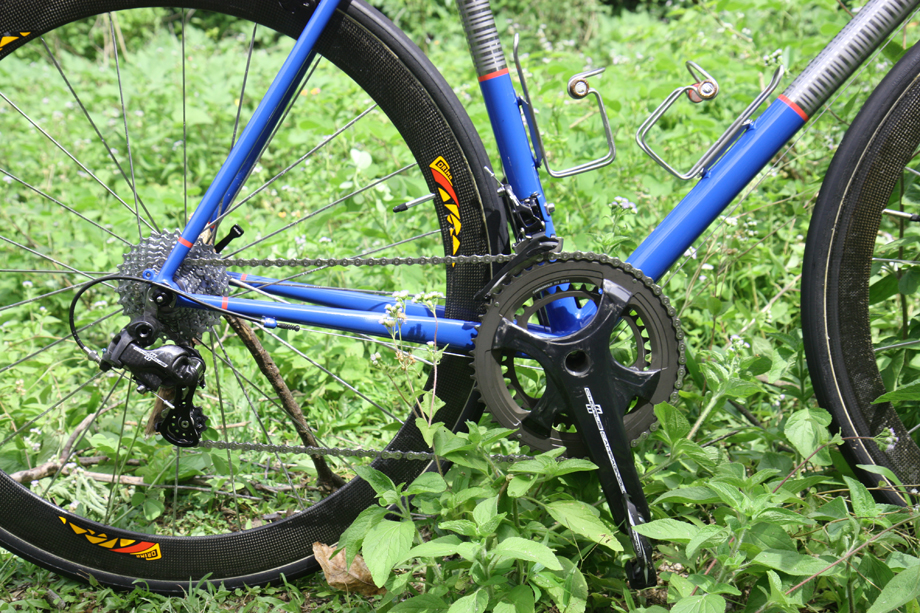 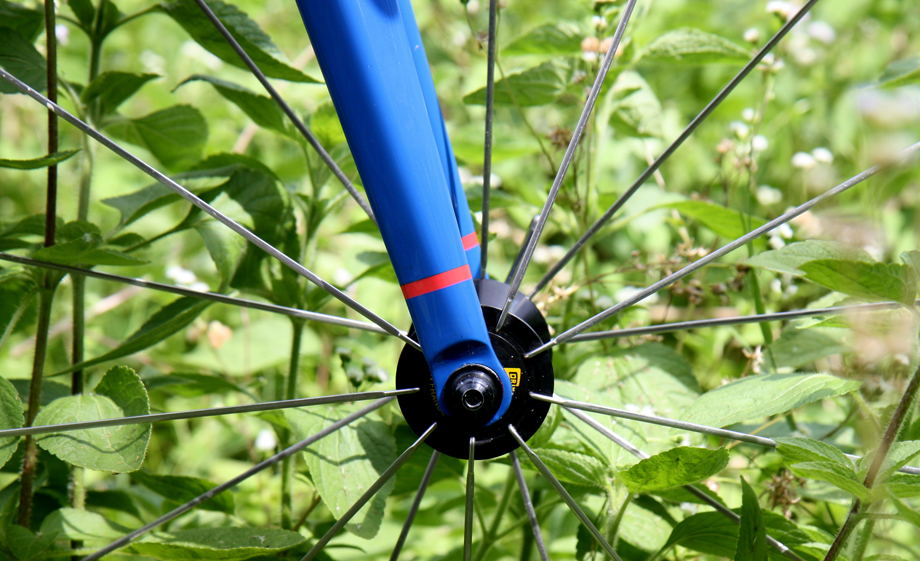 Favorite riding area?
This is a tough question to answer- within SE Asia there are some fantastic mountain ranges that don’t get the publicity of most American / European areas. Taiwan has some amazing roads (the descent into Taroko gauge goes on for hours), as does Malaysia (Cameron highlands must be one of the nicest climbs?) and Thailand (Chaing Mai has really impressed). Within Hong Kong we are blessed to have some great roads very accessible from the city and South Lantau, where we recently moved, is a fantastic back yard that few would associate with one of the densest urban populations in the world. 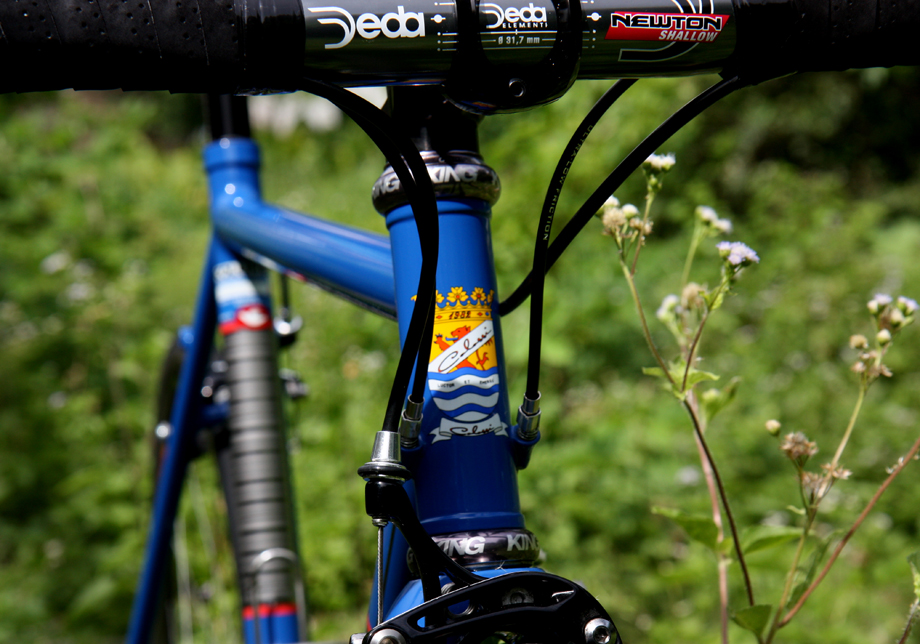 Favorite riding experience on your bike?
Before this most recent build probably the most fun I had on this bike was the various trips up into Mainland China- it’s always an adventure up there as you never know whether the roads will really exist or not. One minute you can be ripping the sump off your driver’s car with massive rocks, the next you can be descending beautiful curves down into deserted valleys on pristine tarmac. 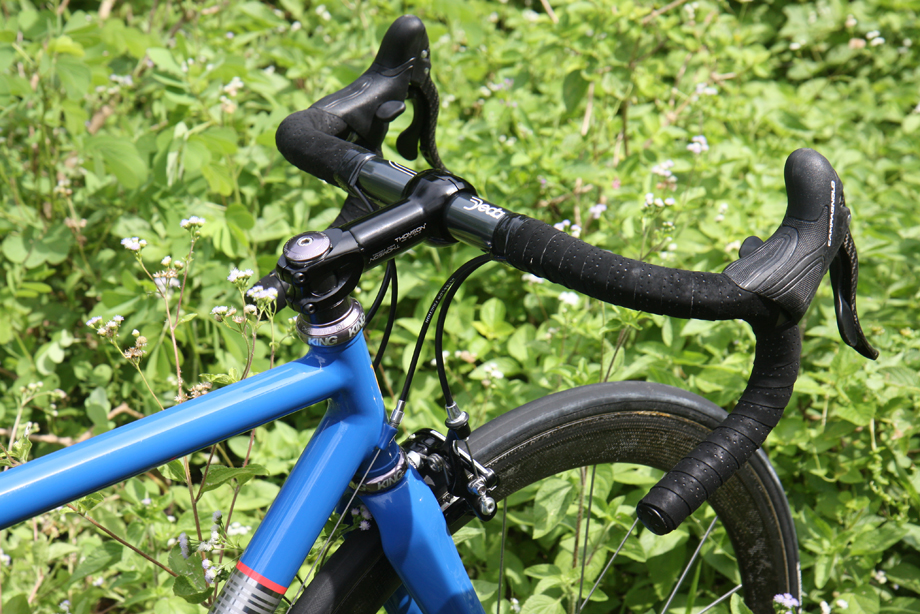 Future upgrades?
I’m happy with this bike as it is, but I know that bike parts wear out and as such it will continue to evolve. I don’t really think of my bikes in terms of ‘upgrades’, I think of them more as machines that evolve over time that may eventually require ‘retiring’. The frame itself is fairly timeless and I’m not too worried about disc brakes or electronic shifting. 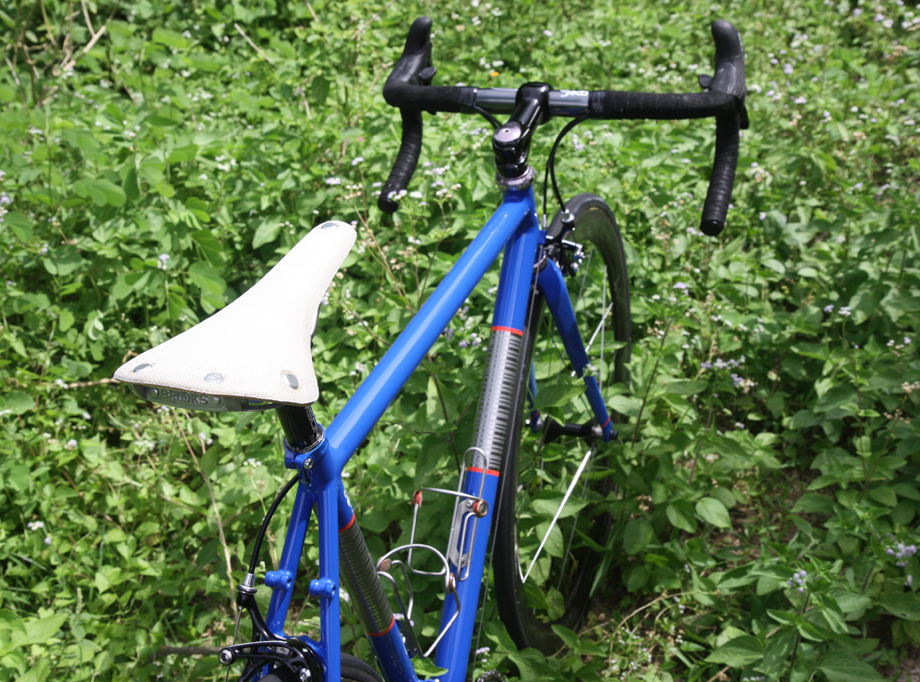 Thanks to Ed for sharing his ride with us. Got a bike that you’re proud of? Well how about sharing it with fellow PEZ fans and getting it featured in Readers’ Rigs so we can all stare at it! Send us a Readers’ Rigs submission direct to [email protected] and your bike could be featured in all its glory here on the pages of PEZ.