Today in Readers’ Rigs we have a two for one special with two friends that go way back in cycling. They’ve shared many experiences on the road including completing the RAAM together in 1992 on Hollands custom steel rigs. Their love of their Hollands continues today with both still riding Hollands bikes – although they’re two quite different machines. 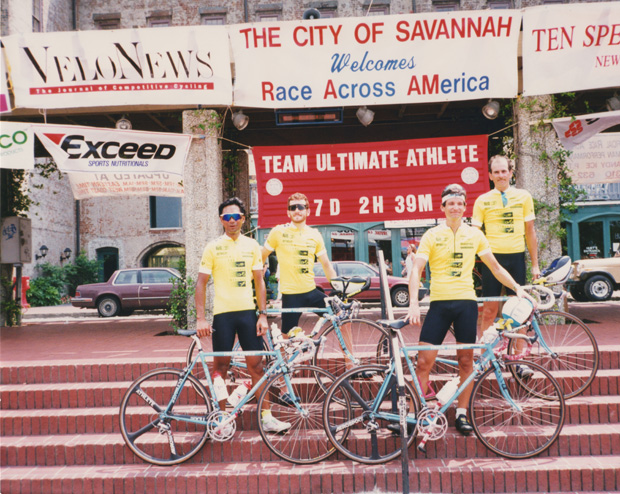 Our Readers featured today at the finish of the 1992 RAAM in Savannah, GA. Left-to-right: Reader No.1 Chuck, Dave Casio, Reader No.2: Sam, and Paul Casio. All with their baby blue Hollands bikes that were built by John Hollands for the race. 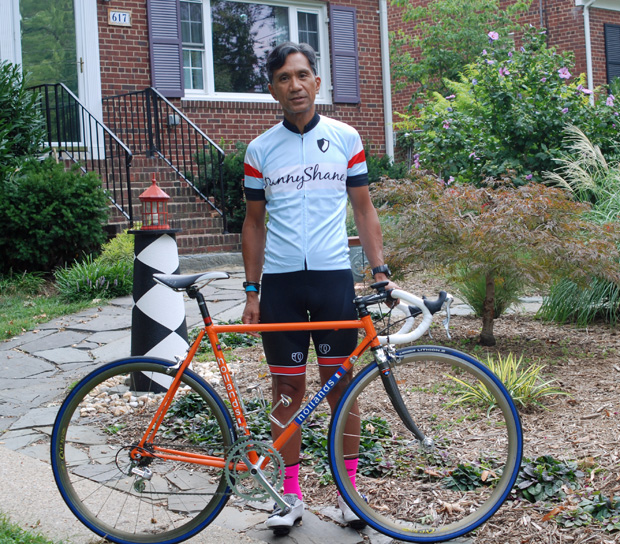 When did you buy it?
John Hollands built the frame for me in 1990

What made you choose this bike?
About the time I was thinking about getting a new bike to replace my Trek 560 Pro Series (Reynolds 531), I read about John Hollands in a local cycling publication. Instead of an off-the-rack bike, getting something built actually made sense. Price-wise, it wasn’t any more expensive than any of the other high end bikes I was looking at (mostly Italian frames). More importantly, it turned out that I actually “needed” a custom frame because of my body measurements. For my height, I have a long torso and reach so need a longer top tube. Back then, most frames were being built on a crit geometry and the ones in my size all had shorter top tubes. Plus instead of a crit geometry I could have the frame built to a slightly more relaxed and stable stage race geometry that you would’ve found in the pro peloton in the late 80s and early 90s. 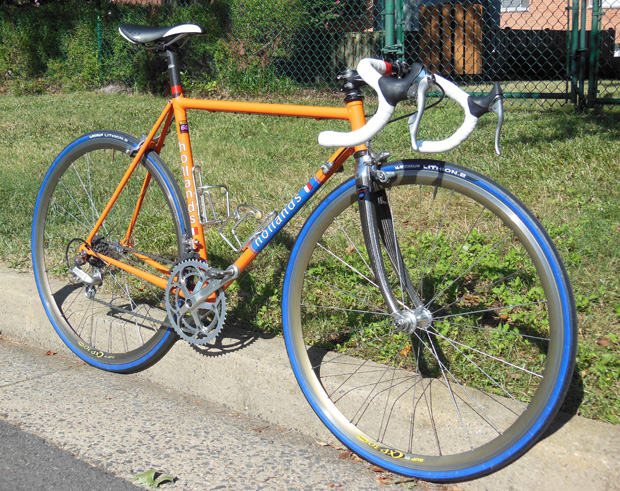 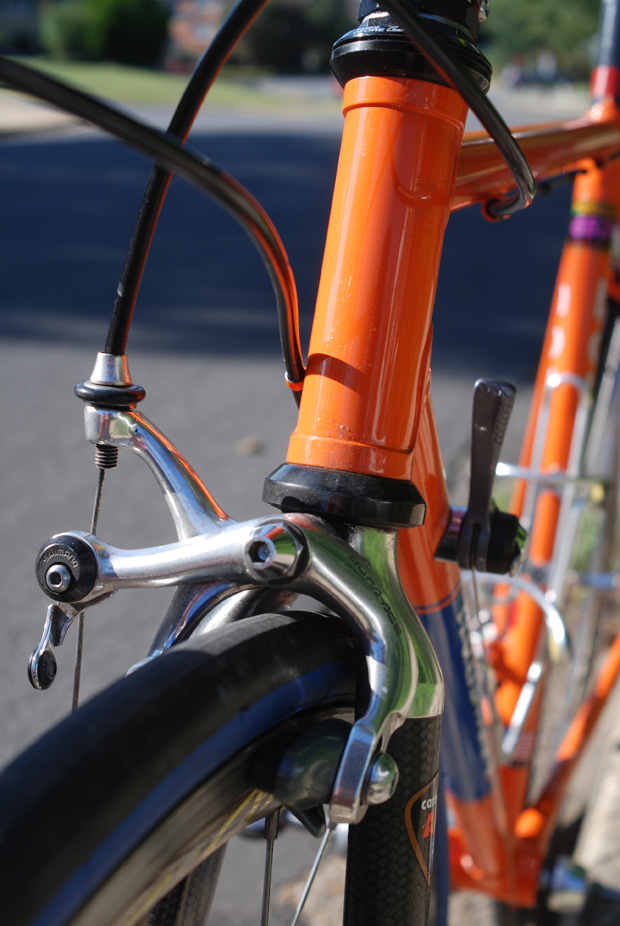 What modifications/additions have you done?
When I first built this bike, it was with a full Shimano Dura Ace 7401 7-speed gruppo with downtube shifters and a pair of Mavic GEL280 tubulars I built that I trained and raced on. And it had a then fashionable late 80s/early 90s magenta/black/white splatter/fade paint job. When I stopped racing in the mid-90s, I had the frame re-painted Molteni-esque (my homage to Eddy Merckx), replaced the steel fork with a carbon fiber one, replaced the DA headset (which was pitted) with a Shimano Deore LX mountain bike headset (figuring it would just be sturdier), swapped the rear downtube shifter for STI (my homage to Andy Hampsten’s 1992 Alpe D’Huez stage win) to go to 8-speeds (but was able to use the DA RD-7401 7-speed rear derailleur), and went over to clinchers when I built the Mavic CXP30 wheels. 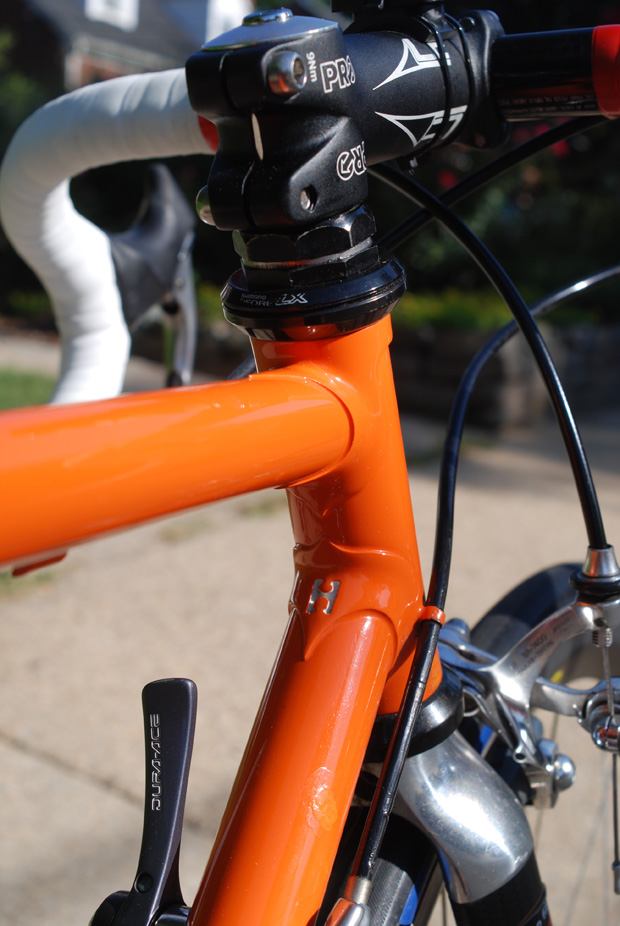 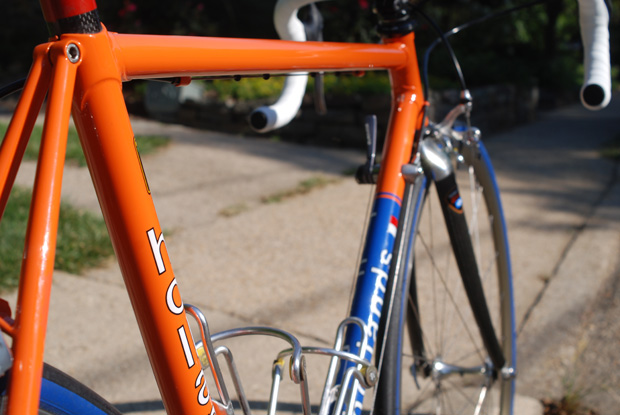 Since then (more than 15 years ago), my more recent mods have been to replace the DA alloy seatpost with a carbon fiber one, a Fi’zi:k Aliante saddle that is like an upgraded version of my old (original) Selle Italia Flite Titanium, and a threaded-to-threadless stem adapter to replace my quill stem to be able to use a “modern” stem with my old 25.4mm clamp diameter ITM handlebars.

What components are you running?
It’s a mix of old and new. Most of the drivetrain is the original Shimano Dura Ace 7-speed components: front and rear derailleurs, crankset (53/39), and single-pivot brakes. Front brake lever is original but the rear is STI so I could go to 8-speeds. 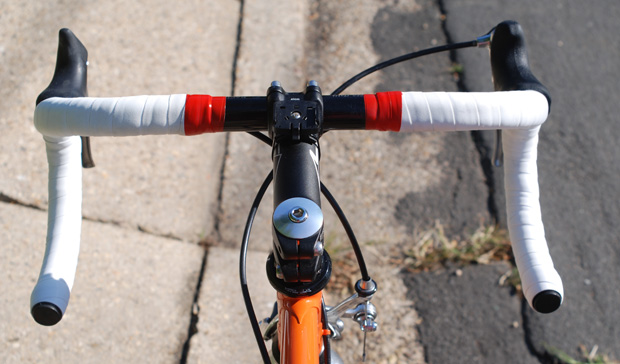 Chuck’s view from the cockpit

The rear Sansin hub actually uses a freewheel instead of a cassette and I was able to find a NOS Sachs 12-23 8-speed freewheel on eBay to replace my 12-21 to give me a lower low gear (although 39×23 is hardly low by today’s compact gearing standards). I built the Mavic CXP30 wheels just when deep dish rims started to come into vogue and they’ve been pretty much bullet proof. The carbon fiber fork and seat post definitely take some of the edge off of the ride, but there’s no mistaking that it’s a “steel is real” bike. The stem is “new school” Shimano PRO but the handlebars are “old school” ITM Super Italia Pro 260s that were de rigueur in the pro peloton in the 90s.

Favorite riding area?
Back when I was doing “serious” riding, I loved heading west to ride in the foothills of the Blue Ridge and on Skylline Drive. One of my favorite rides was the “Blue Ridger” out of Marshall, VA. 55 miles with about 2,600 feet of climbing. That doesn’t seem like a lot of elevation but most of it was steep. Steep little climb up Snickersville Turnpike to Bluemont. The one-mile, straight up climb on 601 (average grade 7% but the actual climb continues for another 2 miles before you reach the top). And then the sting-in-the-tail climb up Naked Mountain. Brutal training ride. But now, almost all my riding is close-in to home. I just ride to ride.

Riding just for riding – and having a great time

Favorite riding experience on your bike?
1991 Tour de France with Breaking Away Tours. Stage 1 in Lyon, which was a 114.5km circuit race in the morning followed by the team time trial in the afternoon. Riding the race route, which was one of the perks of doing a Breaking Away tour. I was with 2 or 3 other guys and we were all wearing Breaking Away jerseys. We were supposed to be well ahead of the race, but there was break that included Greg Lemond, Sean Kelly, Erik Breukink, and eventual stage winner Djamolidine Abdoujaparov. Somehow, as we were entering a small town we got caught inbetween the race caravan and the break. The fans lining the streets were screaming and cheering for us as though we were in the race while we pedaled like mad men, frantic to find a way off the course but we were inside the barricades with nowhere to go but to keep riding. It was an adrenaline rush but scary at the same time because we had no idea how far (or close) behind us the break was. Finally, we found an opening in the barriers and got off the course. Probably 10-15 minutes later the break came through. Whew! I can honestly say I rode the Tour de France with Greg LeMond… 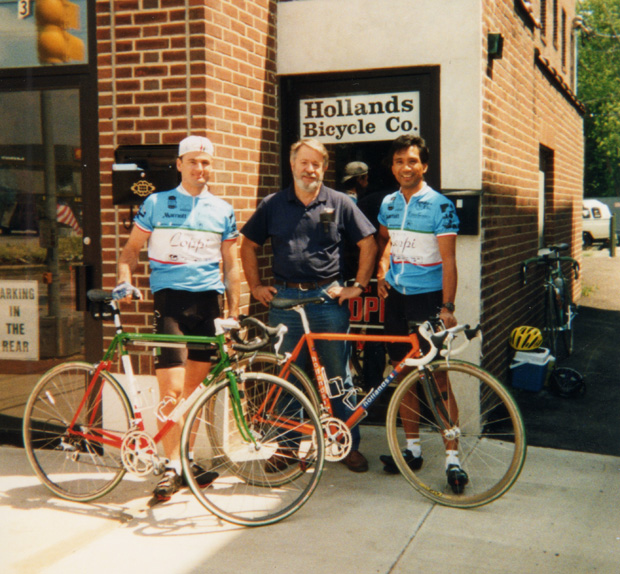 A retro Readers’ Rig deserves a good retro photo so here’s Chuck (r) with his friend Seth and his Hollands and John Hollands himself in front of John’s shop in Reisterstown, MD a number of years ago…

Future upgrades?
My next upgrade is another bike. I’m building up a Felt FC frameset that has nearly identical geometry and measurements (including stack and reach) to my Hollands. It will be interesting to compare modern carbon fiber to old “steel is real.”

Last words?
It’s fun being an “old guy” riding on an “old bike.” I have no illusions or aspirations when I ride other than to just ride, but I still manage to hold my own with a lot of the younger guys who are 20 years my junior when I do occasional group rides. Fausto Coppi was right, “Age and treachery will overcome youth and skill.”

Reader No.2
Name: Sam Bishop
Location: Springfield, VA USA
Age: 56
Bike: John Hollands Stainless Steel (KVA) with S&S couplers
Groupset: Campagnolo Chorus 10 speed Compact 13-26
Wheels: Either Mavic Open Pro/Campy 32 hole or Pancenti/White Industries 20/28
Pedals: Speedplay x2’s usually, Shimano pd-a520 for travel
Saddle: Selle Italia SL
Other: Stem/Bars: Easton EA 90 & 70, Garmin 500, Wound Up fork to get clearance for wider tires
Weight: I’ve had it down to 19.5 (8.8kg) when I tried to get it as light as reasonable for Seattle-to-Portland, but I’d say the normal weight is right at 20 (9.1kg). And that’s with everything except my seatbag. 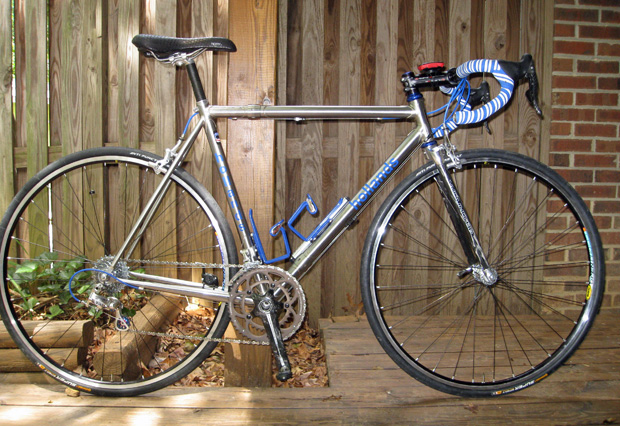 When did you buy it? And what made you choose this bike?
I got it in 2011. I was hit by a car & the travel bike I had at the time was smooshed. I needed a new one. I looked at several – steel, stainless, & Ti, and was about to pull the trigger on a Ti bike. I had a John Hollands frame that he built to replace one he built for myself & a few friends (Chuck, among them) to do RAAM on in ’92 (that one also got smooshed by a car. Nasty theme, here) & loved it, so I figured I’d ask him if he could do it. He was retired at the time, but it sounded interesting and he agreed to do it for me.

I went with bare stainless because I did not want to fuss with a paint job on a bike that was going to be stuffed into a travel case. Now, I get a scratch or something & a bit of Scotchbrite takes care of it. 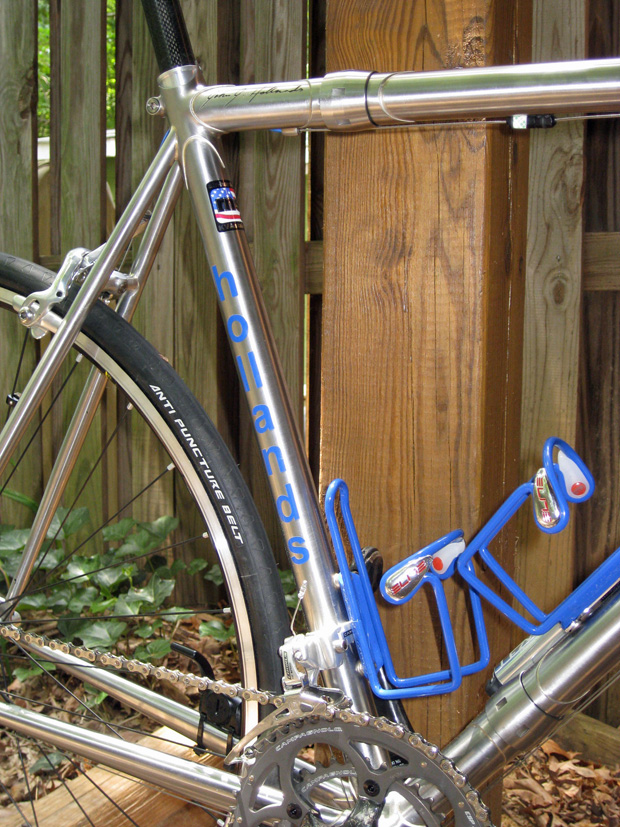 What modifications/additions have you done?
The only changes have been to seat/bar positions. Minor stuff. I got a dummy set of barrel adjusters for packing (somehow one got bent when I took it out to do STP & only because of a GREAT shop in Seattle [The Polka Dot Jersey, if you can stand a shameless plug] was I able to do the ride at all).

The Pacenti wheels were not really bought for this bike, but they work great on it. The ride was smooth before, but now – wow. I will be swapping out the Campy crankset for a square taper one, just to make packing the bike easier. Oh, and before I take it to the Dolomites, I’ll be getting a 13-29.

What components are you running?
Pretty much full Campy. 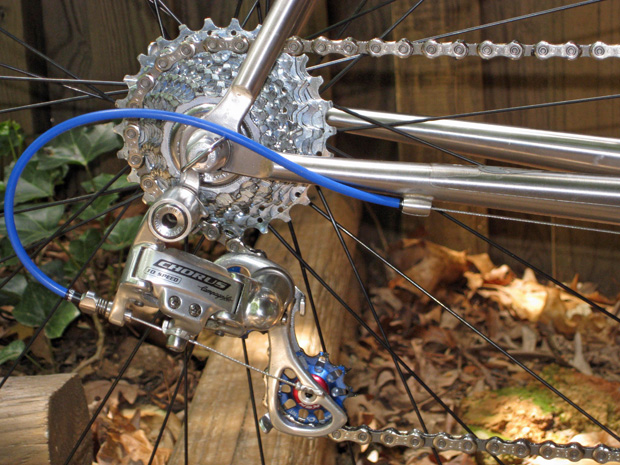 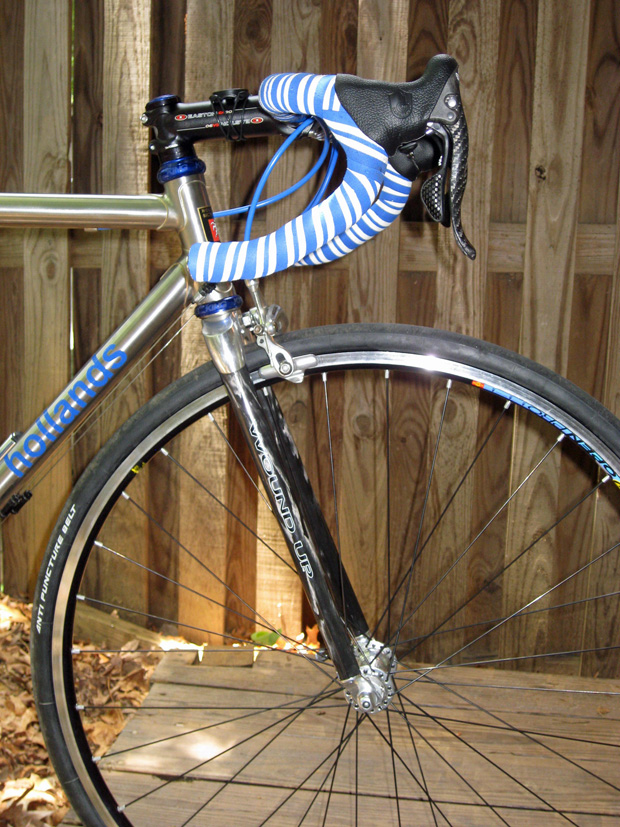 Favorite riding area?
Any place I can get to. New and different is good, but my favorite local-ish area is Skyline Drive in VA (about an hour west of where I live). Great views, nice climbs, wonderful descents and drivers are pretty good about sharing the road. 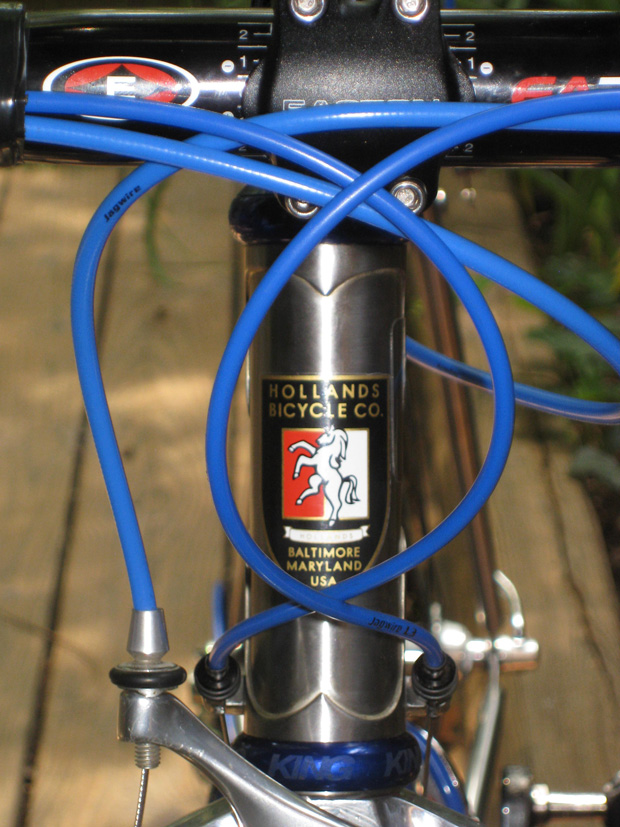 Favorite riding experience on your bike?
On this bike? Tough call. I took it to Montana for a reunion of people who did the TransAmerica Trek with the American Lung Assn. in 1987/8/9 (I did it in ’88). Rode over Going-to-the-Sun Highway. That was nice. Then, I took it to Australia to ride with a friend who lives in Canberra. I really enjoyed that. Hope to get it back down there. 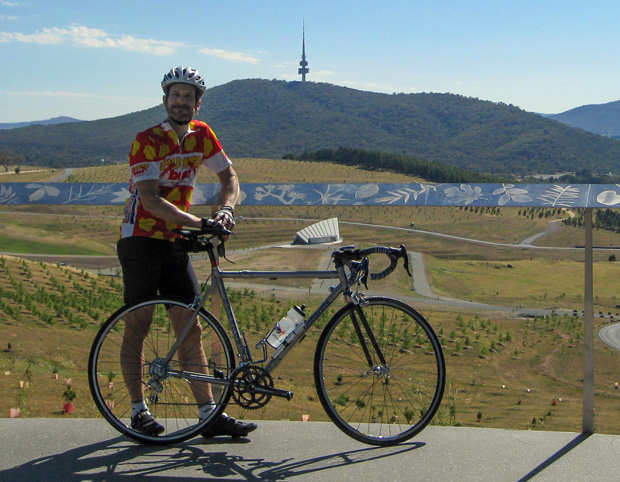 Sam and his Hollands in Canberra, Australia with Black Mountain in the background

Future upgrades?
All I am thinking about at the moment is the crankset for packing & you might consider that a downgrade. Everything else I am very happy with.

Last words?
I love how it packs away & I can take MY bike & ride MY bike all over the world. I also love that it isn’t charged as a bike by the airlines, since the case it is just regular suitcase sized. Between this one and the Dearly Departed one that preceded it, I’ve been to Australia, Austria, The Czech Republic, Montana, Washington State, Oregon, and Tennessee. Next stop is Italy. 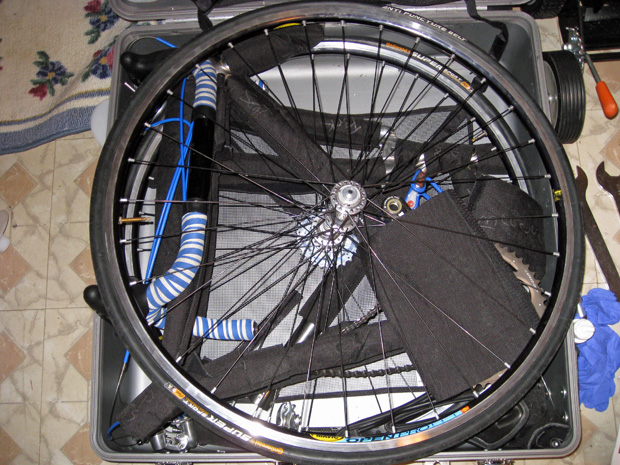 I can’t say enough about how nice this bike rides. I’ve done the bulk of my miles this year on this bike. I was also shocked when I finally decided to weigh it at how little of a weight penalty I was taking to ride a steel bike *with* couplers. All told, it is at most 4lbs heavier than my super light carbon bike. For a bike that goes anywhere, that is not bad.