Readers’ Rig: We all know the Italians have style and class and thanks to Bob Shaver in Denver we can marvel at a piece of cycling art – A 1978 Colnago Super. A stunning bike decked out in period Campagnolo and Cinelli. Perfection. 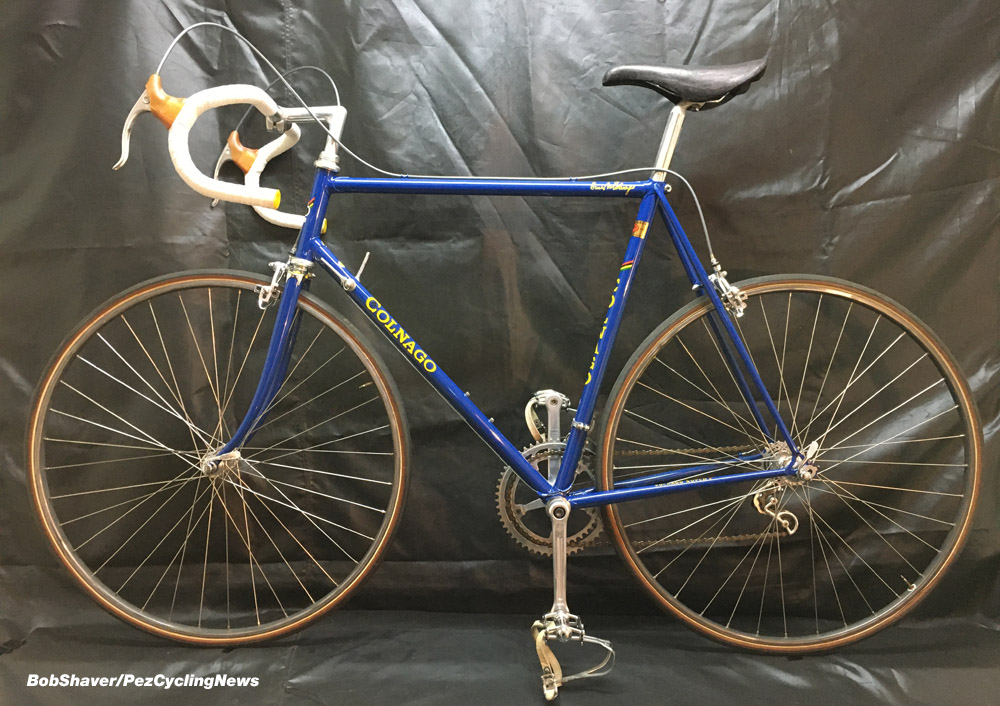 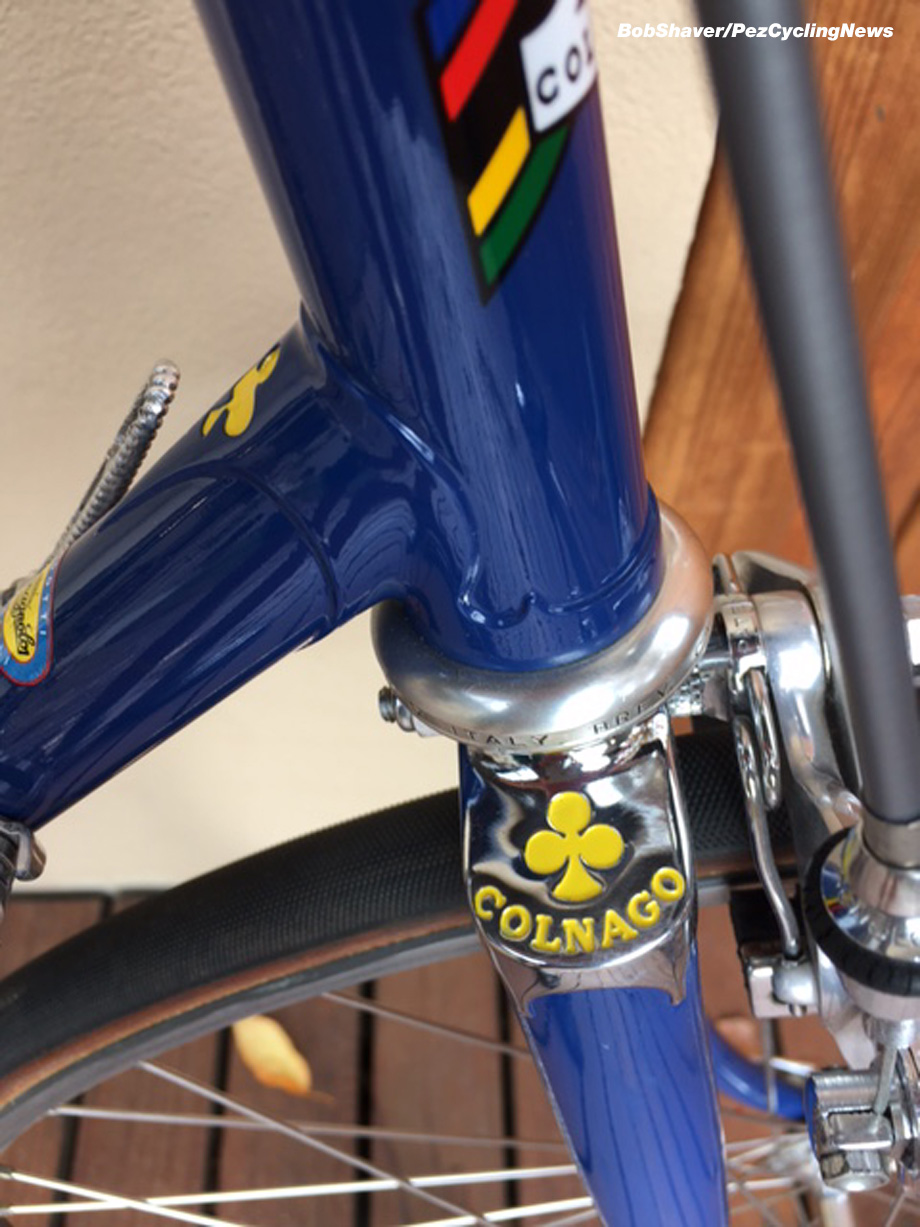 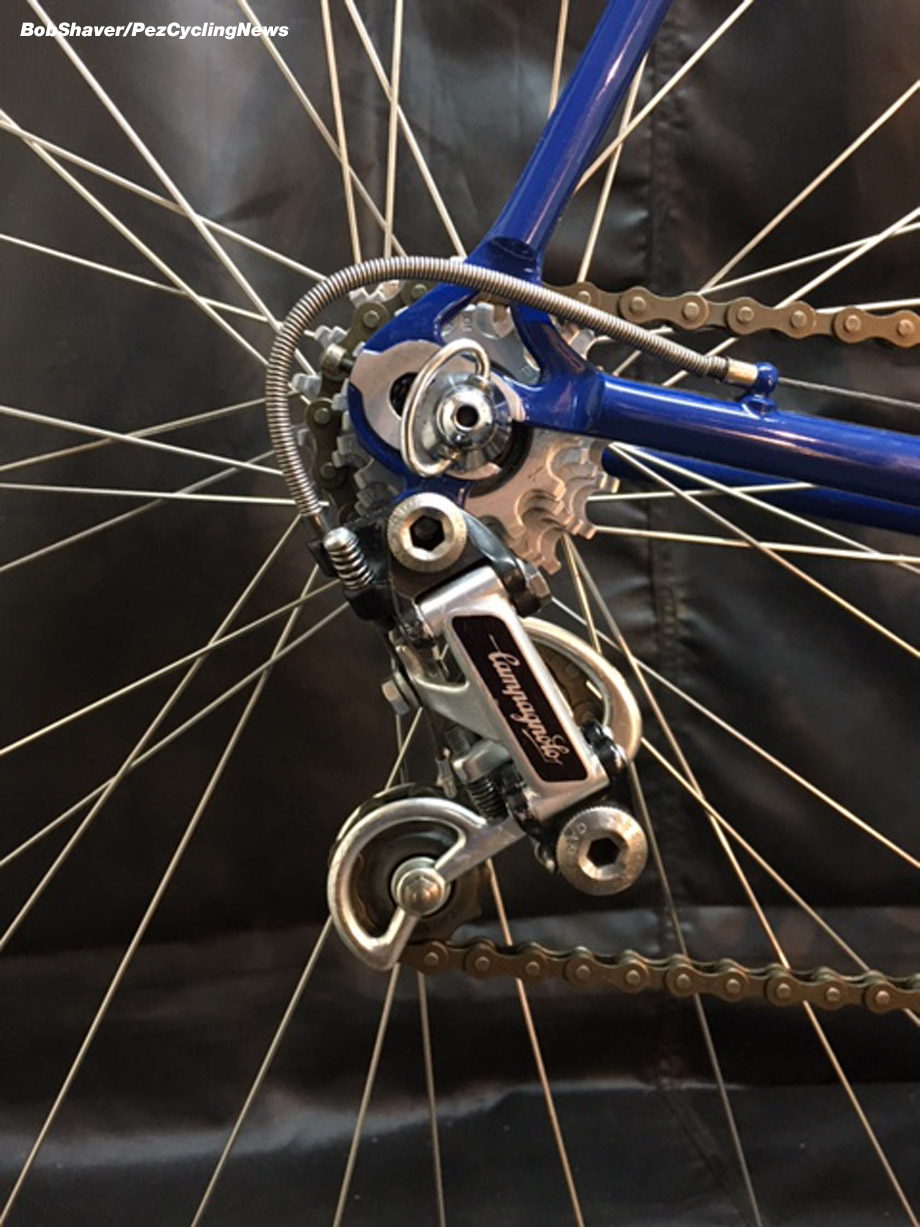 What made you choose this bike?
I have had many special bikes prior to 1979 but always wanted a Colnago. 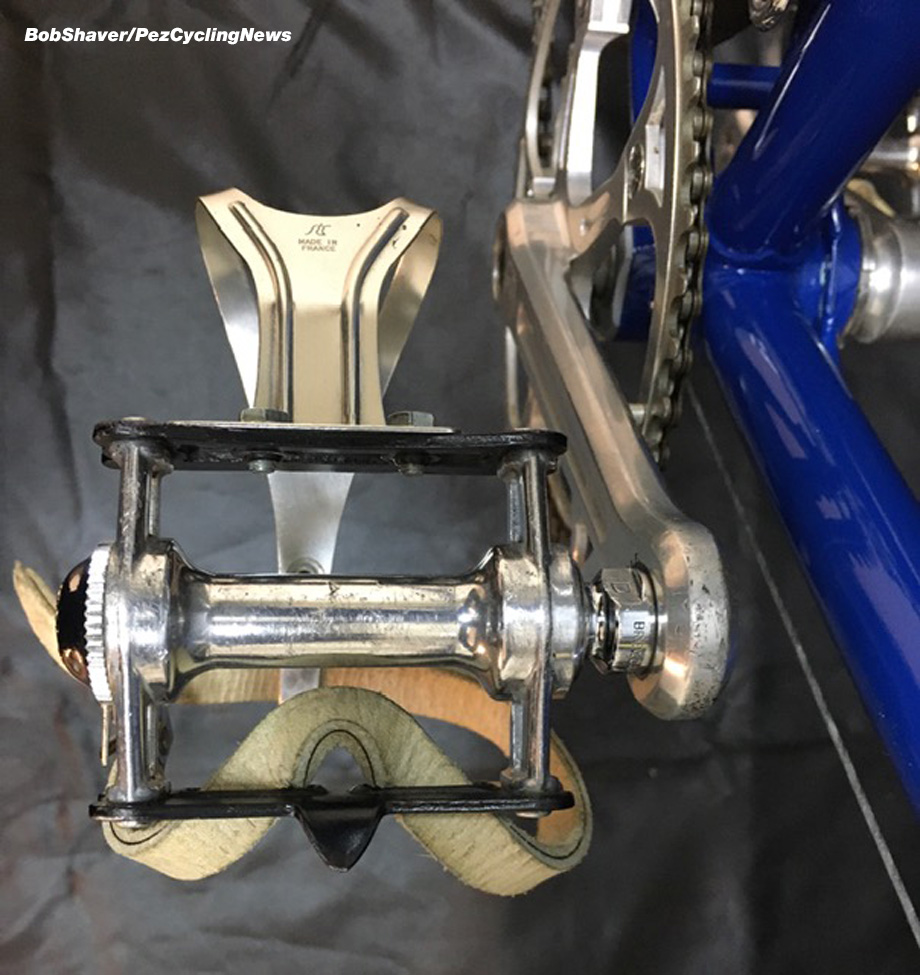 Have you done any modifications/additions to it?
No, just regular drive train upgrades. (Take care of your equipment and it will take care of you). 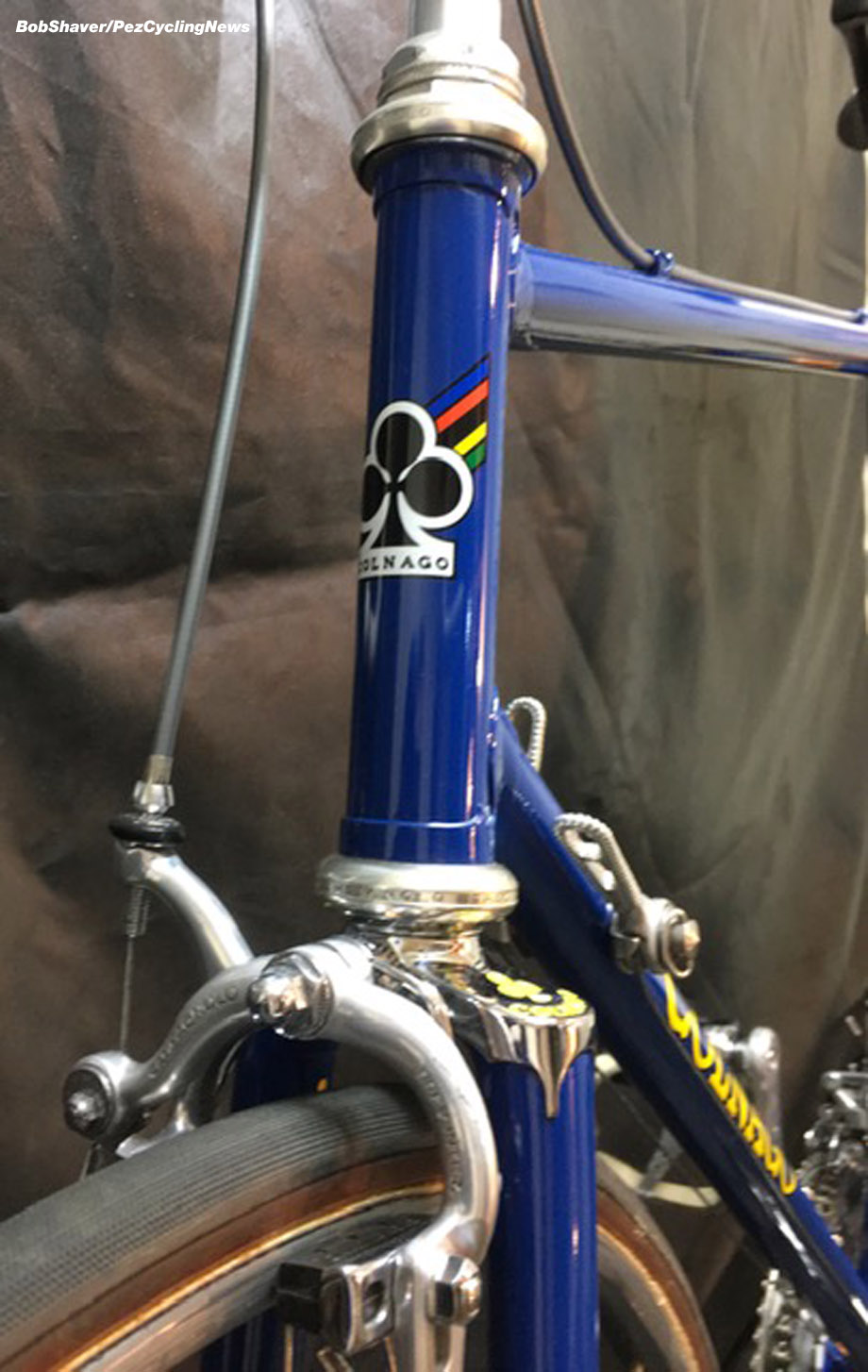 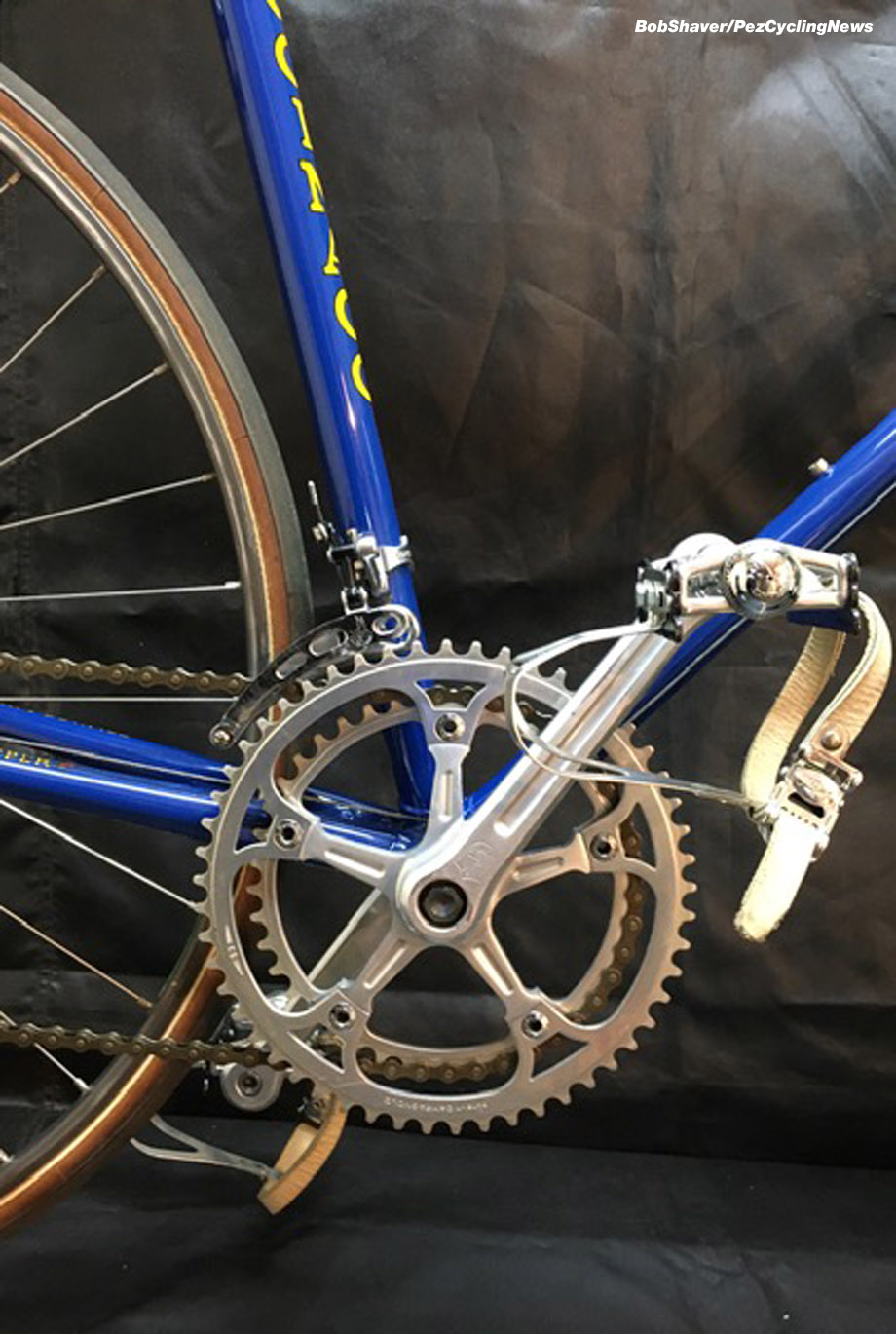 What do you love about this bike?
That after twenty years and 50,000+ miles it still had a great ride. 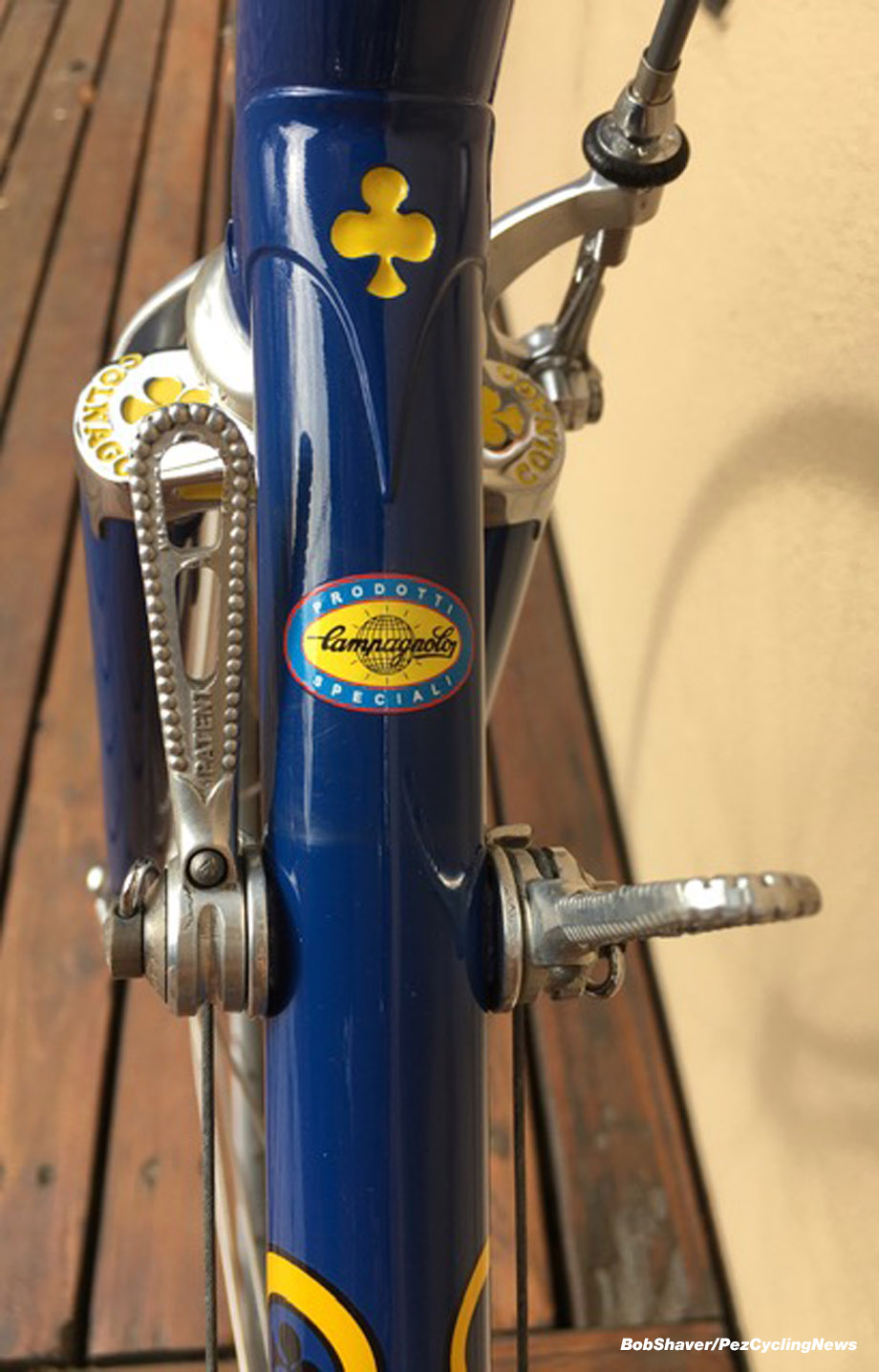 Favorite riding area?
Anywhere in Colorado, especially in the mountains. 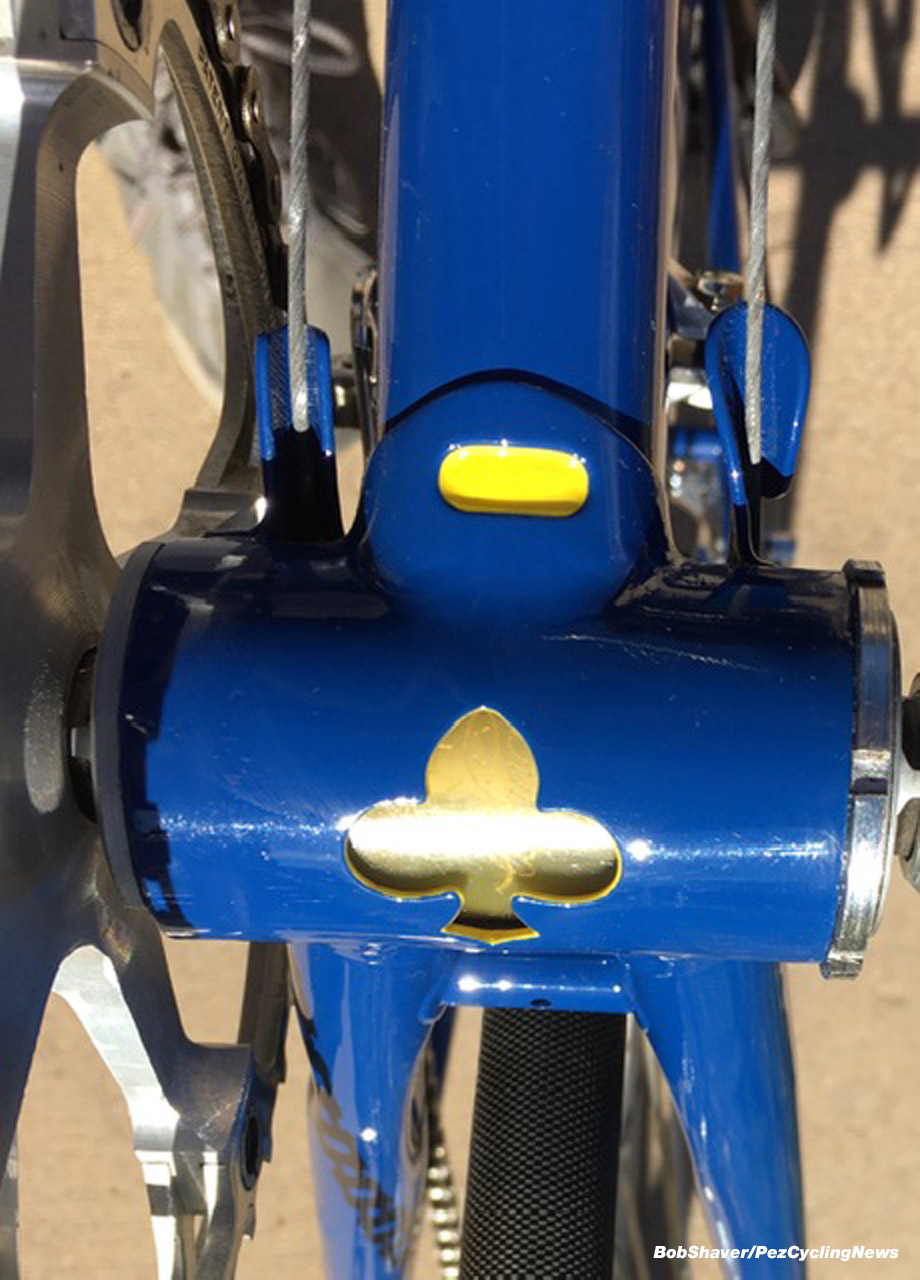 Favorite riding experience on your bike?
Getting 4th Place in the individual time trial at the 1984 USA Master’s National Championship, beating others with disc wheels and being just seconds out of the medals. 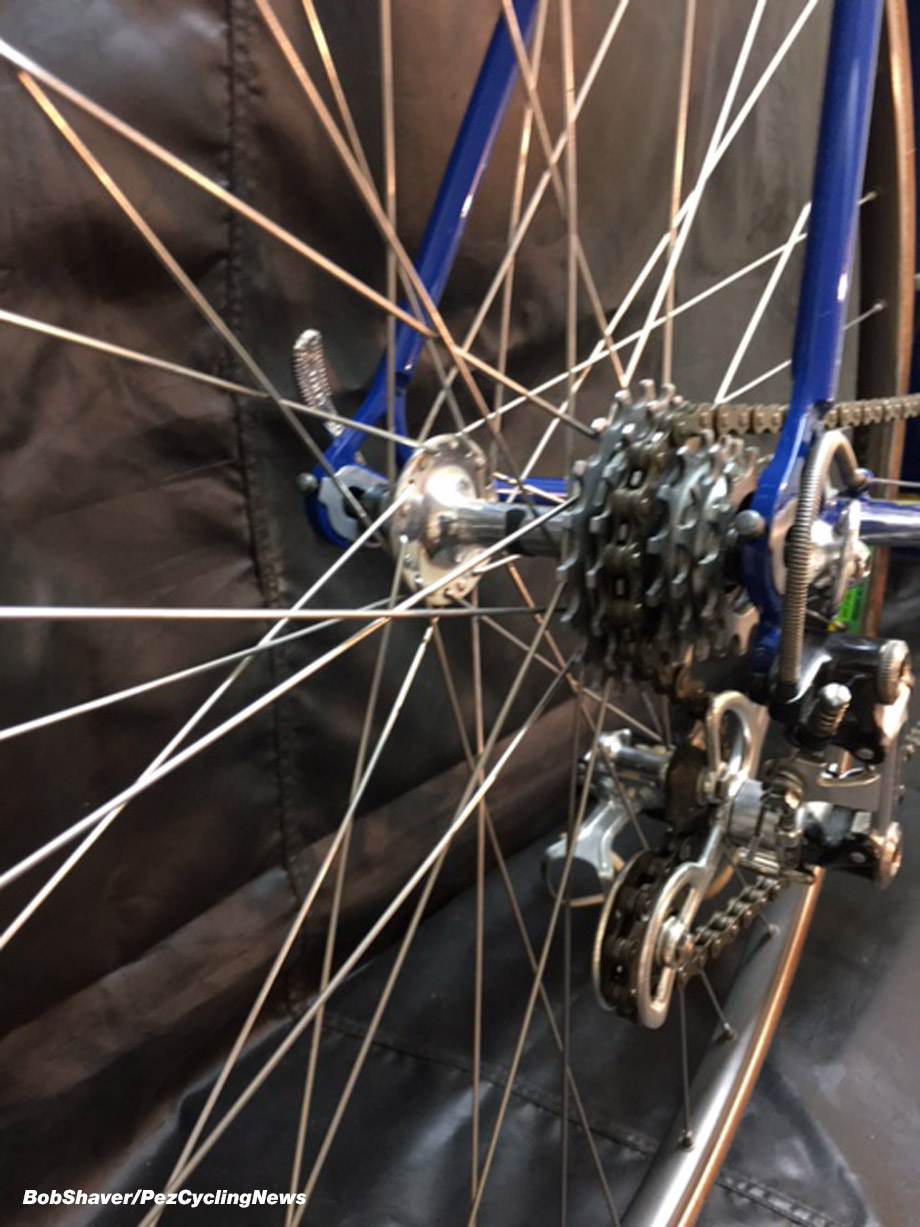 Last words?
I think about all the wonderful people I’ve met, the conversations we had and the great adventures while riding on the Colnago (and my other bikes!). I love the self propulsion aspect of riding, the oftentimes times suffering and the challenge. 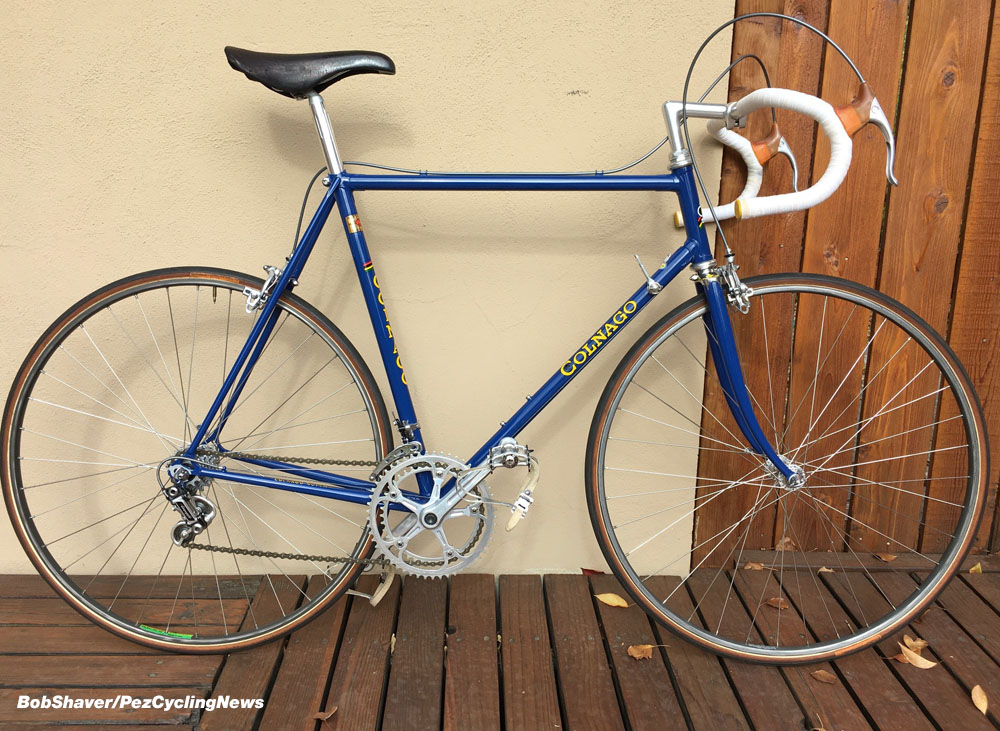 A bit of extra information

Proof of Ownership and Year of Manufacture:
I obtained the frame new in early spring 1979 in exchange for coaching a rider for the US National Track Championships who purchased it while working at “The Spoke” bike shop in Denver that imported frames directly from Colnago. (That store is no longer in business.) Therefore, it couldn’t have been made in 1979. I originally built it up with Campagnolo “Record” components. In 1982 I upgraded the front and rear derailleurs, headset, seat post, pedals and chainrings to “Super Record.” The rear derailleur is stamped “PATENT 81”. The original color was cobalt blue. In 1983 I had leaned the bike against a fence at an event and a participant accidentally knocked it over scratching the decals badly. I had it re-sprayed yellow in January 1984 to match one of my track bikes.

Historical Information:
I raced on this bike in the 1984 USA Master’s National Championships 30-34 age group, where I placed 4th in the individual time trial and 6th in the road race. The latter was held on the Morgul-Bismarck course made famous in the movie American Flyers. Also that year I placed 15th in the Mt. Evans Hill Climb racing with the younger guys in the Pro 1 & 2 category.

In 1992, I had a custom Tommasini built with Campagnolo “Super Record 8-Speed Ergo Power Group.” This new addition reduced my riding on the Colnago considerably. Of the over 200,000 miles I’ve ridden to date, at least 50,000 of those miles were spent on this Colnago.

The picture below shows the last time I remember riding the Colnago at the “Steve Tesich Memorial Bike Race” in 1998. After the Memorial race, I removed all the components and hung the frame and fork in the rafters in my garage; determined to have it re-sprayed cobalt blue. But I was occupied with running ShaverSport and never got around to it until… In 2002, my wife secretly had the Colnago re-sprayed cobalt blue by master frame builder, Rich Gӓngl; surprising me for my 50th birthday. Inspired, I cleaned and polished the components, adding several new, rare Campagnolo parts that were given to me by a close friend for my 50th birthday. The rebuilt bike, never ridden, has been hanging in my home office since 2002. 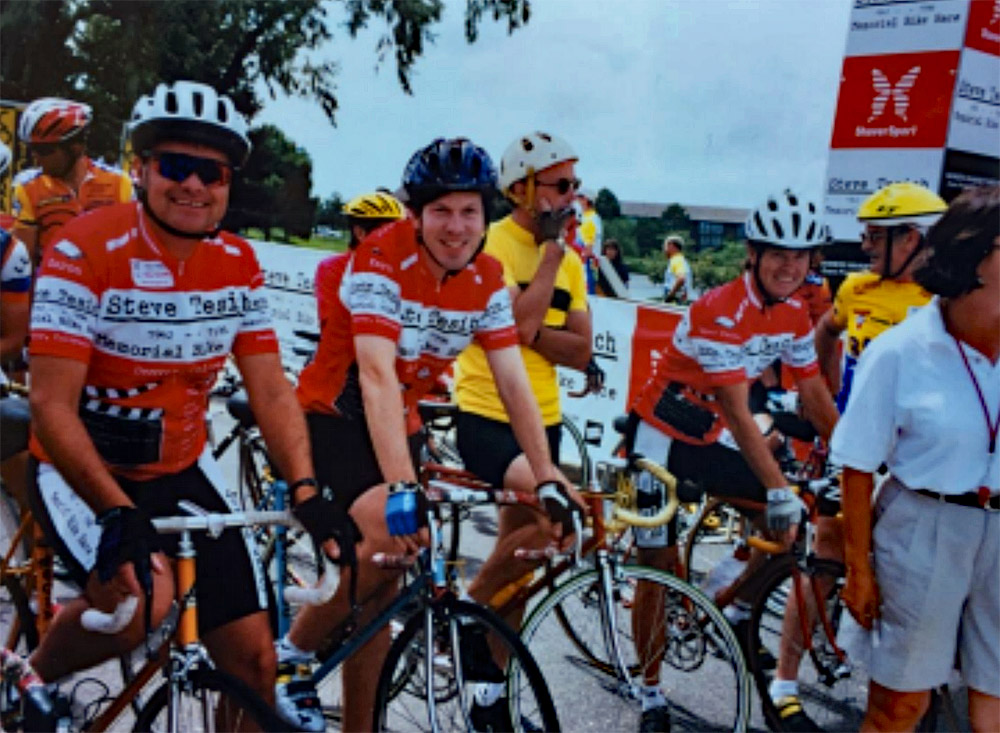 Steve Tesich and Chris (the rider in the Memorial jersey at far right), got me started in bike racing in 1971. The rider next to me in the Memorial jersey is Steve’s nephew on Steve’s 1983 blue Colnago. Incidentally, Chris is on the Masi used in the movie, Breaking Away. Steve gave the bike to Chris after filming was completed in 1978. Steve won a Best Screenplay Oscar for that movie and wrote the screenplay for American Flyers, along with other movies, plays and novels until his untimely death in 1996.

Racing Cyclist
1972 – 1979 Competed throughout the US, in France and Mexico. Winner of 52 races that include: an International race in Mexico, multiple Colorado championships, assorted records, two stage race wins and was the first Coloradoan to race in Europe: (France) on the Peugeot Michelin team in 1976. In 1977 was awarded Best All Round Rider in the Western USA.

Events and Promotion
1974 Bicycle Racing Association of Colorado: President. This organization was responsible for creating race schedules, racing clinics, securing sponsorships and prizes. It also served as a Colorado representative for the US Cycling Governing body.

1975 Easter Seals Handicamp: Rode 200 miles by bicycle in one day, crossing three mountain passes from Denver to Aspen to raise funds for the Handicamp in Empire, Colorado. Over $6,000.00 was raised.

1980 Mt. Evans Hill Climb: Race Director. Secured major sponsorship for the annual 28-mile bike race on one of the highest paved roads in the world; from Idaho Springs, Colorado to the summit of Mt Evans 14,282’. This was the first year that included professionals.

1999 Copper Triangle Cycling Classic: Director. Organized and secured major sponsorship for the first iteration of the iconic 78-mile loop that traverses three Colorado mountain passes. The inaugural event attracted over 750 participants from the US and 3 foreign countries. It has now become one of the premiere single-day cycling events in the US and has raised over $1,000,000 to benefit charities.

2009 – 2010 Governor Appointment: One of five people appointed by Governor Bill Ritter to create the framework for a multi-day professional bicycle race which was to become the USA Pro Cycling Challenge. This race attracted over 5 million live spectators and was televised world-wide. 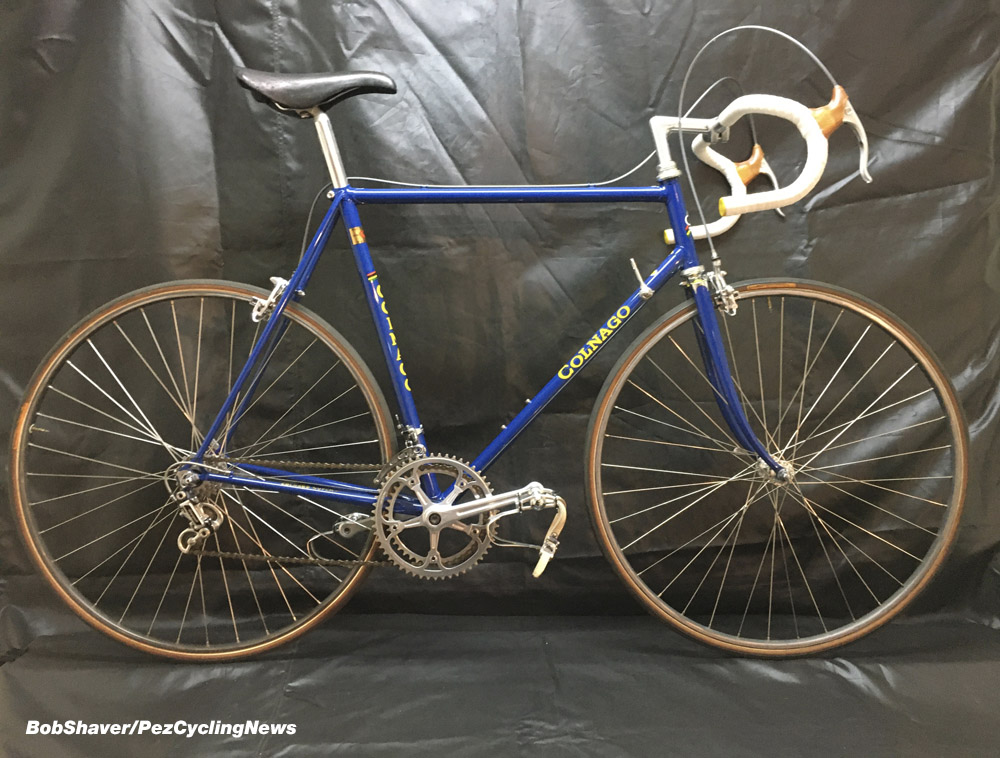 Thanks to Bob for sharing his ride with us. Got a bike that makes you smile? Well how about sharing it with fellow PEZ fans and getting it featured in Readers’ Rigs so we can all smile! Send us a Readers’ Rigs submission direct to [email protected] and your bike could be featured in all its glory here on the pages of PEZ.