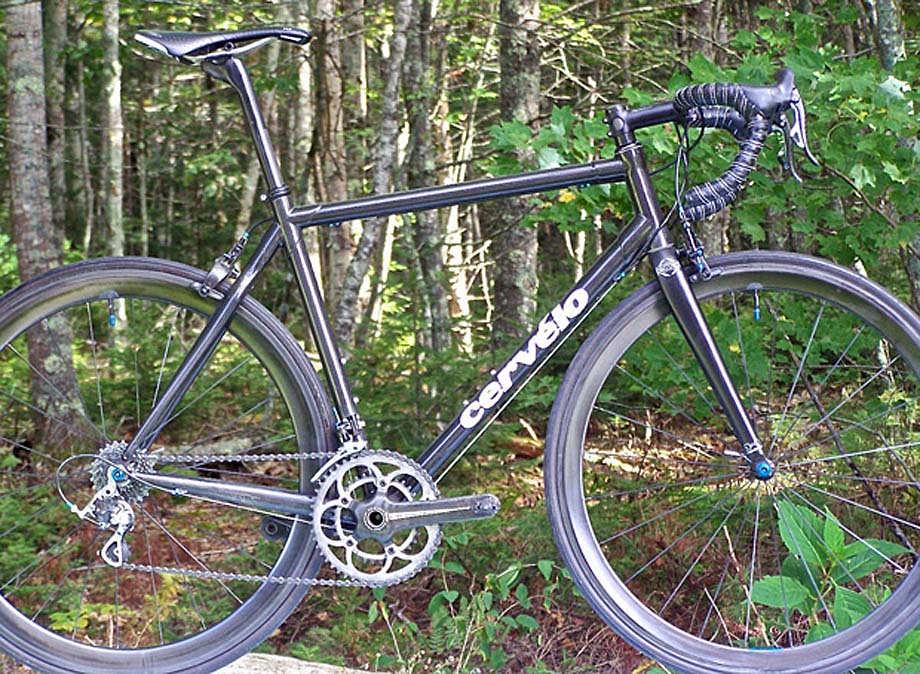 When did you buy it?
It’s a multi-year project that started in 2010, and still evolving. 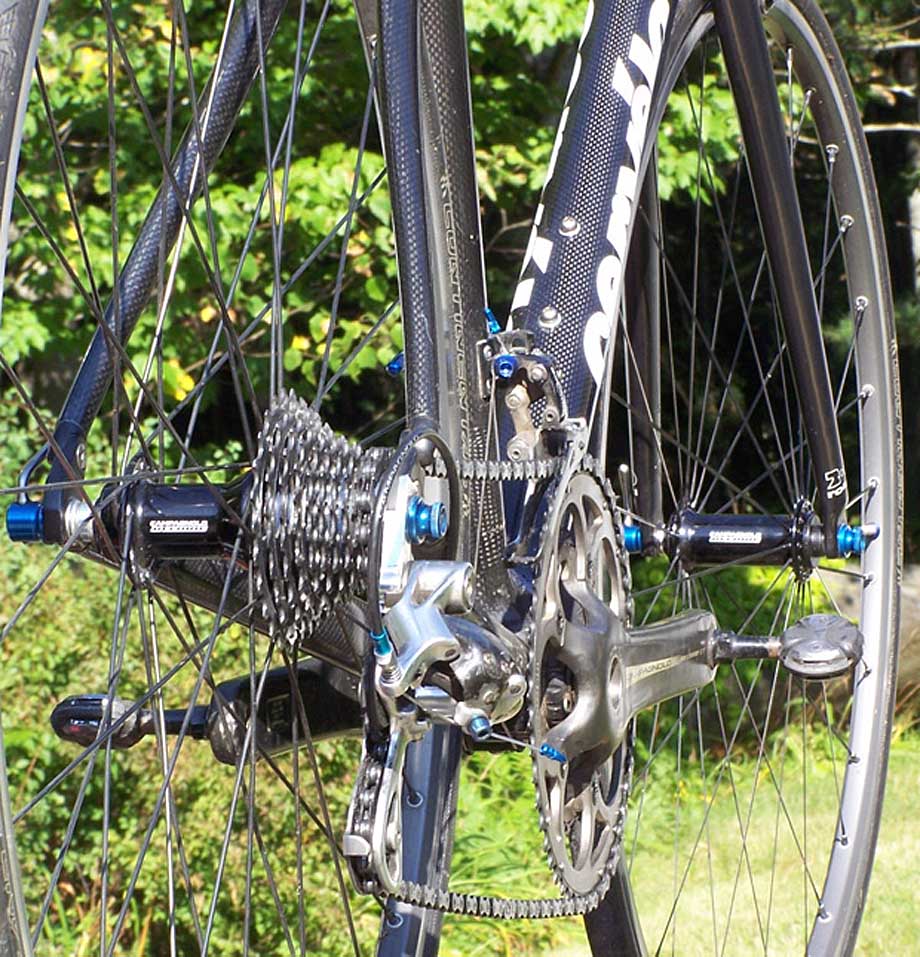 What made you choose this bike?
My goal was to build a breathtakingly beautiful carbon rig strong enough to train my 180-pound butt that could quickly and easily become an under-15LB race whip, and even transform into a respectful TT ride. I thought the sub 15LB race weight goal was attainable with a pair of ENVE carbon tubular rims and their 2.0 fork.

I had the Campagnolo Record 10 groupset on a Dean Ti gravel rig, including the Ultra-Torque crank, which I wanted to use as it is the stiffest and most beautiful I¹ve ever seen. Every bottom bracket I’ve had developed creaks, the Ultra Torque design, with it’s wavy washer, was no different. However RogueMechanic.com advised removing the wavy washer and increasing the distance between the cups with spacers. To do this correctly I needed a bottom bracket shell that had wide flat surfaces for the spacers to securely seat.

I considered the LeMond Triomphe series or a BMC SLR01 but they were out of my budget. I found this 2005 Cervelo R2.5 for a very low price (made even more so when I parted out the fork that came with it) because it needed a repair. Calfee Designs fixed it for only $175 (and under 100 grams of extra weight). While they had it, I had them strip the frame of all graphics before clear-coating.

When it returned, I rushed to install the crank with the spacers. I’ve never felt anything spin smoother. Even now, after more than 15,000 miles of pounding it through races and nasty New England conditions, it still feels like butter and remains creak free. Cervelo’s R2.5 design is monocoque at the bottom bracket area with lugged carbon at the head-tube and seat-tube cluster. This gives it the crispness desired at the drivetrain with compliance where needed. 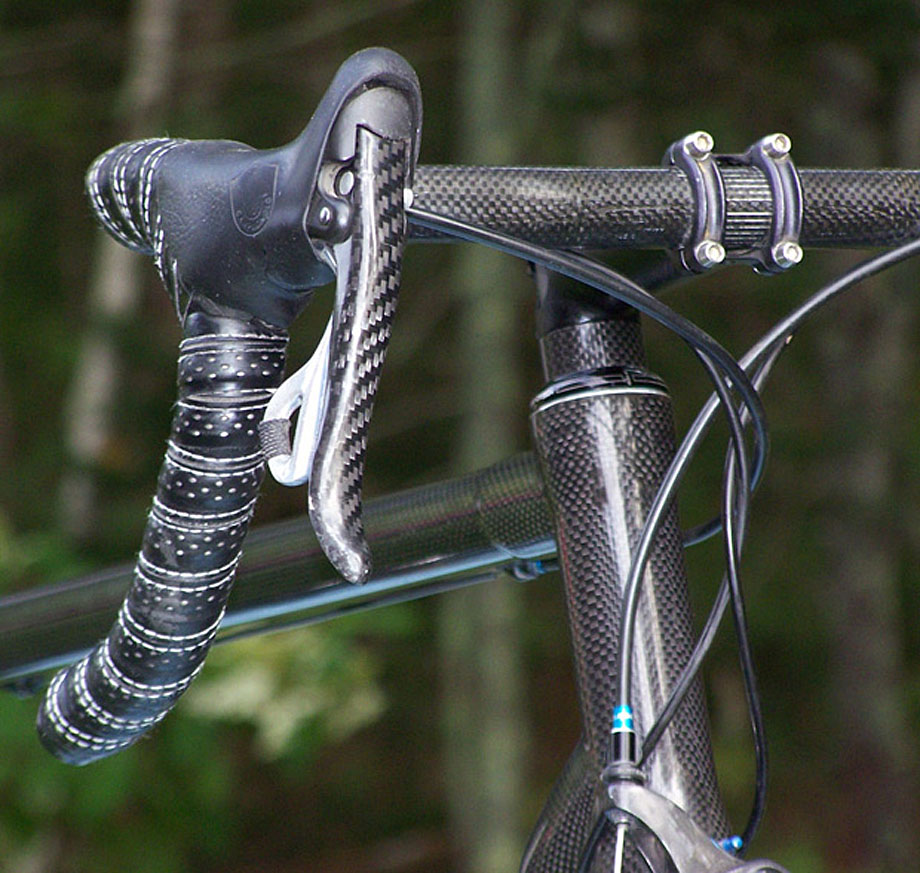 What modifications/additions have you done?
It’s kind of a – What haven’t I done? I got tired of red or yellow (or worse: red AND yellow) graphics on so many bikes, so left the frame nude when I installed the ENVE UD carbon fork. Each time I installed a component with graphics it took away from the frame’s beautiful carbon weave, so I stripped most of the components.

The carbon paddles of the Record Shifters flexed too much so I swapped the paddles for a pair from Chorus shifters and I installed fresh G-springs. Then I wrapped the ends of the paddles with a bit of nylon chord for a better feel, and added carefully trimmed vinyl no-skid tape to the tops of both thumb triggers.

I stripped the Specialized seat post, Easton bar, and even removed the little red rubber bumper from the Syntace stem. When I wrapped the bars I included gel pads under the brake hoods and left much of the bar’s top exposed. I finished the wrap with the same nylon chord as on the shifter paddles, carefully allowing the cables to exit 1/2 way thru the nylon chord wrap.

The Record derailleurs were beautiful but I was wary of the carbon cages, so went with Chorus front and rear. I needed highlights to make the bike really pop. I considered the myriad of options but fell for the blue anodizing that is available on many parts and fasteners—when paired next to the carbon they appeared almost iridescent. I stripped the graphics of the Bontrager XXX brakes and painted the red quick-release bolts blue. I was careful to squish both the brake and shift cables with steel pinch bolts before replacing with the beautiful anodized blue ones. I used epoxy to set a length of cable liner to the rear brake cable along the frame to help protect it from cable scratch. 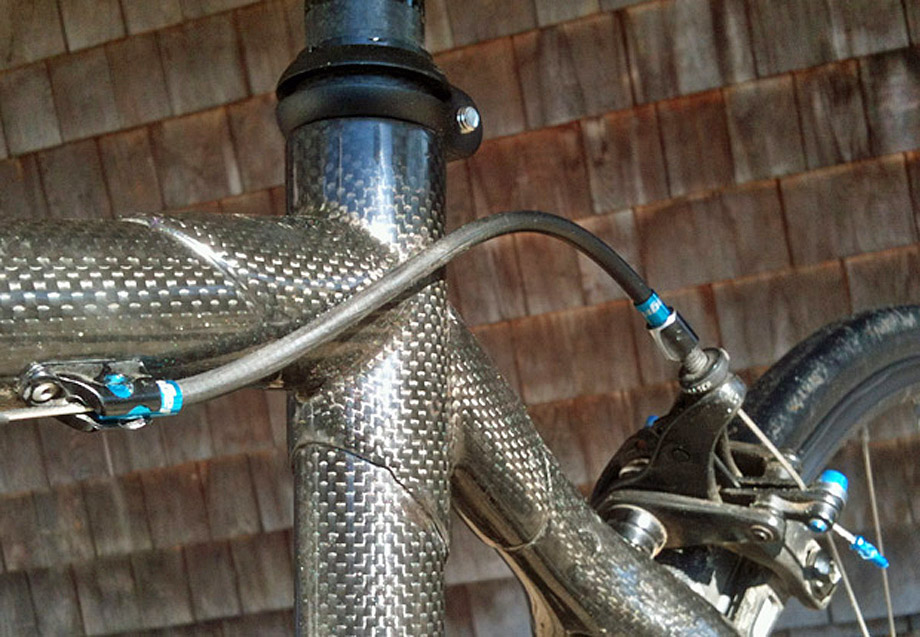 I laced the ENVE wheels after removing the graphics from both the rims and the DT hubs. Since my rides don’t include any serious descents TUFO tires/tape/sealant made the most sense, though I blacked-out the TUFO graphics with a sharpie. I trimmed some vinyl no-skid tape into a pair of round circles and then placed a small hole in the middle. I put these over the ENVE stem extenders to reduce rattling. Small felt pads inside the water bottle cages do the same there.

The Mavic rims were NOS “Reflex Clincher”, which I think then became their Open-Pro line. I removed the graphics and replaced with just “MAVIC” in blue. The rims are anodized gray throughout. Some day, if they are damaged or wear-out, I’ll replace them with the new Open Pros that have the ceramic brake surface. The brake cables are set so the barrel adjuster’s high/low range accommodates the different rim widths of both wheel sets. I adjusted the Campagnolo Record rear hub so the cassette landed in the exact same place as the DT240 hub of the race wheel, thus eliminating the need for any rear derailleur adjustment when swapping wheels. The ENVE carbon specific brake pads work surprisingly well on the aluminum clinchers so swapping pads between wheel sets is unnecessary (though I frequently check the pads for bits of aluminum).’

I bought both white and blue Cervelo frame decals and pondered which to use for weeks before choosing the bold white version on the down-tube only. I’ve always thought manufacturers place their name too many times on a frame. Since the decals are on top of the clear coat I can change them any time. I tried blue ti bolts on the stem and seat post binder, and also blue chainring bolts, but it just seemed too much so removed them. Honestly, I think it’s just as beautiful with either wheel set, though it certainly looks faster with the ENVE tubulars.

How many miles/kilometers do you do a year?
I try to do 5,000 miles per year but it rarely adds up to that. Winter where I live requires a mountain bike with studded tires to ride groomed snowmobile trails. The net result is that I put a lot of time in the saddle during the three-plus months of snow cover, but accumulate relatively few miles. 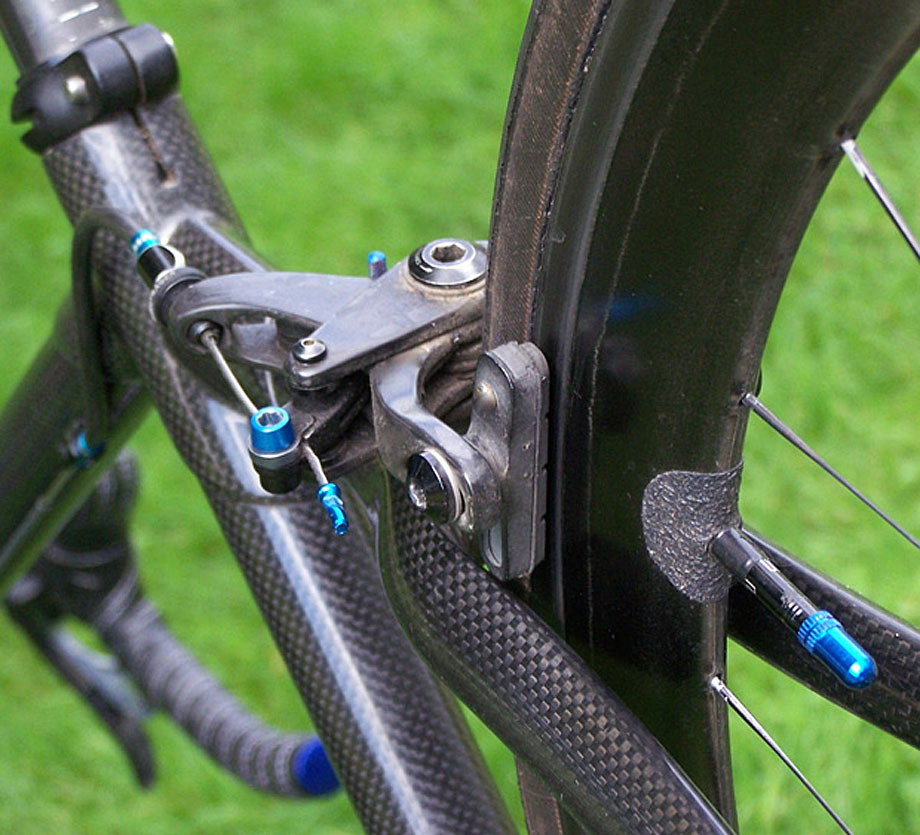 Favorite riding area?
I live in the great state of Maine which has no fewer than 3,478 miles of ocean coastline. My favorite route travels the perimeter of three separate peninsulas, totaling 50 miles, with prevailing views of crashing surf and working lobster boats.

Favorite riding experience on your bike?
I won the local club crit in the final sprint with hairy legs and the number 666 pinned on my 1990 U-Maine cycling jersey, which was older than most of the competition. Also, I’m often able to sneak up behind foxes and coyotes who trot down remote roads early in the morning—further evidence this bike is perfectly tuned. 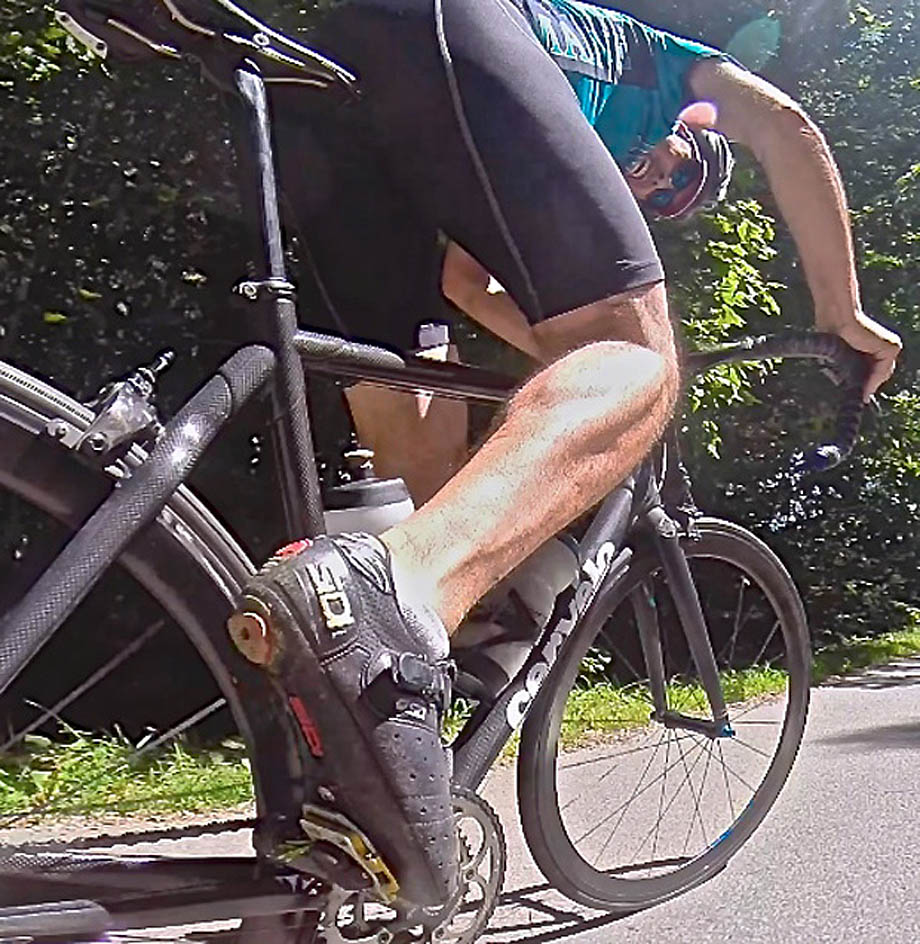 Future upgrades?
Carbon clinchers someday, but I doubt I’ll go to either 11-speed, electronic, disc or hydraulic anytime soon. I’ve avoided tapered forks, 31.8 stem/bars, and all of my rigs are Campy 10 speed set-ups with 27.2 seat posts. Folks might think I’m a retro-grouch, but it’s really just because I love cross-breeding my fleet and the trickle-down availability of parts including rings/chains/cogs/wheels.

Last words?
Occasional advice is acquired from the local bike shop: Bath Bike (a.k.a. Bikeman.com). I walk in with a six pack or case of beer (depending on how over-my-head the problem is). I¹m careful to buy tools, parts etc from them, too.

Use lock washers on water cage bolts. A full water bottle weighs a lot and without a lock washer the bolt, over time, will be over torqued and eventually strip the frame’s threads.

I lace my own wheels and encourage any do-it-yourselfers to try. There is nothing more mechanically rewarding as riding your own built wheels. Mistakes are not catastrophic—a broken spoke or a wheel going out of true after a few hundred miles. However, I’d warn about aluminum nipples (I’ve had bad luck with them, probably due to the relatively salty air around here). I keep spoke count equal between the front and the rear (race is 28/28, train is 32/32) so I can re-use/swap a rim if one fails.

I’ve always disliked saddle bags—they ruin the lines of the rig, jingle with loose items, and feel wobbly when climbing/sprinting. Instead I neatly pack a complete repair kit (including a mini-pump) inside a large water bottle. I have one for the clincher wheel set and another for the race tubulars. Here in the Northeast there is plenty of fresh water stops so 2 water bottles isn’t necessary.

I chased grams for a while, getting the race version down to 13.7 pounds, but the cassette was very expensive, plus the bike lost some of it’s comfort. The old adage “choose 2: cheap or light or strong” is true. I’ve snapped saddle rails, seat posts, stems, handlebars, and countless bolts. Since then I’ve slowly increased the weight with stronger components to what it is today.

I’m quite proud of creating this 14.94-lb beauty, with its threaded bottom bracket, brass nipples, aluminum derailleur cages, and a comfortable saddle. It’s weight is low where it counts but the bike is solid where it’s needed. I also convert it to a TT machine with an entire bullhorn/clip-on set-up complete with Campy 10s bar-end shifters and an aero fork with 40mm rake. It looks sick. 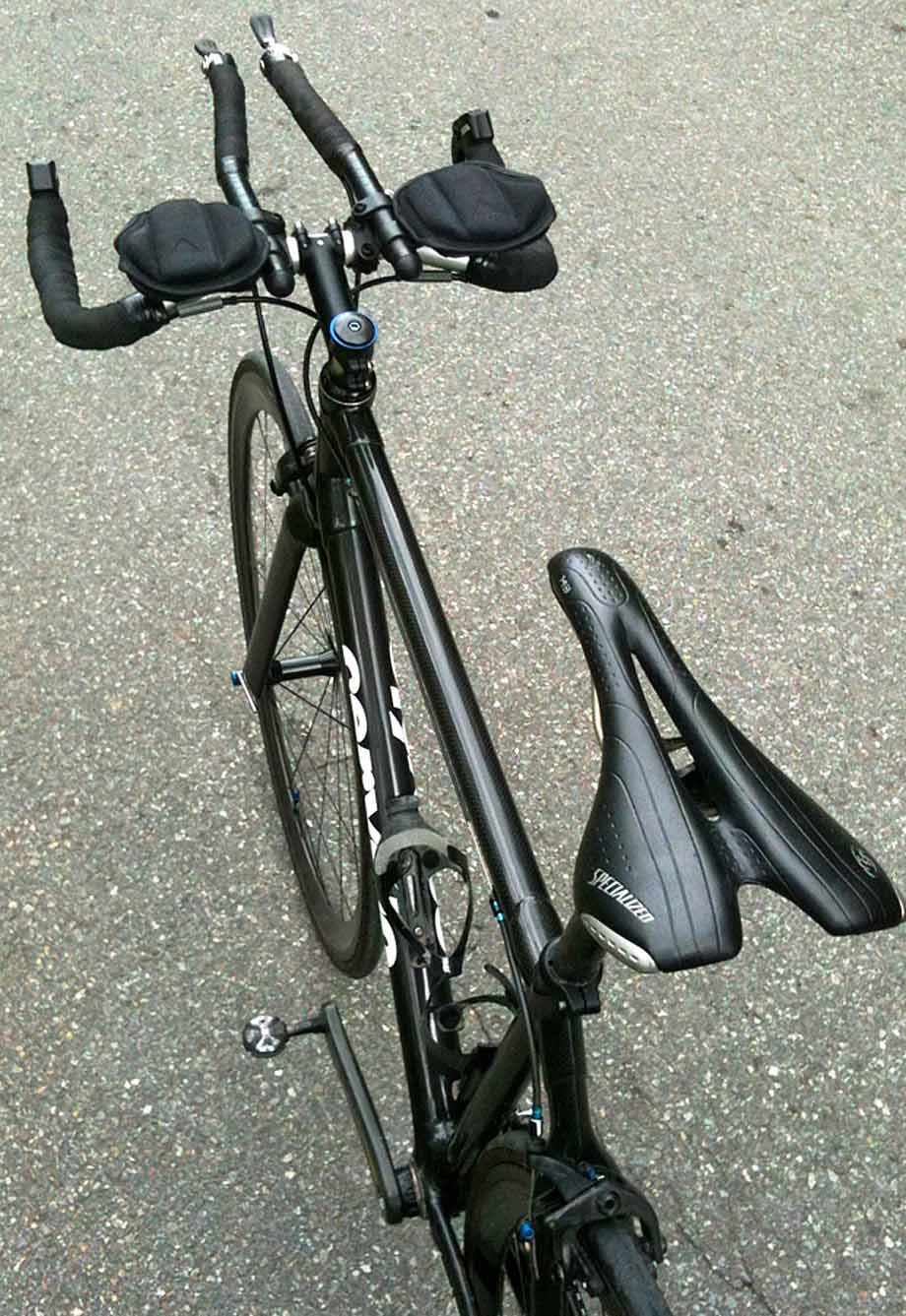 Got a bike that deserves some glory? Contact us via the Comment box below, or send us a Reader’s Rigs submission to [email protected]

San Remo PEZ: To The Poggio!