It’s time for a bit of bike voyeurism now as we take a look at two Pez Fans’ machines! Today’s installment of Readers’ Rigs brings us a highly original Fondriest TF2 with an amazing 4 speed block and a not so standard Specialized from an old Pez friend. It’s Readers’ Rigs time! 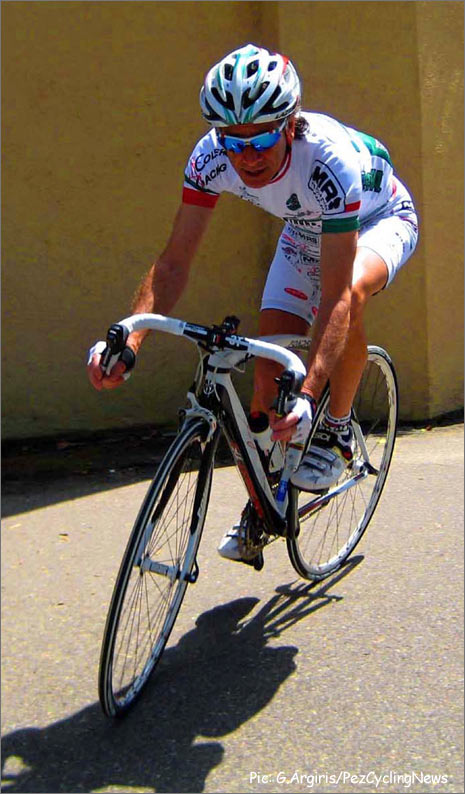 Reader number 1, George and his Fondriest.

What made you choose this bike? I bought this frame purely on looks. Since I started racing in the 80’s I always wanted something different, something the other guys didn’t have. I trusted the Italian builders and felt they always were looking to take the frame to the next step. 16 diffrent Italian frames later, I’ve never been disappointed.

What modifications/additions have you done? Since I’ve always built a bike up starting with the frame, my modifications come from mixing and matching of what I feel are the best match for whats going to be for the bike’s performance and for it’s overall looks. 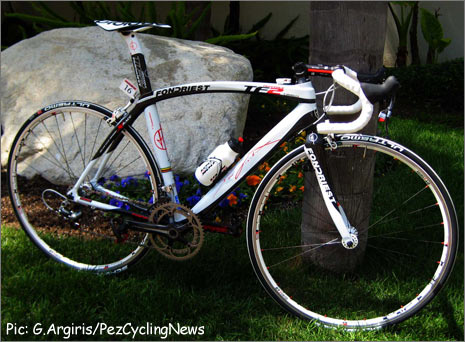 George’s Fondriest with race number and all – ready to race!

What components are you running? I tend to go against the grain. For instance, I’m running a Campy ergo lever for the front derailleur, and a Sram shifter for the rear. The TRP 970’s are some of the lightest calipers out there, but more importantly the shape and color blends well with the Fondriest tube shape. The DT Swiss are in my mind wheels I don’t have to think about. They plain and simply………Perform. My custom 12/17 (4) speed straight block serves 2 purposes, 1) It’s all I need. 2) they intimidate the young. Oh, and yes I’m a pure climber, and done up to 22% grades in these cogs. I grew up in San Francisco and have run gears like this since 1984 without having screaming knee syndrome! 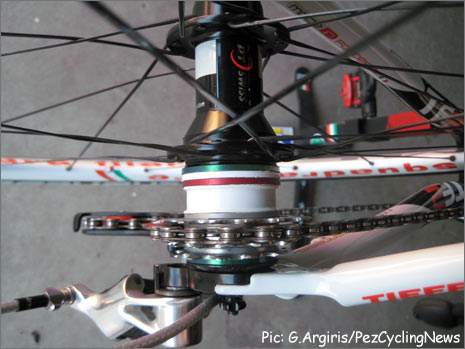 Yep, that’s a 4 speed block alright. George is certainly one of a kind!

How many miles/kilometers do you do a year? About 7000 miles a year averaging 4 times a week for the last 32 years.

Favorite riding area? Down here in San Diego my favorite training loop is Highland Valley Rd. It’s a 30 mile hilly ride with about 2,400 in gain. with several steep sections ranging from 8% to 18%. Has everything I need as a climber, excellent flat section before the hill, great rollers, and superb technical decents. I have all this right in my back yard.

Future upgrades? The artist in me finds me constantly changing the small things, but never a real major change. If that is going to happen I might as well buy another frame. 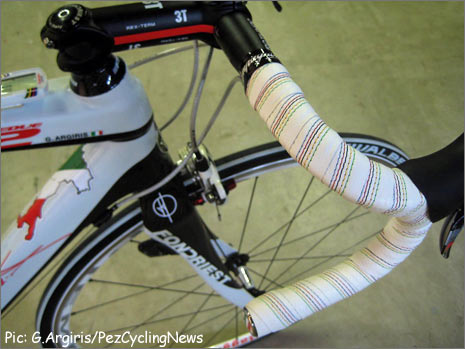 It’s all in the details for George’s Fondriest with this sweet looking bar-tape wrapping up the package quite nicely.

Last words? I love the bike, the machine, the history. I rode at first for the fun, then I rode for competition, then to keep my heart strong to surpass my dad’s early passing of a heart attack at 51, Now? All of the above, and most of all to walk my now 5 year old little girl down the isle someday.

Favorite quote for the cocky young racer? ‘I’ve been on a bike longer than you are old’

Our next reader to send in his photos and story was Chad from Utah who contacted me through our Facebook page. I first met Chad many years ago when he was just starting to get into riding but hadn’t seen or heard from him in years so it was good to get his message and to check out his latest machine;

When did you buy it? I bought the frame in 2006 after I discovered that the source of a creak coming from my 2003 Litespeed Tuscany was a crack in the head tube. Don’t believe what people tell you about titanium frames becoming family heirlooms! 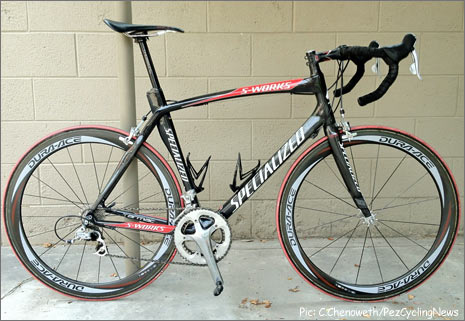 What made you choose this bike? I was in the market for a carbon fiber bike, and had a good relationship with a bike shop that sold a lot of Specialized products. Basically, it was the nicest frame I could get my hands on and I got a good deal. I knew that the geometry worked for me as my first bike had been a Specialized Allez.

What modifications/additions have you done? Initially I transferred over some very well-worn Shimano Ultegra 9-speed components from the old bike. Soon, I replaced most of that stuff with first generation SRAM Rival, which is still going strong. Around the same time, the German cycling magazine Tour conducted a crankset test with very favorable results for Shimano cranks, so I bought a set of used Shimano Dura-Ace cranks off Ebay, circa 2004-2005 vintage.

What components are you running?
My levers, derailleurs, and brakes are all first generation 2006 SRAM Rival. Cranks are the aforementioned Shimano Dura-Ace. My decision to run this unusual setup was not arbitrary. When the SRAM double-tap stuff came out, all levels of the groups functioned essentially identically and there was a very small weight penalty for the much cheaper Rival vs Red if you excluded the cranks from the equation. I took care of that by using the Dura-Ace cranks (which tested better than any SRAM offering according to Tour magazine anyway.) The 2006 Dura Ace C50 wheels in the photos come out for special occasions, but could probably be used for everyday riding if it wasn’t for the fact that a tubular puncture is difficult to deal with on the side of the road. They weigh in at a very reasonable 1500 grams – light, but not delicate light for a relatively big guy like me. I think that Shimano wheels are underrated and there is some very sensible engineering at work there.

How many miles/kilometers do you do per year? The battery died in my computer 3 or 4 years ago and since then I’ve just chosen to live without it. I LOVE dropping guys with $3000 power meters installed on their bikes. Turns out that it is kind of liberating to remove quantification from the equation and just ride. I don’t have any idea how many miles I’m doing, but I ride most days a week when my schedule allows it.

Favorite riding area? The cycling bug bit me over ten years ago when I was living on the Gold Coast in Australia. Absolutely beautiful riding there, great racing, and some great riders as well. I literally dreamed about that landscape for years. Having just moved to Salt Lake City from Chicago, I am living some of those dreams again with some spectacular scenery and great climbing on offer. 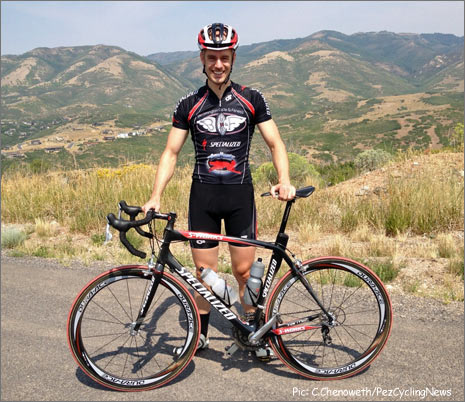 Chad and his machine living the good life in Utah.

Favorite riding experience on your bike? My favorite moment would be from a number of years ago when I had the chance to re-unite with Pez’s very own Chris Selden at his new home in Strasbourg, France and relive some of the golden days from when we used to ride together in Australia. We rode one epic day from his place in Strasbourg to Liestal, Switzerland through challenging terrain and the driving rain. Jens Voigt would have been proud! (Ed’s note: I remember this day as basically being a 2 man time trial for 160 odd kms with backpacks on and in driving rain. This is your favorite moment Chad? You’re a sick, sick man. – Seldo)

Future upgrades?
Now that I’ve moved to the mountains from the flatlands, I would like to replace my brakes. Mine are starting to look a little sketchy and I’d rather not end up at the bottom of some cliff!

Last words? This bike inhabits the zone where it is not yet old enough to be considered a classic but is now far from cutting edge. That’s just fine by me. Wanna race?

So another edition of Readers’ Rigs over with two very different machines but I’m sure both of them have provided many hours of fun for their respective owners. That’s the thing with Readers’ Rigs, you could have a $500 cheapo or a $15,000 superbike as long as you love it and have fun with it, that’s all that matters. For those of you that just can’t get enough of a bit of bike voyeurism like me, then keep it tuned to Pez for more Readers’ Rigs in the future and you can always check out Readers’ Rigs Number 1 and Readers’ Rigs Number 2 if you missed them!