The Northern Hemisphere winter is ever so slowly starting to lift, so what better time to have a closer look at two PEZ fans’ machines that have been hibernating inside from the cold; a Specialized from New York and a Bianchi from Wisconsin. It’s Readers’ Rigs time! 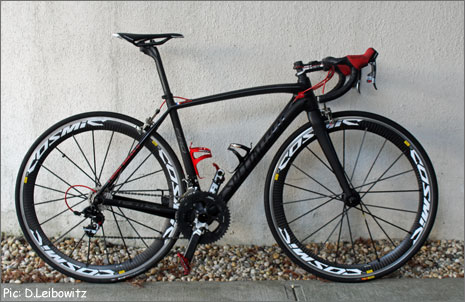 When did you buy it?
I bought the frame in September of 2012. The wheels were a gift from my team sponsor, and all other components were transferred from my old bike. 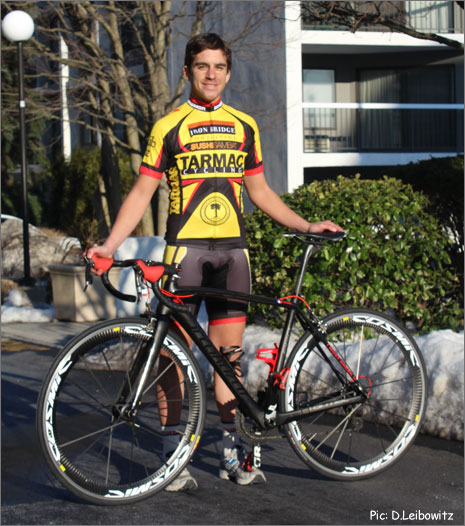 What made you choose this bike?
My first (and only) race bike was a Specialized Tarmac (s-works SL2). I produced good race results on it and I’m a firm believer in “if it ain’t broke, don’t fix it”, so I’m staying in the Specialized family. Also, the all black setup gives it a very badass look.

What modifications/additions have you done?
I reduced the spacing under the stem by about 5mm, but that’s all mechanically. I’ve also strategically placed some stickers around the bike to really make it my own.

The top tube identifies my bike with a little French flag and “P’tit Mec” (little guy), as that was my nickname growing up, and the seatstays display “I MUST BREAK YOU”, not only because Rocky IV is one of my favorite films, but also because, yes, I believe that I will break those I’m competing against. 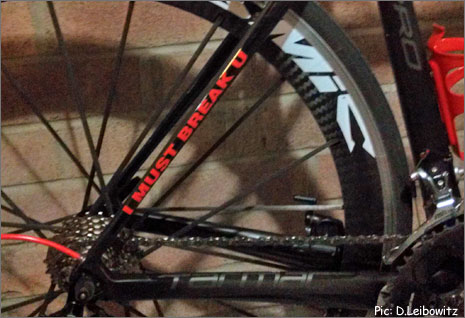 David makes his intentions clear with this sticker…. 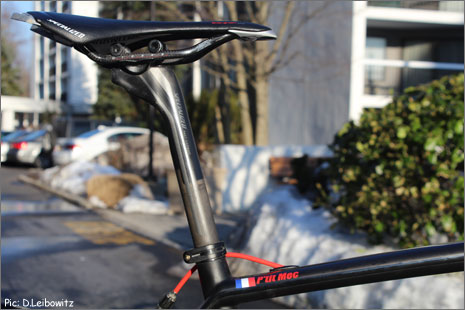 And then gives a nice nod to his French origins with this one on the top tube.

How many miles/kilometers do you do a year?
I’ve only been riding for two years, but last year my work situation offered me much more free time, so I really racked up the miles. From 01/01/12 to 12/31/12, I rode just over 27,000k, including racing. I normally average between 120 and 130k on each of my training rides, but I won’t go out if the high for the day is below 0 degrees Celsius. 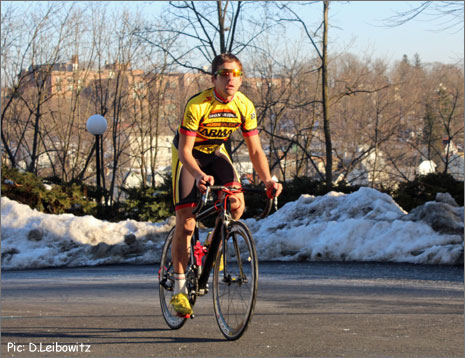 A cold Februray day with snow on the ground and summer clothing without a helmet? I’m assured that it was only for the photo, this is not how David normally racks up his big mileage.

Favorite riding area?
Northwestern Westchester County/Eastern Rockland County in Southern New York state ( 74k north of NYC). From my home in Bronxville, just outside the city, there is a 150k loop that takes me through the rolling hills of Bedford, Yorktown, and Peekskill, before I cross over the Hudson river to Bear Mountain (378 metres @ 5,2%), which is a very well paved, open climb, that rewards you with a view to the skyscrapers of NYC on a clear day.

Besides, Bear Mountain is a huge Strava segment in this area (over 1200 separate times), and I always try to move myself up the list when I go there!

Favorite riding experience on your bike?
Climbing Mount Greylock in northwestern Massachusetts. Although my first time was just this past October, I rode up the HC side and it was painfully fun. A fantastic experience, as it really lets you believe you’re suffering up one of the great European cols. At over 900 metres it’s one of a rare few climbs in the Northeast that offer a 10 to 20 degree temperature drop from bottom to top. In fact the next time I go up, I’ll bring more than just a neck gaiter and vest, as it was so cold on top I could only stay a few minutes before going back down! 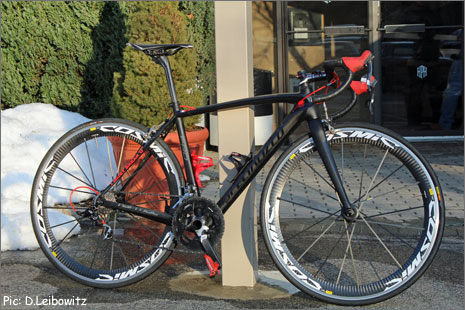 Last words?
This is the most difficult, most beautiful sport in the world, and I cherish every moment I’m pedaling. In my brief riding career, I’ve met many others who’ve been in the sport longer than I’ve been alive, and I’ve listened and learned. But there’s one conclusion I came to all by myself: sometimes you’ve got to ride until it hurts, and when you reach that point there should be only one thought in your head, “go faster”. 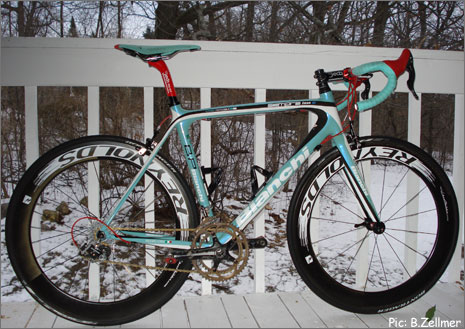 When did you buy it?
I purchased the frame from Competitive Cyclist when the frame came out. I rode in the 80’s and always wanted a Bianchi. I had purchased and still own a 2008 Bianchi 1888 and wanted a trick bike. I have always been detail orientated and the Barloworld bikes stuck out in my mind with the red accenting. The frame if I remember was $2100.00 USD.

Each piece I purchased as I went along. It has a Deda RS 1 Seat Post from Europe, Deda Zero 100 Stem, FSA Wing Compact 44mm bars along with Campagnolo Red Cables. The drive train is all Campy Record and an interesting acquisition. My team’s sponsor, Wheel and Sprocket had retailed a BMC with this group on. The customer was coming up short on funds so a deal was struck to replace this group with a lesser set up and I bought the Record group. It also has Planet Bike Cork tape along with a K-edge Garmin 500 holder and unit.

What modifications/additions have you done?
The only changes I have made really are to fit. The bike is awesome. I do have a pair of the same Reynolds wheels in 46mm with the same PowerTap Pro hub I use for Cyclocross. I use those for windy conditions. 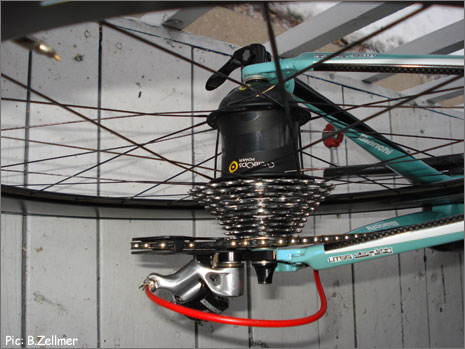 How many miles do you do per year?
In 2012 I rode, trained and raced 5600 miles. I would say 3/4ths on this bike. I race for a local team in the Milwaukee area, Velo Trocadero/Boucher.com. We are a team consisting of members of all categories in USA Cycling and race road and cross. I myself race road once or twice per month building for the Cyclocross season. 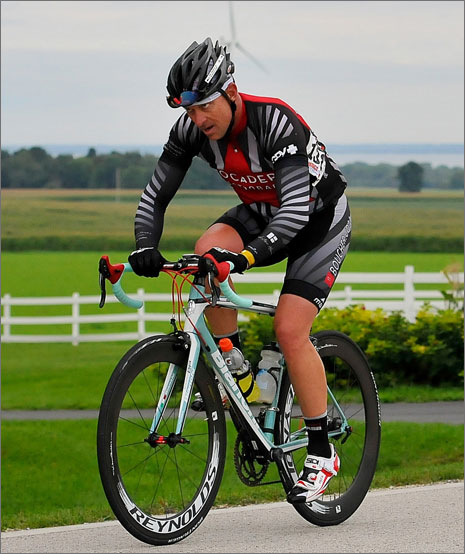 Barry putting his Bianchi through its paces in a local race. 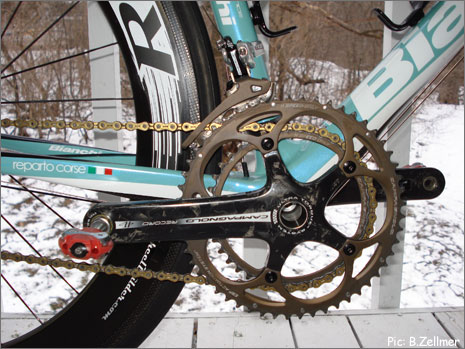 Campag was an easy choice for an Italian bike.

Future upgrades?
In the future, most likely next season I will build another Bianchi. Younger riders just do not understand the history and the beauty of the great builders. They say, “Sell your 1885”. I reply, “You don’t sell a Bianchi, you keep them.”

BMC: Stars Of The Future