We’ve seen a lot of custom bikes here at Readers’ Rigs but not too many that have such a history behind them as David from Oklahoma City’s Hans Schneider custom. Through 21 years of ownership this bike has been through a couple of different looks in that time as it’s accompanied David to France, Italy, Belgium and more in the early 2000’s and is still going strong today. 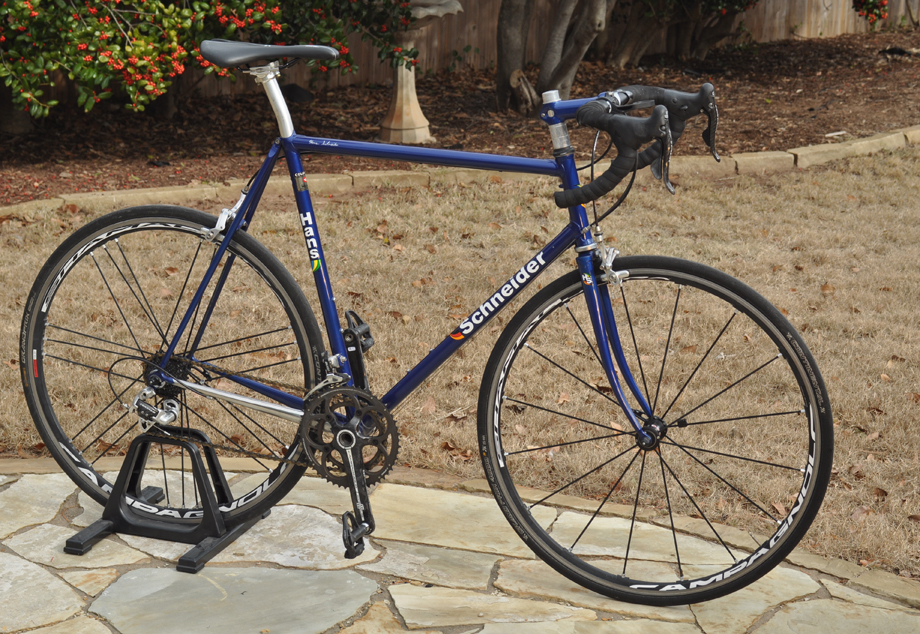 When did you buy it?
I bought it in the fall of 1998 in Houston, Texas after I started my first real job. It was the second major purchase that I made after buying a car with a working air conditioning.

What made you choose this bike?
I have very long legs for my height and always struggled with fitting on production bikes. I met Hans Schneider at the Houston Memorial Park Wednesday Night Crits and found that we had similar philosophies on bikes. Hans also was a major influence on my first trip to Belgium since he raced there in his younger days. I wanted a bike that was both good at criteriums and bumpy farm roads. At the time, I was a category 4 road and rode a lot of criteriums and time trials.

What do you love about this bike?
The bike is made of Columbus Neuron. The hallmark of this bike is the weight balance between the wheels and the ability to self steer through corners. It is just stiff enough for stable handling and prevent chain rub. The bike is the ultimate all-rounder in criteriums, time trials and road races. When I bought a custom Moots Vamoots about seven years later, the bike was converted to a TT bike with aerobars and tri-spokes for a few years. When I bought a dedicated TT bike, it went back to being an important road bike in my stable. It has always been the most dependable bike in my stable. 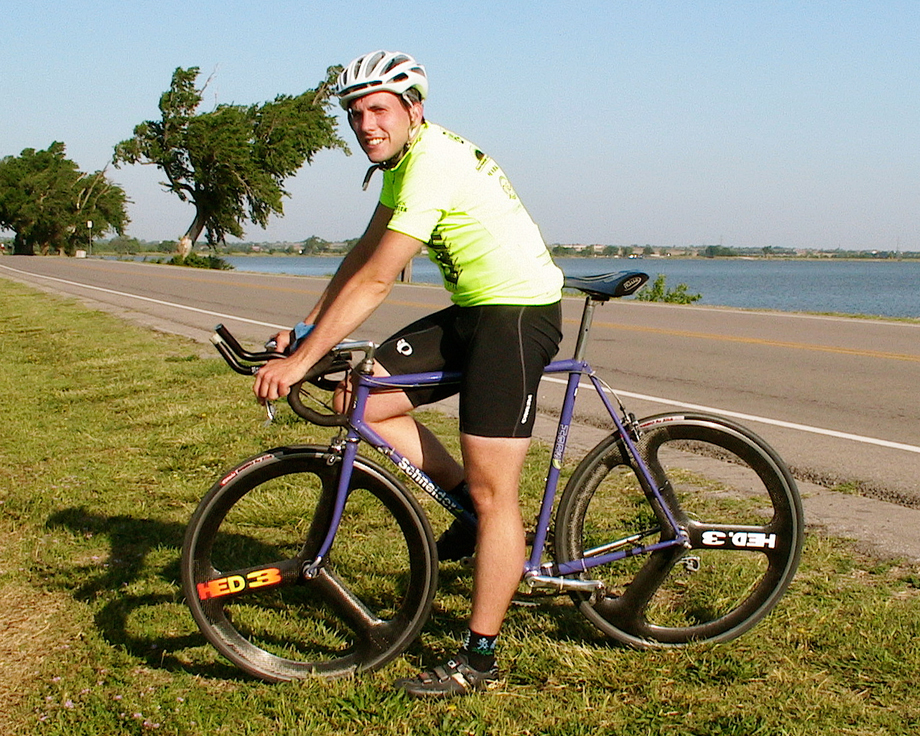 What components are you running?
This bike was built with Shimano Durace 9 speed. The bike has had Campagnolo Centaur 10 speed for last ten years so it could share wheels with other bikes in my collection. 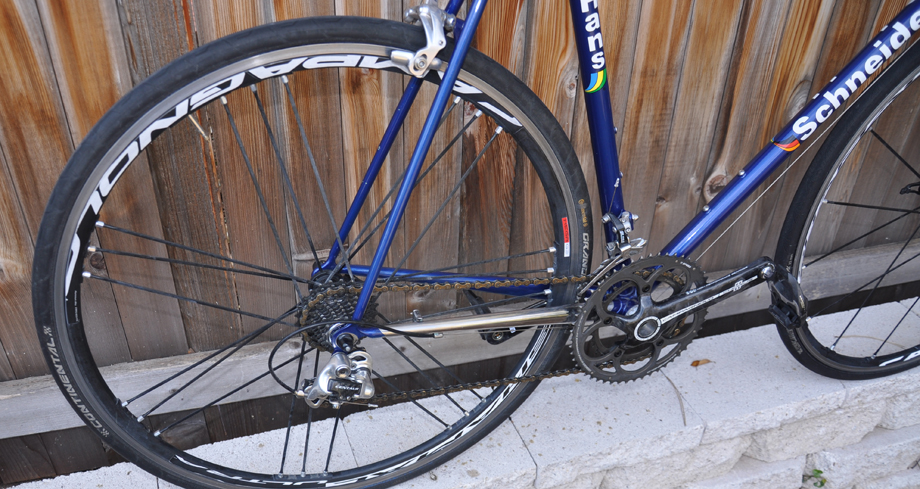 Favorite riding areas on the bike?
This bike accompanied me on my pilgrimage cycling trips to Belgium, France and Italy that I took in the first half of the 2000s. It has traveled many miles in airplane cargo holds and always came down the baggage carousel without delay. I made two trips to Flanders and Ardennes and had a lot of epic rides. On one of the last Belgian trip, the US Agriculture Department cleaned the bike during the mad cow disease scare. I took the bike on a trip to southern France and rode Ventoux, Galibier, Izoard and Alpe d’Huez. In Italy, I rode in Tuscany and in the Emilia/Romanga region northwest of Florence. I had a chance to see a stage of the Giro d’ Italia come through in 2005. The hills in that area are challenging but not epic and downhills are fun but not dangerous. The region is definitely is cycling heaven. 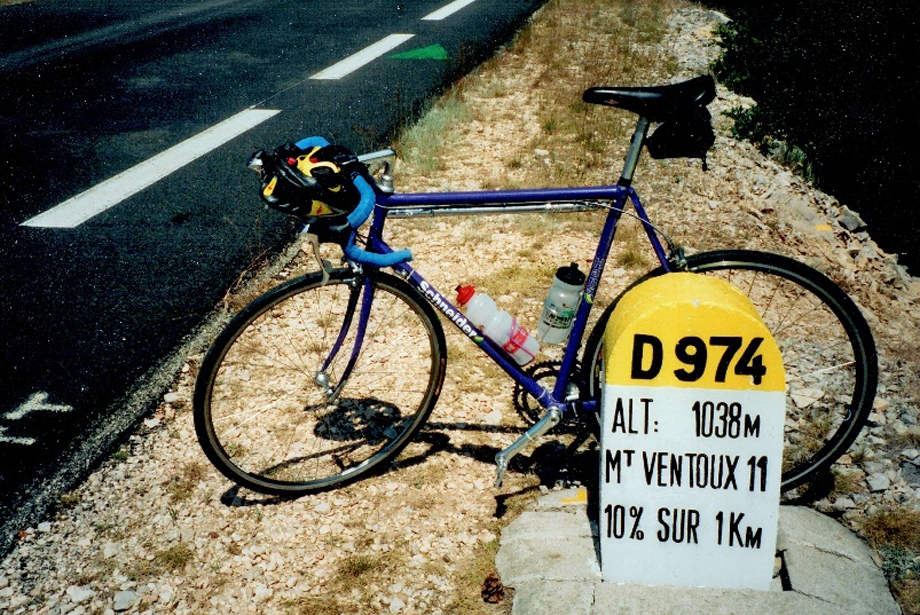 Retro pics from David’s epic trip to the French Alps… 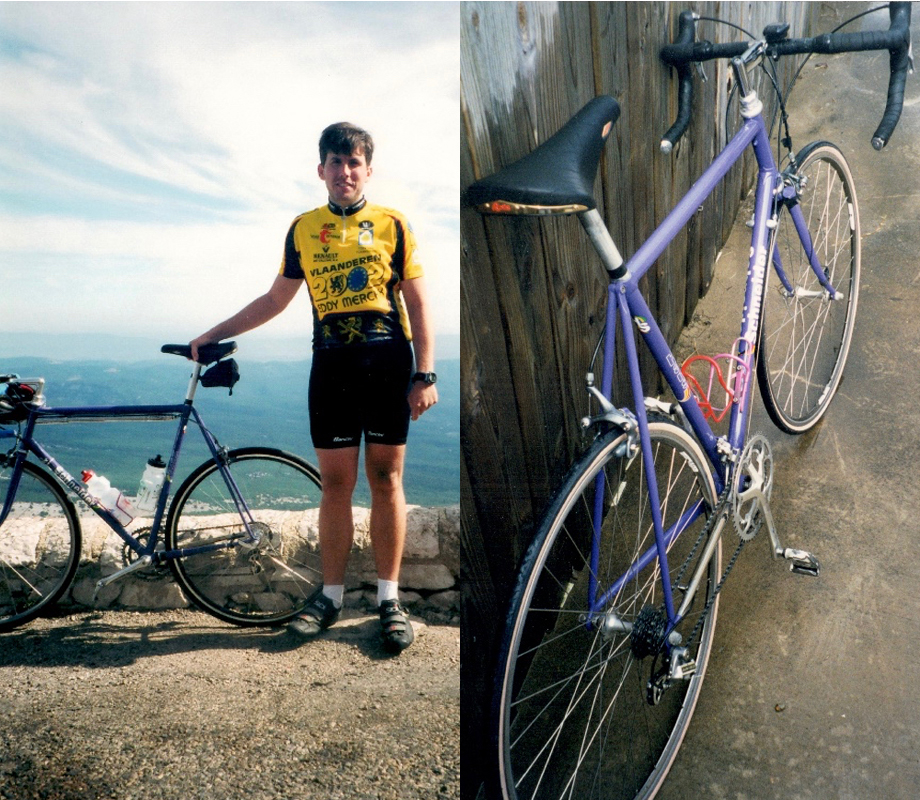 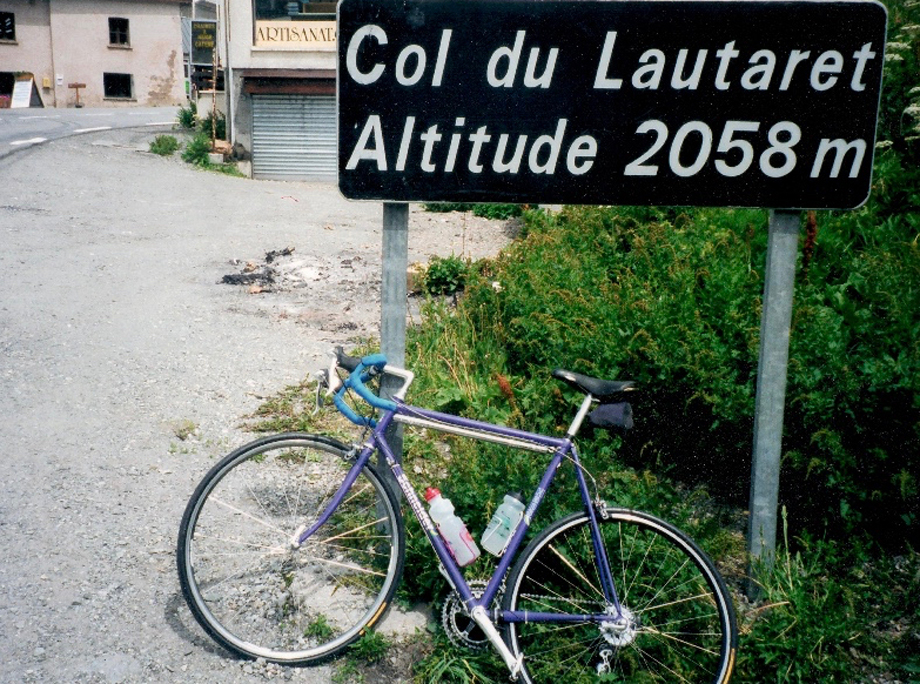 Favorite riding experience?
My best experience on the bike was at two Le Alpe d’Huez cyclesportif events in 2002, the La Grimpe’e de l Alpe and Grand Prix d’Rousses. I finished the timed mountain climb event and collected my time certificate under beautiful sunny skies. The next day, I rode the Grand Prix d’Rousses. It is a short 40 kilometer event that climbs over the famous climb, descends back down to the town of Huez and turns to finish at the climb to Vaujany. Cold rain poured. My hands were frozen solid as I clamped the brakes all the way down the mountain. I missed my turn at Huez because the rain was falling so hard and could not see arrows on the road. I definitely support the extreme weather protocol in professional cycling. These two events are definitely highlights of my career palmarès. 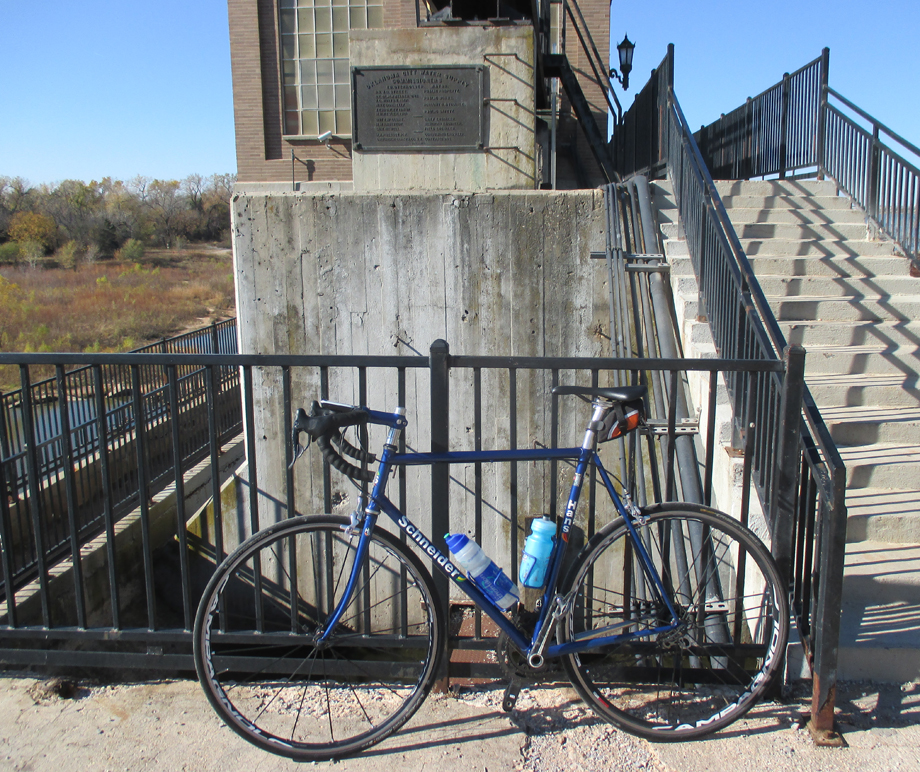 Oklahoma 2016 – A long way from the Alps and many years later but David is still loving his bike.

What modifications have been made?
After 18 years of riding, I had Hans repaint the bike due to wear and corrosion. I also wanted to upgrade the ergonomics in the handlebars. During the overhaul, he replaced the steerer tube on the fork to accept a modern stem and handlebar. I prefer the ergonomics of brake hoods on the new handlebars. The original down tube shifter bosses were removed and replaced with cable stops. While the bike lost some of the retro look, it is much more rideable. The bike feels as new the day that it was built. It is my preferred bike for long rides and centuries where the vibration dampening is a clear advantage over weight. 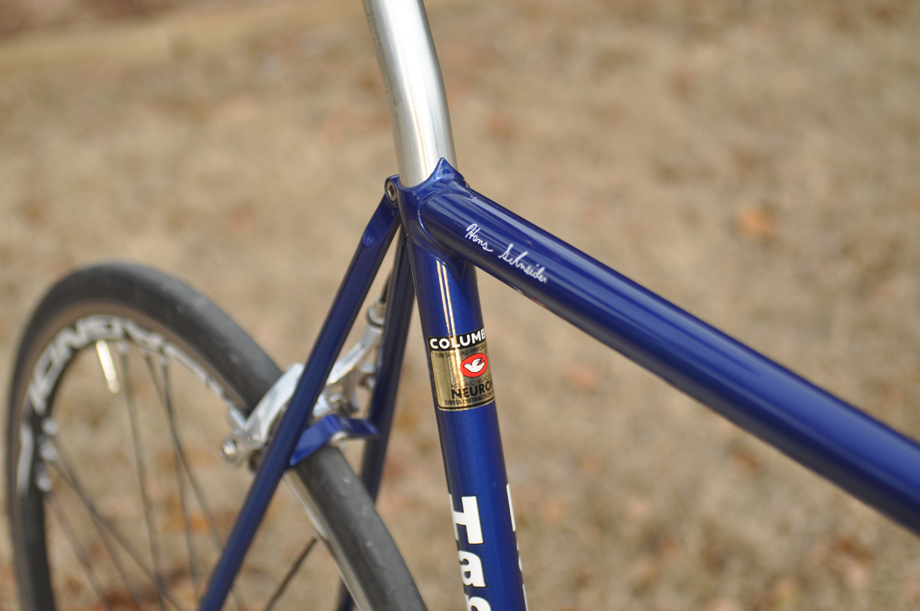 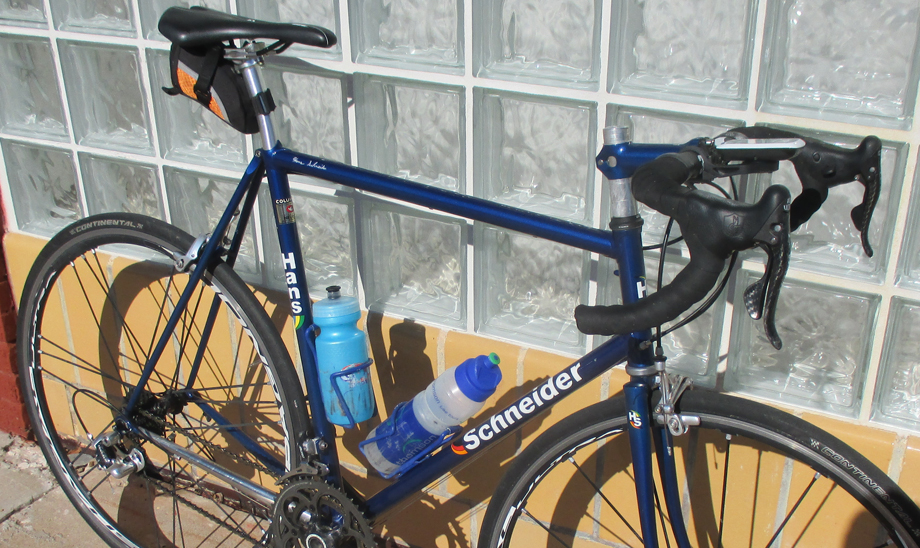 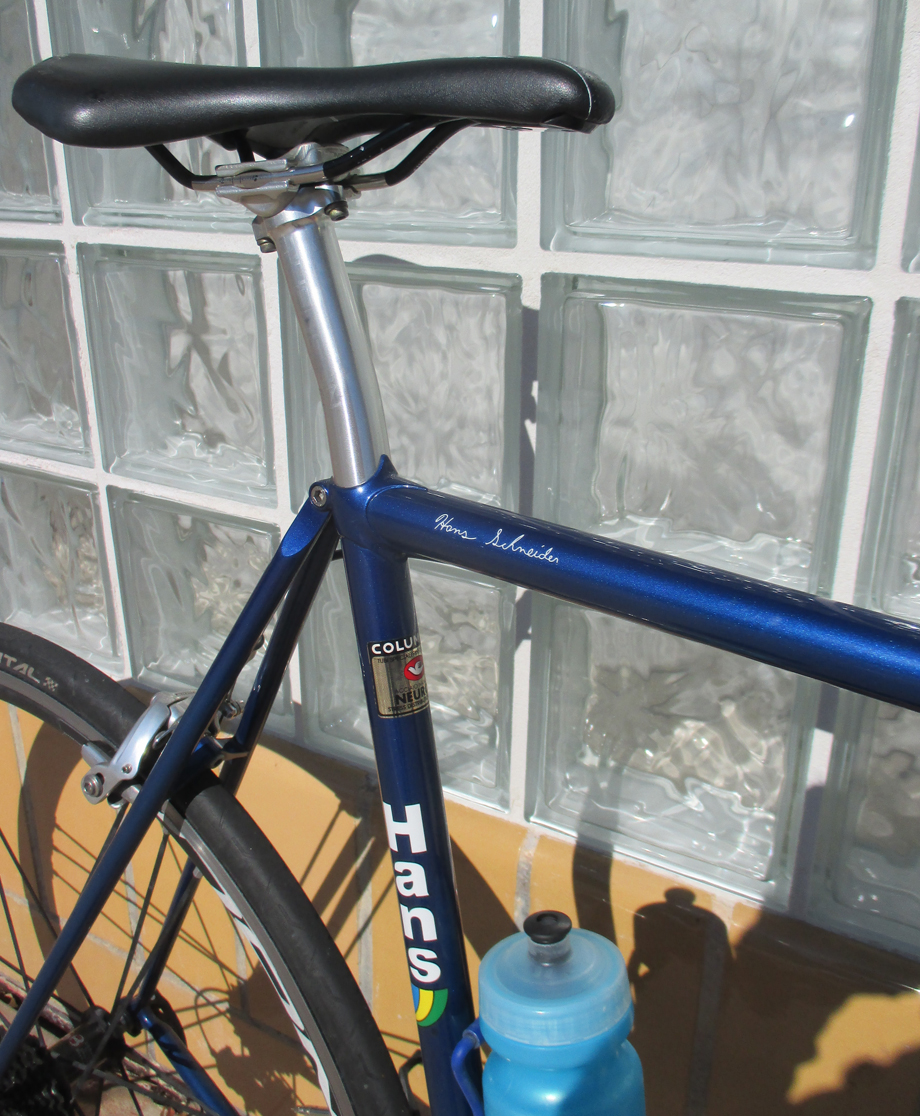 Future Upgrades?
I would like to complete the upgrade to Chorus 11 speed.

Last Words?
I look forward to riding this bike another 21 years if metal fatigue allows.

Thanks to David for sharing his ride with us. Got a bike that you’re proud of? Well how about sharing it with fellow PEZ fans and getting it featured in Readers’ Rigs so we can all stare at it! Send us a Readers’ Rigs submission direct to [email protected] and your bike could be featured in all its glory here on the pages of PEZ.