Karl Strugnell has come back to cycling after a break and is making a good go at it. But what about his bike? Specialist frame builders Reilly have built him a titanium work of art, which is also the perfect tool for his big return to the sport. 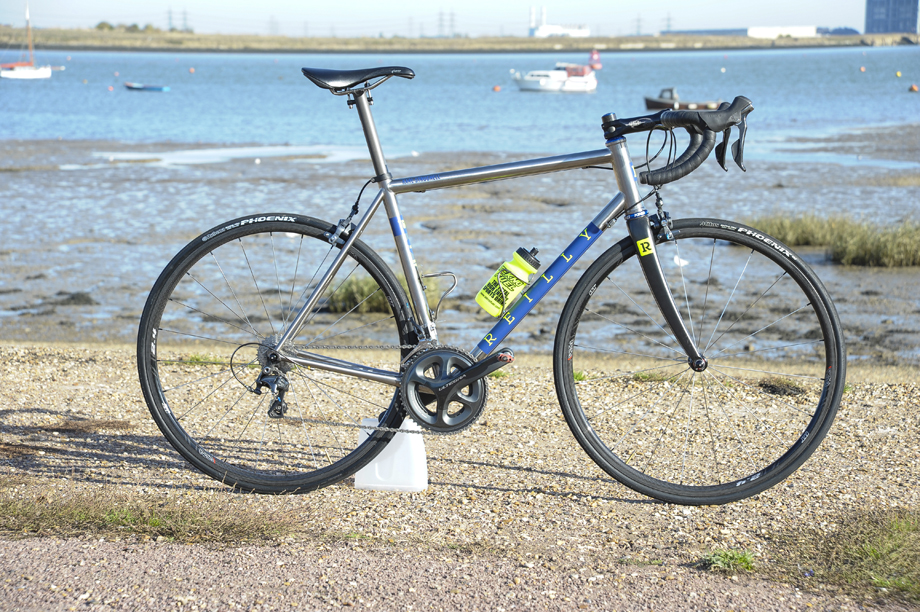 Carbon may dominate the pro peloton but for some riders – those who are not dictated to by sponsors’ demands – wonder metal titanium is what you want underneath you.

Englishman Graham Strugnell contacted us recently to ask if we’d be interested in running a feature on his son Karl’s new Reilly machine. Karl was a fast juvenile – a British medallist on the track -and junior and as a senior a multiple Kent Division champion – from rollers to hill climb to time trials. 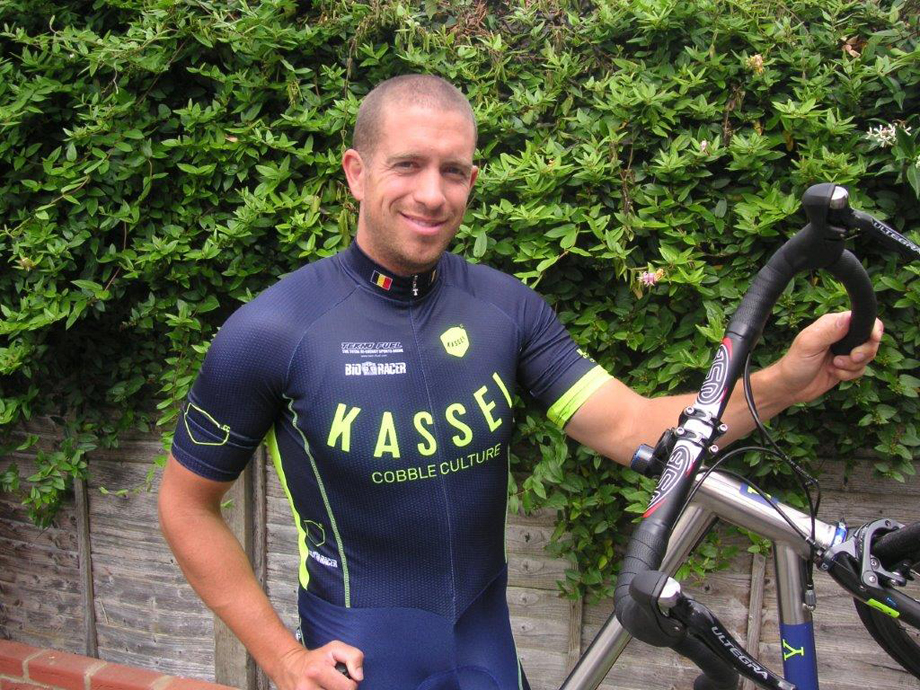 Karl’s has come back to sport to race for Team Kassei-Tekno Fuel after an absence and wasted no time in approaching his long term collaborators, steel, stainless and titanium Gurus, Reilly Cycleworks. Graham, explains; ‘we wanted a pure race bike, one that did the job rather than just looked pretty, for example we didn’t go for big deep sections rims. They look great until you’re in a bunch with amateur riders and a cross wind. . .

‘Pure race tool’ or not, it looks pretty darn nice to us. We had a wee look to see what Reilly say about themselves:

‘REILLY Cycle Works has three founders Damon Fisher, Neil FitzGerald and our frame builder Mark Reilly. Mark has established himself as one of the UK’s pre-eminent British bicycle designers having created many hugely successful frame models/designs for brands such as Omega and Enigma. Carbon specialist Neil FitzGerald joins us from Formula One and the award-winning Damon Fisher is our graphic and product designer/director. Mark, Neil, and Damon have been friends for many years and their experience and talent combine to make REILLY the beautiful brand that it is.

Creating cycles in two locations in England. Our HQ is in Brighton on the South Coast of the UK, the team here are developing a new range of components, including carbon wheels and forks. Our carbon frames are made in our sister workshop near Silverstone in the heart of Formula one country. Reilly Frames are made from carbon, steel, stainless steel and titanium and almost all are custom made. We started out life as Nerve bicycles but so many customers asked for Mark’s name on our frames and bikes we decided to change the brand to Reilly Cycle Works, nothing else changes.’ 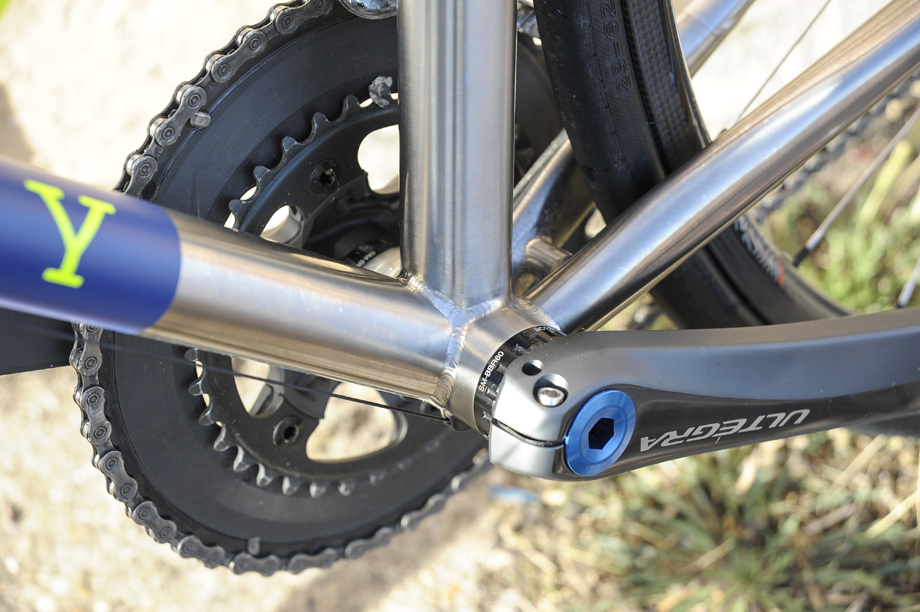 OK, first off let’s look at the equipment on this metallic gem – SR 71 spy planes aren’t skinned with this wonder metal for nothing.

Chainset: Shimano Ultegra
Brakes: Shimano Ultegra with USE Nanotech brake blocks.
Headset: Chris King
Seat pin: Carbon Reilly
Saddle: Fizik Aliante carbon
Bars & stem: USE – Graham and Karl Strugnell and Reilly Cycleworks have had a good relationship with English component specialists USE for many years – the components are chosen for their reliability and quality. Bars are the 44 cm. aluminium Summit model chosen rather than carbon – in case of a tumble the bike can be ridden with bent aluminium bars but not broken carbon ones, the stem is also by USE a big 130 mil. job. 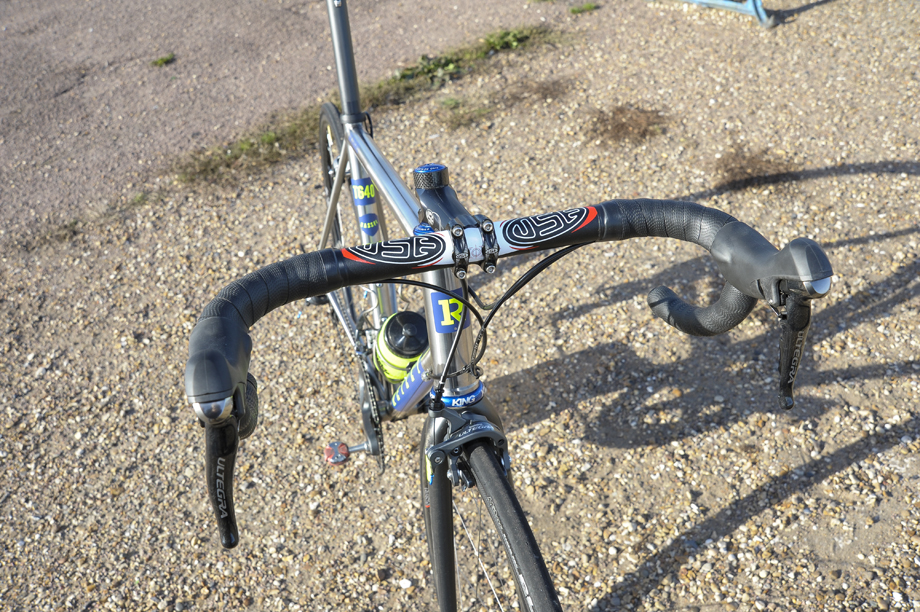 Cables: Jagwire brake and gears
Wheels: USE carbon road 2.4 clincher.
A shallow rim was chosen for the weight saving and the improved acceleration as well as stability in cross winds. And they’ve chosen USE (Ultimate Sports Engineering) titanium ‘Spin Sticks’ to clamp the wheels. Tyres: MITAS Phoenix pro (a new name on the scene) but a good tyre weighing in at 210gms. 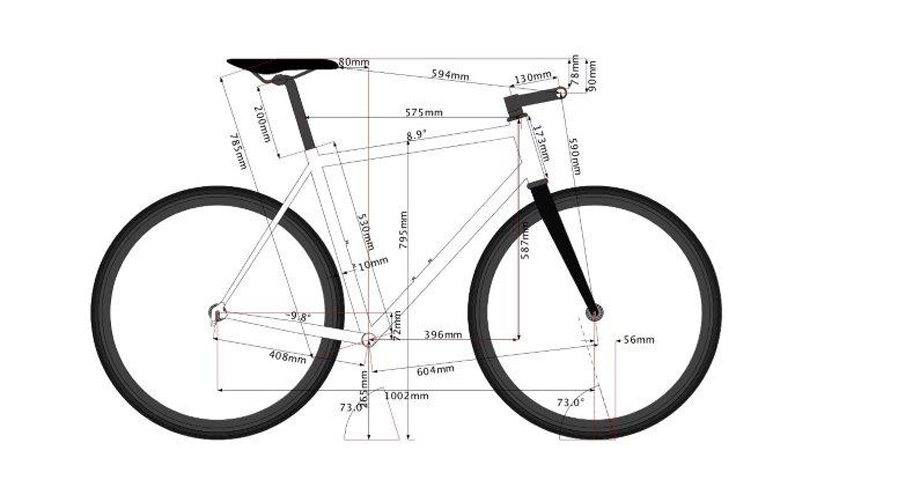 Karl rides the bike in criteriums and road races; we asked why go for bespoke rather than off the shelf – and why Reilly Cycle works?
It was a natural choice; Mark Reilly has supported Karl on numerous occasions since he was 13 years-old with various teams and projects. When Karl decided to get back on the bike a phone call to Mark was met with a instant “no problem come down and we‘ll measure you up for a frame.”

Mark wanted to make a custom frame to maximise the comfort and probably more important the stiffness and handling in the finished bike. That’s the reason for choosing the T640 tubing which is far stiffer than other titanium tubing on the market. If I tell you that super-strong ex-pro Sean Yates is a regular client of Reilly’s that tells you a lot about the strength and stiffness of the frames.’ 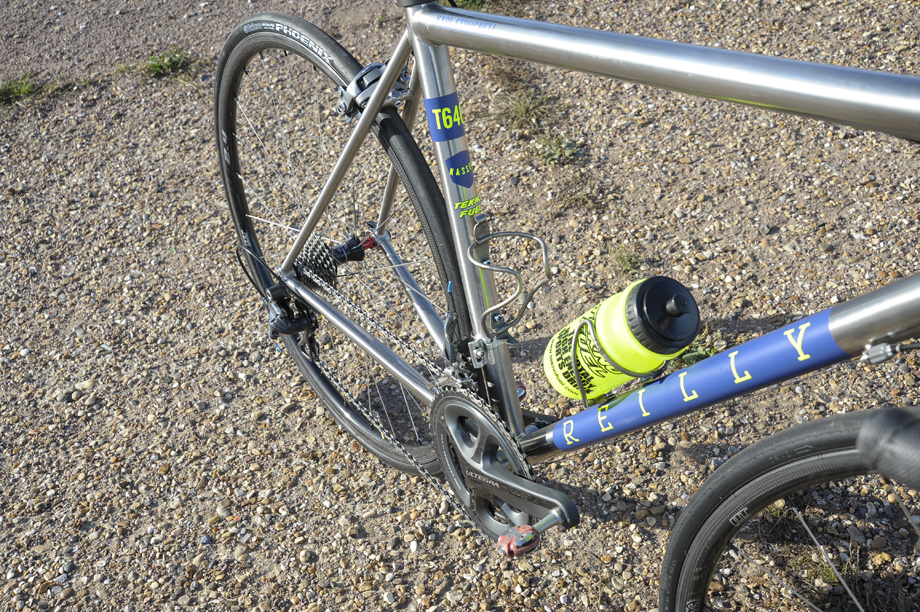 We asked why go for titanium and not carbon?
Mark Reilly is very well known for his titanium frames – but he also builds with Columbus Spirit steel – and we decided that titanium would be a good way to renew the partnership so to speak. And much as Karl loves titanium there’s a new carbon frame for next year being custom built by Reilly to our spec. 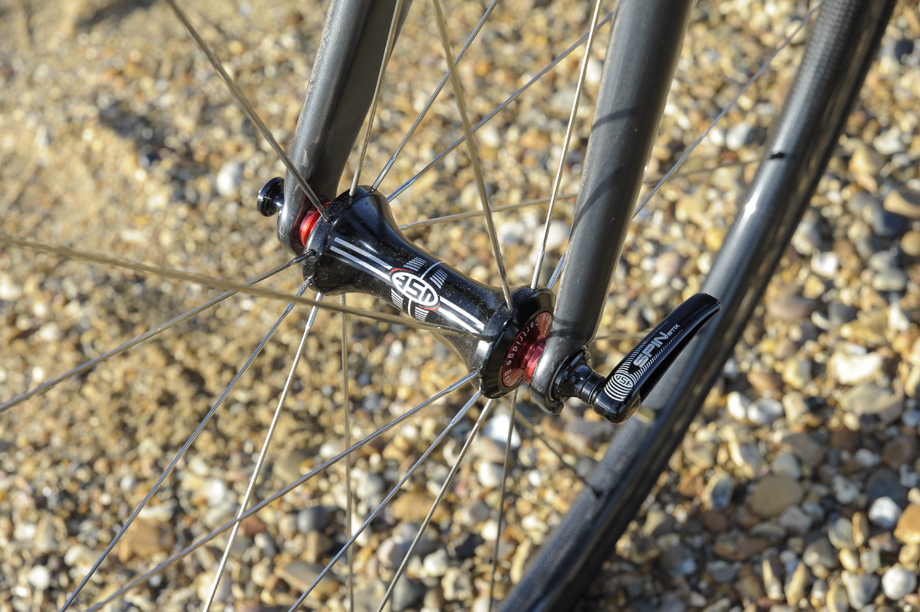 The frame is titanium but why carbon forks?
Weight comfort and the edge they give to the handling. 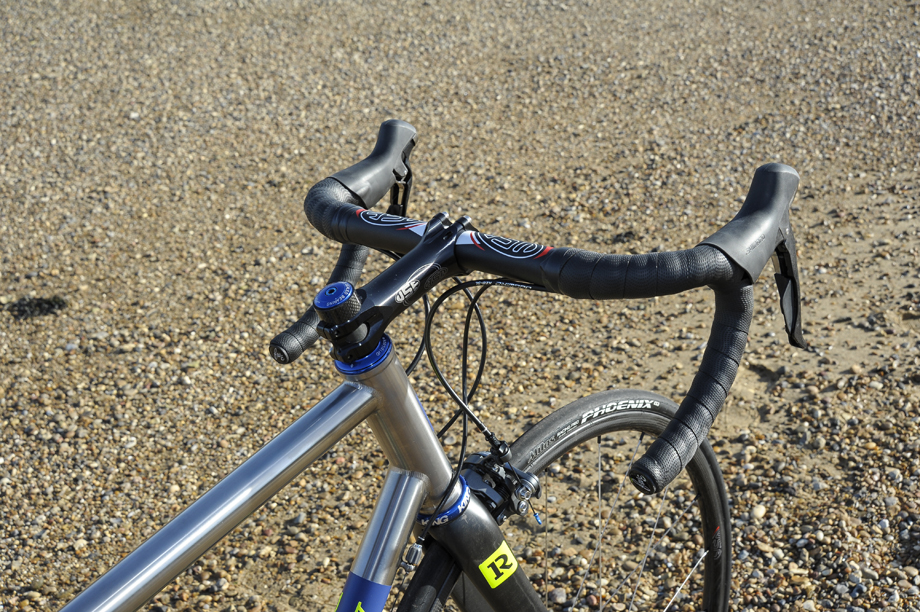 And to close, $64,000 dollar question; how does it ride?
Because it’s a custom build it’s a perfect, very comfortable fit but when he does step on the pedals it’s the stiffest frame he’s ever ridden. Karl went from third cat. to second cat, on it before knee problems curtailed his season – but it’s a great machine, it does the job.

Not much more you can ask of a ‘tool.’ 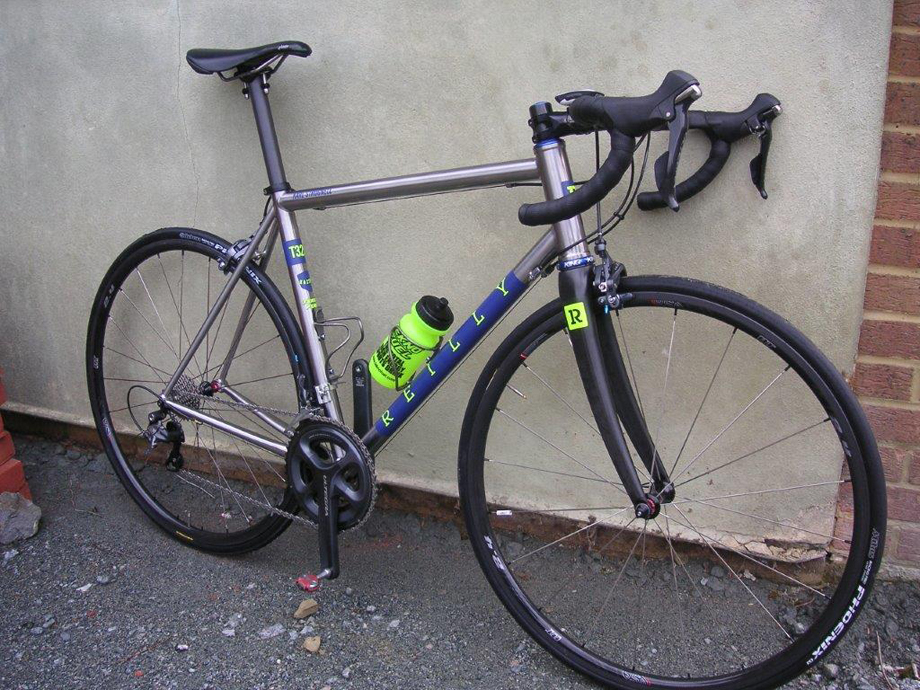 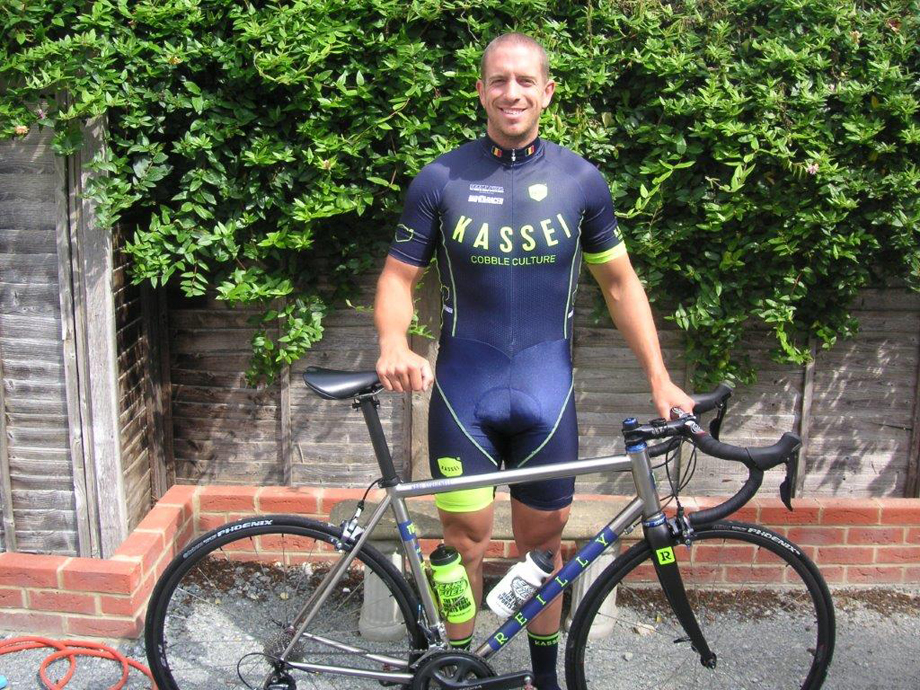 Got a bike that you’re proud of? Well how about sharing it with fellow PEZ fans and getting it featured in Readers’ Rigs so we can all stare at it! Send us a Readers’ Rigs submission direct to [email protected] and your bike could be featured in all its glory here on the pages of PEZ.