Today we look at an iconic Readers’ Rig. A custom steel bike with a difference, based on a Shimano promotional poster from the ’80s. With the frame copied perfectly from the poster the owner himself then hit the spraybooth to paint his creation with the result being such a cool bike that Shimano themselves bought it and now have it displayed in their bike museum in Japan! 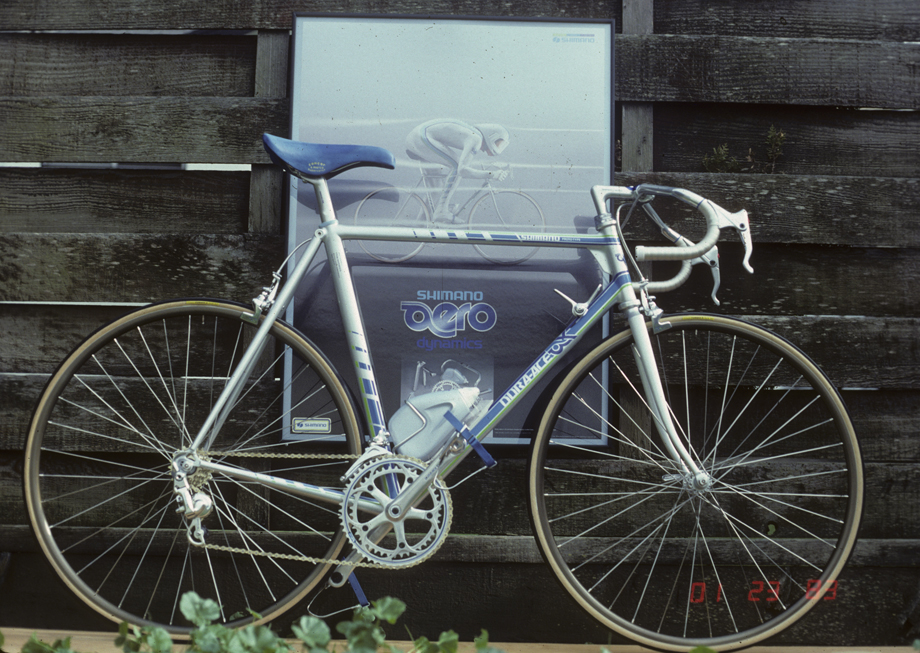 We’ve had all sorts of Rigs featured on PEZ since the Readers’ Rigs column was born back in 2012 and it was one of those early bikes that still has people talking almost six years later – George from San Diego’s four speed straight blocked Fondriest. (Yep 4 rear cogs for 8 gears total).

Well, this time George has sent us in a submission from another completely left of centre ride and this one’s so cool that it’s actually displayed in the Shimano bicycle Museum in Osaka Japan.

The fact that this bike is a museum piece and not an everyday machine makes the standard Readers’ Rigs question list go out the window so instead we’ll just let George himself run us through the story behind this cool bike and let his retro vintage photos tell the rest. 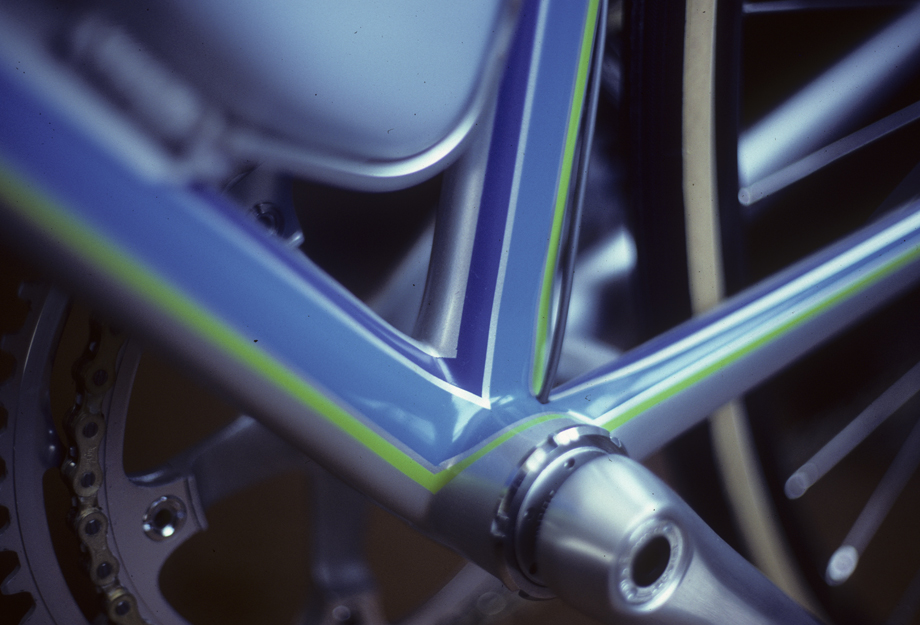 “It was 1981 when Shimano introduced the Dura AX system components. My brother Mike just got back from the New York Bike show that year bringing with him a Shimano trade show poster for me. From that poster my AX project was born.

I don’t believe they ever had a working AX bike at the time. I purchased the AX groupo from a local bike shop, I then asked them who a good local builder was. I lived in the San Francisco bay area, so there were plenty of frame builders around. I brought the poster to Jevelot and had him make what he saw. Using Tange aero tubing of the day he called me about a month later to tell me it was finished. When I told him I myself wanted to paint it, he was a little hesitant, not wanting to have his beautiful frame sprayed by some kid. At the time I was a custom car painter, and told him not to worry.

95% of the graphics you see in the photos is paint, not decals. Being a life long artist decals wouldn’t do. Working in a shop allowed me to mix my own colors and paint the frame in a controlled environment. All lacquer, the base coat is a modified Toyota silver, and the graphics are color matches of the Shimano logo colors. 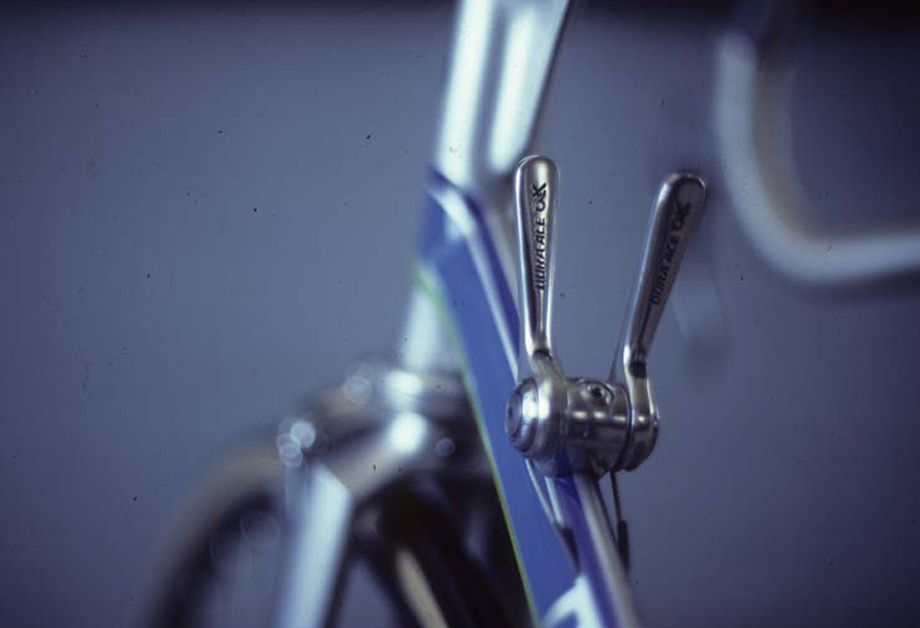 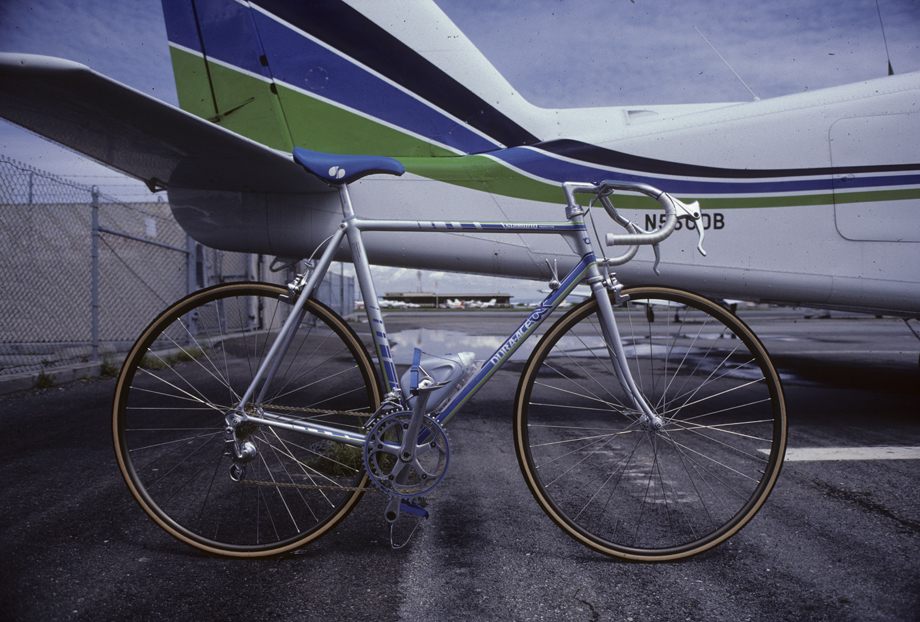 The clear coat was wet sanded and cleared again and again until you could run your had along the frame and not feel any graphic edge. Hand rubbed until a glass like surface was achieved. I rode the bike once, a 50 mile ride, hoping the whole time I wouldn’t get any rock chips! 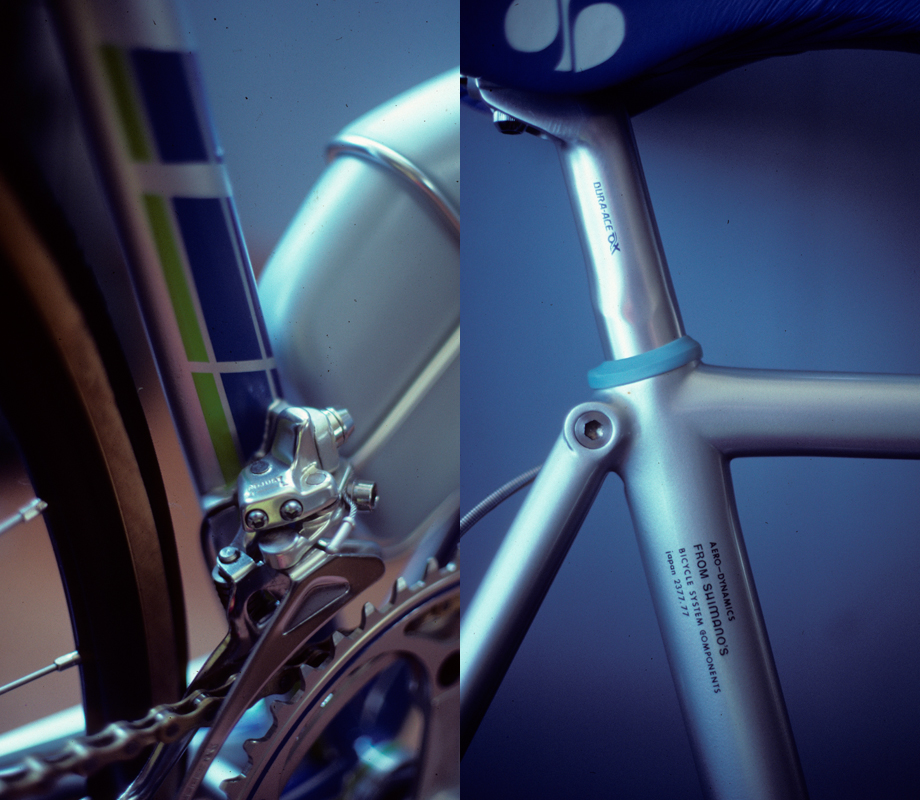 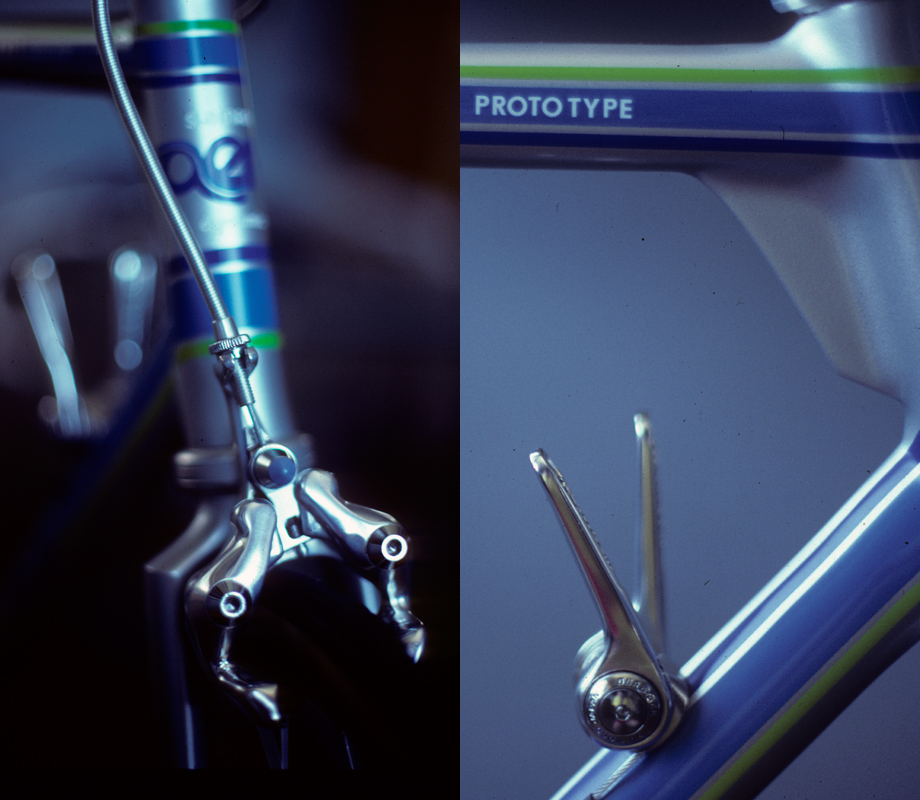 It weighed in at 23lbs., and cost me a total of $1,700 (remember those days?). Since I was measured for the bike it felt great, all in all a nice ride. From 1981 to 1995 the bike was stored. A move to Maui brought the bike to a local frame refinisher to try and sell for me. He brought it to a trade show where Shimano people saw it and bought it. 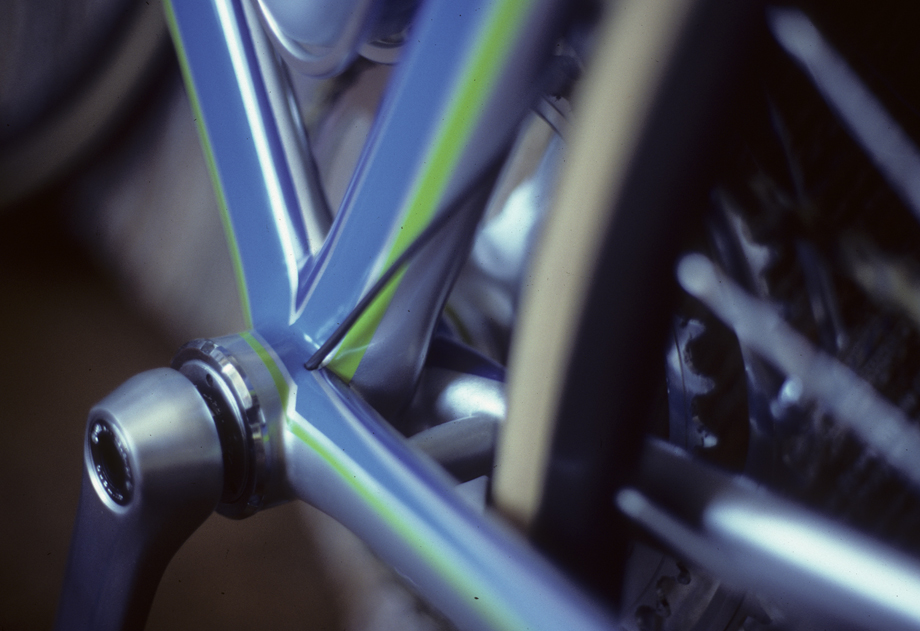 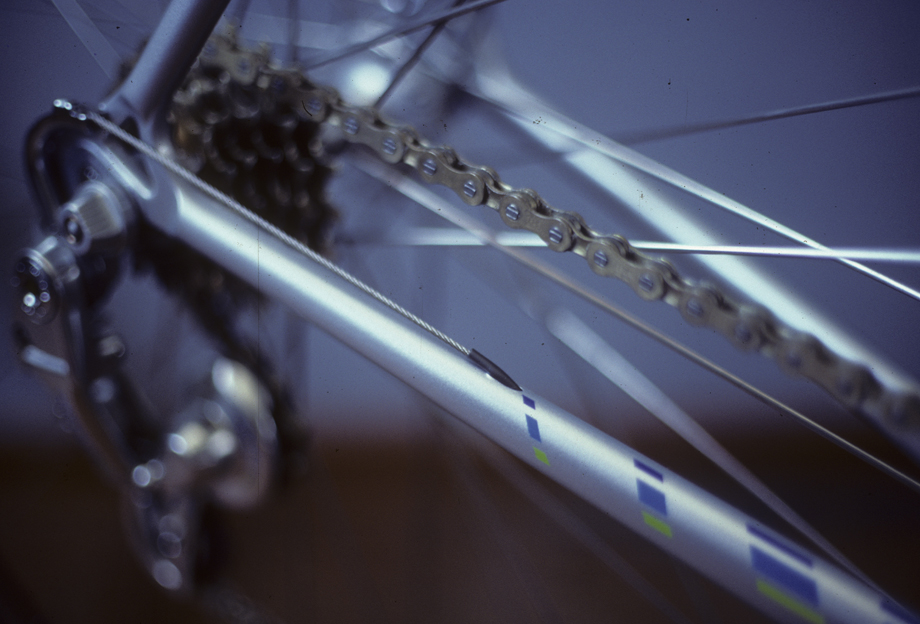 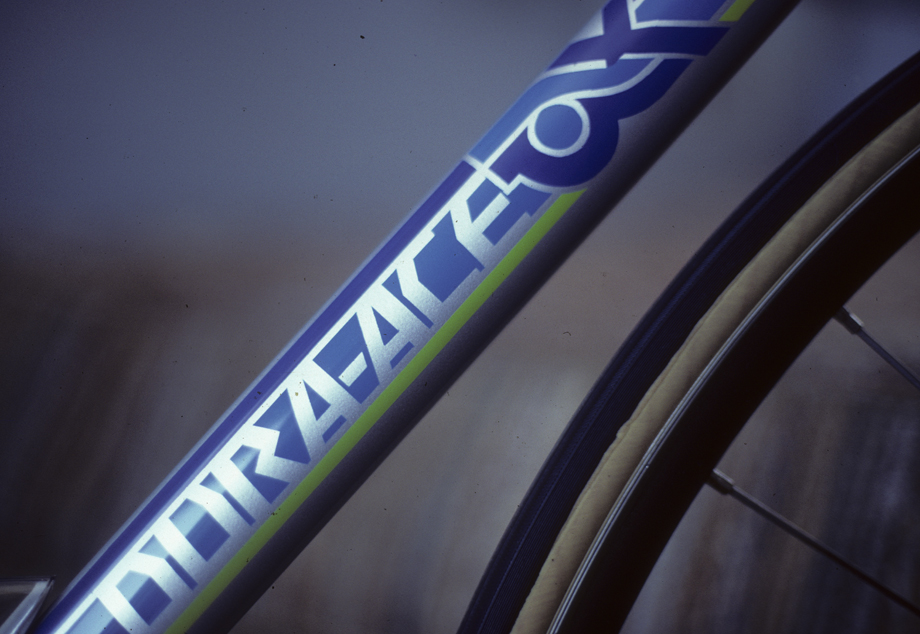 I was happy that they had it. There was always the thought of either Shimano is going to see this some day and love it, or be sued! Now it happily sits in the Shimano bicycle Museum in Osaka Japan.” 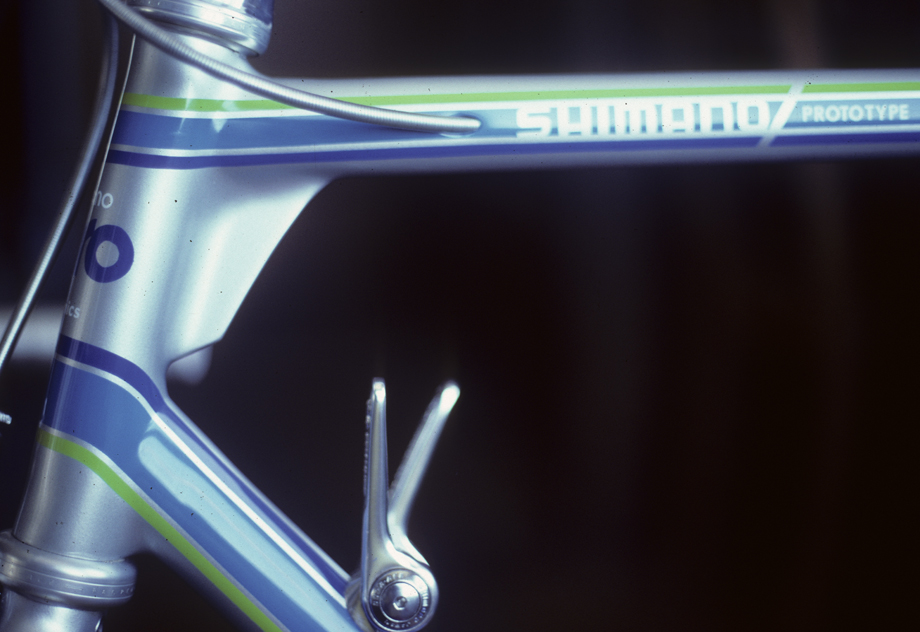 Thanks to George for sharing his ride with us. Got a bike that you’re proud of? Well, how about sharing it with fellow PEZ fans and getting it featured in Readers’ Rigs so we can all stare at it! Send us a Readers’ Rigs submission direct to [email protected] and your bike could be featured in all its glory here on the pages of PEZ.

No Normal: How I Tried to be a Professional Cyclist in 2020