Let’s forget about the whole USADA saga for a moment and concentrate on what our sport is all about, beautiful bikes and the fun we have on them. With that in mind, it’s time for the 2nd installment in our new column of Readers’ Rigs!

So what’s a reader’s rig? Well it could be anything from a $500 special to a $15,000 dream machine – it’s not the price of the bike that’s important but the story behind the bike. Who hasn’t participated in a bit of voyeurism in your local group ride? How often in life can you ogle another man or woman’s loved ones, touch them and even ride them if you’re lucky? So it was with this voyeuristic attitude that the new Readers’ Rigs column was born.

We whet your voyeuristic appetite with our first Reader’s Rigs article on my bike and now it’s time to check out 2 Pez Fan’s steeds:

When did you buy it? In the spring of 2004 on sale at an internet shop for almost half off (just under $3600) to replace my old Fuji Roubaix steel framed beast. 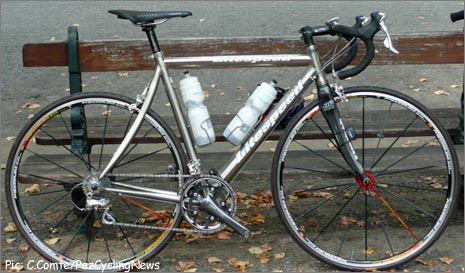 What made you choose this bike? I had been looking for a new bike for a couple of years, and everytime I looked at a titanium frame I couldn’t stop drooling, but didn’t have the money for one. In the summer of 2003, my mother passed away from complications of a double lung transplant. Before she passed she told my brothers and I that she was leaving each of us a small amount of money and she hoped that we could use it for something we would never be able to do otherwise. After some consideration, I decided to buy the bike in remembrance of her; it has been a living memorial to her ever since!

What modifications/additions have you done? I replaced the old wheels (Ksyrium Elite’s) with Ksyrium ES’s, changed seatpost/saddle (came with a Easton EC-70 seatpost which didn’t work that great and a Selle Italia Flite saddle), and replaced the 9-speed D/A cranks with Ultegra SL compact cranks a few years ago (which came in handy on my trips to the French Pyrenees).

What components are you running? Everything is Dura Ace 9-speed except for the cranks, 12-27 cassette, Thomson seatpost, and ITM Milennium bars and stem.

Favorite riding area? Would have to be the country farmland of southwestern Ohio – zero traffic and plenty of hills to keep you honest and the roads just seems to go on forever. 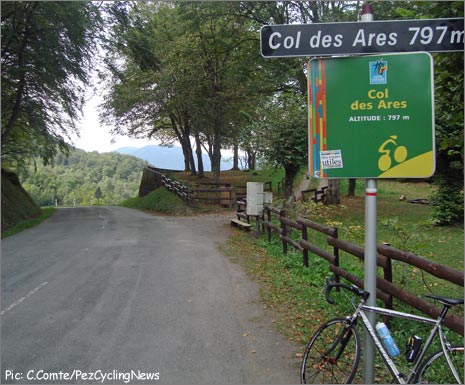 From the farmlands of Ohio to the mountains of the Pyrйnйes Chris takes his bike with him everywhere.

Favorite riding experience on your bike? Staying at the old Roquefort Cycle Lodge (now called Les Deux Velos) in the French Pyrenees and riding some of the great mountains made famous in the Tour de France. The countryside is quiet and there is very little traffic depending on when you visit. Mark and Elma (the lodge owners) keep you happy and well fed for riding up the mountains – they are the best hosts. Riding (and just being in) the Pyrenees is magical. When you go and see first hand just how steep the Tourmalet or the Portet D’Aspet really are it gives you a whole new respect for the pro’s and how they can do it day in and day out at speed. 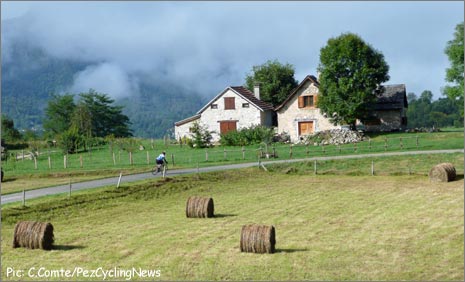 Future upgrades? I have bought a set of Mavic R-SYS wheels but just haven’t gotten around to putting them on yet. Other than that there really isn’t anything I would want to do to the bike – it is perfect. 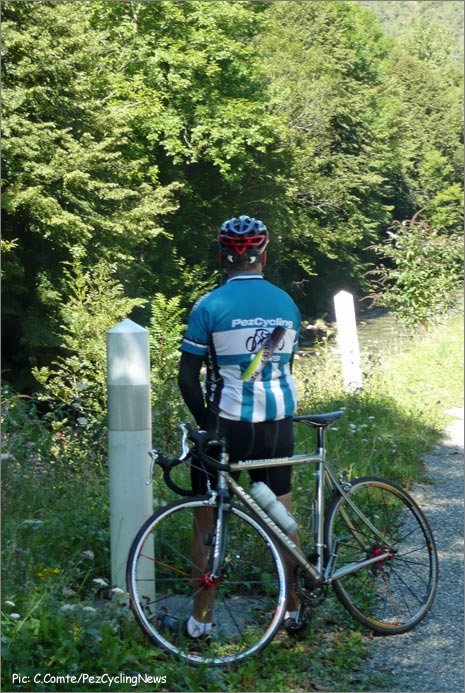 This is probably the moment where I should insert a smart pun about Chris pissing all over the competition with his Litespeed but instead I’ll just say, ‘Nice jersey.’

Last words? Titanium is the real deal … the ride of my Litespeed is other-wordly. The little bit of flex I can feel on climbs is far outweighed by the smooth, supple ride it gives coming back down. I just wish I had the legs to do it justice. 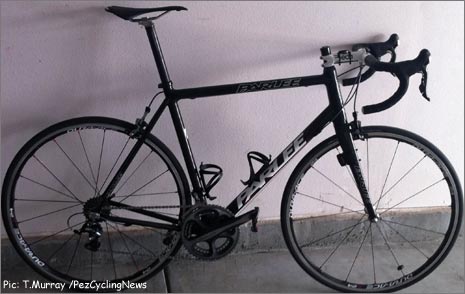 Todd’s internet risk ended up being nothing but reward with this beauty.

When did you buy it? I bought the frameset on eBay about 18 months ago from a Southern California gentleman who had chosen to swap over to an S-Works Venge. I was actually very apprehensive about buying a used carbon frameset online sight unseen, but, as luck would have it, same guy was buying his new frame from an old friend of mine, who vouched for his new customer. I ended up getting this very lightly used frameset for a ton less than a new one would run. In any case, I shipped the frame back to Parlee to have them sign off on it, and everything has been great ever since.

What made you choose this bike? I have owned more than my fair share of bikes over the past decade, but I’ve always been curious about Parlees. In fact, I came very close to buying a Z4 in the past. When I saw this deal on this (latest and greatest) Z5 ( PEZ reviewed the Z5 here ), I read a few reviews, and pulled the trigger.

What modifications/additions have you done? Since I bought it as a frameset, I actually took all of the parts off of an existing bike. I’ve changed a few things since then…moved from Dura-Ace 7850 C24 wheels to Mavic Ksyrium SLs, and changed the handlebar from a Deda Zero 100 aluminum bar to a Syntace Race Evo carbon bar.

What components are you running? I currently have a Shimano Dura-Ace 7900 group for drivetrain (175mm, 53-39, and 12-27) and brakes, with the one mod being Yokozuna cables and housing (if you don’t have this on your bike, get it – NOW). This decision was motivated as much by economics as anything else – I have classically enjoyed riding either Shimano or Campy, but the equivalent Campy Record 11 gruppo costs quite a bit more. The cockpit includes the aforementioned Syntace Race Evo handlebar and a Deda Zero 100 SC 130mm stem. Probably the most unusual (in the States) item on the bike is the USE Cyclops seatpost – probably the best lightweight one I’ve ever ridden. Once you tighten the head, it’s not coming apart – unless you really want it to (which is more than I can say for any number of other lightweight seatposts on the market). 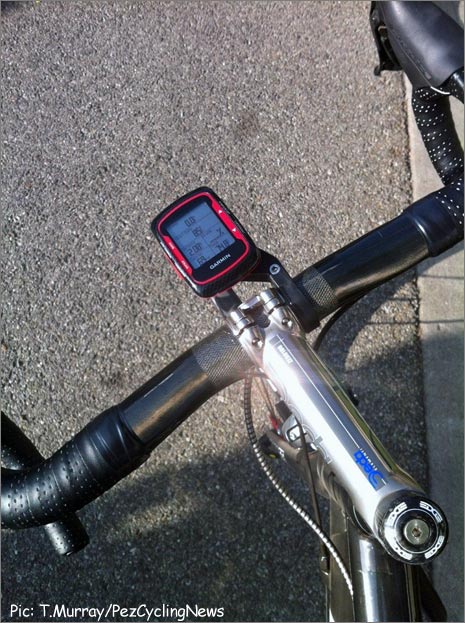 The view from the cockpit of Todd’s Parlee. That’s one long stem!

How many miles do you do yearly? Tapering back considerably since my wife and I started a family. It was about 8k miles (13,000kms) per year, and now closer to 5k (8,000kms). Work, family, and fatigue have taken their toll! 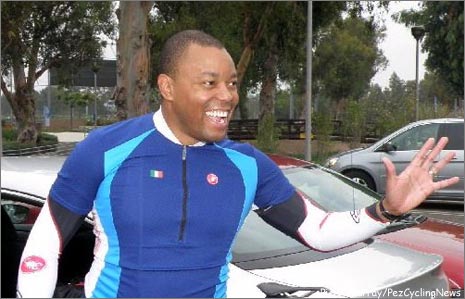 Todd’s got a lot to smile for. Nice bike, new baby and all that goes with it, but more importantly he’s published in a Readers’ Rigs column!

Favorite riding area? I am lucky to live in one of the best riding areas in the United States, right next to the Santa Monica Mountains. Unfortunately, I’m allergic to altitude gain, so I don’t have the ability to appreciate it. I prefer the fast (flatter) group rides in Orange County, California, like Como Street. I always tell my friends in Orange County that the hilliest ride there compares to the flattest ride in the Santa Monicas.

Favorite riding experience? I thrive on hurting myself and others on the Saturday Morning World Championships, so I’d have to say the day that I won all of the Intergiro sprints on the Canyon Velo ride would be my best experience on this bike. 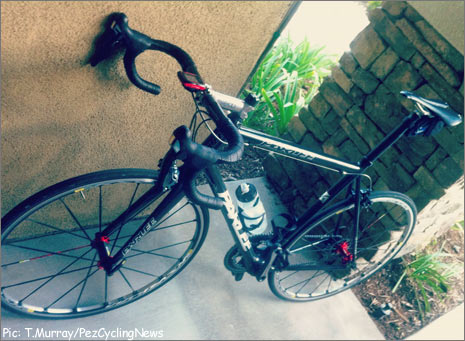 No matter what angle you look at it from, Todd’s bike seems like a pretty sweet ride.

Future upgrades? I’m still really on the fence on this one…although I really enjoy this bike, I recently acquired a new one, that I like just as much. If I decide to keep the frameset, I’m seriously considering selling the Shimano parts and jumping ship to SRAM Red 2.0. I always disliked the previous rendition of SRAM Red ( PEZ reviewed the new SRAM Red here ), but I’ve been able to spend some time on the new parts, and I’ve been really impressed with the redesign.

Lance Busted: But Is It Over?