This Trek is a special bike for many reasons: It has suspension, it has ridden Paris-Roubaix, it’s an ex-team bike and it holds great memories of a wonderful man who is no longer with us. Martin Clark put the bike together in memory of his friend and took it back to Roubaix. 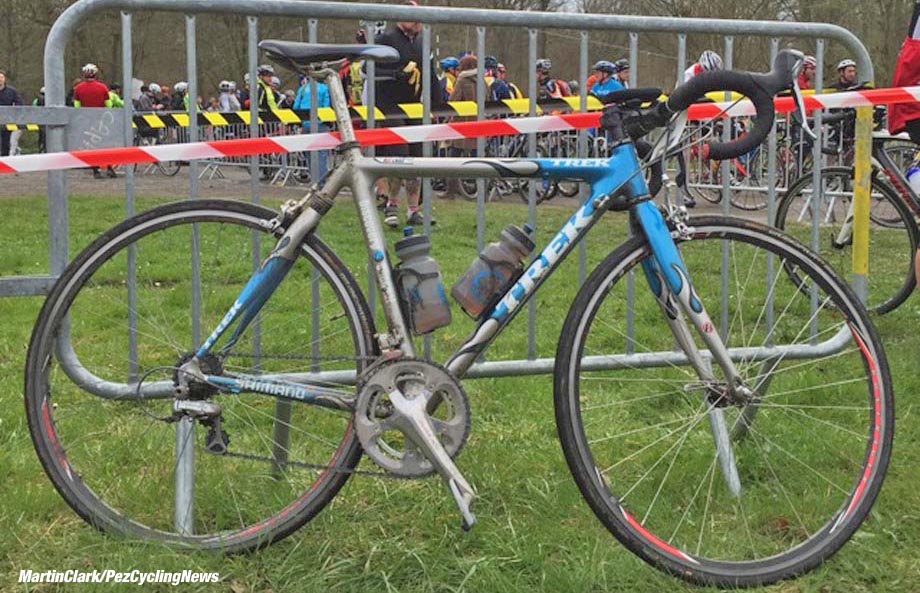 There is a big story about this bike, can you explain?
Yeah, in 2008 myself and my friend Alan Hewitt bought a couple of these Trek ‘team issue’ Paris Roubaix frames from a mutual friend who used to work for the Discovery Channel Pro Cycling Team. I got Tony Cruz’s as he rode a 54cm, Alan got Stijn Devolder’s, a 58cm. [PEZ Interviewed Tony Cruz here.] I was a fan of the team so decided to build mine full team spec almost to the exact detail, Alan just cobbled his together! We used to go to The Tour of Flanders every year for almost a decade, never rode our bikes, just went for the beer and to watch the race, (I was a hopeless Hincapie fan), catch up with friends etc. We’d always said we’d take these bikes and ride a few cobbles (not in anger~) and drink a few beers to see how they actually rode. Unfortunately this was never to be, Alan was diagnosed with cancer for a second time around 2012 and tragically died on November 3rd 2014 aged 54. 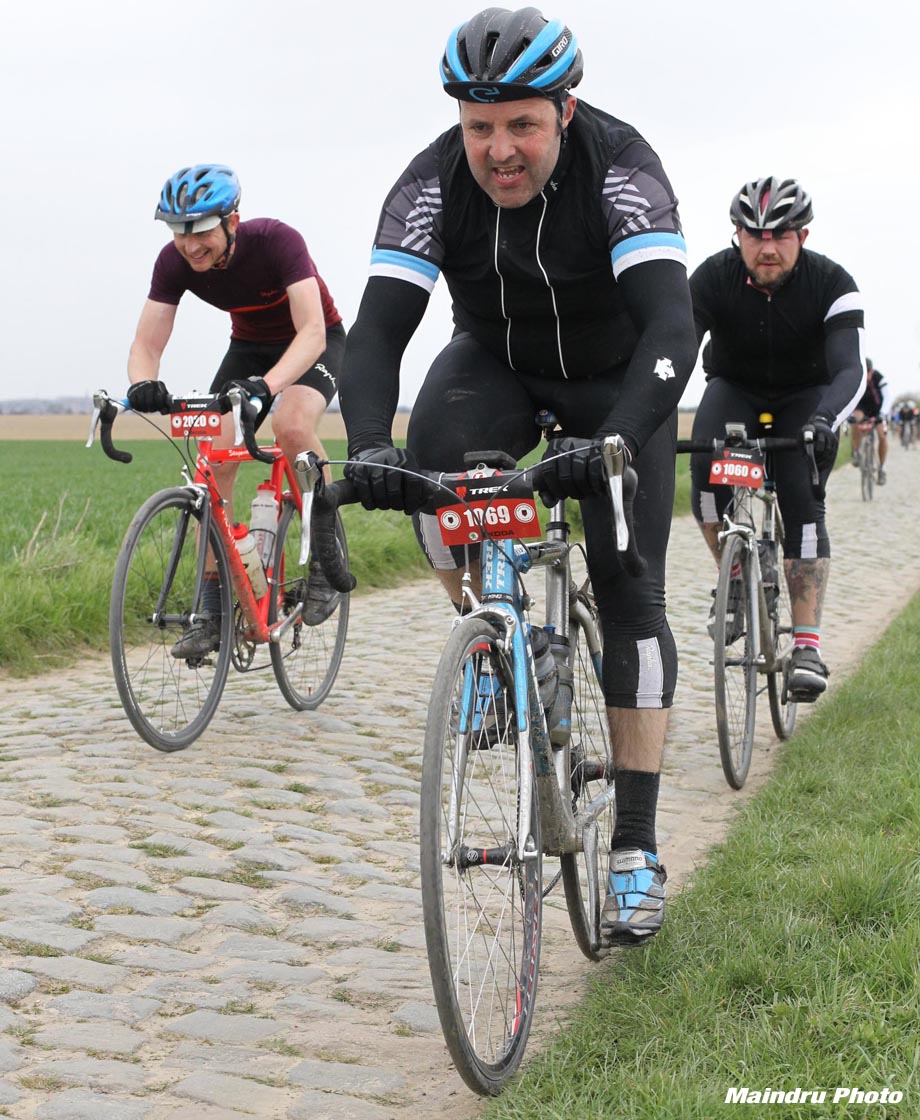 Martin on the cobbles of Paris-Roubaix

And Paris-Roubaix?
I decided to ride the 2015 Paris Roubaix Challenge in memory of Alan, raising money for a local hospice and giving the bike its last ride on the cobbles, Tony Cruz had ridden the bike at Roubaix in 2007 but DNF’d, that wasn’t an option for me. Along with three friends on Saturday 11th April we started the 163kms from Busigny to the Roubaix Velodrome. We had every type of weather thrown at us on the day, started with rain, then dried up but with gusty winds then finally rained again for the last 20km or so, I finished with a ride time of 6hrs 47mins. The bike is now retired, hanging in my garage still covered in Roubaix dirt with the medal hanging from the handlebars. 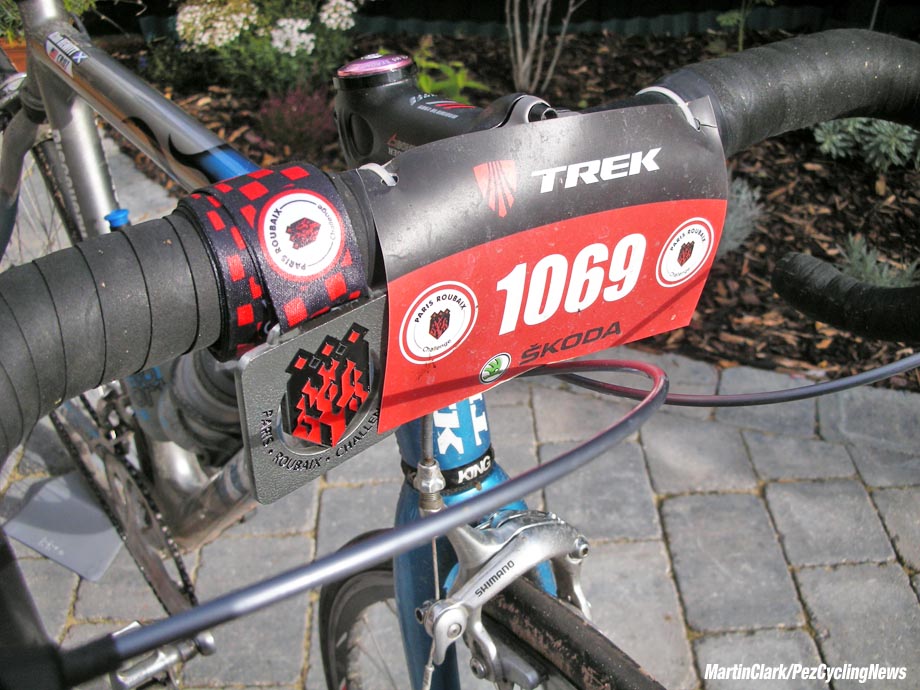 The medal to prove it

Is there another ride planned?
It’s looking like Flanders, again in memory of Alan but on a different bike. Then I’d really like to take my wife Sarah back to Mont Ventoux and ride that with her, we were there in 2000 when Armstrong and Pantani duelled it out. Sarah’s recently got into road cycling herself after being diagnosed with Type 2 diabetes. 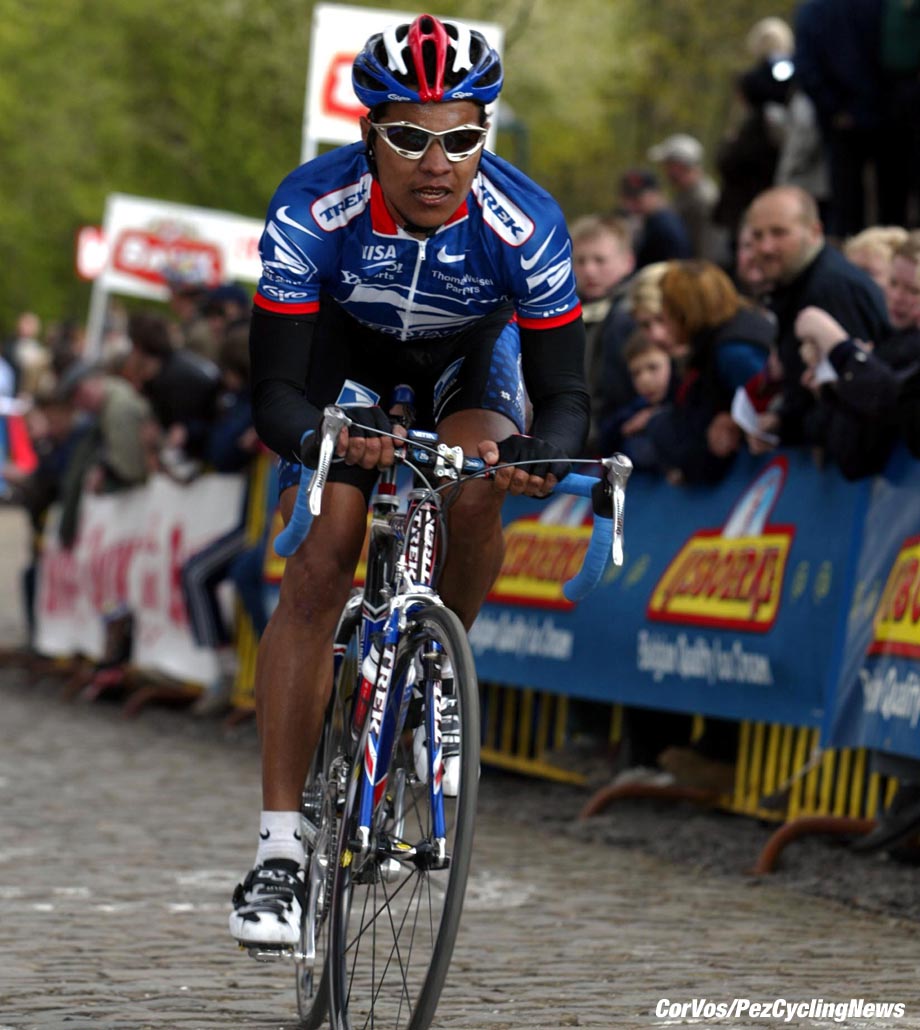 How does it ride compared to a conventional carbon bike?
It actually feels like you have a puncture! It is stiff and compliant in the front end but I did find myself checking if I had a flat a few times on the first ride out, there isn’t a huge amount of ‘travel’ in the rear but it is noticeable on tarmac, it seemed to take edge off the cobbles that’s for sure. 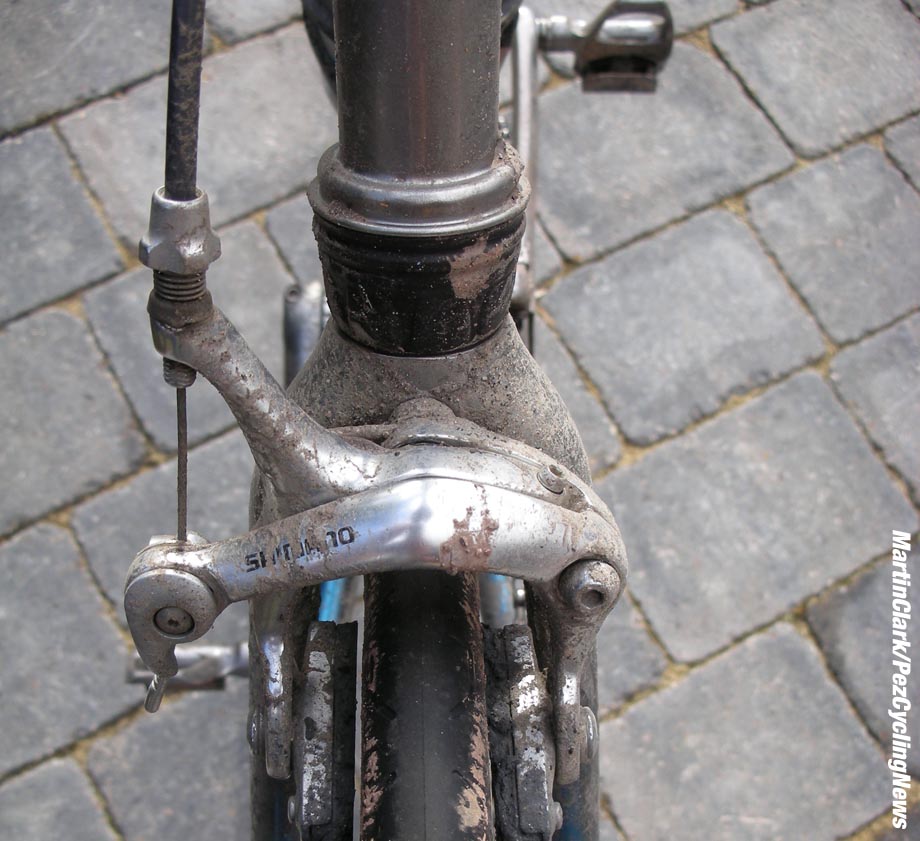 Tell us more about riding the cobbles of Roubaix
Nothing prepares you for them, after Alan passed away I was in a dark place so I needed a focus, I dug out my rollers and started training, at first half hour sessions, then one hour until I was riding one hour non stop spinning 25 mph average for the hour, I found that invaluable when I got to Roubaix, you’ve got to keep the bike rolling or you’re gonna be in trouble, avoiding other riders is the other issue, we’d hit each sector on the crown and end up in the gutter more often than not as the cobbles were so slippery first thing in the morning. The Arenberg is every bit the bitch it appears to be on television, took me 10 minutes to get out of that one sector! I’ll never forget the four of us riding onto the first sector, as we hit it we just laughed then I said “this is gonna be a long day out lads” it certainly was that. 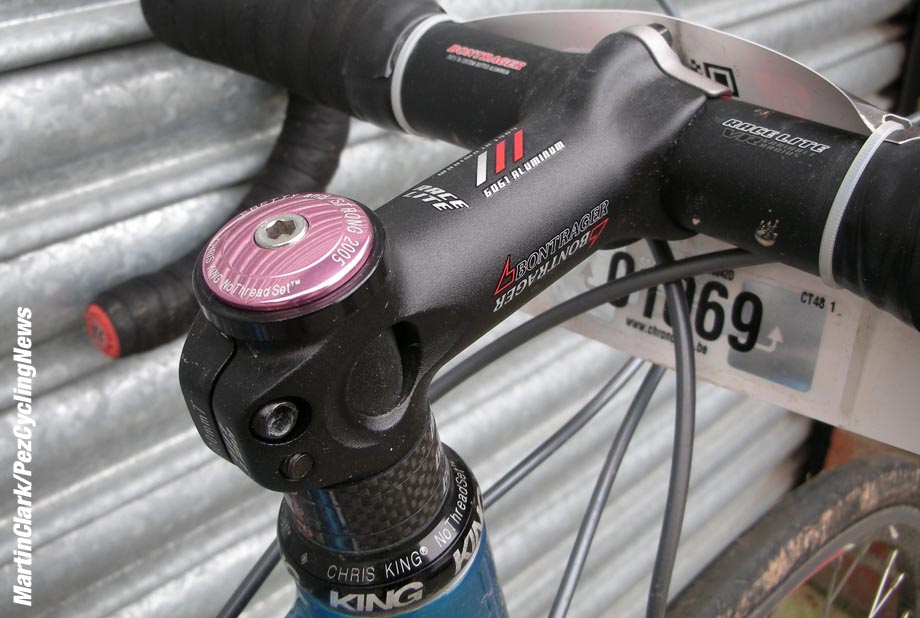 What modifications/additions have you done?
The bike is basically the same spec as what the Team rode, it’s got a Chris King headset, in 2007 they rode a PRO unit. I opted for Continental GP GT 25mm tyres unlike the team who used Hutchinson back then. They also used the Shimano Ultegra seat pin as it had the forged aluminium top unlike the bonded Dura Ace ones that would often become un-bonded over the rough cobbles. I double wrapped the top of the bars and put gel under too. I added Alan’s name to the top tube above Tony’s. The only other thing was the pink Chris King ‘Pretty & Strong’ 2005 top cap that Alan gave me whilst battling his first round with cancer in 2005, when things got hard it was a reminder of why and who I was riding for. 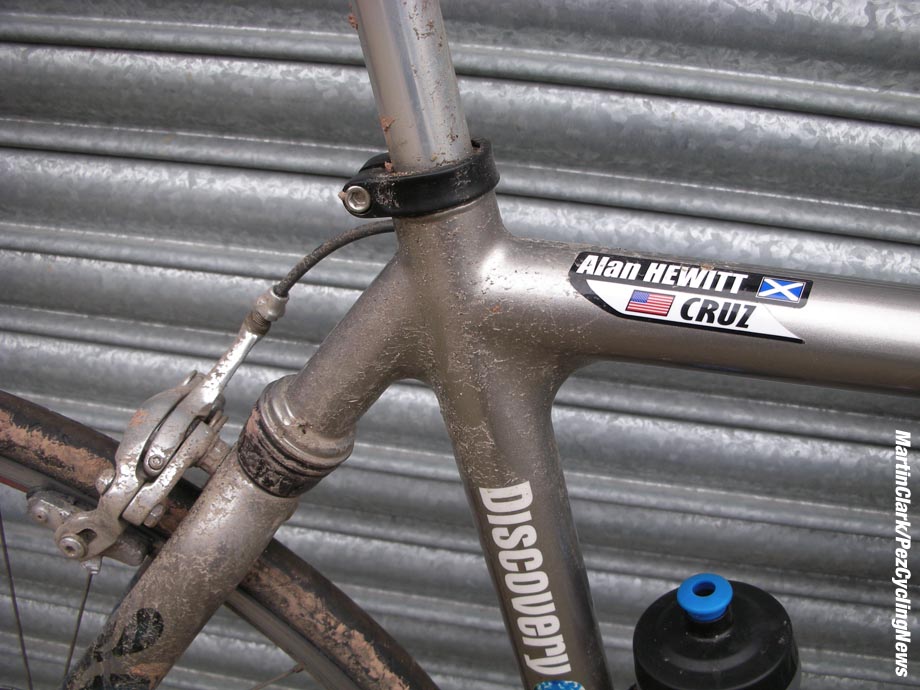 Alan was there for the ride

What do you love about this bike?
When I bought the bike it was about owning a rare ex-team bike, I’d never planned on riding it. What I now love about it is what I did on it, the memories of that day, bouncing over the cobbles, not being able to unclench your fingers from the bars as you exit a cobbled sector, it’s a great looking bike, even though some might say it needs a clean! 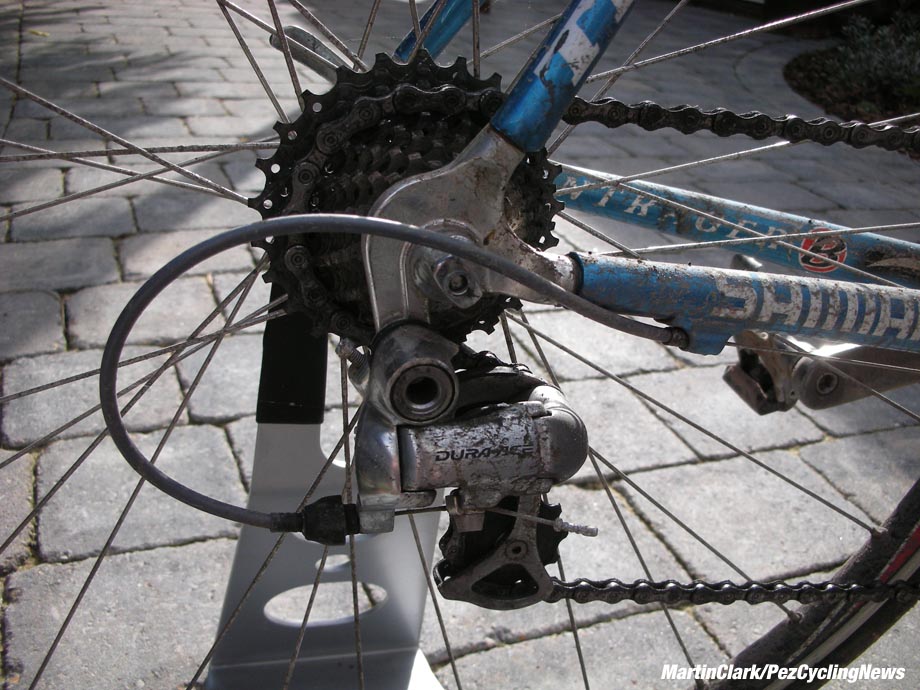 Would you change anything about the bike?
I’d line the tyre label up with the valve on the front wheel, I got a flat on a sector, caught a cobble whilst turning, I was in a rush to get rolling again and didn’t pay attention to my usual detail. The pedals could’ve done with being the Dura Ace 7801 versions too, that would make it period correct, other than that, nothing else. 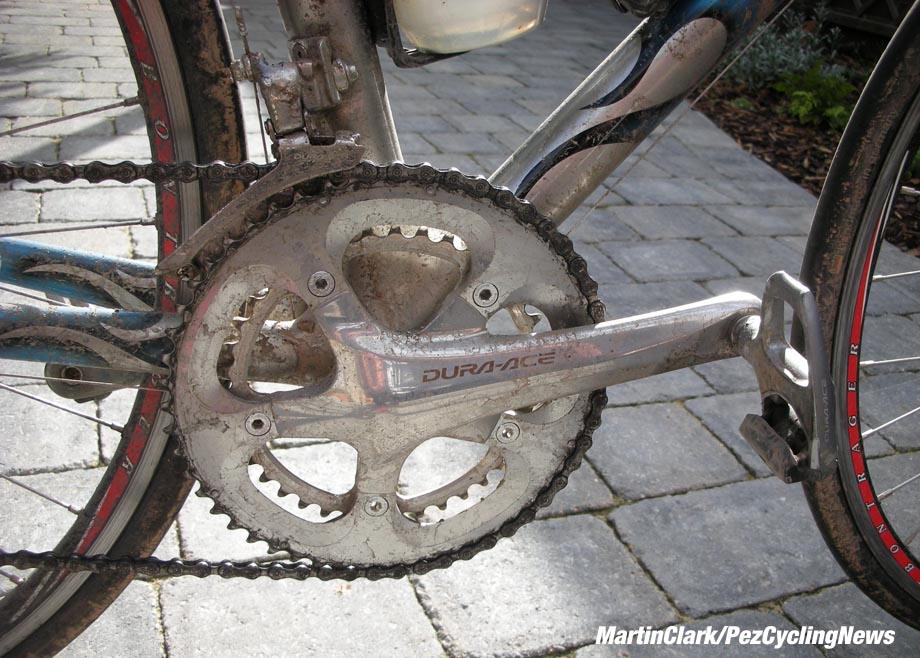 What is your next bike build?
We’ve talked about an Alan Hewitt tribute bike, who knows? I fancy doing a Motorola Eddy Merckx to match my 7-Eleven one! 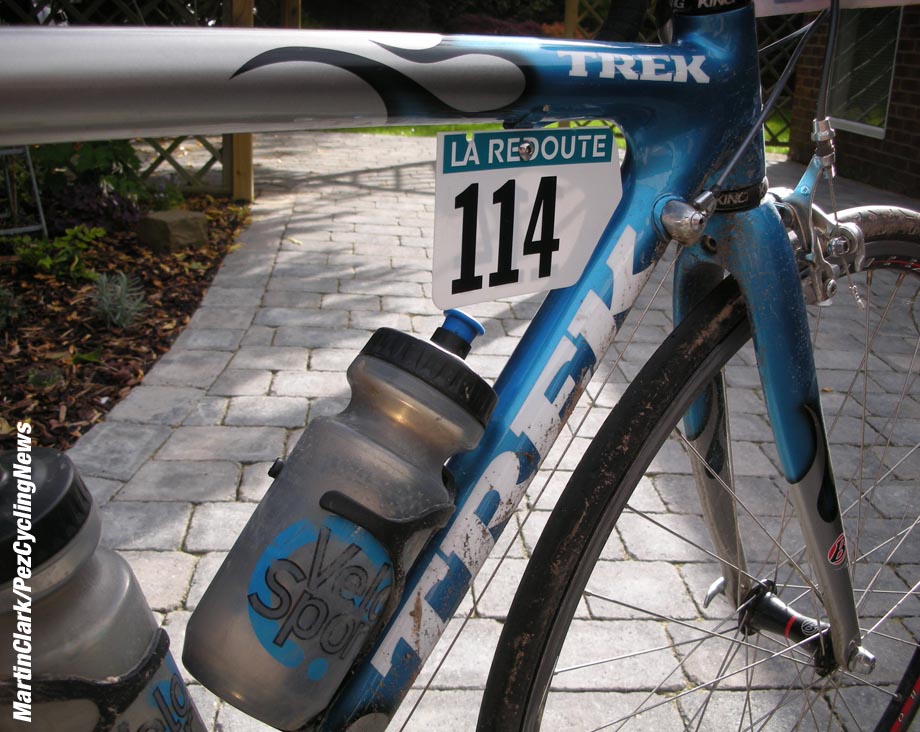 A proper race bike with number

Any last words?
Thanks to Ricky Feather, Andrew Woolley and Adam Wright for agreeing to ride with me and supporting me, couldn’t have done it without them. Also to a new friend we made along the way, Dave Palmer, a fire fighter from Oregon who was also on his first trip to Roubaix. And a big thanks to PEZ for allowing me to share my bike and my memories of Roubaix. 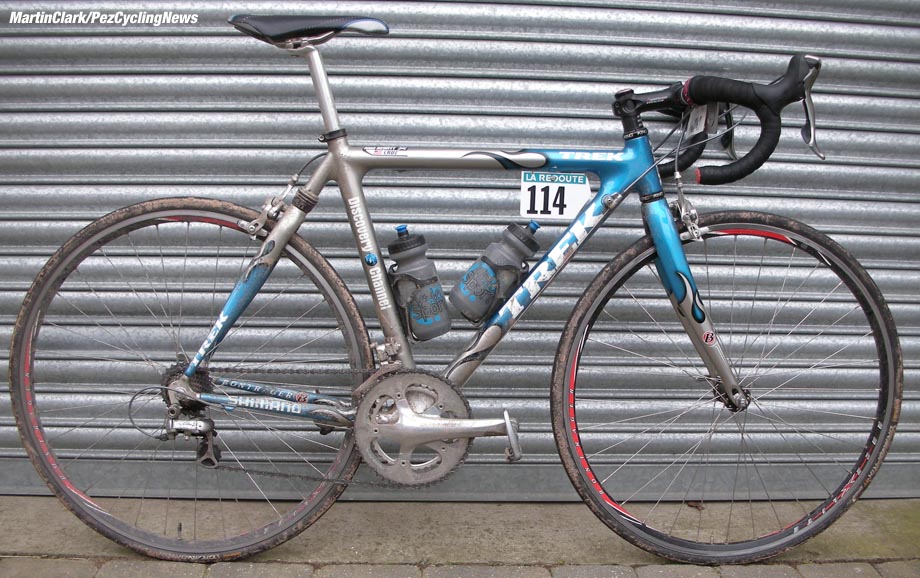 Thanks to Martin for sharing his bike and the reason behind the rebuild and his Roubaix ride. I also knew Alan Hewitt and he was the most genuine person you could ever meet. He loved a good time and couldn’t help but spread his good humour where ever he went. Alan was a big guy in many ways; size, character and hearted. He is missed by many in the cycling World and outside of it. The best friend you could ever have. Alastair. 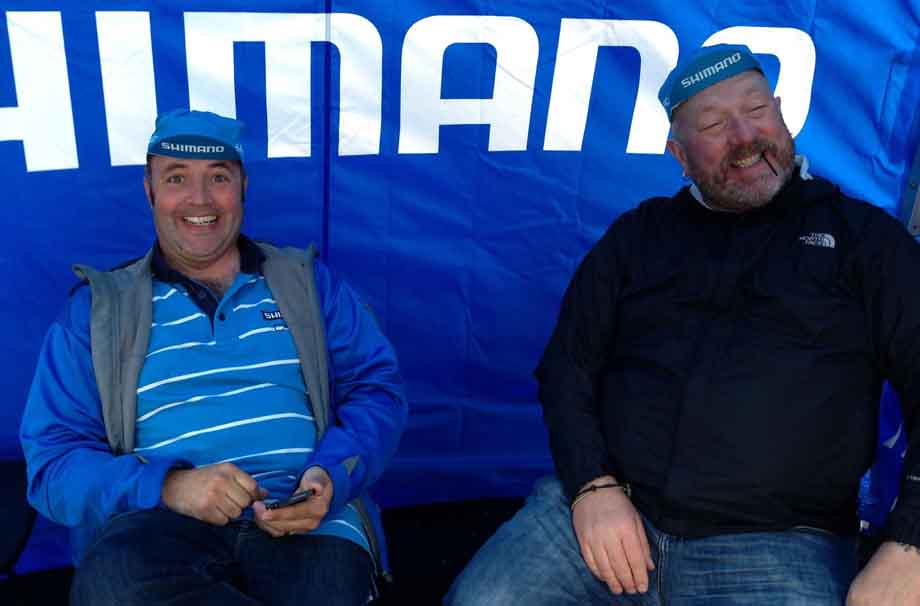 Got a bike that you walk into the room just to stare at? Well, how about sharing it with fellow PEZ fans and getting it featured in Readers’ Rigs so we can all stare at it! Send us a Readers’ Rigs submission direct to [email protected] and your bike could be featured in all its glory here on the pages of PEZ.
Like PEZ? Why not subscribe to our weekly newsletter to receive updates and reminders on what's cool in road cycling?