Readers Rig: Jeffrey Ogren has sent us this bike for Reader’s Rigs after we featured his Greg Lemond a couple of years back. This isn’t Jeffrey’s bike, it belonged to Roger Nelson, a customer at his bike shop, who gave the bike to the shop and it was passed on to a young racer. Rodger Nelson has raced since 1948, and now lives in Florida, and still very active in the riding community. Here is the story of the bike by Jeffrey Ogren. 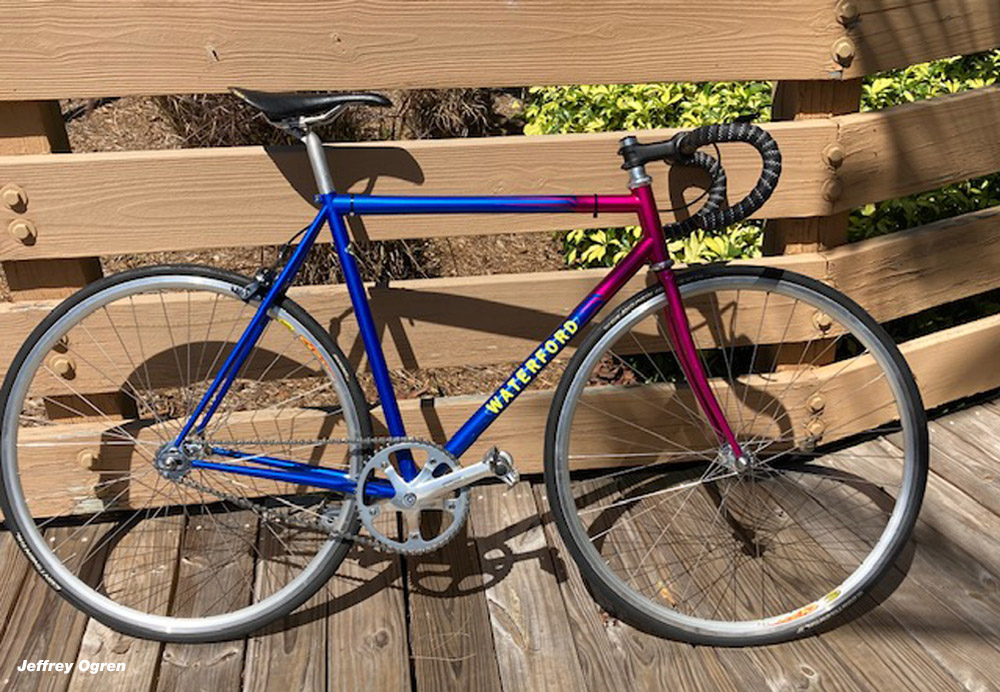 Having worked in bike shops since the mid 80’s, I’ve had the opportunity to ride some really nice bikes, and when this one passed by, I knew it was something special. 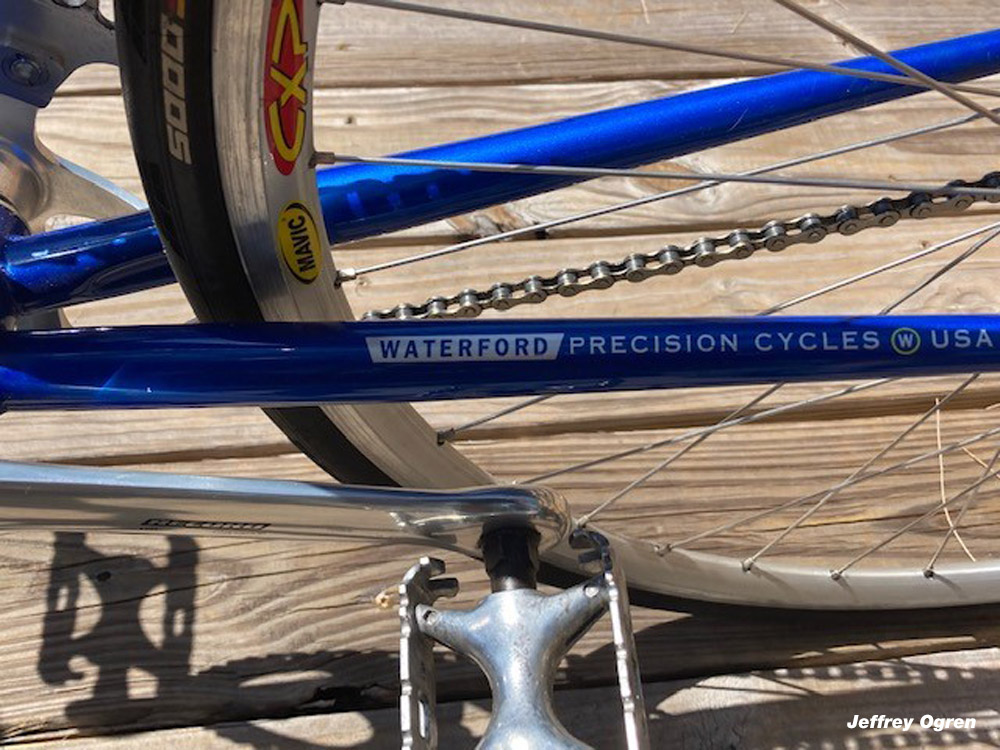 This is a beautiful Waterford bike. The hubs and crank-set are Campagnolo track parts. The Nitto brand bars were the deepest drop ever seen on a bike. Rodger told me they had five of these bikes, this being the fifth. He said it’s never been ridden; this one has no miles on it, until he rolled it into our shop. It’s been waiting years for someone to ride it. 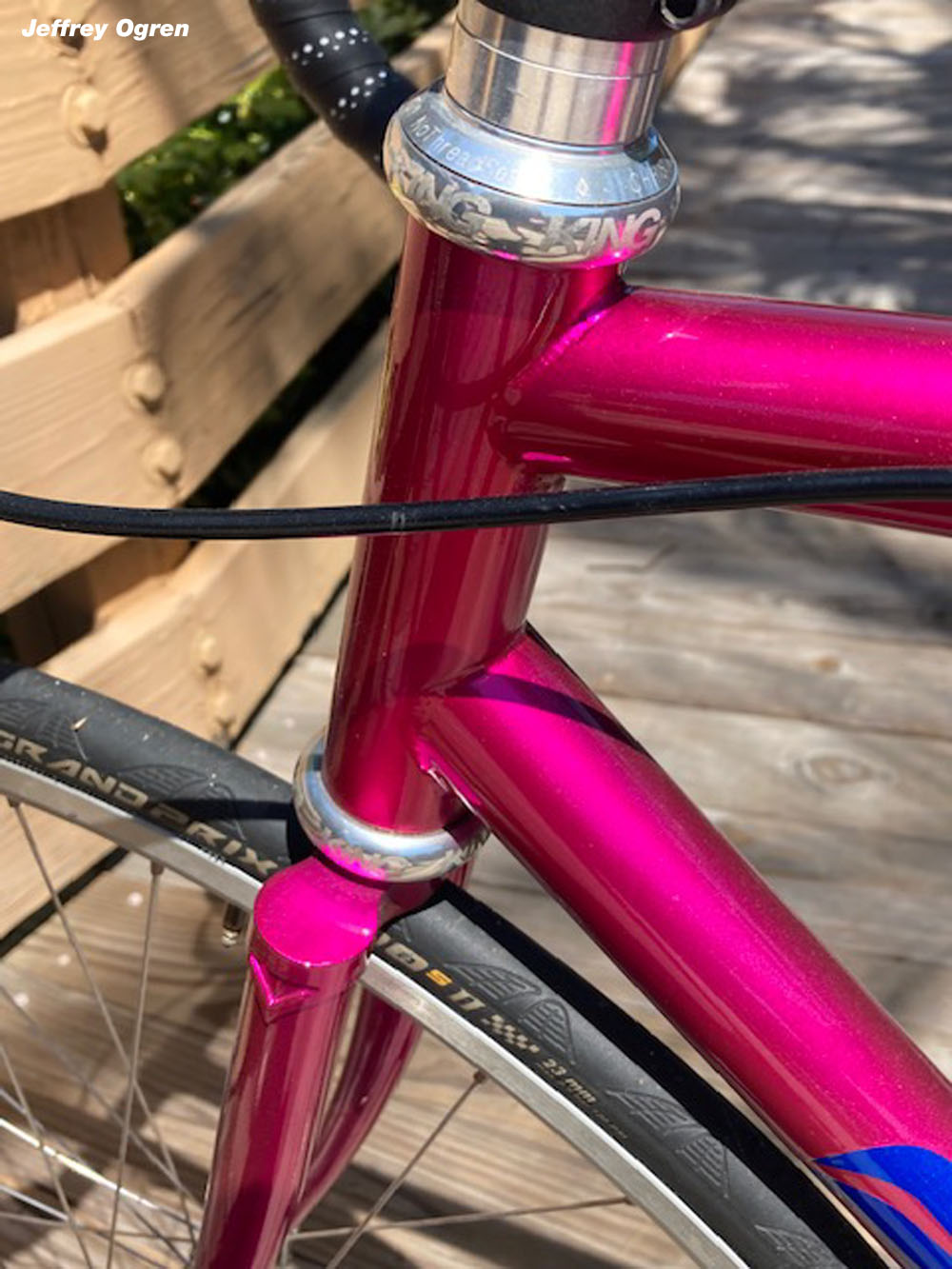 Rodger has been our customer for a few years, bringing his Trek in for service, and regaling us with stories of way back, when bikes were steel, shorts were wool, and men were iron. He brought this track bike in one day and presented it to us as a gift, to be ridden, given a good home, and not to be sold. Our manager is a bit old and stiff to reach those drops, so our young cat 1-2 racer, Tyler, accepted and vowed to ride a fixie for the first time. 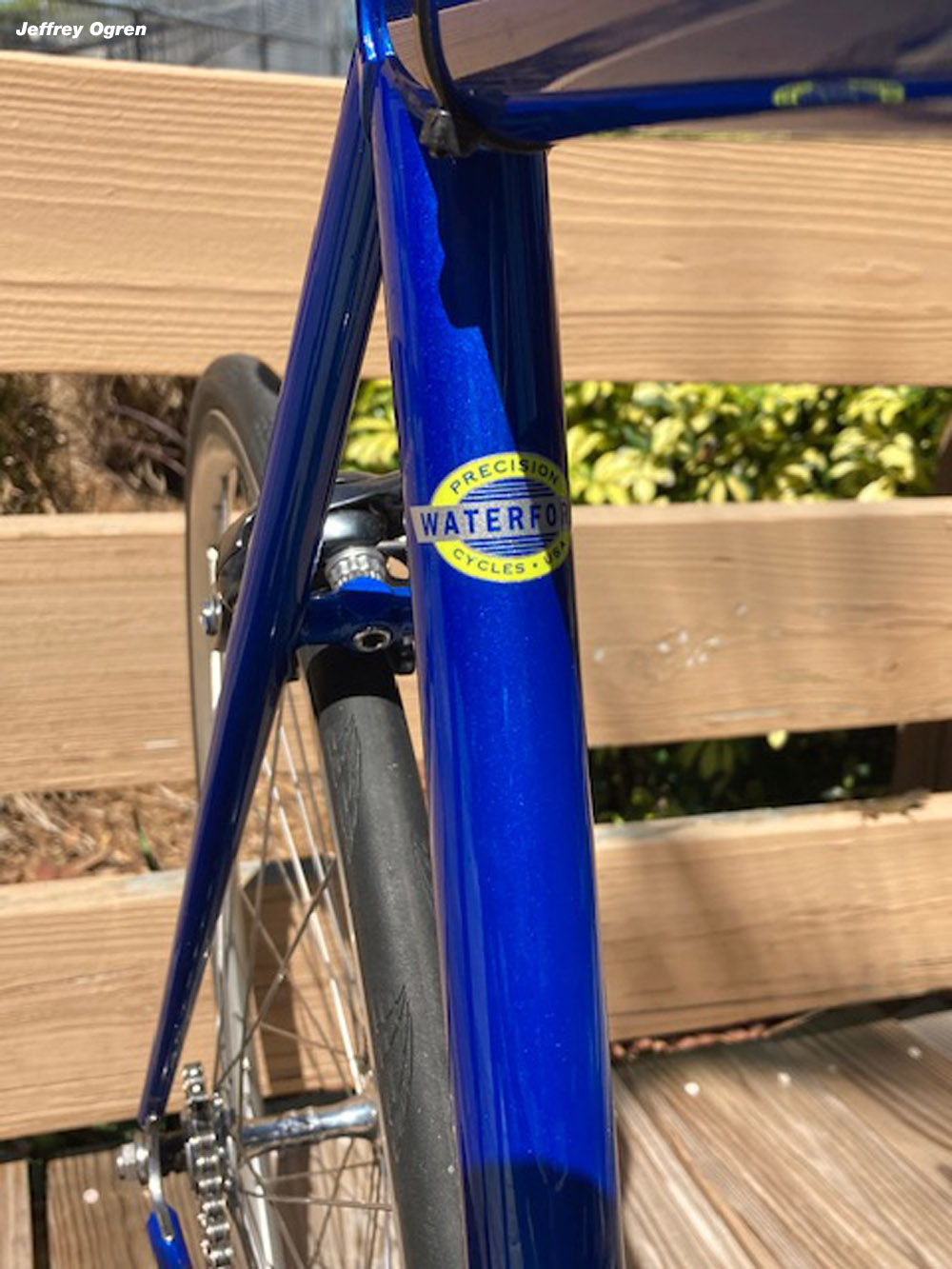 Rodger has been racing since 1948, and holds records at the Wisconsin Senior Olympics, in the 5km and 10km time trial, in the 85 to 94 year category. And the 20 km road race. He’s pretty much got that age group covered. Never underestimate an old man on a bike. 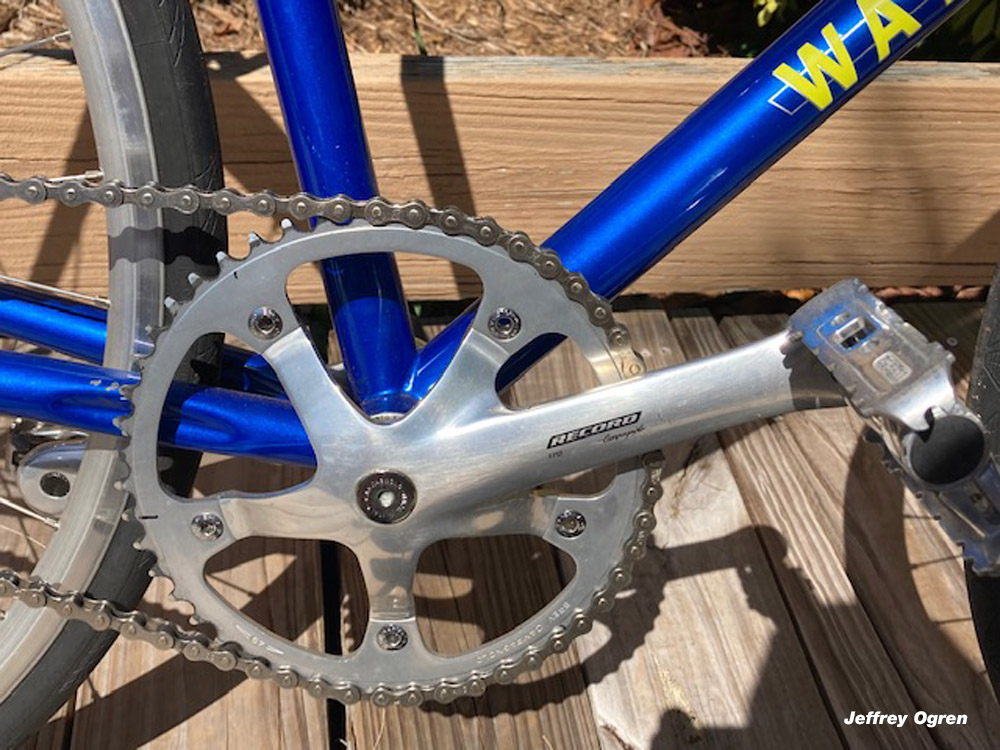 Rodger Nelson and Don Mainland built Schwinn Paramount frames in the 1970’s, in Wisconsin, when Schwinn needed more frames than the Chicago Paramount shop could produce. This Waterford track bike is the result of two guys with uncounted miles under their wheels, with experience in both road and track racing, making a bike, exactly to their liking and needs. The welds are as nice as can be, the paint is tasteful and perfect, and the clearance of the fork over the tire is tight, to put it mildly. 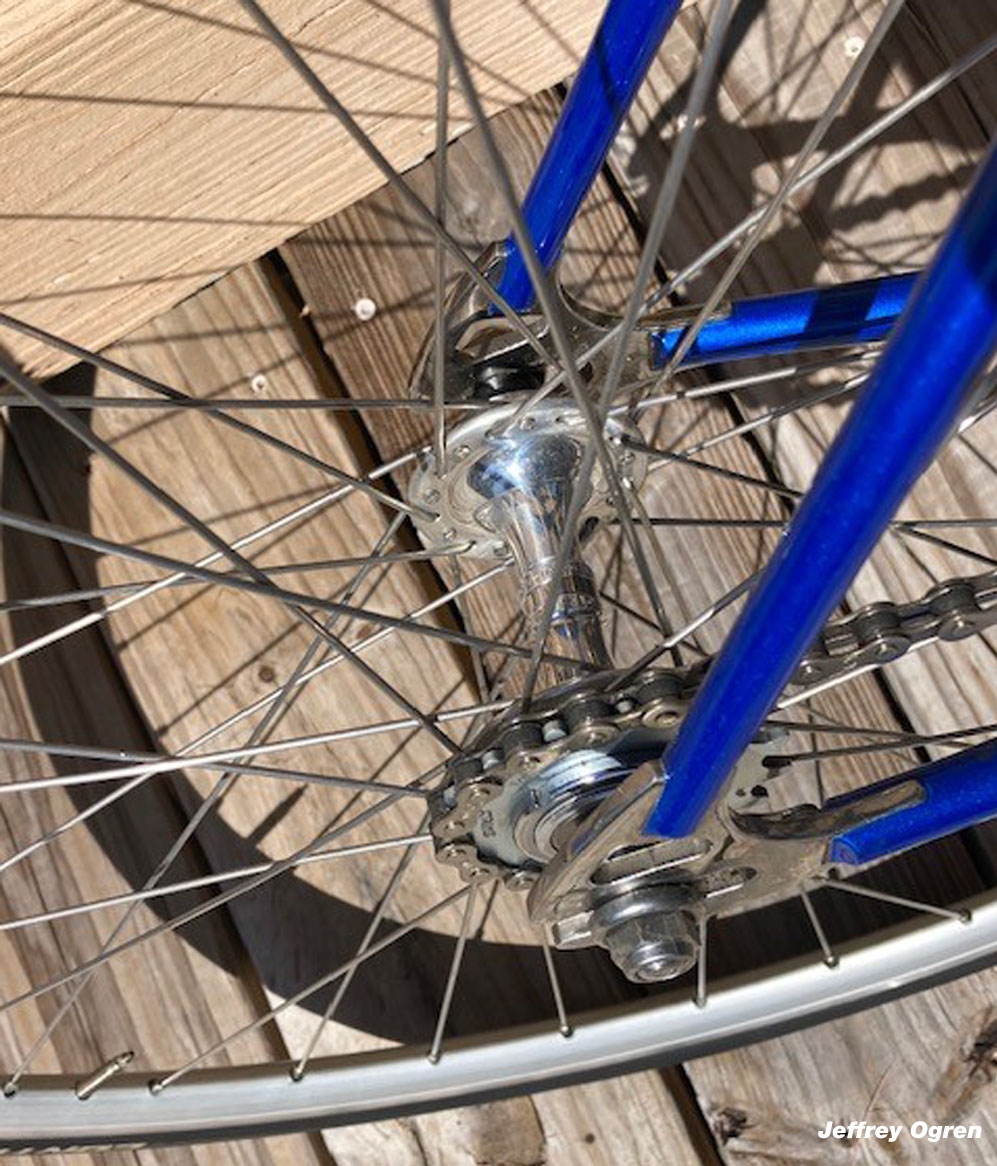 It’s a bit small for me, but I had to ride it. We have a bike trail right outside the shop, so off I went. It usually takes about two-hundred yards to decide, and this rig was perfect.
The ride is smooth as can be, but it does not flex. It steers very nimble but not like a road bike, much stiffer on the front triangle, and when get-up-and-go is applied, it goes. There is nothing lost between the Campy cranks and the ground; no flex front or back, stiff wheels, and no choice but aero with the deep drops. It’s one of the stiffest bikes I’ve ridden when it comes time to sprint.

Tyler has risen through the categories remarkably quickly, and along with the dedication to before-sunrise-rides, long miles, and riding in packs, comes more than a few crashes. He has managed to stay upright this year, but then this Waterford was added to his stable. He rode it, tentatively, at first, got the hang of it, and loved this bike. Little did he know… There is one lesson to be learned about riding a fixie that can be talked about but there is only one way to truly understand and know the lesson. What happens when you forget you are on a fixed gear with no coasting, and you stop peddling? I told him, having had a fixie in the house for ever, to never stop pedaling, and never forget you are on a fixie. Pay attention. 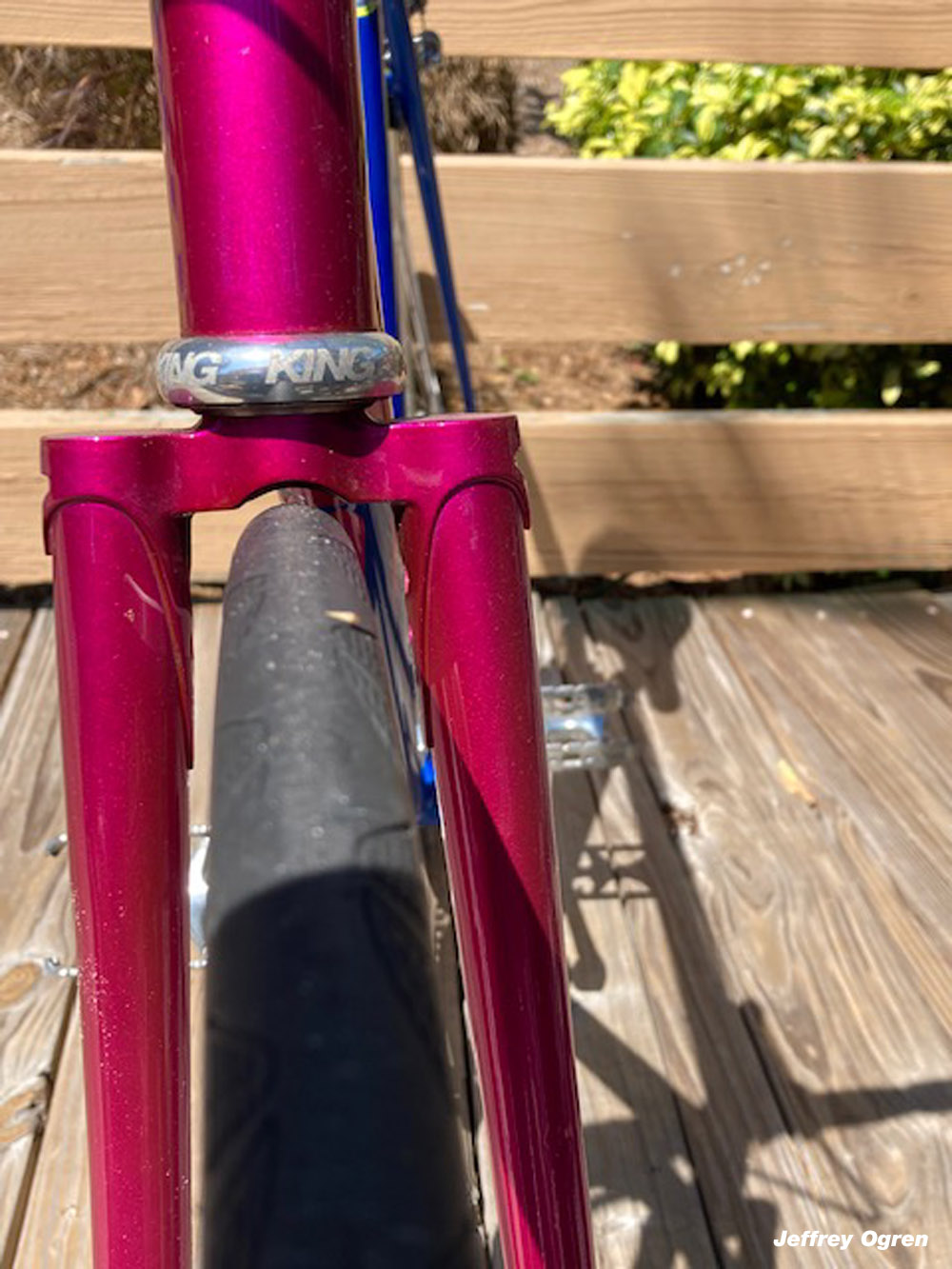 One day he hopped on the Waterford and zipped out the back ramp onto the bike path to pick up his car from the garage. He reached for a pocket to check his phone, and forgot to keep pedaling. Over the bars he went, 30 feet into the ride. So the bike has finally has had its first crash. The cloth tape is scuffed on the left drop, but no other damage to the bike. Tyler is a bit beat up, but knows quite well how to treat road rash. 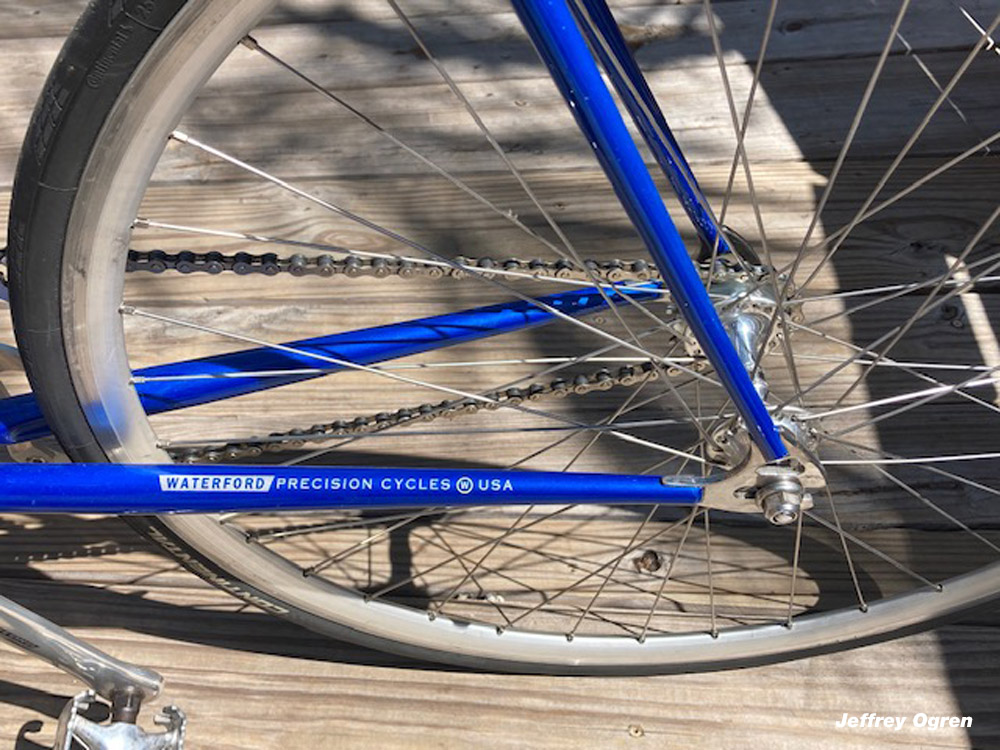 Tyler changed the bars and stem; even as a cat 1-2 racer, used to a slammed position, he couldn’t feel safe with being so low. He has vowed to ride track, as in velodrome, so the Waterford will roll for a while yet.

Rodger came by our shop last week. He is doing the indoor big-screen cycling thing, it gets a bit cold in the mornings, and no one in Florida owns cold weather gear. He is ninety-five years old, and has a lot of miles behind, and still a lot ahead.
This is an awesome bike. 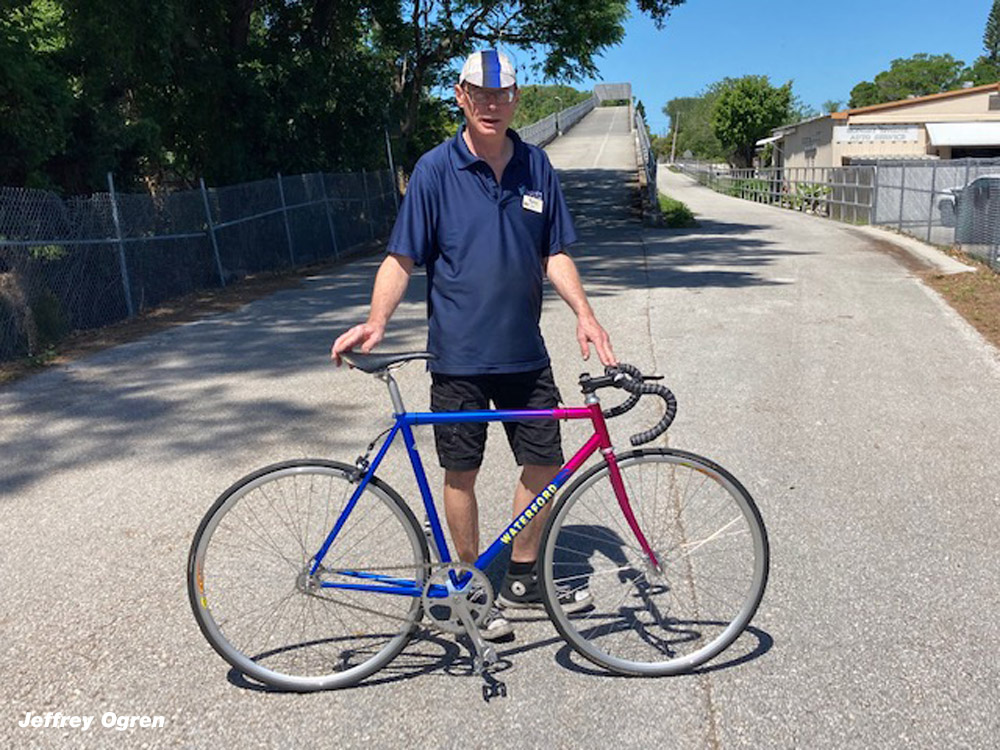 You can read a bit more about Rodger Nelson here at: eu.jsonline.com

Thanks to Jeff for sharing with us. Got a bike that you’re proud of? Well, how about sharing it with fellow PEZ fans and getting it featured in Readers’ Rigs so we can all stare at it! Send us a Readers’ Rigs submission direct to [email protected] and your bike could be featured in all its glory here on the pages of PEZ.

BREAKDOWN: Should Remco Evenepoel be a One-Day or Stage Racing Specialist?

Listen Live & Watch the Tour of the Gila