And now for something completely different – an MTB on PEZ! Yes, but it is retro. When PEZ fan Dick – a keen roadie – sent in pics of his Pro Cruiser MTB our roadie brains were interested in this bike. It’s one of only 600 that were made between 1978 and 1984 and makes claim to being the first production MTB. 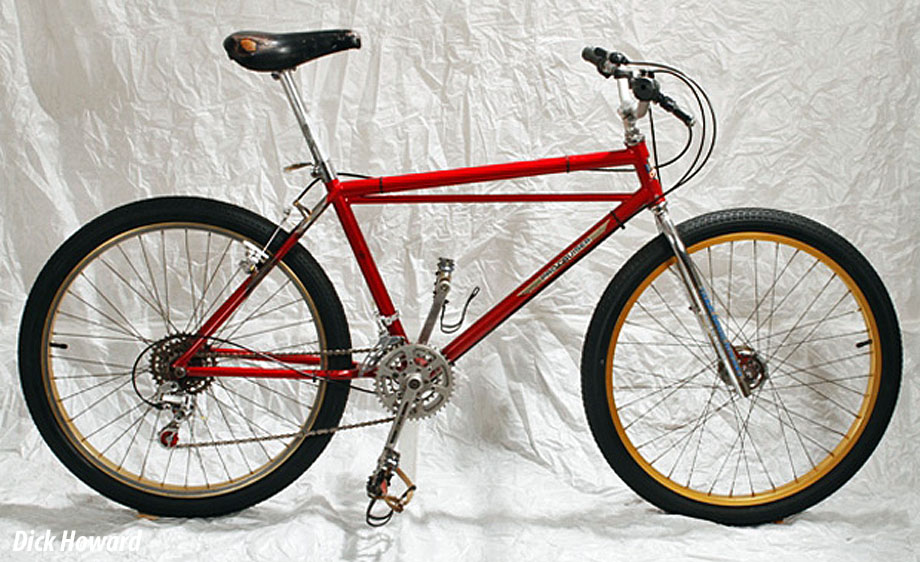 Dick’s Pro Cruiser was on display at the pinnacle of road cycling events in Richmond – the 2015 World Road Cycling Championships as part of a special display. Lets take a look back in time now at Dick’s special machine.

This is a truly unique machine Dick, could you run me through how it became yours?
In 1979 I read a story in Bicycling magazine about clunkers in NorCal. I wanted one so I found an old beach bike and had my local bike shop build it up for off road use. It was a “hog” so by 1981 I had a Trailmaster catalog from Cove Bicycle Shop in Mill Valley Ca and I ordered this Pro Cruiser frameset from them and built it up with a combo of existing and new parts. 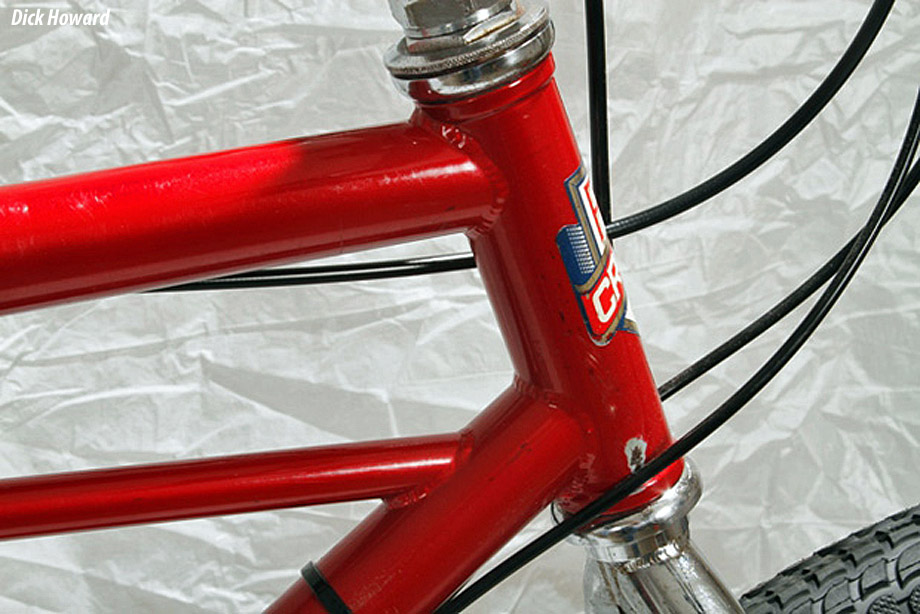 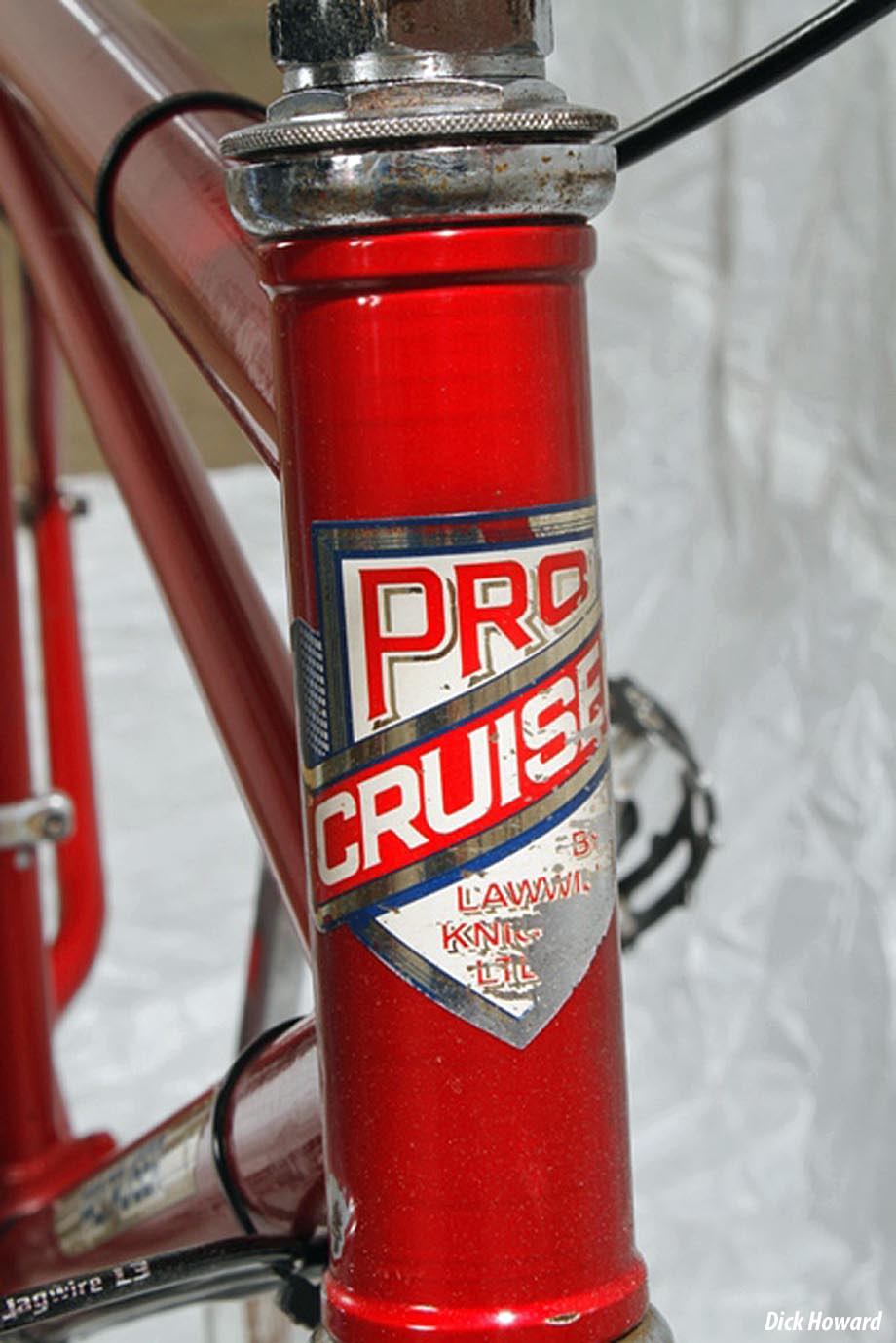 How is it that you still own it after all these years – I’ve had some great bikes that I’ve let go and would love to own now. Did you ever come close to selling her or giving it away?
No way! I rode it hard in the Blue Ridge Mountains of southwest Virginia. It was great for bombing but did not climb very well. I could make a good case for the Pro Cruiser being, in retrospect, the first down hill bike. It was the first purpose built mountain bike all of my snobby roadie cycling friends had ever seen, probably the first mountain bike in VA, certainly the first in Richmond VA. Mert Lawwill says that very few were sold to the East Coast. I knew from the beginning that it was historic and needed to be ridden then preserved. In 1986 I got a Mountain Klein so I hung the Pro Cruiser under my house. It was high and dry until I decided to restore it in 2013. The Candy Apple paint is still intact, beautiful though a little nicked.

Production on the Pro Cruiser started in 1978 and stopped in 1982. About 600 of these framesets were sold either as complete bikes or framesets only. 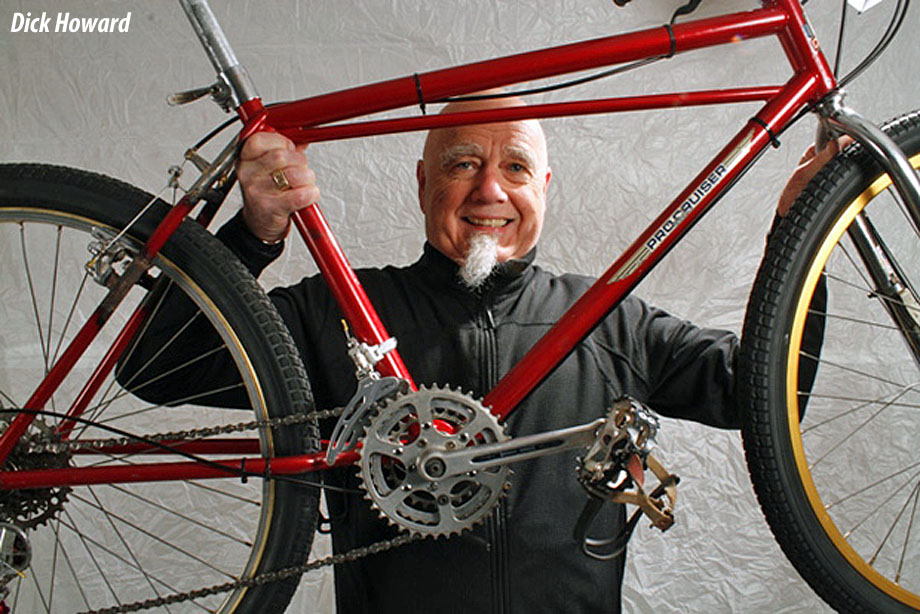 Dick with his pride and joy

What modifications/additions have you done?
My local bike shop was a good one but they could not get the original Atom drum rear brake to work decently, especially when wet. So in about 1983 or so I converted the rear brake via a nicely constructed brake hanger and Shimano cantis. The rear hub was switched to a phil. It looks weird but still turns freely. Everything else except tires, cables and housing are from 1979-1986. The Pro Cruisers were originally 5 speeds but I needed more gearing so I bent the mount on a Sun Tour Mountech derr. to fit my seat tube. I think that jury rigged mounting arrangement was standard operating procedure to create mountain bike gearing back in the day. 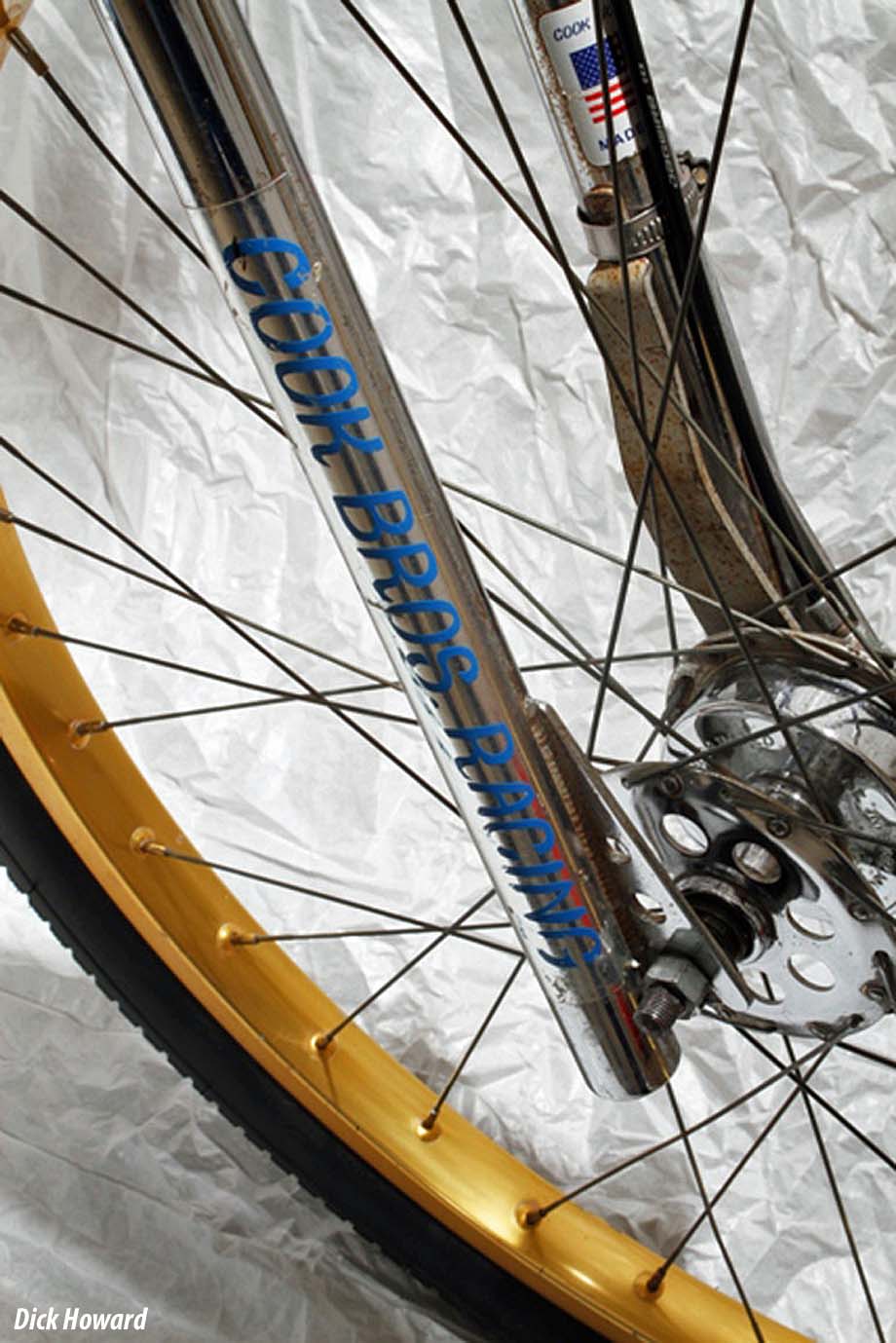 Now that you have restored it, what are the plans – a show bike, weekend cruiser, living room art – or maybe all 3?
I showed it in a bicycle history exhibition in Richmond Va in conjunction with the 2015 World Cycling Championships. I’d love to bomb it one last time down our local Poor Mountain’s fire road but that could get ugly for me and the bike. I’ll probably loan it out to a home town custom builder as shop art and maybe do a little city cruising. People are starting to appreciate mountain bike history and I want this rare old bike to be around long after I am gone.

Future upgrades or changes?
None. It is pretty much “frozen” in 1986 and I want to keep it that way. 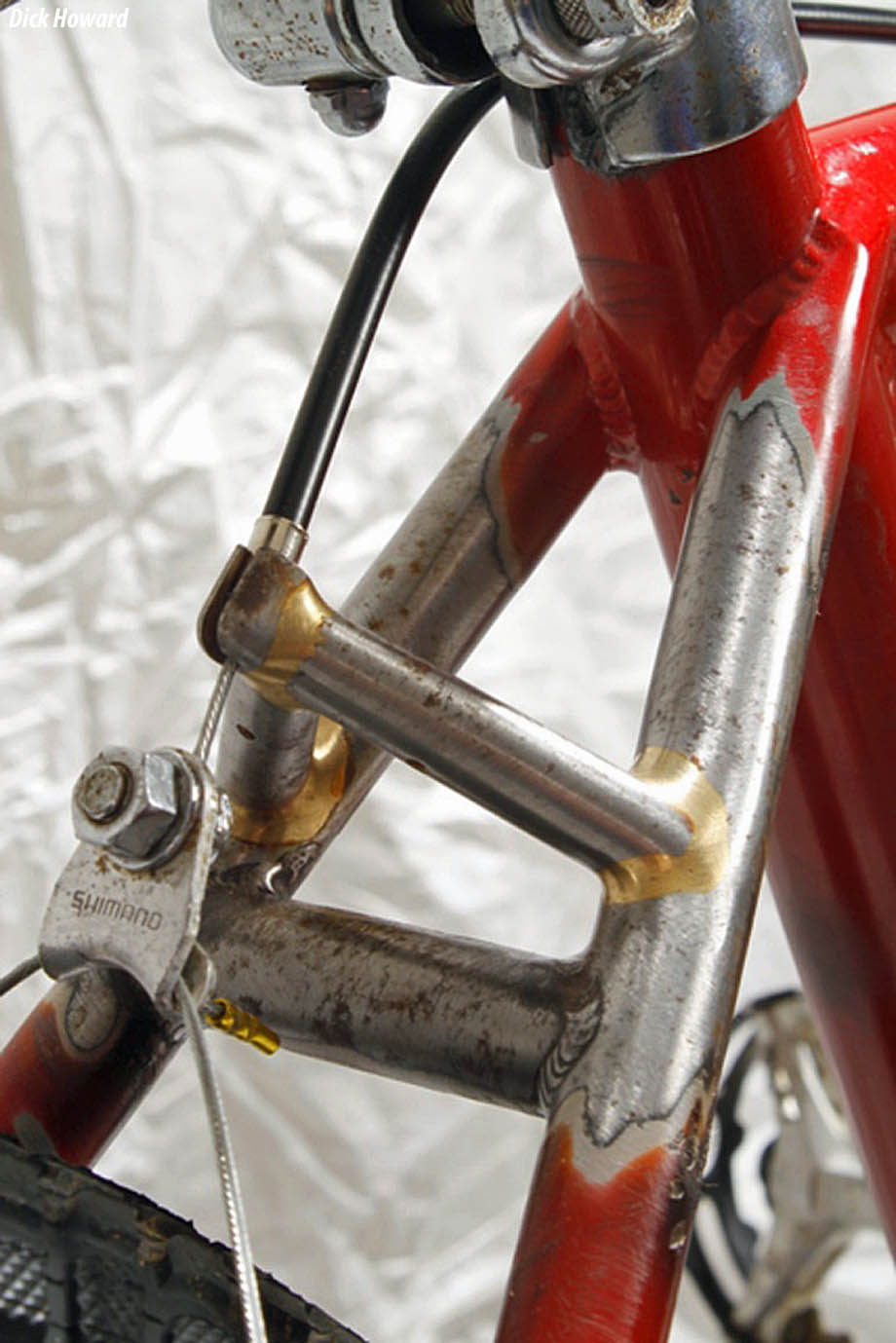 Last words?
I have been very lucky in that as a kid I loved history so when I got into bikes it was natural that I would develop an attachment to the historical significance of my own bikes. In addition to the Pro Cruiser I have a late 30’s or so Drysdale Red Devil that I found in 1972, a built to spec W.B. Hurlow and a built to spec S.W. Cotton and a rare Mountain Klein. All are one owner except the Red Devil which I have owned twice. 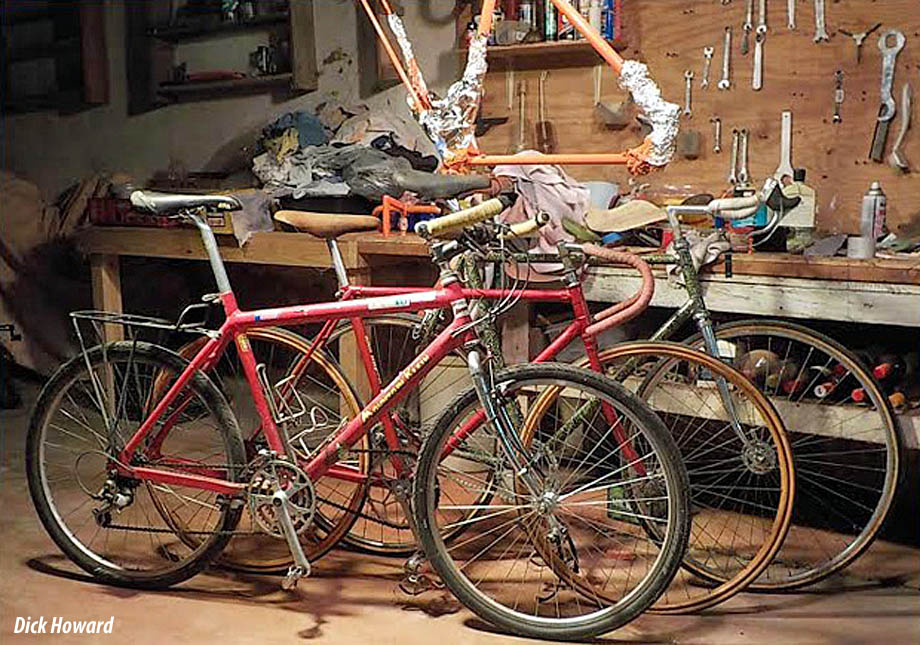 Some more of Dick’s classic machines…

Through owning and restoring the Lawwill-Knight Pro Cruiser I have gotten to know Don Koski, who designed the frame and fork, Mert Lawwill and Terry Knight. They were all there at the big bang birth of mountain biking in northern California. I feel like I am the keeper of the flame for a significant part of mountain bike history. Respect the history.

Got a cool bike yourself and want to see it on PEZ? Send a quick intro and some pics to [email protected] and you and your bike could be the next to be featured in Readers’ Rigs.

EUROTRASH: Bernal Out Of Hospital & All the Other News