Dr. Stephen Cheung is our resident sports scientist and a man that we’re all jealous of with his worldwide ‘work’ trips as he continues his scientific journey through life. Combining travel with transporting a bicycle made his choice of rig easy – a steel Ritchey Break-Away that’s travelled with Steve on some amazing experiences. Here’s their tale…

And what made you choose this bike?
I’ve joked for many years that my primary goal in science is to have it pay my travel bills and that has fortunately come very true for me. But the kicker with so much travel is that it meant either paying exorbitant airline bike fees, begging/borrowing a bike, not riding, or (shudders) running to keep fit. So I decided to invest in a bike that I can take with me most anywhere I go.

I’ve harboured a secret yearning to be Pineapple Bob in those early 90s Ritchey ads featuring super-light road and mountain bikes. I also loved the ingenious coupler system that breaks the bike down into two halves yet doesn’t look big and clunky. Indeed, almost nobody clues in that it’s a travel bike unless I actually tell and show them. The other bonus is the really clean graphics that’s elegant and classy. 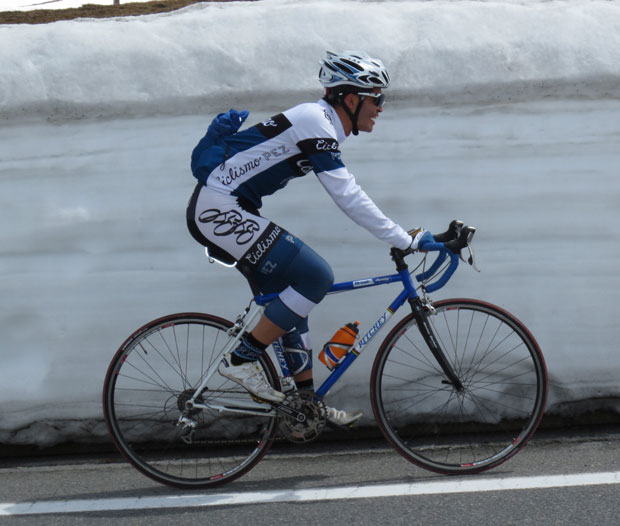 There’s a lot of time to think science when you’re climbing the Stelvio, here during the Pez 10th party.

How long does it take to pack or build, and what are some tricks?
If I focus, I can completely build or pack the bike in 20 minutes. I actually find it simpler to pack than a normal bike in a hard case, as the quick connectors for the rear brake and both derailleur cables allows me to completely separate the front and rear triangles, along with the handlebar/stem unit once I take the front brake completely off the forks. I score my handlebar and seatpost so that the handlebar rotation and the seat height is perfect without having to bring a tape measure.

For tools, I just have a multi-tool and pack both a mini-pump and my trusty 25-year old Zefal HP frame pump to give me an easier time with inflation. When I’m feeling paranoid I’ll also pack my torque wrench set. I’ve also been able to stuff 2 sets of riding kit, shoes, a saddle bag and bottles and other spare parts while keeping within the 20 kg limit.

Another bonus with the BreakAway is that the case is small enough to easily fit into the back seat of cars or taxis, and is also easier to stow or store long-term compared to a hard case. 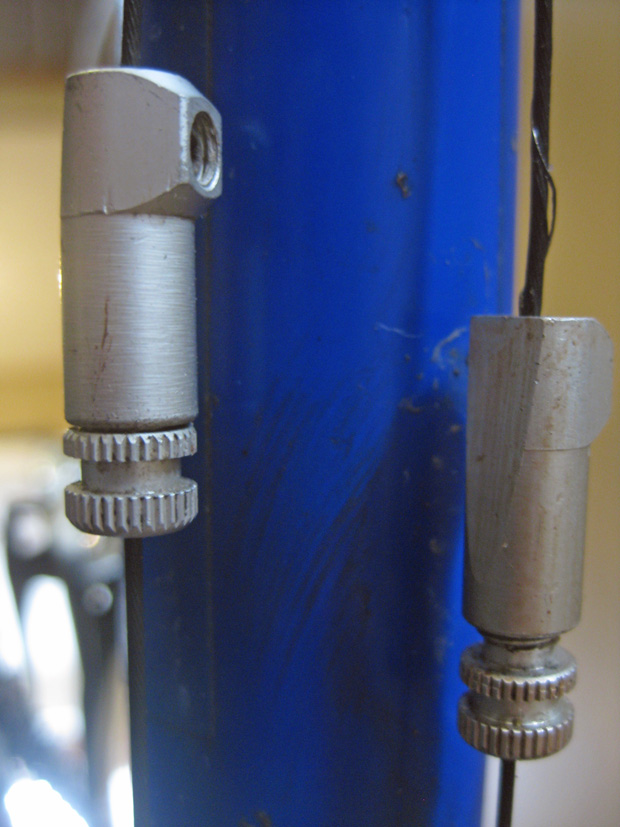 Simple no-tools cable decouplers quickly and cleanly separate the bike sections, and the case is only slightly larger than the wheels. 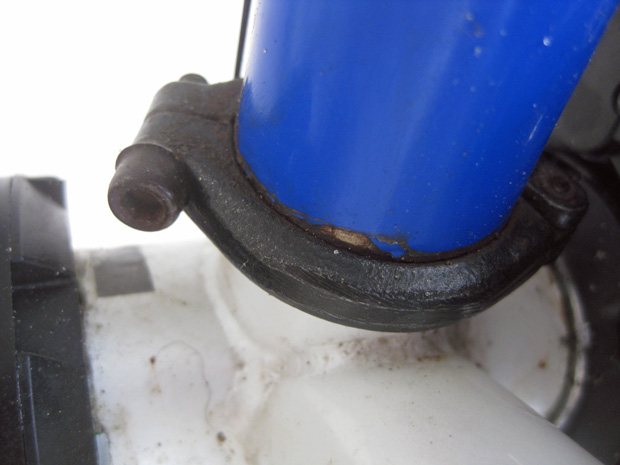 The frame coupling is barely noticeable, just a small clamp at the bottom of the downtube and two seat lugs instead of one.

What modifications/additions have you done?
Not too many, since I have other “nice” bikes for riding at home, and this is all about the ride rather than about the bike per se (you can tell from the dirt on the bike in the pics!). It came as a complete package full of Ritchey Pro alloy components (wheels, cranks, bars, stem, seatpost, saddle). The alloy part works great because I’m constantly breaking it down and building it up, and there’s no point in worrying about torqueing carbon parts or getting them banged in transport.

You’re going to make fun of me, but I seem to keep busting saddles despite being 64 kg, so I’ve gone through a few of them. Just last month I swapped to a Specialized Romin and love it. Other than that, the only travel-related damage has been a rear derailleur and the occasional truing of the wheels. During my year abroad travelling throughout Europe, I did bust a few spokes, but I’ll put that down to the Belgian cobbles rather than my weight! 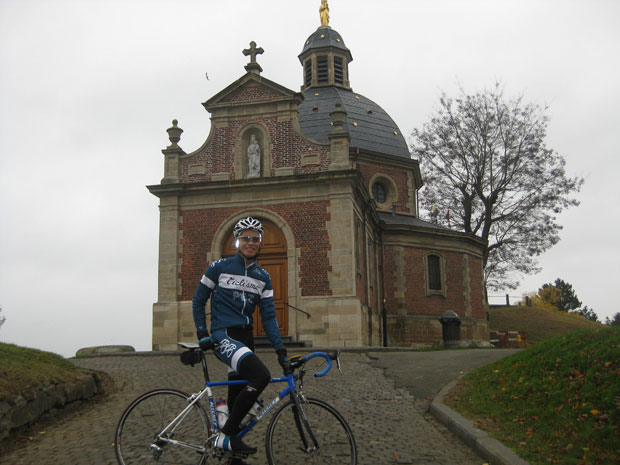 Stevo and his Ritchey on the famous Mur de Grammont

Any weaknesses or compromise as a travel bike?
It is steel, and there is an extra set of seatpost lugs plus the downtube disconnector and clamp. So it certainly weighs more than my other bikes but it’s not an anchor either. It’s also nowhere near as stiff laterally as other bikes, but that probably contributes to the ride. Plus I think the sweet ride makes it feel much lighter than in reality. And all of this is balanced by the fact that I’m riding my own bike that fits me perfectly. I’ve taken it on some wicked descents in California and Italy and it’s me that holds the bike back, not the other way around. 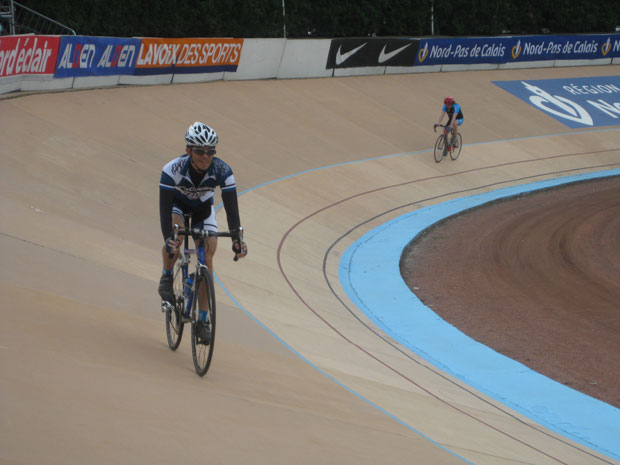 Steve and his Ritchey “Break”ing their “Way” into the famous Roubaix velodrome in France.

So is the Ritchey strictly a travel bike?
My garage is pretty crammed with bikes and I keep thinking that I should just leave the Ritchey boxed up and ready to go at a moment’s notice. But honestly the BreakAway rides so nice and distinctly different from my carbon bikes that I just can’t bring myself to leave it just for travelling. Over the course of a year, I probably do a third of my road riding with the BreakAway. 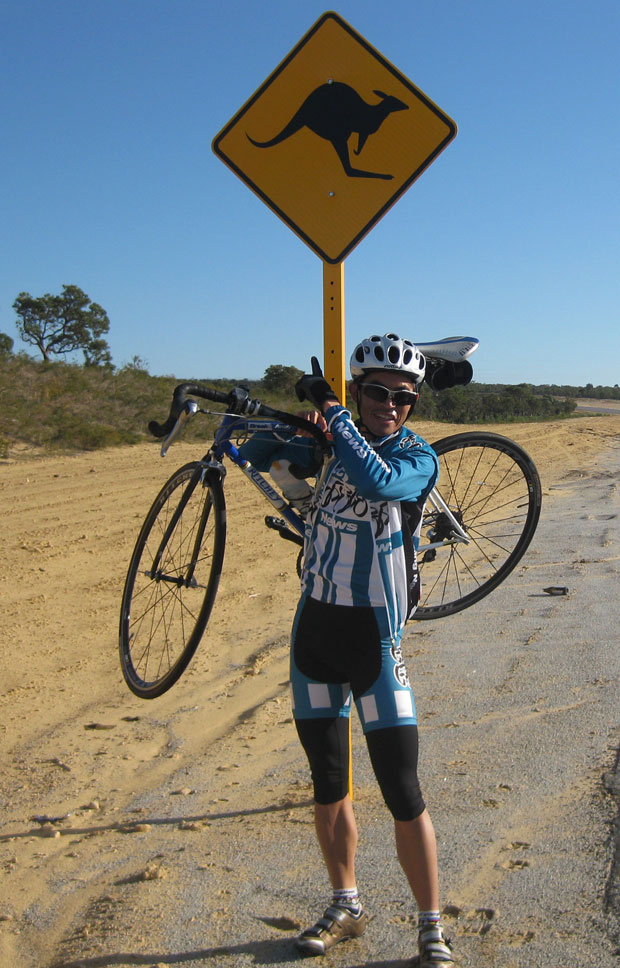 How many miles/kilometers do you do a year?
The good thing with being an exercise physiologist is that I can pass off my cycling, to the tune of 8-10,000 km a year, as work-related “professional development!” Writing for Pez just adds to my excuses for riding. Seriously, I got into exercise science thanks to cycling and racing, so I don’t see any reason to stop. I try to practice what I preach and train and ride throughout the year.

I live in an area with endless quiet farm roads, and I can commute by bike either 16 km one-way or extend it to pretty much infinity. I’ve raced seriously and non-seriously throughout the past 27 years on the road, but my passion has become cyclocross. We’ve got a terrific club here with the St. Catharines Cycling Club, and it’s great riding club races, TT, and weekend hammer rides with them.

Favorite riding area?
It’s pretty hard to beat Bormio and all the famous climbs around that area. My favourite road event that I’ve done 3 times now is the Highlander Century Tour in the Finger Lakes region of New York early September. 170 km with 3,200 m of climbing, including some 26% legbreaking grades. Plus a mountain TT the night before to soften up your legs. It’s a great farewell to summer.

Tell us a few of the places you’ve taken the bike?
I’ve lost count, but I’ve probably taken the bike on at least 40 airplane trips, including taking it with me through our 15 month sabbatical throughout Europe in 2011-12. I’ll usually bring it with me even to a 4-day conference, as it doesn’t cost me anything to bring it and even getting one ride in to explore a new city or clear my head is a huge bonus.

But aside from many trips throughout North America, it’s come with me to Europe many times (Roubaix, Flanders, Stelvio, Netherlands) and also to both the east and west coasts of Australia. 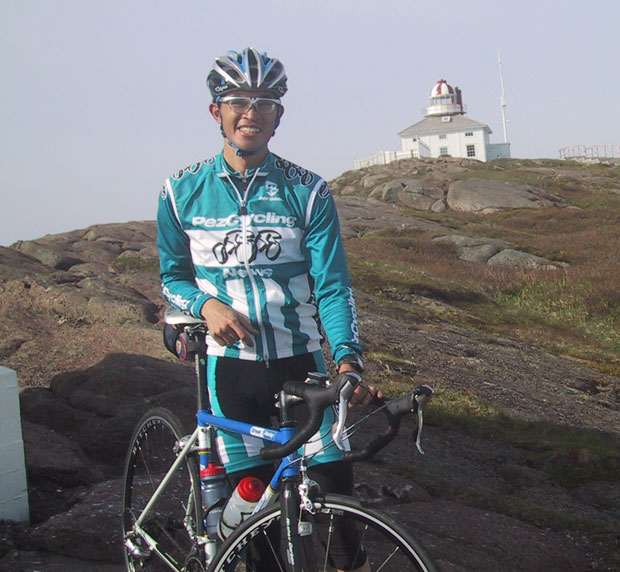 Riding to the easternmost point of North America in Cape Spear, Newfoundland. Some wicked climbing to get there!

Favorite riding experience on your bike?
There has been so many great moments, but two stand out. One was riding in Bathurst, Australia in 2009. I was on a quiet road when suddenly, this kangaroo starts hopping along right next to me for about a km or so, perfectly matching my pace while my jaw dropped and I prayed that it wouldn’t suddenly decide to dart across the road.

The second would be during the Pez 10th anniversary party in 2012 and riding the Gran Fondo Damiano Cunego. I’ve written about it before, but I spent the final 15 km ripping it down this beautifully paved descent while chasing Cunego himself and the leading duo heading into the finish back in Verona (we did the “medio” course), where I sprinted in right behind the duo and you could see me in the papers the next day being mistaken for the 3rd place finisher by the announcers!

Future upgrades?
This bike’s all about the ride, so I’ve just pretty much just replaced things as they wear out rather than upgrade. Having said that, what I’m really excited about as a new modification is that I’m testing out the brand-new Pioneer SGY-PM00H79 power meter and the accompanying SGX-CA900 computer, so I’ve just got them onto the Ritchey along with a set of Dura-Ace 7900 cranks. This system has been tested by the Belkin team, and has the unique approach of completely independent power monitors on each crank, and you can have real-time view of your left and right leg power profiles and efficiency. Look for a review soon on Pez… 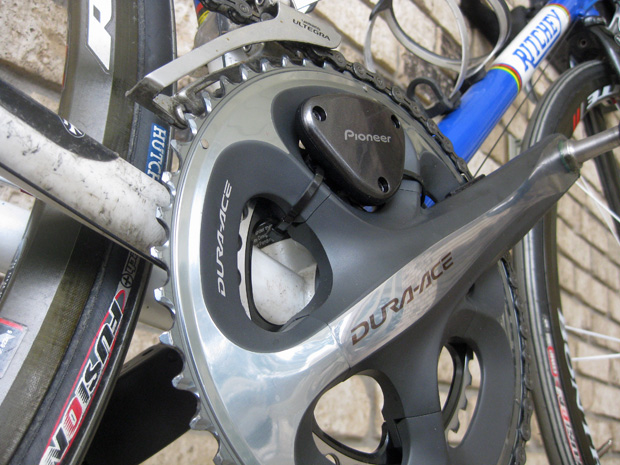 Last words?
It wasn’t an option at the time, but if I had to do it all over, I’d get the BreakAway Cross, which opens up another world of possibilities for riding depending on what tires you pack. This bike really is the best of both worlds in being a travel bike that’s also a great ride, and I’ve never been on a trip with thoughts that I’m somehow settling for a second-string bike.

Katusha Team in Qatar and Mallorca