Something that struck me this year was that Interbike lacked the slew of show stopping innovations that others have had. Nothing stuck out as earth shattering news, but fear not, as the slobber fest started early when we popped into the Zipp booth to take another shot of the new Dimpled 404.

Zipp already have the best in rim shape (as evidenced by the fact that several companies use their rim). But only Zipp have the dots to make the quickest profiles in cycling a touch quicker. 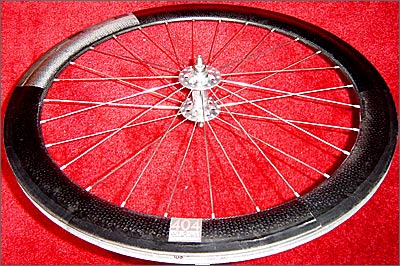 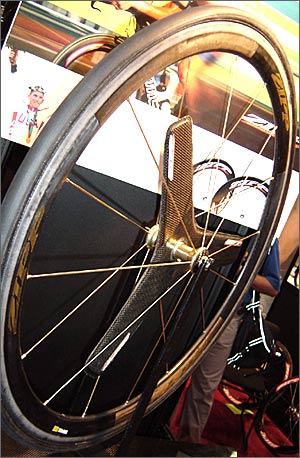 It’s actually a boomerang and a half sandwiched between a bit of carbon fiber and does absolutely nothing. But the rim and bearings will still run you about 3 grand!

Next on the block were the folks at American Classic. They bring the Silvery new 420 to the market, and it comes with all the options that AM Classic give you with all of their wheels. Spoke choice, a newer hub (silver or black), and a ceramic bearing come as options for American Classic’s models for 05. 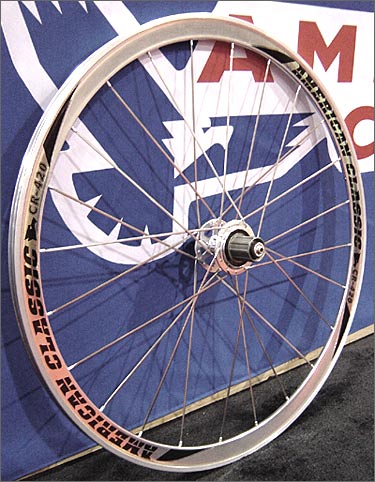 On the super exotic front, Lightweight were a feature at a few booths. Their standard (not that anything they make is “standard”) built wheels are sweet, and cost quite a bit, but after having them hand me one of these ultra-light hoops and say “try and flex it”, my jaw dropped. Even the lighter than light Obermyerer set (fewer spokes) was clearly more stiff than anything I have ever tried to bow. 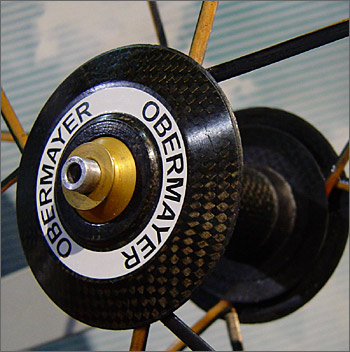 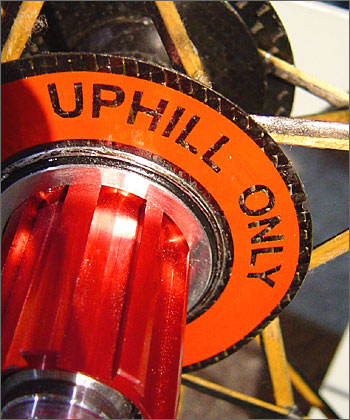 This set uses a very special resin that takes even more weight out, but since it doesn’t dissipate heat well, they don’t want you bombing back down whatever you just rode up.

Lightweight also venture into the flatland stuff and have a tt disc. But given the pedigree, it and a standard light weight front pop in at close to the same weight as most other rear wheels alone… 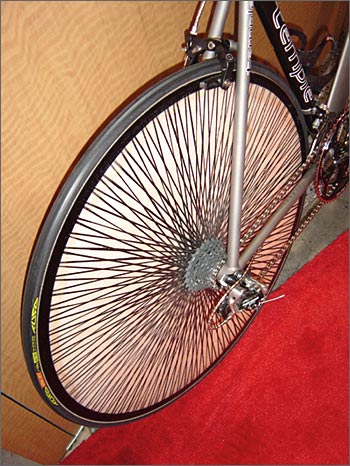 There were lots of new hoops to be seen, but last in this stop is with the guys that have lots of show along with go. Stella Azzurra’s set are not the lightest around, but are very aero. They also look as slick as it gets. 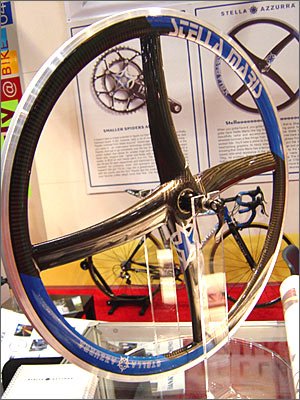 An interesting detail that most miss due to the sweet shape is the little channel in the braking surface. We have this on another set of wheels (not Stella’s) that we will post a test on, and have seen it on others as well. It will be interesting to see if it helps dissipate heat, or adds to brake feel as the channel gets filled as pads wear in (as the surface will be slightly bigger. 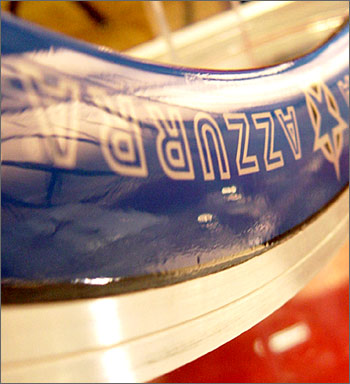 All in all a nice little sack of goodies… More to follow.