As a Tech guy, late July / August is a horrible time. I start to see press releases and leaked photos (from places besides PEZ) of new products that, in some cases, I’ve been waiting for in the flesh more than a year after seeing or using prototypes. It’s horrible because I have to wait to touch anything!

Bicycle Dealer Camp was in a fantastic setting for product use. 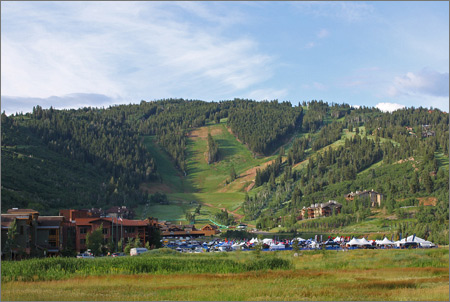 The walk through Park City Utah is a polar opposite of the Las Vegas morning and evening “Death March” up concrete overpasses (because the roads are cyclist and pedestrian death traps) and then through smoke choked casino floors into the bowels of the building for the show. 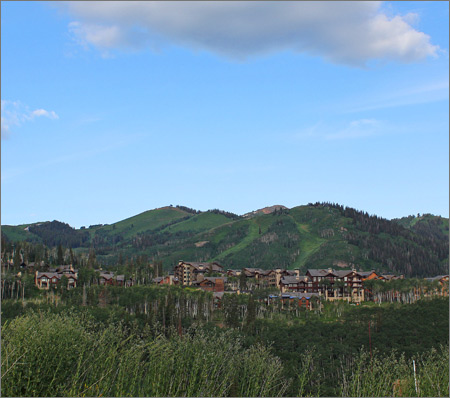 Not a single person was handing out hooker cards here…

I left my lodgings and joined the commute that had people riding, driving or taking a short shuttle ride to the venue…

And the shuttle is no place near the Dirt Demo haul for Interbike which reminds me of prison films where an innocent man is getting hauled out to some middle of nowhere penal work farm.

So, to the stuff then…

Ritchey Bicycle Components have a few new products this year and the two that stuck out for me are a new Stem and Post. 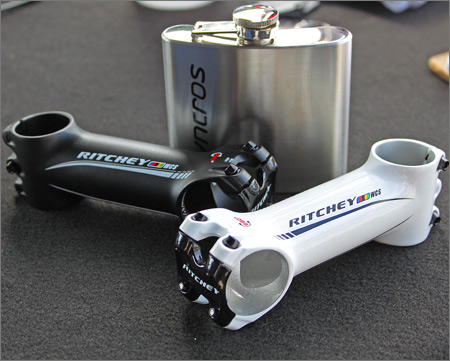 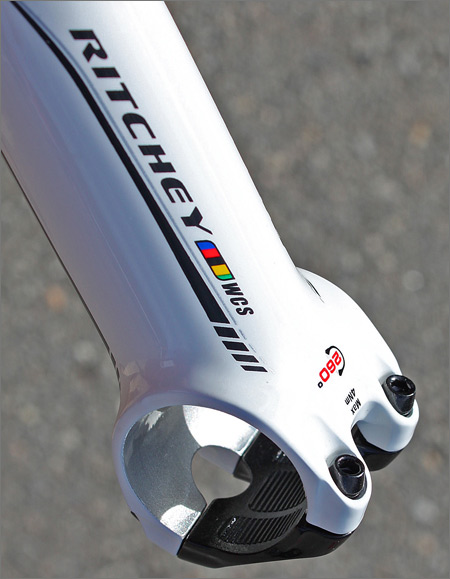 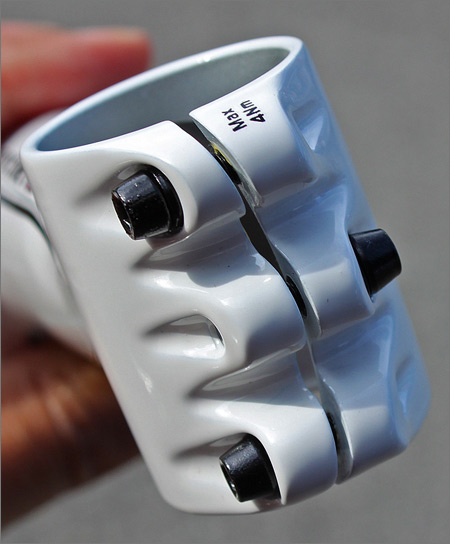 Three bolts instead of two and a curve rather than a diagonal cut, but this will do away with a lot more focused pinch stress than straight cut stems. 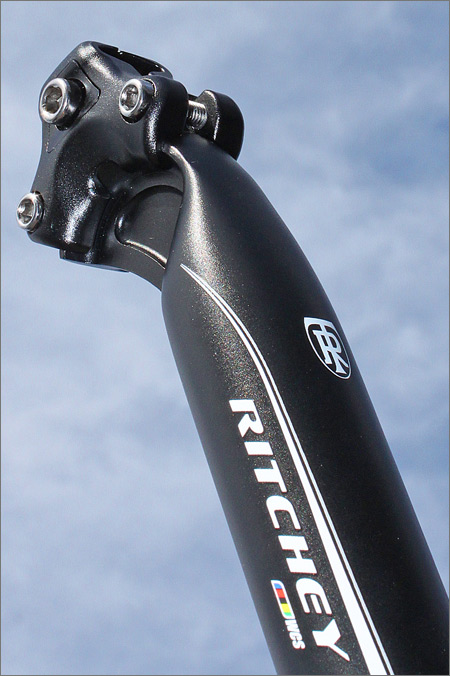 Nothing to report yet as this is a new design and I didn’t have a mono rail saddle to play with, but with a bit more separation of seat clamp and tilt hardware, the Ritchey design should be more friendly to small adjustments than Selle Italia’s first effort.

TEXmarket keep growing in brand awareness and that’s no small task given every time you’ve seen them, you don’t see their brand… (Like say this year’s Tour podium…) 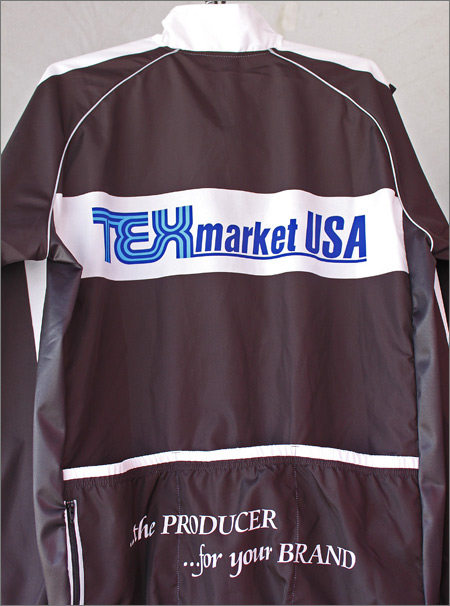 What caught my eye was their color swatch / table cloth. A huge range and they have a lot more variation than what’s printed. 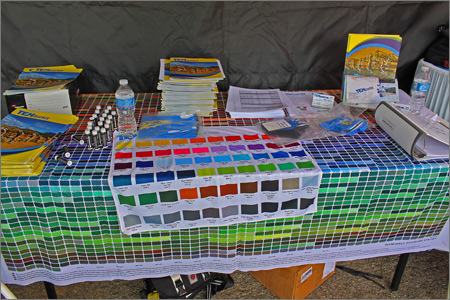 The company, based in Bolzano Italy, use either Italian or Swiss fabrics…

The large selection of fabrics, bib chams etc is what you would expect from a company that likely produced something you’re wearing or something you’ve worn recently, given the number of companies that use them for fabrication. 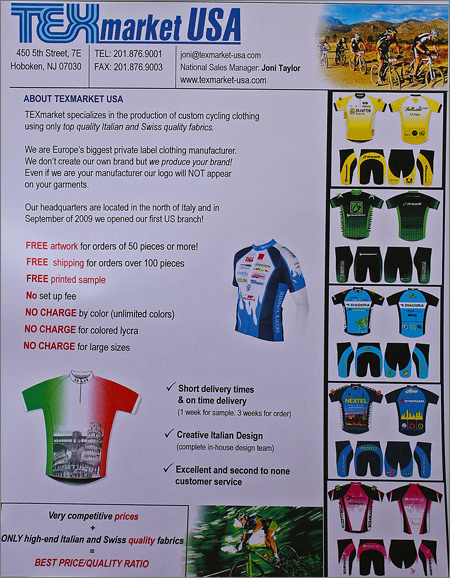 They have tons of options, full graphics capability (virtually any visuals you have ever seen from another brand are available) and a lot of up-charge services for many companies are standard with TEXmarket…

Selle San Marco, through Vittoria Industries were in house with a new twist on a LONG time classic in their updated Concor…

Easy to spot the new and old version and the looks seem very different. 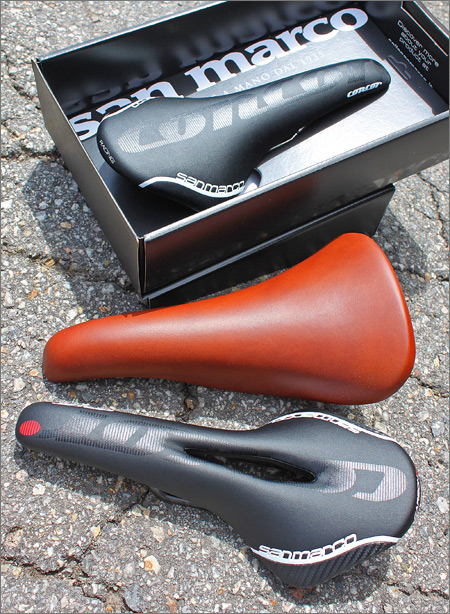 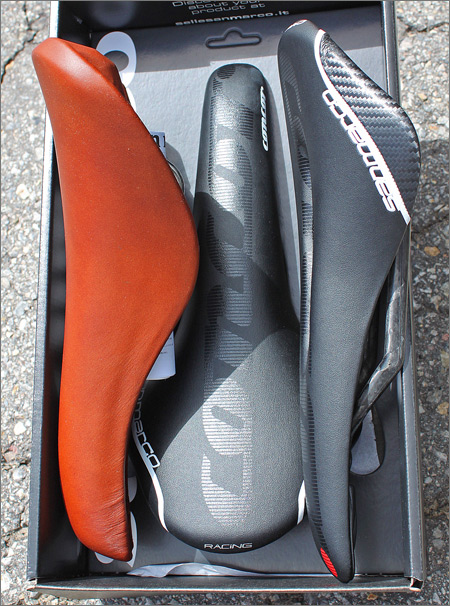 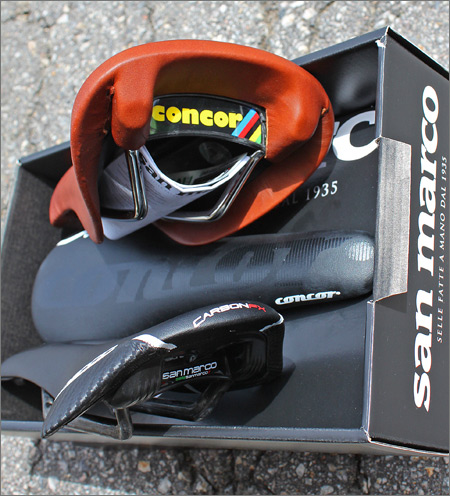 The biggest diffs other than looks are weight and the addition of a love canal… More details to follow.

XPEDO pedals had their newer road line at camp as well. 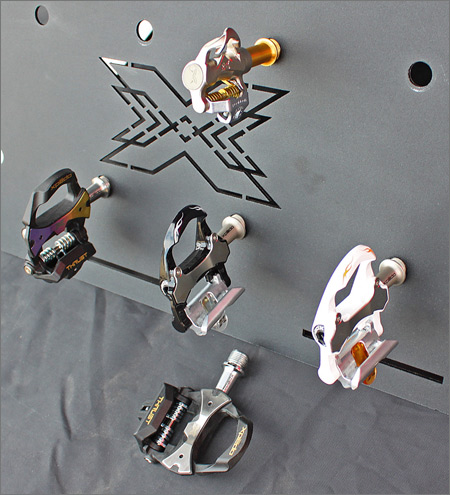 I’ve had a few emails lately asking for a bit more info on these, as the top line models have very competitive weights…

Digging a little deeper, the Thrust 8 (Black) is a carbon body and Ti spindle with a Ti wear plate, so the 170 gram weight doesn’t seem out of reason. Neither does the weight for the magnesium bodied, cromoly spindled Thrust 7 (White) at 245 grams. 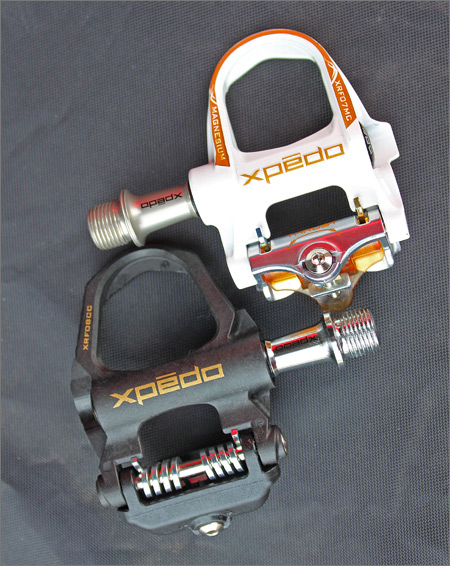 The 3 stand out features for me are that both pair have 3 sealed cartridge bearings (rather than bushings or pins like a few well known competitors), both have tension adjustment for release and both are priced very well… $109 Suggested Retail for the Magnesium and $239 for the Carbon Ti. 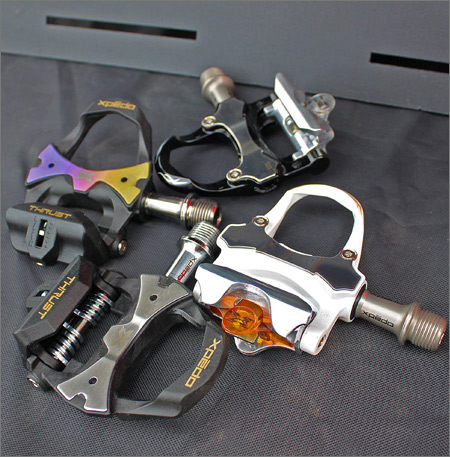 Xpedo will update their site shortly on the 3 bearing thrust 8 and any retailer can get set up with Xpedo by giving them a ring at 800-275-2129.

Very few details but some piqued interest surrounded the almost clandestine movements of Dr. Allen Lim… I didn’t get a chance to talk to him but did see him dropping what appeared to be some sort of bindles of powder off at a couple of key places… 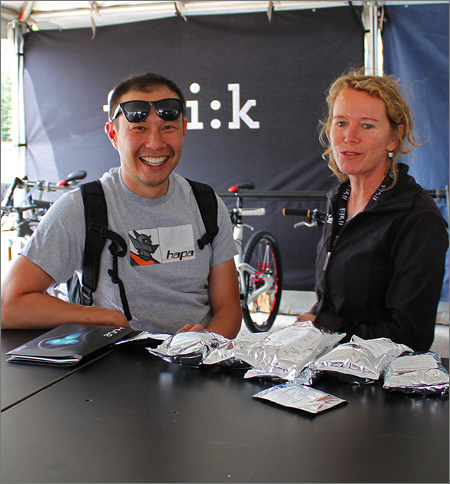 Now I’m not one to pry, but it turns out that there is a Secret Drink Mix that’s making it into only a select group of hands. 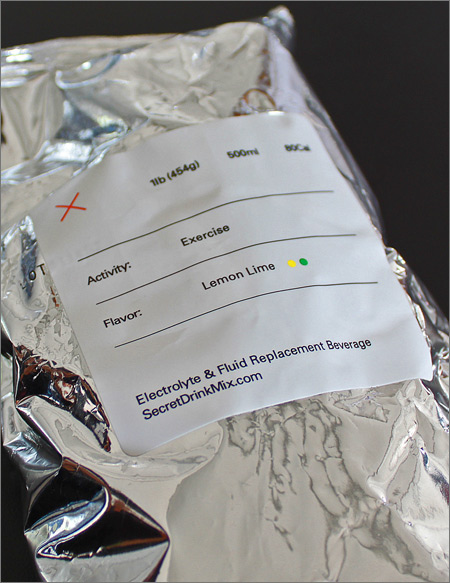 Well maybe not that “select”, as I’m part way through a bag… But this stuff mixes very easy without clumping and has a very mild flavor that is no place near being too sweet. I’ve been using it in Arizona to replace a couple of the most popular brands of mixes for rehydration and it’s at least as effective with A LOT fewer calories and I swear it cleans up easier when you dribble it on your bike. No idea what’s in it but the web site should be rolling quickly. 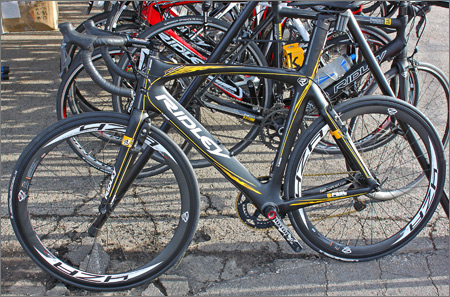 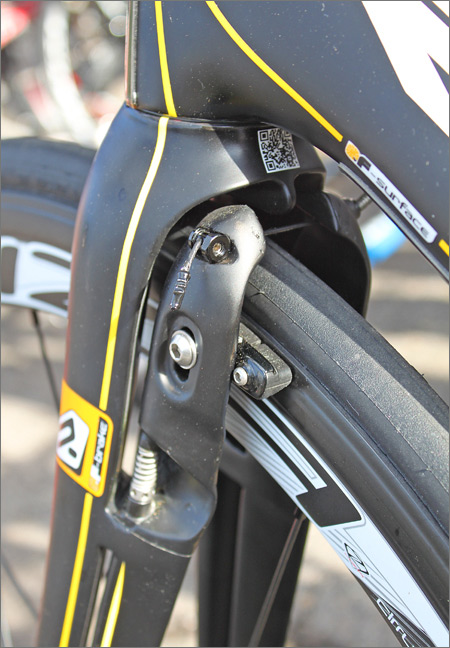 And into the rear stays. 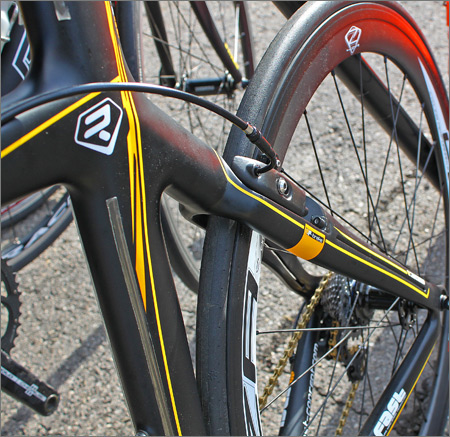 Making for a really interesting and potentially very aero set up.

This is still a proto and saleable units are not ready today and that makes for time to tweak the design. One thing that sticks out, literally (as they did looking at specialized aero effort with the Venge) is cable routing.

There’s room in the head tub to minimize the cable flare up front. 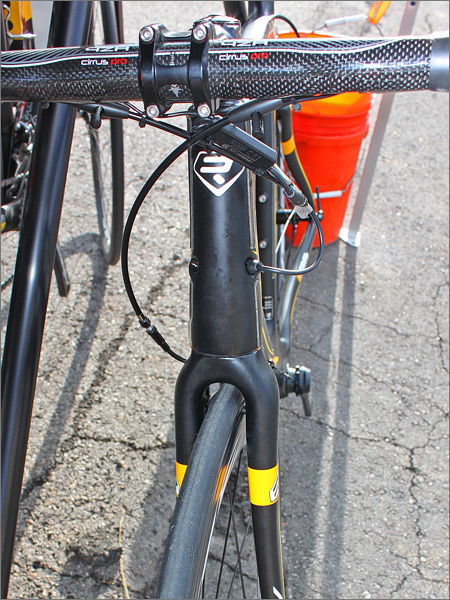 And an S bend bit of hardware and a drive side cable exit for the rear brake housing or an exit straight out the back, made possible and fairly easy with this being ISP would seem easy. 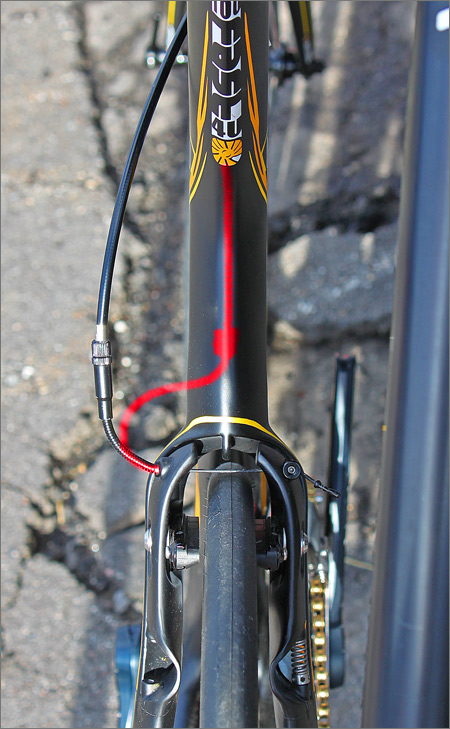 Whatever the case, I’ve wanted to see this bike in the flesh since the protos were at Interbike a year ago (and couldn’t be photo’d). It’s an exceptionally clean looking bike that represents the new thinking and change that the bike industry seems to be lacking a bit.