Some great gear on display at the 2012 Sea Otter Classic… Steel and Carbon bikes, new wheels, cranks, upgrades, power meters, things to stuff in your ears and make you happy between your legs!

As “between your legs” is the only thing most of you have on your mind now so we’ll get to it.

The guys at Faster are bringing a new tool to the fit game. While they had it on display, I was unfortunate to have perfect timing and leave right when they showed up so you’re getting pictures from their Wind Tunnel and 3D-fit center… 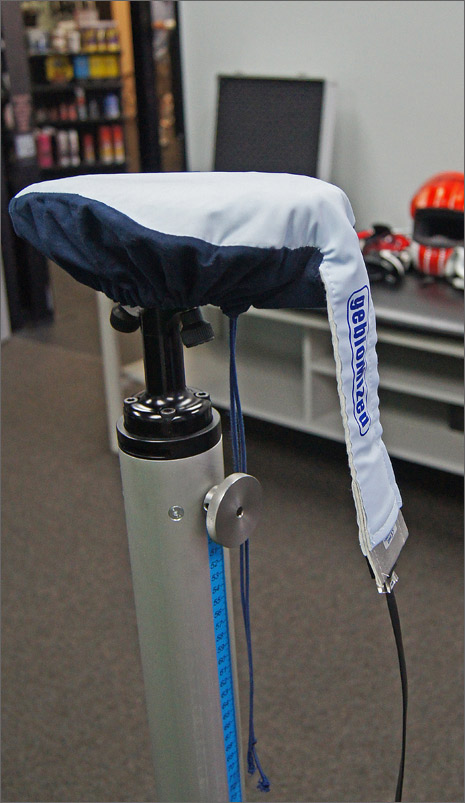 The unit is basically an extremely sensitive bag. It will slide over any saddle and stays in place well while the rider mounts the bike.

Pressure sensors cover the top half of the unit and detect the amount of pressure applied when you sit on the saddle and pass the data through a cord to a receiver sitting safely out of the way (yeah, this isn’t your average fit cycle, so for more standard bikes you’ll velcro the cord to the seat post and top tube for safety…). 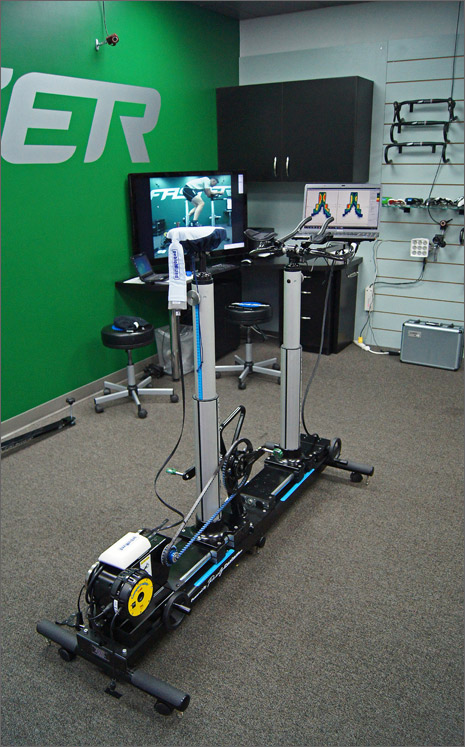 Pressure alone isn’t what’s special here. The trick is that this captures full motion info from the entire saddle surface!

They can take also run motion captures side by side for two different saddles or the same saddle but different adjustments too.

What this tech will do is allow instant full / quantifiable understanding of what the rider is feeling (good or bad).

That is a HUGE help. Of course it will help in performance fitting for athletes stuck with certain sponsors saddles but the impact goes a lot deeper into recreational rider benefit. Imagine taking the guess work out of saddle choice!

The thought that you can know if a new saddle has the same pressure pattern as your old (but no longer available) favorite is great news for a lot of folks. So is being able to easily identify what you don’t like about the saddle you’ve been using and KNOWING you’re choosing something better before you leave the shop…

This is going to be a great product for highend shops and will be available shortly through:

Oh yeah, that second benefit to seeing these later at their offices… 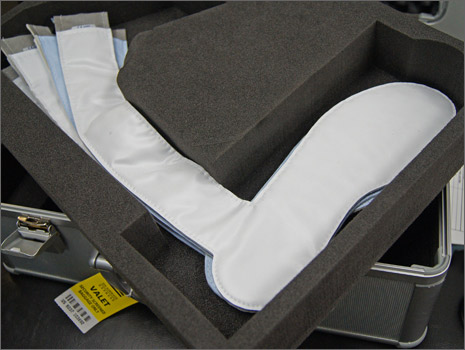 Volagi were easily the feel good folks at the show. Fresh off of working within the legal system to confirm that innovation is still allowed by more than one company and the color red wasn’t really off limits on bicycles, they put a little twist to their rigs and decided that steel (double butted) was also allowed… 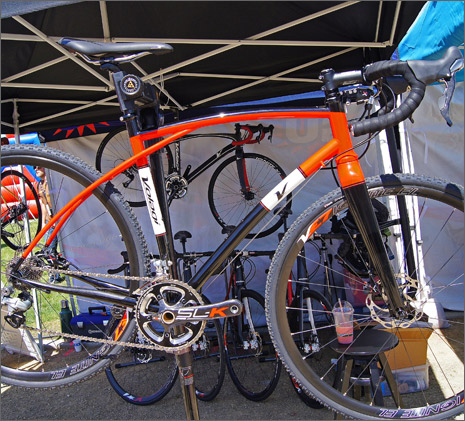 The new Viaje runs similar geometry but tilts toward a little more comfort / tour with a standard 27.2 seat post and rack and fender mounts. 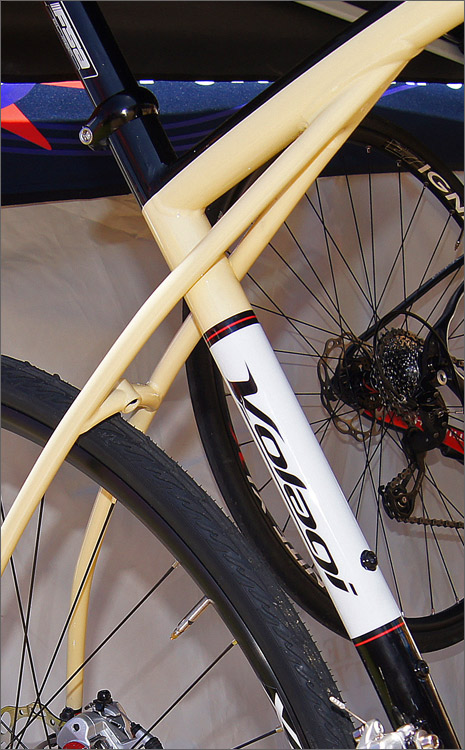 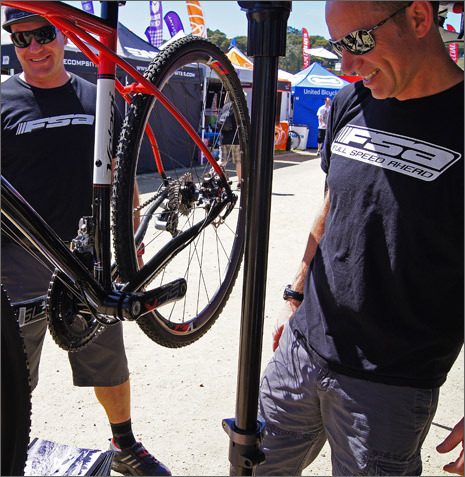 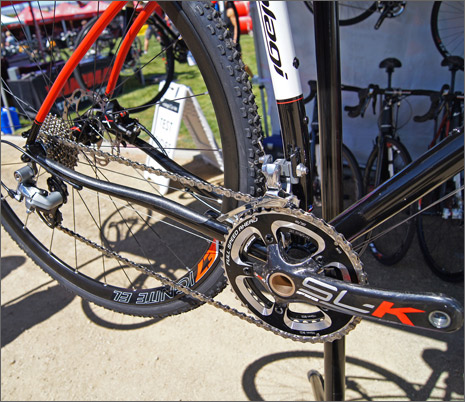 Also working in Metal were the guys at Quarq. 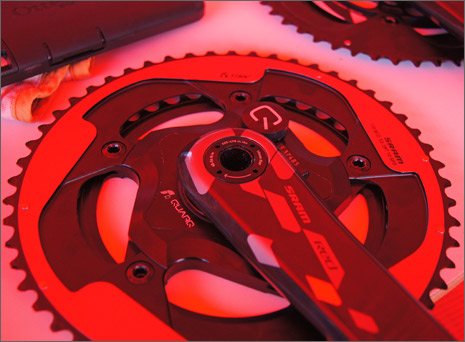 They’ve decided to take what is now a basically bomb proof part and make it, eh, bomb-proofer by changing the spider packaging of the strain gauges to make the entire package more solid… 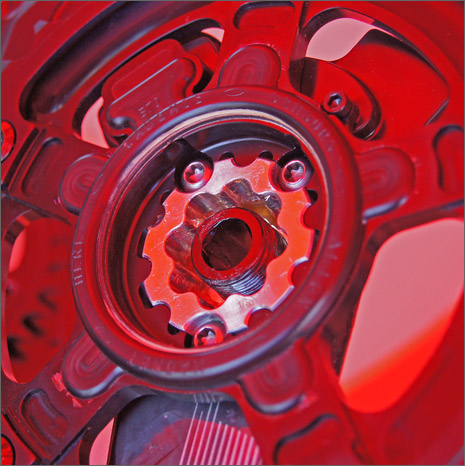 And the new unit… 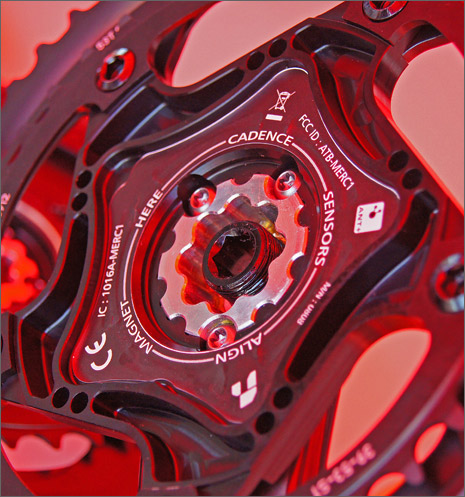 The net result is an even better sealed set up that is also a bit less flexible. The integration further into the spider (for lack of a better description) means more consistent movement / less flex and that’s allowing Quarq to go from 10 gauges to 5. It also means that the calibration changes required when you changed chain rings will no longer be necessary.

I expect availability to be a fairly soon given the finish quality of the parts on hand. 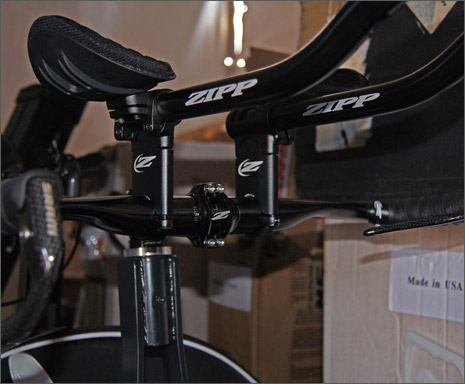 This is a full cockpit, ready to roll with base bars and extensions with updated bends for more ergo choices. 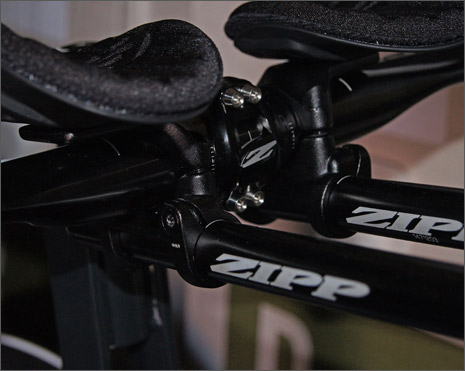 Plenty of mounting adjustment is available with top and bottom as well as reach, rise, spacing etc. Respectable weights, very respectable price points and a set up that’s built to be very durable.

Something that’s not as yet been built to be durable are the ear pieces for team comms. Guys still taping things in their ears for race radios are very simply missing the boat. 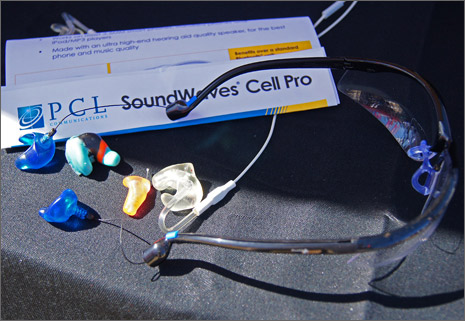 While racers still struggled with a problem solved years ago, loads of other sports have been using PCL product with fantastic results. There are several versions and virtually all of them are far more secure than standard buds and tape, or even the generic “active use” ear buds that claim to be secure.

I have their kit for moto use, shooting and high end audio and would simply not use anything else at this point. 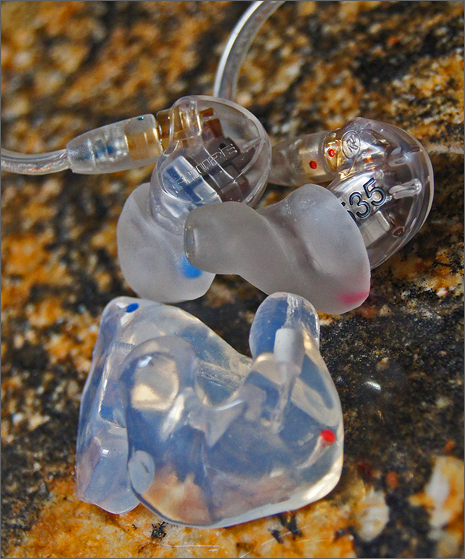 I’m not advocating using these custom inserts for audio use in both ears on the road. In fact while I don’t condemn those that use ear buds, I wouldn’t (custom or otherwise).

I’ve seen a rider get hit because he swerved across traffic he didn’t know was there (couldn’t hear), and I have personally run into another rider who swung left as a group was passing because he couldn’t hear us shouting. 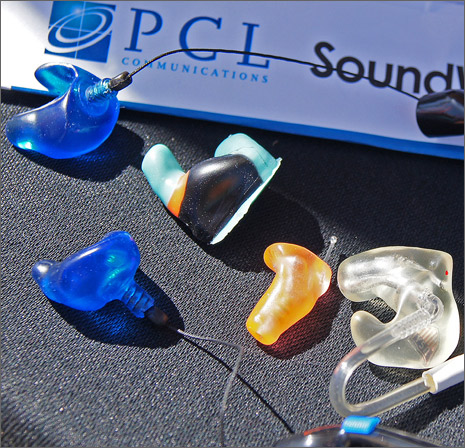 Open roads use aside, for race radio (or insanely good sound quality off the road, virtually perfect sound blocking for other use) there is nothing more secure, less fuss and better performing than custom molded ear plugs.

Seeing PCL at Sea Otter was a damn nice sight. 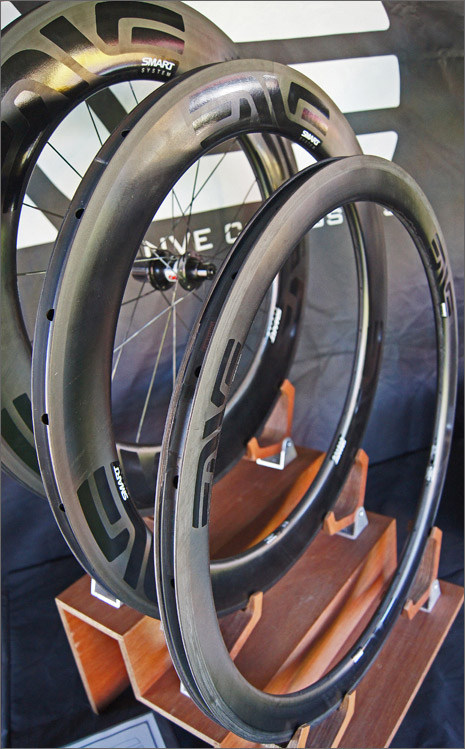 ENVE released their SES tubular wheels a while back and they’ve performed very well. Clinchers are a new edition to the family and are ready to go in 3.4 and 6.7 combo depth pairs now (the 8.9’s are just round the corner). 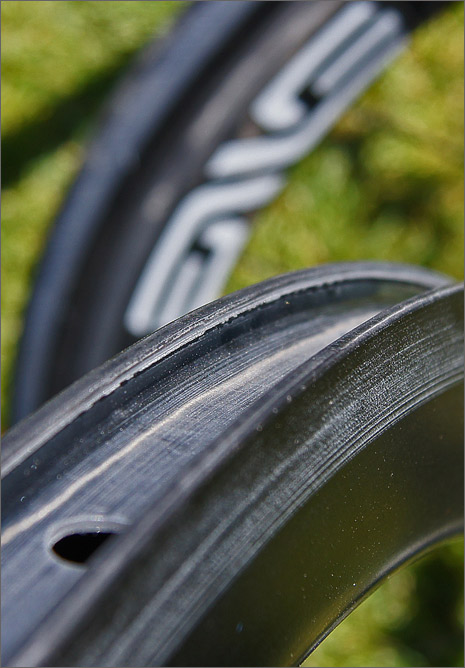 ENVE have changed a few things with their clinchers from the past to the latest version but will retain a lot of the proven tech including the molded spoke holes. 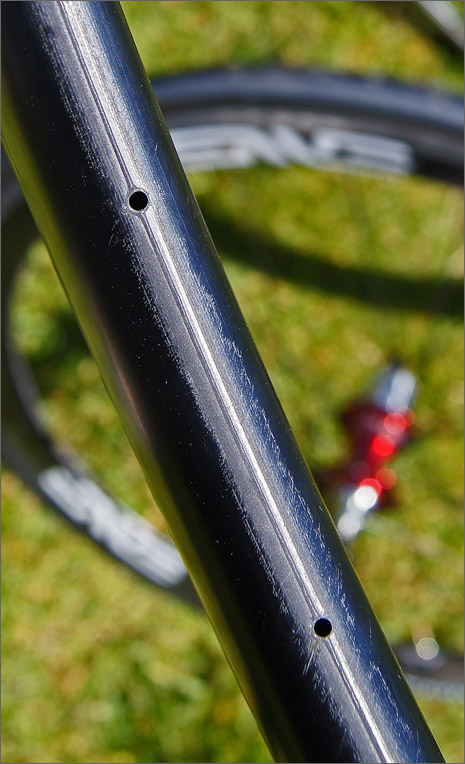 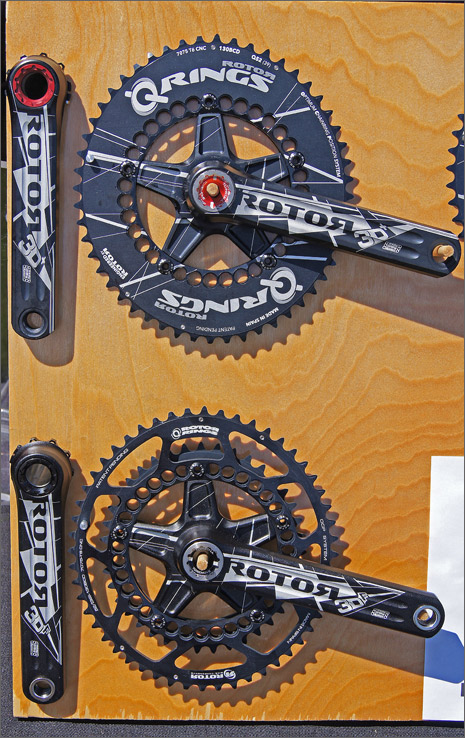 Very close in looks to their very popular 3D+, the new version is a bit easier to produce using forging for some of the components. 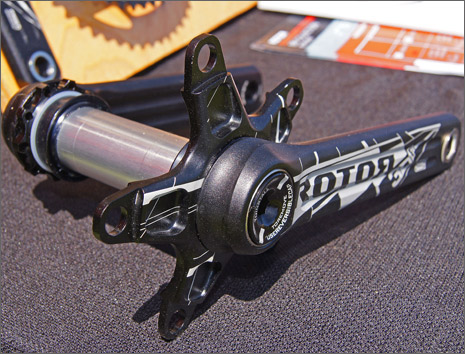 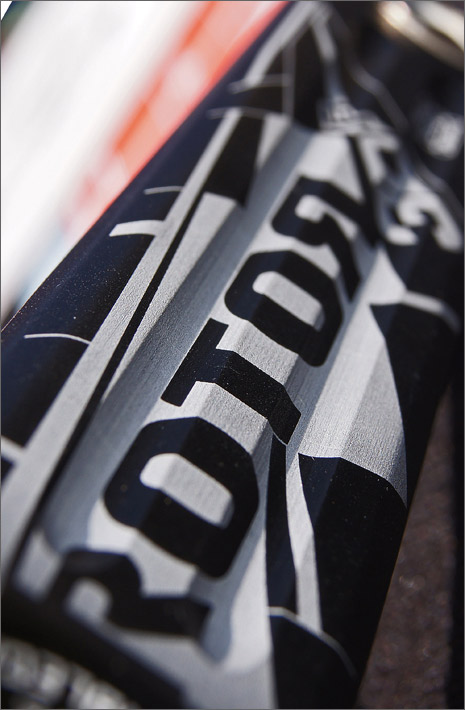 No word yet on the logical stiffness increase that forging might produce, but then we’re also not up to speed on what type of forging Rotor will use here.

You should see them in shops near you starting now-ish.

Devinci Bicycles have been around for a couple of decades but you’ll be excused for not knowing the brand so far. They’ve leaned toward the mountain side for quite a while but have recently expanded in both exposure and model focus. The latest version Road for the company is the updated LEO… 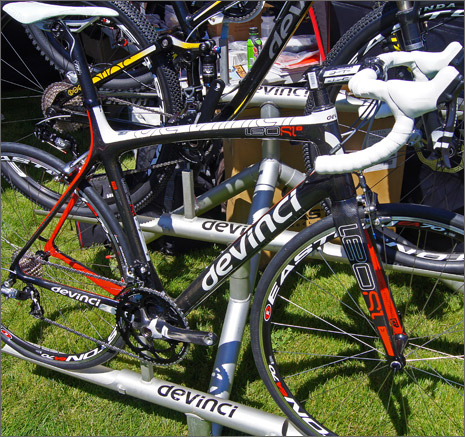 Devinci are producing the bike with what they’re calling the DCF concept. “Dual Core Fusion” in a nutshell means compliance as a function of the upper and stiffness down low… 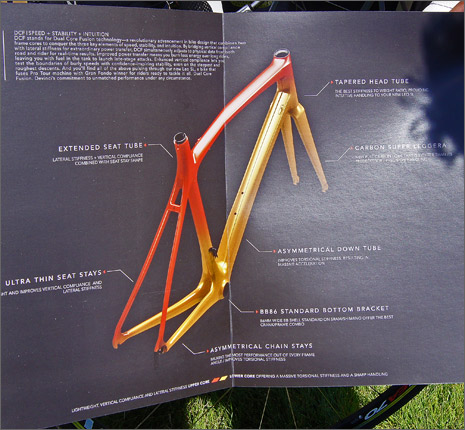 Three different carbon types, different layup and different pressures for the LEO to produce what Devinci feel is their best frame effort to date. 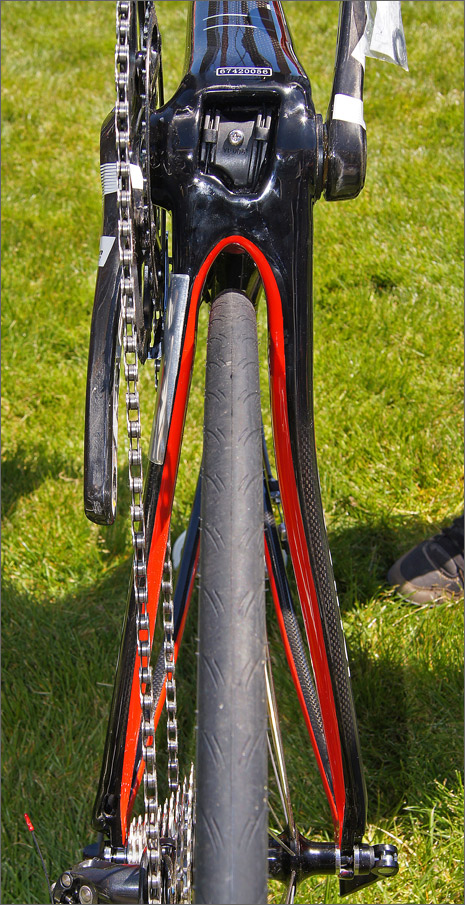 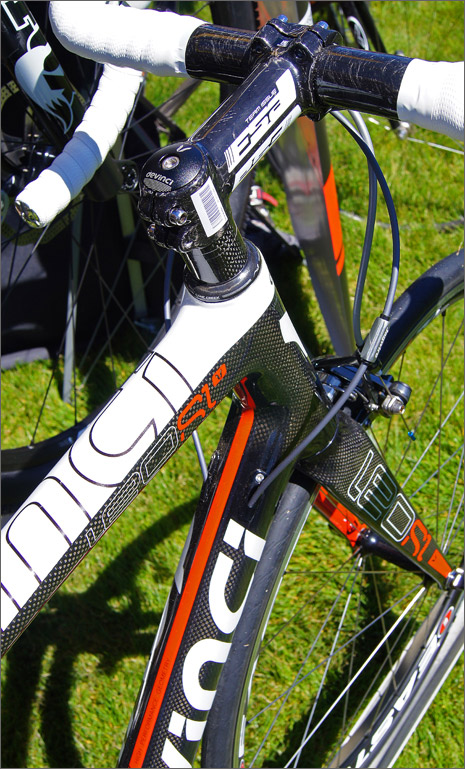 The fit and finish quality of the display bikes were very good, as was the condition of the bikes on several riders from their team competing at Sea Otter.

The LEO is available now.