The popularity of mixed terrain riding coincides nicely with a slew of new disc-brake equipped wheel options designed to offer a one-stop solution to any mix of road and trail you might care to ride. The American Classic Argent series may be among the most versatile, so let’s put them to the test… 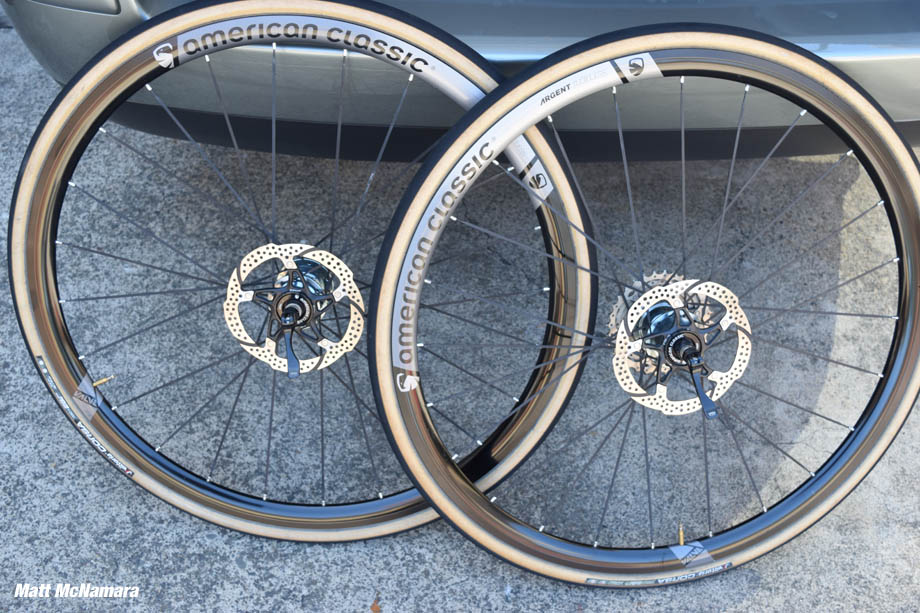 The driving cross wind is pushing hard on my front wheel, trying to pick it up and dump me un-ceremoniously onto the gravel as I traverse the Bay Trail near Palo Alto, California on a blustery Sunday afternoon. It is my last ride on the new American Classic Argent disc brake wheels that I have been dragging over hill and dale for the better part of two months now, and I am glad for the challenge. Inching forward on the saddle, I am literally trying to force the front wheel deeper into the dirt to stave off nature’s intended calamity. This is fully immersive riding and, thankfully, the bike remains stable save the occasional sideways lurch from a big gust of wind. That I am astride disc brakes seems of little consequence in wind this strong, most anything would get tossed around, but it is the first time I’ve really felt the influence of the wind against the rotor in the 1,200 or so miles I’ve ridden getting to know the wheels. 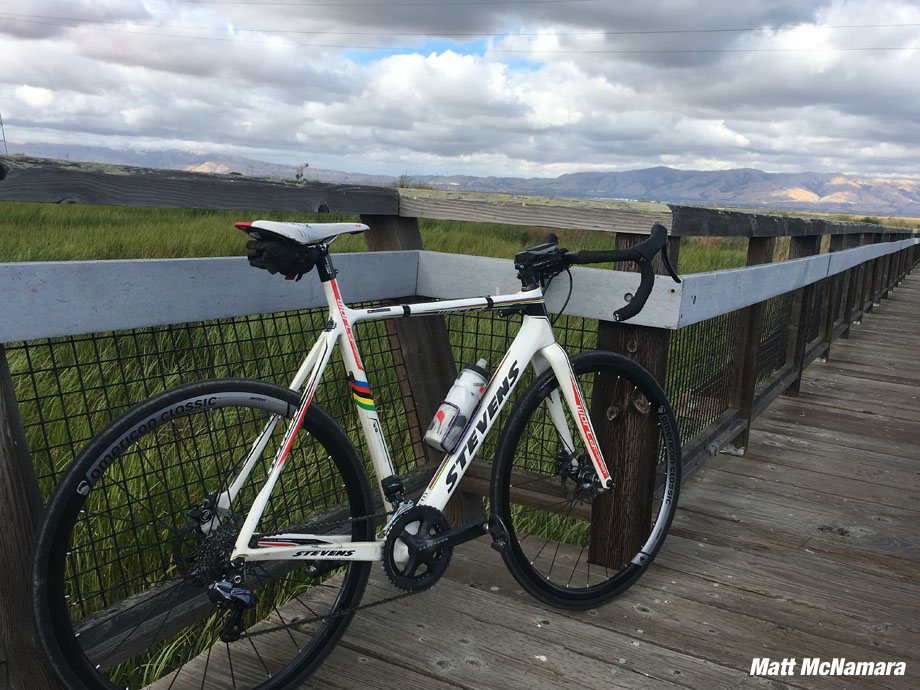 The Project
American Classic knows a thing or two about wheels – having been at the forefront of their development over the last four decades. I still remember lacing a set of 28 spoke Mavic G.E.L. 280’s onto some American Classic Hubs in the late 80’s to create an ultimate criterium wheel set, and man were they fast. Too light for my style of riding at the time, the rims lasted all of three races, but the hubs remained part of my arsenal for a long time.

Three years ago the company came out with the Argent aluminum tubeless series as a training and race quality wheel on a lightweight aluminum rim. Company founder and wheel Guru Bill Shook (Pez interviewed him here) used a unique three spoke grouping on the Argents to create equal tensions between drive and non-drive sides on the rear wheel. This combined with a weight of just under 1400 grams per pair, and a retail price under $1000, made the them immediately competitive on the race course and in the marketplace. Fast forward a few years and the company has recently updated the Argent series to include a new disc brake version that seems every bit as capable as the originals. 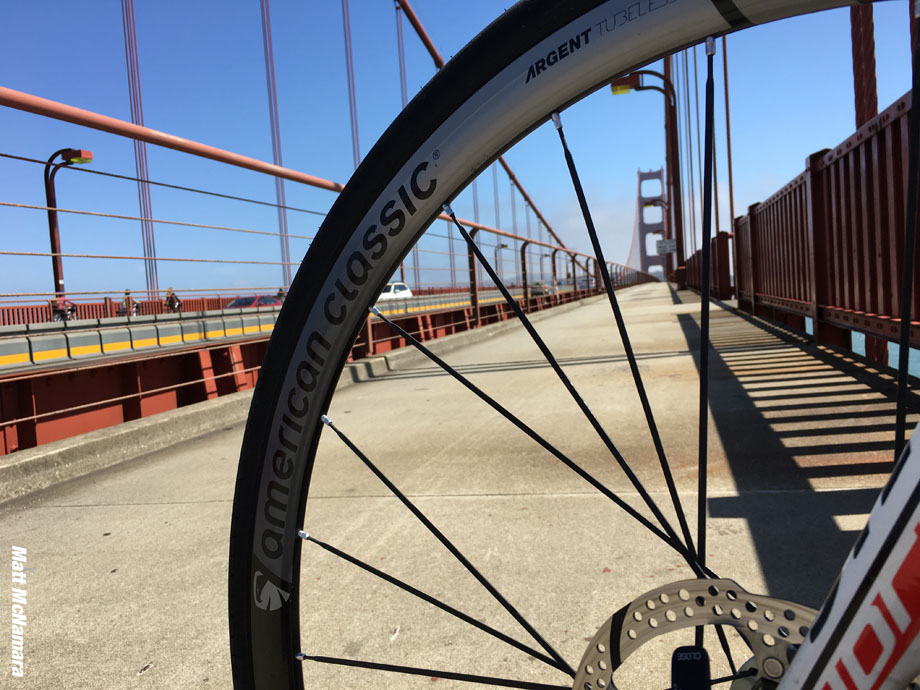 The Specs
The Argent Disc is aimed squarely at the road/cross/gravel audience thanks to the combination of 24 spokes, disc brakes, and massive interchangeability options for whatever you ride, or plan to ride. The wheels come ready for tubeless tires, including pre-installed base tape, they can also be easily paired with a good open tubular and latex tubes as well, my setup of choice in the first few weeks of testing. Part of this is due to the tiny series of barbs that are built into the bead of the rim. American Classic asserts that these bead barbs help grab the tire more firmly wether tubeless or clincher, and the reassuring series of POPS as the tired seated was notable on both types. 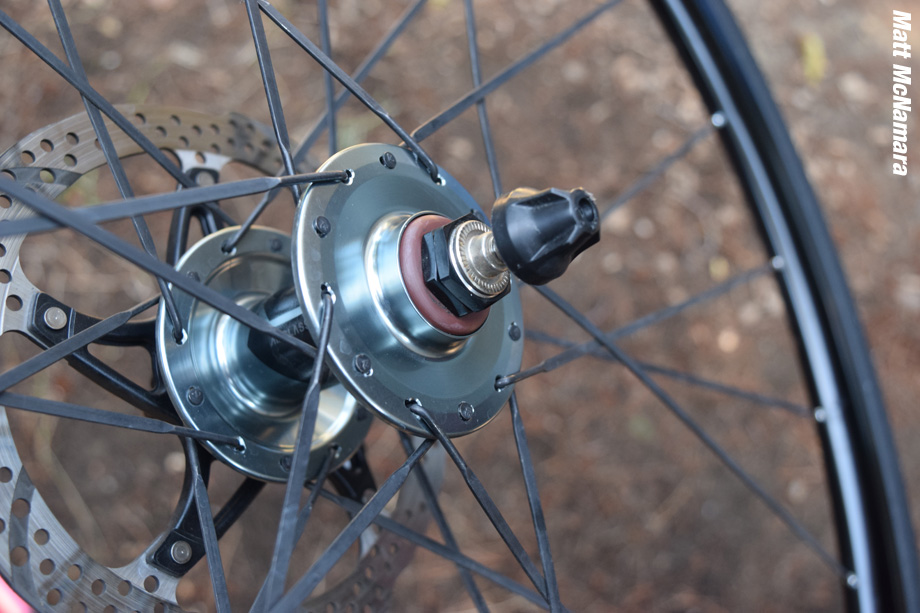 Not a pure featherweight at a claimed 1531 grams (708g front/823g rear), instead the Argent focuses on being a great performer in handling and resiliency. The 2 cross 24 spoke front and matching rear both use AC Bladed spokes and aluminum nipples. All the hub spacing, cassette and disc brake attachment options are covered, so you have lots of choices for outfitting the wheels, including hub widths from 135 – 142mm, skewer, 12 or 15mm thru axel front, and either a skewer or 12mm thru axel for the rear. Shimano’s Center Lock system is standard, with an adapter available if you want to run 6-bolt rotors. I ran a traditional skewer set up front and rear, and with the base tape my wheels, sans skewers came in just a hair over 1600g. Light, but functional.

The 22mm outside rim diameter (19.4mm inside) found on the Argent eschews the super wide trend of the day in favor of a slightly wider stance that actually covers the bases; from under 20mm to well over 35mm tire widths, while the 30mm side profile gives the wheel added stiffness and a modern stance that just looks tough when paired with the ice blue colored high flange hubs, which also serve to stiffen the wheel.

Gone are the micro hubs of the Argent rim brake version due to the added rotational and braking forces trying to tear the wheel from the fork when you grab a handful at speed. The added material of the new high flange hub makes for a solidly planted feeling, and provides a comforting stability even in quick transition maneuvers, like slaloming around bots & dots, dodging hazards or simply staying upright in the aforementioned cross wind.

Dressed in black from the rim to the spokes, the silver spoke nipples add a bit of class that compliments the understated graphics and lettering. The hubs are attractive, nicely finished in an ice blue color that looks great when the wheels are spinning fast in the sun with the bladed spokes. I am torn on which looks better – the classic gum wall of the Vittoria’s I started on, or the blacked out menace of the Hutchinson Sector 28’s that I ran tubeless. 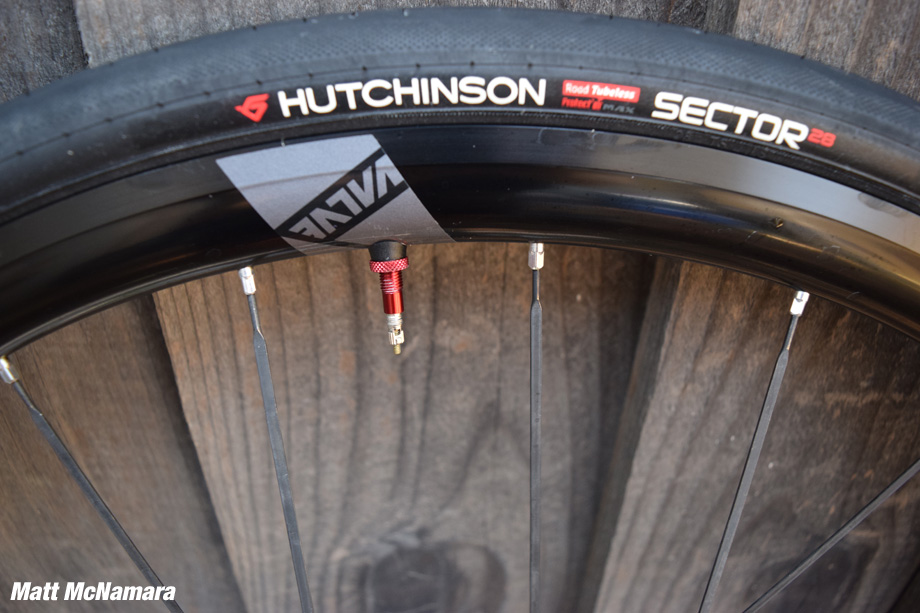 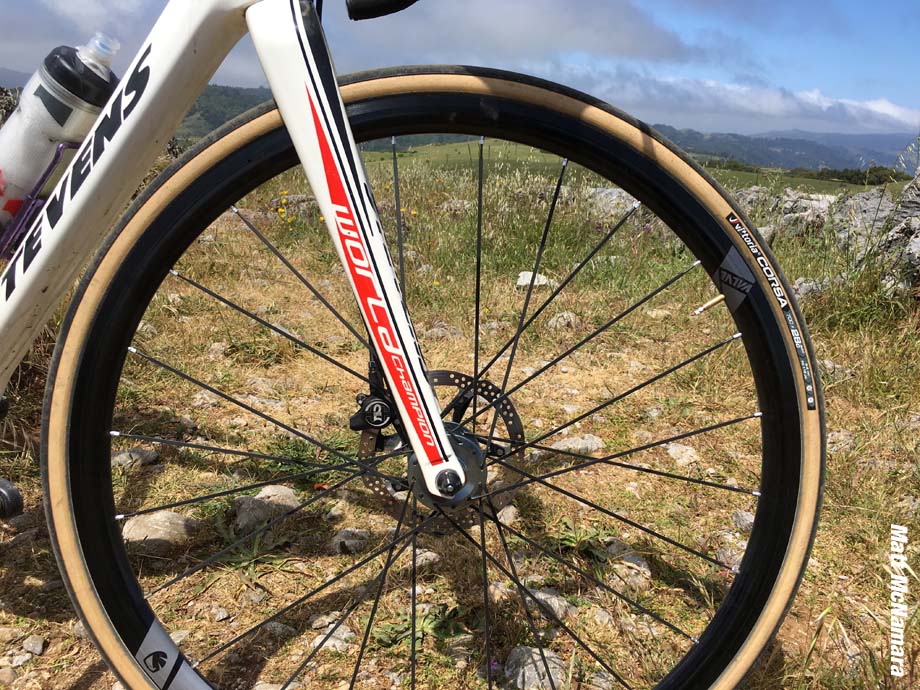 The Adventures
If American Classic was gonna let me test their new everything wheel, I was gonna try a little bit of everything. Straight outta the gate I’m headed to Sacramento with my team to join the Trek-Segafredo squad on a light spin a couple of days before the Tour of California starts. Dirk DeMol, John Degenkolb, Haimar Zubeldia, American Champion Greg Daniel and the rest are amiable and relaxed as we enjoyed some coffee and stories before the roll out. 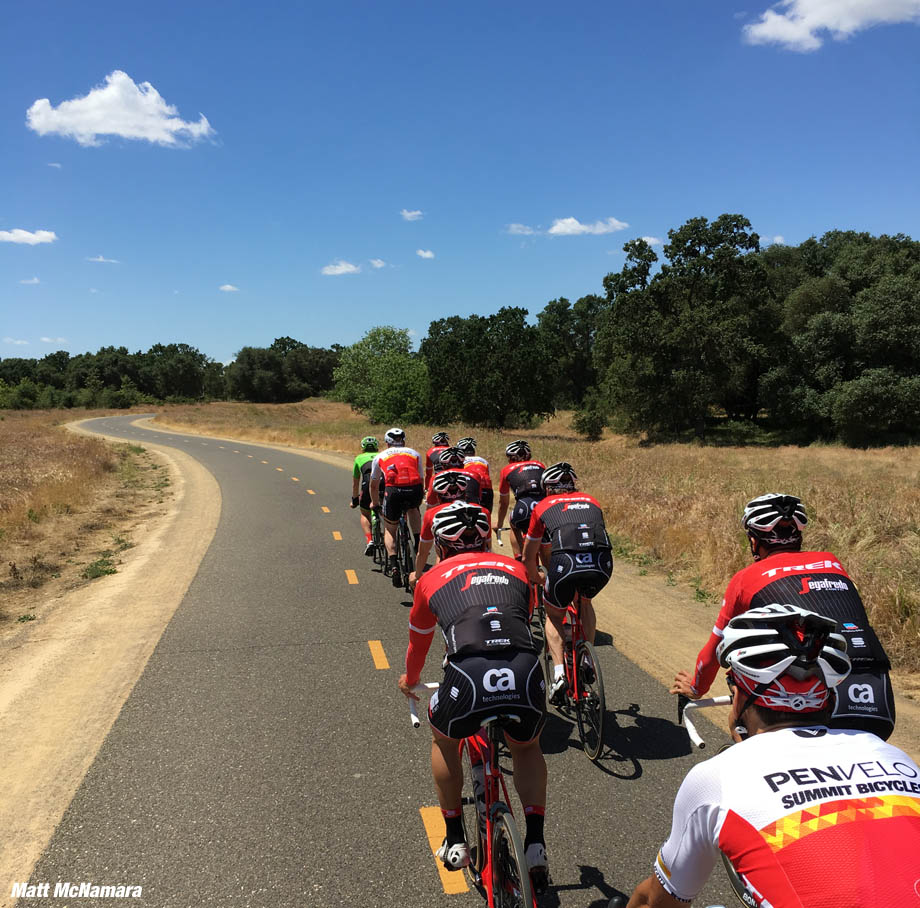 The Argent discs are wrapped with Vittoria G+ tires and latex tubes, 80 pounds in the rear, 75 up front as we head out with about 20 other dealers and guests. The bike path offers an unending series of turns, some alarmingly narrow while riding two abreast and trying not to embarrass myself around legit pros.

As speeds picked up the stability and quickness of the wheels began to shine. They never felt unsettled, changing direction with precision on each of those hundred times a ride I have to avoid a rock, a hole or another wheel. After an hour or so, most of the guests turned back, but a few of us continued with the team.

The riders loosened up and the speeds picked up as the remaining six of us got what one rider called “the thrill of a lifetime” as we started clicking off turns in tight formation and pretty soon it was just like any regular group ride you’ve done, albeit with guys who are so much smoother and stronger that the meaning of “pro” really comes home to roost.

Spinning the Argents through the turns within inches of real professionals gave an immediate feeling of stability and control when paired with a good disc brake. The wheel changes direction with ease, fluidly swapping side to side with nary a skitter or wobble.

Often times we would enter a corner at a good clip only to find sand at the apex; and the wheels always did exactly what I asked, darting quickly inside or floating that extra couple of degrees before initiating the turn. Unflappable. 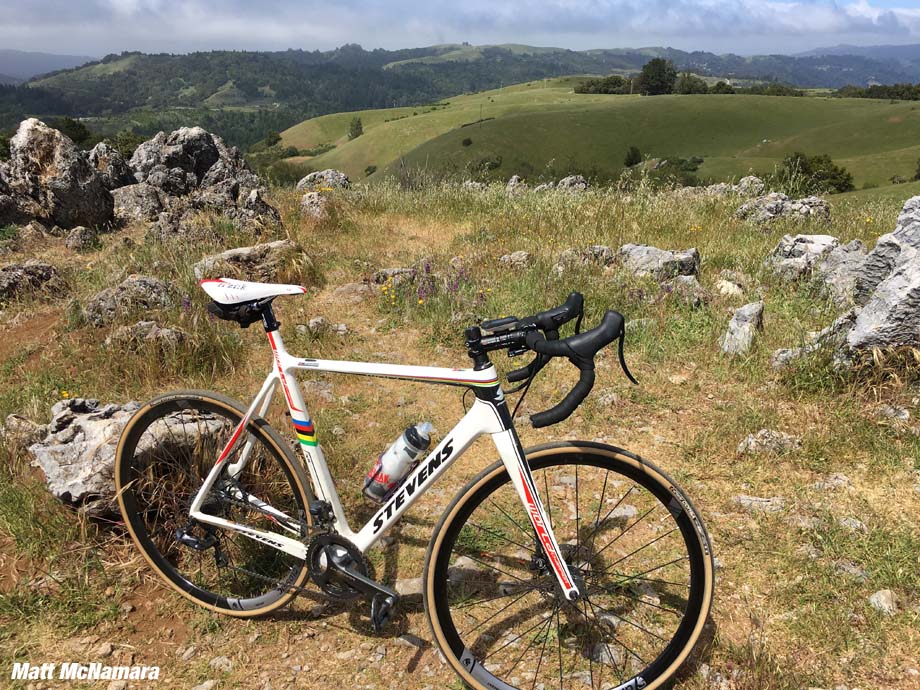 The next weekend I was off on a 5,000 foot, 40 mile mixed terrain ride with some insanely strong guys, the bike still sporting the open tubulars as we climbed from pavement to dirt, then found some insanely slippery rock strewn trails that had me dropping pressure to 60psi up front and 65 pounds in the rear just to keep from slipping. 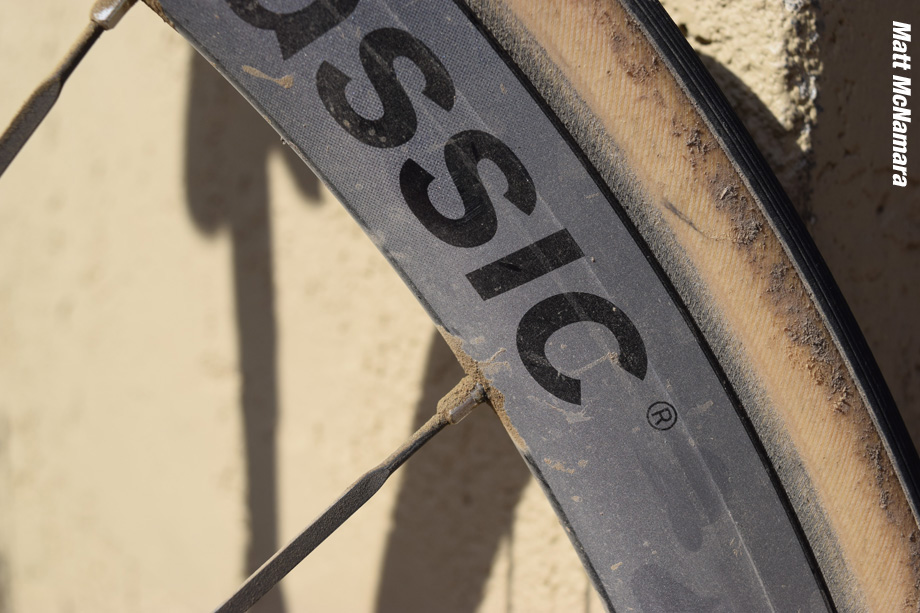 Shortly after that ride it was time to swap over to a tubeless set up that most riders are likely to choose. While I freely admit to soliciting the help of far superior mechanics like Terry and Chris at The Bicycle Outfitter, the swap was surprisingly easy and only took a few minutes, including the 50ml of sealant. The biggest challenge was seating the bead of the Hutchinson tires, and I once again deferred to the experience and on-site compressor of my local shop for the initial inflate, although there are several after-market options on offer for the home mechanic as well. 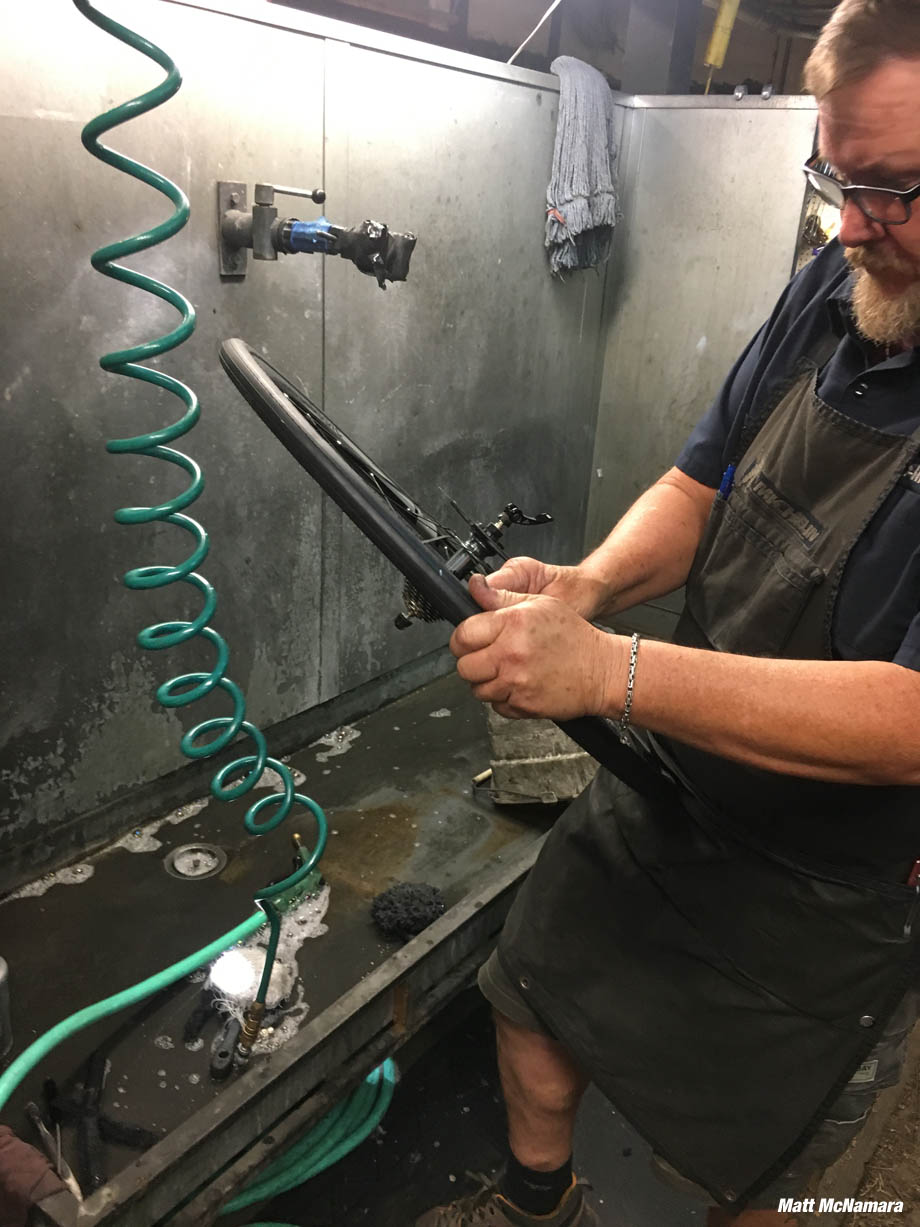 Now that I had a cool new set of Hutchinson Sector 28’s on, I headed out to play at Fremont Older Regional Park and Stevens Canyon, the local oasis of single track in an otherwise barren south bay. The trails offer a chance to see how the wheels like mixed terrain, which runs from loose sand to hard dirt, wide open to rough and narrow. On a particularly rough and fast descent I did manage to clip a large rock at speed which knocked the rear wheel out of true, but a few turns of the spoke wrench at home had the wheel quickly back in line and ready for whatever came next. 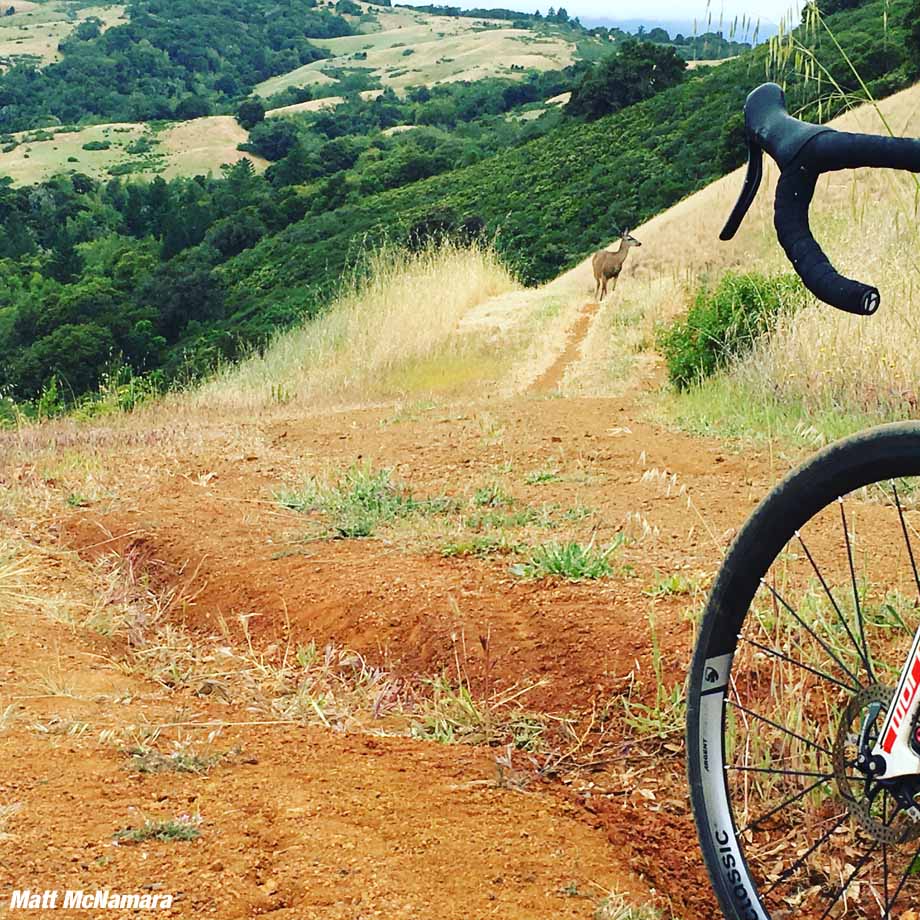 The Hutchinsons were much stiffer than the Vittorias, made to withstand harsher conditions thanks to their heavier sidewall and dual compound design. There is a fairly high weight penalty with the Hutchinson’s too, they weigh in about 50g heavier than the Vittoria Corsa G+ at 295g and 240g respectively. Tougher and heavier also leads to higher rolling resistance, though to be fair most any tire will roll slower than the G+, which only requires 12.2W at 120psi to spin along at 18mph according to BicycleRollingResistance.com, a website that measures such things. While there are faster rolling tubeless tires out there, the Sector 28’s have yet to be tested, in the World of mixed terrain and gravel riding, the Sector 28’s are the top of the performance heap! I was pleasantly surprised at their suppleness and smooth ride while ripping around the local Saturday fast ride and rank them a great overall choice. 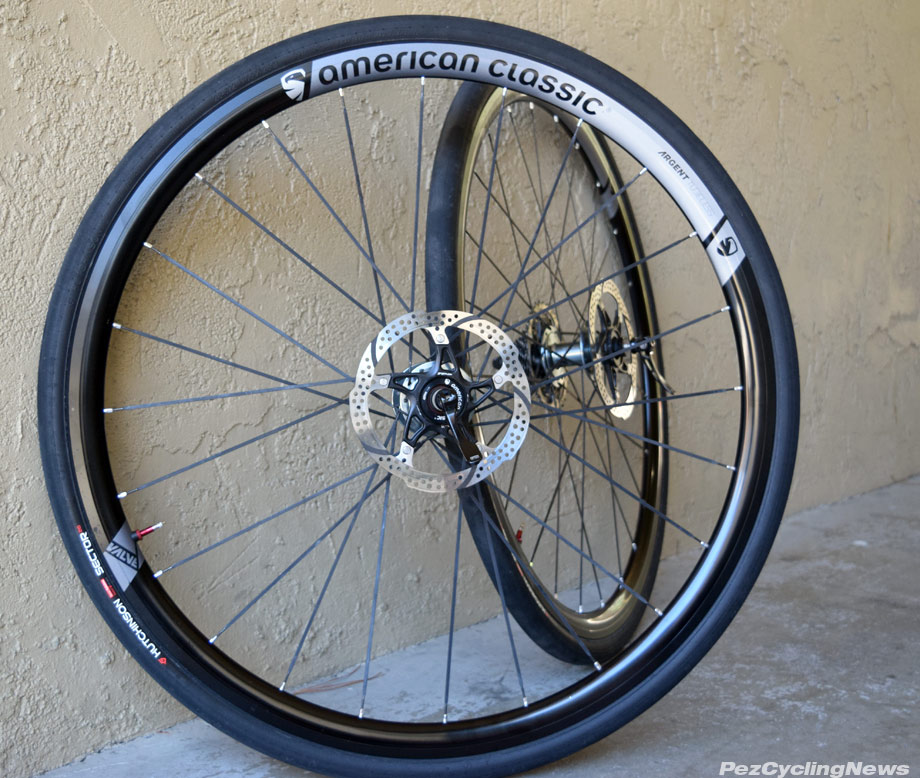 The Verdict
The American Classic Argent Tubeless disc compatible wheels cover nearly every niche of the riding world with impressive performance across a spectrum of terrain. Light weight and quick handling combine to lessen the impact of the slightly heavier disc brake set up such that in all but the stiffest cross wind you’ll never notice the added weight. The wheels are nimble and quick, turning on a dime and offering the kind of positive feedback into and out of corners at speed that inspires confidence. Off road the wheels were unflappable, taking roots and rocks, slips and slides in stride. Their ease of serviceability and myriad of set up options add to the allure and overall value of these wheels, the argent disc pairs are $950 and argent rim brake pairs are $899, value is perhaps the last best word to describe them. And don’t forget that the rim brake version PEZ reviewed here is also a nice option.