Warning; Pez asked American Classic for a set of clincher wheels to go with a few Superbikes we were building up from Seven, Serotta, Temple, Cyfac and Ridley. We gave em an exotica spec sheet that they would have to live up to and waited for them to wilt under the pressure…

“We’ve had your wheel set for a while. We were just waiting for you to catch up bike wise…” Poof, their wheels landed two days later, and about a month and a half ahead of the latest uberbike… 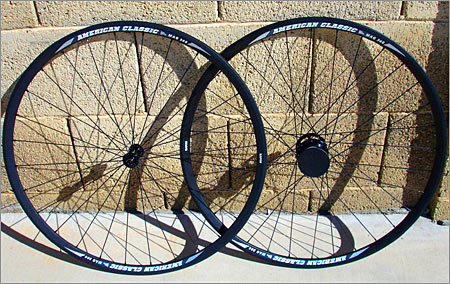 Click the thumb above for another plain old bike shot

American Classic has had a few sets of wheels roll though Pez… 420’s (twice), 350’s, Carbon tubies… We have had several sets to play on and have always keep a set around as one of the house wheel sets for our bike tests (lest we do like other folks and let odd wheel spec’s skew our perspective of a frame and fork). One thing has been very consistent. American Classics have held form as a “more substance and less bullshit” manufacturer each and every time we have had a Q and A session with them… I have never, ever, not one single time, had Bill or Ellen use a marketing term for a single part of a wheel. Not once. 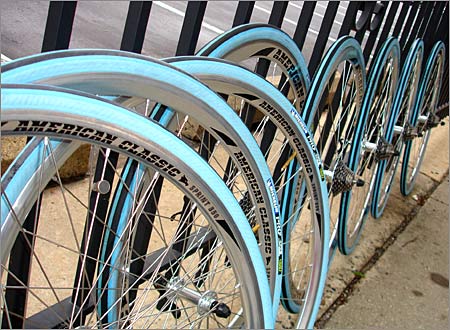 American Classics hoops at the US Pro Champs in Philly

It was with American Classic’s focus on substance rather than marketing in mind that I have decided not only to do a review, but to make up names for the features of their wheels…

This serves a couple of purposes. 1st, It will annoy the crap out of American Classic’s honcho and design meister Bill Shook. 2nd, It will poke fun at companies that try too hard to name stuff. 3RD, I am board stiff as it’s 113 degree’s outside which means I can’t go ride…

And it will put an emphasis on some of the things that you would take for granted when buying something from American Classic that would otherwise go unannounced. 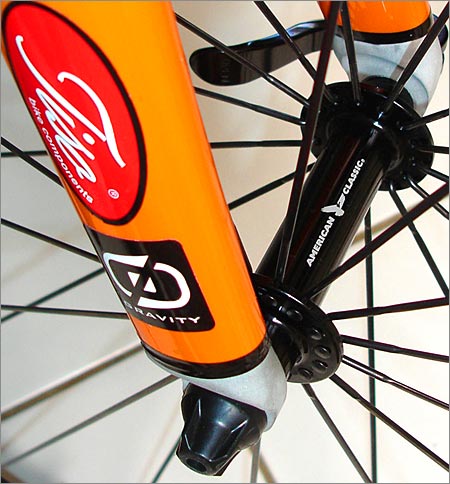 Now for starters, Bill refers to it in conversation as “the hub”.

Not “ The Micro” or “our 58 gram hub” or even “the new lighter hub”, like the guys at the other wheel companies refer to their stuff. Just “the hub”. Personally I am shocked at the term Micro. Not because it’s not a great name, but simply for the fact that it has a name at all… (The read road hub gets the whizzbang name of “rd”)

The front hub has had a few tweaks since last year; A larger diameter axel, better sealing screw in end caps, a flange tweak. All changes help make for a better load carrying and more durable Hub. Shaving a couple more grams off of the old hub, when it was already a weight weenie’s favorite part was just a bonus… So there’s the front Hub. Lighter stronger and longer lasting.

In marketing speak, given the added strength and reduced weight, Pez will rename this part the “Micromax 58, with O.S.E.D. Technology” (Over Sized, Extended Durability)…

The rear hub has also been tweaked and American classic worked overtime to draw as much shock and awe to this part as they could by giving it the super flashy title; “RD 205”. 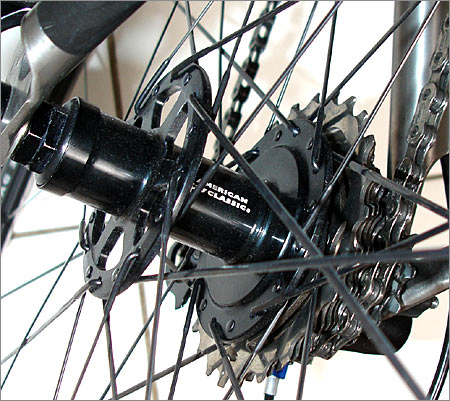 It drops to 205 grams (thus the name) and gets a larger (17mm) axel and has 6 large pawls (the thingy’s that move in to place when you apply pedal power. These pawls are also spaced further from the axel so that drive force is spread evenly and durability is maximized. The hub is designed to ensure that all pawls engage at the same time (some multiple-pawl hubs only engage a few of the pawls under power). The design is also meant to completely disengage when freewheeling.

The body of the Hub is forged aluminum which helps the unit stay at 205 grams with the standard bearings. I say “standard” for American Classic, but they are an upgraded 6803 C3 oversized set.

The shape change, increased structural strength, very good bearings and corrosion inhibitor and exceptional drive system would be great at 250 grams. At 205 it’s a great hub.

So the back hub we will rename “The Micromax 205” featuring “O.S.E.D. Technology” and the “FreeForce Drive System”.

Bearing it all
Now no super-wheel would be complete without an upgraded Ceramic bearing set. 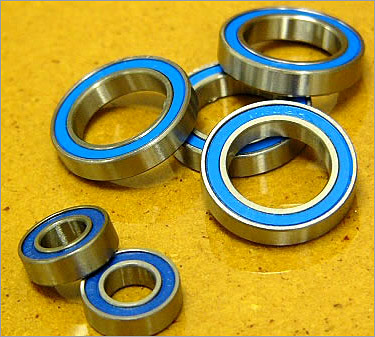 American Classic have upgraded their standard bearings both front and rear anyhoo, but the ceramic babies were included to finish off a top of the heap wheel spec, So booyaa. We get the lower rolling resistance, higher dollar kit… Ceramic bearings just roll a bit easier (shaving @ 5 watts at 25mph) as they create slightly less friction under load than standard stainless bearings…

Next out from center is another available upgrade.

These start and end as standard spokes, but get an oval middle. But, by far their best feature is the strength to weight… These are incredibly strong spokes and several folks (Reynolds, Zipp, etc…) have gone this route as the best spoke option available. They are not inexpensive but they build the best wheel available for a given spoke count.

They’re showing…
At the end of the spoke lies one of my favorite boring American Classic features. Regular old exposed spoke nipples… 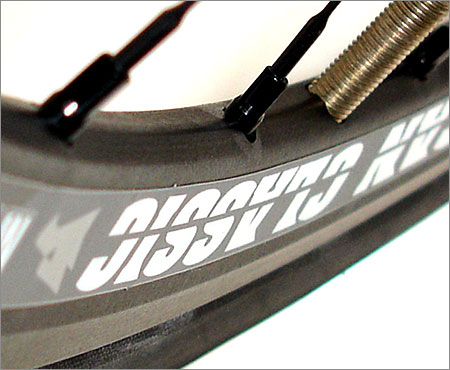 No peeling off tires and rim strips to get to the spoke… No big deal to replace anything for any half way descent shop. Just Spoke nipples that mate well to the rim, hold the load well and mate well with the rim shape from the inside. We won’t call this a damn thing except good.

We won’t call this a damn thing except good.

Simply put, American classic have done a whole lot of work to come up with a metal matrix that can be formed into a rim and weigh in at 325 measly grams.

Now making something light is easy. Having the darn thing stay in one piece for a few thousand miles is something else entirely. To get there, American Classic went with Magnesium, as it is about a third lighter than Aluminum while remaining strong.

There are a few tricks to working with Magnesium. One is avoiding igniting it and starting a fire that will burn through the work bench, the shop floor the foundation and half way to China (when ignited, it burns at @4000 degrees…). The second is using the right mixture of metals and coating it properly so that it doesn’t rust so fast that you can actually see it change color in the first 50 feet after hitting a puddle…

The metal mix isn’t for public release and the coating process is proprietary, so this portion of our story is pretty short… But leave it to say that the matte ceramic(y) finish looks pretty cool and it functions like it should. 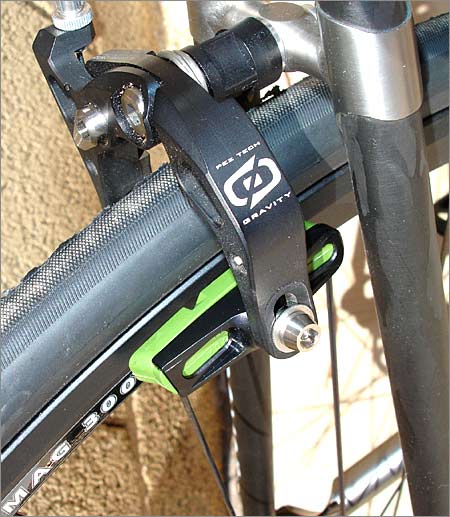 Interestingly enough, you’ll wear through the coating in short order (75 miles had a noticeable effect). That will leave the raw metal exposed, and that’s where a bit of special care with these wheels comes in.

American Classic has been testing these for quite a while and they are located in Florida, where a combination of humidity and a coast on both sides of the state mean that rust will form in your underwear if you walk too slow… They have had a test set lasting with just basic wipe-downs (wheels, not undies) and have had no problems.

Rolling Rock?
Magnesium’s special treatment aside, these are a very nice wheel set if you are looking for a snappy set of clinchers with very low weight. The set rolling out at 1223 grams is way light and, as high end clinchers go, the performance benefits of a rim weight rivaling carbon tubulars is extremely good and absolutely noticeable when compared even to most “light weight” clinchers.

The wheels are not as laterally stiff as some of the stiffest wheels around. But they do not suffer much from wind up and I had to do some really stupid things and pedal with a much exaggerated (poor) stroke while standing to get them to flex period. They are also pretty comfortable which has been the case with American Classics 350’s and 420’s in past tests. Comparing them to something like a set of Ksyriums would have you notice the side flex a bit, but also notice the comfort and definitely notice the better acceleration that comes from pulling ѕ of a pound out of your wheels…

These wheels run $995 in standard form. That’s not cheap, but is in line with other high end wheels and you won’t get into the 1223 gram area unless you hunt down a set of Spada’s (shipping and customs will not be pleasant…). American Classic are working to tie down a better bearing supplier, so no cost on that yet, but the Sapim spokes will go 149.99 better and Ti QR’s another $40.

Go see the folks at AmClassic.com for more details or give em a call. You can also buy em at Wise Cycle buys or Glory Cycles.com.