Sometimes things just wind up working out, and when boxes from Campy, Modolo, U.S.E. / Ibex sports, American Classic and Argon 18 all popped up within a few days of each other, it all added up to basically overwhelm me. Two words sum up this test bike…

Several months ago, I was cruising through Interbike and noticed the frames at Argon 18 were worth mention as a little better than the standard stuff at the show. Since then we had spoken a few times to the folks up north (Montreal) and just in time for the warm weather we bagged Argon18’s top of the range all Carbon frame, the Platinum.

As you will read and can see, the frame, in and of itself would have been enough (kinda like Jennifer Garner in that the bike would be nice dressed in anything). But then the Bits and pieces started to turn up and it became pretty obvious that this thing was gonna make everyone slobber… 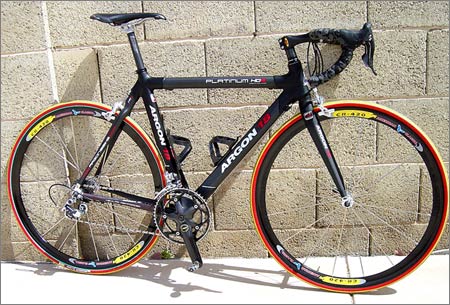 The Whole Picture is extremely good looking on first inspection with a very nice Carbon matte finish that is too sexy for words. The Logos are nice and conservative and don’t rob the frame of its good looks for the sake of marketing. Right out of the box I got a look at the frame and knew that the seat stays, in a familiar pattern, would ride well. The multiple curve design works well to soak up the bumps on other bikes. 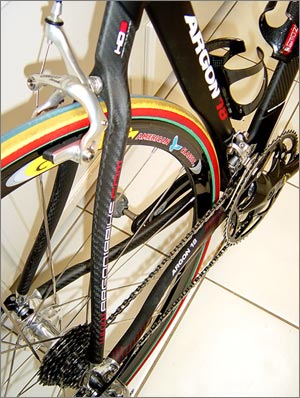 What I was pleased to see is that for 2003 they left the Bottom Bracket area and the entire Seat Tube as a very stiff single unit with plenty of beef where it was needed. Not bad considering they choped a quarter pound out of the weight from 2002. 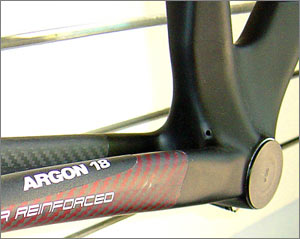 The Chain stays are pretty substantial and don’t taper as near the drop outs but actually get bigger! (and remain stiff). They are also pretty short, and the tire fits in snug to the aero form of the Seat tube. The drive side is also Kevlar wrapped, but I would imagine the design being short and stout has more to do with providing stability and stiffness than the Kevlar wrap.

The Front Fork reminds me a bit of the LOOK HSC-4 all Carbon. It has the goods with a carbon steering tube and a metal reinforcement to protect it at the crown in an integrated headset set up.

The Main Triangle is slick. Like I said, the seat tube is the backbone for the stiffness. The down and top tubes are substantial, as is the head tube / lug. Their web site illustrates very well that the direction of the fibers, thickness and shape of the tubing are all specifically designed to try and pull off what everyone promises and few deliver, Lateral Stiffness and Vertical compliance. Argon 18 calls it the Horizontal Dual System or HDS and it involves two distinctly different areas; A Power Zone ( the Chain stays, lower section of the seat tube / BB area, a substantial Down tube and the Head tube) where the fibers are oriented for rigidity and stiffness. And a Comfort Zone (the multi-curved seat stays, the upper section of the seat tube and compliant but substantial top tube) where the fibers are aligned to be more compliant and flexible.

OK, So all that aside, How’s the damn thing work?

Handling wise, this frame was great, of course in smaller sizes, most bikes with pretty standard Geometry handle well if they are properly aligned and built well. The Argon was both.

As far as aesthetics go, this thing is a show stopper, although anyone’s Carbon bike set up with a kit like this will draw crowd. The matte finish was a concern to me because I hate to clean things and some matte finishes are a bitch to get clean… But after running this thing over a cobbled, rocky, muddy, torn up road (pissing moaning and cursing the whole way) I took it home and cleaned it up with no more effort and using no other items than I would have used on any of the glossy finish bikes I have. 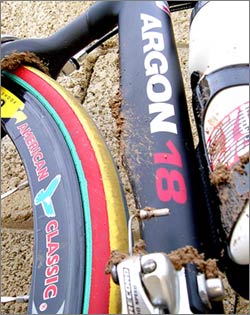 I also learned that over the rough stuff, this damn thing is extremely comfortable. It soaked up everything that my curved seat stay steel bike and The C-40 would have soaked up and maybe a little more. And that was with a Selle Italia SLR Gel Flow Trans Am (I believe SLR stands for Sorely Lacking Relief…). I much prefer the Selle Italia Prolink, as it rides like a pillow compared to the SLR, and once I swapped it out for the next few rides, I was basically in heaven. The Platinum is as smooth as anything on the road.

The frame tips the scales at, the 2.5 pound mark. Given its substantial Seat and head tube, that was lighter than I expected. But I didn’t need a scale to tell me this thing was a featherweight. What did surprise me was the stiffness. I ride a Custom Steel, a C-40 and Pinarello Prince as my day to day rigs, so I have a good Idea what to look for when it comes to both Comfort and stiffness. This Bike is every bit as comfortable as the C-40, which wasn’t a surprise. But it also had the gas pedal that usually comes with big tube (jackhammer) Aluminum. Frankly that shocked the crap out of me.

The Living Dead
Some of us have ridden carbon bikes that were best described as feeling “dead”, which was the result of doing a good job of soaking up vibration, but also of soaking up power. Well this one’s just “dead fast”. Yes the wheels are stiff and very light, and the Cranks are top notch, but they are the same wheels and cranks I run on all tests, so it is an apples to apples comparison with the only new thing being the Modolo Bars and stem, and they were absolutely great to ride (see the review). 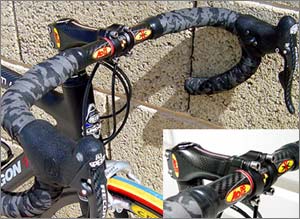 Having ridden what are widely regarded as the best frames available in Steel, Ti, Aluminum and Carbon and have a few combinations of each material as well. I know that each has it’s own special characteristics. That said, I believe that some manufacturers are starting to understand more about how to lay up Carbon fiber (by manipulating the fiber direction and type etc…) so that it will do very different things in different situations and do them very well (within the same structure!). With that in mind, it’s getting hard to look past Carbon when it is really well done (which is why you are seeing Carbon from people that were not known as Carbon frame builders until recently). Honestly, the Argon18 is done well enough to make it a stand out bike even among better known brands. An example would be that I think the Argon’s overall ride qualities are on par or better than that of De Rosa’s new-ish King, while being lighter and the better part of a thousand bucks cheaper…

In its “as tested” build, this bike will stand up to any competition in the looks department, but it’s the performance that stands out. You may have to search a little, but get you’re a$$ on one of these if you are looking for a great all around bike and would like to save some serious cash. As for this one, you can bet it will stay with us for “further review” cause we ain’t givin it up!

More Scoop
Argon 18’s site is at www.argon18bike.com. You can also contact Argon’s US agent Ryan Belanger for your nearest US retailer at (603) 321-6841or Alternative Bike at [email protected]

Special thanks to American Classic (www.amclassic.com) for the wheels,
Arundel for the cages(www.arundelbike.com),
Campagnolo(www.campagnolousa.com) for the gruppo,
Selle Italia for the booty holder, www.selleitalia.com
Ibex sports(Ibexsports.com) for the Bars stem and seat post.
And Domenics Cycling Imports (domenicscycling.com) with a quick BB swap out!