Like any self-respecting road cyclist, I’ve owned a large plastic bin’s worth of floor pumps over the years.  Most have been trashed as the seals blew, hoses split, or some other seemingly fixable mechanical combined with my own malaise and admittedly easy access to new floor pumps made replacing the pump easier than fixing it.  Enter the Arundel Floor Pump 1. 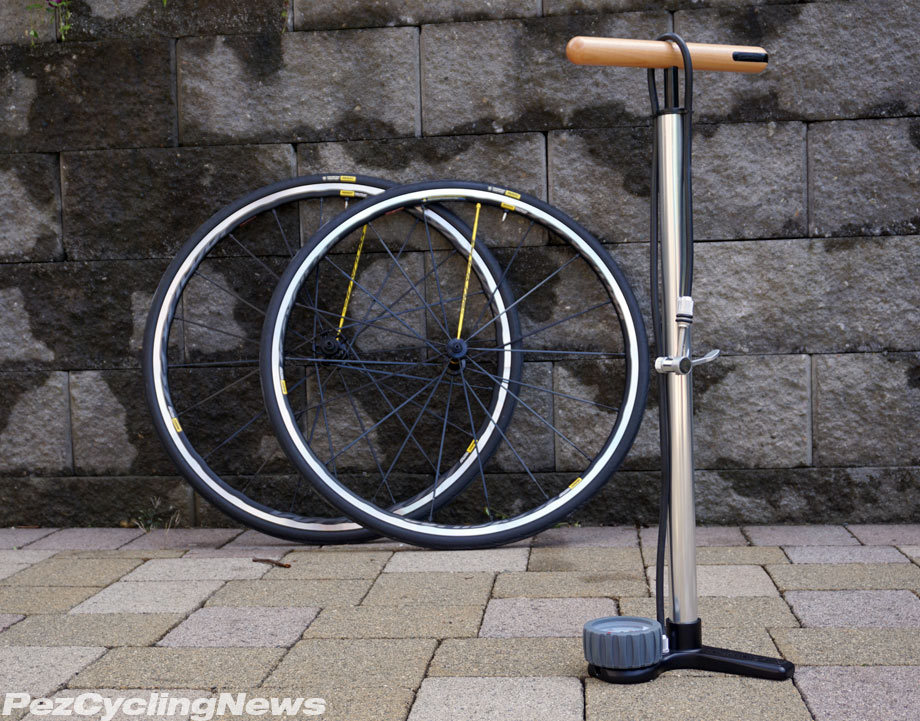 Cutting to the chase – this could be the first pump I’ve ever owned that:

a) is so easy to use that I actually take the time to replace any of the replaceable parts that may need replacing over the next few years.
b) is cheap enough that I’d actually buy one at retail.
c) could very well last longer than any other pump I’ve owned.

And that’s a big story, in my workshop at least.

We’ve been working with and admiring the gear from Arundel for a few years now – their Gecko bar tape is becoming the stuff of legend on my block – where I wrapped the local kids’ playground swing-a-ma-jig handle in the stuff two summers ago, and it’s still going strong. 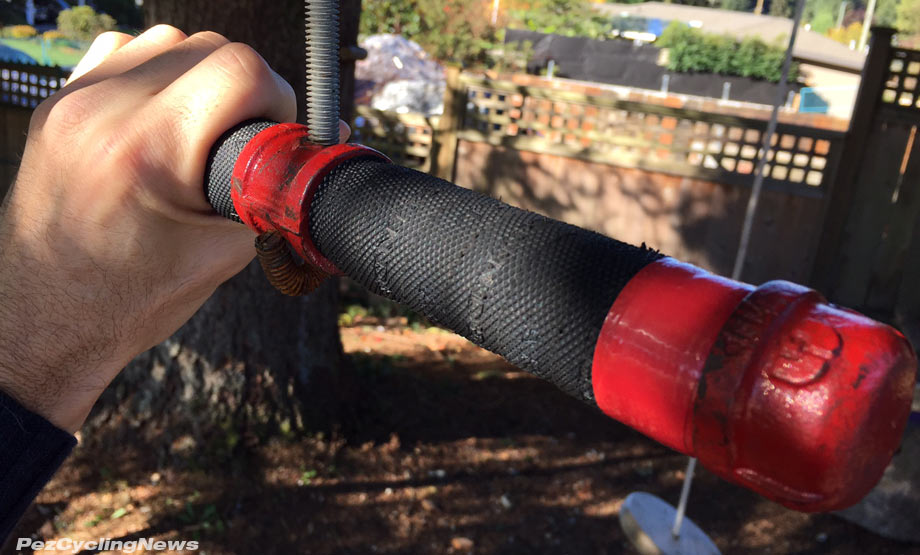 But mostly I like and admire these guys because they’re a small company, staffed by solid people who love their craft, and really believe in making high quality gear – often investing more in production quality than a business school analyst would like.

I also like that getting a product right means more to them than rushing it to market – for example – the Arundel Floor Pump 1 has been in development for several years – this being the third generation of prototypes before they felt it was ready to boldly go and fly the might Arundel name with pride. 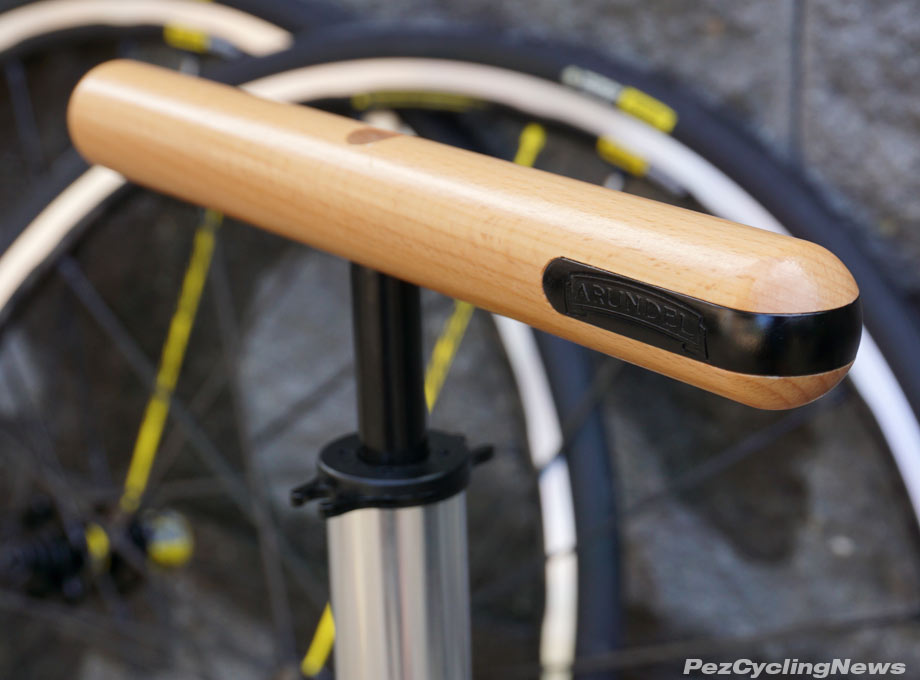 And what’s arrived in select shops – and available for purchase online at Arundel.com, is a highly functioning, beautifully crafted floor pump that is amazingly affordable at US$99.  Yes – that is not a typo.

But in market where some great pumps already exist, and shops are already loaded up with options, the only choice is to be sure you get it right – and that’s what they’ve done.

Starting at the top – that is a real wood handle. It feels great in the hand, and doesn’t flex like some plastic handle do.  This is what quality feels like. 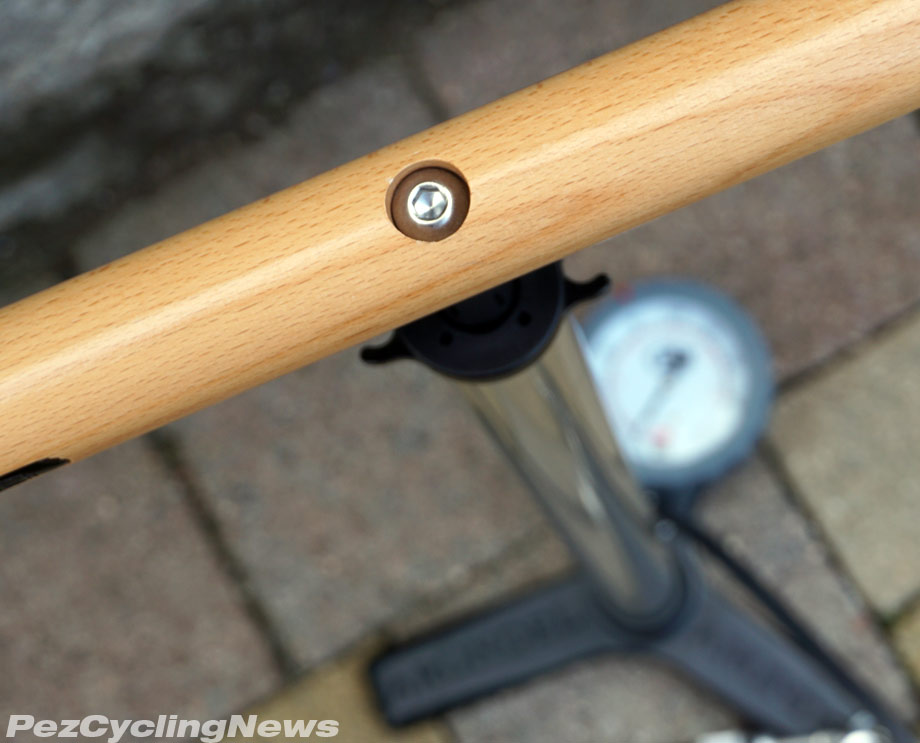 The base is made of forged 6061 T6 aluminum alloy (same as DuraAce crank arms) – it’s expensive to produce, but is made to last, and simply won’t bend or crack. 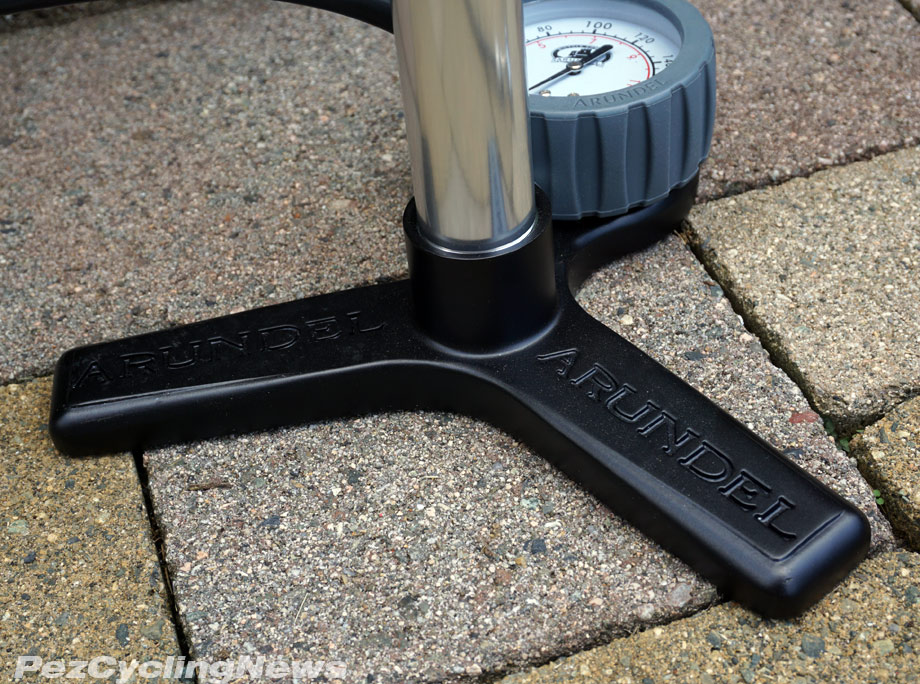 Another thing about the base that proves Arundel’s commitment to quality, is the shape.  The three-footed star shaped base measures about 9 inches across, and is built to maximize stability when in use.  But this also means that shipping requires a certain sized box that is larger and more expensive to ship than narrow shaped bases – or even pumps that ship with the bases removed.

Arundel ships their floor pumps as fully assembled units – so you don’t have to mess around with assembly – or risk messing it up when you put it together.  But that’s what you gotta do when you want your customers to have the best possible experience with your product.  This costs a bit more, but Arundel thinks it’s worth it.  And I do too. 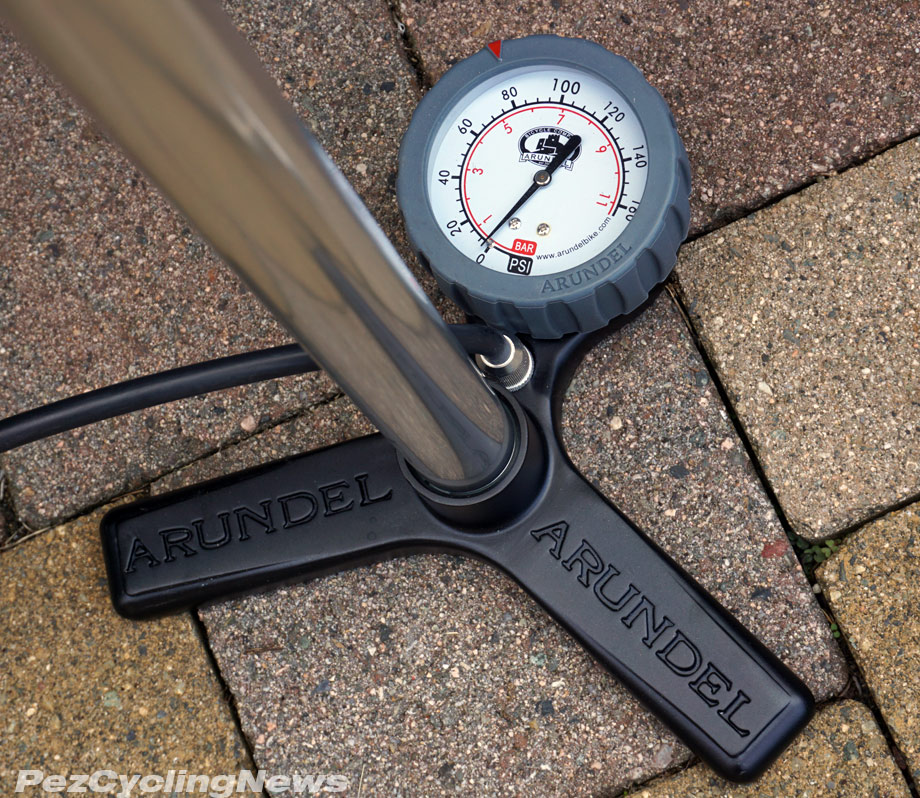 The pressure gauge dial is  a nice and large three inches diameter so most everyone can read it – especially guys like me (ie: of a certain age…).  Many brands these days go with less costly 2 – 2.5 inch gauges, which cost less because they so produced in much greater quantities than 3 inch gauges. 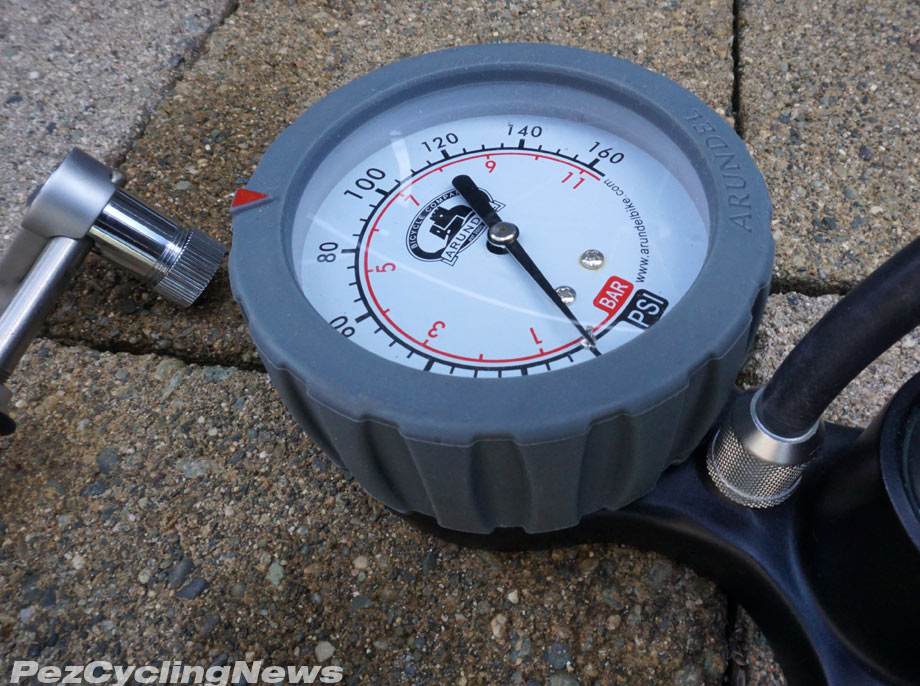 The gauge screen is plastic because it’s more durable than glass, and costs less.  The rubber gray cover around the outside of the dial is there for both protection, and also to mark off your desired inflation pressure by simply twisting it so that the red triangle marks off how much pressure you want.

The cylinder is made from a seamless aluminum tube. You get one of these by taking a precision-made aluminum tube – the internal bore has to be perfectly straight – and pulling a mandrill through the tube with very high force.

Final assembly is done in Fort Worth at Arundel HQ, to ensure the highest quality fromArundel –  they do it their way, and they do it right. 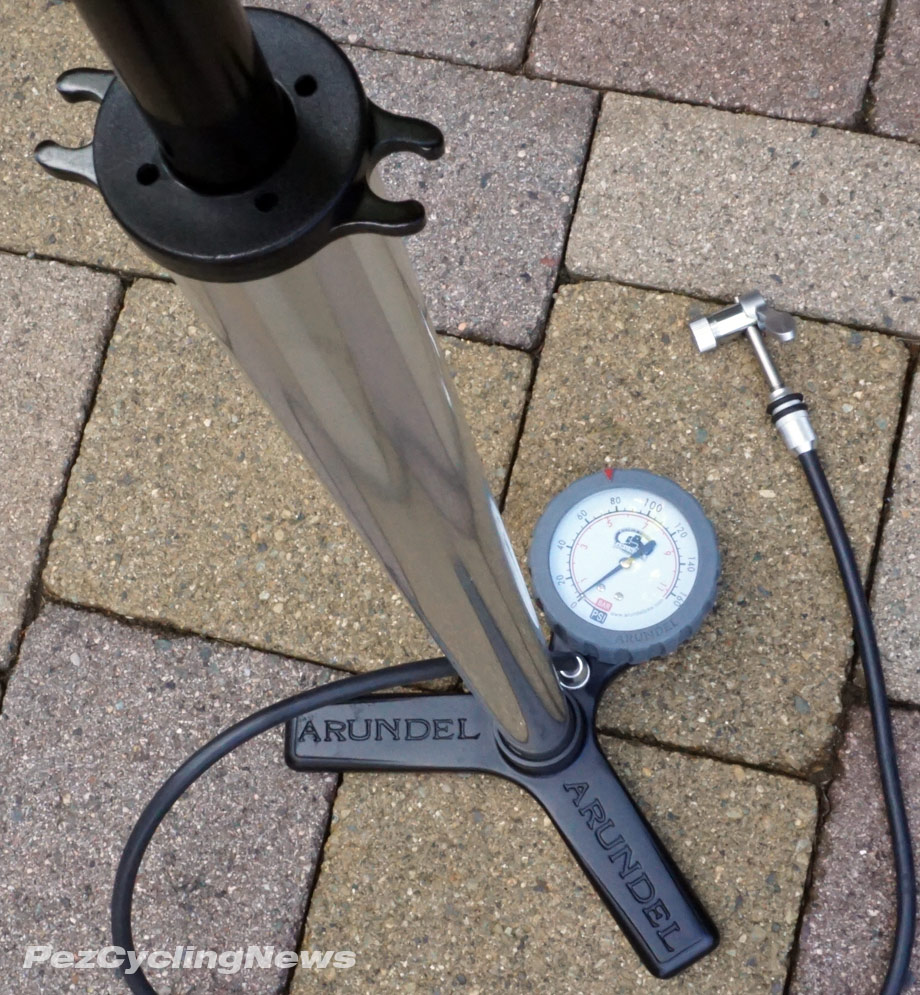 Many cylinder lengths are determined based on shipping costs, much like choosing a smaller profile base that can save money on shipping costs. But no such shortcuts here because Arundel build stuff for bike fanatics who prefer better quality gear.

But the Pump Head – is my favorite part of this tool.  Mine came with the “Hansel” thumb-locking version.  Also available is the Gretel that threads onto the valve core, and the Woodsman version as a push on style.

The Hansel’s canted lever allows super easy securing of the head to the tire’s valve stem – simply by pinching it closed with one hand.  Every other pump I have uses a clumsy and hit & miss securing system that requires two hands to operate, often in a counter intuitive manner – and none of them secure as well as Arundel’s design. 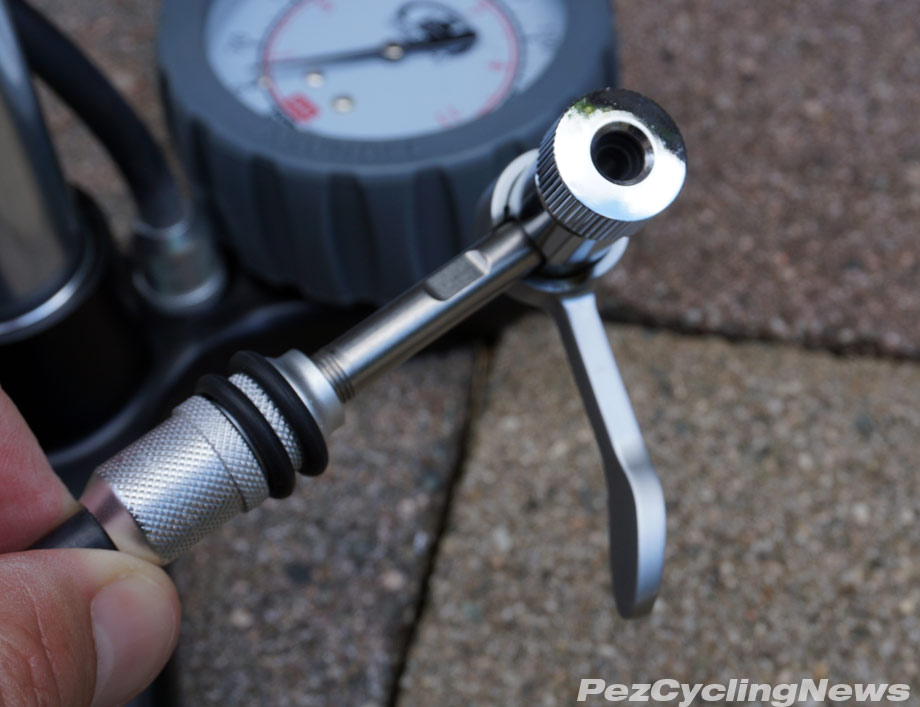 Another cool part of this design is that the thumb-lock section of the pump head unscrews to reveal a thread-on section for Schrader valves. 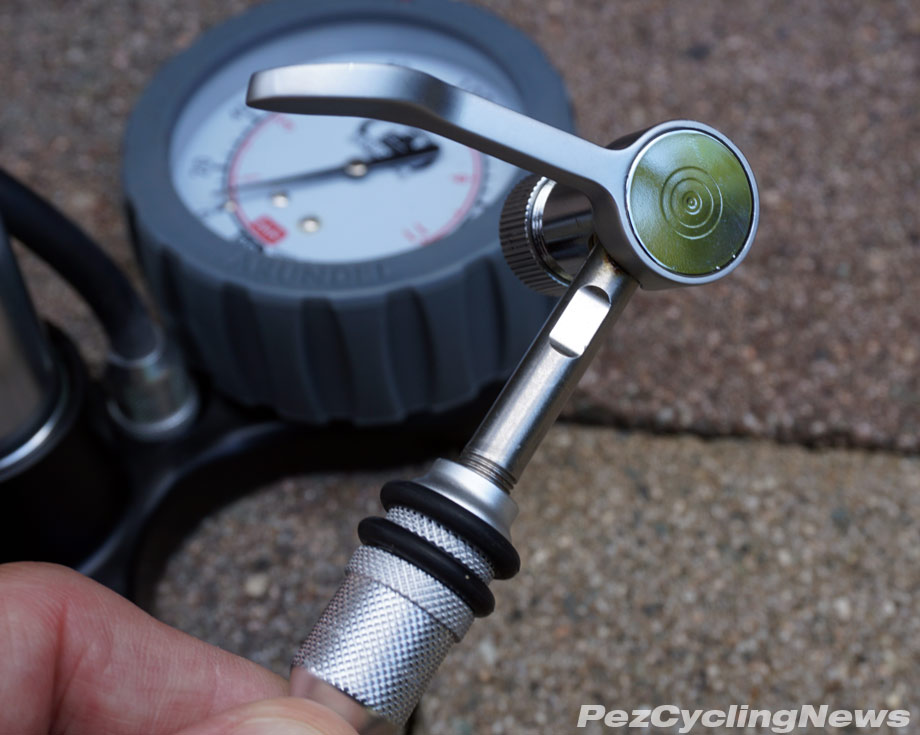 And here’s a fact I only just learned while talking with the guys who make the Arundel Floor Pump 1 – when you release the valve, the air squirt (psssst!) comes from air releasing from inside the pump hose – NOT air escaping from the tire.

The valve head is steel & aluminum, and chrome plated steel to prevent rust and oxidization, and ALL parts are replaceable. 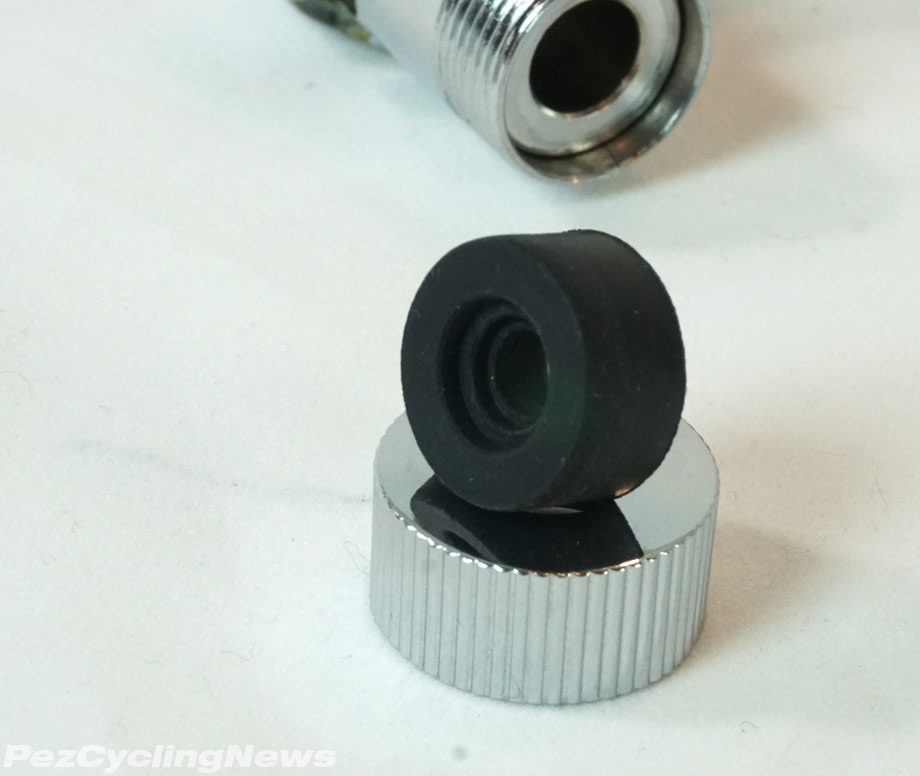 The PUMP head gromit  is detailed with graduated steps to form a better seal around the valve stem, and reduce wear of the gromit over time. 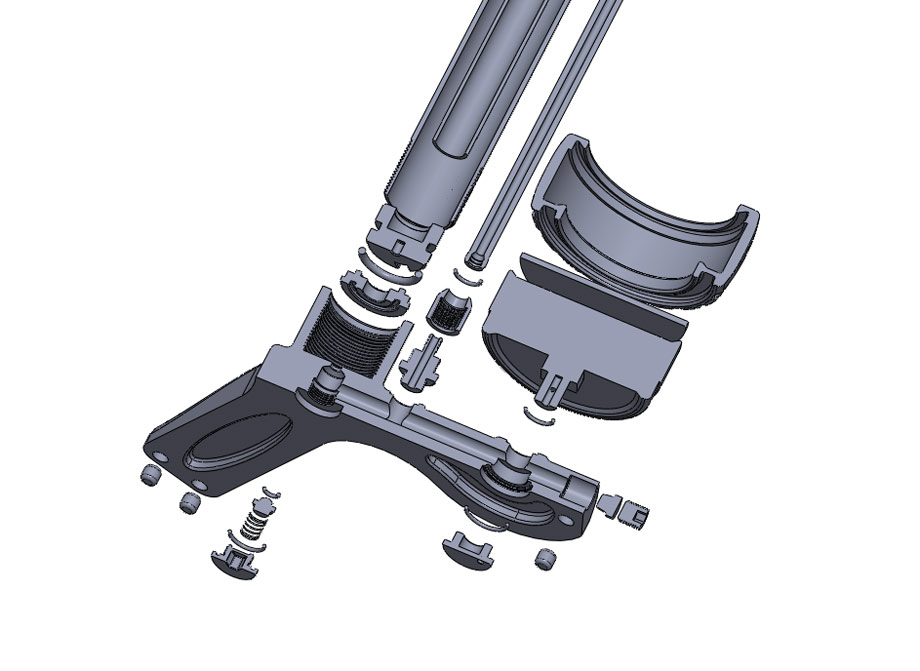 Overall I love this Arundel Floor Pump – it looks like it belongs in the work shop of any self respecting road cyclist and Gent. Or Lady for that matter.  The quality and workmanship are plain to see, and right up there with the kind of tools I want to use on my gear.  The price is amazing – $99!