Bergamo clothing is just that: BERGAMO.

It isn’t an Italian label slapped on things made (and designed) way further east than Brinisi… When Bergamo say they design and manufacture something, that means that product goes from the drawing board to the sewing table and into a package before it ever leaves Castano Primo (just outside Milan). Not only is it “Made in Italy”, but fully 60% of the fabrics are also made in house!

Don’t get me wrong, there are some great products with an Italian design that come over surrounded by Fortune Cookies and noodles not called “Pasta”, but when it comes to clothing I am pretty particular. When Bergamo said a little kit was on the way, I was hoping for something a little different than the over cooked patterns and undercooked Chamois that I have grown used to. I was really happy, when I opened the package, to find something that just made me smile… 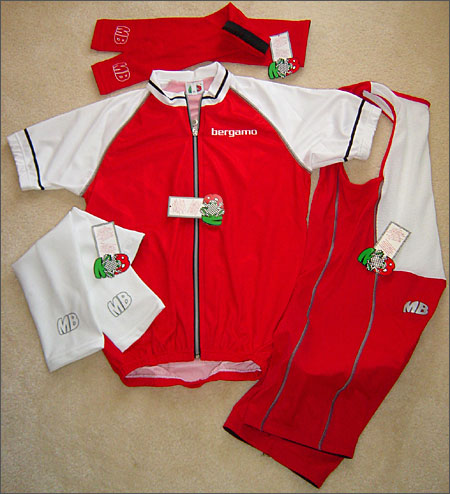 Sure, nobody will miss me, as the kit is in a red that would make a Ferrari jealous, but the design from Bergamo makes the loudest color on the planet seem a bit classical… It’s something that I like about this line more so than many others who make colors that are blander than this seem far more garish…

I guess design ability is what develops when you have been making bike gear for a couple decades. The fact that Marcello Bergamo rode around for 10 years as a (winning) Pro, back in the days of Black Shorts and single color jersey’s with one big sponsor, might have helped him keep things a little more tame, while still making them stand out. I was honestly surprised to hear he was a bike racer, as looking at some of the hairstyles and clothing on some of today’s pros has me praying that very few get into the garment industry (George is making some pretty nice kit though…). But Bergamo gets it right. One of my favorite Team kits was the Liquigas outfit of a couple of years ago. I remembered those, and rode these 15 minutes after the package arrived…

This kit is made with detail that reminds me a lot of Assos gear, but at quite a few dollars less. 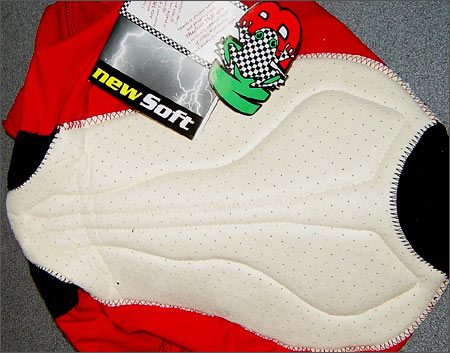 The Chamois has an antibacterial top (as does every short these days). The padding and fabric are comfortable, and the stitching is non-existent (its there, and sturdy, but you don’t feel anything). I also like the multiple densities of padding. It makes the SLR saddle on the new test bike bearable… The coverage up front is good as well. Some folks come up a little short there, trying to save fabric, but allowing for the peepee to do the peek-a-boo… Not so with these. 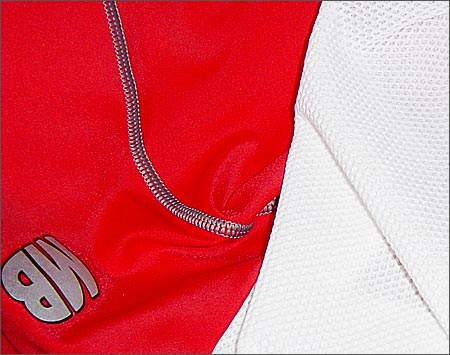 The fabric for the shorts supports well. It is a 220g Lyrca that gives good muscle support, but remains very soft to the touch. The back is all mesh for breath ability, although it is a little thicker mesh than some. The leg grippers are an industry standard type, and hold without feeling rubbery or can be worn turned-out if that is your style. The Stitching is all flat seem, and is done extremely well.

The shorts ring in at $119 dollars and that’s not bad given that lots of other shorts with the same features come in any place from here to over $200 bucks.

Arm and Knee covers
The warmers are made from the same type fabric that lots of companies provide. It is slightly fuzzy on the inside and smooth outside. They call it “Super Roubaix”, and it is as good as anything available. I like the gripper areas, as they are snug, but flexible, and the logos are nice without being over done. I also like that they come in a white (along with lots of other colors). 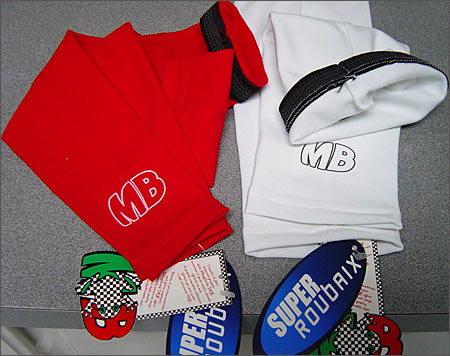 Technical Jersey
The Jersey is very comfortable. It’s made of a “Righetta” Fabric that is a double knit for softness and to get sweat away from the body. It is cut in a way that is meant to be bent over riding a bike without any fuss… 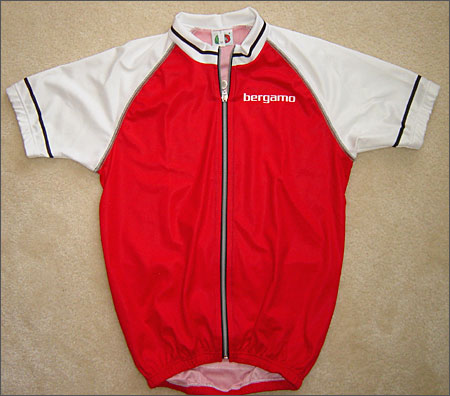 Probably the nicest feature (other than the super classical looks) is the combination of a full zip design and the inclusion of a great quality zipper. This is almost a revelation, as so many companies try and save a little money on the only mechanical part on the jersey. This thing zips up when you pull up, and zips down when you pull down, and does so with out stopping 5 times along the way… 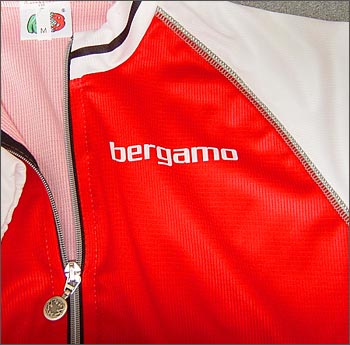 I also like the quality inside this Jersey, as the stitching is done well and finished as a top line piece of Kit should be. You can also notice another shot of the zipper. I know it’s not something that gets folks excited, but, if you’re a tech weenie like me, you’re into Zippers… 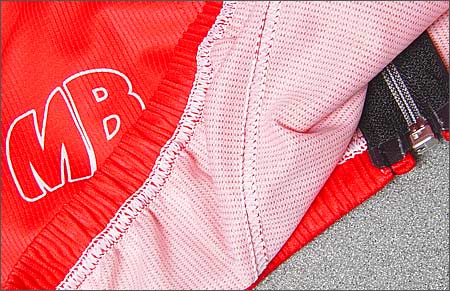 So That’s It.
All in all, this is good stuff. It is made very well, and priced fairly (in comparison to other Comparable Cycle clothing).

I usually ride around in stuff that would make a pimp wince, but no more. If I can beg some of this stuff off the guys at Upland Sports Group, I will be a happy man. I own probably 150 Jersey’s and more than 75 bibs, and I only really need this stuff in blue and black.

Give these folks an email or call, for deals on Bergamo Clothing:

Pro Shop – Intervals With The Pros