Blue Bicycles are back with some incredible values; Meld’s US Made custom saddles, updated range from Bont shoes, great quality at Inno Racks and Giro’s latest head gear.

BLUE Bicycles are the comeback kids for 2016. The company originally launched as a brand by and for racers with solid designs and performance. After struggling through ownership change, the brand is back at Interbike and they’ve become the house brand for a manufacturer that builds frames for lots of companies you would recognize (a bit like Merida).

With manufacturing and finance in a more stable place, the company focused on creating a lineup that would get back to the original goal at Blue of building very good performers at relatively affordable prices. While I’ve not sampled anything from the new Blue, they sure as hell met the price point goal…

They have aero and all-round road models on offer, but I think the standout in the booth is the Prosecco EX… 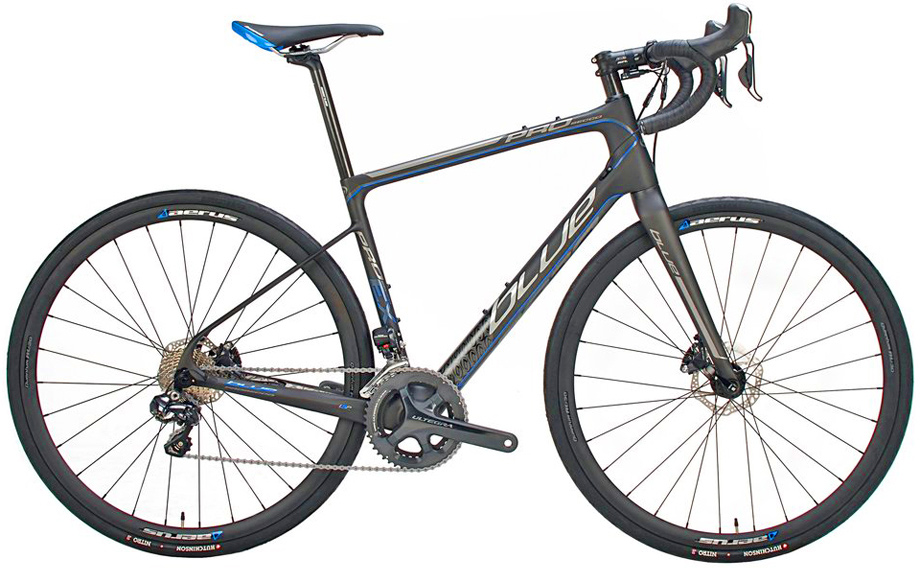 Two build levels were on hand, The Prosecco EX DI2 and EXg, with the latter getting a more gravel/off road build focus. 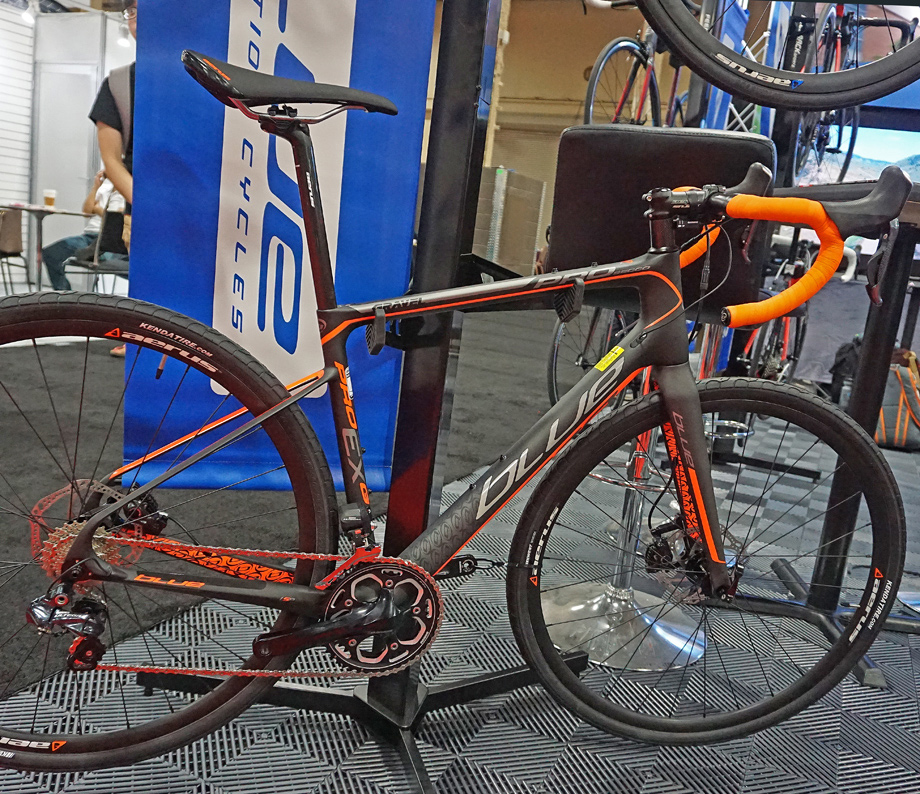 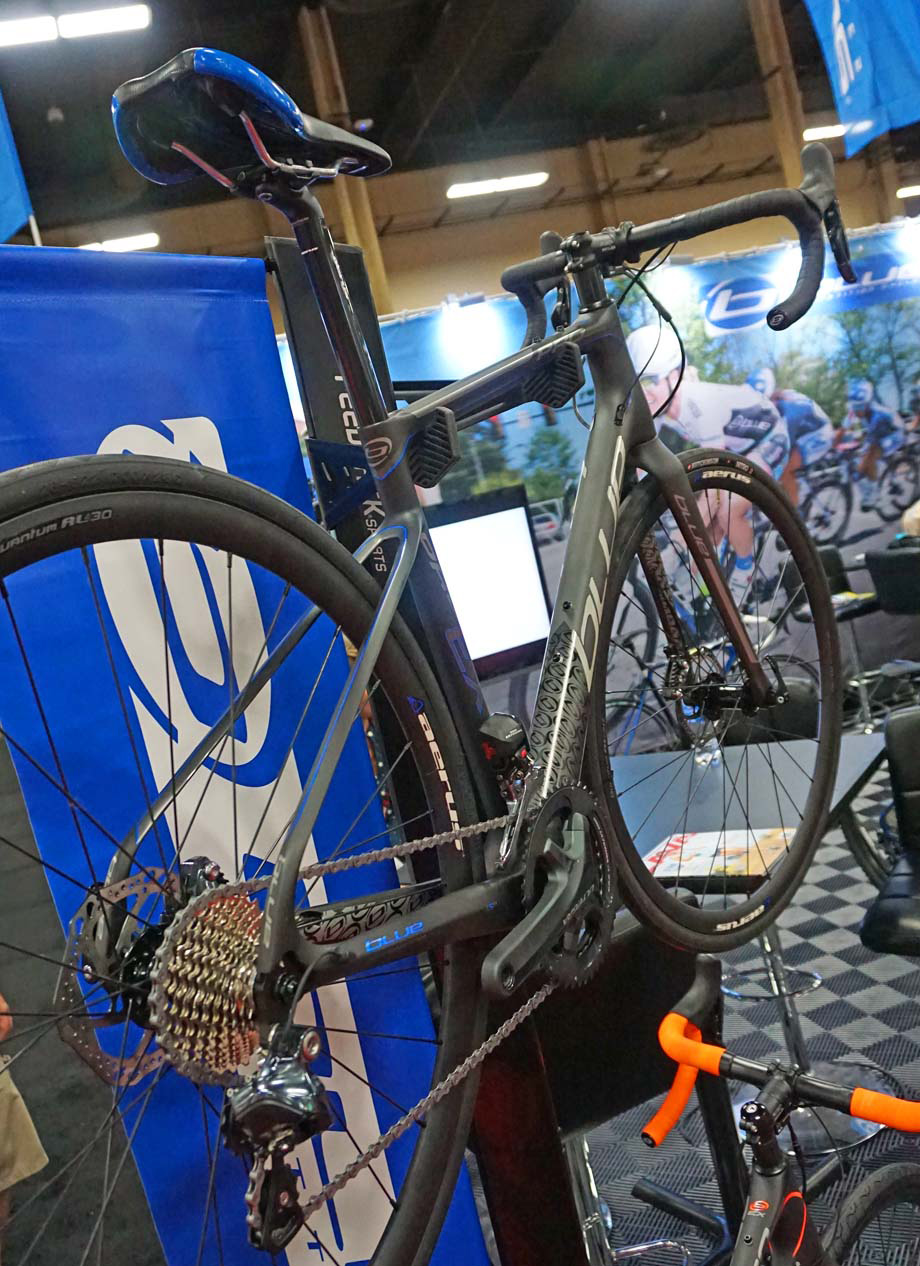 The frame features stable geometry, a healthy slope to the top tube with quite a lot of exposed seat post to help with bump damping. You’ll clear tires up to roughly 40 section (depending on your rim choice). 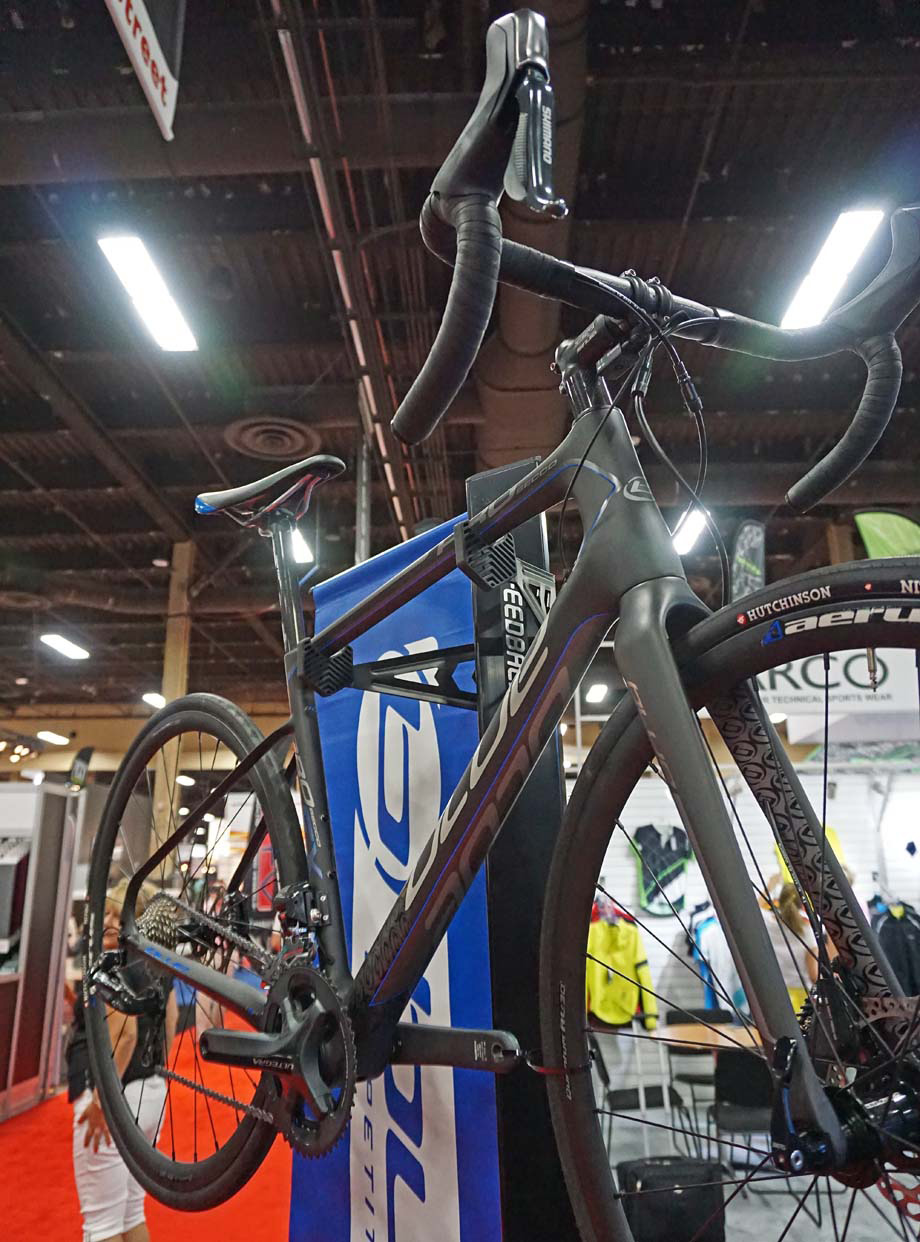 The finish quality here was VERY good here. Blue seemed to have paid attention in laying these out and the Prosecco’s checked a lot of boxes to mix in with the fleet of other $4 – 5,000 gravel bikes with ease.

The thing that seemed the most out of place??

Adding carbon wheels and a couple of other touches (the final “EXg” spec is TBD) and the price only jumps an estimated 300 bucks, making the Prosecco a HELL OF A DEAL… 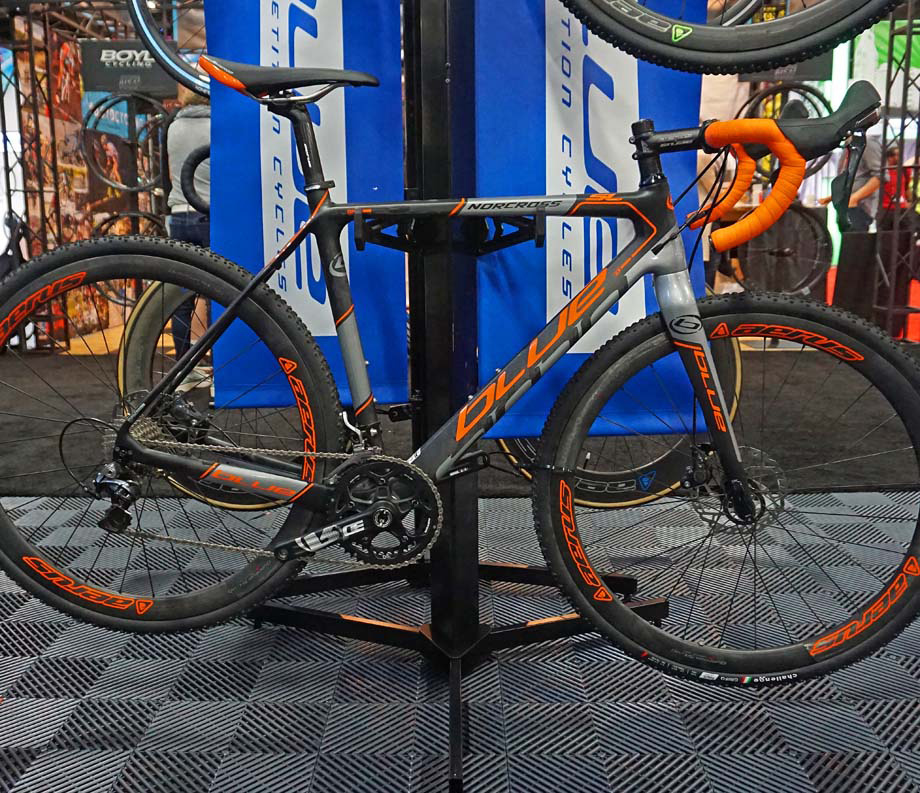 …and the Norcross EX. 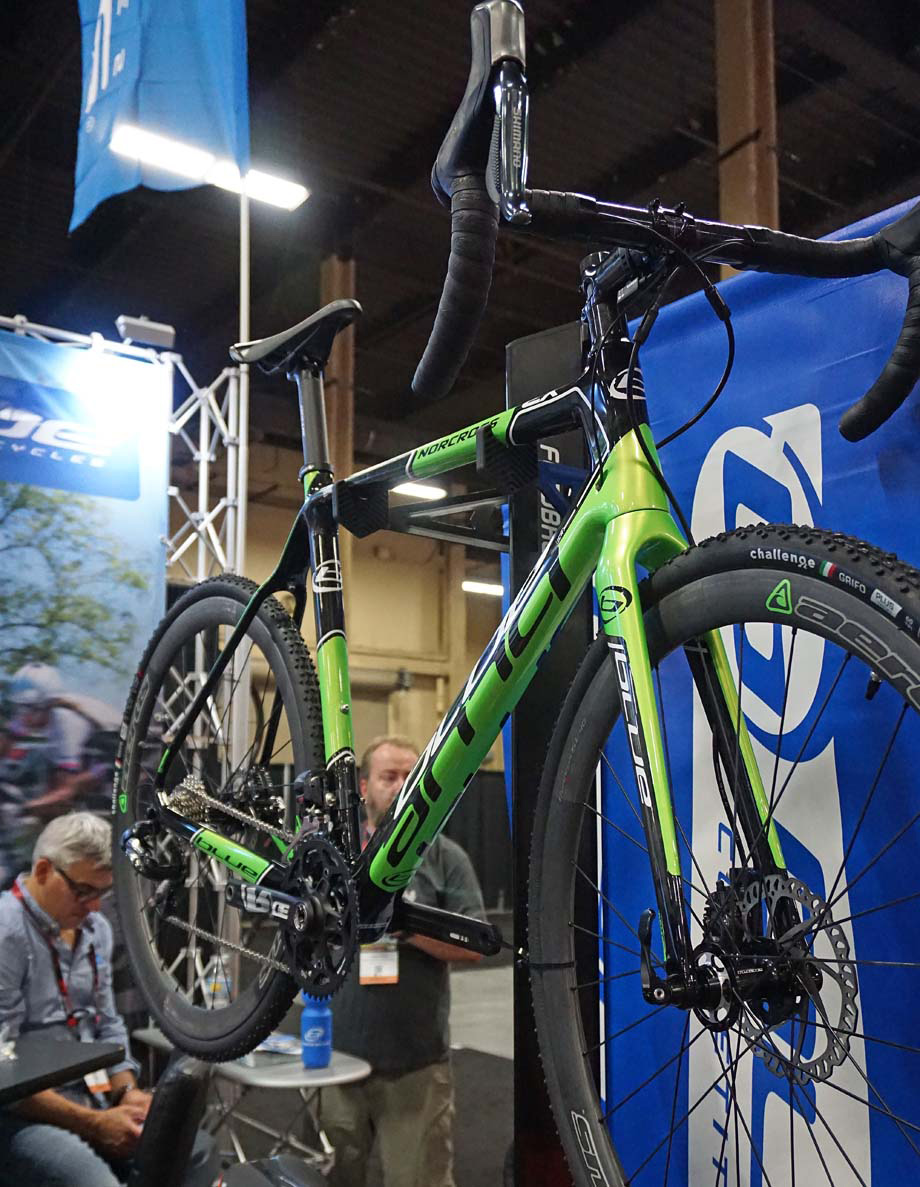 Both models here feature the same High Mod T-700Carbon as the Prosecco built into the sturdier format for cross.

They also built using carbon tubeless-ready clincher wheels, solid Challenge Griffo rubber and Shimano’s R785 Hydro brakes, but the EX uses Ultegra mechs while the SL bumps up to Dura Ace Di2.  These are both well laid out rigs and they’re also solid deals at $4,461 (EX) and $4,600 (SL). 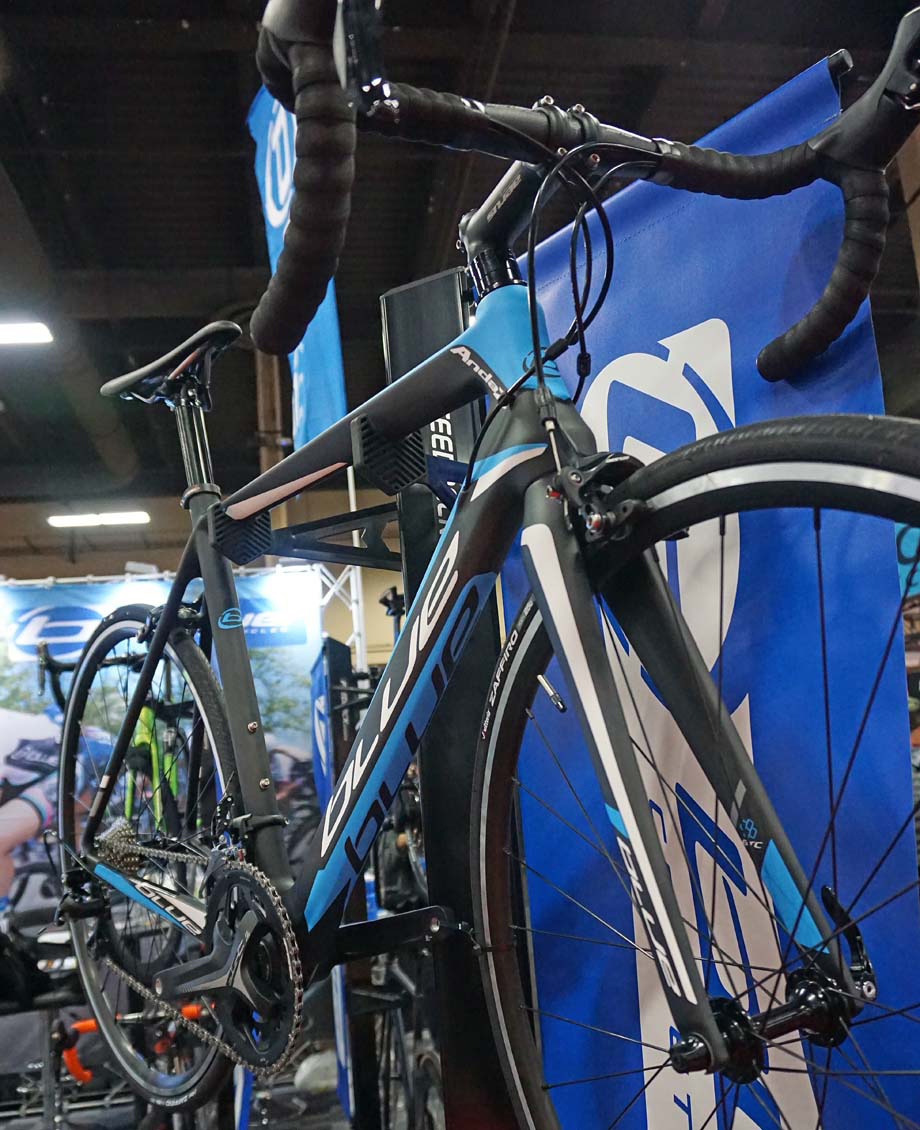 This is a full carbon frame and Shimano’s 105 build (with FSA Omega Cranks)… This bike costs less than any of the 3 front wheels I have sitting next to me.

SRP for the Andaz is a double-take inducing $1100.

Blue have more to offer in their lineup and it seems like they’ve taken the couple of years away from the show to set themselves up to offer quite a bit to the public (and their dealers). With companies like Canyon about to reset expectation for price, it seems like Blue are offering value ahead of that curve.

You can check out a bit more at: RideBlue.com 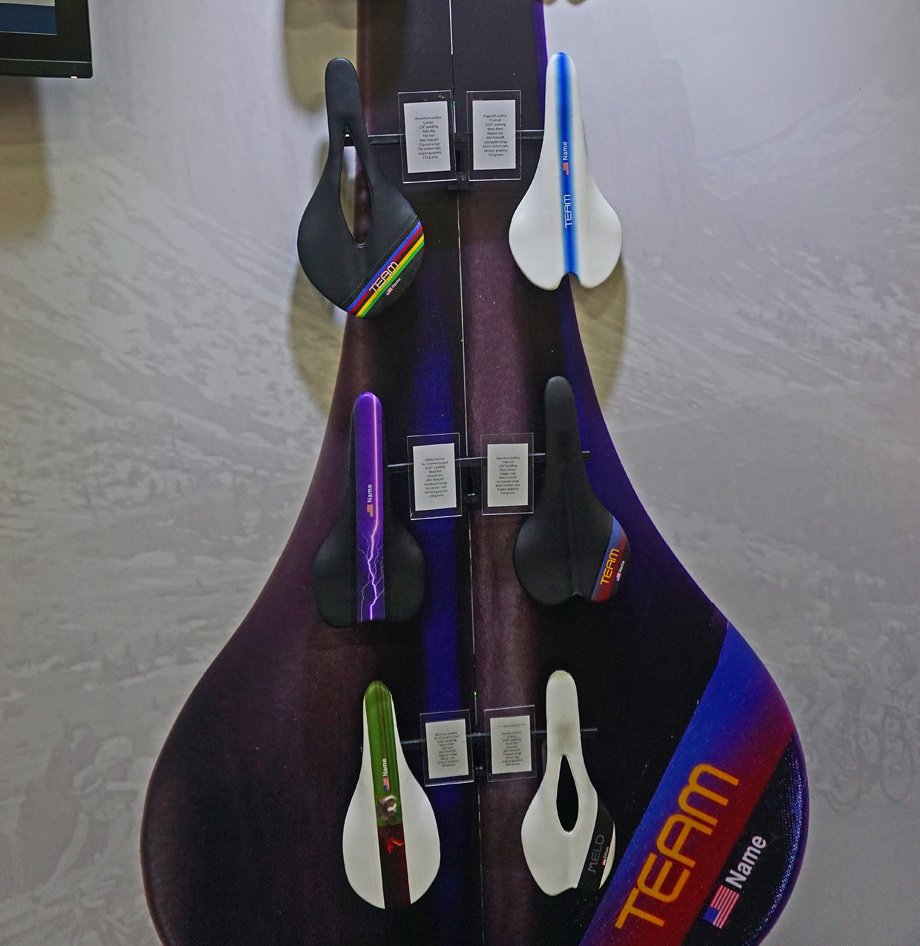 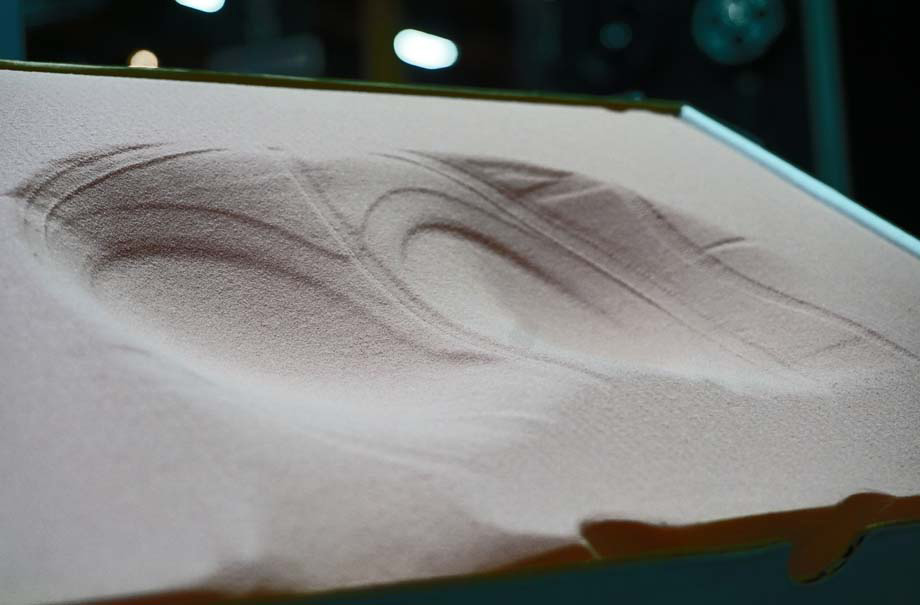 They use this, along with having you populate some data fields to determine an appropriate shape, width, cut out size, padding thickness, rail type and more, and then knock out a carbon saddle. 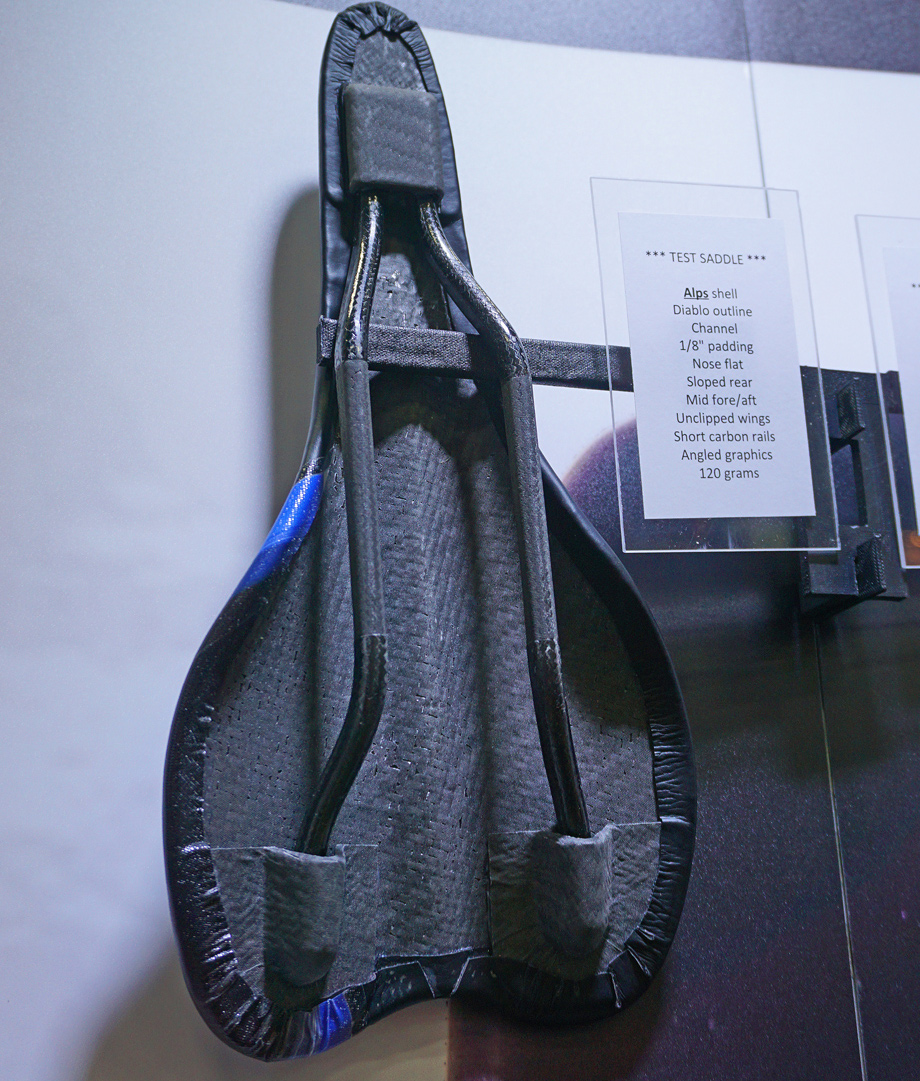 There were a host of shapes available, as well as a few cover options. 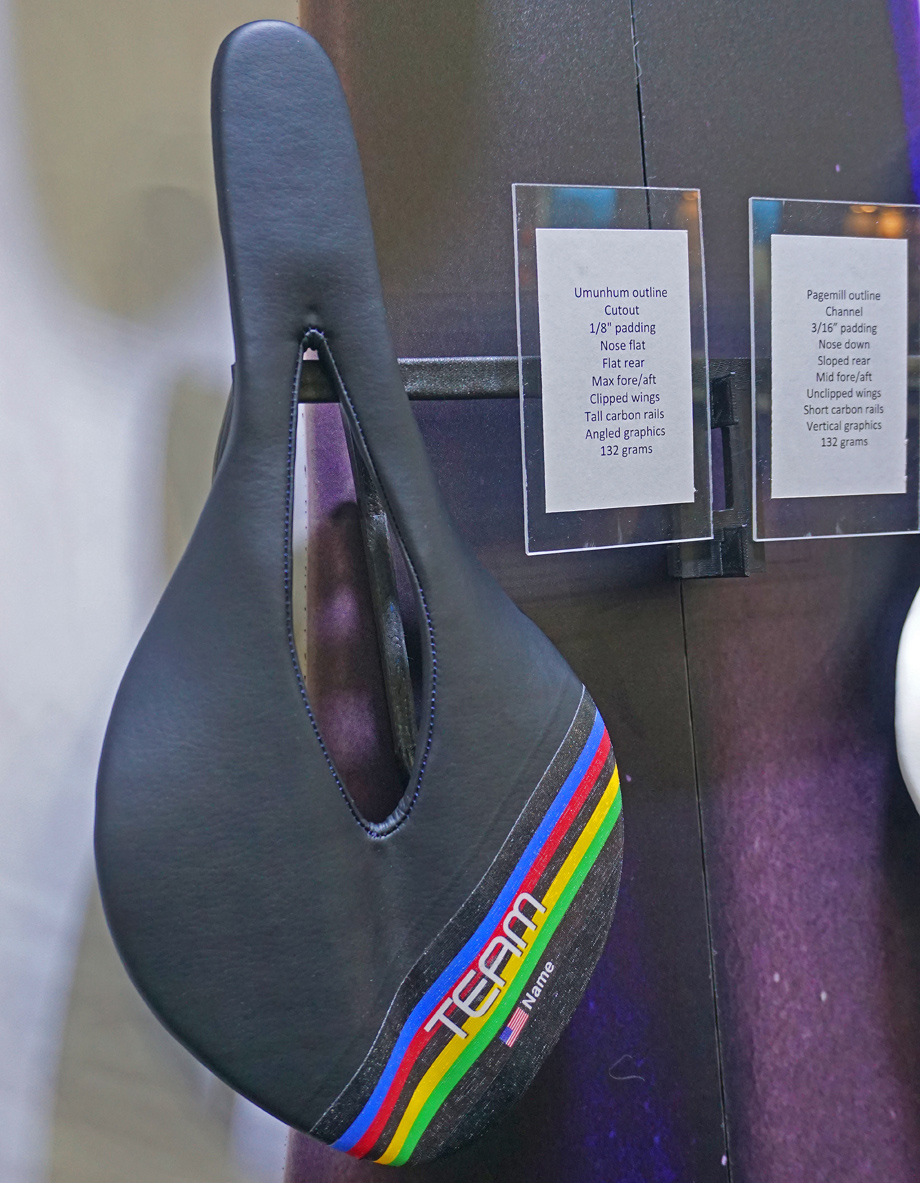 But the key here is the flexibility in design that allows Meld to make a very broad variety of saddles to match the user.

The process is fairly straight forward and depending on the number of orders in house, it takes a couple of weeks from the time you return the crush box to them to make the saddle to spec.

The costs are fairly simple as the offering stands now. Metal rails and carbon shell are $250, Carbon rails and shell are $325.

You can see more at: MELD3D.COM 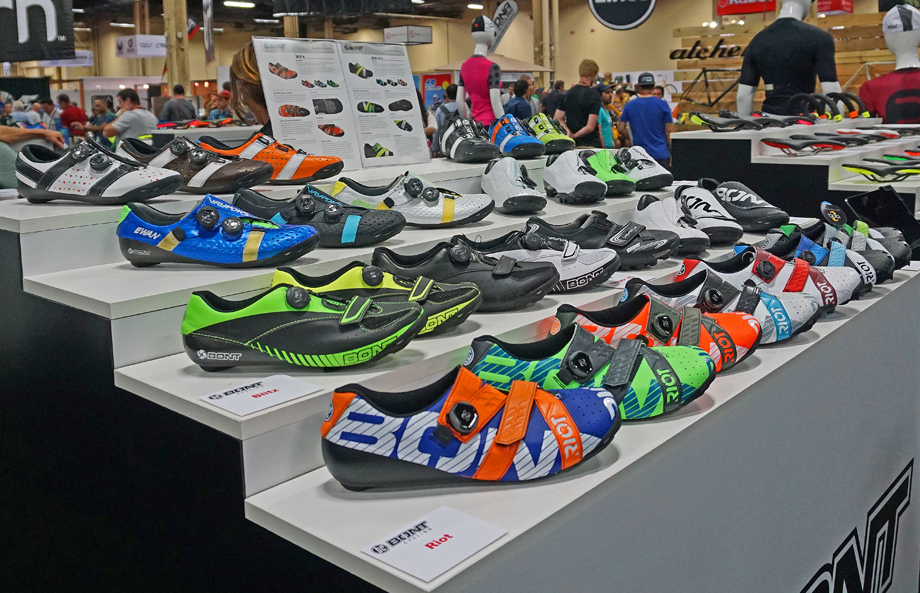 Bont have a Halo model shoe with a spec sheet of uber-goodness on hand in the form of the new Vaypor +. 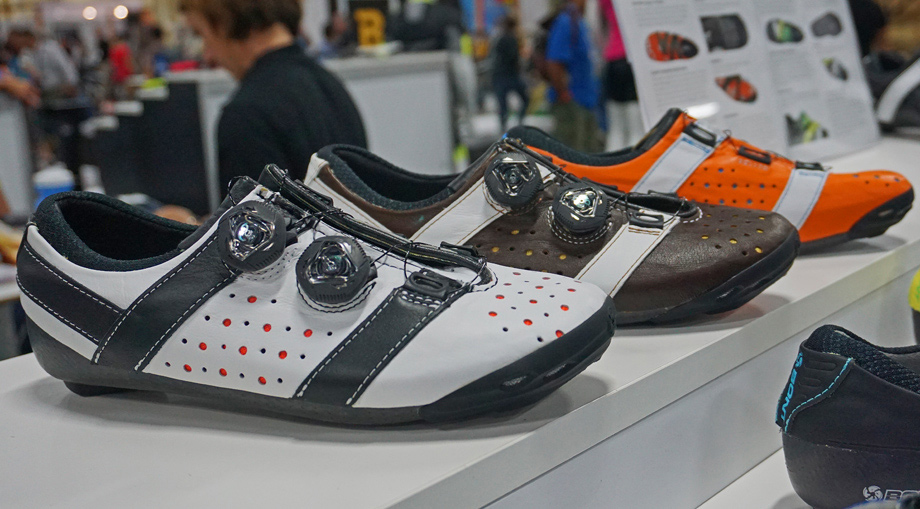 These are Kangaroo skin upper (outside) that is at once thin, light and relatively highly protective (stronger and much more abrasion resistant than leather, which is why a lot of the MotoGP riders’ suits are made from it). The upper is well perforated and there are toe vents with mesh cover as well. The inside gets a leather lining and there is a thin layer of highly stretch resistant material in between the lining and outer-roo skin. 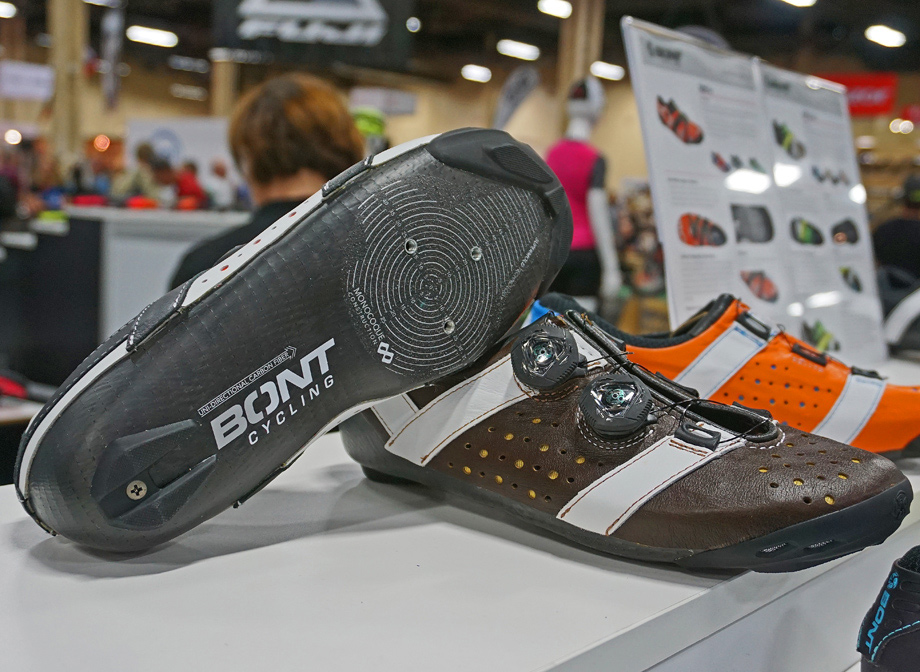 The refinement of the interior versus the Vaypor S should give much of the same performance and add a bit of comfort.

The sole is a UD Carbon monocoque and that carbon is always sourced through Toray of Japan. And Bont are using a resin throughout the entire lower section that allows the full chassis to be heat moldable (versus most competitors who have only a section of the shoe that is moldable).

While the Vaypor+ earned loads of attention, the shoe with the most buzz is at the other end of the cost scale.

The updated Riot are the first fully moldable chassis shoe with a solid feature set that I’ve seen that didn’t come in north of $300. (In fact it’s WELL south…) 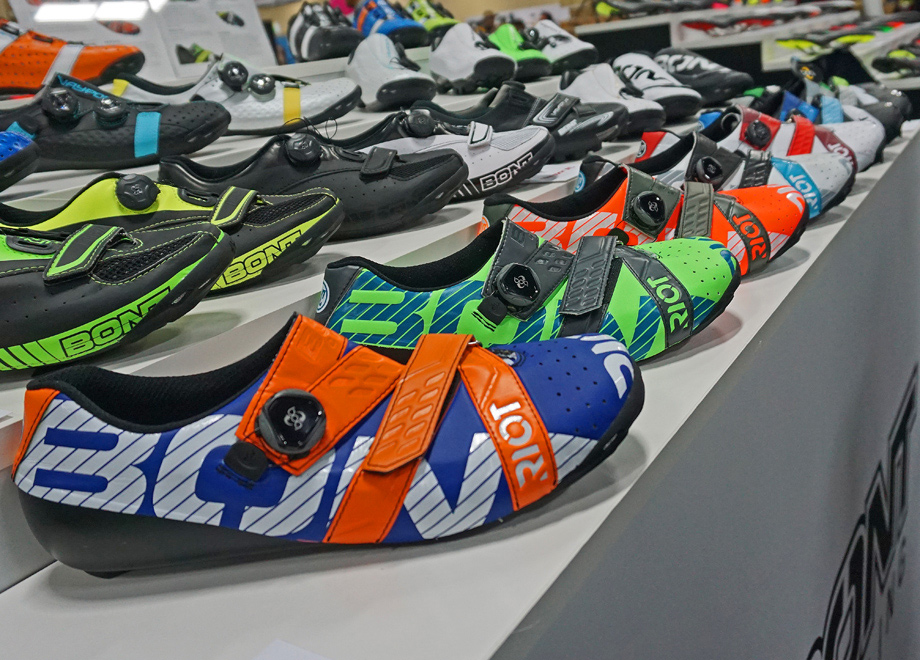 A slew of colors are offered for the microfiber upper (a synthetic, stretch and abrasion resistant material) that features either a BOA closure along with velcro adjustment. Toe vents and perforation across the forefoot and in the tongue will help breathing. 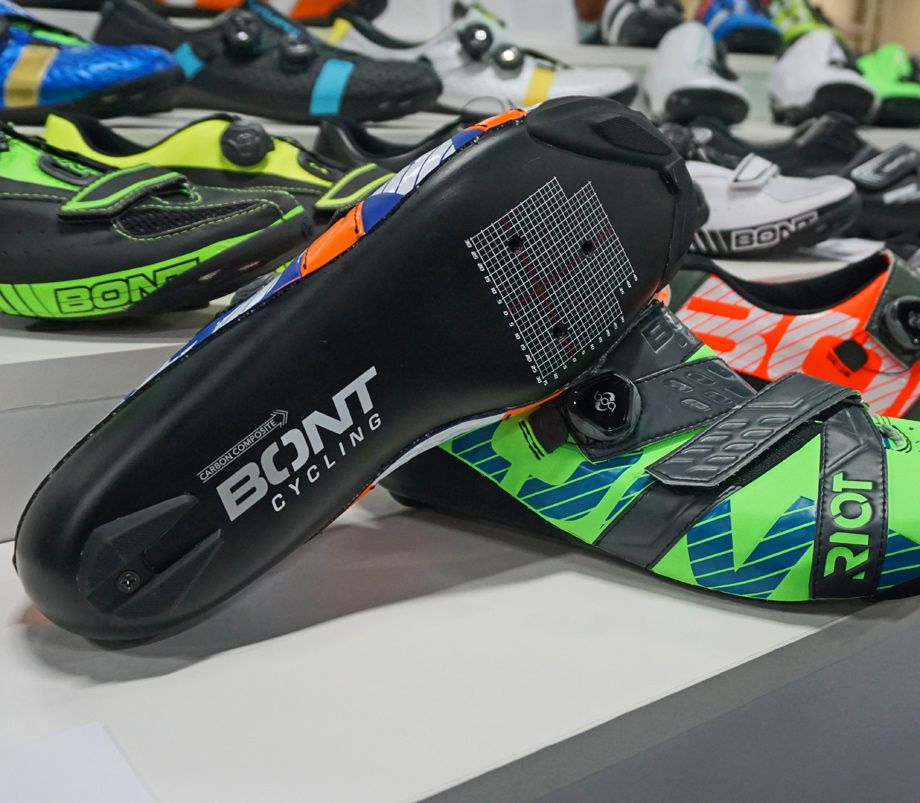 The microfiber upper combines with a carbon and glass fiber fully moldable sole. The sole has similar resin and the construct is moldable front to back, like the more expensive models.

The new Riot is a front to back revamp that gives more even closure pressure from the upper and more importantly, it now features not just the mold ability of the more expensive models, but the ergonomics / lay out, tub design, and heel cup that set Bont apart as a brand in general terms.

More from Bont at: BontCycling.com 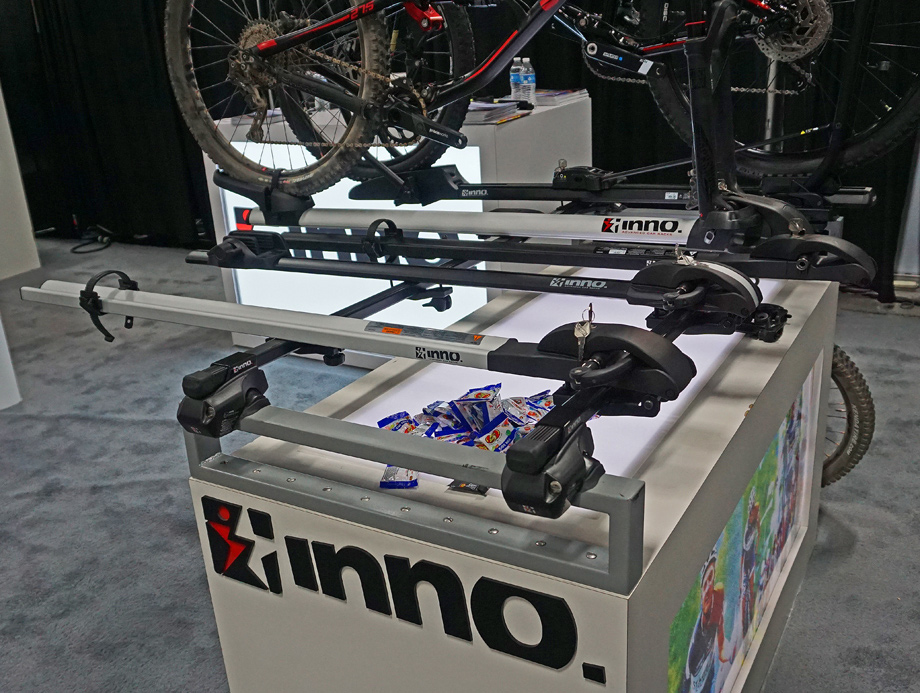 While you’re probably like me and don’t recognize most things not made by Thule and Yakima, Inno utterly dominate the Japanese market. They’ve been making racks for 30 years and are a part of Japanese mega-corp Carmate.  In the case your car has a headrest, you’ve already been touched by Carmate founder Takaaki Murata.

At Interbike, their latest offering is a 2 bike carrier that was compact and light enough that someone was walking around with it… 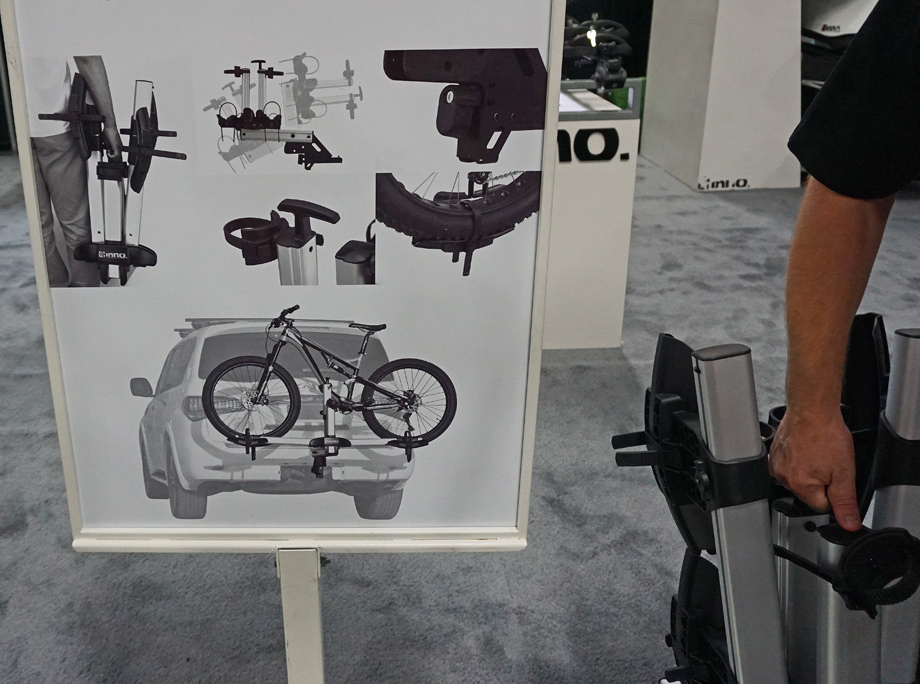 While Inno are horrible at naming things (this is the INH330), they’re pretty damn great at designing and building racks. 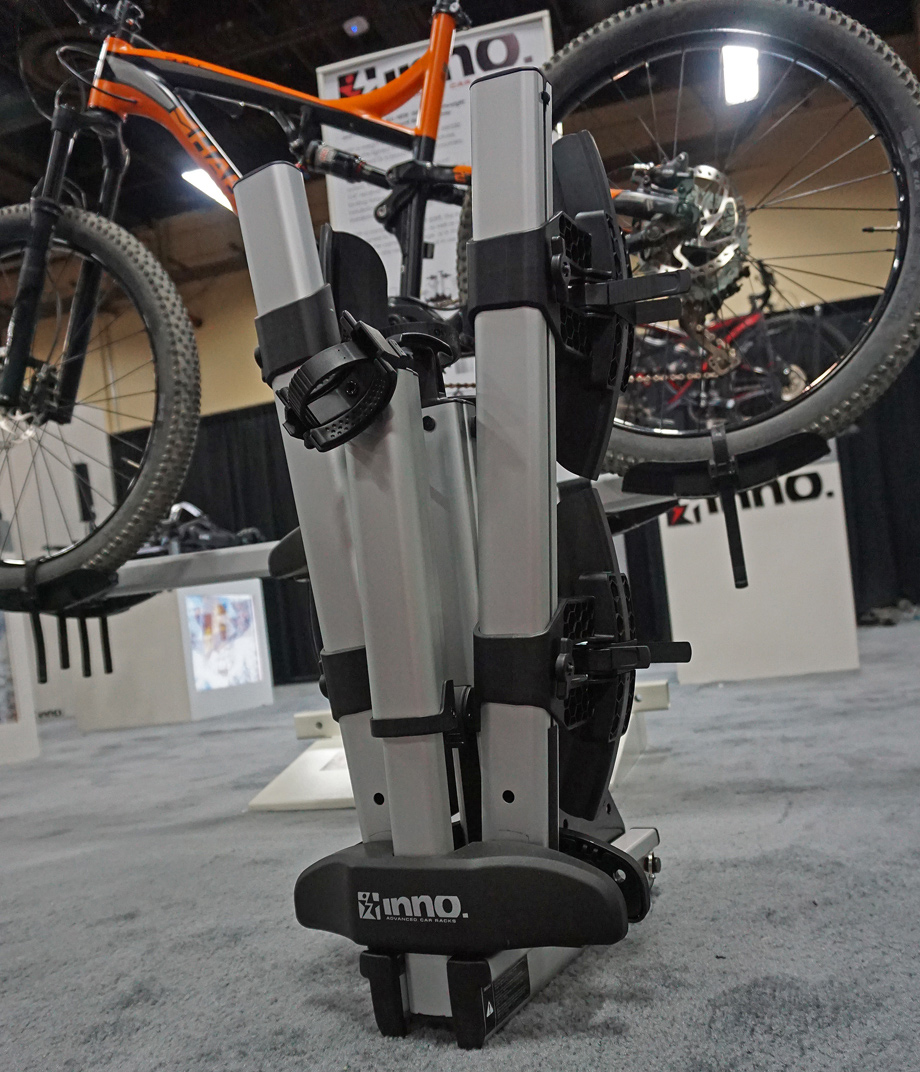 The INH330 (that I will now refer to as “RACKATRON”) is a transformer that goes from taking up about a square foot and a half (eyeball measure) of real estate in your garage to plugging into your trailer hitch and expanding to carry a couple of bikes comfortably and securely.

Once the adjustments are made for the bike size, installing RACKATRON will take anyone with a mostly functioning brain and hands a couple of seconds to plug in and go.

RACKTATRON is an aluminum and composite construction with adjustable (individually) wheel trays, adjustable uprights, ratchet wheel buckles, 20-29 inch wheels (5” fat bike to road tire adjustability), it tilts down for trunk or rear cargo access and comes with lock, keys and security cable. This will also plug into a 1.25 or 2 inch receiver hitch.

The whole thing will retail for $399 (and they’re in stores now). 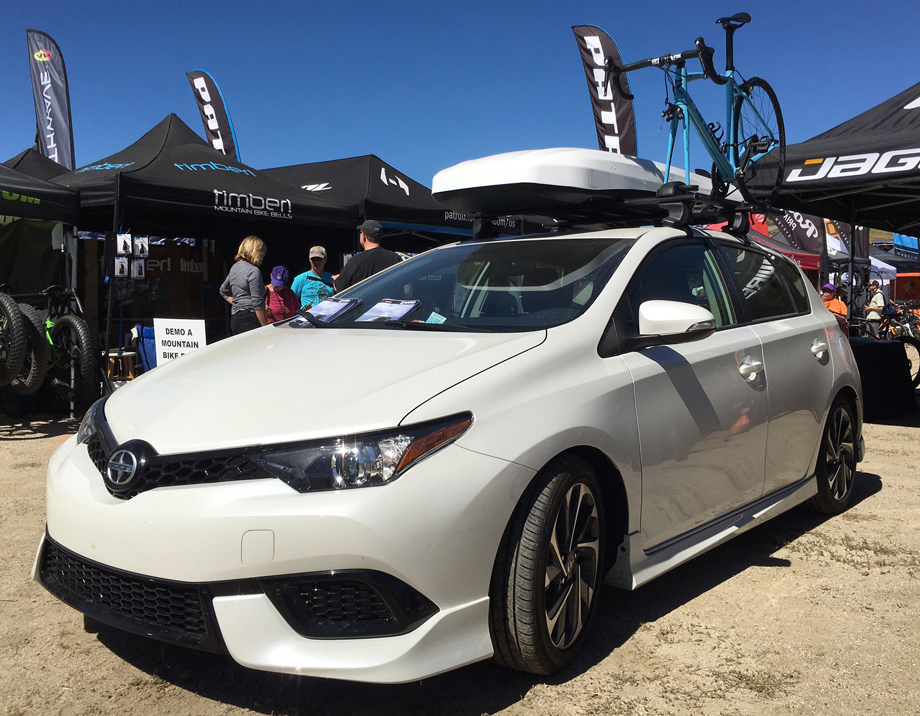 The product feel, fit and finish are solid through the range and the material spec is very good. Inno know what they’re doing and the designs and execution are all what you would expect from a decades old, top tier manufacturer who dominates a technically savvy and quality conscious market like Japan.

There are options for days in this space, but Inno is a brand you should take a look at in the case you’re in the market.

You can find more at: USA.InnoRacks.com 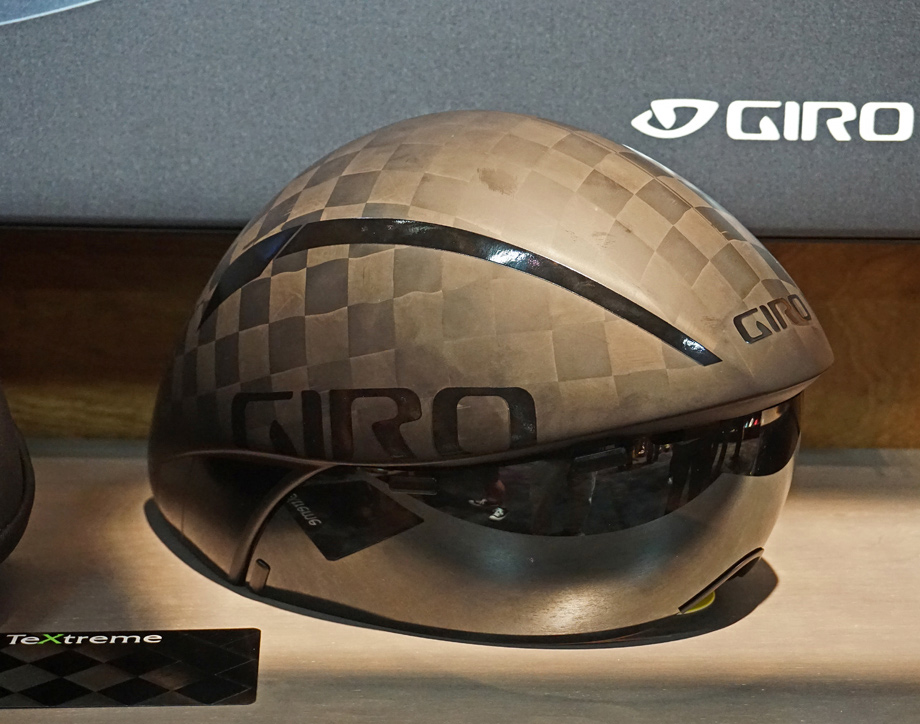 Their latest TT / Tri lid is slippery to be sure. Giro spend more tunnel / development dollars than some helmet companies spend on complete operations, so you would expect this to slip through the wind fairly well but that’s not the most impressive part of the new cap.

The functioning ventilation and weight are the real story here.

The weight is the result of using a carbon that costs several times what the fibers used in most helmets will. Textreme is to carbon what forging is to metal… 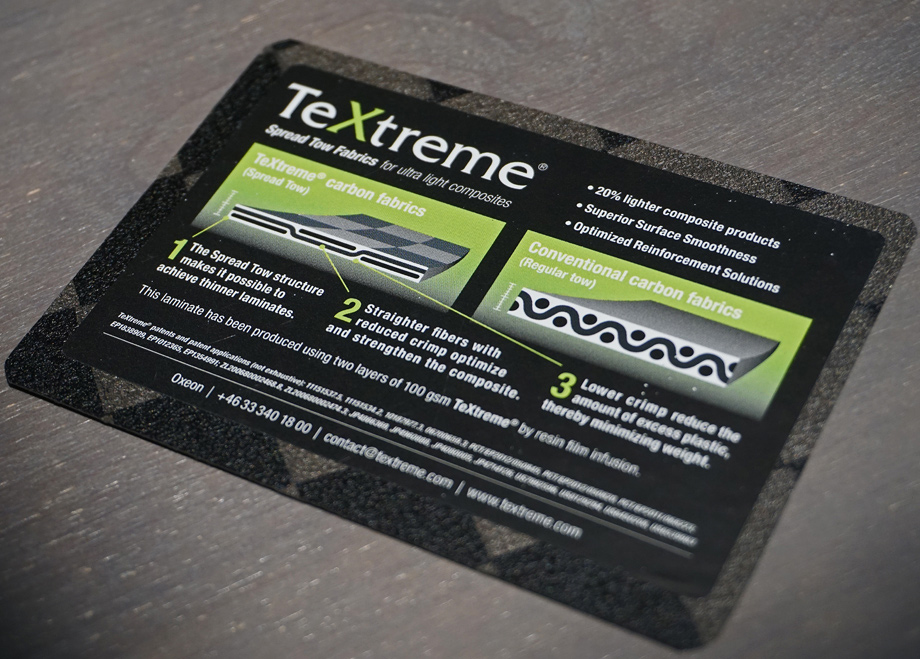 While the process doesn’t involve a multi-ton press smashing the shit out of something so hard that it reorients the structure of the material (what forging does), the result is a carbon fiber material that puts much more strength in a thinner / smoother structure. 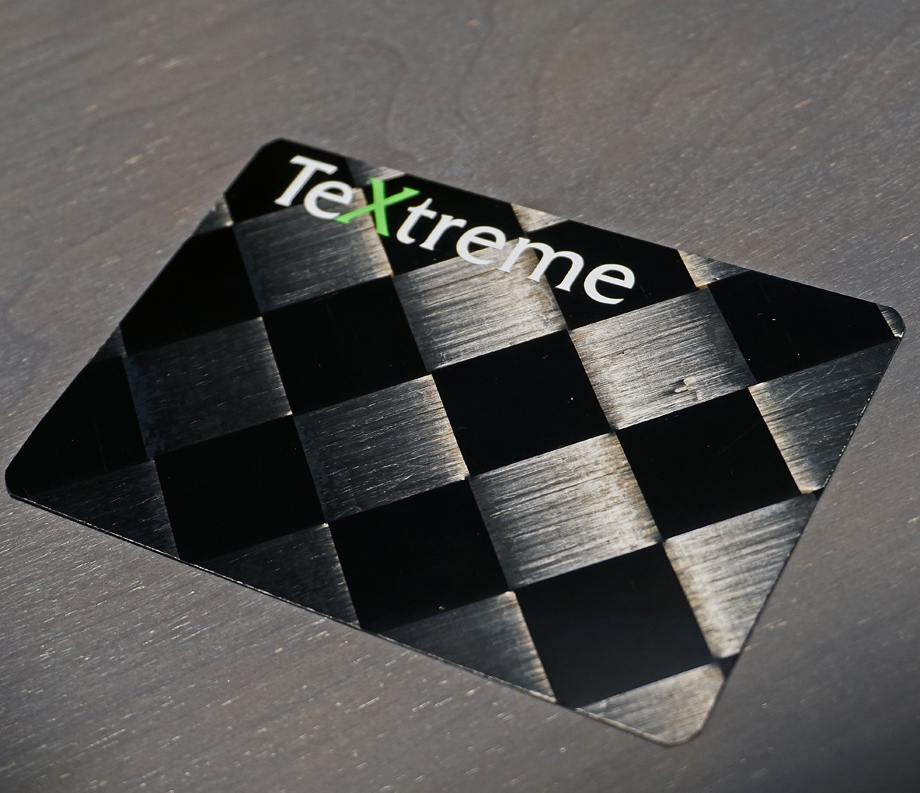 The result is a helmet that is light enough that you would swear the production item is just some super flimsy model and the “real thing” couldn’t possibly weigh what this does… 450 grams.

Beyond the weight, the Aerohead Ultimate has a smaller front and narrow sides that still pass safety spec with the strength of the Textreme product. 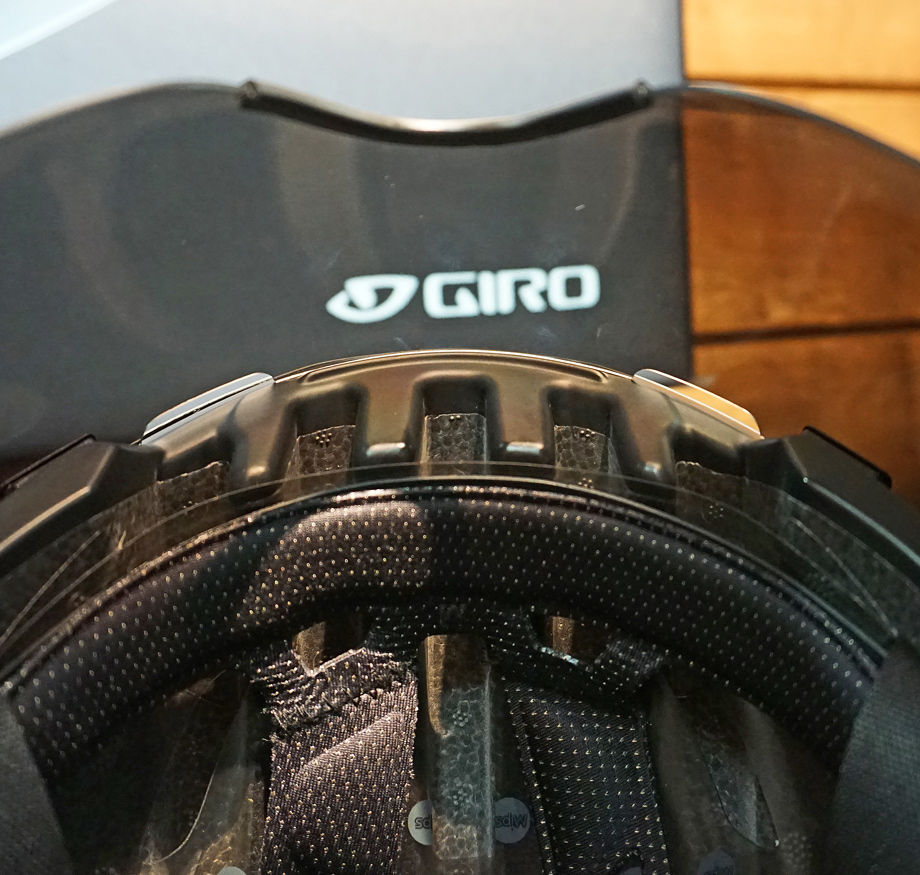 The channeling is substantial and runs the full length. Along with the retention system, there is exceptional air flow available for a helmet as slippery as Giro state. 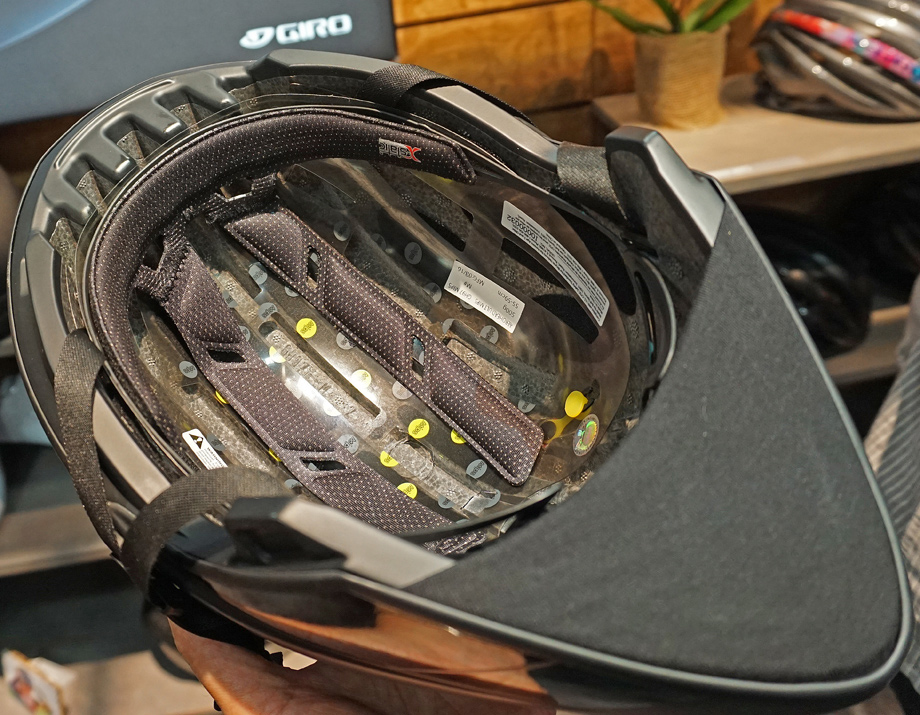 The MIPS system also takes the ventilation design into account, reducing rotational forces in event of a crash but allowing for air flow through the shell-within-a-shell set up.

This is an exceptional design from Giro that does an outstanding job of combining low weight, high relative protection and ventilation into a helmet that will have class leading aerodynamics if it meets Giro’s specs.

I cannot stand even the thought of riding TT’s, but one of the most miserable parts of that discipline (a helmet that allows for some venting while keeping drag grams low) is certainly getting better.

They’re in stores now and they’re not inexpensive at $550 SRP, but then when you set a new benchmark for combined features, you can set the price.

More info is available at: GIRO.COM