Bitter sweet. That’s what comes to mind as the latest review for BMC’s SLR01 gives me an opportunity to tip my cap to Franco Ballerini. Here’s to a man that lived to do almost all of the things in my own dreams…

It’s an impossible task to try and talk about a life as full as Franco Ballerini’s. The guts to win the Hell of the North a couple of times is a fraction of the steel required to build team discipline from the egos and personalities that come together to form the Squadra Azzurra… 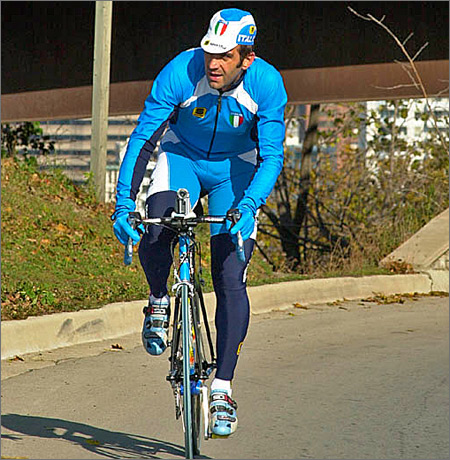 Here’s where someone clever might try a smooth segue between man and material, but I’m just not having it. I wish Franco were still around and while we made this one-off bike ourselves, BMC management were Franco fans and friends too. With that I put together this SLR01. 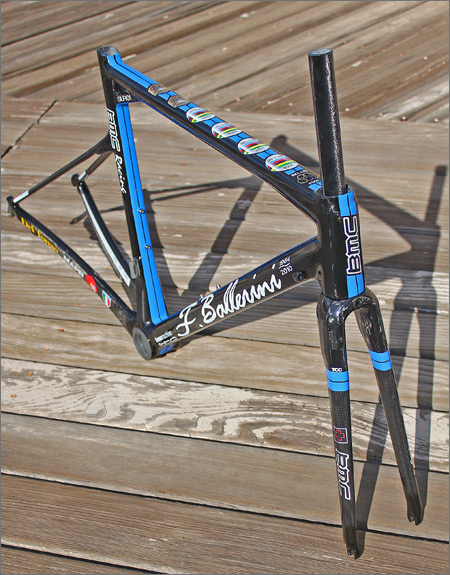 BMC have become one of the most recognizable brands on the road. This all started a long while back, a bit ahead of Pez having one of the first couple of BMC bikes on North American Soil… 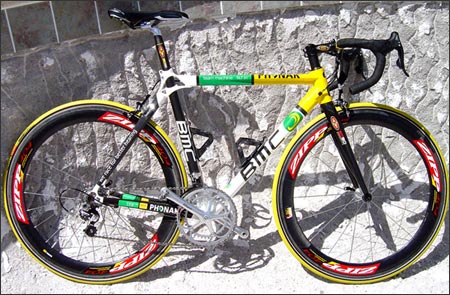 At the time, it was Pez, Tyler Hamilton and not even a half dozen others in the US with a bike that was the easiest bike to recognize in the whole of the peloton. But looks never last in cycling and it turned out to be the performance of the SLT 01 that held the cycling crowd’s interest. It wasn’t feather light but it rode well and had very good stiffness.

Advance a bit and BMC made an all carbon version (the former TEAM MACHINE SLC01 – read the Pez-review here) that did a nice job of addressing weight and rode a bit smoother than the SLT01, but very frankly lacked a bit of stiffness (especially in the front end and fork).

The SLR01 is what happens when BMC takes what they’ve learned from the last few chart toppers and combines it with taking their carbon production and spec back in house. 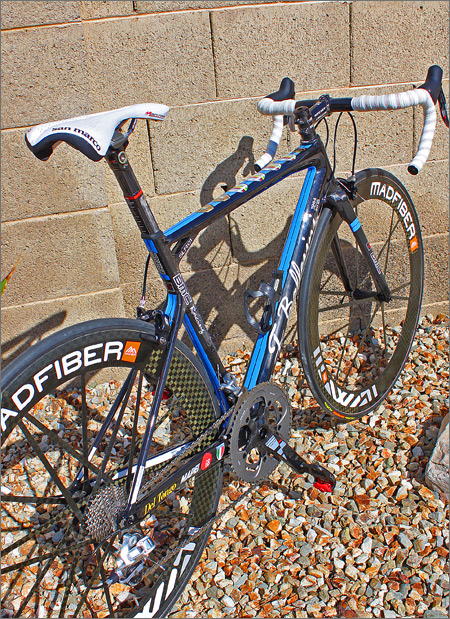 Large photos can be found HERE and HERE…

The SLR01 maintains a distinct look, but this time there’s more to the form than clever metal lugs.

TCC
It’s easy to spot the tiny support beam that makes up BMC’s traditional twist on seat tube to top tube joint. But the design for the latest SLR01 puts a better effort into proper use of both shapes and the choice of carbon fiber type and lay up.

BMC call it Tuned Compliance Concept (TCC) and BMC use a trio of fiber types and a lot of shape to make it come together.

We’ll start with the part of the bike that might be the smartest seat post design among any of the major brands… For starters, it looks as clean as a lot of ISP designs. 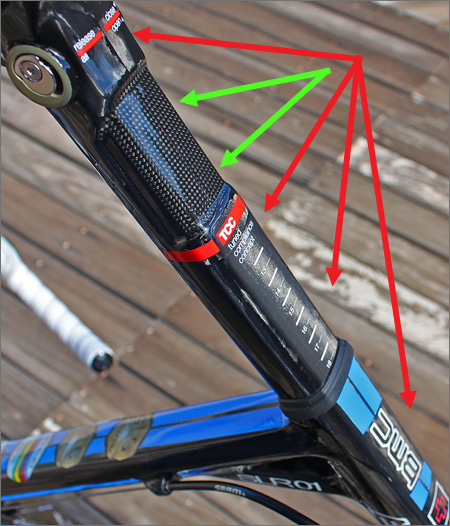 You’ll note there’s weaved carbon molded in and a pronounced shape change in the post just below the seat clamp (marked with green). The rest of the post, as well as the frame sections are higher strength and stiffness material.

The weave and shape changes are the easy visual cues to a post that is designed to flex backward but not flex much at all side to side. It’s tougher to see but the post is also wider laterally than it is deep in order to facilitate that flex backward.

This post is also fantastically easy to clamp a multitude of saddle rails in to as well as VERY easy to adjust for saddle tilt, with easy access bolts… 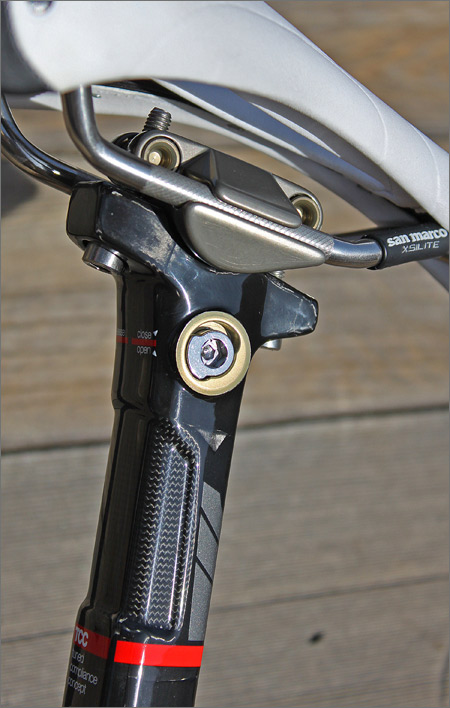 The bolt on the side of the post is how you tighten it into place once height is properly adjusted… Yep. That’s the seat post clamp. 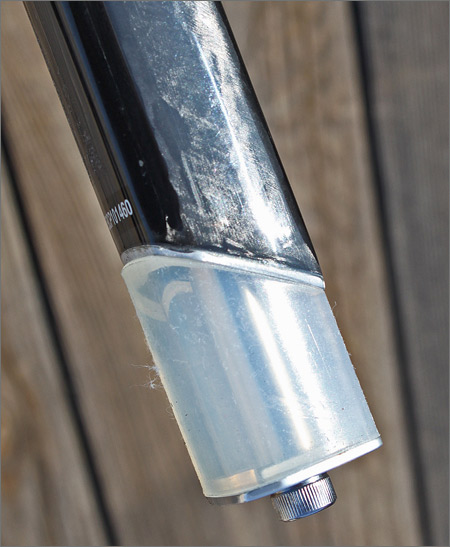 And when the metal plate is pulled up toward the post, it squeezes the elastomeric bung, causing it to expand against the inside of the seat tube. That makes this the easiest post to adjust and virtually eliminates that gut wrenching feeling when tightening a traditional seat post clamp and bolt against ever thinner carbon.

Quick note that our post is a Zero setback post, but BMC now have a 30 set and will have another model in the next several months.

Another TCC area are the seat stays. A quick look and you’d think the big difference here is simply that BMC attach the stays about 40% lower on the seat tube than most. 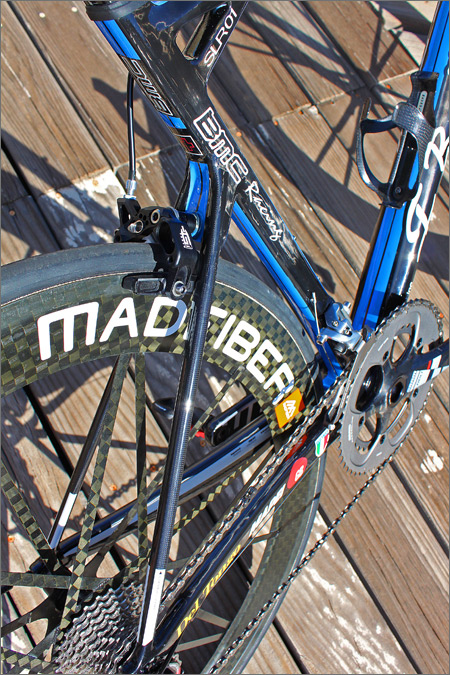 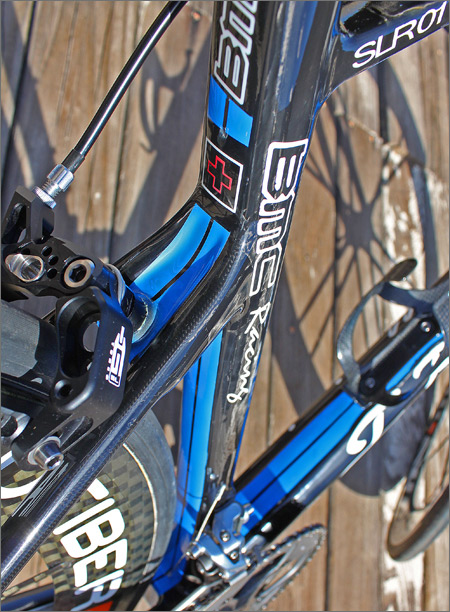 The rear end is also a mix of fiber types. Higher strength and stiffness areas (red) doing the job of limiting flex (and being more ready to take some abuse). 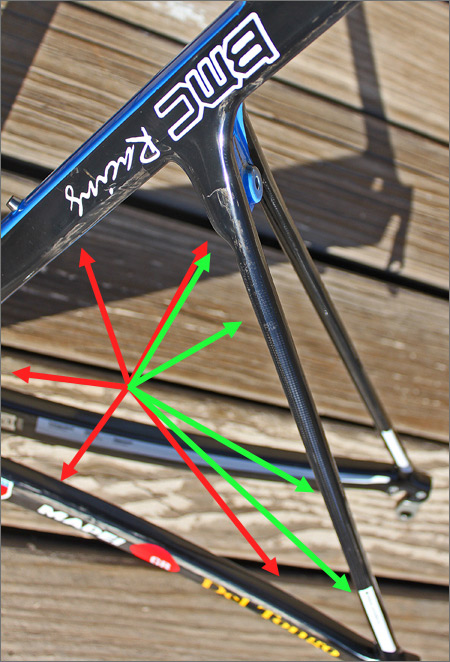 And a bit more damping and flex in the stays (green).

BMC also wanted the rear brake bridge mounted in a solid section to reduce any vibration at the brake bridge. 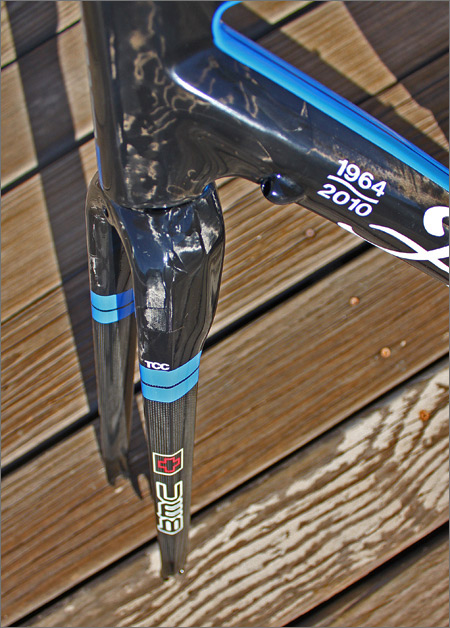 This is also possibly the best example of BMC making the SLR better end to end than the SLC. If I had to guess, I would say that while the weave layer runs the entire stretch from just past the crown to the ground and compliance is the mantra, the BMC fork is stiffer in every way than the Easton unit it replaces.

I would guess that the better sense of control for this bike comes to a large degree not just from a better fork, but from a front and that is much more stable all together.

The top tube loses some of the T beam shape of the SLC, but I think the total tube volume and contact area are increased… 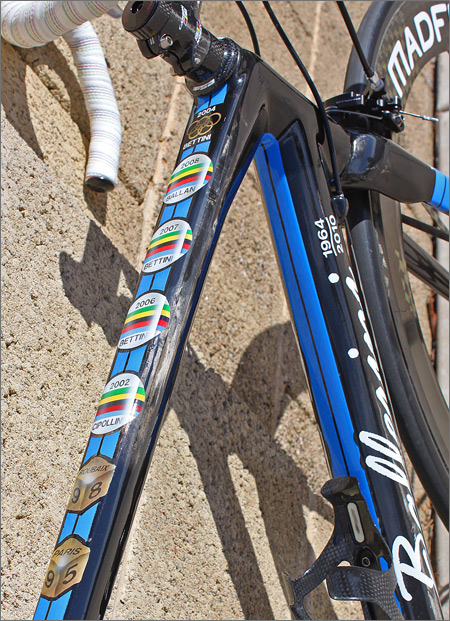 Those are a couple of cobbles on top for Franco’s Paris Roubaix wins, worlds globes with each of the riders names for WCS wins and the Olympic rings for best bud Bettini’s Gold…

The down tube is still a huge unit and it’s easy to see how much the seat tube flares out on the SLR01. 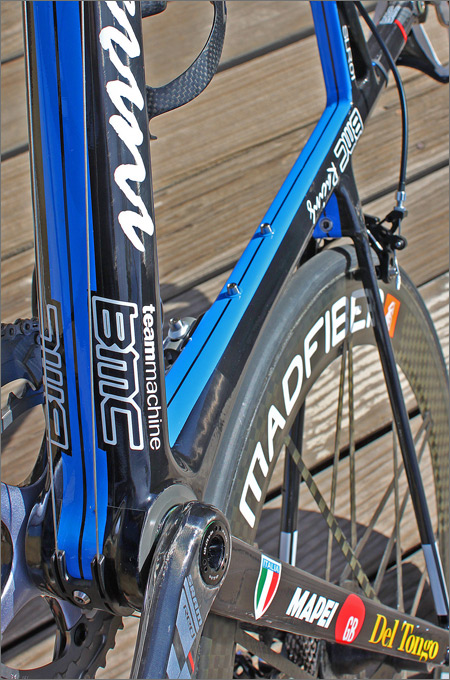 Overall, I think BMC did themselves a favor taking on more of the frame materials and design choices. They’ve not lost a step doing this without Easton, in fact the total package is better across the board. 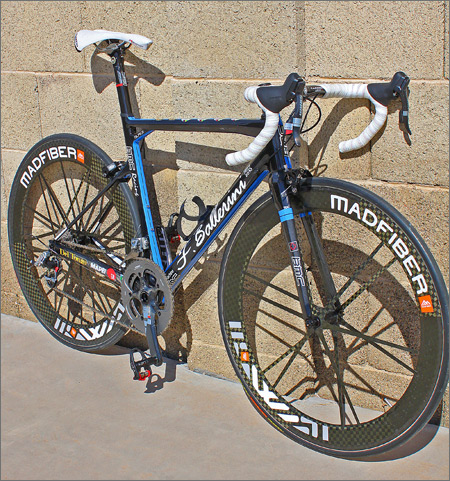 Odds n Ends
The parts choices were easy given we made this bike originally for Interbike display and had a bit of a time crunch… So readily available, solid, yet top line, kit was the call.

Ritchey have been under rated and under priced relative to the market for years but the Carbon Super Logic II bars were the exact fit needed, the weight spec was very good and the uni-carbon finish and logos were a great match. 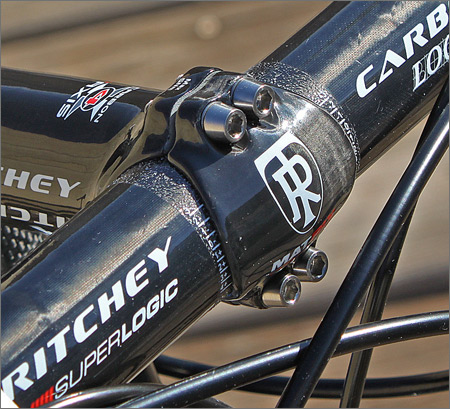 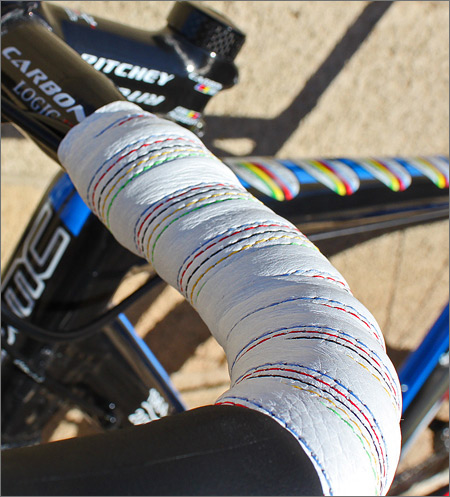 Never mind the custom World Champ’s stitching… There’s no better feel or look available at this point in cycling. Look back at my reviews and you’ll not notice me calling something the “best available” for more than 1 or two items and this is one. And they’re getting better at it.

The WCS Carbon 4-Axis stem also fit the bill with angle and graphics that went well. 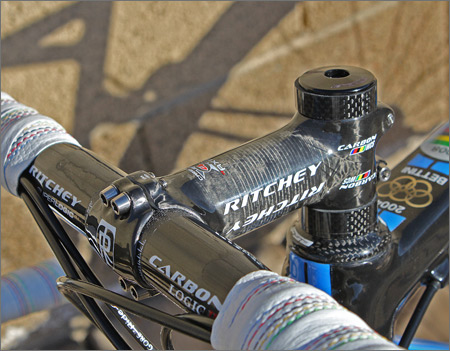 A bike part’s relative importance is, as ever, directly related to the proximity and effect on genitalia (as is literally everything else in life). With that, another San Marco Mantra was on call from Bikemine / Vittoria Industries North America. 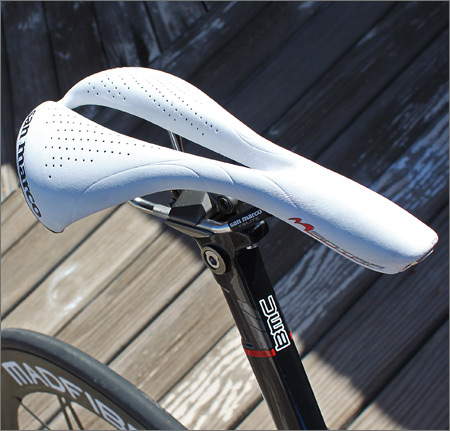 SRAM Red for the mechanicals was an easy pick. The finish weave of the carbon on the stock set matched up well, but the BB30 set up was a virtual “drop in”. No adapters needed. 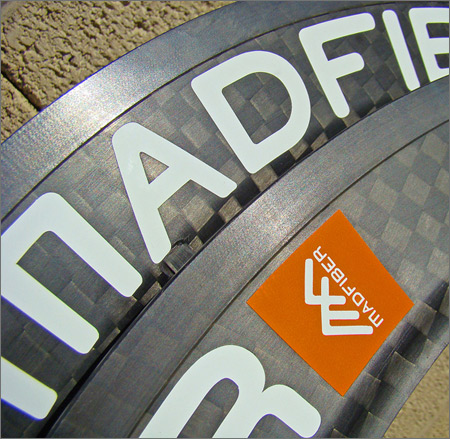 Madfiber Wheels we’re prototypes as seen at Interbike. But the refinement of these wheels has come a long way and they’re making some pretty special hoops that have the lowest MOI (they spin up easy) I’ve ever tested at their depth… (yes we pulled these wheels off and also rode the SLR01 with the same house rubber and wheels used on most prior reviews…).

So What’s It Ride Like
The SLR01 is a more compliant bike than a most bikes in the same or higher stiffness class. The big bump damping is really good on this frame relative to most other things in either its stiffness or weight class.

Speaking of weight class, the 53 we have here, fully built with pedals, bottle cage saddle etc. (including at least another 100 grams of paint) is 13.05 pounds according to Mr Park… Take the Madfiber wheels off and swap em for a lot of wheels (including some metal clinchers) and you’re still flirting with UCI minimums…

Handling is mid to quick. The fork makes the SLR a LOT friendlier than the SLC when dipping hard into a corner. Holding that curve and adjusting a line a bit is also easier with both better compliance and more balanced (and greater overall) stiffness front to back. This isn’t a “laid back” bike feeling bike, it leans toward quick handling but it doesn’t try and bite you…

All this talk of better stiffness needs a little more clarification. The SLR01 is not super stiff. It’s reasonable but it’s not at the top of the stiffness charts. Balls to the wall sprinters might appreciate something like the Racemaster better. In fact, BMC make no bones about supplying their Pro Team guys with 3 or 4 different models rather than forcing their top line model down everyone’s throat and claiming it “best at everything”.

Then again I haven’t talked an Impec out of BMC yet to see how it rates with the best of custom builds from Parlee, Serotta, Crumpton, Cyfac and the like… BMC making custom might give them the ability to cover a lot of ground in stiffness, comfort and handling. That’s a hell of an advantage over their top tier competition that are convinced that paint is all that is required to make a bike “custom”…

Impec aside, with the SLR01, BMC produced a frame that demands inclusion in virtually anyone’s arguing the top production frame available… It lands squarely in the face of Trek’s latest Madone, Colnago’s EPS, Specialized’s newest Tarmac, Parlee’s Z4 and a few others…