The answer is: because I am sick of bottle holders that let your bottles rattle around and fly out, but still wanted something flashy, light and different. It was about that time that a friend of mine who is staying in Tuscany for 3 months (turns out not everyone road the dot-com wave till it hit the rocks…) emailed me a picture of his custom Pinarello Dogma (just in case the 3 months in Tuscany weren’t enough to one up me…). Great looking bike, but what caught my eye were the cool Carbon bottle cages that had a little lip to keep the bottles in (Unlike the Zipp cages I had). 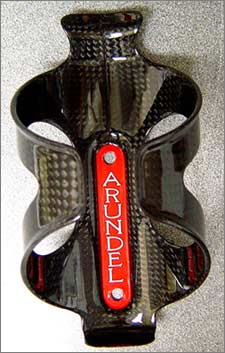 Although he refused to tell me what kind they were, a quick call one afternoon when he was away allowed me to ask his new Girlfriend (also designed to make me jelouse by the way) to take a look. She tells me the name, and I start looking high and low expecting them to be ultra exotica, only to discover they are from a couple of guys in Texas!

Arundel is basically a couple of riding buddies that decided to make something cool for their bikes. Looks like they succeeded!

Cages in Carbon have been a real example of cool before functional, and the result have been a few Ultra brittle cages that snap off in your hand (from personal experience) won’t hold a bottle (again experience) or hold a bottle so tight that you have to stop and turn your bike upside down to get a drink (watched someone else do that one…). These cages from Arundel are none of the above. The only draw back being that the design means you have to have plenty of top clearance to load bottles in and out because the curvy sides block bottles from easy side entry. If you have a short frame, I would go with something else. 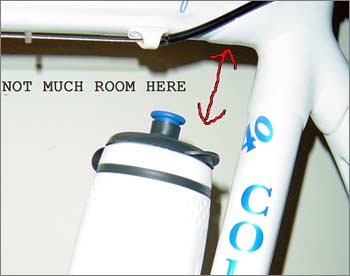 A good snug fit eliminated bottle rattle. A little lip at the top holds bottles in place, and the carbon is laid up loose enough so that you won’t pull your head into your top tube trying to get a bottle out. They weigh about diddly (under 30 Grams), and come with screws etc… (A note to Colnago owners, there is a recess that will allow you to use the bottle bolts that the bubbleheads in Italy decided to make in a “special” size) 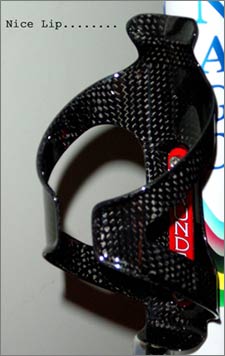 They ain’t cheap at 40 bucks a wack, but they are super light, finished to a high polish and functional as hell.

Get more info at their website:www.Arundelbike.com