When you’re in a bike battle with Colnago, it’s best to fight pasta with pasta, so to see how the new World Champs Edition C50 stacks up, we thought we would stand it next to the tried and tested C40 and see if the hoopla is all it’s cracked up to be…

So there I am taking pics side by side, just as the 50 was freshly minted (thanks Dan and Cale), when along comes a riding buddy on his self-purchased early Christmas present who looks over at the wall and sees the new one right next to the old.

Does he stop? Nope.

Does he slow down? Yeah, just long enough to say OH, I *!ing HATE YOU! 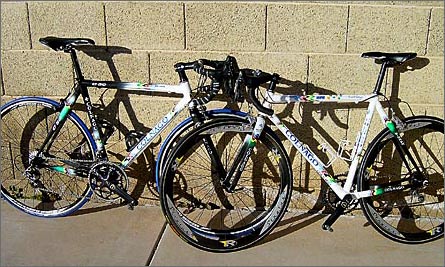 So starts the evaluation…
When you compare high end bike companies, several conclusions can be drawn about their passion for the sport and care for the products they produce simply by looking at their special edition bikes.

Colnago have done a tremendous job creating frames like the CF1, CF3 and the latest 50th Anniversary Edition from scratch to give their customers a truly special bike.

In contrast, a few of Colnago’s competitors in the last year have taken a stock frame and done little more than add a few stickers of old riders or changed the clear coat color. These companies then add a few tweaked parts and think that because they sell the unit for double or triple the cost of the stock bike, it qualifies as “special”. What is funny is that both the manufacturers I am thinking of can’t even be bothered to make these bikes in more than a couple sizes, because the Standard frames that they masquerade as “special” are built in only a few sizes to cut corners in the first place. (If you shelled out for one of these, I didn’t mean to offend you!… Sucker.) 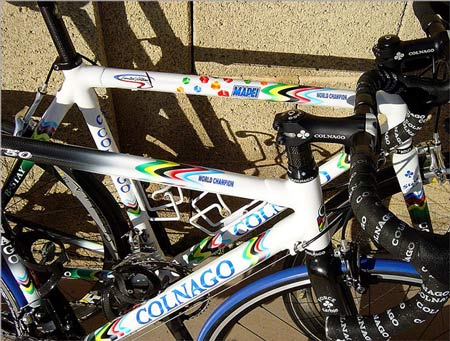 To me, it’s a testament to Colnago’s effort to do something truly special, and that commitment to offer something special shows in their stock frames as well.

Colnago’s C40 has been widely regarded as the frame to have. There are very few people who are not fans of the Colnago line and the C40 in particular. For each person that wouldn’t want one, there are a hundred that would. The C40 has been Colnago’s World-Beater. It simply gave people more of the things they want in a frame, while sacrificing less. It is first and foremost a frame that you can ride fast for long distances and do so comfortably. It is a nasty combination of Paris-Roubaix toughness and feather weight in a vibration damping material. It has Colnago’s sense of tradition in look and was designed well enough that only minor changes were needed for years. Only recently have competitors like Kuota, Argon18 and Giant begun to use more of the capacity of Carbon Fiber to build what are turning out to be the Ultimate bikes to have, so Colnago didn’t need to do much to stay ahead of the game, but this year they made enough of a change to bring on the next number…

From 40 To 50
At first glance, you won’t notice the changes from the 40 to the 50. The cleanly shaped top and down tubes, the smooth integration of tube into Lug is all classic Colnago. What you can’t see is what lies beneath the surface – and that is a new Higher Modulus Carbon that allows for a larger diameter Top and Down Tube (By about 12%). Side by side you can see the tubes are larger and it’s to address the only weak spot I thought my C40 had and that was that it needed a bit more stiffness. They increased tube size all over the bike (except the B-stay area) and did it substantially, but the frame weight is only @ 15 Grams heavier thanks to the new Carbon used. 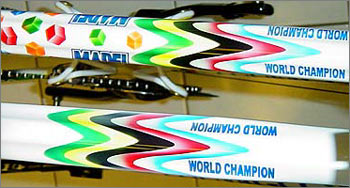 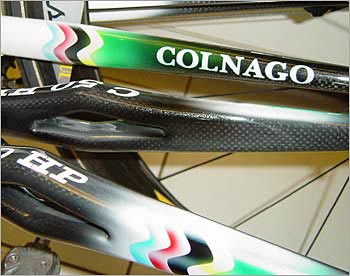 Colnago have finally gone from a 1 inch to a 1.125 headset as well, so the head tube and lug are larger (and stiffer). They remain true to function though staying with a more traditional threadless headset. But unfortunately at time of test they only have the Force Carbon Fork available in the 1 and 1/8th size. 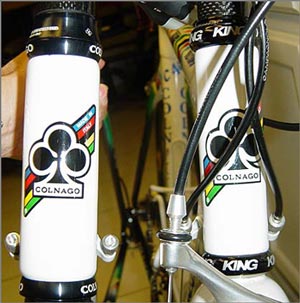 So let’s get to it!
We tried keeping the Bikes “apples to apples”. The saddle stays the same in the Selle Italia Prolink Trans AM. The Seat post is Colnago’s and they did a slightly better job with the clamp. It has smoother sides now, but it’s still a proprietary size (damn it…) and is also still features the “one easy bolt / one pain in the ass bolt” adjustment system. Old or new, they are secure, comfortable and nice looking. 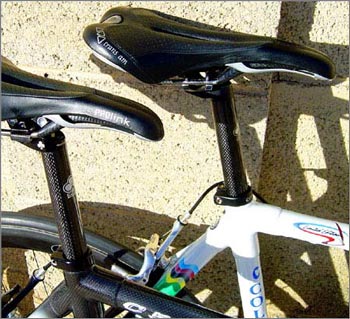 Unfortunately we couldn’t come up with a 2003 Campy record set, so we had to run the 2004 set which differs in ways we can’t tell, but looks flashier. The Cranks are FSA of course, as their Team Issue set is dollar for dollar and gram for gram better than their competition (Sorry Campy and Colnago…). Pedals are Speedplay Ti. 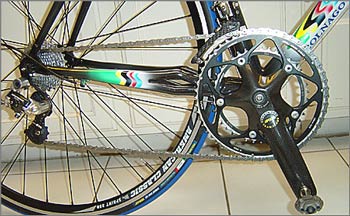 Bars were the standard 3t Prima 199’s and the stem was Colnago’s home badged (a little stouter on the C50 with 4 bolts vs. two…). For the Wheels we stuck with swapping back and fourth between the very nice and light Reynolds Stratus Tubulars and the American Classics Very Nice and light 350 Clinchers (Clincher Tires were Veloflex from Wisecyclebuys.com and Tubulars were from Tufo). We rode each bike one after the other with the same wheels so as not to let the most important component sway the test…

So what’s the difference?
For the Record, 19 high end bikes have passed between my legs in the last few years while the C40 has stayed. Not for any other reason but that I can ride it forever and never feel bad. But if I had to comment I would say… It is the perfect Geometry for me with the bars where they should be, the seat angle is nice and head tube is laid back enough to where it is never twitchy. It is also lighter than most. It’s a little stiffer than a lot available at this weight. Carbon Fiber done this well basically has no fatigue life, meaning you can ride it for a very very long time (much longer than most of the super light but throw it away after a season metal on the market).

It has a Stop you dead in your tracks paint job that nobody has come close to (although the Pinarello Green Jersey bike I had was close and certainly tougher to come by as there are only three in the USA). And I hate to admit it, but the fact that no other bike finish has carried the wow factor for more than a month or two while the Worlds C40 has carried it for a few years does have its place in an evaluation. And you need to know how nice the 40 is for the purposes of the following comparison.

Comfort: Colnago say the rear end is 5% more flexible vertically while also being 3.5% stiffer. The new C50 is certainly as comfortable as the C40. That means it is top 5% of any bike to come through here. Until something else comes along that is leaps and bounds better, the C40 is the comfort benchmark that all the bikes have to shoot for.

Geometry: The 50 is the same as the 40 so the Geometry is still basically a custom fit for me (who cares about you…). It is a relaxed, ride for hours without worry type of comfort which is one of the main reasons so many pro’s stick with it. I have a new habbit of picking out which bikes several pro’s ride when they are done being paid to ride them, and Colnago winds up as the bike in lots of cases…

Finish: is another work of art for the C50 and, while I like the C40 better (with the Mapei Logo and cubes and Oscar Friere’s Signature and the bright white), my wife says less White and more Carbon makes the 50 look “newer” and “it will match more clothes”….

Ride: Both are Pillow soft. Manufacturers that can’t pull off a ride this stable, quiet and smooth call the feel “dead”. Funny, because dead or asleep is what my hands and ass feel after getting jittered about on most other materials besides Carbon, and this is great Carbon even among Good Carbon. Silky smooth and very stable. Ride all day and Play all night… Sound Italian to you?

Stiffness: This was the one thing that made the C40 a second choice for shorter distance performance like 30 minute or short track Crits or the shorter duration races that are normal in the USA. I know Colnago say that the rear is 3.5% less flexy, but they don’t comment on what the larger head, top and down tubes do. There is also the factor of the heavier (not by a lot though) and probably stiffer front fork to consider. With all that in play, the 50 feels far more than 3.5% better in the flex department. It is a larger improvement in stiffness than the 5% figure is better comfort, as both bikes feel comparably comfortable, but the C50 has more juice. Honestly, the Kuota Khan had become my new leader in the combined area of comfort AND stiffness but the C50’s performance means my next test needs to be loading the same group onto the Kuota and riding them one after the other with the same wheels to get a better look (yeah, life’s pretty rough here at PEZ…). No matter what the outcome is though, I am talking about the very best available in what a Bicycle can be.

So all in all the C50 is a little nicer than the C40. It’s not hugely better, but the performance boost is noticeable and, with the new tubes, head and stays, it warrants a new number. That seems like light praise for the C50 only because the C40 is so sweet! It’s like determining whether or not 20 nights would be better than 18 with an enamored Angelina Jolie when just one is more than most of us deserve. Colnago have been at or near the very top on just about any list because they put more of what people want in Bicycles. Passion and Tradition live in the C50 and do so in massive quantities.

You can hit the guys at Trailtir-USA.com for a where to buy link.

Where to Get ‘Em
CBIKE.com