Campagnolo have launched their anticipated Disc group tech in multiple group levels and with the feature set that the industry seemed to have settled on as the best way forward.

Built onto custom frames from Sarto, the new group sets on offer were right at home on the rolling hills, steep climbs and fairly blistering descents around Gran Canaria… 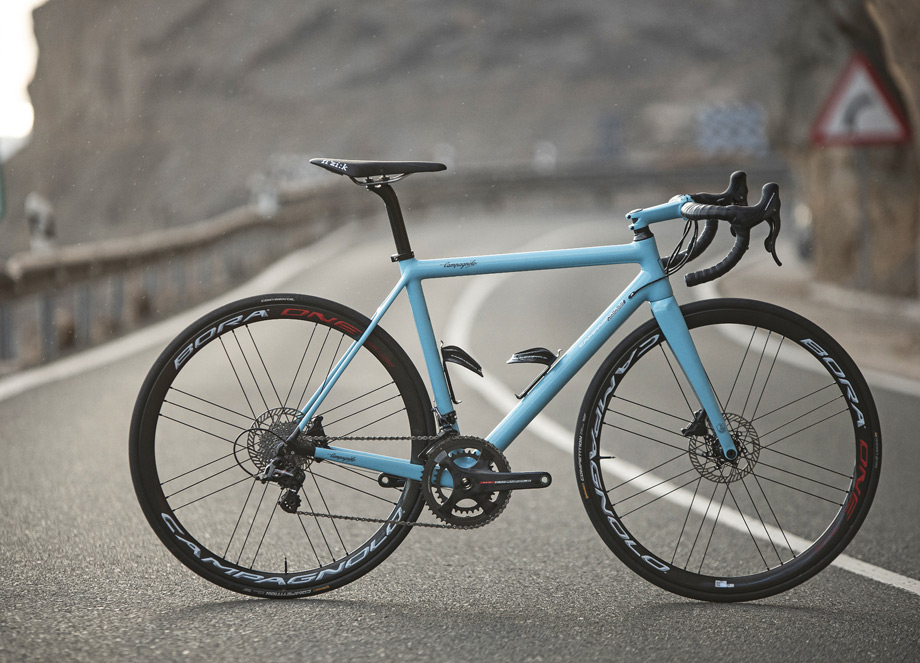 This is about Disc

As for Campagnolo’s Disc launch timing, I’ve heard folks chirping about them being “late”…

But then I immediately think, even if you dismiss a competitors full line recall of hydro road brakes, you still have spacing, QR versus through axle, through axle sizes and brake mounting standards that have all gone through multiple changes in the relatively short time since the first road Hydro Disc sets hit the pavement.

And then you have to consider the UCI (which should be short for “Union of the Critically Inept” where tech standards are concerned) and their panic-start/stop/starting disc tech based on a couple of shoddy injury reports. All of this has combined to change multiple aspects of road disc tech and the standards used by frame makers to implement what is very simply a better performing product.

Campagnolo started their work on disc brakes a lot further back than most people realize. They had already been working on the tech for a couple of years when the UCI decided to allow a disc brake test phase.

When the UCI gave the green light, Campagnolo were standing on the start line right next to their competitors. 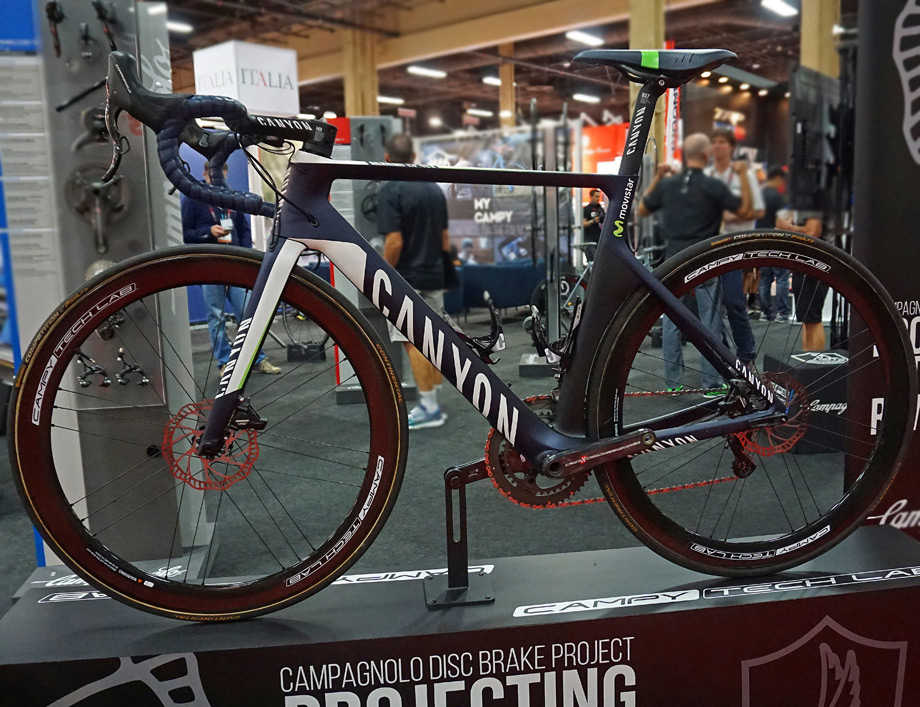 Being ready for that first pro peloton trial makes sense given that Campy consistently use the highly pressurized environment of Pro Tour racing and training to test new platforms over the years.

Despite the UCI now waffling on what to do, Campagnolo gathered enough pro team info and logged enough testing millage that they feel like they’re ready.

After spending a day dropping down the absolutely no-shit STEEP terrain in Gran Canaria that fully taxed the system, I think Campagnolo are ready as well… 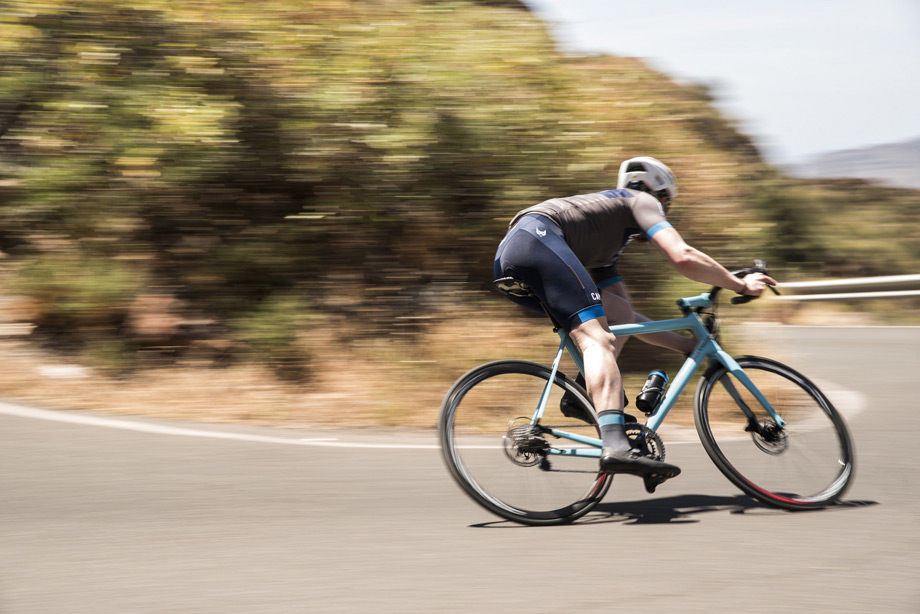 While I usually go into geek-depth detail about hardware itself (and Campagnolo provided volumes of technical info), I think I’ll just give you my impressions as they occurred to me while riding the groups and follow with a bit of info relative to the feelings…

1: The levers look a little bigger but they’re really not much different in size and there’s no perceptible difference in how they feel in your hands. 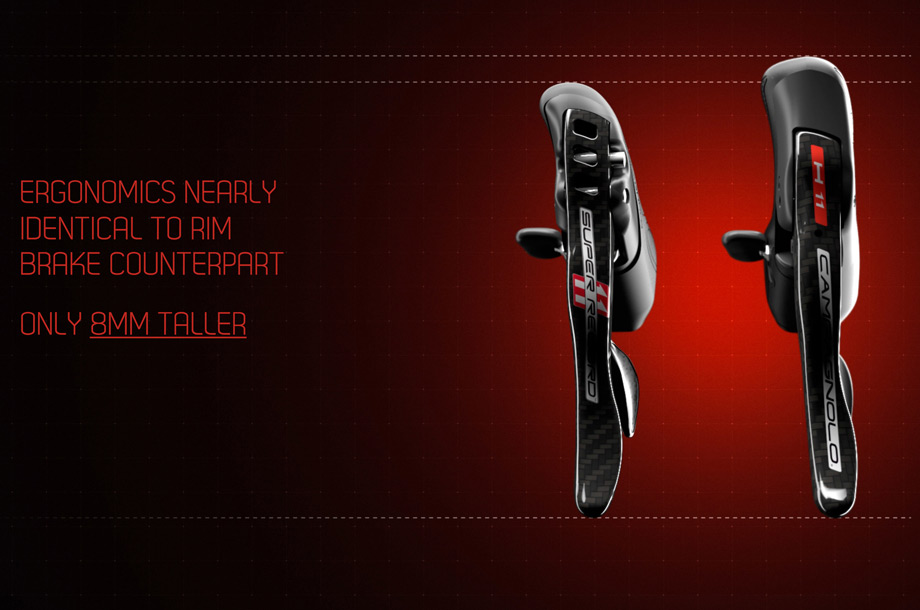 You can see some difference in lever shape, but Campagnolo did a very good job of designing a very compact master cyl (that is also the same unit for left or right levers). It left them with enough room to keep the curved surfaces that are so hand friendly and do so without creating any more perceptible overall bulk when your hands are in typical braking position. Riding this back to back with their traditional cable brake levers left me feeling like there was no difference except that you have a bit better hand position if you’re one of those folks that rides with your palms gripping the tops of the hoods.

2: The initial bite is less abrupt than other systems

It’s not “soft” or “vague”, you can feel the brakes engage, but other systems can be a little abrupt and Campy’s system just offers consistent feel without that initial punch to a degree that can shift your balance or upset your position.

3: The modulation and power are very good and very consistent

I mention that there is an even feel at the start of the lever action versus being abrupt, but the modulation stays very smooth. The more you squeeze, the more power gets applied, but it’s very even, meaning that the brakes don’t multiply your force artificially for you (which makes it harder to modulate because the force increases more than your effort is telling it too.

This even modulation manifested itself in the group of riders at the launch in that I witnessed only two short brake lock-ups despite riders being on very steep, unfamiliar terrain with a lot of blind corners.

I was positive I had overcooked one of the more aggressive / steep / switch back curves but I just kept applying tiny bits of pressure as I entered the turn (and as a car was coming up the hill directly at me on a road that was very very NOT wide). I was able to feel and hear the back wheel starting to lose traction and I modulated my way out of it with no skid. This was a blind button-hook 180 at the bottom of a 12-ish degree plus drop and I corrected my line without issue (though not without very very slightly pissing myself). 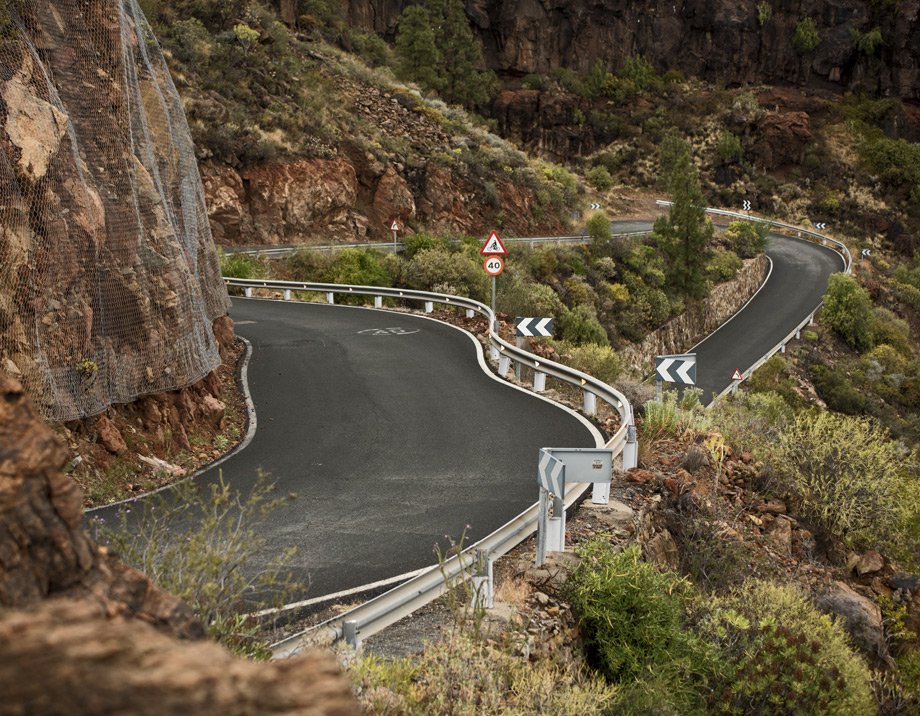 Speaking of being able to hear the tires / traction…

4: There wasn’t a hint of Brake Squeal.

Campy have done a couple things a little different in their piston design, their return spring and their pad compound and construction that address several things in addition to allowing the system to be very quiet.

The 22mm pistons are made from Phenolic Resin which doesn’t heat up as much (keeping pad heat away from the fluid is a good thing) and retains it’s shape well. It’s also less resonant (and lighter) than metal or mostly metal pistons. 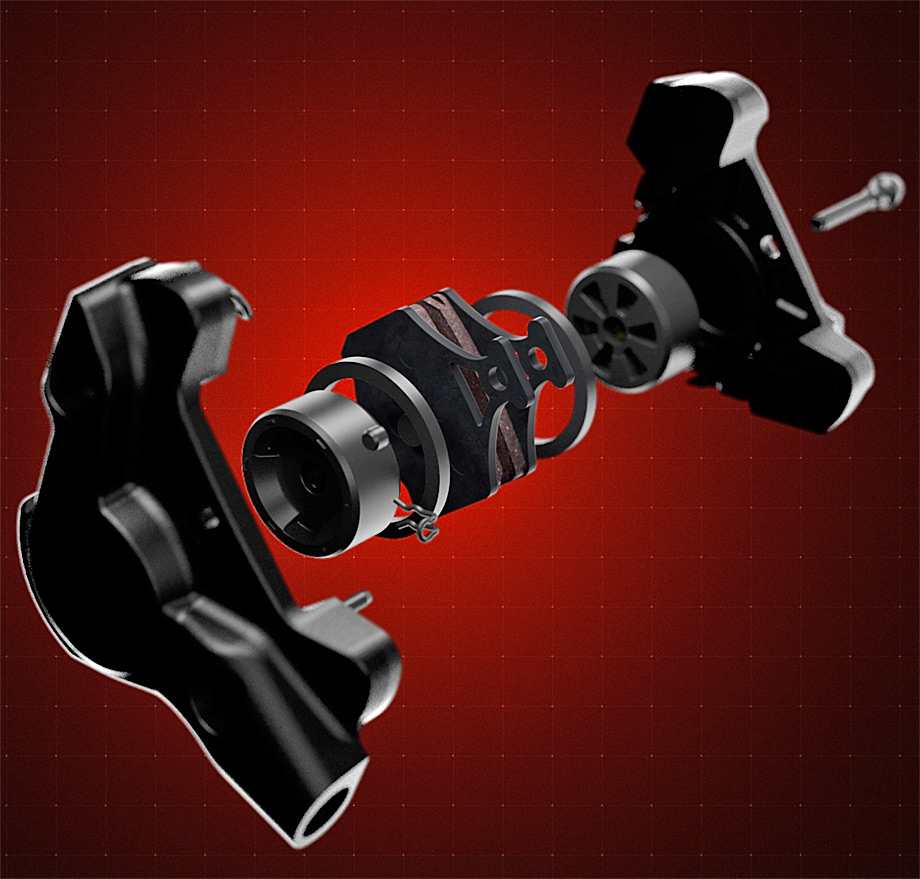 The return springs are not really springs… The piston return (that pulls the pads back away from the rotor when you let off the brakes) is Magnetic. This means it won’t wear out like metal springs, it’s actually faster return than springs and the system performs more consistently over time.

Ah, and the pad clearance to the rotor is equal to the widest in the industry…

The organic resin pad has a layer behind it to damp vibration. The pad itself is a great match with the rotor as the braking feel proved, but it’s a thin layer of “unicorn foreskin*” that sits between the pad and its Steel backing plate that helps kill the vibration / resonating, helping to prevent squeal.
(*thanks to Peloton’s Ben Edwards for the proper technical term) 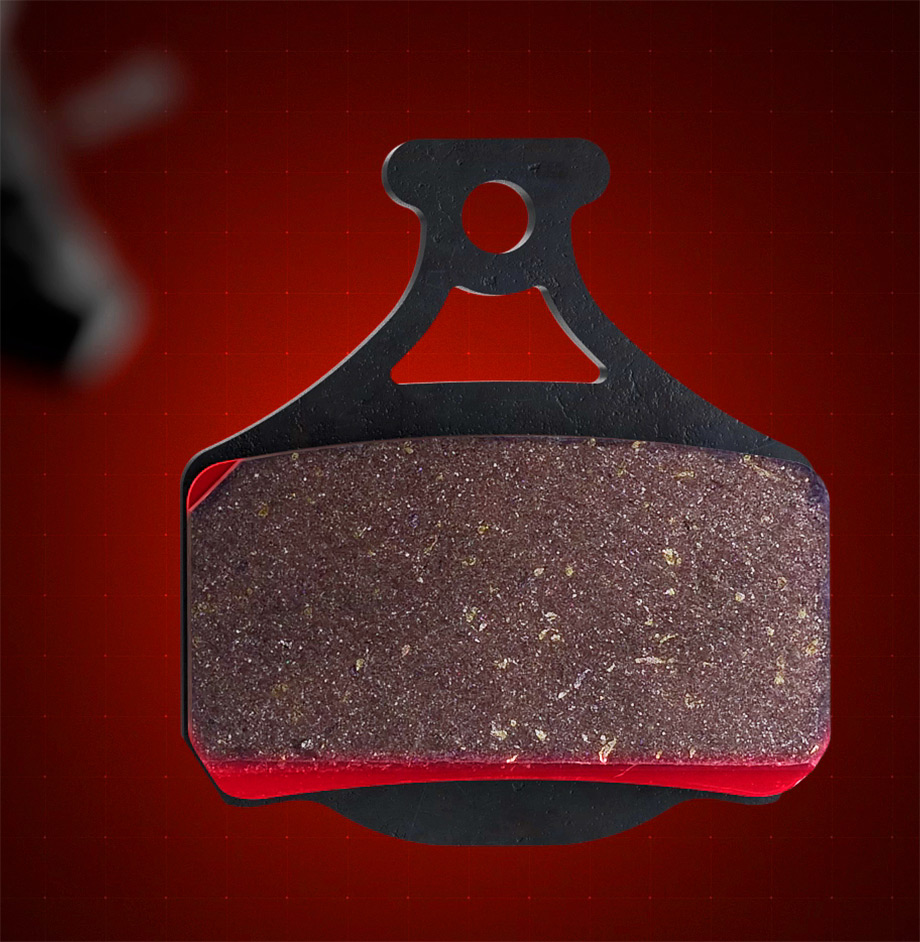 This is a patented anti-vibe, noise reduction solution and it works very well…

This noise reduction worked when we started the ride and everything was cold, and it worked very well on the nasty / long descents… About the only thing that didn’t work out well was one of our Media brethren (a very nice Spanish speaking Japanese guy) who decided it would be fun to poor energy drink on a rotor so hot that it flash boiled and bonded the energy drink to the rotor and pads (and actually splattered onto my leg)… This did create a new surface that has some noise before cleaning. 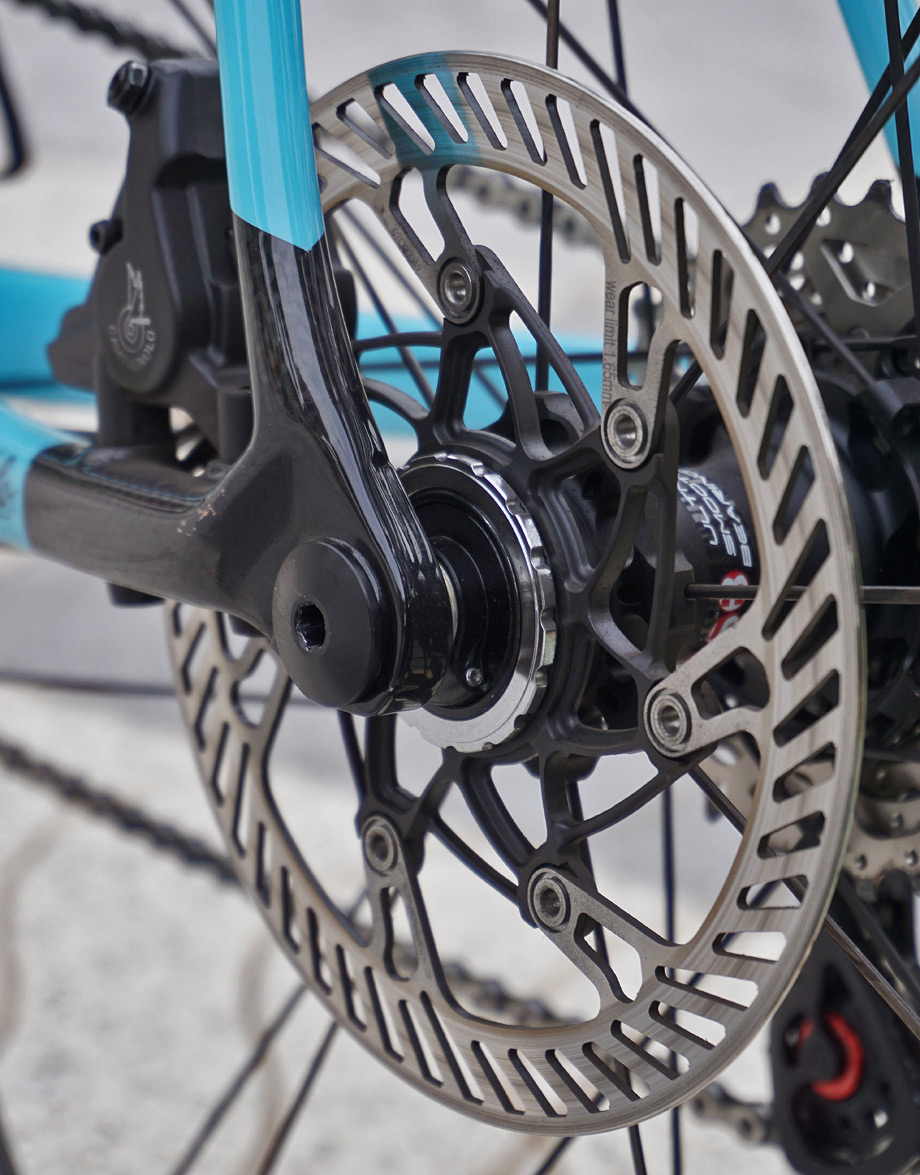 Using steel versus Alu allows for a bit more solid / durable structure. I’m going to guess that, if properly treated, it also allows for more aggressive vent cutting with less chance for warping / distortion than Alu.

6: Maintaining and setting these up should be fairly straight forward

Campy have designed the levers with a top mounted bleed port which makes sense as bubbles like to find the top of fluid systems. 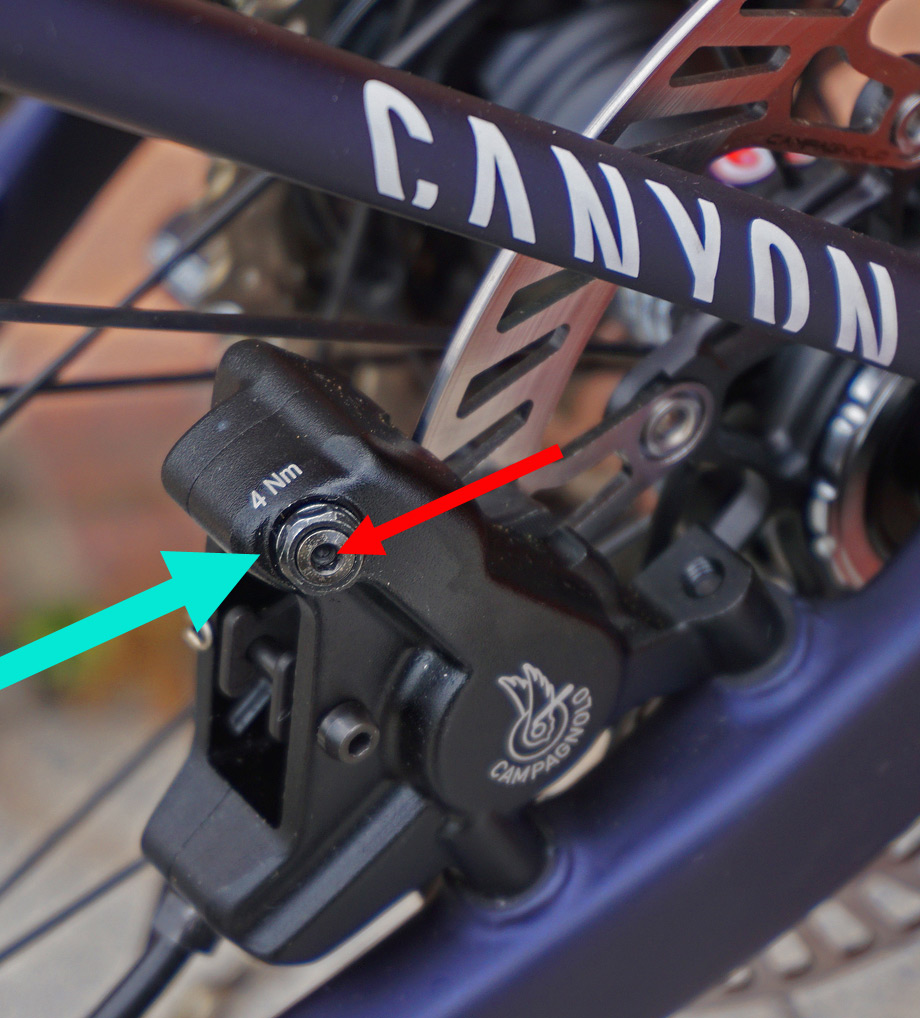 The Caliper bodies are forged Aluminum
You’ll first remove the small hex bolt on the inside (Red). Then you’ll screw in Campy’s bleed line. Once the line is in, you’ll loosen the outside bolt and that will allow the fluid to flow. 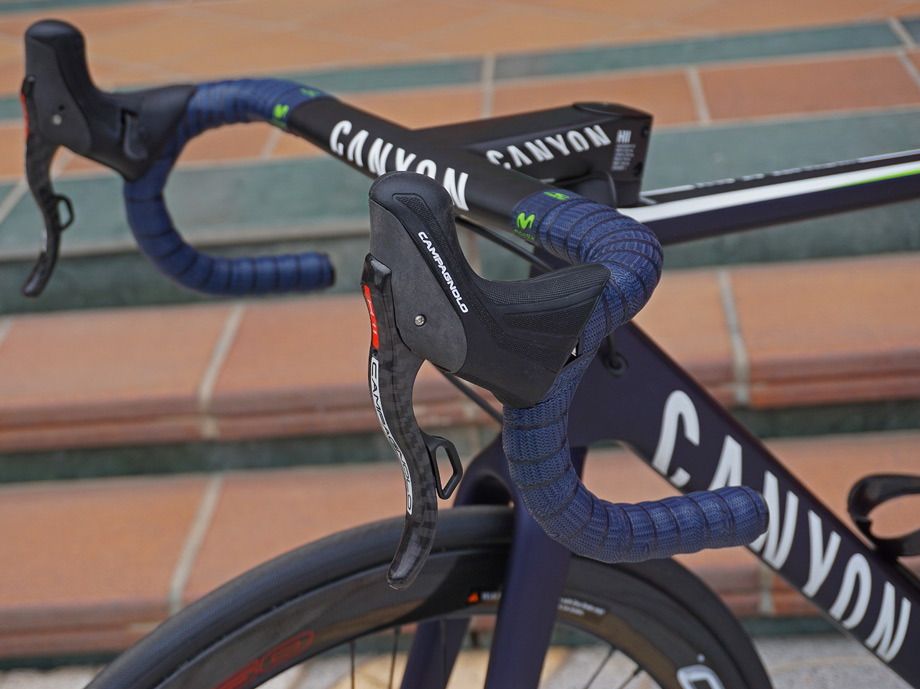 Shifting is unchanged… The different group sets all maintain the shifting patterns and ergonomics of their cable / rim brake counterparts, but there are some changes to the rear derailleur and cranks to optimize for disc brakes.

7: Frame manufacturers are now designing the very latest frames to be optimized for Disc

At the cranks (and lining up for the rear end) Campy have allowed for this by pushing the chain rings out (away from the frame center line) to follow the rear spacing. They’ve done this without pushing out the q factor. You can notice that the chain rings are slightly closer to the crank arm but it’s a slight difference. 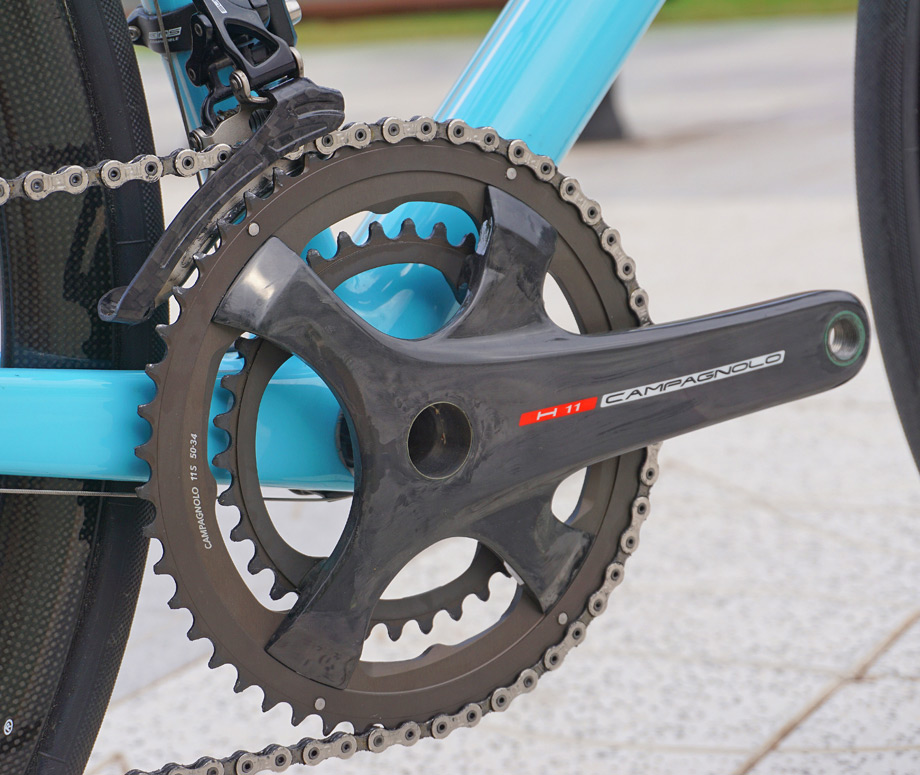 At the rear derailleur the only change visible to my eyes is a different logo, but the geometry here is slightly different as well. That said, you can run non disc specific rear derailleurs and adjust them to suite. 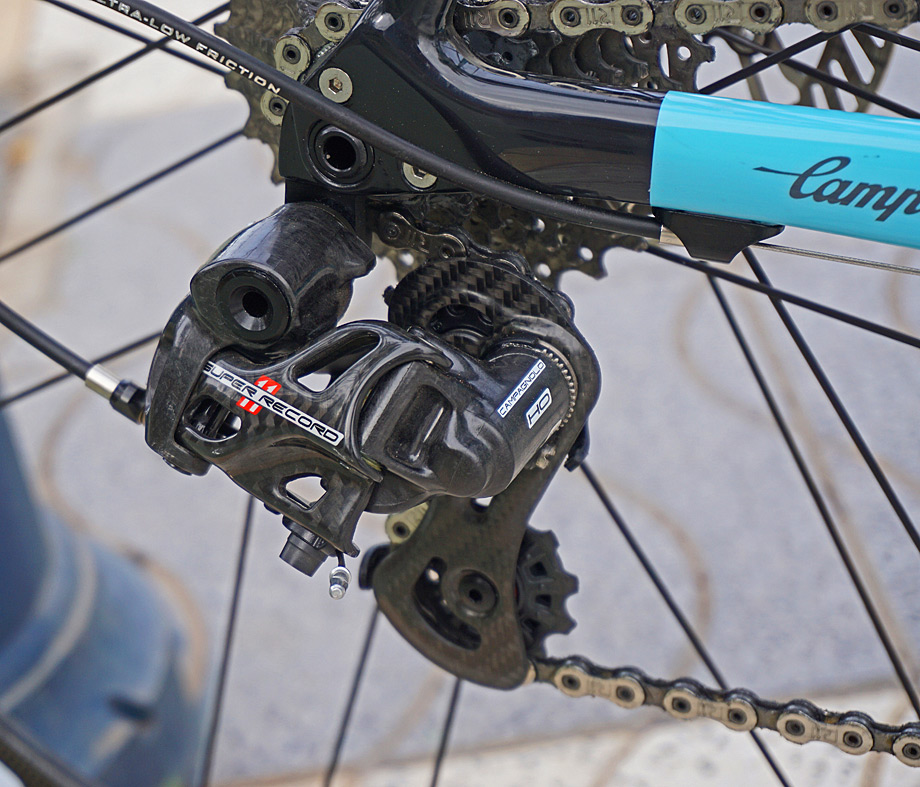 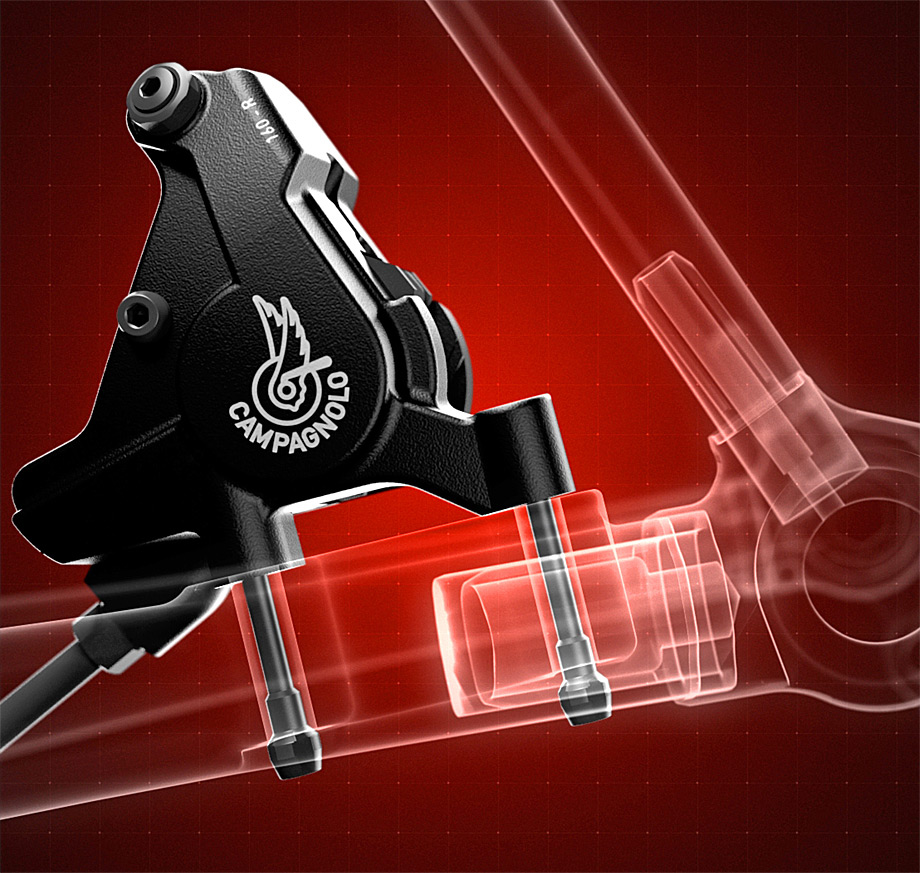 Campagnolo simply don’t want anything getting in the way of performance and adapters / bridges etc represent the capacity for misalignment and a less rigid system. Most frame builders have gone toward flat mounting and it’s the best option to date, so Campagnolo are only offering this solution (they do have several bolt sizes to suite different frames).

At days end, it’s mostly about function with Hydro braking because once these systems are installed correctly, there’s generally very else to fuss over.

Campagnolo’s rotor and pad construction and materials choices have added up to modulation that is at least on par and an argument can be made that they’re better than the current best in the business.

Because all disc systems can lock up your front and rear wheels with relative ease, modulation / rider control of that force is the primary performance benchmark for all disc systems. Campy have done what they needed to in order to go head to head with the best on offer. I forgot to mention that, along with this very good modulation comes the ability to choose two different engagement points for the levers in order to set the initial bite point (the amount of lever travel required before the pads contact the rotors and start braking) on the brakes as well. This lets you fine tune the squeeze and also changes the force applied very slightly but the modulation is very similar.

Campagnolo’s noise damping is, under the conditions of this launch (extreme braking / long descents / heat albeit dry), the best in the industry right now. 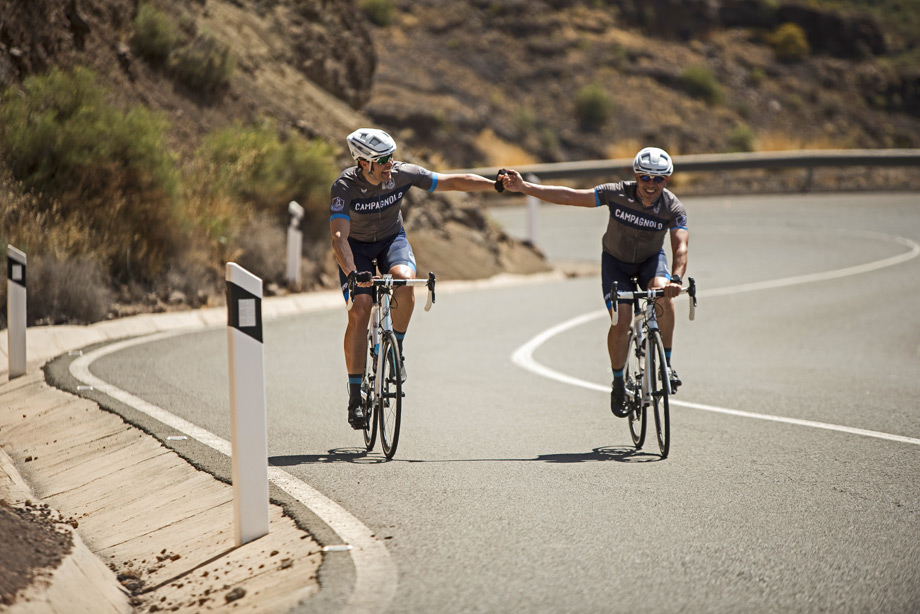 Disc Group availability will be roughly June for Potenza as the first group to be launched. Further details coming for remaining group sets but they should be landing over the following months. The groups will come with a bleed kit, rotors, screws and 250ml of fluid.

More to come from Campy’s Launch, as they also have new disc and standard wheels as well as an all new Centaur level group.

You can see more details on all of the new products launched Campagnolo.com