Carnac have been a top brand for several years and for 2011 they bring a new twist on closure systems with the adjustable, flexible magnetic closure system (MCS).

There have been a lot of different attempts to build a better shoe string over the past several years. 2 straps… 3, 4 straps, a buckle and 2 straps, cables… Say one thing about the cycling industry, there are no lack of attempts at being different.

Carnac (distributed in North America by Sinclair Imports) have been making very good shoes for a while. The brand has been around since 1949 and started differentiating itself in the 80’s as a company quick to see that clipless pedals might stick around. They were one of the first with a synthetic sole and in-set bolts to take on cleats.

But while shoes themselves have given us a million new looks and buckles, straps and BOA have been refined, there really hasn’t been a new “format” of closure system for a while. Enter MCS on the new Carnac Attraction… 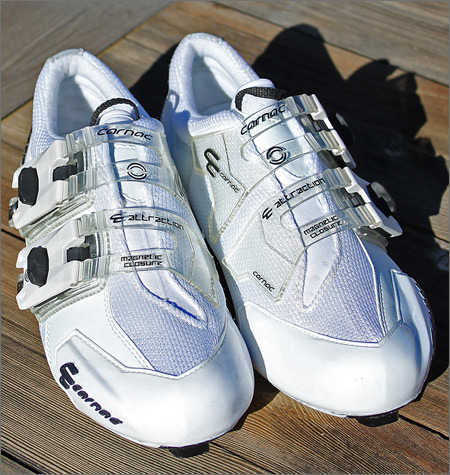 The Attractions use a stretchy (but firm) elastomeric as the strap material. 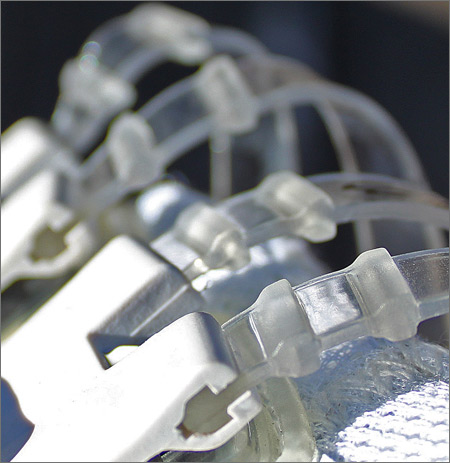 These are length adjustable by cutting the strap and leaving the appropriate little bulge in place to allow proper adjustment.

The straps themselves are attached to the side of the shoe, stitched directly to the mesh material that creates part of the upper. 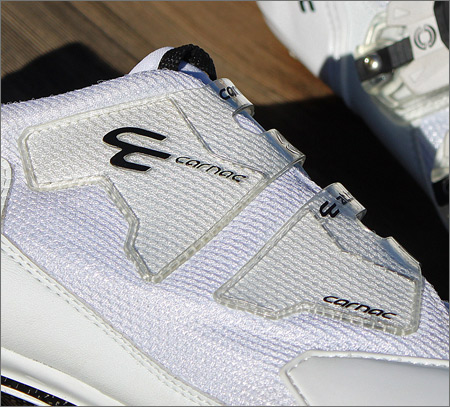 One thing I did note was that the straps themselves seemed to not line up properly at the top strap. 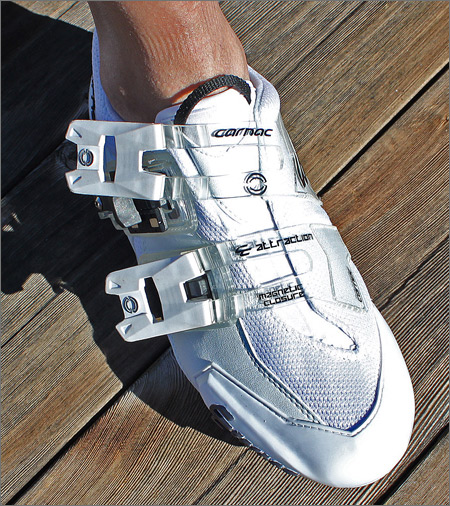 And when adjusted in to place, the upper portion of the strap was a lot more snug than the lower. It left a bit of a bulge on the lower part of the top strap. 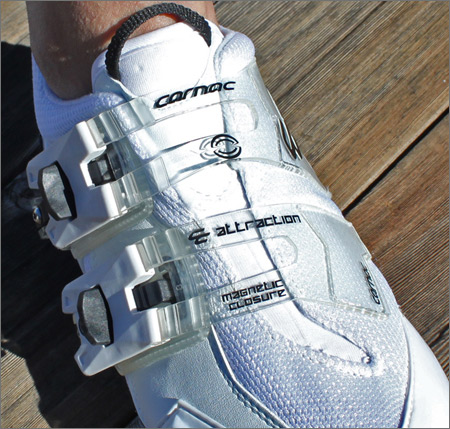 Then I pulled my head out of my butt and realized that I could trim one nub/bulge tighter on the same strap, and while it wasn’t as easy fitting the buckle back on as if the nubs were parallel, it did make the strap line up evenly and apply even pressure when snug.

Another thing that aids in making sure pressure is even is that the receiver part of the MCS buckle is made to swivel a bit. Not a lot, but enough to allow already flexible straps to sit really comfortably. 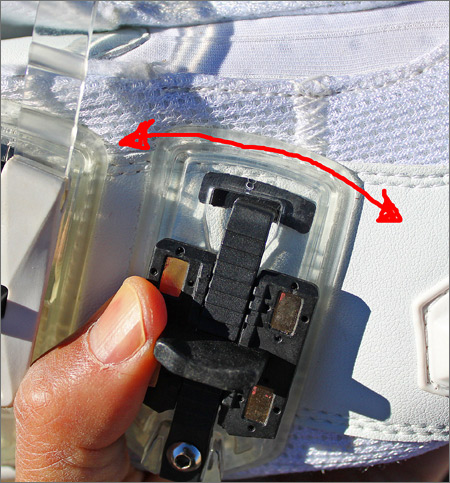 Speaking of the MCS system 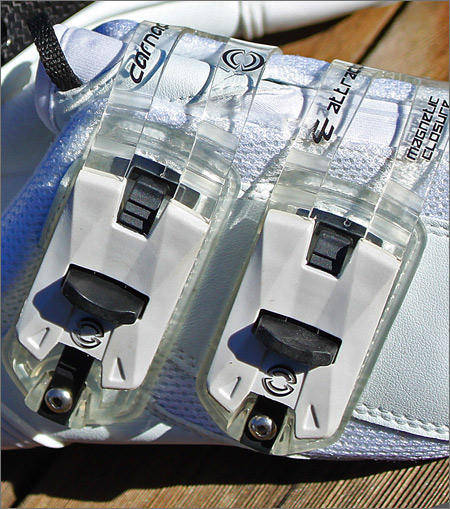 This is basically a material sandwich. Black material is the base and white is the strap holder and top part.

They’re “attracted” to one another by magnets in both. 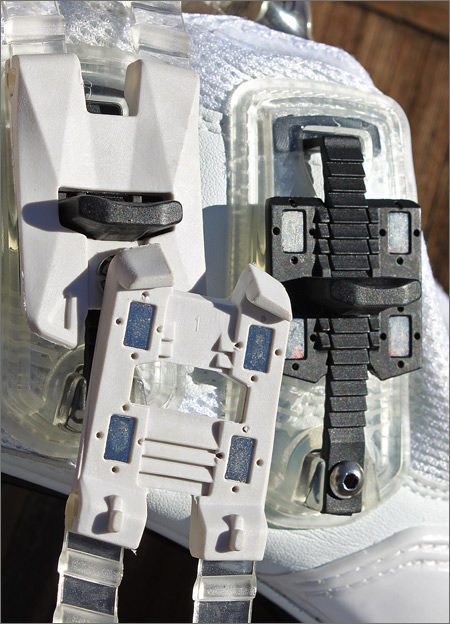 The molded shape of the parts is pretty important.

The black base is actually two parts. The red marked section is a strip that is fixed in place. The second part (marked green) gets teeth molded in the same direction but it slides up and down the fixed section. The teeth are angled away from the straps so that when the white section is attached, the straps pull up and back. That engages the teeth and holds the length adjustment in place. 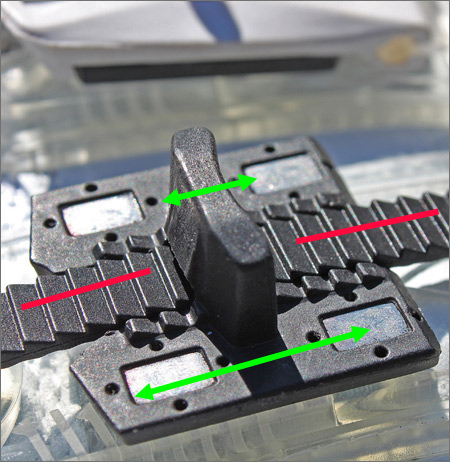 The white section slips over and attaches to the moving black section. You have to pull away and up to release. 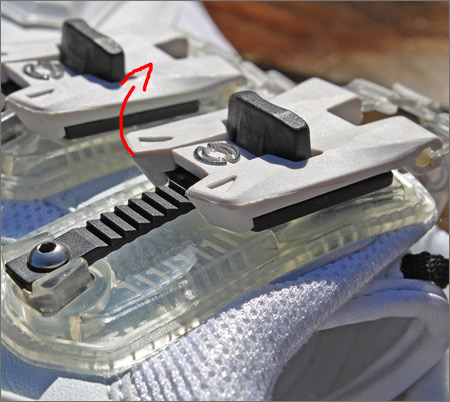 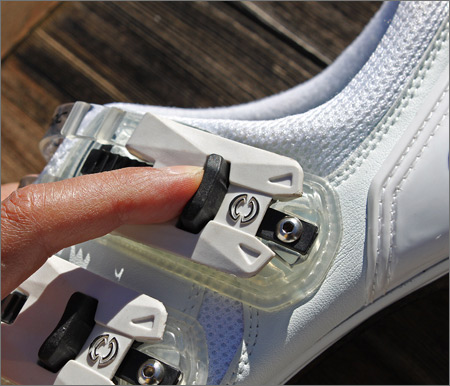 What else?
Carnac have a heck of a nice bottom. 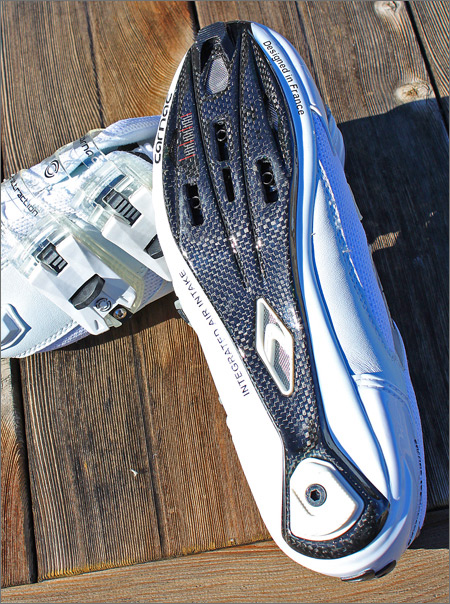 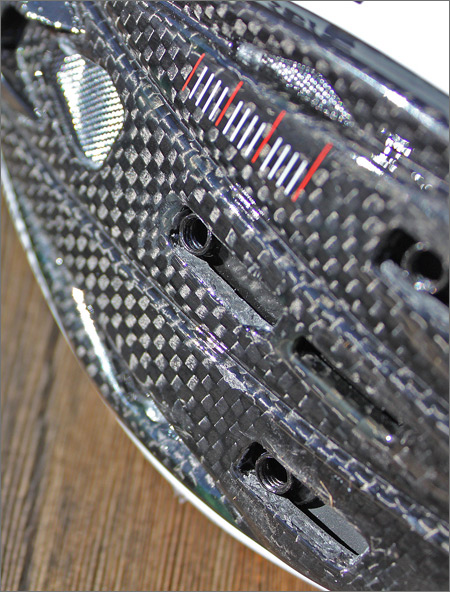 They also run ribs down the cleat section that are typical of what a maker might do for reinforcement. 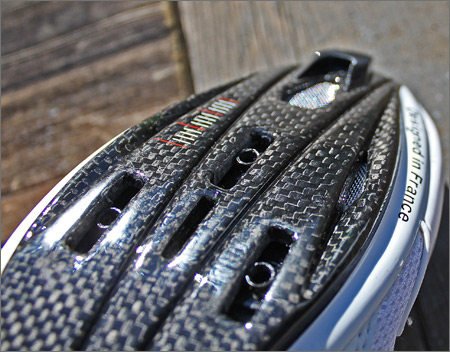 I think there’s enough material here that the ribs in the sole might be just for looks, but this then this is one of the stiffest soles around…

Both the toe section… 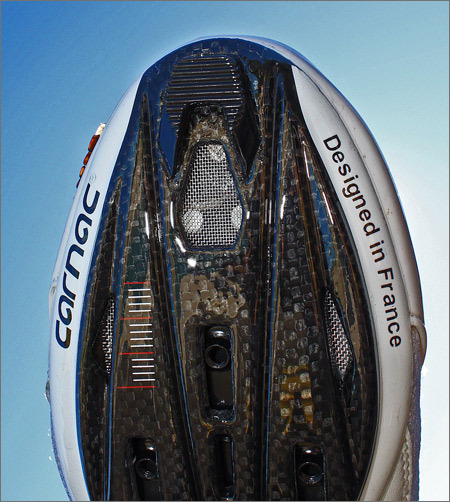 … and the arch / heel section 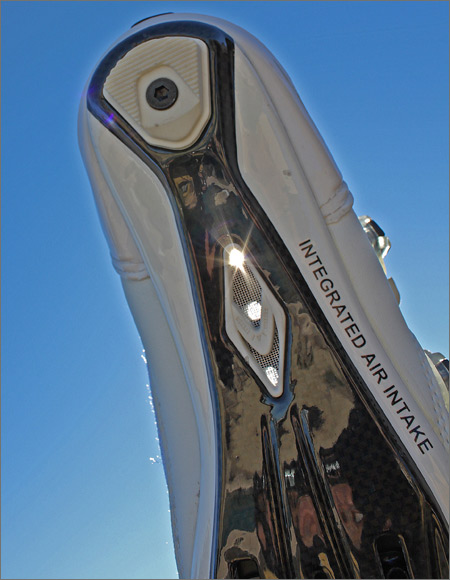 … have opened ventilation clean through the insole.

Those of you that use aftermarket insoles can do as I did and lay the Carnac’s over your own for marking and drilling. Do it when it’s cold outside and you will actually feel the venting on the bottom of your feet. That might not be for everyone but here in Arizona in the spring and summer, I’m going to like it…

The soles get heel protection that is removable and replaceable. 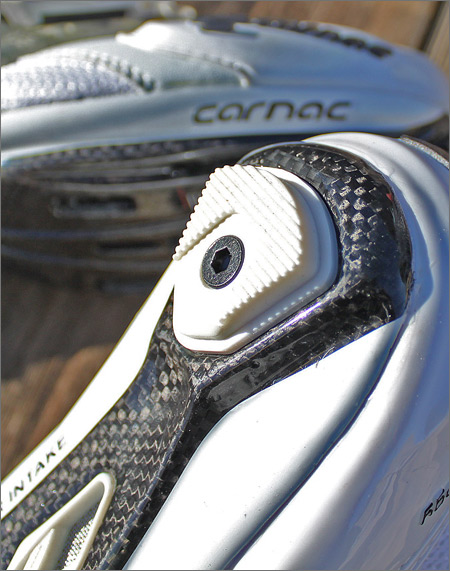 But, like a few other shoes, the toes are not made for easy removal… 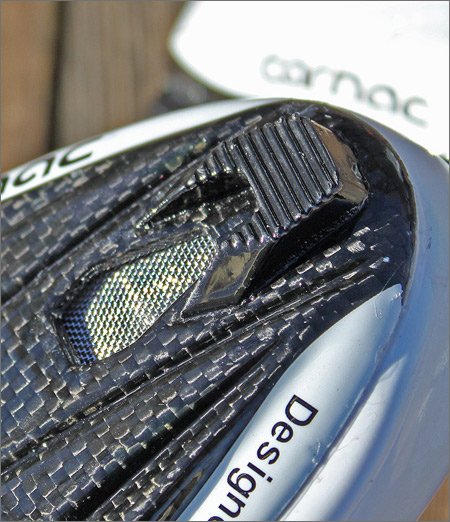 I would agree with most shoe companies that your toes get very little wear though. Not sure if it’s a big deal because while I have replaced heel rubbers, it occurred to me that I’ve only ever replaced toe rubbers on one set of shoes and frankly they didn’t need replacing. 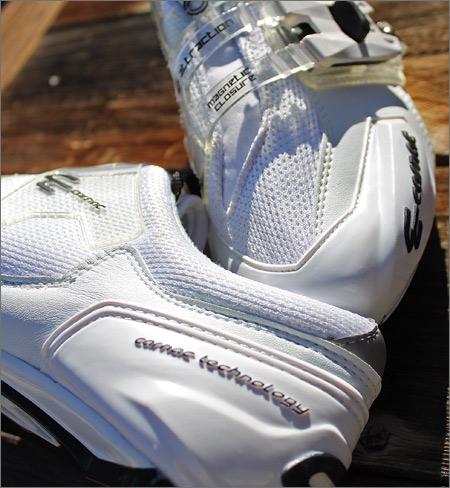 For starters I like white shoes and these are the sections that generally get scuffed and dirty. Plastic is WAY easy to clean. But it’s a trade off because mesh is WAY worse to clean than leather / pleather… Mostly these are very toe scuff friendly. I have more faith in being able to fall over in these versus most things.

And what about using them?
One thing about the new Carnac is they’re a bit more average for width than some past models I’ve tried. They still have good clearance for insoles and they’re not slim fitting, but I would call em “upper average” width now. They’re more c-d ish than the solid d+ on past shoes. I would guess that suites more people than less.

Venting is really good on the Attraction. Way too good to ride without covers even in Arizona temps. If there is a trade off for more difficult to clean mesh, it’s air flow and I’m all for that. People in colder / wetter places might like a different boot.

And what about the MCS?

I think it’s neat and once you get the hang of it, it works. But on the bike it’s not as easy to adjust as velcro or some micro-index buckle systems. I basically fully release and then push to close, but it’s not as quick as a pull and replace for velcro and some other things are easier to make the small increase or especially decrease in strap tension.

The flip side to this is that these straps are pretty damn neat. Once I figured out how I wanted the tension, I virtually never needed to make an adjustment. I figured that once 3 teeth were showing on one and 4 on the other, I was where I wanted to be.

I guess the firm flex of a rubbery strap means the shoe can expand or contract a bit with your feet and adjusting just didn’t happen after I found my way around the shoe (3 rides). That makes me feel like the real innovation here is the strap spreading nice even pressure across a slick neoprene tongue versus the MCS, but whatever. The Attractions were dang comfortable and felt very secure on my feet with no binding at all.

As for shoe covers, I did also note that some non stretching wind stopper booties and tighter fitting neoprene’s are a little tougher getting on. For super snug material or dense material booties, they may push on these buckles a bit as well (though no risk of the buckles coming loose as the pressure is in the direction that secures rather than releases them). I made the couple of sets of over shoes I had here work though and again, once these are adjusted, you’re good to go.

Sole flex is darn near zero for these.

The uppers are comfortable and I chose adjustable inserts for these versus my custom orthotics and when I have a good foot bed and good firm but comfortable uppers, I don’t mind a stiff sole. Some folks like a bit of flex over the long haul though and these might not fit that bill. Still others like solid soles and these will be up that alley.

Build quality, material quality, stitching and finish were all what you would expect from a shoe with retail at $499.

What else Carnac?
Walking Interbike this year had me stopping in to the Carnac booth for a bunch of other goodies that caught the eye… The company has been expanding and they have a pretty nice helmet and other kit bits as well. 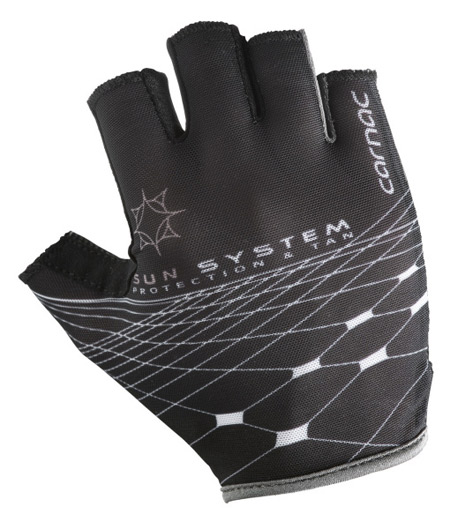 As for their new Hades helmet, like using carbon in their shoe soles, Carnac didn’t go shy on the quantity… 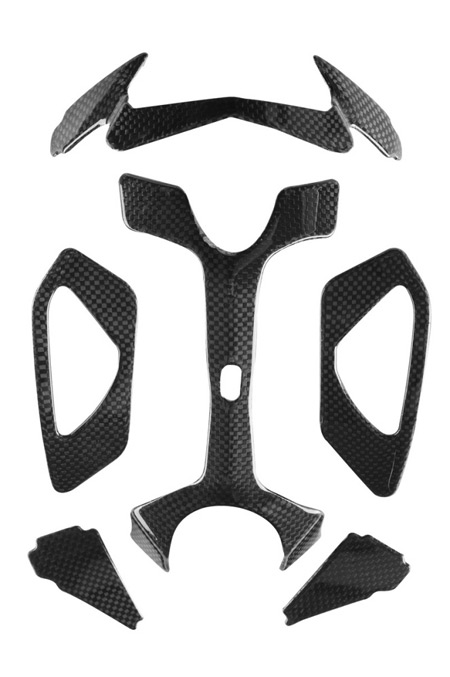 I would live to know how the thing vents with a name like Hades. Could also be right up my Arizona alley.

For more info on the Attraction and other shoes and Kit from Carnac contact Sinclair Imports.

Toolbox: How Much is Too Much?