Castelli’s new PREMIO BLACK bibshorts arrived in a slick black box, and with a written promise to be the most comfortable bibshorts for my longest rides. I matched ’em with the Classifica jersey and hit the road. Here’s my review.

WAS CREATED WITH ONE GOAL: TO BE THE MOST COMFORTABLE PERFORMANCE SHORT FOR YOUR LONGEST RIDES.

That’s a lofty promise, but one worth putting both legs into finding out if these woven bibs stand up to their billing.  I am now several rides into these bibs, and can offer up my own experience for your consideration. 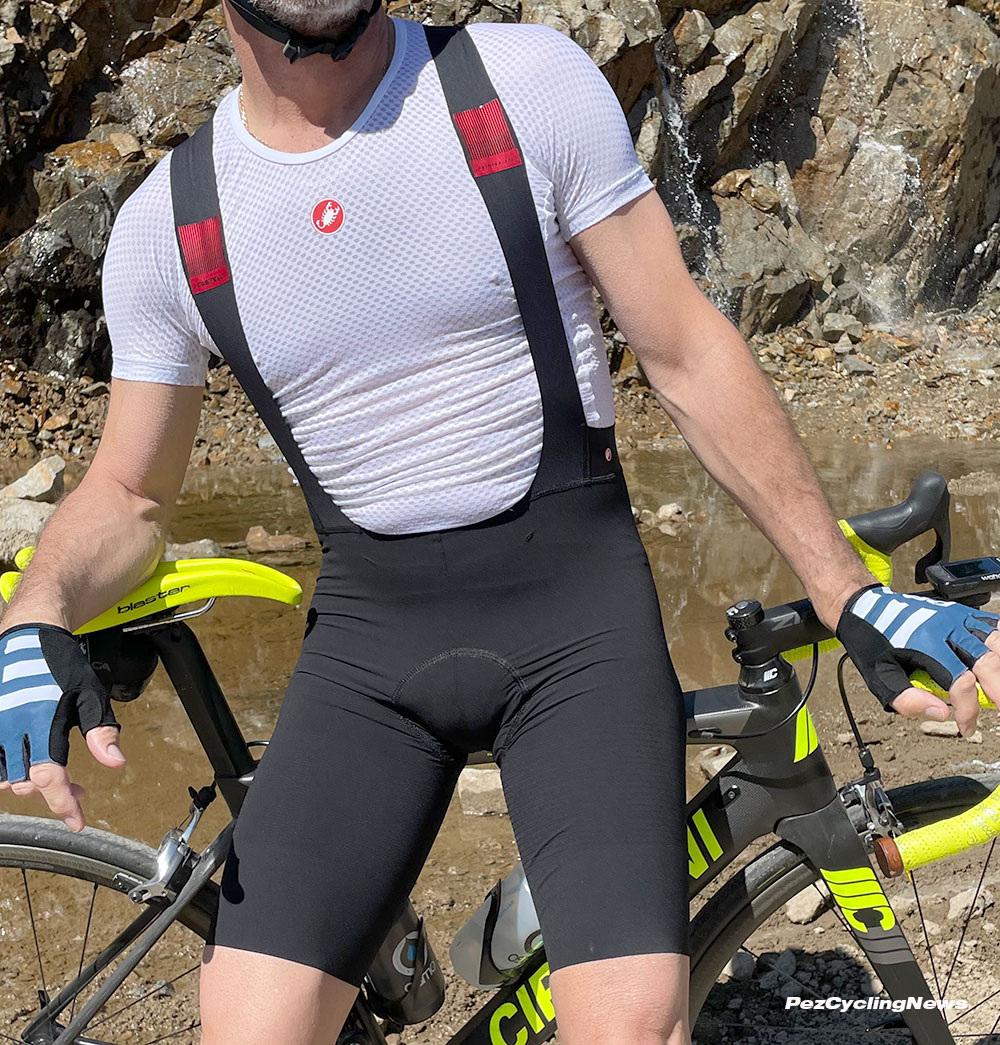 Plenty of support for your package
Outta The Box
These bibs do feel different.  Not buttery smooth, or even soft to the touch, in fact in my hand they don’t seem to hold much promise of comfort at all.   The proprietary fabric, engineered for Castelli – feels more like paper – only stretchier, and yes – softer (than paper). 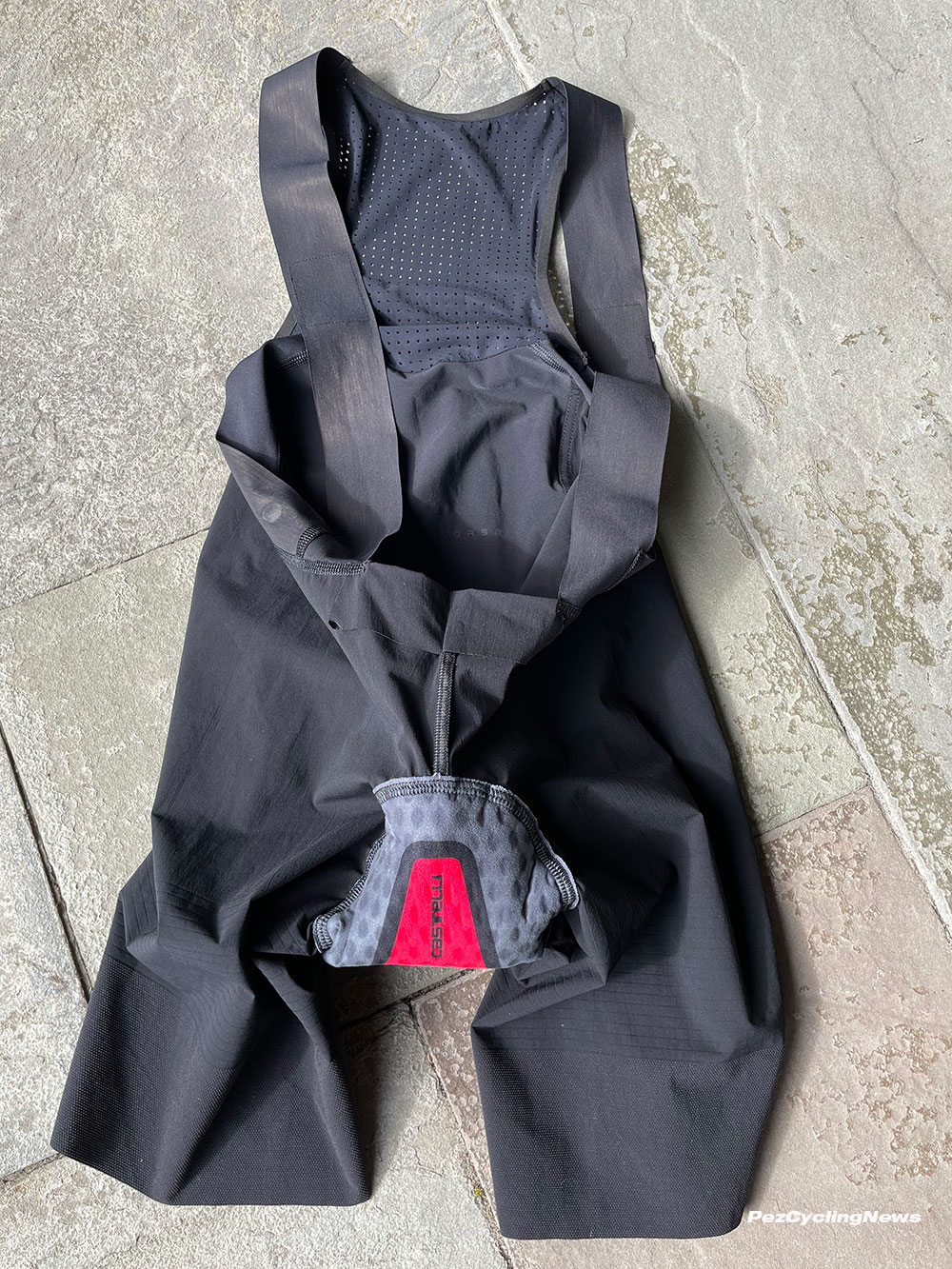 That’s because the fabric is woven instead of knitted like traditionally made cycling fabrics are.  The weave inherently resists stretching, but offers several plusses that knitting doesn’t. 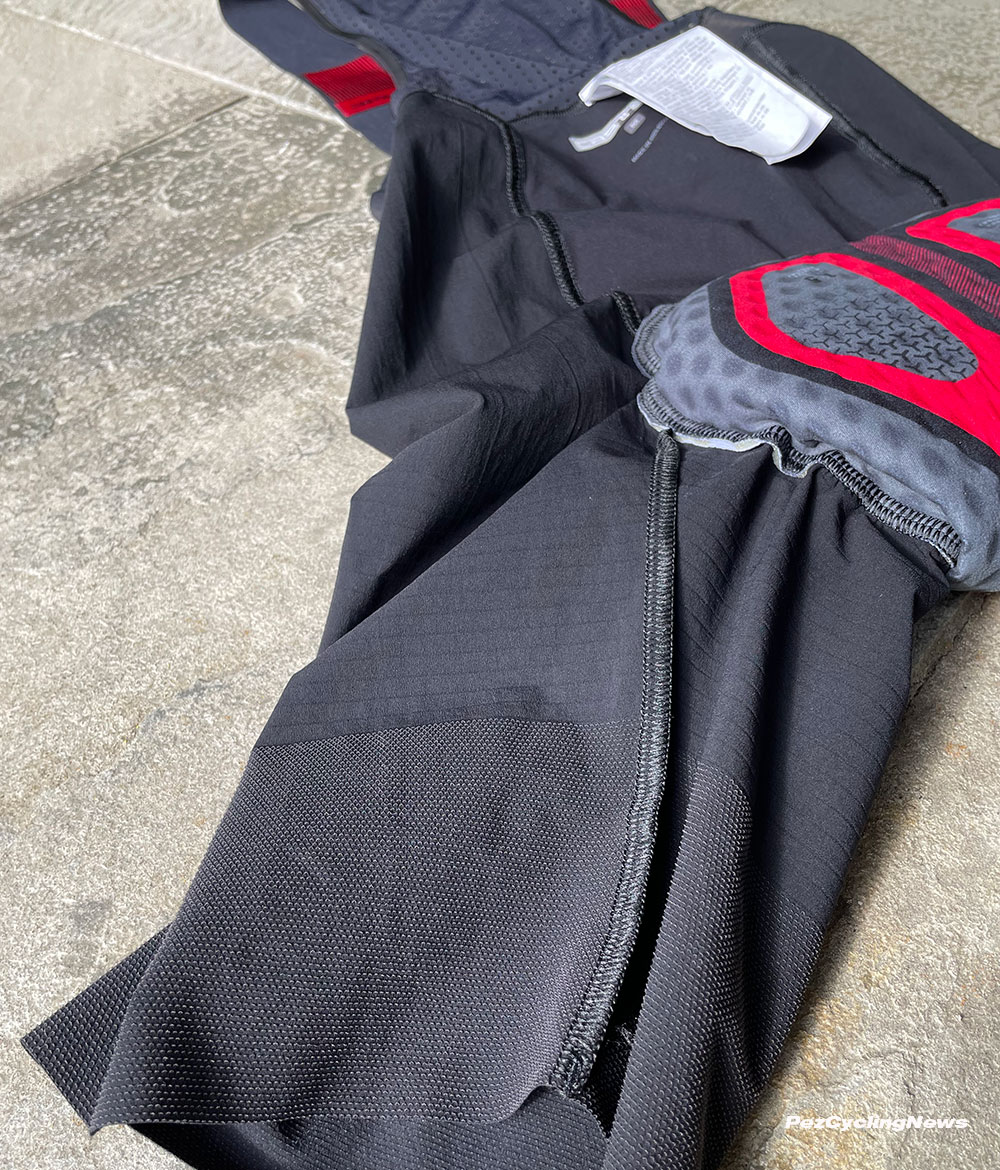 Minimalist Design
The subject of how many panels to use as been a hotly debated topic amongst short designers for years.  More panels allows for a more controlled fit by cutting and contouring these panels to fit a human shape.  But more panels also add cost, and production complexity, and rely heavily on the tailoring to ensure a proper fit, while not enough panels can compromise fit and support.

Castelli went ahead a reduced the number of panels here – so I’m borrowing a graphic from their press kit because I was genuinely surprised by how few pieces there in this garment. 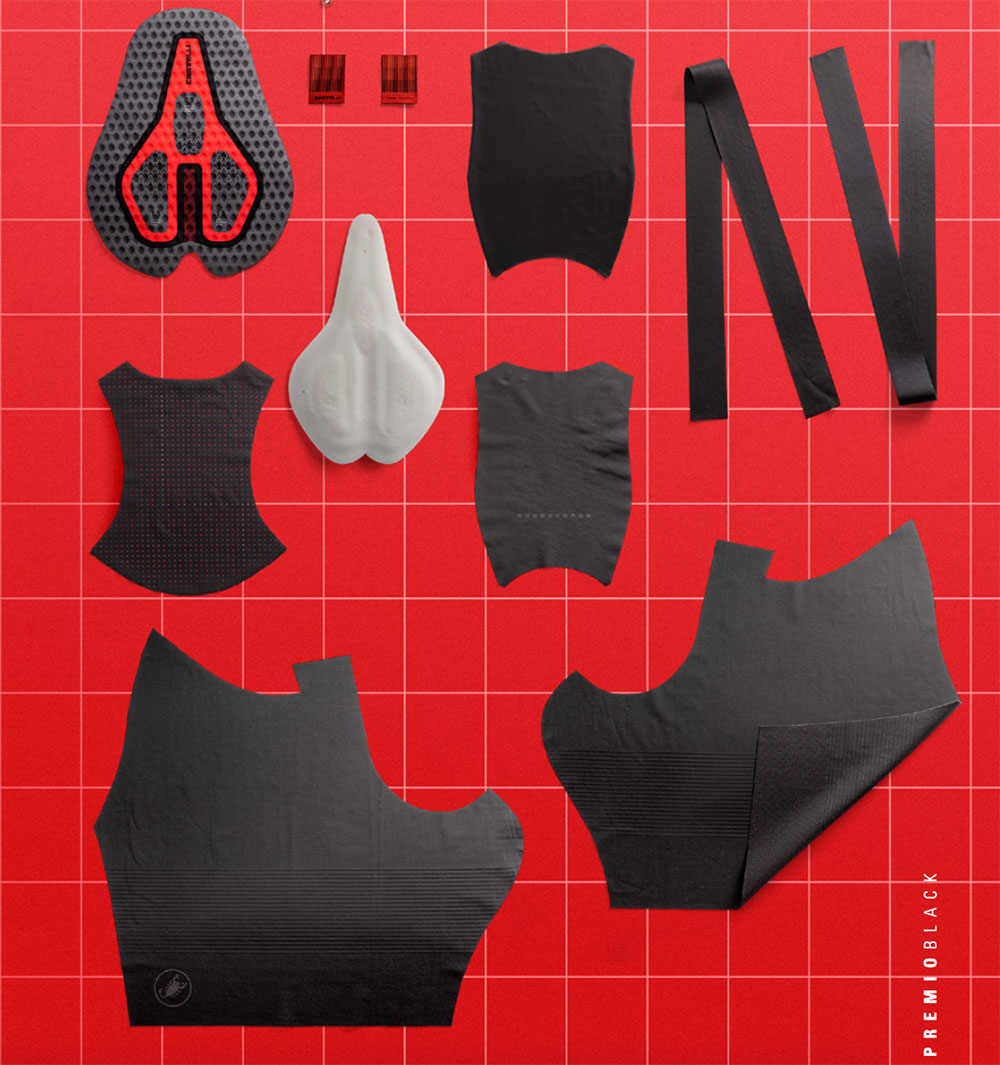 One big issue I’ve experienced in reduced panel bibs has been the lack of compression control through the body.   Castelli overcame this in the fabric weave – so that one piece of fabric contains varying weaves that literally change the fit, feel and performance of the short depending on where that section interacts with your body. 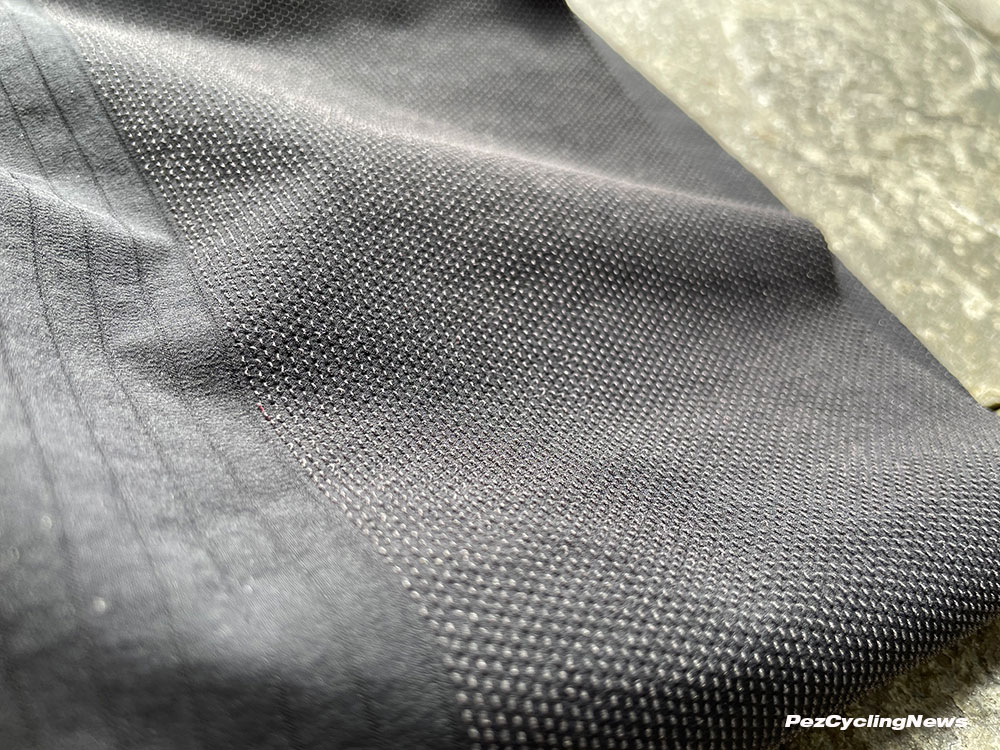 So – starting at the bottom – there’s no silicon leg gripper on these, there’s not a hint of silicon anywhere.  I like this because silicon doesn’t breathe – it creates hot sweat spots, and can be more uncomfortable than functional.

Instead – Castelli has woven in 35% lycra to add the required amount of stretch to this weave.  Much of this is visible at the leg band region – where the weave brings the lycra thread to the inner surface where they grip around the legs and effectively hold the legs in place while riding.  The surface is 6 inches deep on the mens’ bibs, (5 ” on the women’s) and creates an even pressured grip zone that’s very comfortable. 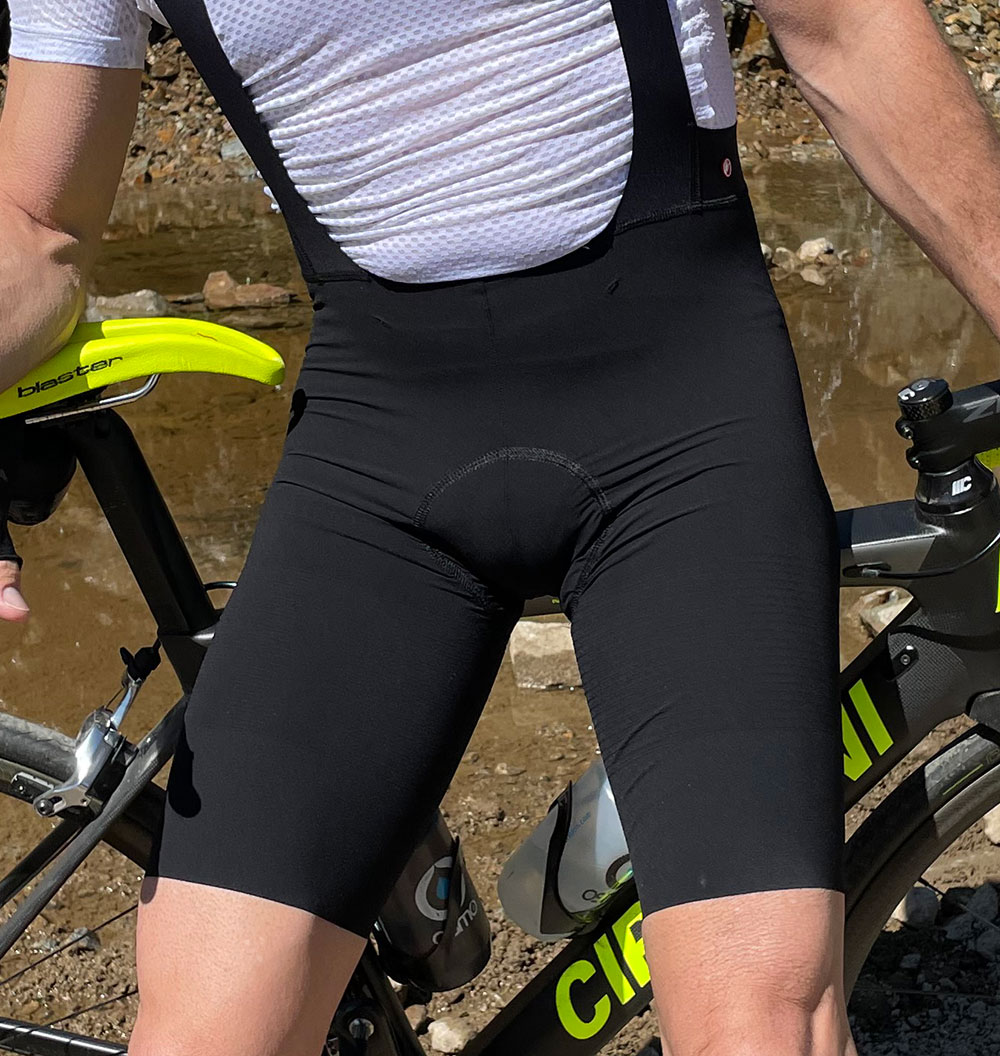 Above that, further up the leg, you can see how the weave changes to add support around the upper thigh.  Further up but not visible in my photo, the weave changes again around the hips.  Weave technology is fascinating stuff – allowing simple threads to create a very strong and structured garment without adding weight or bulk. 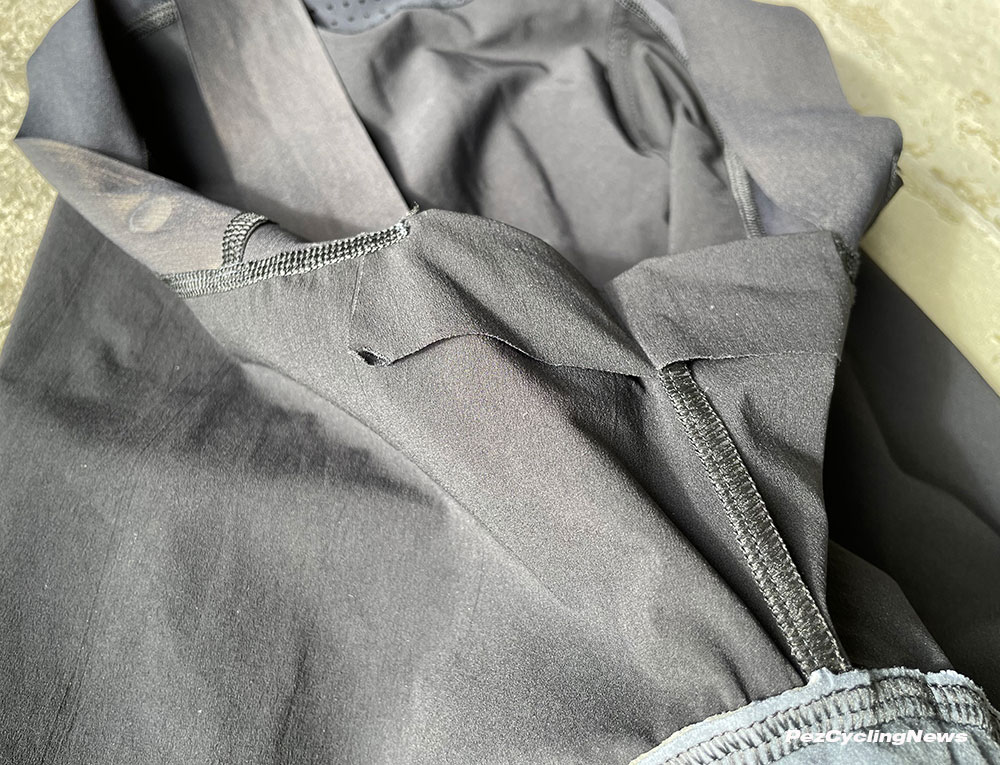 Inside the front of the bibs is a simple but effective folded in flap that adds comfort to the front, and allows the bibs to avoid getting stuck or caught on a base layer. 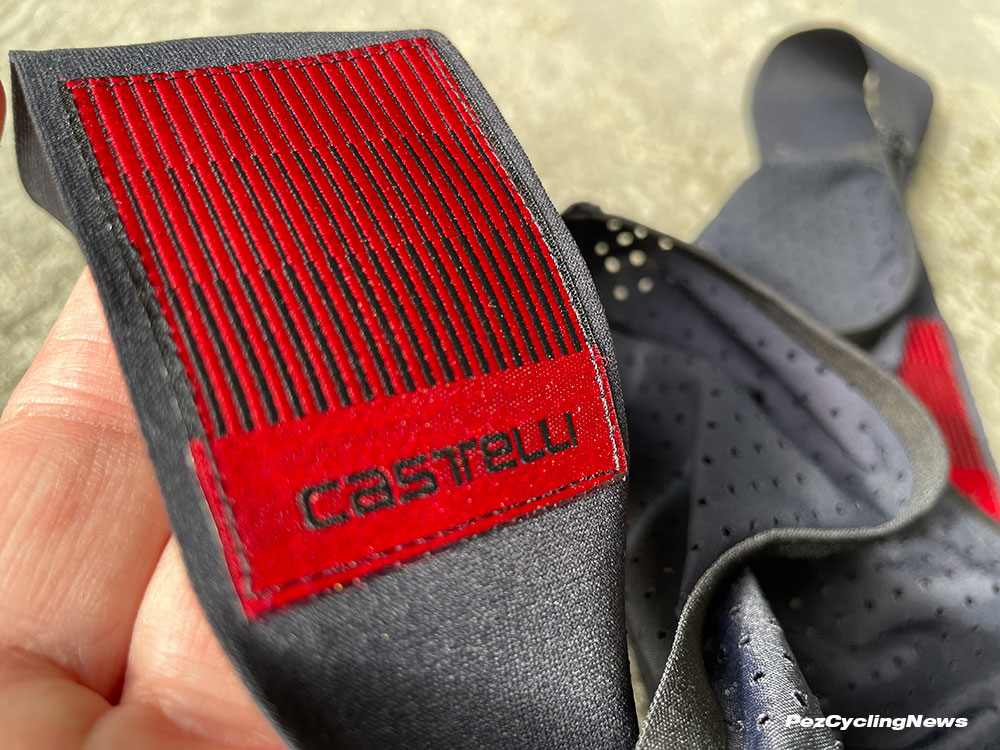 Here’s another of those “I can’t believe it’s taken this long for someone to think this up” features – but over the years I’ve seen Castelli come up with more than their share of these bright ideas.  This red tab is sewn onto each shoulder strap about where your collarbone is, and adds just enough support to ensure the straps lie flat against your skin – so they don’t “gutter”.  This works brilliantly. 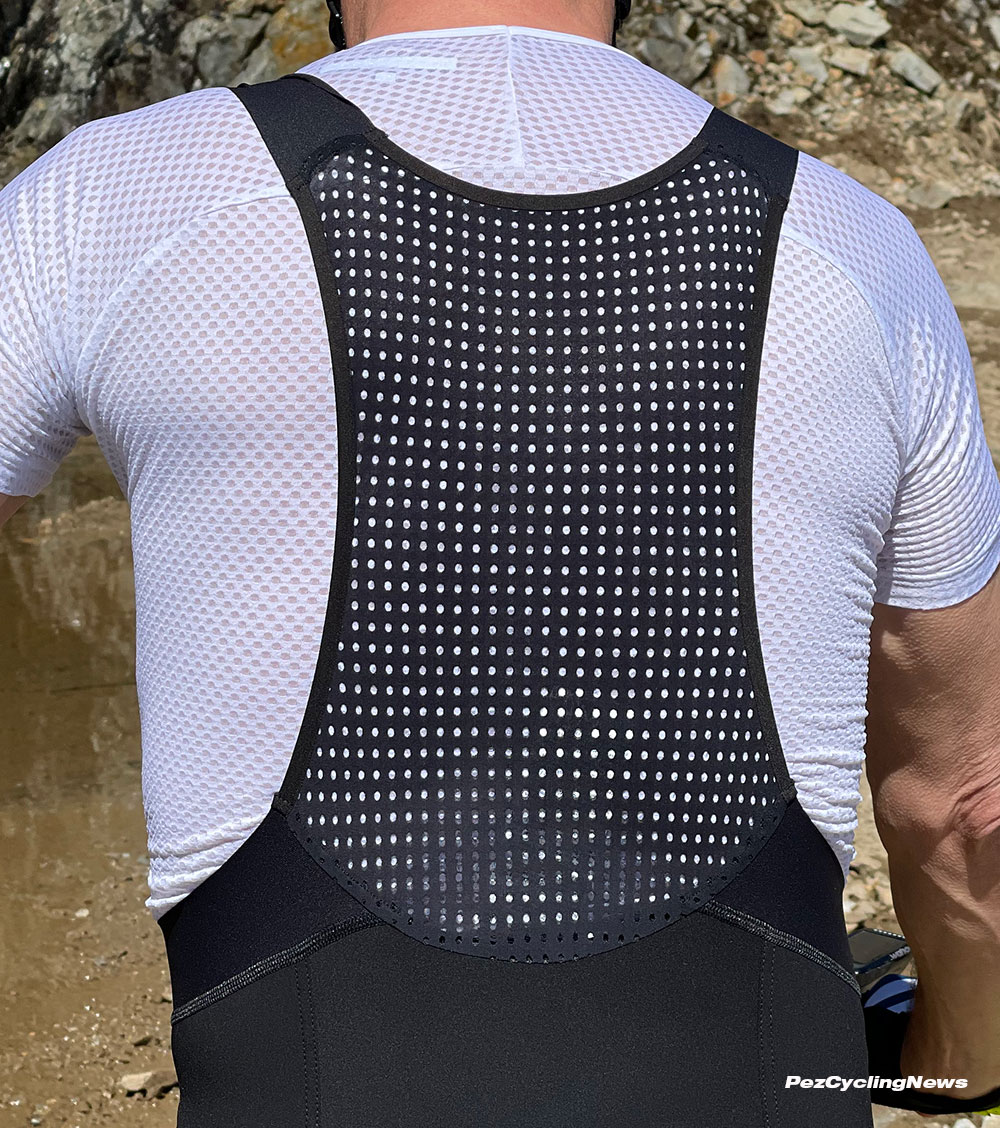 The back panel is this large vented mesh section, that adds structure to secure the shorts and straps in place where they can best do their intended job. 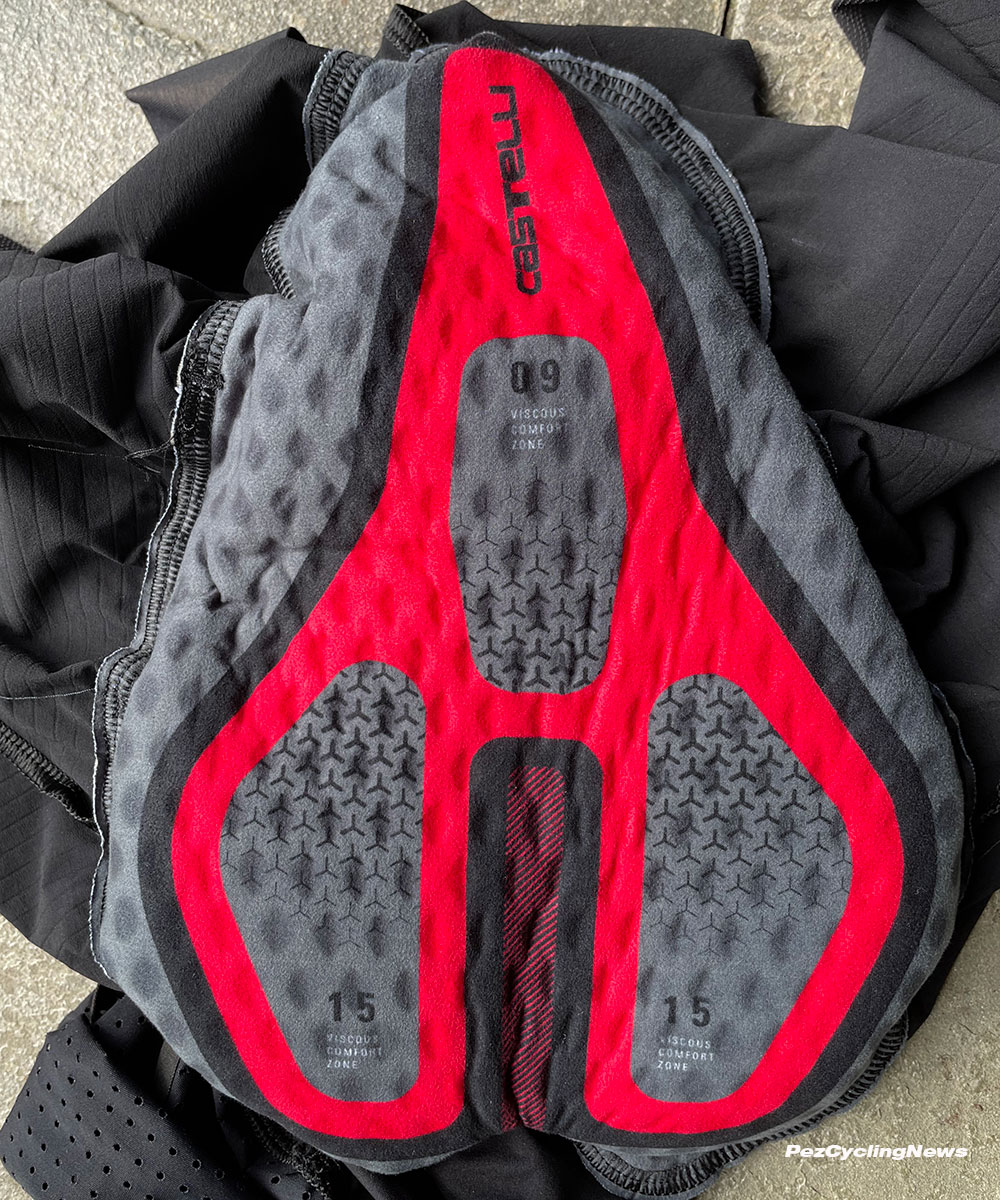 Protection for yer boys is what Castelli calls their softest and best seat pad yet.  The Progetto X2 Air Seamless pad was sort of first introduced in 2009, and has since seen over 40 design modifications – it’s changed so much that they might as well give it a brand new name.

It’s made of basically 3 main parts –

a. The layer that sits next to your skin – which is very soft, and stretches which means it’s less likely to bunch up and cause problems

b. The padded layer which is a medium-density foam formed with variable layer thicknesses (ie: smooth contours vs punched out or cut out ridges that other pads have) – so it offers a smoother transition through the pressure points between you and your saddle, and

c. The 3 small gel inserts placed at the sit bones and perineum. 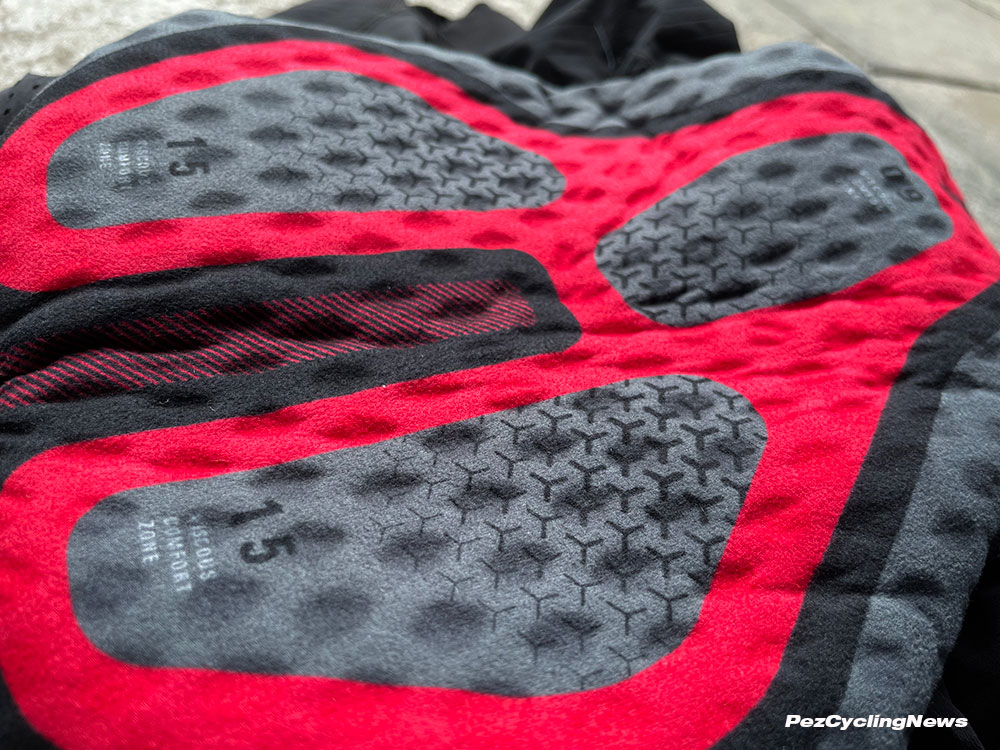 Performance
I’ve been riding this short constantly since I received my sample a few weeks back.  Overall I do like them, and along with Castelli’s Superleggera bib, these might be in my top 3 fave bibshorts for this season.

I like that the fabric has a nice tight weave because it just covers better – so you won’t see stuff you don’t want to see when the light hits the fabric in a certain way, you know what I’m talking about.  That guy on the group ride who shoulda bought a new pair of bibs years ago but insists on amping up the “Ewww” factor in his obliviousness?  He should really get a pair of these.

The basic black color is never out of style, and works with every color or jersey.

The front is cut low enough to allow for nature breaks without having to peel the whole thing off, but high enough so your base layer stays tucked in.

The leg grippers are very good.  Lots of even compression, and unwavering grip.

The more “rigid” feeling fabric also allows for an easier entry when pulling them on.  You know how some super stretchy bibs get caught on your toes and then you’re doing that one-legged hop/ dance that your teenage daughter secretly puts on Tiktok?   Yeah that’s not gonna happen here – because that woven fabric just doesn’t stick to toes as much.

Priced at US $279, they are not cheap, but given what I’ve seen so far, these could be that one pair of shorts you ride all season in most weather conditions, reducing the need for multiple pairs of backup shorts. 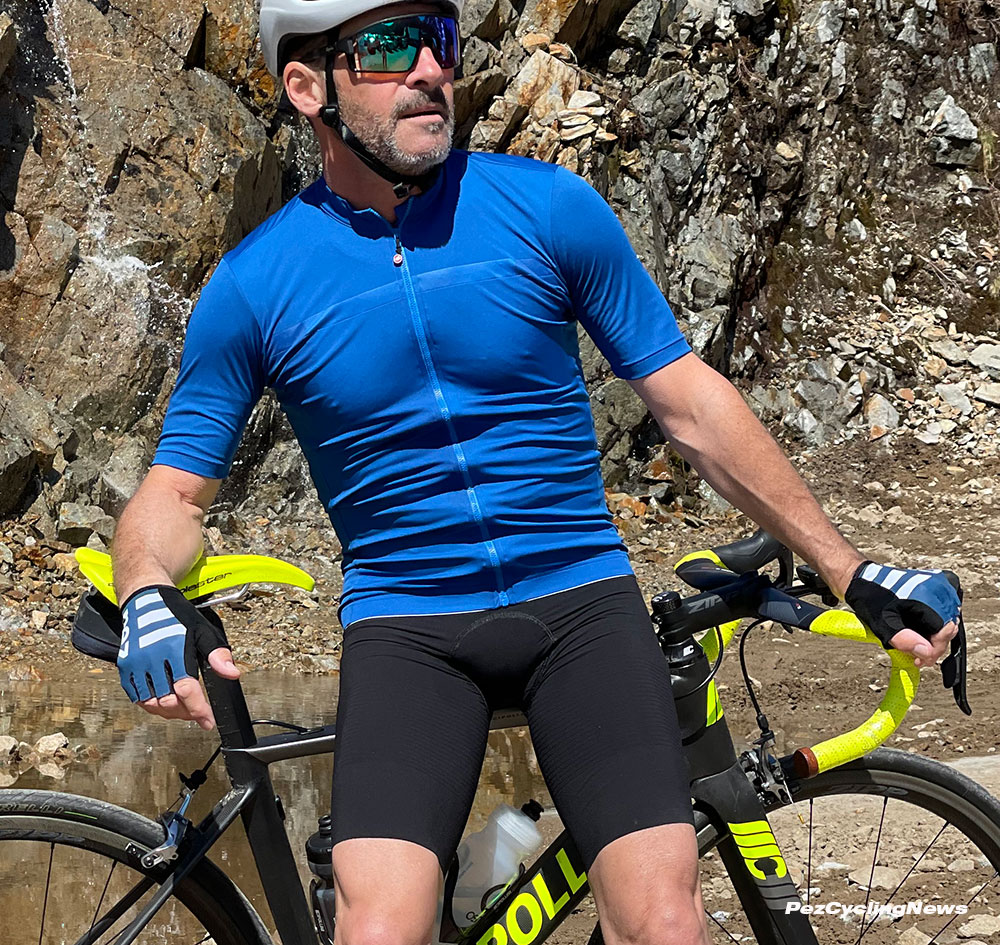 I paired the Premio Black bibs with the Classifica jersey – a straight-forward jersey well suited for training, most rides, and anyone who likes a comfortable fit.

Castelli’s kits tend to be tailored to fit in a range between “close to the body” to racer cut and I wouldn’t call this a “club” fit – because it’s not .  I’m wearing the size Medium, which I found was a perfect fit across my shoulders, but slightly longer on the body than I prefer.   I’m 5’8″ tall, weigh 138lbs, typically wear Medium size cycling kits. 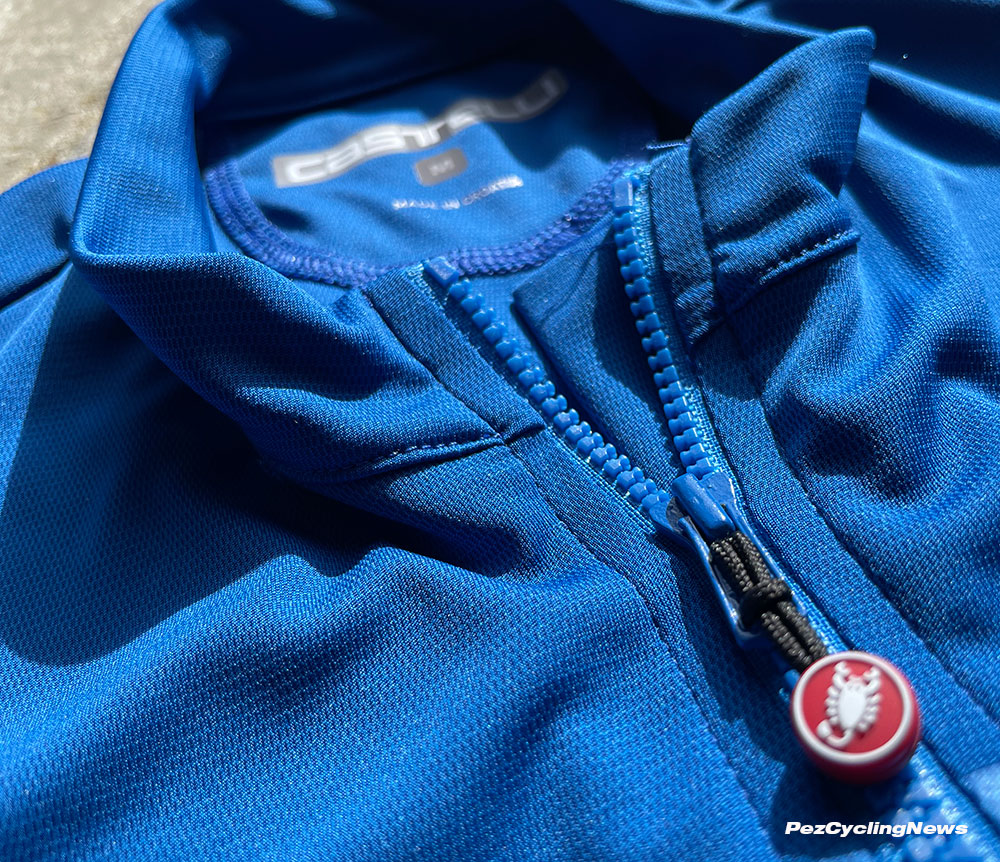 The fabric is a comfortable and soft Micro-piqué polyester knit that’s designed for good moisture management.  That YYK zipper is a winner every time and the Scorpion logo pull tab makes it even easier to open.  I like that there’s an actual collar here too – it seems like so many jerseys these days are going racer-cut collarless – which is good if the temps are hot enough, but around here in Vancouver, it’s only that hot for 2-3 weeks of summer.

They’ve used a dying technique that supposedly adds some color depth to the shoulders and sides, but honestly I couldn’t really see a difference, but the blue was brilliant throughout and does look good in any light. 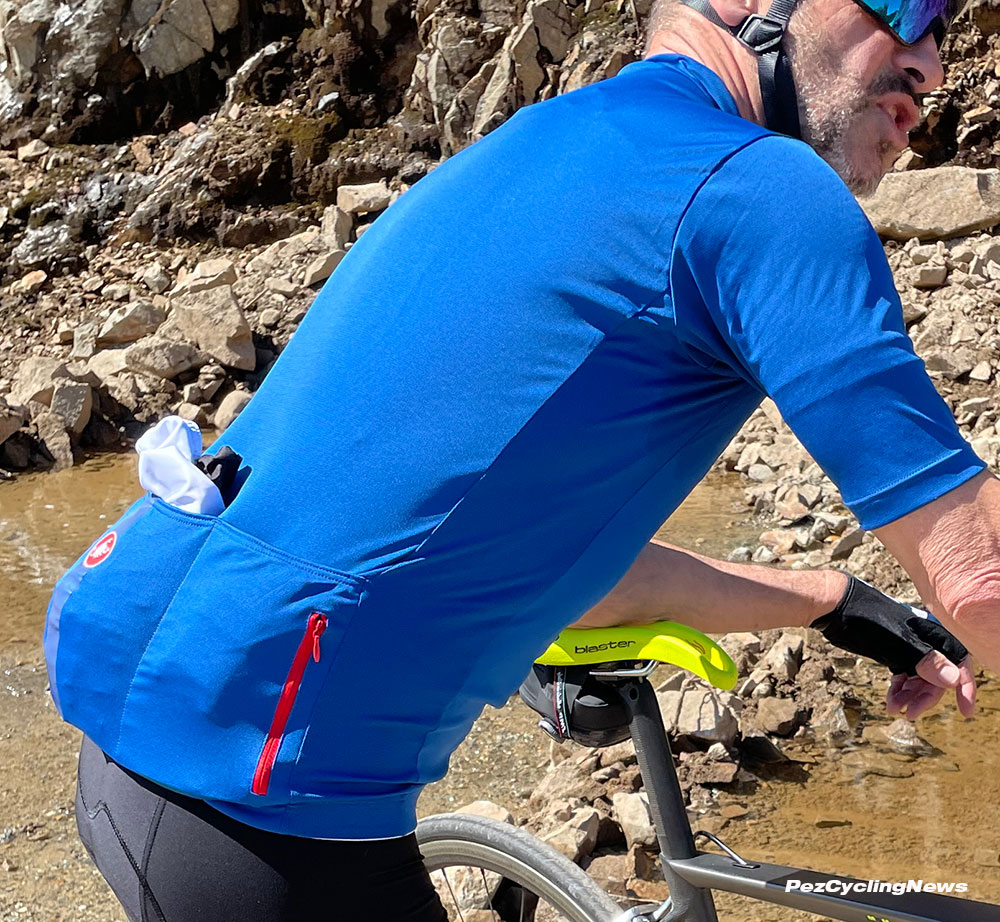 Around back are the requisite three pockets – deep and stretchy enough to hold a bunch of kit.  Here I’ve got my light vest, arm warmers, small tool kit, powerbar, and still have room for my phone.  There’s also a 4th zippered pocket to hold coffee cash and a credit card. 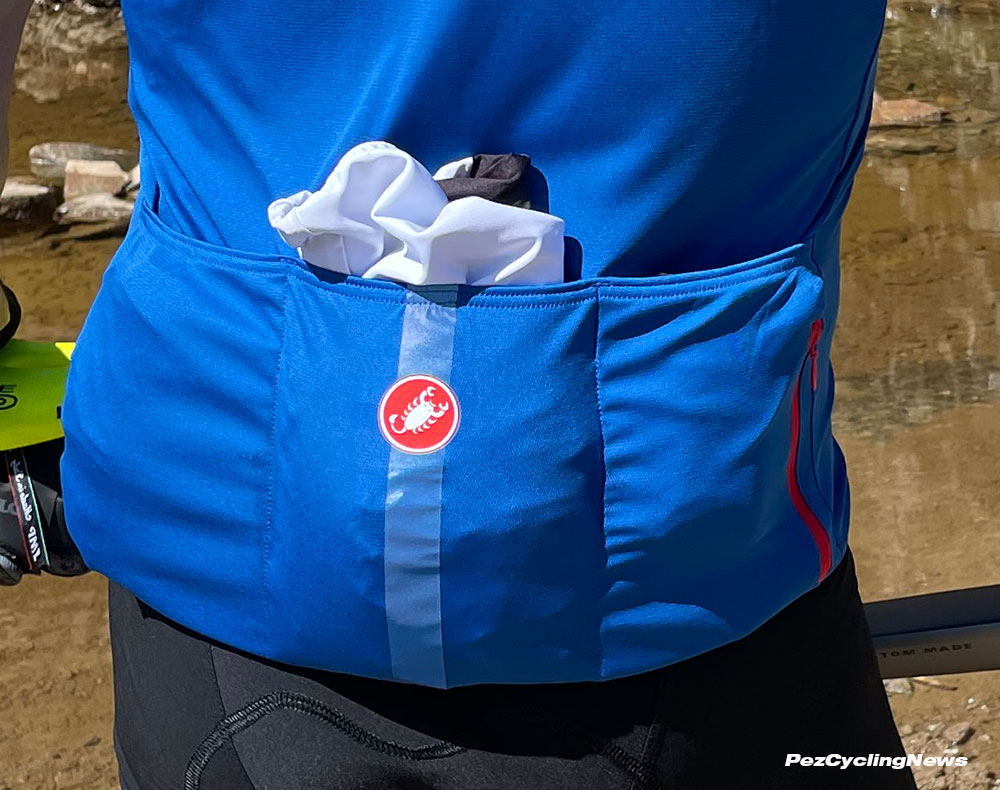 Contrary to what I said about silicon grippers up there in my Premio Black review – the Classifica uses a simple silicon band around the waist – it’s tried, true and does the job.  However I found the length of the jersey – being a tad long for my torso, was more a factor in causing it to ride up as the waist band settles at its natural spot when I’m actually riding. 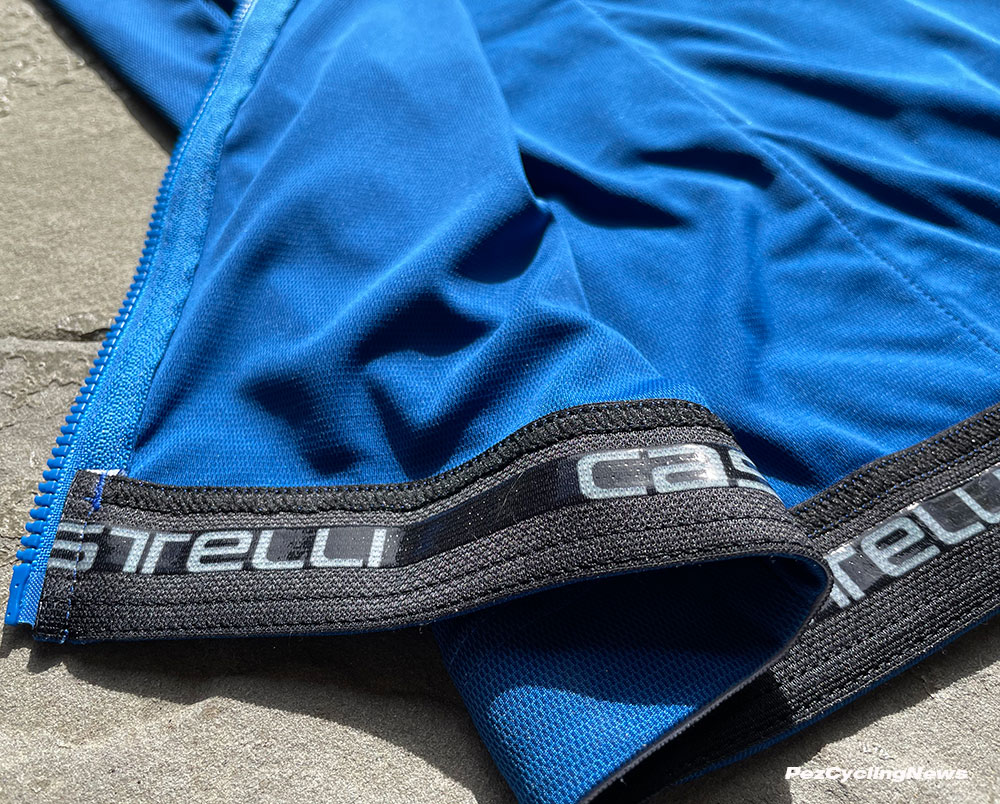 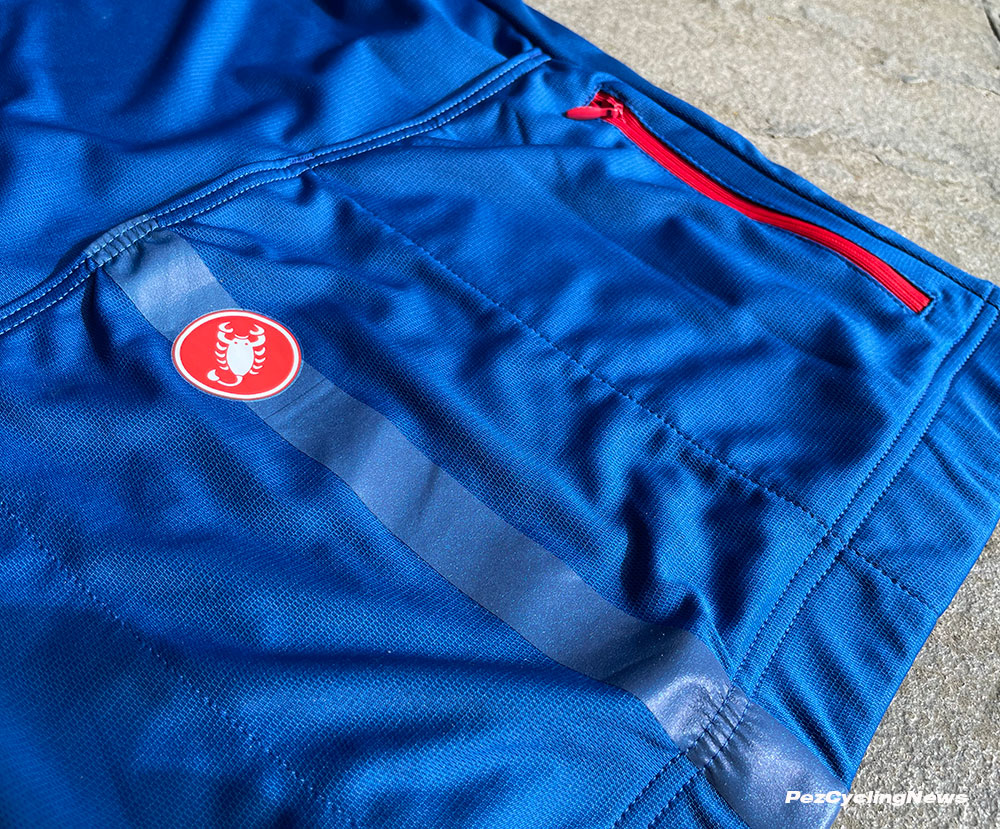 The sleeves area nice length too – long enough to cover my biceps and not ride up, and also not so snug as to feel constricting, but snug enough to eliminate flap and still look sleek.

Finally – like so many – maybe all? of Castelli’s jerseys, the sleeves and body are cut to fit best when you’re actually riding – that means the sleeves are slightly articulated forward where they meet the shoulders.   It may feel tight when you are standing or getting coffee, but that’s just because it was nt cut to fit you in that position.  And anyway it is called a “cycling” jersey, not a “coffee” jersey. 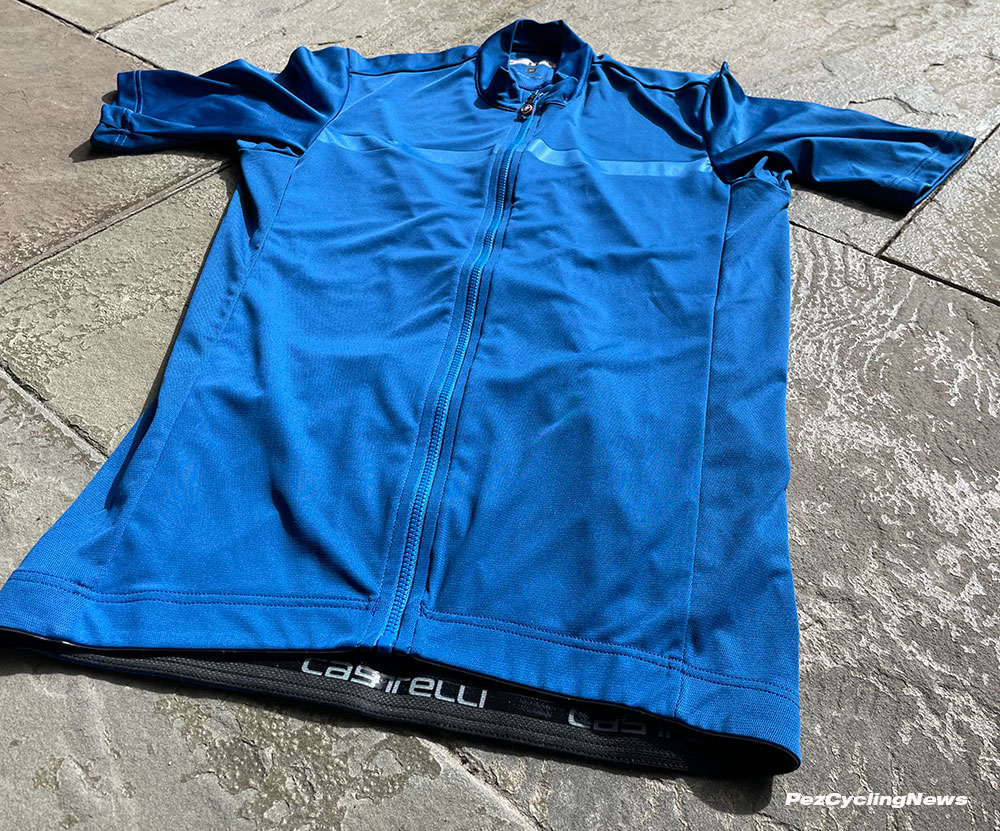 Thanks for reading and let us know what your own experience with these pieces are.

• See ore and buy it online at Castelli’s website here