The 100th edition of the Tour de France is now a pleasant cigarette-inducing memory, and the United States Postal Service Presented by Berry Floor (also team with longest official name) delivered the most-worthy winner. Most of us are aware of the time and prep the team dedicates to their quests. With access to virtually any brand, winning races is concern #1, so choosing equipment to do this would be concern #2. 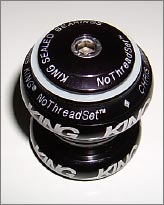 Enter Chris King Precision Components. If you were paying attention to certain tech n spec issues at le Tour, you’d have noticed certain US Postal Service team bikes (Trek 5900 climbing bikes and the new Madone 5.9) fitted with black 1-1/8″ NoThreadSets ™ from Chris King. Chris King stepped onto the USPS stage midway through the 2003 season, just before the Tour, as a supplier of some darn fine headsets.

It’s also a debut for the Chris King headset in the Tour. “We’re excited to be the headset of choice on bikes that are exposed to the most gruelling month of road riding possible, not to mention that they’re being piloted by some of the most accomplished athletes the world has ever seen,” said Chris King, King Cycle Group’s President. 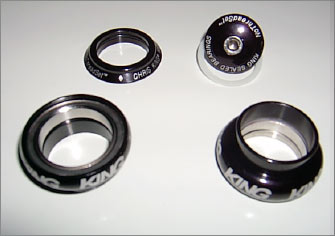 King was one of the first manufacturers of a thread less headset for use in bicycles. The King NoThreadSet(tm) has been considered a benchmark of quality for almost a quarter of a century. Each headset is developed with every attention to detail and each part of every headset is made by King, in Shasta Lake, California. King goes so far as to make their own sealed, cartridge style bearings – a practice unheard of in the bike industry. King offers one of the longest warranties in the industry – 10 years. Retail pricing is suggested at between US$114 – $134.

Get more info on the full line of Chris King components ay their website:
www.chrisking.com

Gutter Boy: Welcome To The Podium!