Launched with one of the coolest videos in cycling, the Cipollini Bond at first smacked cycling’s establishment as more of the flash and hype the Super Mario is known for. But he’s also known as a prolific race winner, and as this bike proved – both offer enough performance to warrant a place in cycling’s upper echelon.

The instruction manual for the Cipollini Bond runs ninety eight pages, the last fourteen offering a broadly “Italian” treatise on how to pack a bicycle for transport. The comprehensiveness of this “meccanizzazione” was the final affirmation, after several weeks and hundreds of miles, that craftsmanship is not a lost art in select quarters. 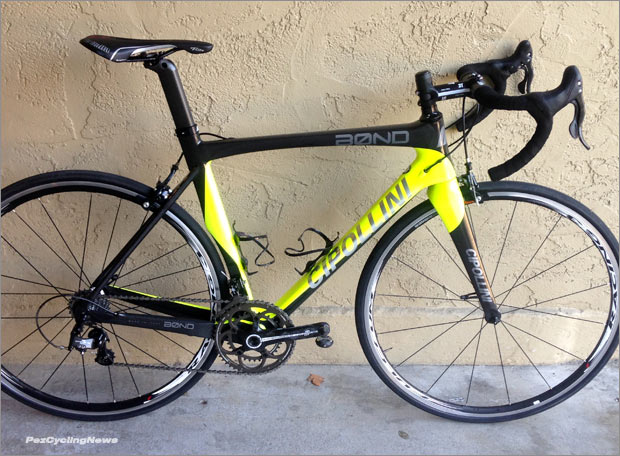 The phone call was unexpected.
It was Joe Roth of CipolliniUSA. I smiled to myself. He was calling to see if I wanted to put the new Bond through its paces, and I did. My enthusiasm was borne of my experience riding their flagship RB1k earlier this year, a bike that was pure joy to ride. Impeccably finished and tight like a newly strung instrument, riding it was one of the highlights of the year thus far, and now they were going to cut me loose again… 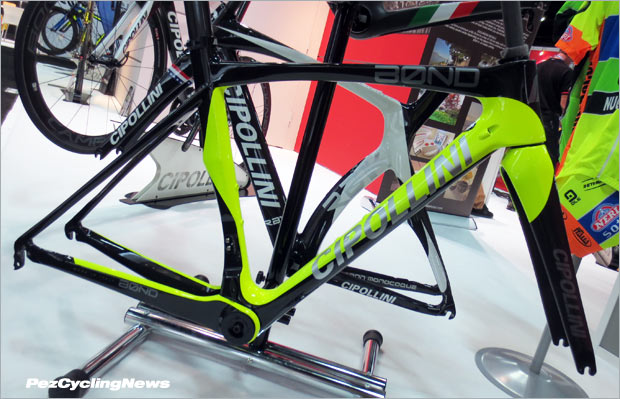 Over the past three years Cipollini has built some serious bona fides with their approach and commitment to craftsmanship. Focusing on an “all Italian” approach, the company invests heavily in designing unique and efficient frames that translate power into motion beautifully, and then sourcing those bikes from a primarily Italian vendor list.

The Bond features a host of innovations including impressive rigidity, the kind of finishing detail that you’d expect on a bike that could cost even more than its $4,500 price point for the frame and fork, and most notably its patented Atom-Link frame design. That it came similarly packaged in a near cocoon of protection was my first confirmation that the Bond is no step down from the RB1k, but rather a different interpretation of what a World Class riding experience can be. 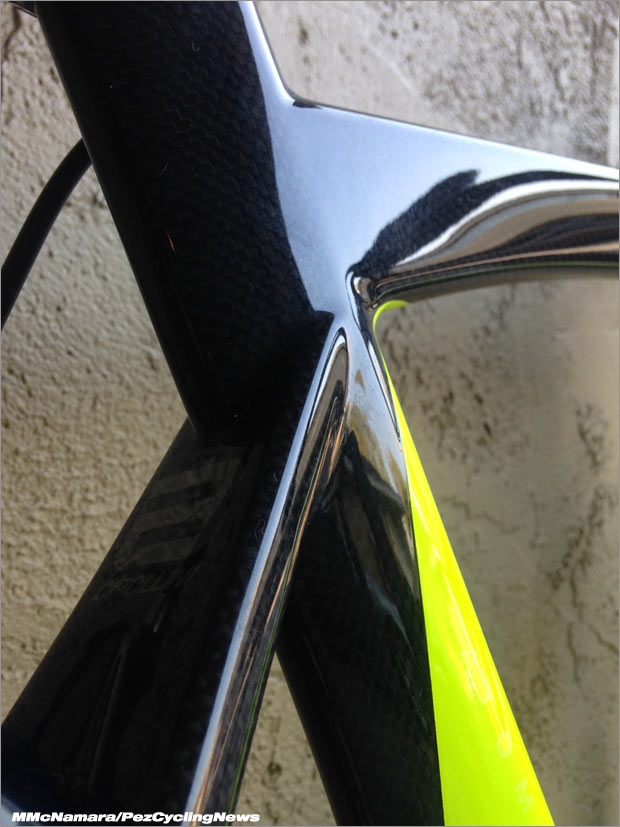 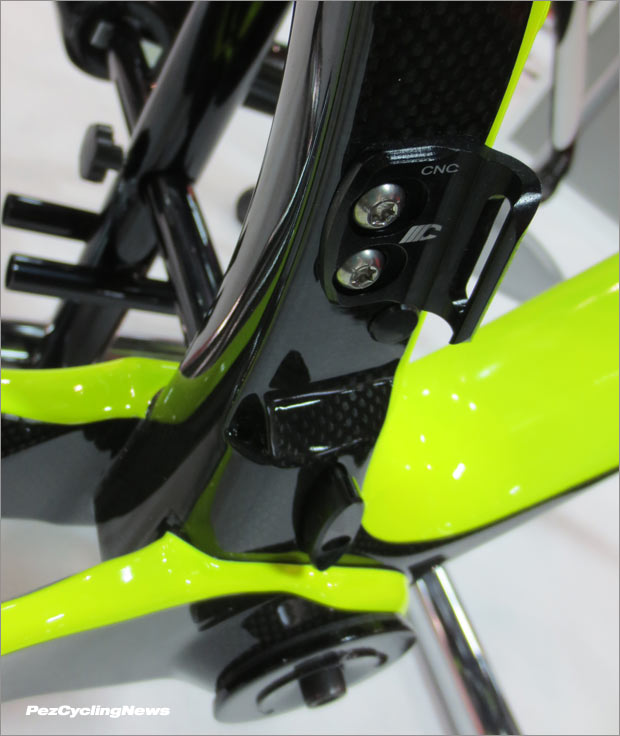 The cutaway seat tube points handily to the business end of the Atom-Link design chain stays.

Dimensions and Spec
I received a size large Bond frame, which measures out closely to both the RB1k and my everyday S-Works Tarmac SL4. The Bond sits a bit shorter on stack at 531mm versus the 564mm of the Tarmac, yet taller than the RB1k’s 529.2mm. Reach on the Bond is 395.5mm, 395mm for the Tarmac, and 401mm for the RB1k, ah the plot thickens! Both the Bond and the RB1k have 73 head angles, but the Bond’s 73.3 seat tube angle is slightly slacker than the RB1k’s 73.5 seat tube angle. In addition the Bond has 1mm less bottom bracket drop than the RB1k (69mm vs 70mm), which raises the center of gravity slightly, we’ll see how that plays out. 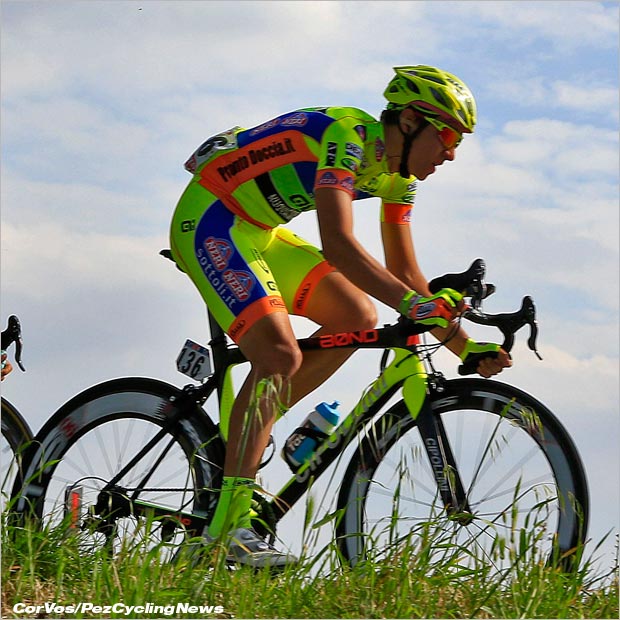 Cipollini’s pro team sponsorships were easy to spot – like the fluo livery of the Italian Neri-Sottloi squadra.

The bike was wearing a full Campagnolo Chorus 11 speed group and Fulcrum’s Racing 3 wheelset shod with Vittoria tires. The wheels were stiff, if not magically light at a claimed 1,550g, and bore different size rim profiles with a 26mm in the front and a 30mm in the rear. They make a very nice training wheel, but at the rarefied price point the Bond reaches, I imagine many buyers will spec something even more exclusive since all Bonds sold in the US are spec’d either as framesets, or to the buyer’s custom specifications. The Vittoria Open Corsa CX tires were top notch, delivering the excellent performance we’ve come to expect from this stalwart brand.

The cockpit was all 3T, including the comfortable Ergosum Pro bar (245g/42cm) and ARX Pro stem (140g/110mm), both in aerospace aluminum. The bar features 89mm of reach and 128mm of drop, which fit me very well, thank you very much. I felt immediately sentimental when I saw the Selle Italia Flite saddle. Selle Flite was the only saddle that mattered back when I first started riding. It was the first really successful titanium railed saddle weighing something like 198g. Selle Italia still calls it the “Winning’est” saddle of all time. This iteration, the Selle Italia Monolink Flow, is nice. Though wider at the wings, it harkens back to the early versions, especially where the nose branding sits, and at 180g, it’s lighter than the original and just as comfortable, offering several perches within its 275mm length. 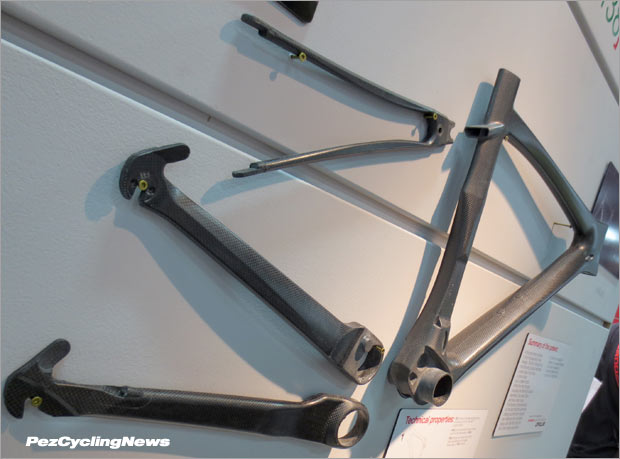 The Tech
While the Bond has a solid monocoque front triangle paired to a massive and visually stunning fork, the rear triangle features style and substance of its own.   The ‘Atom-Link’ assembly is the first design we’ve seen like this, Cipollini has a patent on it, and went so far as to create a whole video that shows Super Mario himself guarding the secret BOND blueprints from cheap imitators in a pretty good James Bond-style send up (fear not – that video is at the bottom of the page.)

The Atom-Link design is the highlight, offering a new slant on creating stiffness in the lower half of the bike that  Cipollini calls ‘revolutionary’, although data on just how stiff wasn’t available at time of writing.  The photo above shows how the two chain stays connect to the bottom bracket assembly from the sides, and it’s easy to see how the multiple layers of each assembly meet and combine to create a very solid looking structure. 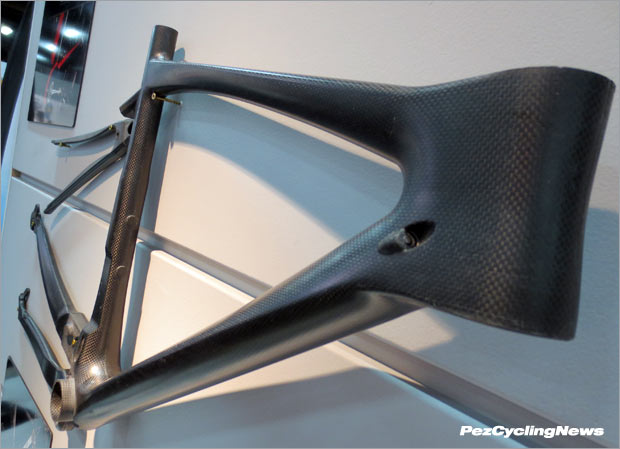 Traditionally the chain stays are attached to the bottom bracket via some version of inserting a tube into a lug. If you wanted the bottom bracket stiffer, you’d start by adding material to help limit flex in the BB. More modern times have seen the rise of custom shaped chain stays to help improve the transmission of energy into motion, and custom shaped seat stay to create the all important ‘vertical compliance’. 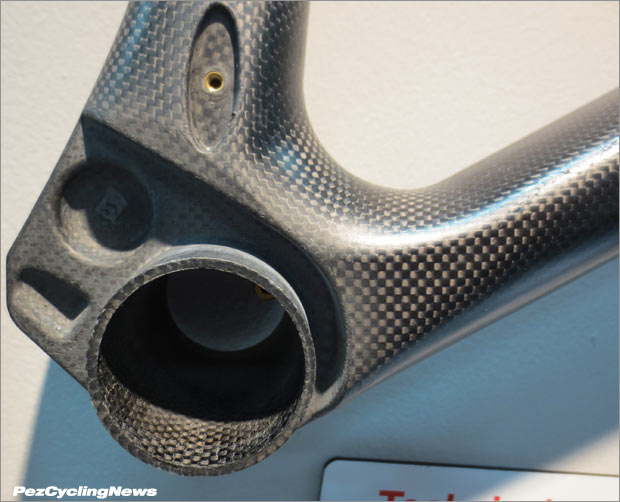 With the Bond, Cipollini is taking a slightly different approach by making the entire bottom bracket and chain stays part of a modular system that when paired, increases the overall stiffness of the assembly. Ok, maybe it isn’t completely revolutionary, but the dimensions and integrity of the design, nicely paired with the BB386evo standard, maximize BB bearing width create a very stable platform. Their new “Nuke” Time Trial bike uses the same approach.

The chain stays are molded as separate pieces of substantial girth, that at least look the part of a very rigid power-transfer system. These are bonded to the BB sides (hence the name Bond), into pre-shaped male/female-type fittings designed to make power transfer as efficient as possible, and the ride as stable as possible. 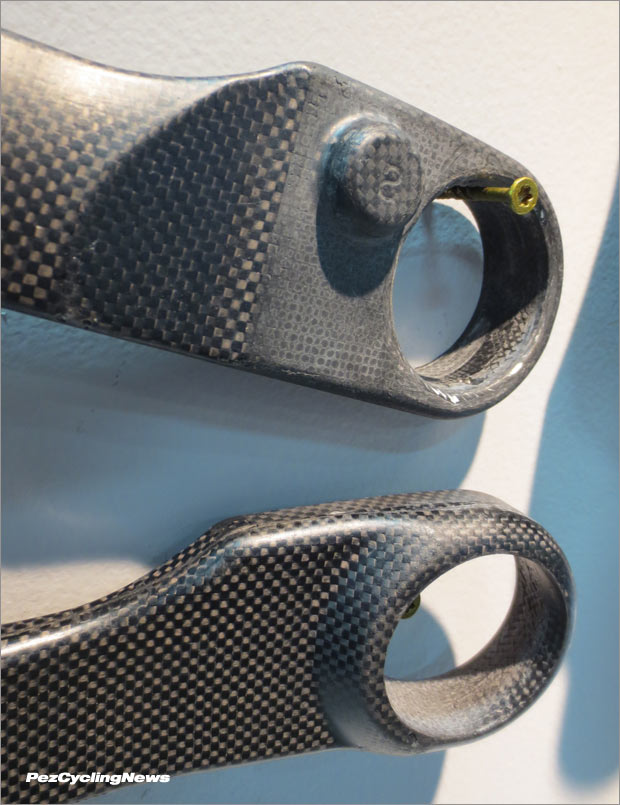 At the seat stays they’ve taken a novel approach as well by curving and molding the tubes to create that coveted bit of seat stay suspension, and a slant that at least suggests aerodynamics keeps the profile of the stay graceful and efficient. 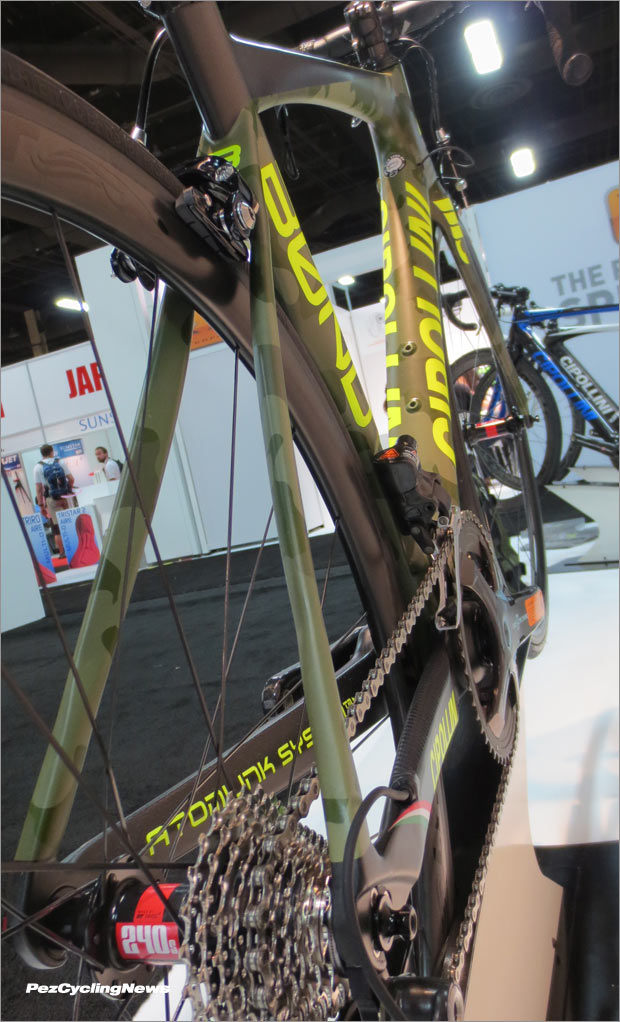 The curve built into the seat stays to aid both rigidity and vertical compliance. 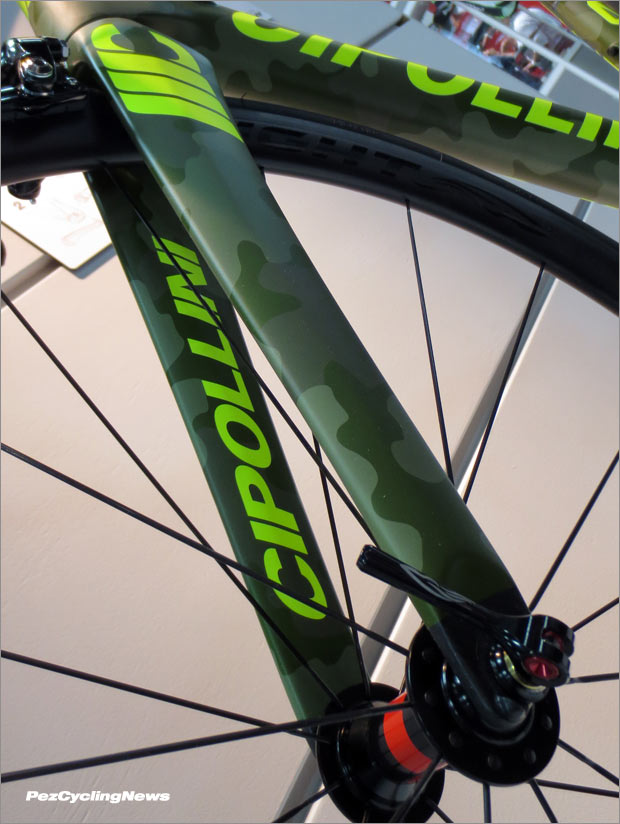 The fork is made of the same T700 and UTS carbon used in the frame, and makes for a very stable front end, and predictable high-speed steering.

The Ride
Having spent a fair amount of time on the flagship RB1K, I had high expectations for the Bond in finish and performance. The look is gorgeous with long and sleek lines across the top tube. 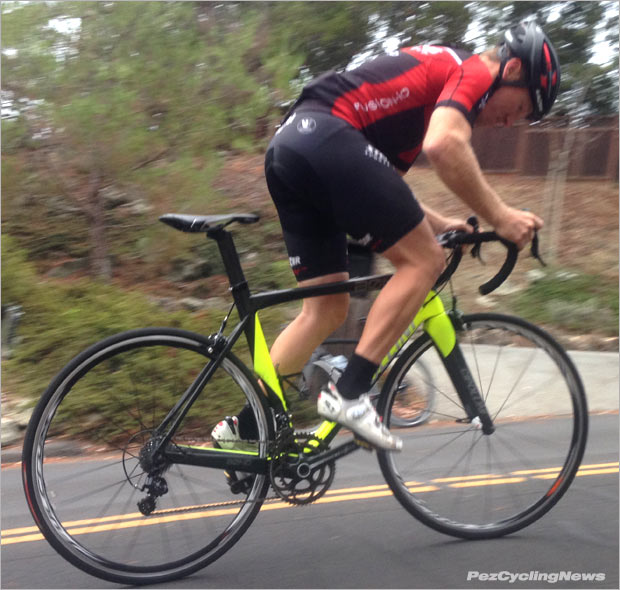 On that initial ride, to be honest, my first impression felt more Fondo than pure race bred beast. It didn’t accelerate like the RB1k, didn’t strain at the reigns like I wanted it to. I loved riding the RB1k and worried that this was less. While the bike felt solid overall, tracked well and changed direction at traffic speeds with ease, the front end felt slow on those low speed turns we inevitably weave commuting to preferred roads. What feels to be a long wheelbase keeps the bike from being super agile at low speeds, but there is an upside as speeds rise. 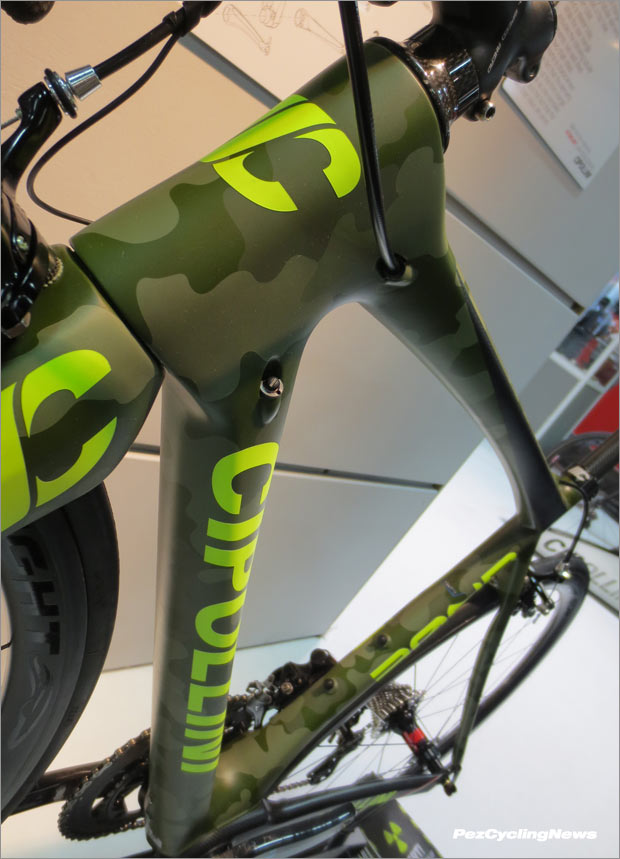 A very solid front end thanks to the big fork crown tightly mated to the main frame.

As I ventured into climbing and descending with the bike I started to appreciate the nuances it brought to the table. Agile when standing, it accelerates well, even on grades over 12%. Rolling fast into the base of a short 5-8% climb, the bike feels very stable accelerating both seated and standing, the latter highlighted as this climb quickly steepens above 14%. The Atom-link system isn’t immediately noticeable, instead you pick up bits and pieces, “ahh ha” moments where the stiffness carries that little bit more power on the downstroke, or seems to tuck in underneath you just a little more on descents.

I love searing a downhill planted on a bike I know well and clicking off turns without thinking. As I gradually ventured faster I found the upside of the wheelbase. Taking the first pass on my favorite downhill the Bond was solid. This bike is calm and cool. Unflappable sounds perhaps too British, not suave enough for the Tifosi, but it is apt. As the bike picks up speed it becomes both very stable, and appreciably predictable. 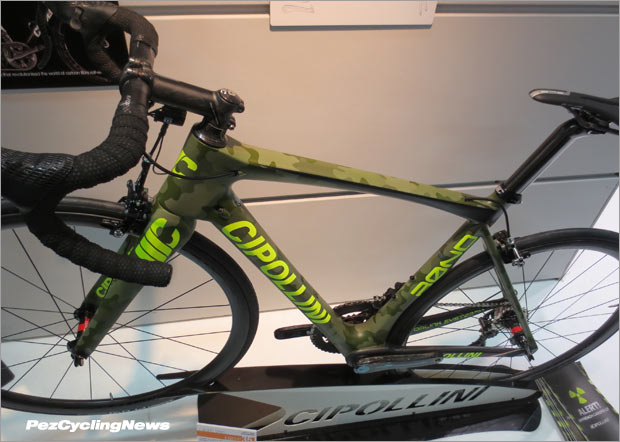 The more I rode it the more I saw the racing side come out. It isn’t as quick on the front end as others, but it tracks beautifully where you aim it and doesn’t overload the rider with feedback. A testament to the Fulcrum wheels and Vittoria tires, as much as to the 73 degree head tube, perhaps. Throw in a 152mm head tube and you can see the quickness that’s just waiting under the hood. 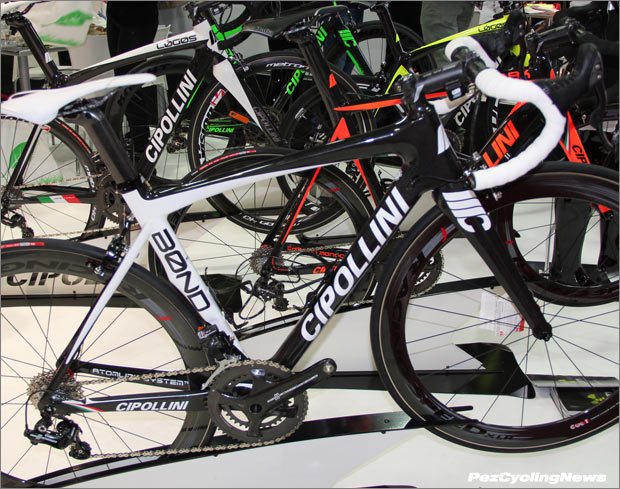 Summary
Cipollini draws more draft in Europe than the United States. He’s in and out of the public eye and in the early days it was easy to dismiss his bike brand as purely marketing driven. But in my experience so far, they’ve put the bike first. The Bond is a wholly different ride than the RB1k, but is no less compelling.

The Bond seems somehow old-school. Like you could get on and ride for hours immediately comfortable. It forgives lapses in judgement and cuts nicely when asked. There is a learning curve with this bike, but as you unlock little pieces you want more. My longest ride was probably in the 40-50 mile range, but I could easily see this being the Sunday-Long-Ride de-facto choice. If you’ve pulled the trigger on a big deal recently, love Italian things, or just like having cool bikes, the Bond is a great addition to your stable.

Finally – to really appreciate the coolness of the bike in ‘only as Cipollini can present’ style – check out the video: