The newest thoroughbred in Mario’s stable – the Cipollini NK1K, arrived for my first ride in understated shades of grey and silver. There is no splash of the fluorescent color that helped define the brand out of the gate, instead this bike came out of the box dressed to the nines and all business. Does this signal a more mature Super Mario? Let’s go for a ride and find out. 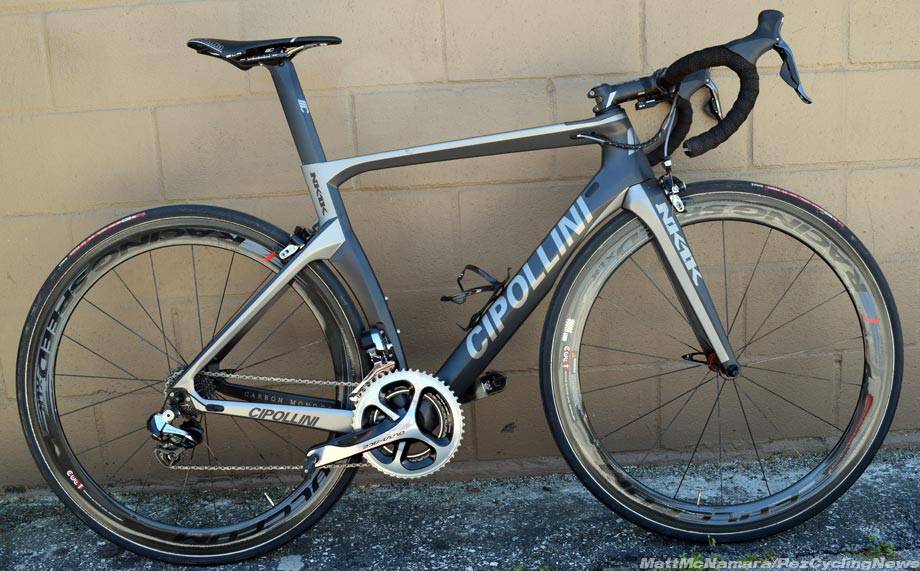 First Impressions
Like previous Cipollini’s I’ve ridden, the RB1K and the Bond, this one arrived packaged like a piece of art. I don’t mean simply that it’s well protected by foam and packaging, I mean that it’s assembled into a piece of travelling artwork. The wheels are secured just so, the bars arranged to minimize both size and potential for damage, the derailleur cradled in its own cocoon of plastic and foam. 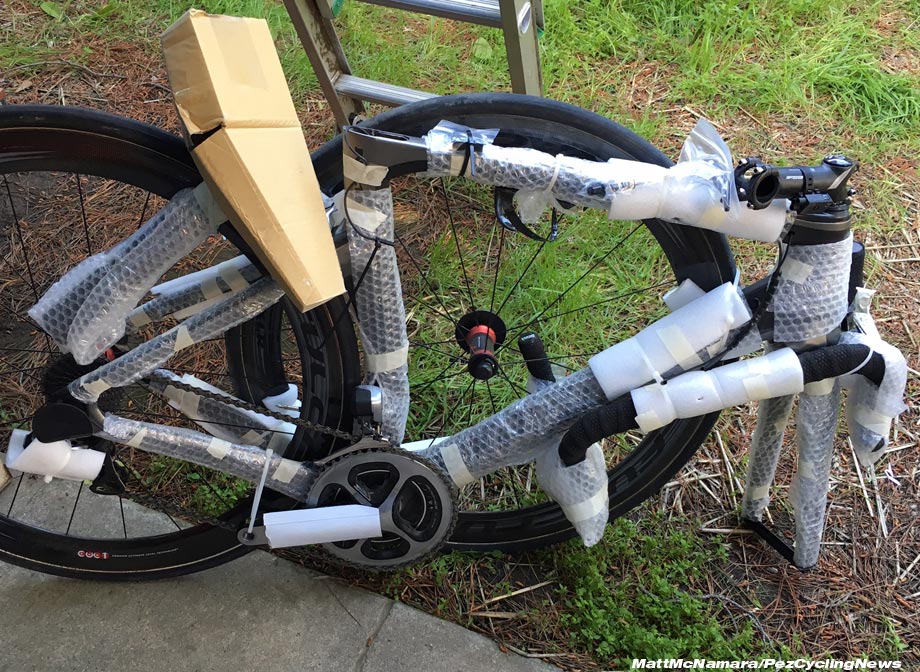 Great artists can make you wonder at the mindset that brought their works to reality. Maybe it was VanGogh’s “Sunflowers” or Rodin’s “The Thinker” – master works by true masters, either of whom could have easily envisioned the NK1K as form and function even if the angles and materials come from a different era. And that is the point. Once assembled, the beauty of the bike jumps out at you. It’s all sharp angles and sweeping arcs, a stealth fighter as might be done by Michelangelo; seemingly carved from a single block of carbon fiber instead of granite. 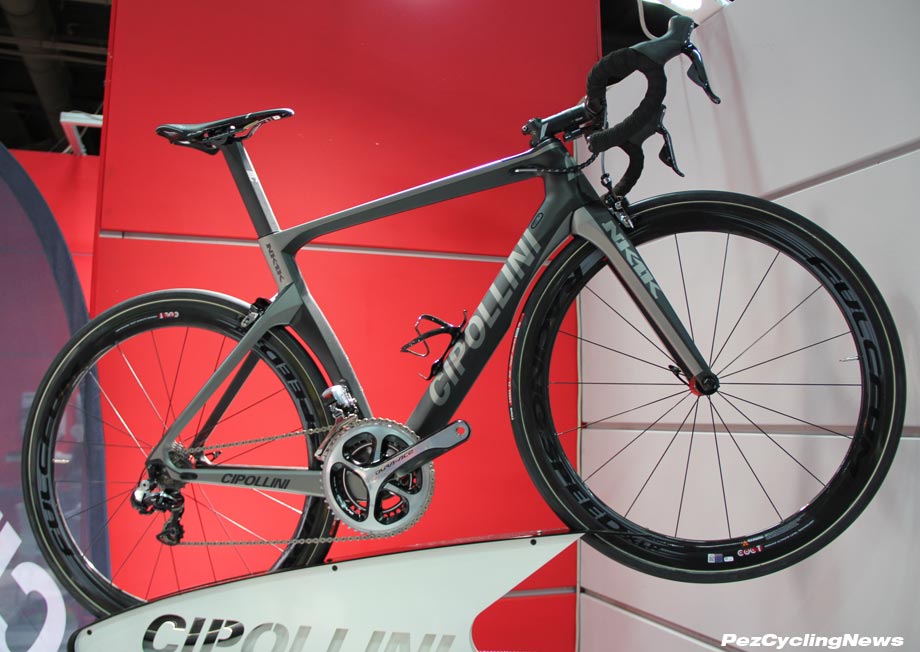 The Spec
The spec on the NK1K is once again, largely infallible. Shimano’s Dura Ace 9000 electronic group handles gear selection, shifting 50/34 front rings and an 11-28 rear cluster on 172.5mm cranks. Brakes are the new Dura Ace direct mount models of notable stiffness thanks to the more substantial attachment points. The Selle Italia carbon railed saddle is quite comfortable mile after mile and has a nice flat profile, allowing a few more options over varied terrain. 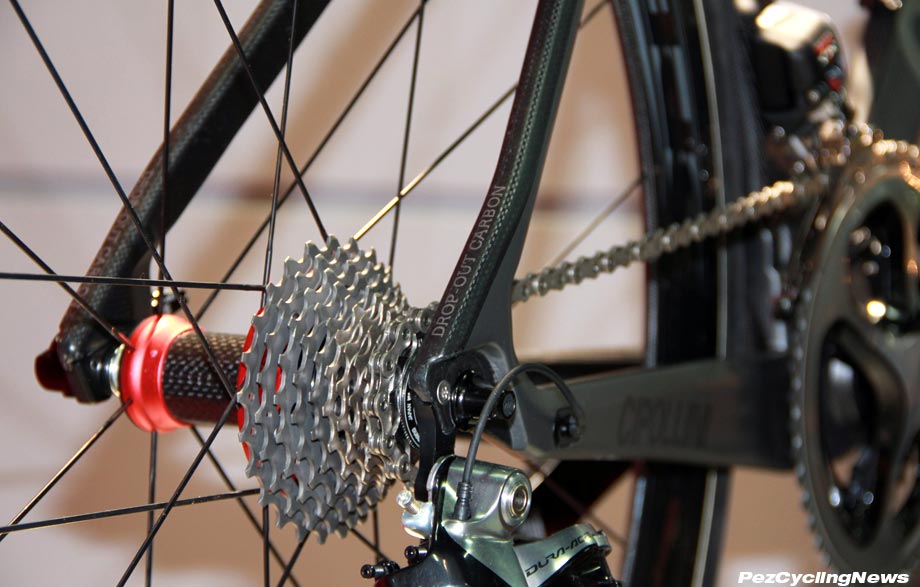 The bike rolls on Fulcrum’s top line Racing Speed XLR 50’s, a spot on choice. Little things like Dynamic Balancing (essentially adding weight opposite the valve hole to better balance the wheel), ceramic ball bearings (that roll up to 9 times longer than non-ceramic versions according to Fulcrum’s website), and the fact that the wheels are 100% handmade, guarantee a level of quality you’d expect on a bike at this level. 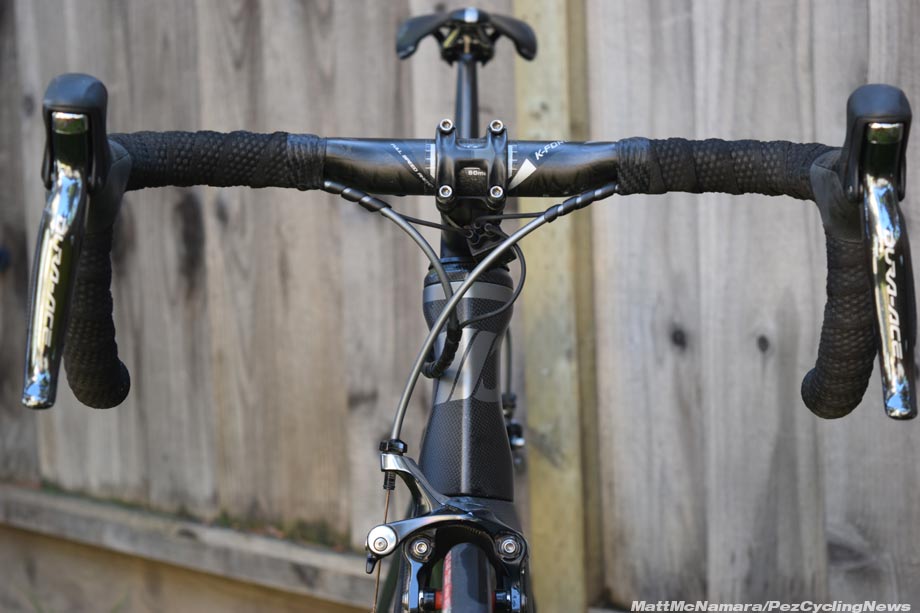 One obvious miss for me is the handlebar. The bike is positioned as Cipo’s “aero” entry, yet carries FSA K-Force bar, which although very nice, is not very aero in comparison with bars on offer from Trek, Enve, and Zipp, among others. The routing of the cables leaves them twisting in the wind and takes away from the overall aesthetic of the bike on the front end. The Cipo website lists the internally routed Vision Metron 4D as an option, and of course, as most Cipollini’s are custom built by each customer, you can select the bar that best suits your needs.

The Numbers
I tend to look for an artistic expression in the numbers. Maybe it’s a desire to understand more completely the artistry of the design engineers and Mr. Cipollini himself. Clearly with this bike they’ve taken a slightly more mature bent to their mosaic. The angles are shallower than the RB1K – The seat tube at 73.5 versus 74.5, the head tube 72.5, a ½ degree less than the RB1k’s 73 degrees. The top tubes are both 545mm in the medium sized bikes I tested. Despite the similarities, overall reach is quite a bit shorter on the newer bike, coming in at 384.5mm vs 397.5mm on the RB1000, while stack is actually higher 541.5mm vs 520.1mm, likely due to the longer head tube 138mm vs 115mm. 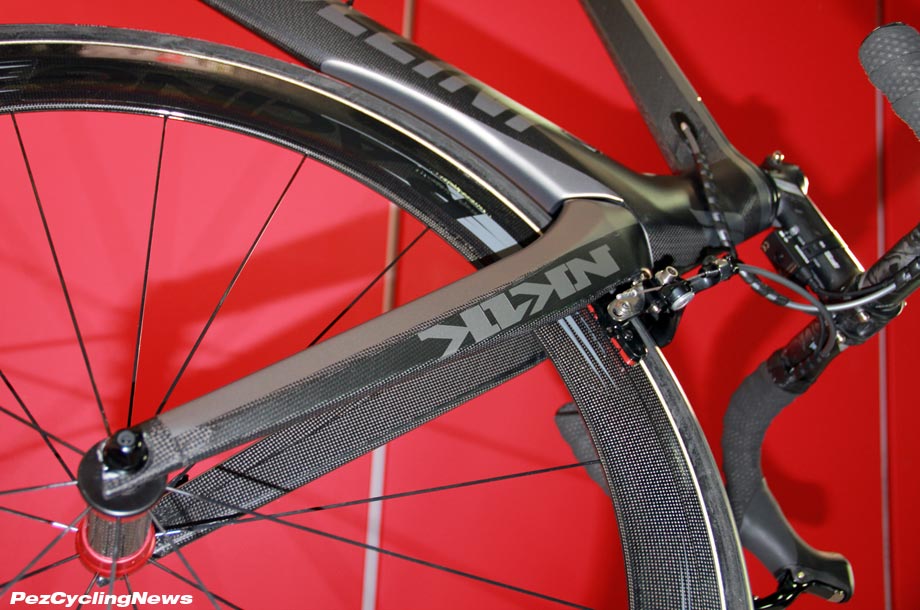 Fork rake is identical at 45 degrees. Trail is slightly longer – the Nk1K comes in at roughly 57mm of trail, while the RB1K is more like 54mm. So what does that mean? Fundamentally, the NK1K should be more stable – and riding with hands off the bars it feels rock solid. No extraneous twitch in the bars was noticeable, a marked contrast to the RB1K which always felt twitchy, especially at low speed. 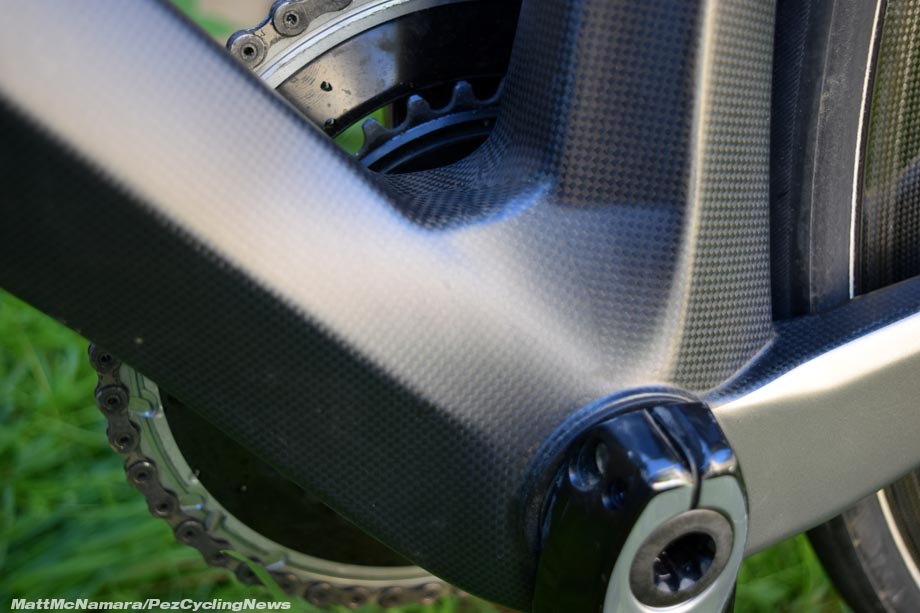 Bottom bracket drop on the NK1k is 71mm, 1mm less than the RB1K’s 72mm. In concert with trail, bottom bracket drop provides an important insight into the bikes handling. The NK1k sits just a little bit higher, and while 1mm may not sound like much it did seem to affect the feeling of the bike on the road.

The Ride
I start most rides with some handling drills – you know, slalom thru the dashed white lines before the intersection, a quick direction change to miss the manhole cover, dodge the rock, hard stop. This ride is no different – it’s the shakeout, establishing the connection and figuring out what the bike is about. 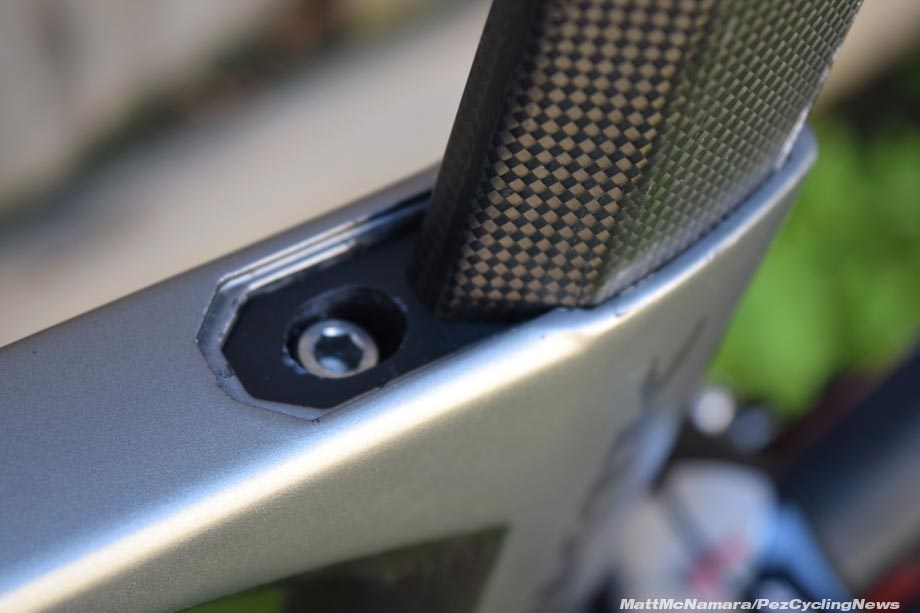 This bike is about aero, and the NK1K pulls some of the usual tricks, the narrow bars, the aero seat post, a cool little recessed binder bolt assembly. The bars are forty two’s and I’m surprised at the difference two centimeters makes. My shoulders feel a bit cramped and my hands sit inboard of them rather than parallel.

Of course none of that matters on this first ride because the bike is splendid. It is both quick and stable. When I sit up off the bars it tracks straight as an arrow, unflappable. Hip steering elicits quick snap turns and an easy return to the straight track. The bike rides small, heck it is small and that’s part of the fun. Slinking into turns late and pushing over hard to dive an inside line is pure thrill. The stiffness of the monocoque frame shines thru with nary a wasted motion and the massive fork crown keeps things stable up front. Think left, go left. Exhale right, drift right. 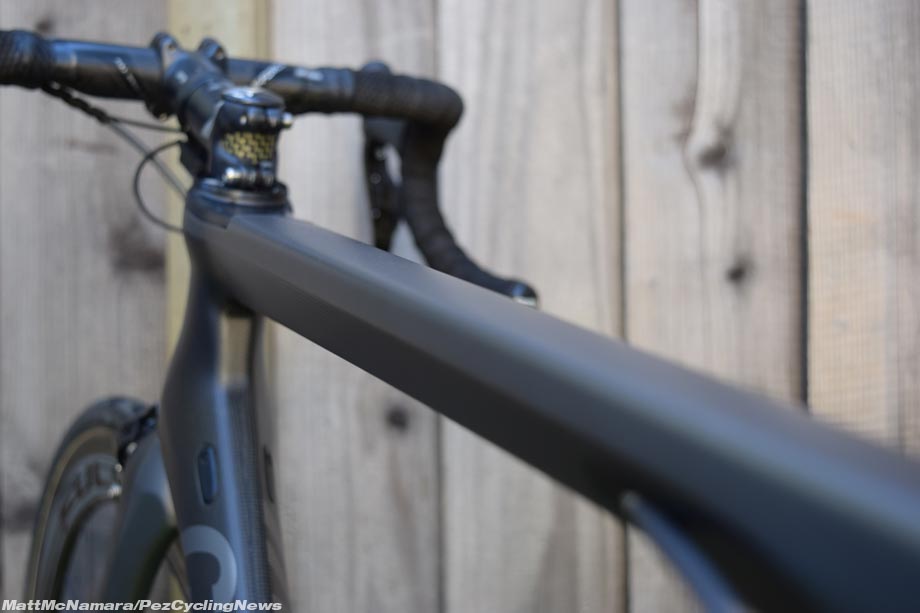 This bike is quicker than either of the other Cipo’s I’ve ridden. Ok, maybe not “quicker” in the acceleration sense, maybe more agile – especially in transition from side to side – it often felt like it could throw you down with just a bit too much side to side whip. Under aggressive front end movement, like sprinting, I occasionally had the distinct impression the bike wanted to dive underneath me. If you’ve ever grabbed a bit too much brake in a corner you know the essence of the feeling, that momentary tuck under. It didn’t cross into feeling dangerous, but it was an added little surprise a time or two.

Perhaps the slightly higher bottom bracket is where the snappy side to side feeling comes from. Hardly skittish, the bike does demand attention as you begin to push harder into corners and sprints…excessive saddle whip side to side is amply discouraged, which turns into more straight line speed anyway, so in a sense the bike is a bit like the stereotyped harsh Catholic school nun, step out of line and you’ll pay the price, keep it on the straight and narrow and your education in sprint eloquence will quickly deepen.

On climbs the bike is always chomping at the bit, eager to open up the throttle and rip. It all starts at the bottom bracket – a massive chunk of carbon and angles purpose built to translate muscle fiber into forward motion. It is heavily reminiscent of the RB1000 in the sweep of the seat tube from the bottom bracket angling up artfully, if slightly less grandiose. Standing is comfortable and the bike likes steep pitches more than shallow ones thanks to all that carbon mass

The Verdict
With the NK1K Cipollini has created a gorgeous work of art that is equally impressive in performance as aesthetics. Not the full out race machine of it’s big brother RB1K, but hardly the Fondo killer of the Bond, the NK1K seems more suited to riders looking for a fun ride on all terrain. It goes up well, it goes down very well, and it carries the feeling of an aero advantage when speeds rise on the flats. The equipment spec is spot on, save the traditional bar and stem, and the construction quality is, once again, second to none.

I haven’t seen a bike that is so seamlessly perfect from tip to tail as a Cipollini, a testament to their commitment to set the bar exceptionally high. Then again with a frame cost in excess of $5,000 it should be World Class. The NK1K represents a top line bike from a top line company. I wouldn’t have guessed such when I first agreed to try one of the Cipo’s a few years back, but experience has once again shown me that when it comes to creating a memorable experience aboard a unique platform that, the Italians are second to none.