We took the Co-Motion Ristretto to the battlefields of Belgium and Northern France, to ride the ‘bergs and pavй in the worst Spring weather the Classics could throw at us. The weather was tough, the riding was tougher… but toughest of all was the bike.

The first thing everyone said about the Ristretto was “Wow! Great color!” I already knew this, since I picked it myself from their huge selection of custom color finishes. It’s nice when people tell you you’re right… The amount of my input in the complete design of this bike went way beyond just the finishing color, and what’s more, I got back a lot more than what I expected from the amount of input I had! More on this later, but the guys from Eugene Oregon do one very meticulous job of creating a bike that that will fit the individual “you”, and is designed for the type of riding you specify. 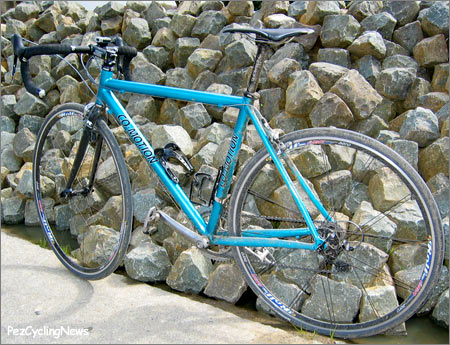 Our “World Cup” test took place on, and beside, the cobbles of Belgium and northern France.

WE BUILD WHAT WE LIKE
Like the name implies, Co-Motion is better known as one of the premiere builders of custom tandem bicycles – which is where they got their start. Dwan Shepard (that is the correct spelling!), one half of Co-Motion’s top twosome (along with Dan Vrijmoet) – got his start in the biz when he was but a young lad, working in a bike shop in 1977. In 1982 he took a frame building class taught by Gary Hale, and ended up working for Gary for the next 5 years, building road, touring, and recumbent bikes – hey you gotta learn somewhere right?

Then came that fateful day in 1988, when Gary decided to take a break from the biz, and Dwan grabbed the opportunity (along with his first partner Butch Bucher) to buy Gary’s machines and equipment. Next day – boom! Dwan owns a bike building company. (Okay – so it happened over 6 months, but you get the jist.) You’ll remember the world was flooded with mountain bikes in 1988, so they were faced with a decision of what to build and still make a living.

Dwan and Butch liked the idea to enter the tandem market, which was under-served, and they both owned tandems anyway. The strategy worked, and they never looked back. In the last 16 years, they’ve grown production from 6 in year 1, to over 1200 units today. And in a specialized market like building tandems, and you don’t get that big unless you’re good. 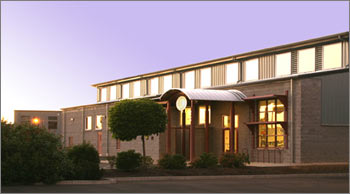 The Co-Motion HQ – you don’t get a nice building like this unless you’ve earned it.

Over the years they added more single-rider bikes to the line – which of course the guys all ride as well. When I asked Dwan what guides their build decisions, he summed it up simply: “We build what we like.” And when someone likes what they’re doing – the end result is always better.

AND NOW: THE RISTRETTO!
In hindsight it’s no surprise that what really caught my eye at Interbike last year, was their single seat top-end racer called the Ristretto. Being a lover of all things Italian, I was immediately intrigued by the name – which translates as “Restricted”, fitting considering its somewhat “exclusive” pricetag. But the model name also appeals to the individuals among us who shun mass produced, mass-appeal bikes… for the masses.

Co-Motion specializes in custom built frames and bikes, but they offer so many size variations (15 just for the Ristretto) that there is something to fit just about every rider without incurring a relatively modest “custom-build” fee. These guys know what they’re doing when it comes to sizing, and this was the first thing that stood out for me. 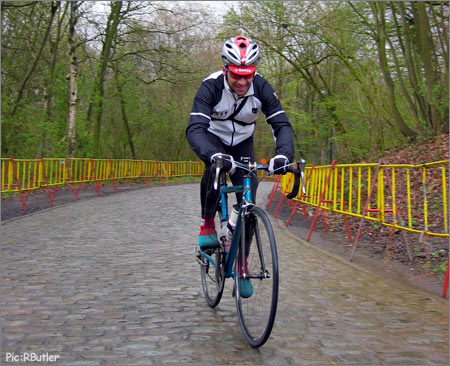 We started the build process by my completing their Fitting Form, which has about 12 detailed body measurements like height, weight, inseam length, and reach, and a few I didn’t expect, like wingspan, thigh length, forearm length, and a few more. Dwan clearly knows what he’s doing when it comes to applying these measurements to building a bike that fits. We talked on the phone a few times about the types of riding I like, don’t like, what bikes I’ve ridden, liked, and didn’t like, and of course what my intended use of the Ristretto would be. 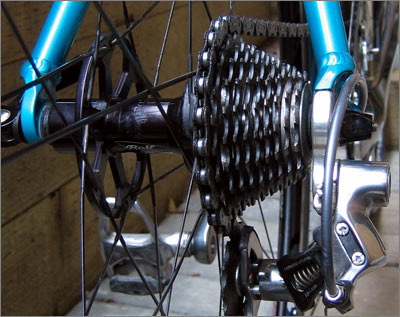 Count ‘Em! 10 speeds, courtesy of Shimano Dura-Ace. The 12-23 cluster was great for the flat riding of Belgium – I was never without the right gear. But the gear ratios are a little tight for more hilly terrain, like Vancouver, where I’ll often shift 2-gears to maintain cadence.

Some of you will remember this one – the Ristretto was to be my trusty steed as I mounted my first invasion of the Belgian Spring Classics – Flanders, Gent-Wevelgem, and Paris-Roubaix. The bike needed to be tough, light, and versatile – I was riding it through the Hell of The North – fierce winds, driving rain, Wonderbread-sized cobbles, ancient climbs that pitched upwards of 20%! I expected to give this bike a pounding like never before, and really needed it to hold together.

Every Co-Motion gets one of these – a highly detailed drawing complete with all the specs and measurements of the bike they’ll build for you. The actual drawing they sent me was much bigger.

FIT FOR A KING
The bike arrived at PEZ WorldWide HQ just days before my Belgian journey, with only enough time to build it up, and break it back down for the trip. With no time to dial the bike in, I wondered what I’d be in for. Surprise indeed – our first ride was the Tour of Flanders cyclosportif ride (you can read about it here ) and I was immediately impressed with the FIT of this bike. This bears some words because Dwan actually changed a few things for me, based on the Fit Guide I sent him, and our conversations. I was skeptical about his suggested changes to my position, but ended up very impressed with his execution and interpretation of what I needed.

This bike felt like it was fit to me instead of vice versa. Basically he suggested a longer stem and higher handlebar position, which I was pleased to discover was pretty darn comfy, and made riding in the drops even more fun. You can choose between flat top-tube or sloping geometry. 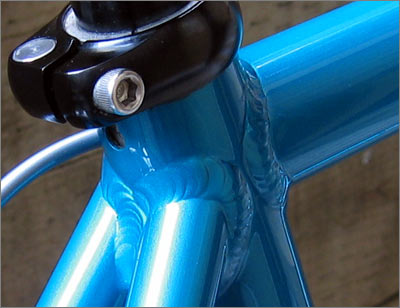 If you like to see the welds holding your bike together, you’ll love the uniformity of these. Believe it or not, these were made by a man – not a machine.

SHUT UP AND RIDE
Undoubtedly, the best part of the test was (as usual) the riding. But tougher riding conditions I have rarely seen, and let’s face it, if I’d been at home, I’d have gone straight back to bed if faced with some of the weather we had in springtime Belgium. Regardless of weather, riding in Belgium is not to be traded for anything. 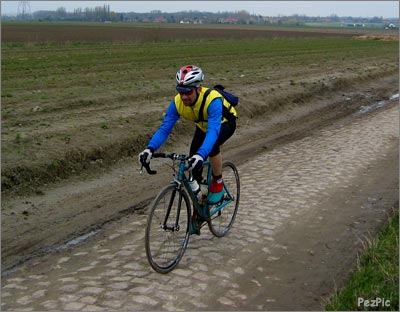 I rode the bike on the pave of Flanders, the Kemmelberg, and Paris-Roubaix, and through countless spring showers, cow dung, Belgian mud and north sea winds that must be faced head on to be believed.

The fat Easton Ultralight 7005 double-butted aluminum tubes and beefy welds add up to one stiff frame, well-suited to serious racers. It behaves the way you want a race bike to – it accelerates quickly – no doubt the sub-16 pound bike weight had something to do with this – and handles like an old 7-Up ad… “crisp and clean (mwhahahahaaaaa…!)”

Nice Curves. Co-Motion bends the seat stays to their own specs in house.

Ride comfort is aided somewhat by the carbon fork and curved stays, and if you’re used to a super-stiff aluminum ride, then you’ll likely find this set-up a little more comfy… for aluminum. The Ristretto on test came with a straight Thompson aluminum seatpost (capped off with a Selle Italia SLR saddle – 0ouch!) – which provided the perfect conduit for the full pave-pounding straight into my butt, spine, cranium, eyeballs, teeth… you get the picture. On longer rides I felt a bit more road-fatigue than on a full carbon frame, so I’d probably add a laid-back seatpost (maybe carbon), and carbon bars and stem to smooth things a little.

The Deda aluminum bars and Ritchey WCS aluminum stem provide excellent information about the road conditions – but personally, I don’t need that much info! In anticipation of riding the cobbles, I (perhaps foolishly) single-wrapped the bars in extra fat tape, but after 11 sections of Roubaix’s finest, my hands, arms, fingers, shoulders… felt like I’d been playing marathon chew-toy tug-o-war with a pit-bull on speed. My guess is this is unavoidable at Roubaix, regardless of your set-up.

I said this once, and I’ll say it again: “You hope your trusty steed doesn’t self destruct like the clown car at the smash-up derby. The only sound louder than your own cursing, is the cursing your bike gives you. You’ll hear sounds you never knew a bike could make – remember – every bike protests the cobbles! But after all that, the Co-Motion Ristretto emerged rock solid. The Rolf wheels held fast, and even though I half expected to lose a spoke or two, they are as tight and true as when we started.” 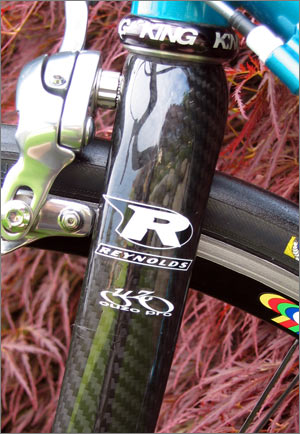 The Reynolds Carbon Ouzo Pro fork takes on the bumps with no noticeable flex or wobble. Seriously tight, but on the pavй, I was hoping for a smidge more forgiveness.

That was a tough week in extreme conditions of wind, rain, mud, cobbles, and the Ristretto weathered them all. Honestly, I fully expected something to fall off, break, come loose… even chip. But it hasn’t happened. Dwan Shepard and the guys build a tough bike, and although aluminum is not my first choice to hammer over the pave, there’s a lot to be said for riding a bike that you can trust to get you home from wherever you go. 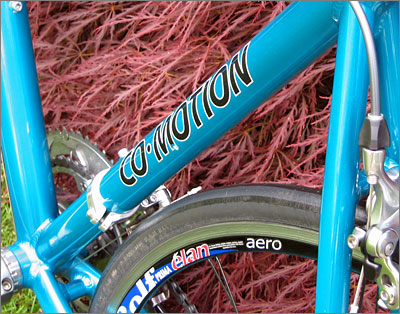 The rear wheel is snugged in nicely near the seat tube, setting you up for good power on the climbs. 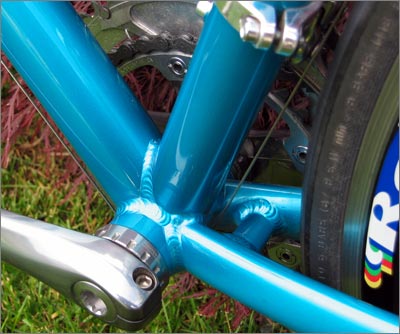 Beefy tubes and sure-fire welds keep the bottom-end stiff, so you your power goes just where you want it.

Prices: You can pretty much build up the bike any way you want, (ie: sky is the limit), but expect standard prices from $1725 for frame/ fork, to over $4500 for the bike kitted out with the new Dura-Ace 10-speed.