A bike test and GASP! It’s not all Carbon! It’s not Ti and Carbon. It’s (Insert music from Psycho’s shower stabbing scene) Mostly Aluminum! And (insert Shriek from latest scary movie) It costs less than 4 grand ready to ride with high end groupo (depending on the build…).

I would watch for it to start raining frogs pretty soon… 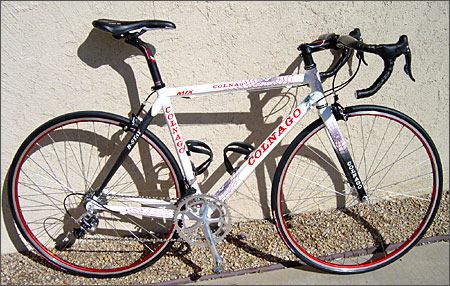 I was supposed to be writing a test for the new CT-2, but alas, none was readily available. My ass is just plain spoiled, as the last two bikes to grace my fanny were the C-50 and the Kuota Khan, and they go with my standard bikes (any of which cost more than my first three cars combined…). I am so damn spoiled that I didn’t get excited about the latest thing from Colnago. (And as you’ll read, I was pretty stupid not to be excited)

Then I got the first email picture and thought, “Hmmm, really cool shaped tubes”. Then I hear that the one they had to send in size “midget” had the sweet looking spider web Paint scheme (rare…) with upgraded Force fork, painted to match. I also noticed that the FSA stuff that landed and needed a home was all Carbon, with red and white accents. To top it off, the bike was going to come with a set of Red Colnago Excellence rims laced to the super smooth (and nice and quiet) record hubs in a great “classics” spoke pattern…

When it arrived and I added the bars, stem, post and Saddle, I realized that this wasn’t a simple Alu-Carbon bike, but something a little more. The FSA stuff really set it off.

So, what is under the web?
The Colnago comes built in the same Airplane tubing as the Dream HP. The difference is the rear end on the mix has oversized Aluminum Chain stays to keep the backside nice and stiff, while the Carbon B stay seat stays get the job of making Big Bore aluminum not be a big back ache…

Once out of the box and unwrapped, it became obvious that, just because this was an affordable frame and fork, that I had underestimated the work that went in to it.

The tubes are a lot nicer to look at than the pictures at the Colnago site. Both the top and Down tubes are heavily worked and look great compared to some other boring tube sets available.

The Top is flat sided like their Master tube set 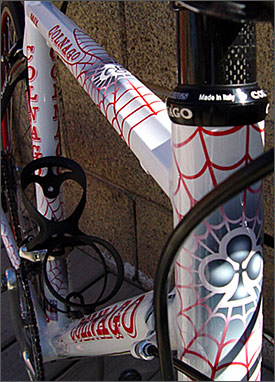 The Down tube is the profile of the Dream. The call the shape bi-conic, but it looks like several cone shapes are there. Basically it’s a bunch of rib sections running the length of the tube, and it’s all cold worked… Very god stuff. The cross section at the Bottom bracket is very large and very stable, and all of this mates to an oversized seat tube that adds to the stability down low. 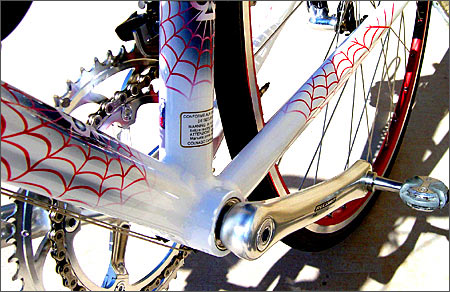 The seat stays snuck up on me as well. They are actually larger than several of Colnago’s competition in the ALU/CARBON game, and they are also nicely shaped. 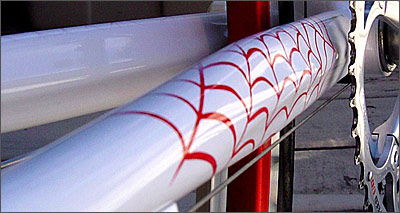 Colnago have an updated front end on the New Mix as well. Not only does it get the industry standard 1-1/8th inch front end (not hidden head set mind you), but it also gets some good height. That’s nice as most folks have to use lots of spacers (and too much flexy steer tube) in order to have the bars up where they should be. The Head tube is also where the cool factor starts to pump up on this bike. 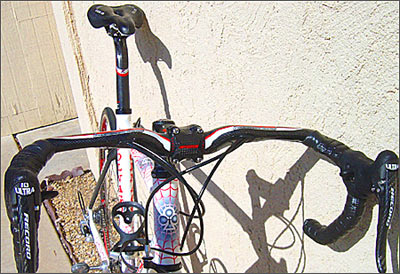 The Paint scheme had lots of fans, and even the people that didn’t love it got caught taking a second (and third and fourth) look. On a white back ground, the Blood Red and grey web design stands out and the detail is what everyone expects from the company that provides the best paint scheme’s in the business, hands down. You won’t find cheap sticker graphics here. Just hand air brushed design under clear coat.

To slope or not to slope?

The Geometry is a sloping design that is also a little new at Colnago. What strikes me as a little funny is, even with the flash paint, sloping design and larger head tube, this bike still has a little old school flavor and style. Holding to that style, this rig also comes in plenty of standard sizes.

The traditional Clover on the front, and Ernesto’s staying true to better function before fashion (no hidden head set is a good thing people…) are reminders that this is a Colnago. Of course the big red “Colnago” down the side helps identify it, but they could have left that off and I would still know where this bike came from. I like that there are touches of shaping and design all over this bike. Not many competitive bikes have any of the features that would let me identify them with no logo’s, but this one says “Colnago” long before the name goes on…

Stability was fine. The Forks for Colnago are good stuff, and the angles are not worth mention (they are fine too). The very god Bars and Stem made for a front end feel that was very good, and at speed this bike is very smooth.

The Mix makes me think that I now know what an S works e-5 Aluminum would ride like if you made the saddle out of 10 pounds of that memory foam bed stuff (without feeling the weight). I liked the way that the Specialized took off when you pedaled it, but while it wasn’t over the top bad, I wasn’t a huge fan of the vibration (and noise). It was a stiff bike that took off like a rocket, but not something I would want to ride every day, or on a bike tour. The Colnago Mix is like the S works, but with less road Buzz. It is also, (and I have no idea why) quieter than other aluminum I have been on. It reminds me of Bianchi’s light weight bike that is foam filled, in that you don’t hear every little bump (or feel it) as much. 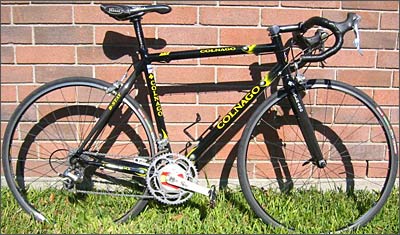 One look at the cobbled classics and roads like this (below) and its plain to see that the Belgians obviously skipped “road making day” in school, but went for the extra credit in “Cold”, “Mud”, “Rocks” and of course sweets and Beer. But no problems for Greg this year on the mix…. 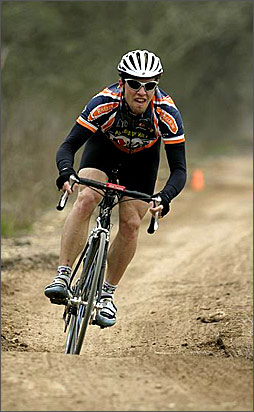 This bike made it ok to ride on Aluminum, plain and simple (that is not a small admission for me…). You still have road feel through your hands and, while standing on the pedals, the acceleration is there along with some road feel. But the mix didn’t have the “riding a paint mixer” feel of the last few Aluminum (with carbon chain stays or not…) bikes I was on. The last bike that did that was the Pinarello Prince, and this is as good a ride as the prince (or Dogma!) and at a price point that basically gives you a thousand bucks rebate…

I don’t want to imply that this bike rivals the C-50 in smoothness, but comparing the two isn’t a fair comparison (as only a couple other bikes do compare, and they all cost way more than the Mix). But it does feel very good when compared to other Alu Carbon bikes on the market (and a couple of Ti and Carbon rigs too). It’s stiffness is on par with Aluminum-only bikes built to tear up the tarmac (for a season or two max), but usually lacking in any comfort at all. If you want something to shred pavement without shredding your nerves, this goes well. If you get lucky enough to add the top of the line bars stem and post that this has, you will be very pleased.

The Fact that Colnago seem to be one of the few companies around that feel like making bikes in lots of sizes is a bonus too. I have a bit of a chip on my shoulder from companies that only make a hand-full of sizes. Word to the other guys; Not everyone fits a small, medium or large, and asking people to spend several Thousand dollars on a frame, then compromise with wacked out stems and saddle setbacks is a shame. It would be great if more folks made bikes in all the sizes Colnago do.

What also goes well is the price. I have seen it as low as $1,700.00 (with the Street Carbon fork) and built up with full Campy Record for just under 4 thousand. Looking at competitive bikes from Italian stable mates Pinarello and De Rosa or a Merckx Race, the Colnago saves 3 to 5+ hundred bucks (depending where you shop) and is as good or better than bikes with far more hype (and cost). High end Alu-Carbon bikes are a dime a dozen. This one stands out a little more in the looks department, gives you all you want in the stiffness and acceleration game and has a better ride than many of it’s “built like” competitors.

The fact that you can be on the road with a new Colnago Full Record ripper for a little under 4 grand (bike as shown is more $ than that) is a cherry on top.

Where to Get ‘Em
CBIKE.com

Also make sure that if you are in the USA that you buy Colnago’s from someone who got em at Trialtir (the Official US distributor), unless you want your warranty to be almost worthless…