So much better with so little! Adidas have come up with the Carbon fiber Tubular superlight wheel of eyewear! No frames or view obstructions and weight so low the UCI are probably pissed off. I love these specs! 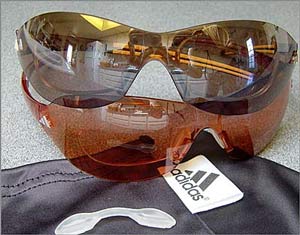 Walking through Interbike, there are so many sets of glasses that they almost become invisible. Each time I looked at another booth with glasses, all I could think was “this is the same crap every year”. A bunch of companies designing glasses with one thing in common in that as soon as you put them on, you look an awful lot like a wanna be spaceman X gamer who should be base jumping out of the back of an Xterra you have just driven off a cliff while listening to what ever the hot (but totally cool no sell out dude…) type band of the week is. And the second you get more than 6 inches away from your bike, you look like an even bigger goober.

I don’t mind the features built into some of the “bug eye’s” out there. Adidas have a line called the Evileye that are super performing glasses with very usable features that I love (we will review them next)! Adidas Evileye’s look the way they do as a result of function, unlike some of the crap on the market… But what brought me into the Adidas booth was, uh, well, a Burrito.

I had been walking for hours without food and I noticed a guy about to bite into a burrito and I just happened to notice the guy next to him holding the slickest Prescription eyewear insert I had ever seen. I then watched him snap it into a set of super sleek Shields and I had to take a closer look. What I got was a peak at the cleanest glasses and prescription set up I have ever seen.

Adidas Shields come in a few styles; Shields L and S (large and small profile), I-Guru and Cubic Lush. They vary in style, but all feature flex zones that let the glasses and very nice griper areas kind of form up to my head. They also are made from a durable SPX Material in the arms (Adidas say it’s break proof). The arms are a snap out type that have proven very useful, as I sat on my set and the arms gave way, but plugged right back in. And the build quality overall is high (without being overdone like lots of glasses) 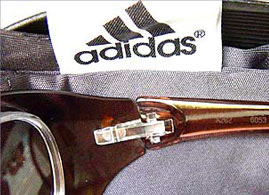 The lenses are Polycarbonate (very strong and very clear), with “Decentered Vision Advantage”. That’s a patented shaping (similar to other high end shades) that means that although the lenses are curved, they are curved in a way that means you are still looking through a fairly flat surface with very little distortion. They are also 100% UV blocking (pretty standard) and since they are “shield” form, there are no rims or bridges. Just clear viewing area…

But what sets these glasses apart for me were the Performance Inserts available for adding prescription. There is a rimed and rimless version available and both are top notch. 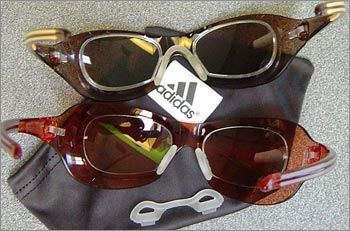 It’s pretty evident which is which. The Rimmed type snap-in in place of the standard nose bridge. The rims are very slight, and just enough to hold the snaps and lenses. They are also curved to allow for very low distortion.

The cream of the crop are the very new (not at market yet) Rimless Performance inserts! They have no outer frame to obscure view and also sit closer to the glasses (away from your face). It just feels far less crowded, and the view is super clean. 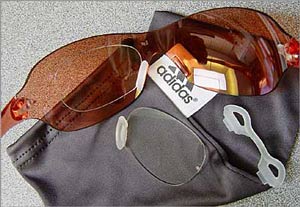 Neither of the inserts makes much “noise” visually. From the front, people can barely see them. And the sets weight almost nothing!

But the Rimless are simply damn near invisible and when you wear them, they basically disappear. The inserts are even less visible to others when worn because your head blocks the light from the back shown here!

I think this is a cleaner set of scripts shields than anything else available. Oakley have a system where they will add a script into a lense, but there is no swapping out for different light conditions, where you can take this system from one set of glasses to another cheaper than you can get multiple lenses made from Oakley.

I also like the fact that Adidas team with a top flight optical company like Silhouette. It’s nice to have “made in Austria” stamped on your frames and see the CE certification on the insert frames. Basically I would rather spend about the same amount of cash (or less) with no nonsense companies like Adidas and Silhouette that put loads of cash into developing top quality Optical tools for your head, rather than some “totally radical dudes” who spend all their time designing frames that make you look silly and do the minimum required for the lenses. Worse yet are the folks who design prescription inserts that have more rim material than would be acceptable to any of the cast from revenge of the Nerds…

I love these glasses. They block the wind enough and are slight enough to allow for ventilation. The view is best in class, without exception. And the weight, even with inserts, is so low it’s irrelevant (far better than my other glasses with inserts).

Hop over to the Adidas folks at www.adidas.com/eyewear Take a peek at the other styles (there are lots) and check out the Evileye pro that will be up next!

WE HAVE A CompuTrainer WINNER!