I wouldn’t guess that you’d pick a bunch of die hard cyclists from the state of Washington, because I sure didn’t. But that’s classic FSA… they’ve just quietly gone about making great parts for years, and this looks like the year they make some noise! 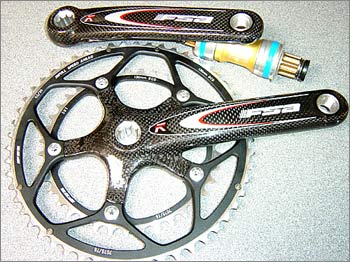 I met up with them, had a chance to poke around the place, and found out a lot more about the guys than I thought I would. As a group, they have just shy of a bazillion years in the business from design in wheels and components, to racing, sales and the like and just added to that by acquiring the guys at VisionTech that make TT bars etc. I try and leave personal names out of stories like this so the weasels who call companies direct in the hopes of saving .22 cents on a set of QR’s by giving Bike companies a bullshit line and a Tax ID number don’t call and ask for people directly. Suffice it to say that “The names”, new and old have been around a long time and have had plenty of success at FSA and other companies, and to a man they are cyclists and fans first, which is why they are so good at what comes second and that is producing very good parts. 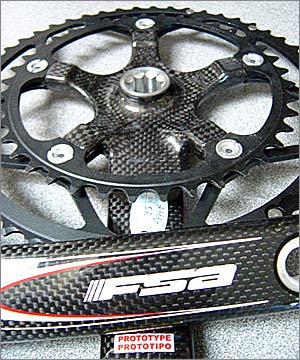 The common stuff will be around. Anyone seeing our reviews here or spending any time in the midst of high end gear will recognize the Cranks from FSA right away. The last few years have brought crank sets that were as good or better than units costing far more and in some cases not performing. We have used FSA cranks on most of the test bikes that came through (and any bike that did not come to us built up), because dollar for dollar they are exceptional. As a matter of fact, regardless of cost they are still my personal choice. Two pics here are their next generation set that we had a chance to get a hold of for a while. Also note the standard FSA Bottom Bracket. Isis is really the way to go as it provides far more surface area contact at the crank (a good thing as this is the single most stressed area on your bike). 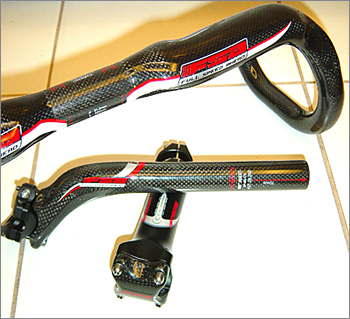 Something you will see plenty of in the Pro Peloton (and will soon see tested here at PEZ) are the various bars, stems and posts available. These are the ultra luscious K Force series and regardless how loud our Editor screams, I am keeping them for myself!!! We will give you the full lowdown on them as the test gets done. 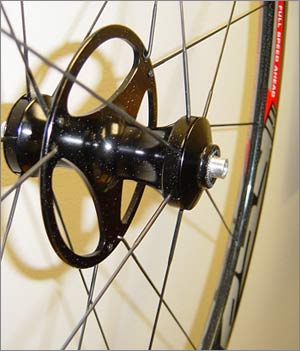 One great new addition to FSA’s Lineup is a natural as they have an incredibly well qualified designer for wheels in-house. They will be working in Carbon and metal, and have already done some great stuff with their hubs. They have a three flange set up that features a center flange that not only shelters 1/3 of the spokes from wind, but can take a load off of the spokes that go to the wide flange sections as well as shortening the spokes needed for the center area. And as for the extra weight of the over sized flange, it is in the center of the rotating mass and doesn’t harm performance in wind up due to the weight, but does help in the area of stiffness and torque. 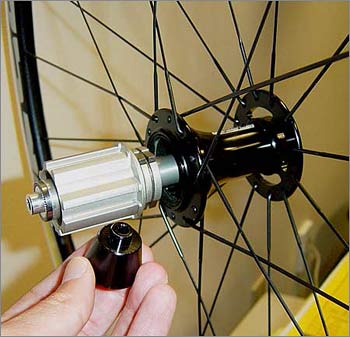 They also have a great freehub assembly that allows a swap from Campy to Shimano that allows you to not have to replace wheels if you go a new route with group sets. 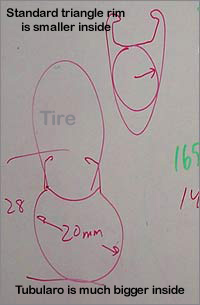 They have one wheel set in particular that flies in the face of the Marketing Bullshit that goes with wheels these days where Aero profiles are mentioned but no real Aero advantage is made. Most mid and shallow rims out there have no real aero properties at all. Recognizing that there was an opportunity to significantly strengthen a wheel by changing the rim shape led them to their Tubolaro rim section. You can get the idea from the pic below that the larger the circle you can fit in a rim shape, the stronger the rim should be, and interestingly enough, the shape has good Aerodynamic properties. This rim design is on the 400 series wheels, and they weigh in at a scant 1450 grams. Not bad for a stronger wheel than many heavier sets from other folks… 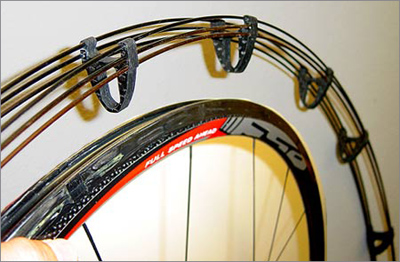 Fresh on all the wheel guys’ lists are Carbon Clinchers and FSA will have them as well as the standard Tubular version. Check out this tech guys dream picture. Note that there is a ton of work to do for a Carbon Clincher, so when you see the price you will have an idea about the extra costs…

Over the next few months you’ll notice the stuff from FSA (and this is a small sample of it…) coating the front of the peloton. Just don’t be confused when you start to look at all the sites from higher priced Euro gear companies and can’t find it. FSA has the strange distinction of being an American company, and so there are those of you here in the states that will think that if it doesn’t have a company name that ends in “ini. olo, elli” etc… and doesn’t cost 30 – 100% more to cover the import and smug factor that it isn’t top of the range.

I didn’t use their cranks on the Colnago C-50 just tested because they were free. In fact I bought them retail when I could have had a set of someone else’s for nothing, and chose them because the bottom bracket in ISIS performs better and the cranks are light and stiff. I also chose them because FSA supply enough product in all sizes (I use 170’s) when other companies tend to use bullshit lines like “special sizes are fairly exclusive” when they really mean “we don’t produce efficiently enough to cover the demand, which means we can also over charge you”… Again, I could have had two other carbon Crank sets for free to go with the full Record set up and chose the FSA’s…

Have a look at the FSA website www.fullspeedahead.com and poke around a bit. They run lots more products (like the super cool Carbon Headset on the Kuota Khan we tested) than we show here. And stay tuned for the bar stem and post test…

Where To Buy ‘Em
Check out GloryCycles.com.

Meet US Postal At Bicycle Ranch