Devinci Cycles’ LEO SL is built for fast gran fondo style riding, has proven itself on the UCI pro circuit, and has been under some long term scrutiny at PEZ HQ – truth is I was having so much fun riding this bike, I was in no hurry to send it back. Here’s a closer look.

Devinci Who?
If you’re Canadian and been around mountain bikes for the past 25 years, you’ll know the name. Devinci Cycles started in 1987 in Chicoutimi Quebec – hotbed of North American aluminum production… and cheap electricity. Originally born as a university project of an engineer and a designer, they built aluminum framed mountain bikes that grew into a popular brand in Eastern Canada. The mtb explosion fueled more growth, and as the brand matured and evolved, more recent expansions include Europe, Asia, and now more than 80 dealers in the USA, including their first road shop at Cycle Works in Atlanta. 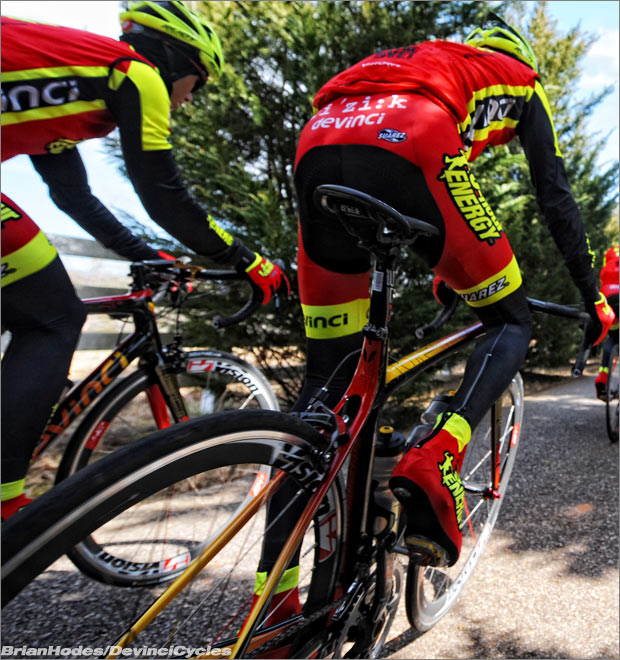 In 2013, Devinci made a serious commitment to the road market with its sponsorship of the 5-Hour ENERGY presented by Kenda pro cycling team (who ride stock bikes), gaining access to top level North American races like Tour of California and their home race at the Tour de Beauce in Quebec.

While their line up of mtbs goes pretty deep, the main model in their road lineup is the LEO SL. Rather than releasing a bunch of half-baked models simply to fill a short term market or dealer demand, Devinci’s philosophy is geared to steady development, holding new releases until they’re 100% ready to roll. So while the Leo SL frameset has been around for a couple of years, it’s been updated for 2014 with new spec (electronic shifting), new colors (and who doesn’t like a new color?), and models offered with a variety of groupsets and builds featuring SRAM and Shimano components, across a big range of prices.

My tester came equipped with Shimano Ultegra gruppo, Mavic Kysirum wheels, Easton bars and stem, and a Selle Italia Monolink saddle. The frameset is used across the whole lineup, differing only by color and component spec – and that’s the same frame the pro team rides. 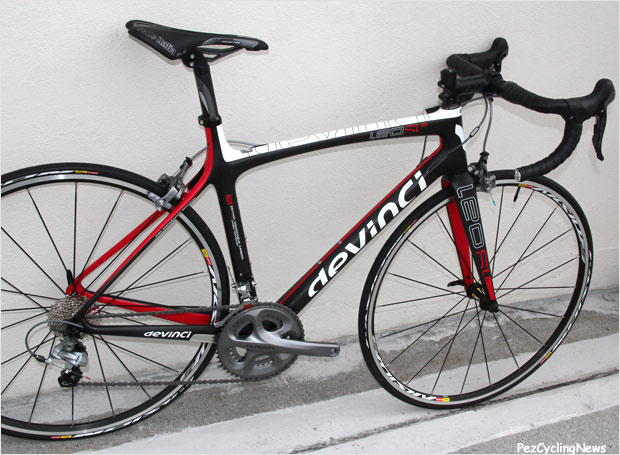 Like It Long Time
I’ve had my tester for a few months and every time I come back to these photos or gaze upon the bike, it just looks better and better to me – the tube shapes and curves could be Italian – such are the pleasing lines of this frameset. And as much as there is meeting the eye here, there’s also a lot more to it.

The Leo is designed as a fast riding road bike, suited to pro level racing (as proven by the 5 Hour Energy Powered by Kenda pro team in the US), fast group rides, or longer distance and more social gran fondo style rides. The business end of the frame is made of a large diamater and specifically shaped tubes – from the head tube through the downtube and bottom bracket and chain stays. This ‘big bottom’ design is popular among top brands because it works so well at anchoring the bottom bracket against the forces you’ll generate while pedaling – and in turn allows a more efficient transfer of that energy to the rear wheel to drive the bike forward. The bigger diameter tubes also offer more area to work with specific layup patterns and carbon types to better tune the ride, not to mention some play area for cool tube shapes and big bold graphics. 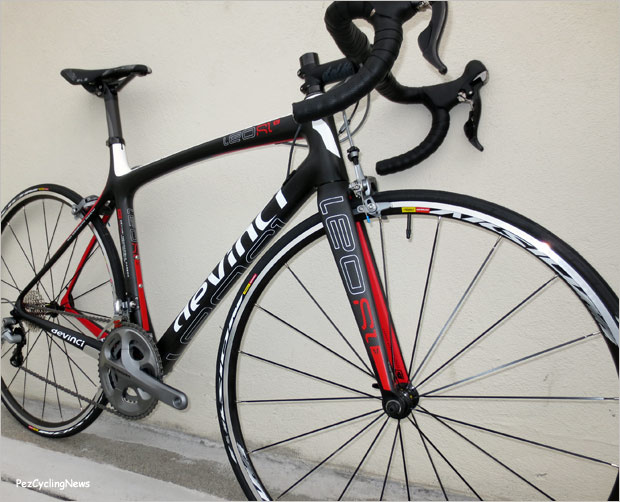 The lines are stylish, without being froo-froo. 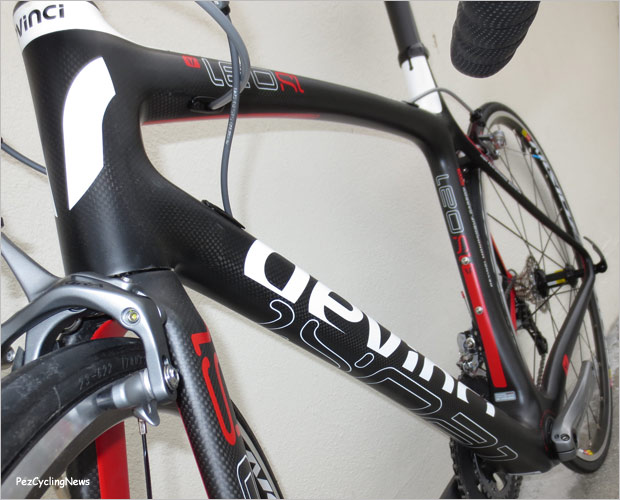 Devinci’s DMC-R HR Carbon
The frame is made of Devinci’s own carbon spec called DMC-R HR (Devinci Monocoque Carbon Road High Resistance). While they weren’t about to share their layup schedules with me, what’s relevant is what they call their Dual Core Fusion design, intended to improve power transfer and lateral rigidity, then improve vertical compliance.

The frame is designed as two ‘cores’ – the Upper core: top tube & seat stays integrated with seat tube to improve lateral stiffness for better power transfer while maintaining enough vertical compliance to take the edge off the ride, and the Lower core – headtube to the downtube through the bottom bracket and into the chain stays – designed to maximize torsional stiffness and power transfer.

It’s important to remember that in this day of advanced carbon fiber technology, building certain ride characteristics requires addressing several variables, each combined to achieve a specific set of ride quality criteria. Things like material selection, fiber orientation, tube shapes and wall thickness all influence how a frame performs and what you feel as a rider. 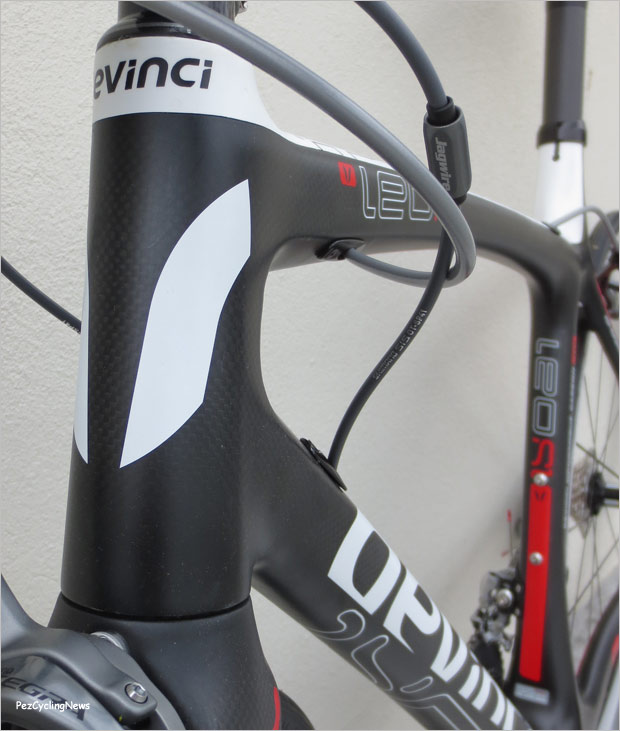 The Leo SL frame is designed as an aggressive gran fondo–style ride with a slightly taller headtube, strong bottom end and more complaint top, with geometry that’s designed for stable control and quick response.  It’s a good choice for performance riders who may, or may not be racers (which is also where the growth of the sport is coming from).

Up close  the Leo SL has a really solid look thanks largely to the big tubes and fat graphics.  The headtube is 155 mm tall on my size Medium tester and almost 2 inches wide at the crown. It holds a standard 1.125 inch top bearing and a huge 1.5 inch lower bearing (which is bigger than you’ll see on most road bikes), and while some brands consider the very minuscule extra grams of weight a penalty, makers like Devinci choose em to maximize stability at the front end. 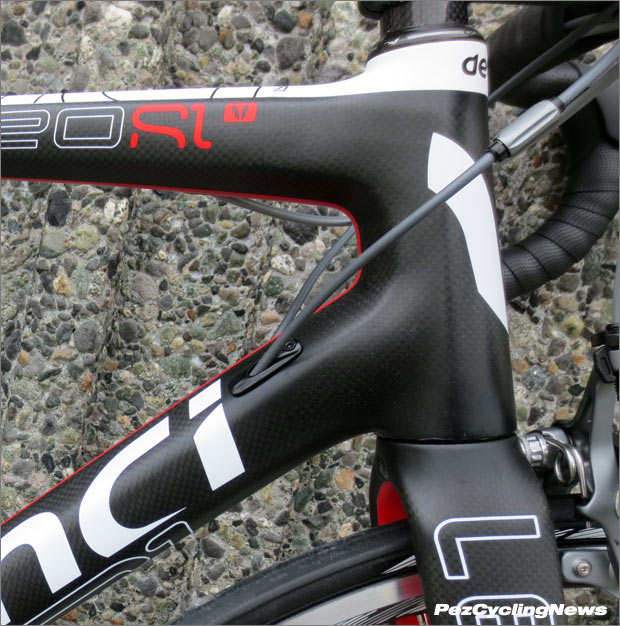 That tall head tube also sets the bars at a slightly higher place than more traditional pure race geometries, but for most guys who’ll like this bike, it eliminates a spacer or two, which makes the front end look cleaner and…well, better.  And while a super low handlebar placement may not be achievable here, I had no probs setting my bars at the right height, and even have room to remove a spacer when my back loosens up by mid-summer. 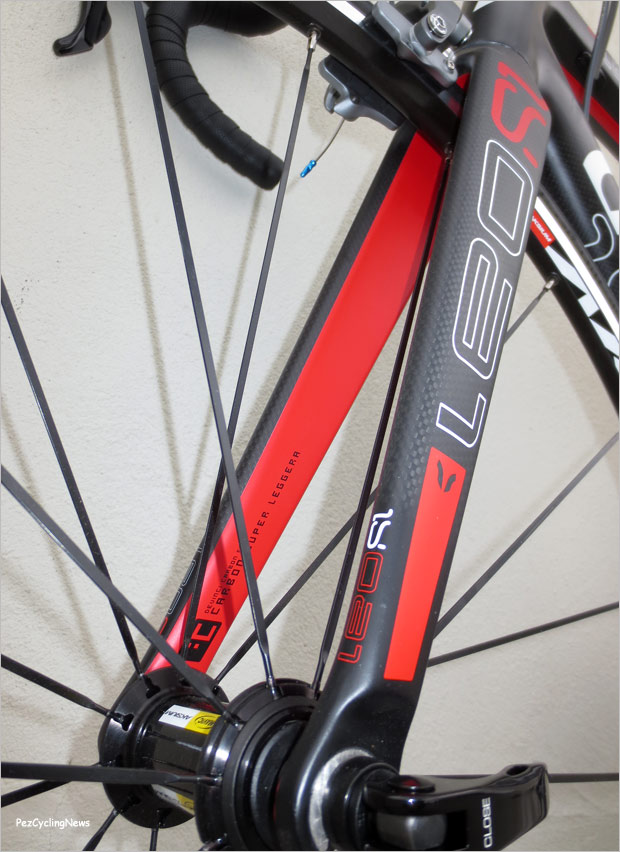 Devinci calls their proprietary fork design the Super Leggera, and it’s been created as part of the overall frame design using the same DMC-R HR carbon as the frame. Drawing on their roots in mountain bikes, building in descending confidence was integral to their overall design. As Devinci’s marketing manager David Régnier-Bourque told me: “In Québec the roads are terrible and we have really steep descents, so we needed to have a bike that could perform in this environment.”

Stablity and control are not lacking here.  The blades are straight, and substantial, so flex in any direction is minimal.  The look is strong and inspires confidence, while the shape is smooth and uniform so adding fenders or sensors is no problem at all – (unlike some other fork designs where a fancy shape just won’t hold fenders correctly). 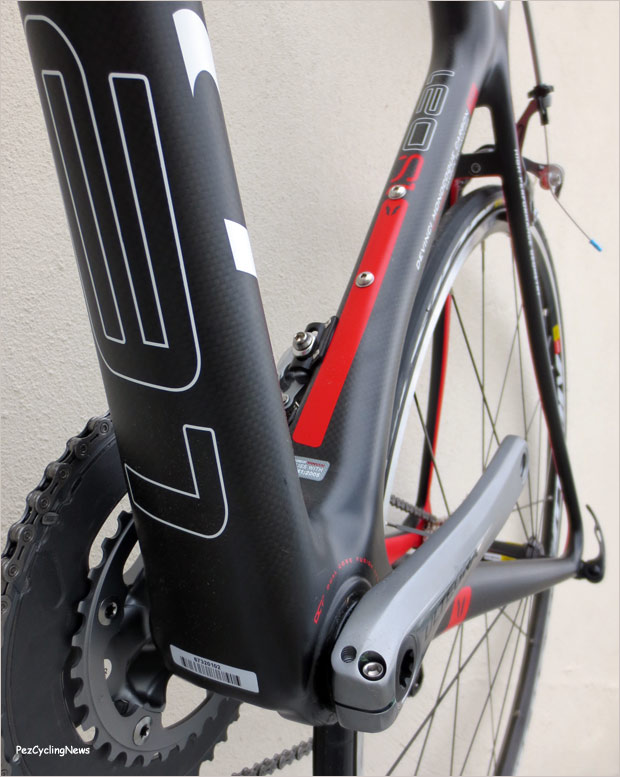 The width of the down tube and the wide flare of the seat tube add to a very stable bottom end.

The downtube merits notice because it’s just so damn big – it’s almost 2 inches wide at the headtube, and flares to almost 3 inches wide oval-shape where it meets the bottom bracket shell – which holds a wide BB86.   This massive BB section is standard for any marque looking to build a solid bottom end,  but the larger platform also allows more design possibilities as an anchor point for all the tubes that meet here.
But that’s not all…

The down tube is specially shaped to maximize stability of the BB – while the drive side of the downtube is a straight shot from the head tube to the BB allowing clearance for the chain, the non-drive side flares slightly from the headtube all the way to the widest outboard edge of the BB – shaping clearly designed to increase stability down low. 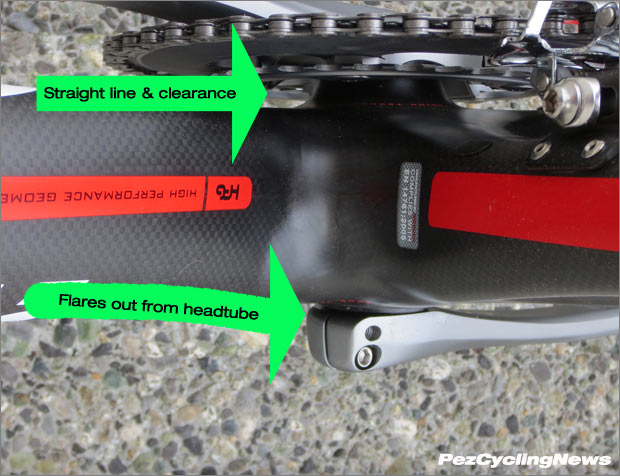 The side profile hides none of the girth… 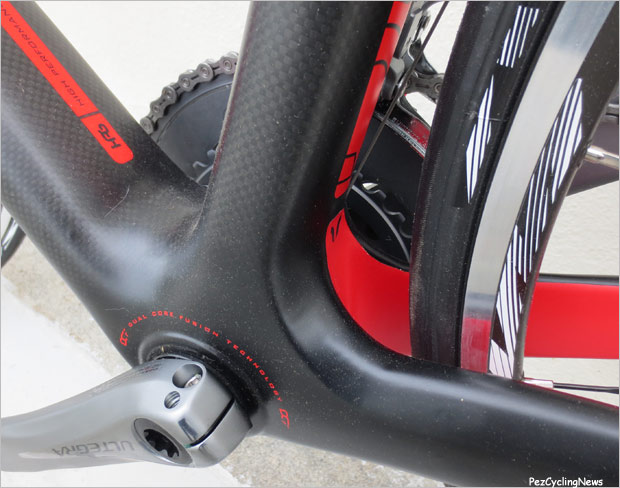 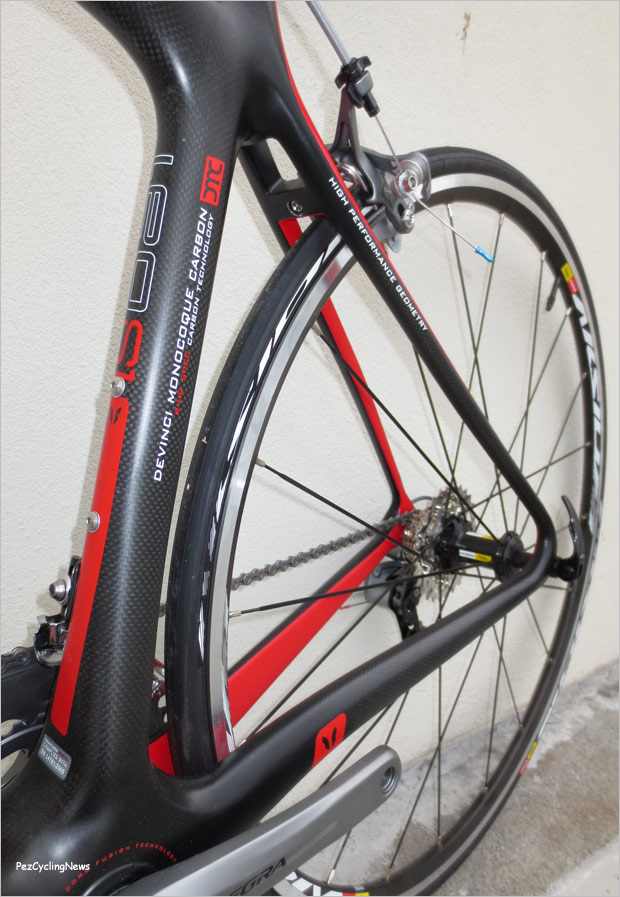 The rear triangle shows off some impressive tube shaping of its own… The seat stays are thinner to soften the ride, while the curved elbow at the dropout allows a smooth transition of forces from the axle along both stays, engaging the entire back end in handling forces from both the rider and the road. 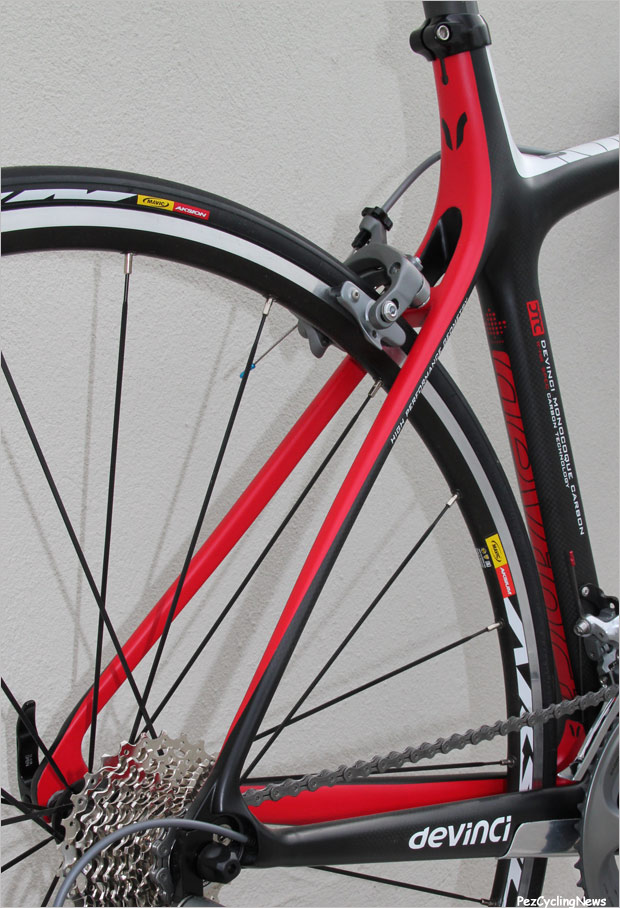 The non-drive side rear stay is noticeably fatter than the drive-side, and swoops aways from the BB, while the drive-side stay is straight and slightly narrower to offer crankarm and foot clearance. 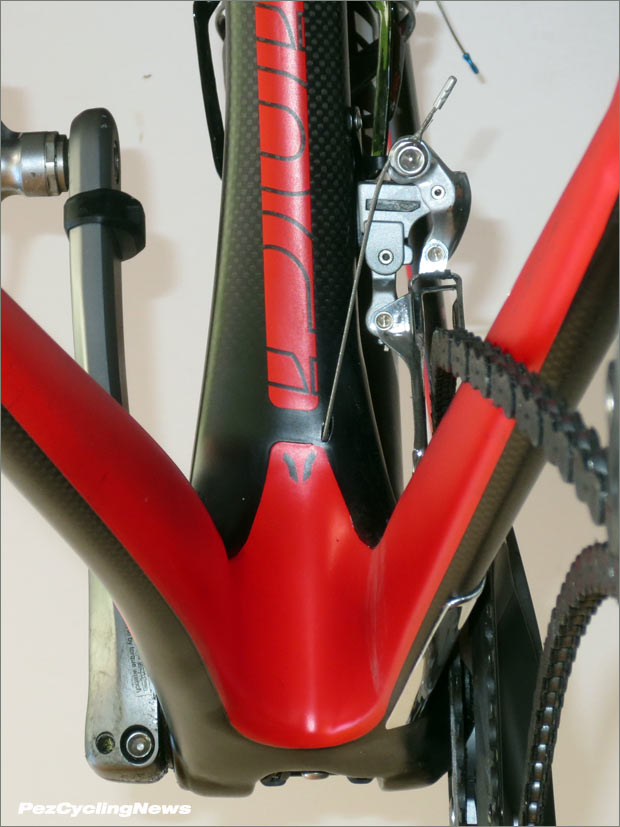 The differences are easy to see from above, and while the whole thing might look off-center, the rear wheel is perfectly placed in Devinci’s own design that makes the most of available space and surface areas to build a very stable bottom end. 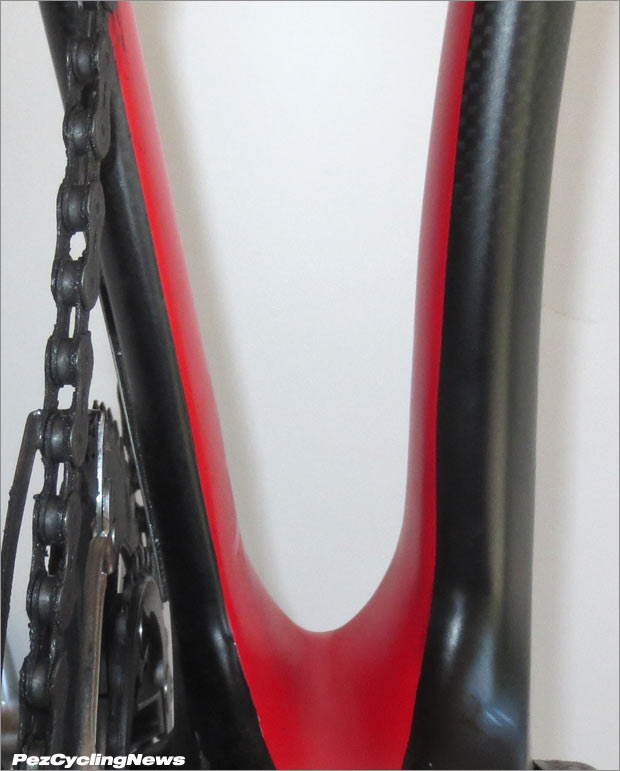 RIDE IT
My last few review bikes have all been of the ‘fast gran fondo’ genre – generally defined as speed-oriented bikes with taller head tubes to better fit the growing demographic of riders who simply don’t want to ride in a super-aggressive pro-like position. Although I’ve no actual sales data, based on the number of gran fondos popping up each year, I’d guess this is the fastest growing category for road bikes.

The stand out part of the Leo SL’s ride is the solid feeling of control and responsive handling. It’s not a new thing and I’ve talked about this before in recent bike reviews, but current designs of the big diameter headtube – downtube – bb – chainstays have created a new level of ride quality in recent years. The bottom half of the frame creates a stable platform to assist in directional control and power transfer, while the top tube, seat tube and seat stays can move enough to smooth out the ride to a nicely comfortable point that should suit just about everyone this bike is aimed at. If I had to define the overall ride in two words, I’d say “solid comfort”. 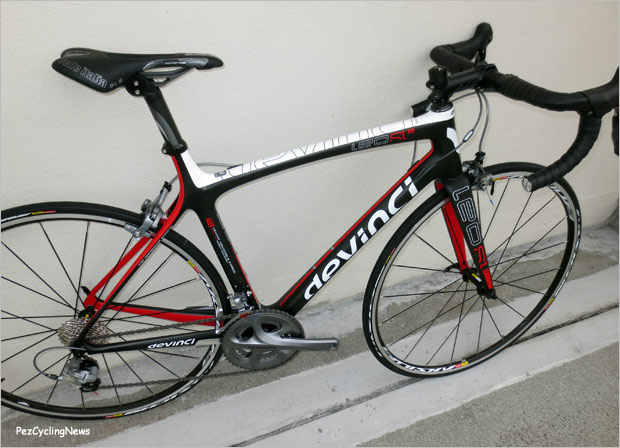 The solid front end – starting with the strong and rigid straight bladed fork designed to handle Quebec’s rough back roads – keeps the bike going where it’s pointed, and makes for very stable descending, and inspired confidence through turns. The 73 degree head tube angle helps out here too.

That stability is also influenced by geometry that includes slightly longer chainstays (410mm), while 74 degree seat tube angles. None of these measurements are extreme, but each one is near the end of the scale that typically aids a more stable ride.

Climbing whether seated or standing presented no issues, the bike is as eager to go uphill as your legs are.

For 2014, Devinci moved to a dual rail saddle and a new seatpost of their own design (that features internal battery mount for electronic shifting) that really upped the comfort level over the original spec Selle Italia Monolink my tester came with – never under estimate how much you can change up ride qualities with saddles (and wheels). Of course bars, bar tape, tires, and tire pressures also make a difference, but those are the two most noticeable in my book.

I swapped out the stock wheels for my ‘in-house’ testers – American Classic Argents – and shaved almost 500 grams from the overall bike weight. I’ve run so many miles now on these wheels, that it simply allowed me to better recognize the frame’s performance.

The Leo SL hits the mark as a fast gran fondo style bike and at a big range of price points that vary with spec levels (from Cad $3500 – $8400, full bikes; frames sets are $2000 Cad), Devinci has a model that will appeal to a lot of different types of riders. The 5 Hour Energy Powered by Kenda pro team is proof this bike can be raced at the top level, while the Leo SL entry level models run the same frame, but just different component spec.