Elite are one of those instantly recognizable brands to cycling enthusiasts. The company have a virtual lock-out on water carrying in the pro peloton, they’re a standard setter for embrocation, they’re making great transport and storage products and, yeah, they’ve been making top line trainers for a long time. Just in time for the winter slog, the Italian brand’s US PR folks dropped their latest Elite Direto direct drive trainer at my door for a quick look and spin… 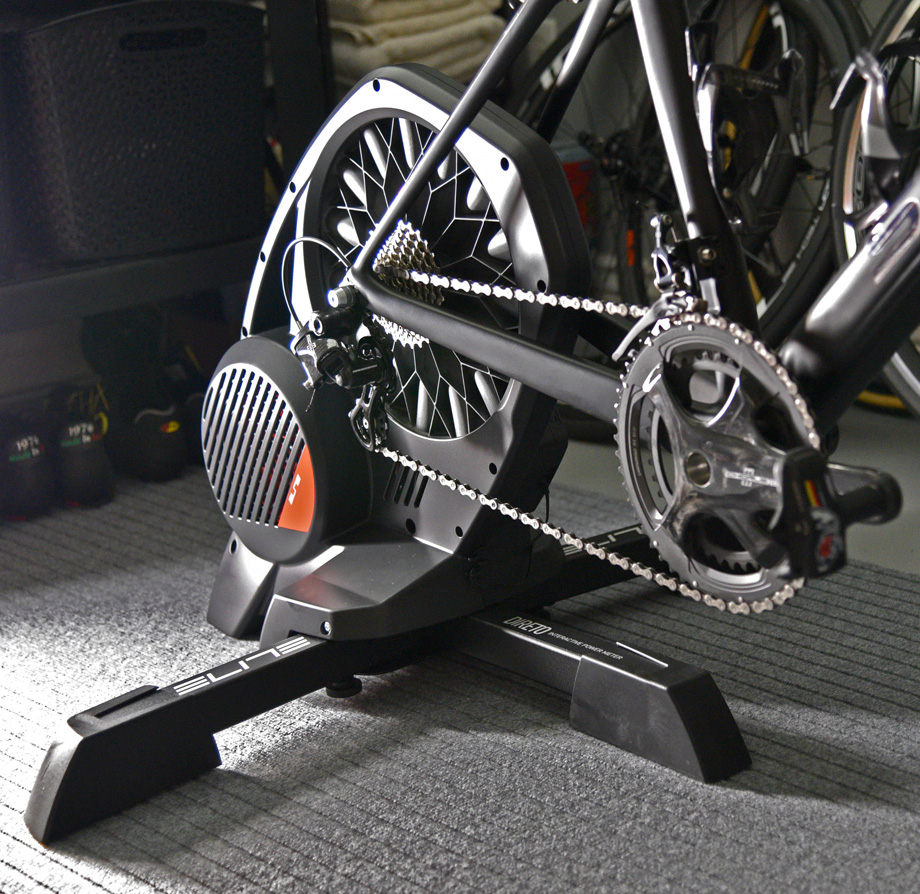 So… I hate trainers.

That said, a good trainer is pretty much a must have for anyone genuinely into cycling and one thing’s for sure, trainer tech, performance and entertainment values are massively better today than a few years ago.

For that amount of cash, you would expect corner cutting in hardware and function, but this is a solid piece of equipment. 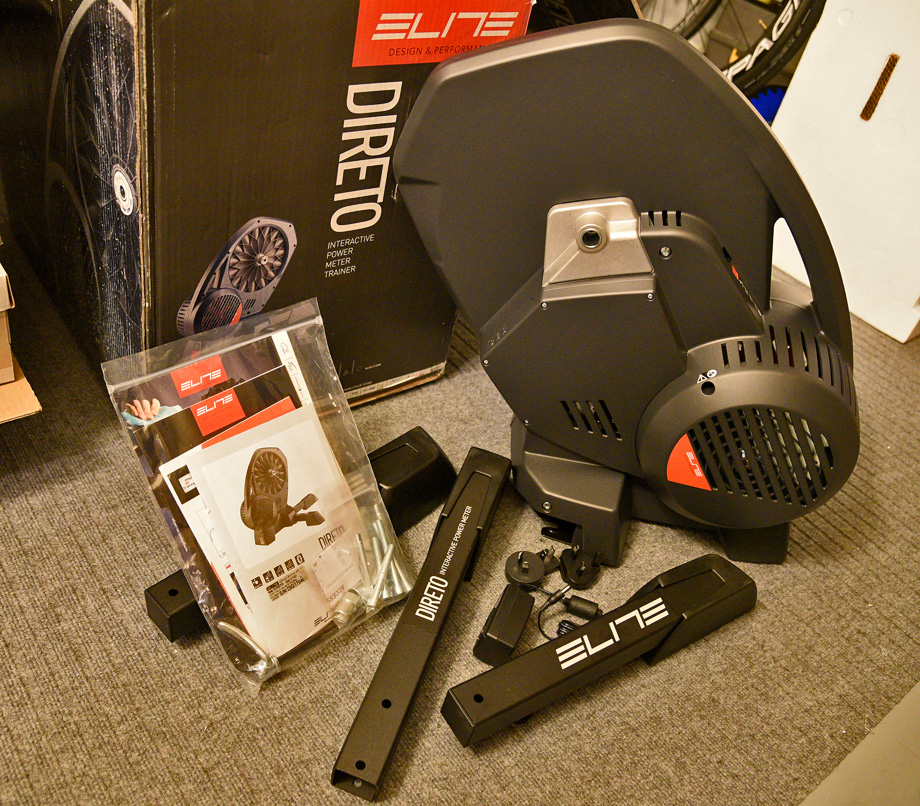 The build of out of the box takes a couple of minutes… A hex head wrench gets most of the job done, screwing the box section legs into their swivel point. 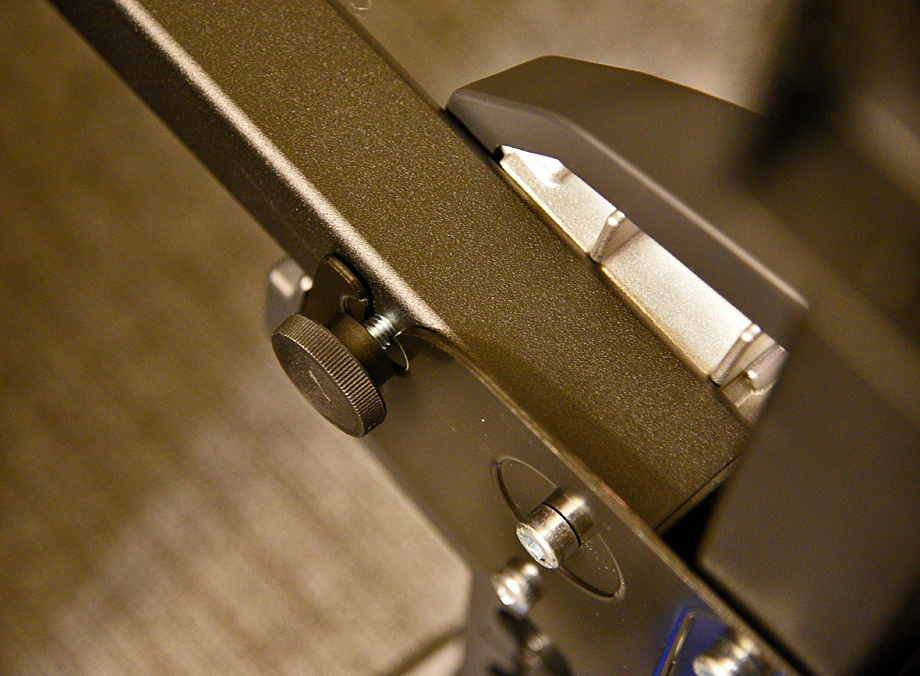 From there you pick your axle type and in the case you’re running old drive trains. You’ll add a freehub spacer. 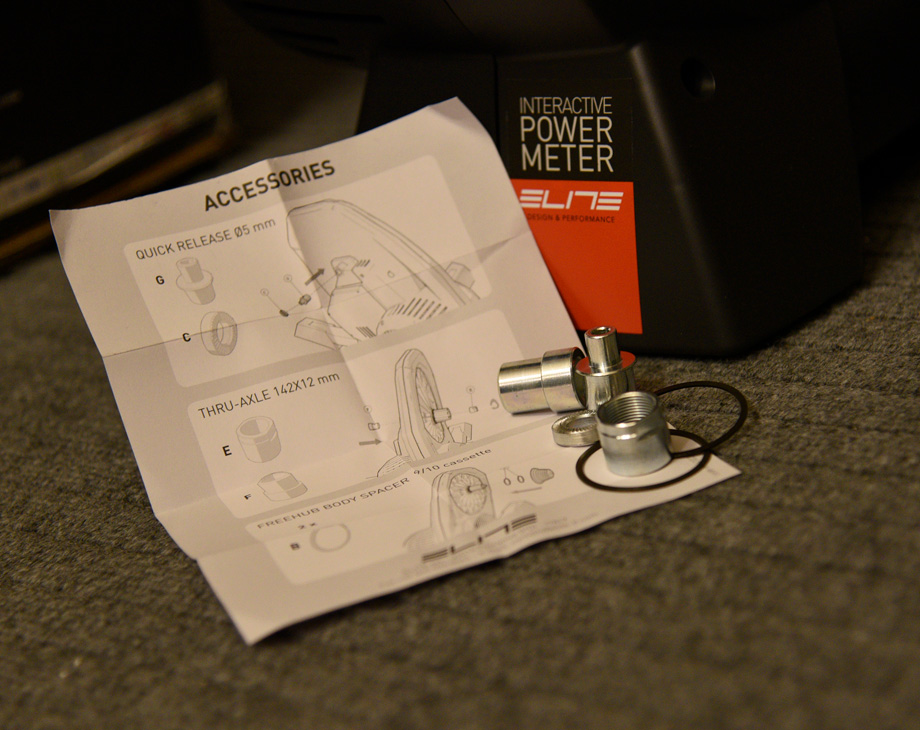 Then you’ll add the cassette… The feature that makes this a “direct drive” trainer, as no back wheel is needed. 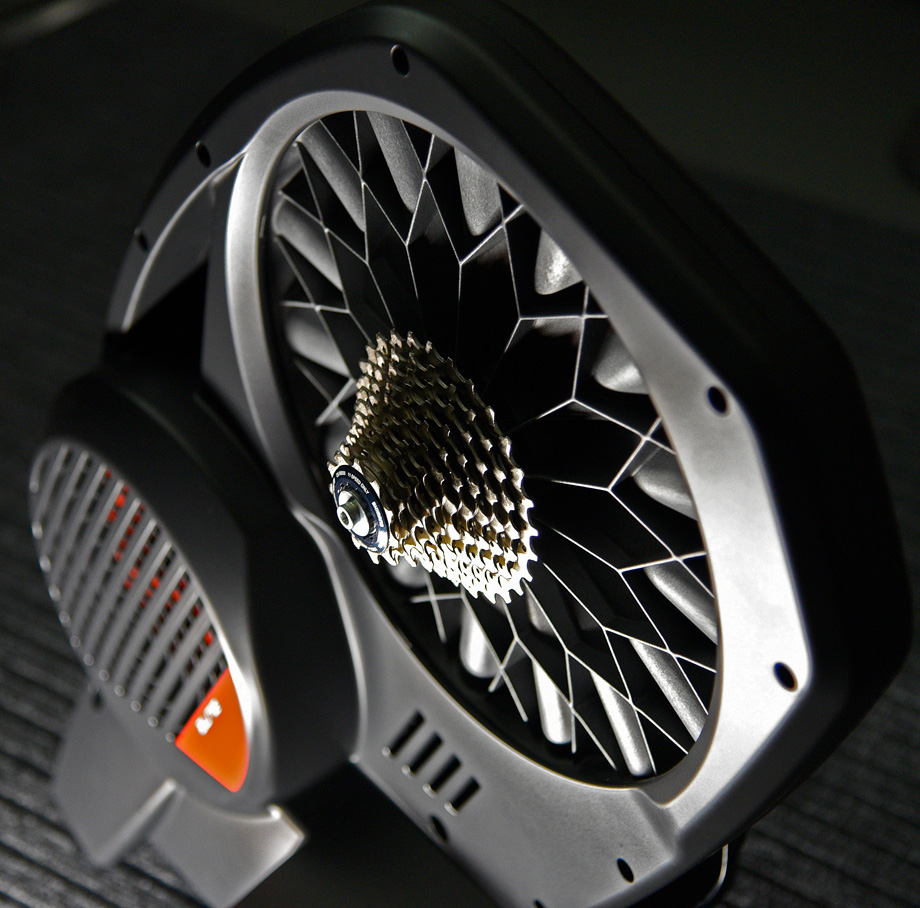 You simply put the bike on the trainer in the same fashion you would put a back wheel into the bike, fasten whichever QR standard you have… 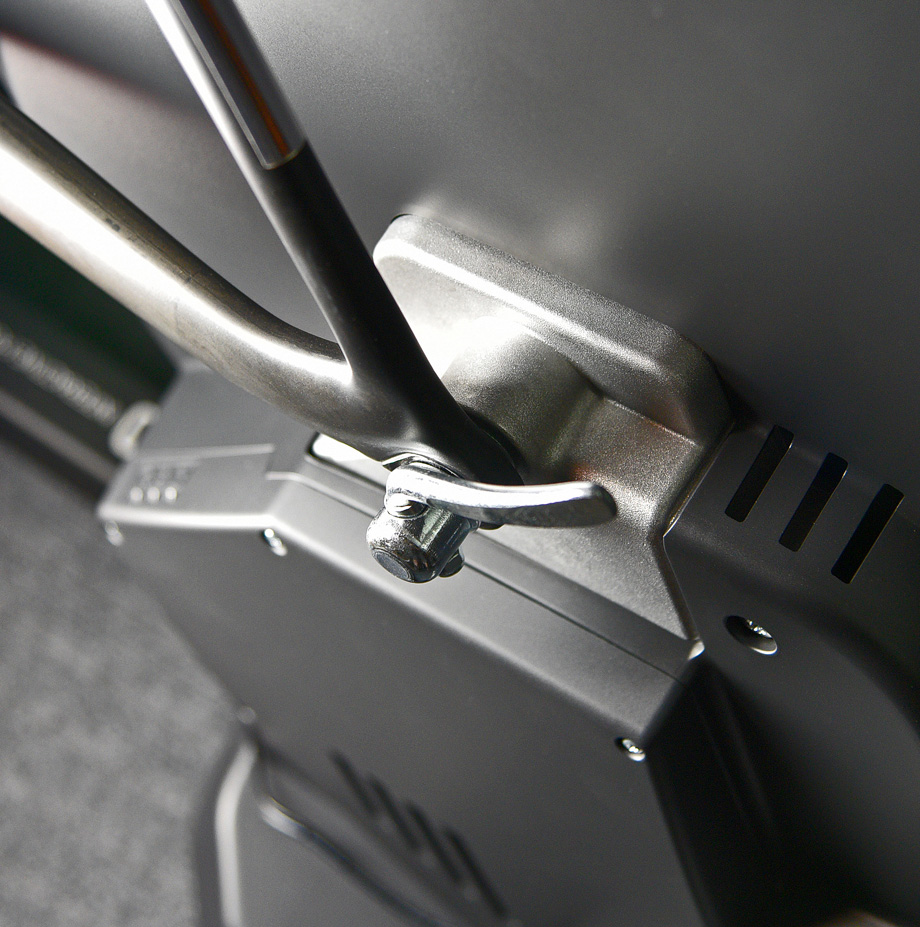 Ah, ahead of that you’ll also need to attach the power supply, which simply plugs into the back with a bit of cord routing. 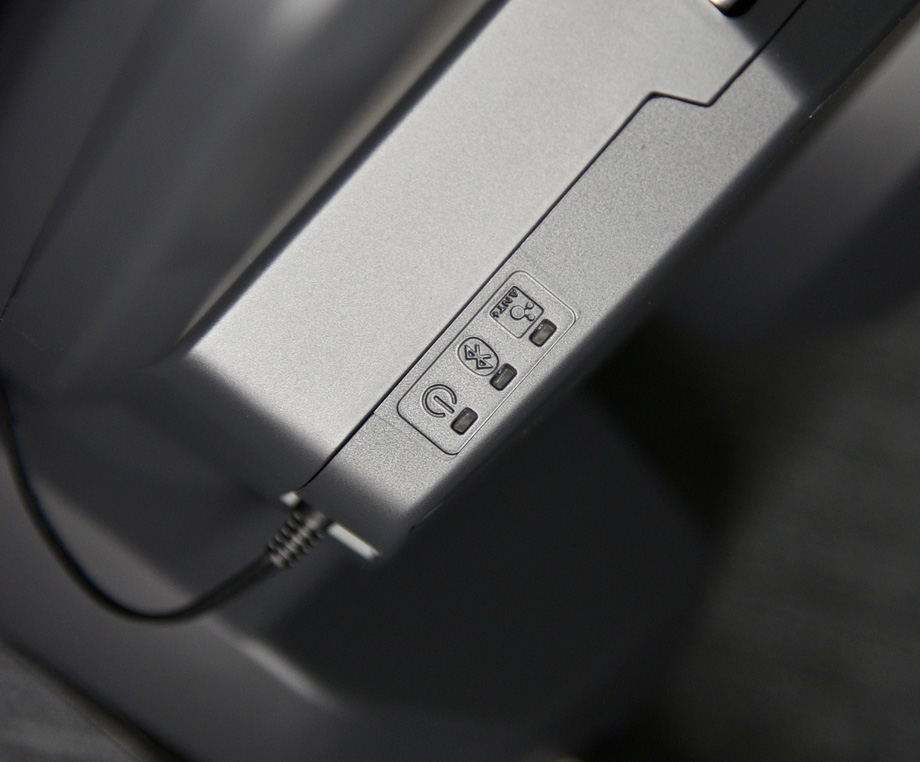 Just above the cord at the back are lighted indicators for the multiple transmission standards.

Hooked Up
The Direto uses Ant+ and Bluetooth 4.0 as well as both Ant’s FE-C and is one of the first trainers I’ve seen that also uses Bluetooth’s Smart Trainer specific protocol. 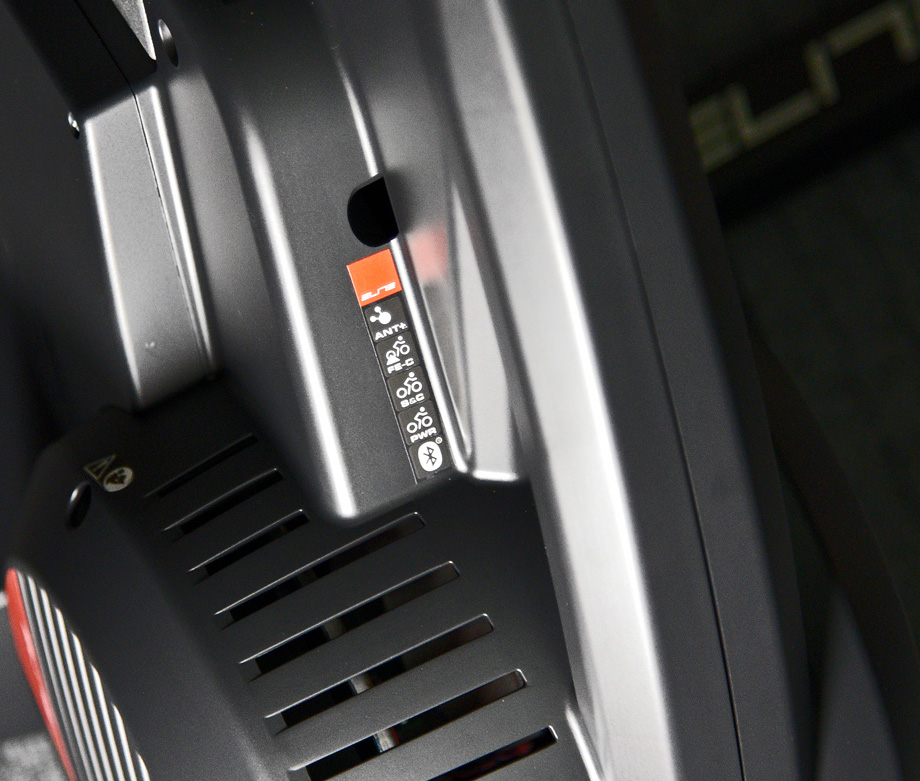 That means the Direto will be happy to talk two nearly anything you would want to use to control a trainer and traIning program… Garmin (and Garmin wearable), Polar, Android devices, Windows devices and PC’s and darn near anything from Apple will connect to the Direto.

Going to work
Once you’re up and running, You’ll appreciate a reasonably large flywheel that tips the scales at @9.25 Pounds. 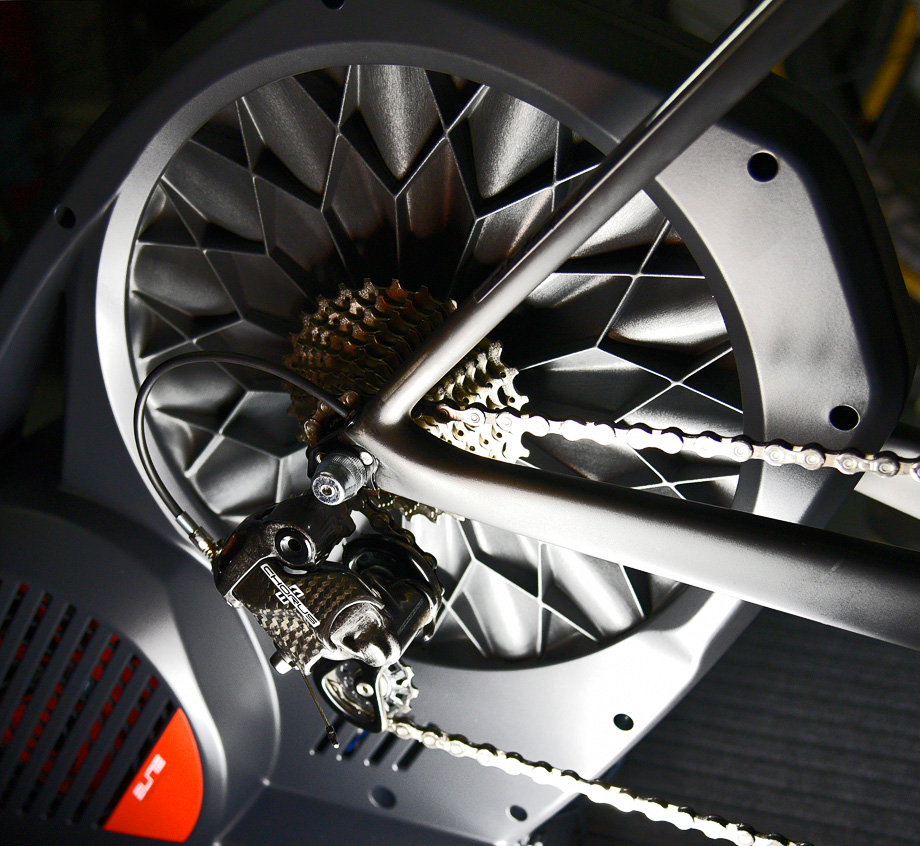 Now before you think “aha, the flywheel is where they cut corners as other top end trainers have 12+ pound flywheels”, you have to understand that “Road feel” isn’t always about a heavy flywheel. Road feel is also about the sophistication of the resistance tech that controls the spin of that big flywheel. 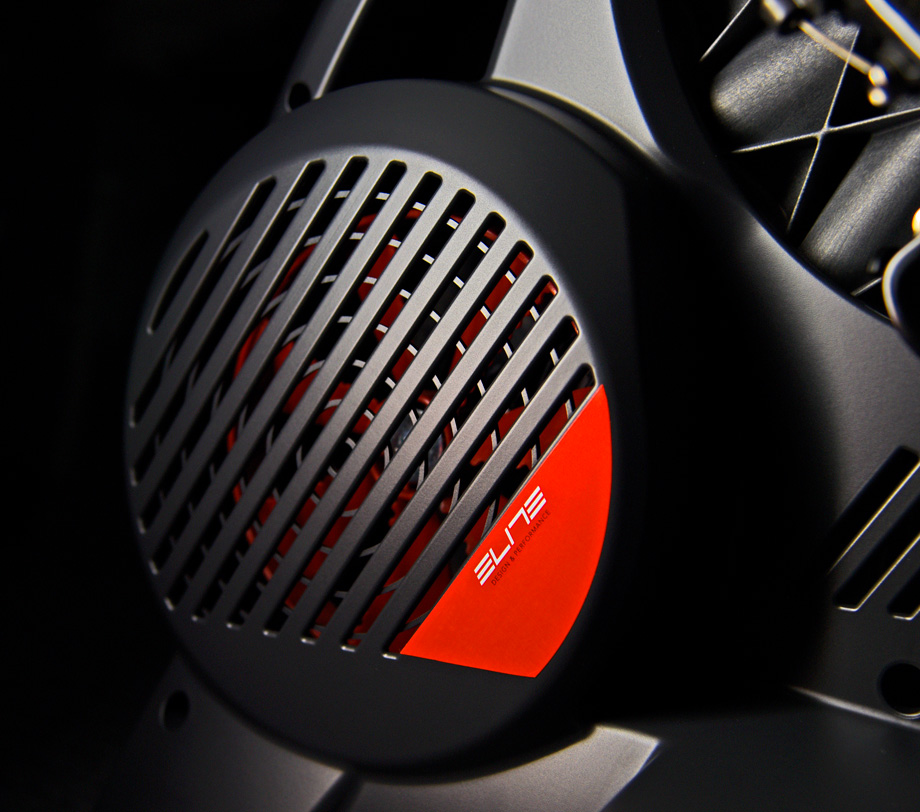 Inside the fan cooled housing sits an electronic braking (resistance) unit as well as an Optical Torque Sensor (a functional power meter).

The Torque sensor tracks with enough frequency (more on accuracy later) that the braking unit has a constant flow of information that allows it to adjust resistance properly.

When I say “properly”, I mean that the Direto doesn’t instantly change the resistance when your program indicates sudden change (either from a programed course elevation or from your own manual input if you’re operating in Erg mode).

That means that the Direto doesn’t slam on the resistance instantly and instead gives you a couple of seconds of more gradual change. This is a good thing as some other trainers seem to think “instant” response is a good thing when it really is not…

When running intervals with the Direto and cross ref’ing that with Verve’s Infocrank and Garmin’s Vector pedals, the Direto was generally @1-1.5%.

Looking at the tracks and running this for intervals into the 12-1400 watt max range, the Direto was extremely close… As close as it’s more expensive Elite Counterpart the Drivo and also right in line with Wahoo’s Kickr.

I think the Direto’s accuracy is this is better than claimed. Maybe my half…
It’s also consistent… The calibration only takes a few seconds, but after initial calibration, I simply forgot to do the spin down again for a few days and it never tracked any less accurately (Verve’s Infocranks are also incredibly easy to calibrate and they were calibrated for every ride).

A bit less accurate was the integrated cadence “estimator” that’s a part of Direto’s package. On spin downs and under big load / wattage changes, the cadence indicator could simply go a little wonky…. That said, once you fell into any sort of rhythm, it very quickly came back on track. It’s in these steady state instances that you would care about your cadence in any case, so it’s a minor flaw, but worth noting. 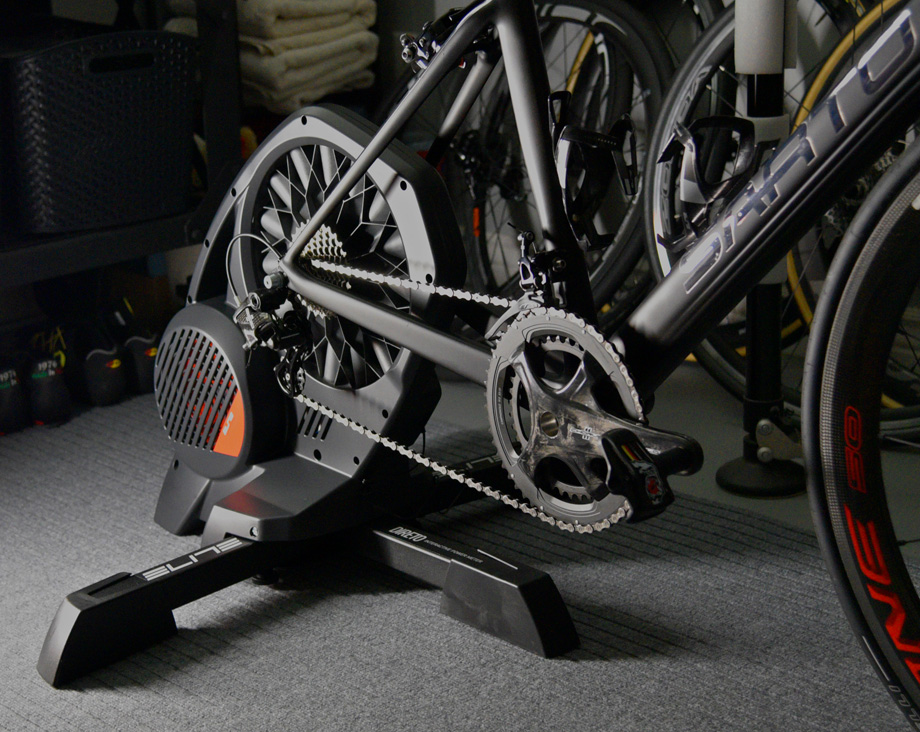 The footprint here with the legs spread out is pretty wide. The legs can be locked into place by twisting a screw… under each leg. 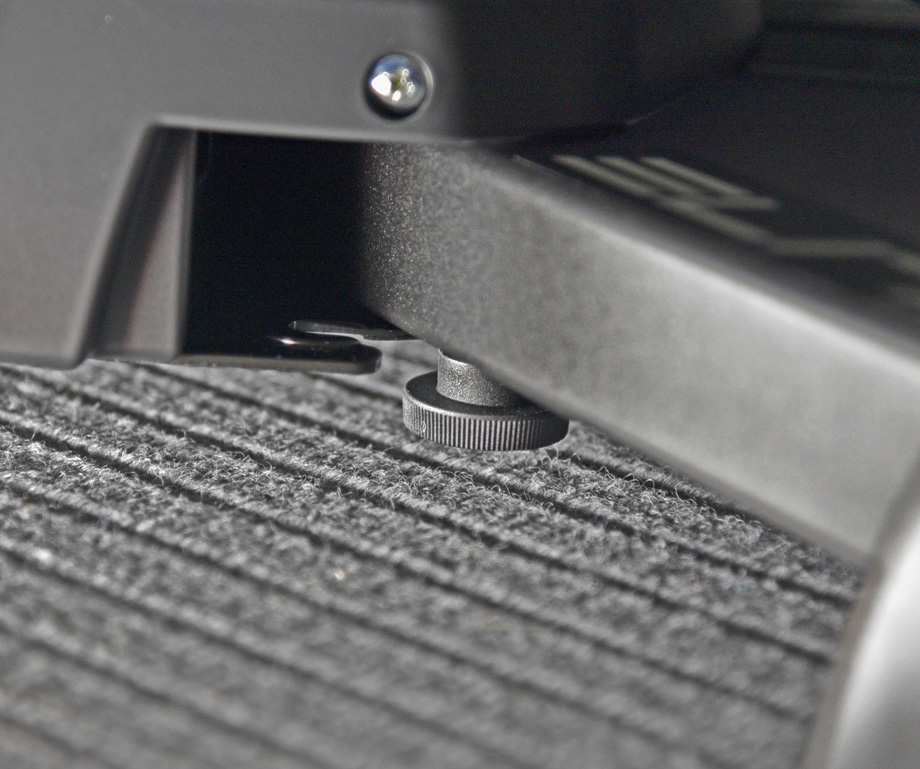 I will say that this is a shortcut versus spring loaded locks on more expensive units like the KickR.

Once you’re finished with the workout though, the footprint is very compact. 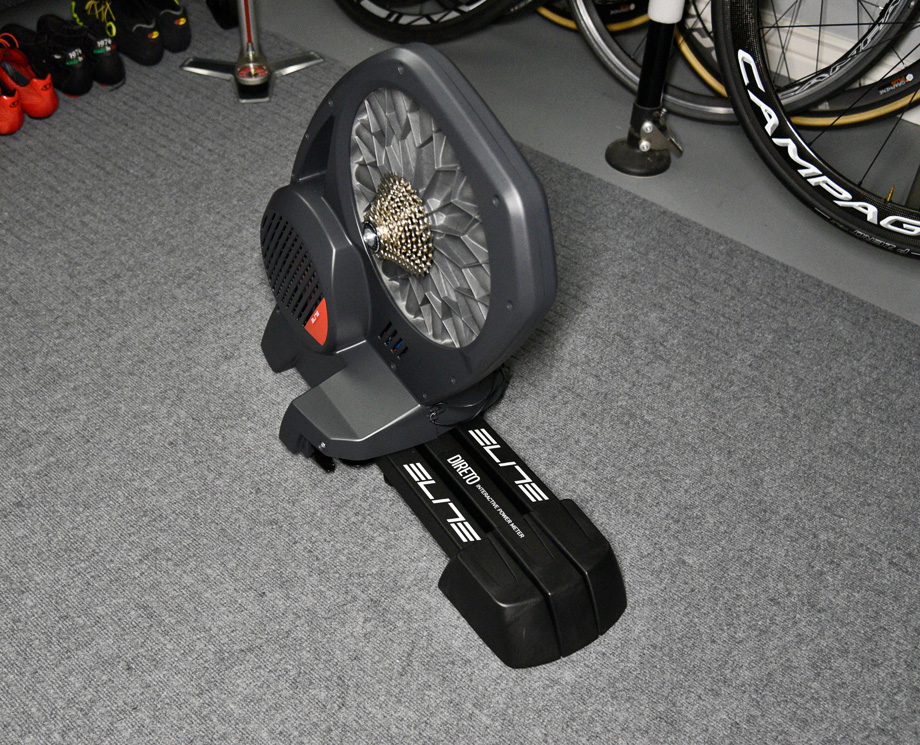 There’s also a handle for carrying that’s integrated into the back of the unit. 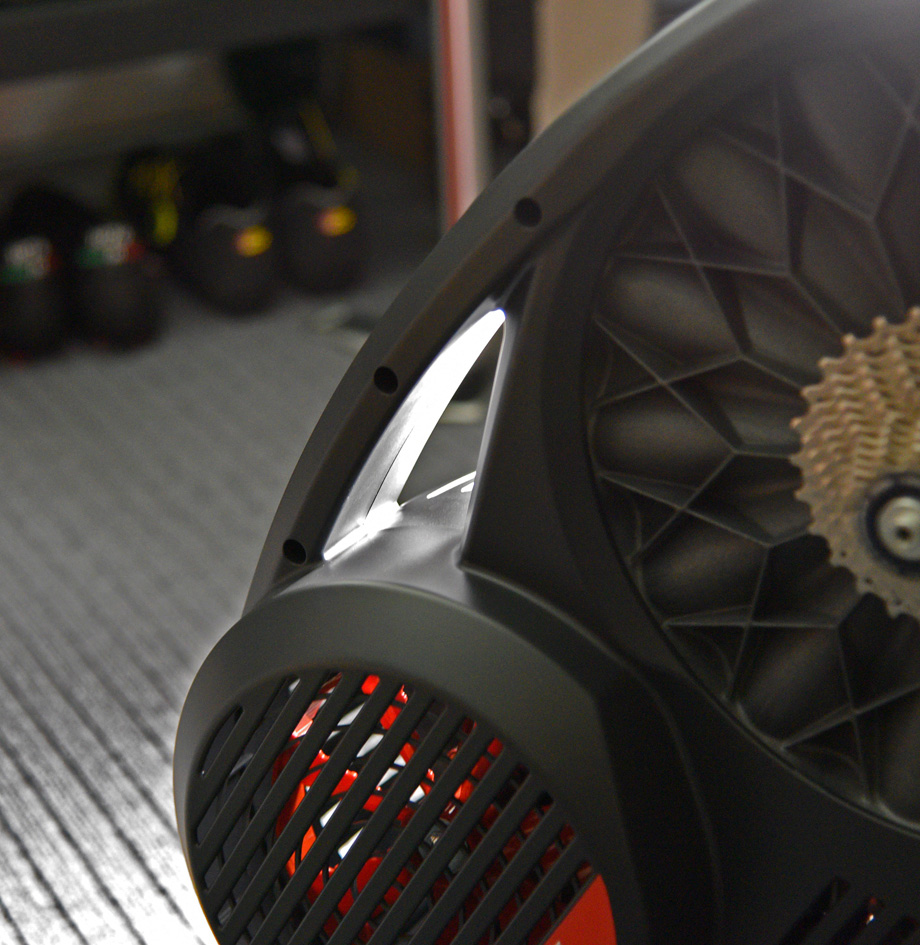 And the unit itself weighs in at 33 pounds which is lighter (by 10ish pounds) than a few other trainers with heavier flywheels and also heavier frames, and the latter (heavier frames) don’t add stability versus the Direto.

At a glance, I thought for sure that noise would be one area that the Direto would suffer.

Yet the noise here in decibels was nearly a tie with Wahoo’s Kicker (Both units got a 10 minute warm up and were running at 300 watts / 25 MPH as tested with Iphone’s simple meter at exactly the same distance).

I couldn’t tell which was “louder” BUT there was a difference.

The tone of the Direto is damn near the exact same as the fans I use but the Kicker was more of a whine. That means that when I’m running fans, I pretty much can’t hear the Direto (I just barely hear the Kickr).

Maybe that’s down to the “biomimicry” of the shape of the internal fan of the Direto?? 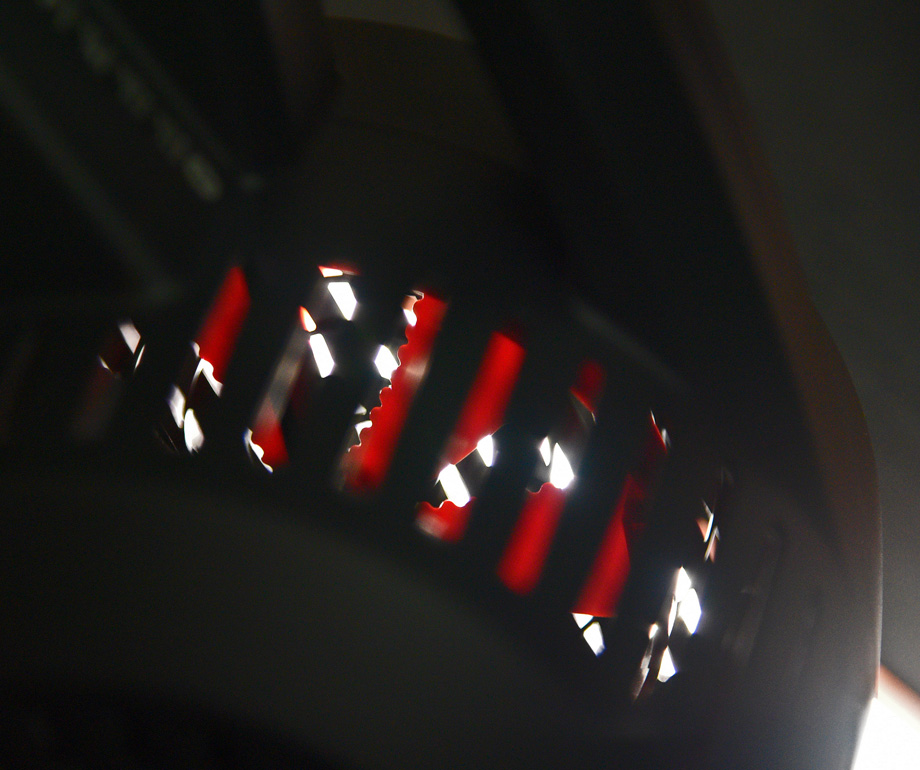 Whatever the cause, neither could be described as loud, in fact they’re both relatively quiet (LOTS more quiet than nearly all older trainers I have). I can watch movies / TV / anything else without these trainers bothering me…

So when it comes to programming, Elite also have their own, house-branded training packages. Frankly, I am manual adjustment fan for the hard work and Elite have a very easy to use screen for handling the basics and programming intervals.

Elite also toss some great tech at you with their “My E Training” software package. 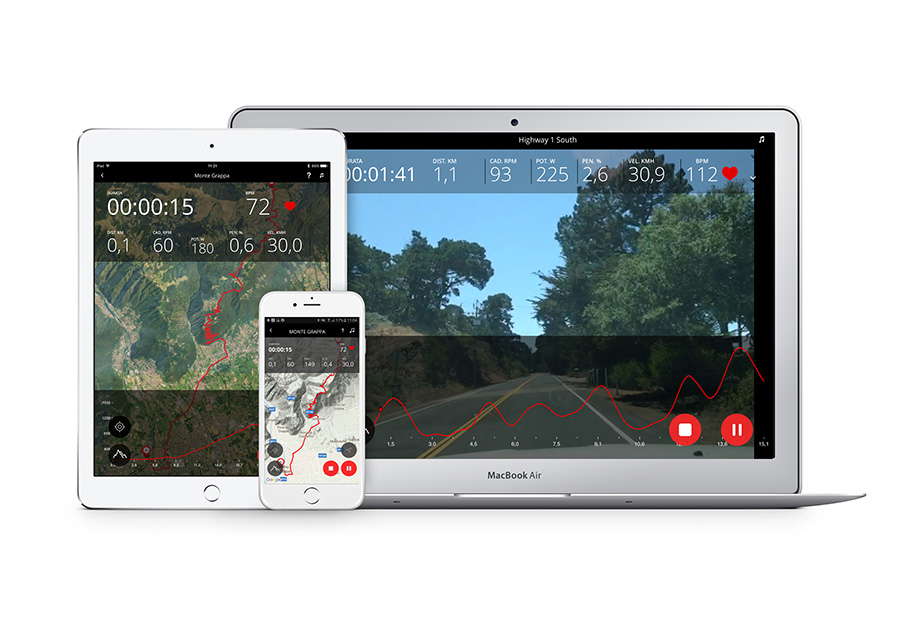 This allows you not only to Map courses all over the world with Google Maps (inclusive of elevation changes, but it leaves out traffic and stop signs) but gives you a host of training info on the screen so it’s not all fluff and eye candy.

This also adds “My RealVideo” featuring hundreds of course all over the world. As entertainment goes, simulcasting this from a PC to a big screen is FANTASTIC.

Bottom Lines
Elite’s Direto isn’t a game changer due to its host of features but it does change a few things for a lot of people when it comes to this kind of feature set and accuracy at this price. This would have been an absolute class leader just a couple of years ago.

Elite’s Drivo and Wahoo’s Kickr are still at the top of the food chain on function and feature set, but the Direto is very close… Closer than the price gap would indicate.

Here’s to trickle-down tech and competition in the market place!

Direto’s are widely available now and are on sale through a few spots for the Holidays…
You can find more at: Elite-it.com
• Check prices at AMAZON.com here