When was the last time you suffered the agony of getting dropped and watching all your training buddies ride away into the sunset while you were on your stationary trainer? The ErgVideo concept of honest-to-goodness indoor RACING has expanded to be better than ever over the past couple of years, and we hop on board as ErgVideo 3.0 software, along with new High-Definition videos are released.

Ode to Indoor Cycling
Out of both necessity and personality, I’ve always been a big fan of indoor workouts. For specific intervals and workouts, nothing beats the level of control possible with indoor rides, where there is no traffic or changes in terrain to interrupt your training goals. This is especially true when you add the ability to regulate and record power output levels, as is the case with the CompuTrainer indoor trainer system or when riding a trainer with a power monitor on your bike.

However, one thing that has been missing from indoor workouts is the ability to really ride in a group or racing situation. You can plan as many different interval workouts as you want, but it is very difficult to replicate the highly variable nature of group ride dynamics and power demands. Similarly, when using CompuTrainer’s 3D computer system to ride a multitude of courses, you ultimately can still dictate the pace that you ride at. A racing situation can be enhanced somewhat when racing against a pacer or another rider on the CompuTrainer, but it remains tough to truly incorporate an interactive ride situation. 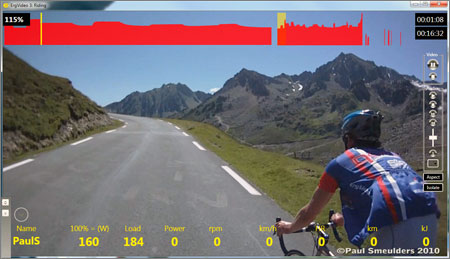 Enter the folks at ErgVideo, who we first reviewed in the spring of 2007. The concept itself is a no-brainer – rather than letting the rider “control” the ride, what they have done is come up with a solution to indoor racing by taking advantage of CompuTrainer’s ability to rapidly adjust resistance. In essence, just like in real racing, ErgVideo “slaves” your CompuTrainer to its race, taking away your ability to control your workload and telling you when you need to rest and hammer instead.

ErgVideo 3.0
Training indoors can be very time-efficient because of the lack of “junk” miles getting out to your favourite ride, not to mention cleaning your bike after every ride in the muck and grime of winter! However, time is still precious when training indoors, as time spent setting up the bike is often time spent talking ourselves out of riding on the trainer. One highlight of the ErgVideo 3.0 software is that it is now completely stand-alone in being able to operate both ErgVideo and your CompuTrainer. Bypassing having to open up and run either the RacerMate CompCS or Multirider software is definitely a time-saver, and also means that more computer resources can be devoted to ErgVideo.

Besides direct control of the CompuTrainer, some of the other highlights new to ErgVideo 3.0 include: 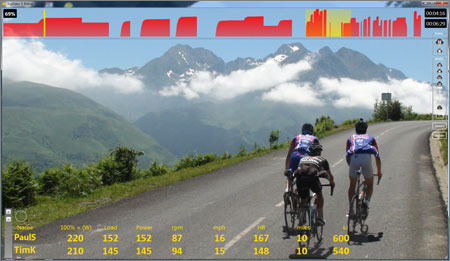 Besides eye-popping HD, the ErgVideo 3.0 screen has been given a whole new refresh to a more modern look.

• High Def! ErgVideo has joined the world-wide movement towards presenting pretty much every sporting event in high-definition. Beyond their existing collection of 54 standard-definition ErgVideos, the six newest ones and all future ErgVideos will be in HD. Note that you do NOT require a HD TV or special computer monitor, as the basic requirements is 1024×768 resolution on your monitor. 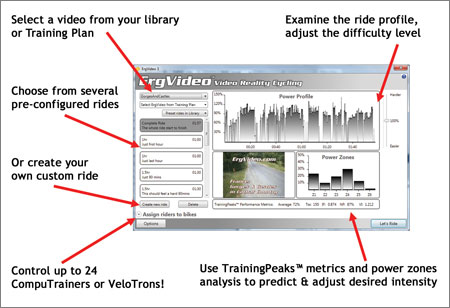 The main control screen of ErgVideo 3.0 has also been given a big re-design. All the information is now on a single screen, making things much easier to use and more intuitive. You can view existing rides you’ve designed for each video, customize new rides, and see the profile and intensity of the ride all beginning from the same screen.

• Another advantage of having standalone software control is that ErgVideo is no longer bound to any restrictions imposed by RacerMate software. One example is that ErgVideo 3.0 now permits control of up to 24 CompuTrainers or VeloTrons simultaneously, rather than the typical 8 with the default RacerMate MultiRider software. This greatly expands the capabilities for group training and indoor riding studios.

• Another example is that the handlebar controller can now do things that previously it could not, such as re-calibrating your CompuTrainer at any time during the ride. This may seem a minor thing, but it’s actually been one of my biggest annoyances with both RacerMate and ErgVideo 2.0 software. Namely, you have to “waste” 5+ min of your training time warming up the tire and rollers before calibrating, and only then do you proceed to your actual ErgVideo ride. With 3.0, you can start your ride right away with an easy warmup, calibrate, and then immediately get to the “meat” of your workout or ride. You can also pause your ride at any time, which was not possible previously.

• Training Metrics One beauty of indoor training is the controlled environment, making it perfect for doing structured intervals and other workouts. Using the RacerMate software, it’s possible to obtain full power profiles for your workouts. However, one beauty of ErgVideo is its integration with TrainingPeaks power metrics, such as energy expenditure (kJ), training stress score (TSS), etc. These data are instantly calculated for each ride that you design, so that you can get accurate information on exactly what each workout will be like. 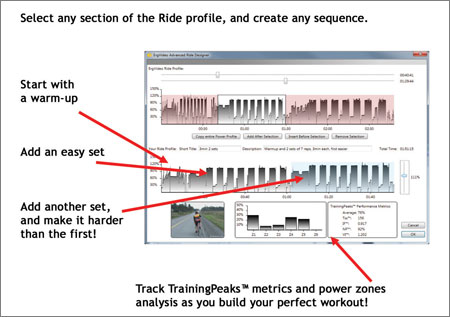 • Simpler yet more powerful ride designer. The ErgVideo 3.0 software is really completely new in most details compared to 2.0. Even the ride designer is much easier and more intuitive to use. Rather than having a separate page for ride design, everything is integrated into the main page when you open up a training video. Overall, designing a ride is now much easier, with sliding controls to increase or decrease the ride difficulty, and simpler setup of different rides. You can even design a repeat of the same interval segment, but have different intensities for each interval set. Again, every ride you design automatically comes pre-calculated with all the TrainingPeaks power metrics, so you know exactly what you’re getting yourself into.

• After your ride, you are also provided with full power metrics information, which can then be exported. This provides even more structure to indoor training, and helps you make better use of your CompuTrainer as a real training system rather than simply an indoor trainer.

Back Compatibility
One of the issues often confounding and irritating folks concerning software upgrades is the compatibility between existing software and data with new software. This back-compatibility can often be a major hesitation in the willingness of users to upgrade at all. ErgVideo 3.0 takes this well into account by being able to work with either the new HD videos or the “classic” standard definition videos. Therefore, there is no need to run 2.0 for one set of videos and 3.0 for another, again making life easier.

All new ErgVideo purchases from September 2010 onwards comes only with ErgVideo 3.0 software, and 2.0 will no longer be available. It is also important to note that 2.0 does NOT need to be deleted to accommodate 3.0. So you still have the option of using 2.0 with existing SD videos. However, ErgVideo HD will only work with 3.0 software.

The 3.0 software and HD videos makes a greater demand from your computer’s graphics and memory resources. For example, my trusty 2003 era laptop (Windows XP Professional OS) that has seen me through the writing of two books and 30+ scientific articles (not to mention >100 Pez articles including this one!) is seriously incapacitated in the face of ErgVideo 3.0 basic requirements. I commandeered my sons’ 2010 laptop with Windows 7 Home Premium OS and ran ErgVideo 3.0 with no problems. So if you have a halfway new or recent computer, things should work fine no problems, but you might want to check your system’s capabilities if it’s an older setup.

The same applies to the vintage of your CompuTrainer. I have systems that are of 2000 and 2006 vintage, and the “Prolific” brand serial port to USB adapter that came with them did NOT work with ErgVideo 3.0 in standalone mode. Switching to a newer “FTDI” based adapter is required with ErgVideo 3.0.

[NOTE to Mac Users: ErgVideo software has been designed for PC, with no Mac OS version available. ErgVideo does report that a number of customers are running the software on Mac using Boot Camp, but ErgVideo does not yet offer any support for Mac OS.]

The HD Look
The new HD videos definitely are an upgrade in the looks department, making the videos much sharper and seeming to “pop” out of the screen. This is especially pleasing with the mountain scenery of the first three HD videos, including the classic climbs of the col d’Aubisque, the Hautacam, and the Tourmalet. In addition, three base training and tempo HD videos have been rolled out, including “Base-Tempo White Lakes,” “Threshold Intervals,” and “Tempo Pyrenees Foothills.” 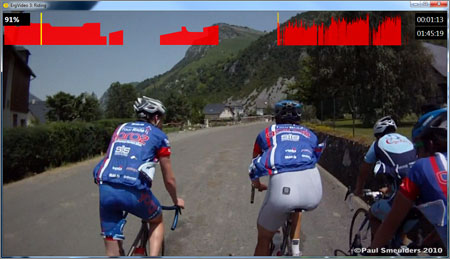 The display can be customized to have more or less data on the screen to suit your preferences.

The HD videos also look nice on the screen with its incorporation of ride data. Rather than the old look of having “solid” blocks of data above and below the screen that reduces the actual picture size, the ride data is now transparently overlaid on top of the picture like a heads-up display, giving it a nice high tech appearance.

Pricing
Besides the new re-design, the best thing about ErgVideo is that, with a free upgrade for existing ErgVideo customers, the price is definitely right! It is definitely worth it to upgrade even if you’re completely happy with ErgVideo 2.0. That’s because it is not just a little cosmetic touchup of an upgrade (although the logo is new!), but a full rethink and redesign of the entire ErgVideo operating system and user experience.

Therefore, not only is the price right, but its compatibility with existing videos make it a no-brainer in terms of whether to upgrade or not. With an adequately powered computer and the proper serial-USB adapter, ErgVideo 3.0’s setting up and recognizing both existing and new CompuTrainers is simple with the built-in “one-touch” com-port detection tool.

The HD videos are priced at US$59 each, while the standard definition videos are US$45. The pricing has crept up from the origins of ErgVideo, but then so has the value in terms of the development of ErgVideo 3.0 software and the better user interface, ease-of-use, etc.

Summary
If you own a CompuTrainer, then it’s likely because you are pretty serious about your indoor training. The ErgVideo is a simple yet powerful complement to the system. Not only does it maximize indoor training capabilities, it does the seemingly impossible by increasing the fun factor at the same time.