The first day at Eurobike is done and dusted in Germany and before he could even pick up a famous German beer and relax, our man in Friedrichshafen filed this report with some of the coolest new gear at the show on display from Cipollini, American Classic, LOOK and Konstructive.

Eurobike is the biggest bike show in the world and with its seemingly endless displays, 2,000 plus journalists, 50,000 trade visitors plus the thousands of exhibitors it’s sometimes hard to know where to look or where to start. With no press conferences or appointments planned for the first hour, I just let my bike lover’s nose guide me where it would.

Two stands in I quickly found something to stop for in the form of the custom German bike brand, Konstructive who had a couple of their latest creations on display. 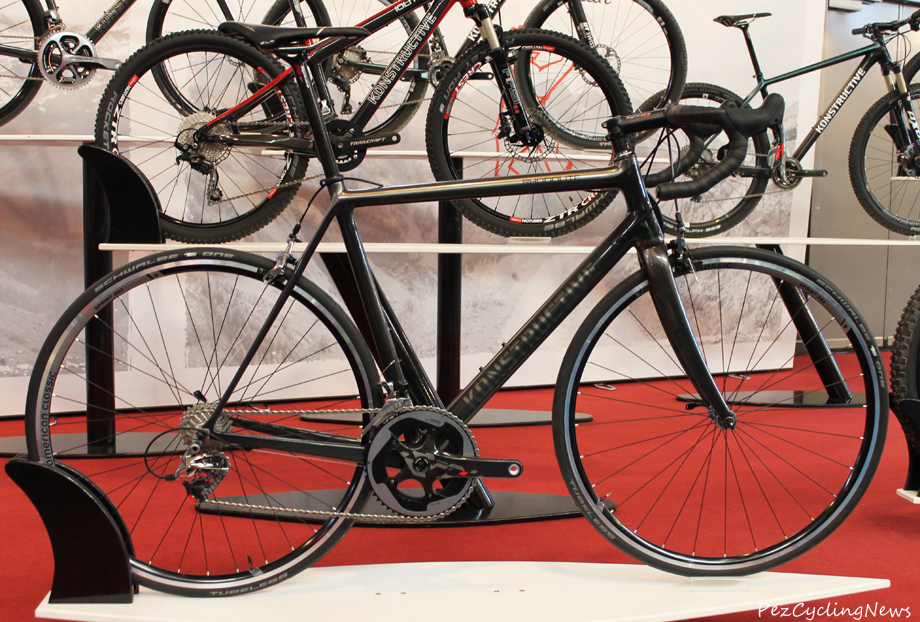 These machines are a high end product made out of the best possible materials and are finished off beautifully. 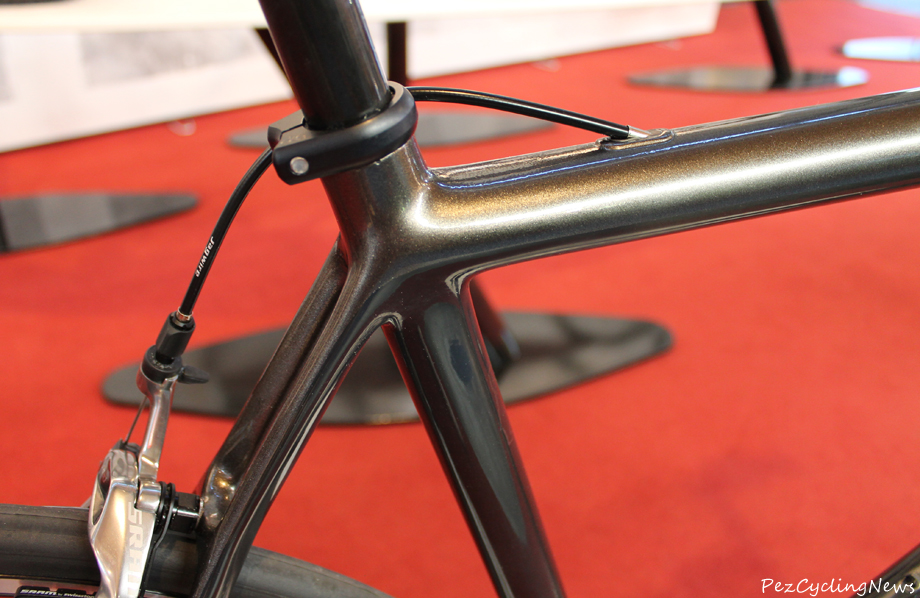 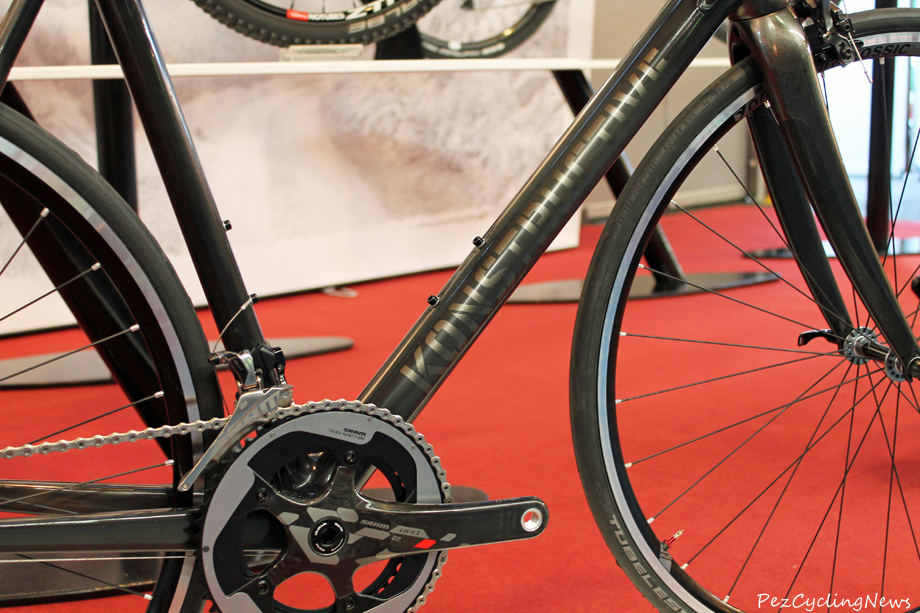 They had a couple of their brand new Rhodolite roadies on display which are custom carbon fiber European made bikes with a frame weight of just 800gr for a disc brake frame. It can also be used as a rim brake machine like the grey one here or with discs like the two toned grey below. 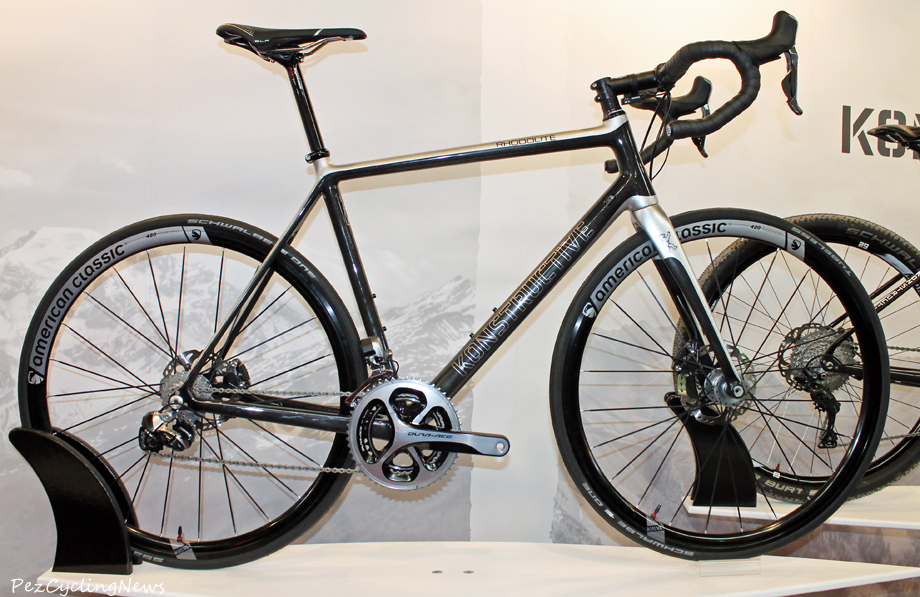 This Dura Ace disc equipped Rhodolite was my personal favorite and weighed in at just 6.5kg

The Rhodolite is not just about light weight and looking good though with the frame designed for optimal power transfer without sacrificing the ride quality. They’ve done this through specially designed cross-sections of the seat and down tubes and the reported ride is comfortable but highly responsive. Available in your standard frame sizes these bikes can also be custom built to your exact specifications. For such a high end finish and quality frame Konstructive bikes start at a surprisingly low 3000 euros but the ones pictured here with Dura Ace Discs or SRAM Red go for much higher.

Besides the obvious quality workmanship and finish on the Konstructive bikes there was also something else that was super obvious – their love of tubeless wheels. Both of the Rhodolite roadies and a cross bike on display sport American Classic tubeless wheels and the guys at Konstructive are big believers in the technology. 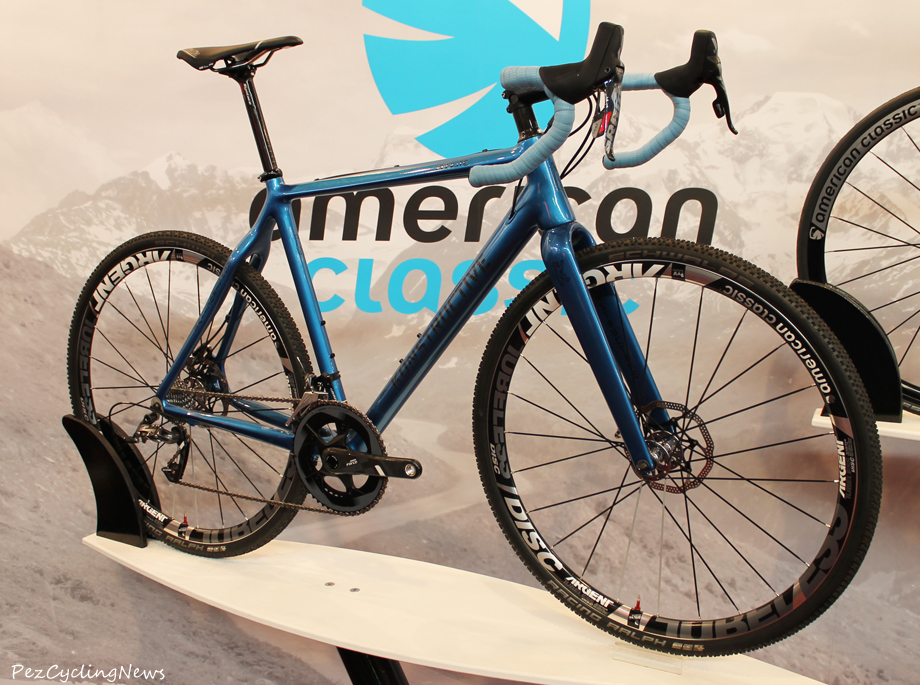 The disc mounted Rhodolite in particular got my eye with the brand new American Classic 420’s. With new graphics and what looked like a new hub & rims to go with them it it was time to say ‘auf wiedersehen’ to the German Konstructive guys and track down American Classic founder Bill Shook to get the latest on his new wheels. 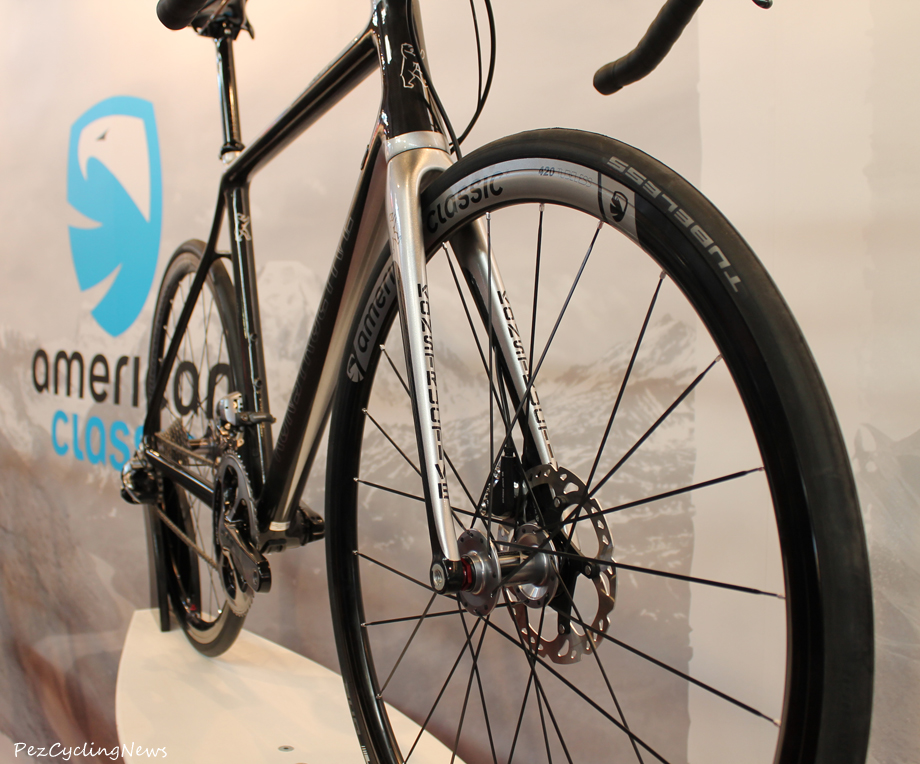 Not too far away from Konstructive and without getting too distracted on the way I managed to make my way to American Classic’s booth. On hand was CEO Bill Shook who answered my first question about the 420’s – what’s new? 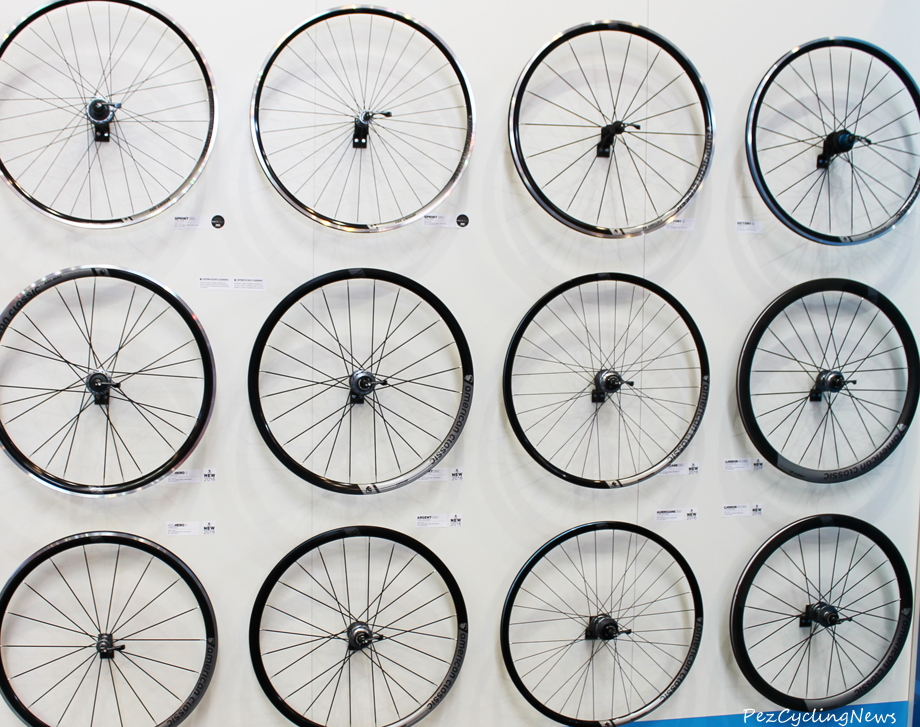 Some of the 2016 range of American Classic wheels. The key words this year are wide, light and discs.

Bill told me: “The 420 has been completely redesigned. It’s still 34mm deep but we’ve modernized the design with the rim now 22mm wide and it’s now tubeless compatible. It’s lighter too with the rim weighing just 420gr and the pair weighing 1521gr.”

Good news for us consumers, AMClassic have made their updates to the 420’s and managed to keep the price exactly the same at $999 for the pair for the rim brake version. This is one cool set of wheels for under $1000 but being brand new they haven’t hit the stores yet. Keep an eye out for them soon at your local American Classic dealer or if in you’re in the US you will be able to get them direct in their online store. 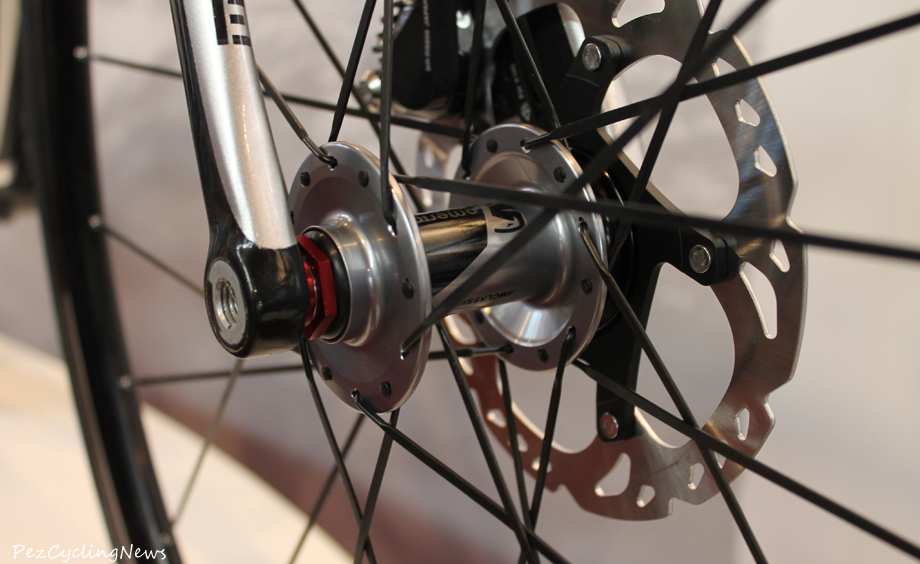 In the hour or so that I’d been at the show already I had noticed a threefold increase on disc brake bikes from last year’s show and Bill had that covered too with almost all his wheels now being available in a disc version. 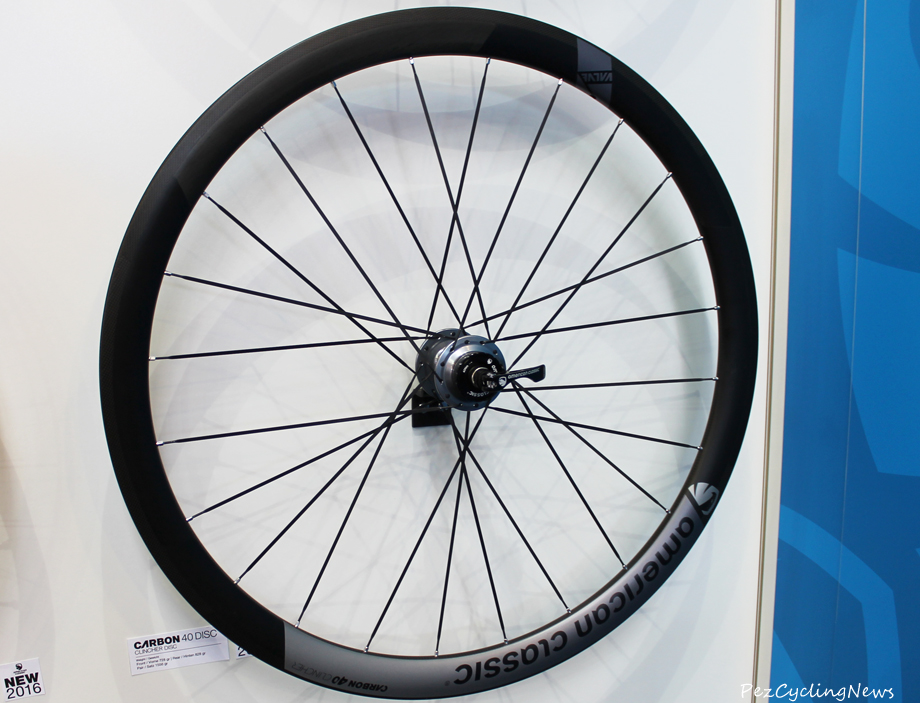 This list of now disc brake available wheels included a pair of wheels that I recently tested, the Carbon 40 clinchers. These disc braked versions weigh in at 1556gr the pair and looked great with their new understated graphics.

Understated was not the word to be using for my next visit though as I came across the none too subtle stand of Cipollini Bikes. 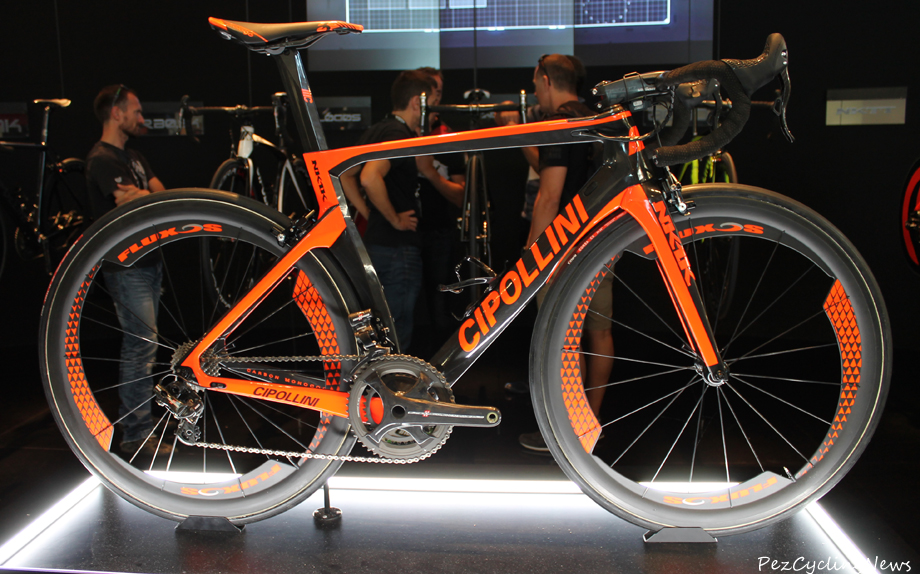 I was there for the worldwide launch of their new model, the NK1K. It’s a monocoque frame designed for maximum possible performance in terms of speed and power transfer. The NK1K is available in either disc brake or direct mount rim brake versions and with an extremely flashy paint job it was drawing big crowds and is sure to be another winner for Cipo after the success of earlier models like the Bond, RB1K and Logos which are all still available in new 2016 livery.

For the moment though, the show on the big screen was all about the NK1K and the orange and black version down the front was getting all the looks with its outrageous wheels setting off the frame’s aggressive styling nicely. 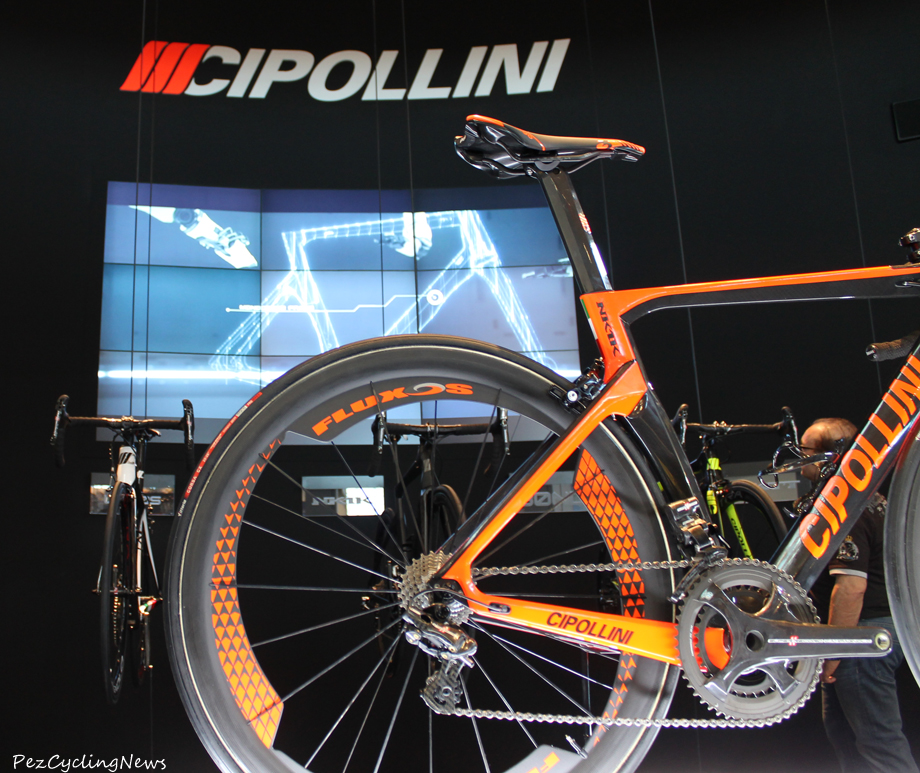 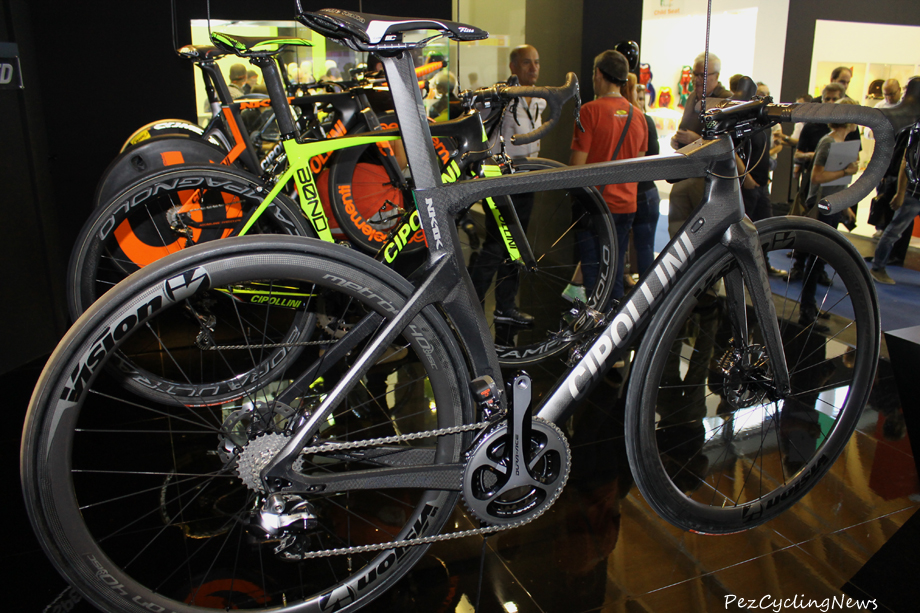 The brief moment of subtlety was quickly over though as I moved on for a quick look at the new NKTT Time Trial rig. 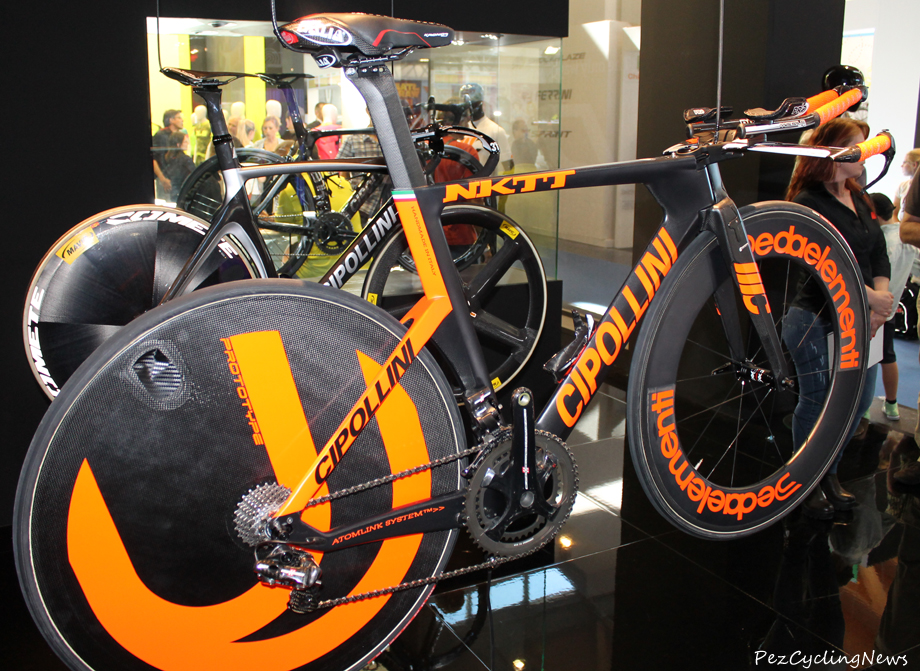 It was back to the flashy orange color and against the clear coated carbon it showed off the rig’s aero lines and hidden brakes perfectly. 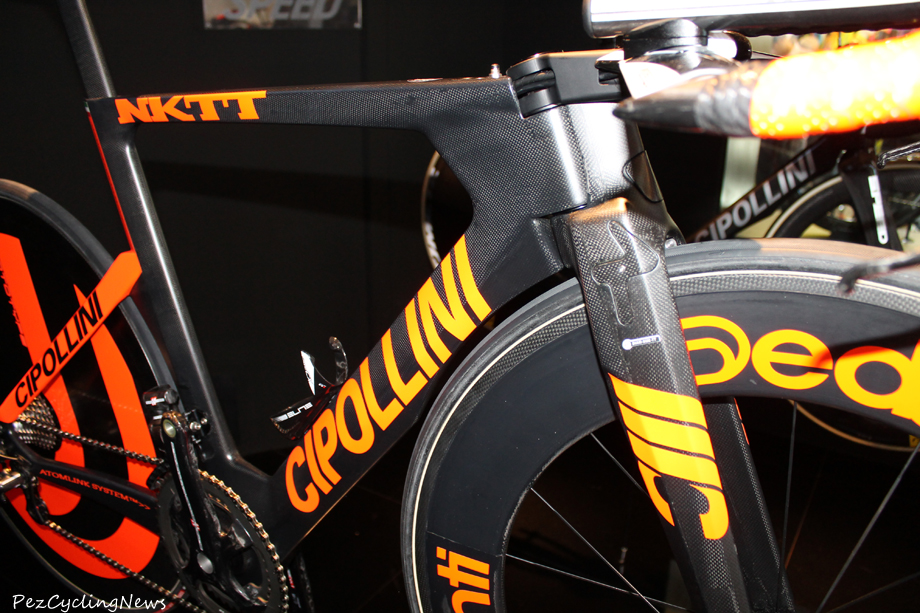 Still on TT rigs and retired pros I headed upstairs to catch another worldwide launch – the LOOK 796 – where Laurent Jalabert was on hand to give his thoughts on the latest aero masterpiece from LOOK. 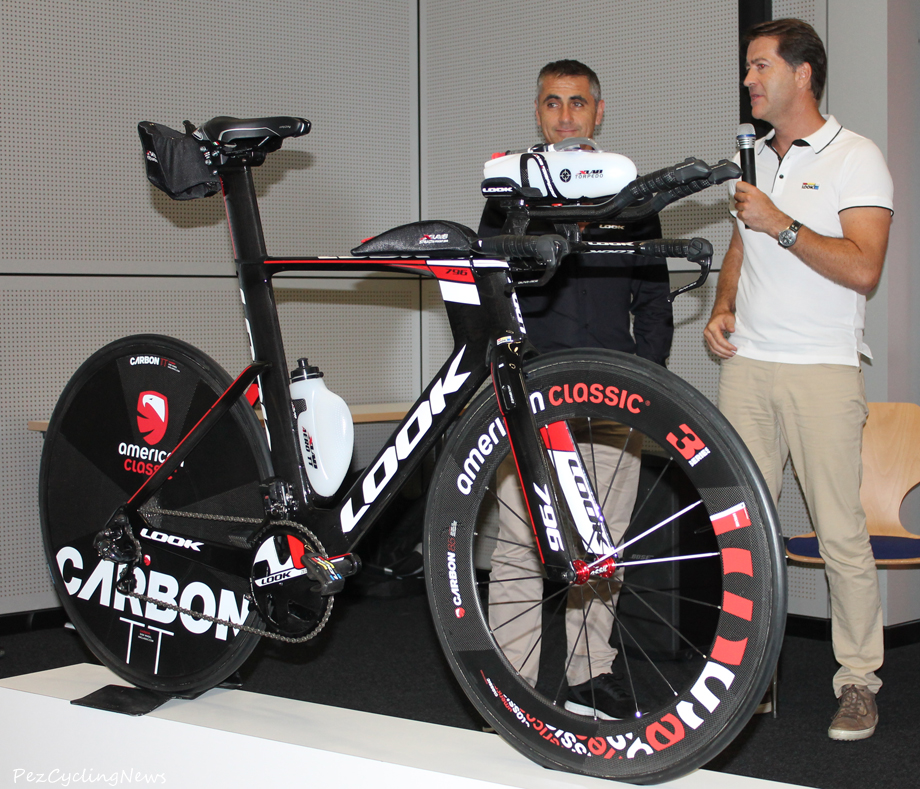 Laurent Jalabert discussing his upcoming triathlon plans with the 796. Wind tunnel testing proved that the new bike is more than 2 minutes faster than the already fast 596 over a 180km Ironman course.

Over three years in the making this is one bike that hits it out of the park in terms of design and ingenuity with every single part of the bike designed to make it the fastest TT rig ever. 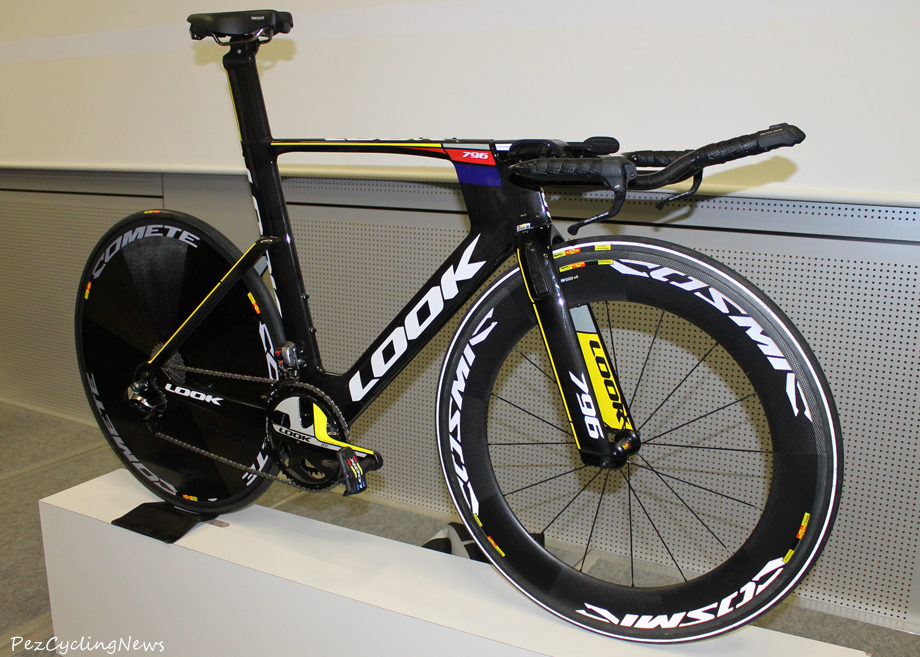 One of the main features of the 796 are its adjustable parts to provide the user with the best, most aerodynamic position possible. These adjustable components include their new one piece ZED3 crankset, the AEROPOST seatpost, AERO FLAT STEM, AEROFLAT reversible handlebar and MONOBLADE fork with integrated brakes – and that’s just for getting started with the engineering marvels here. 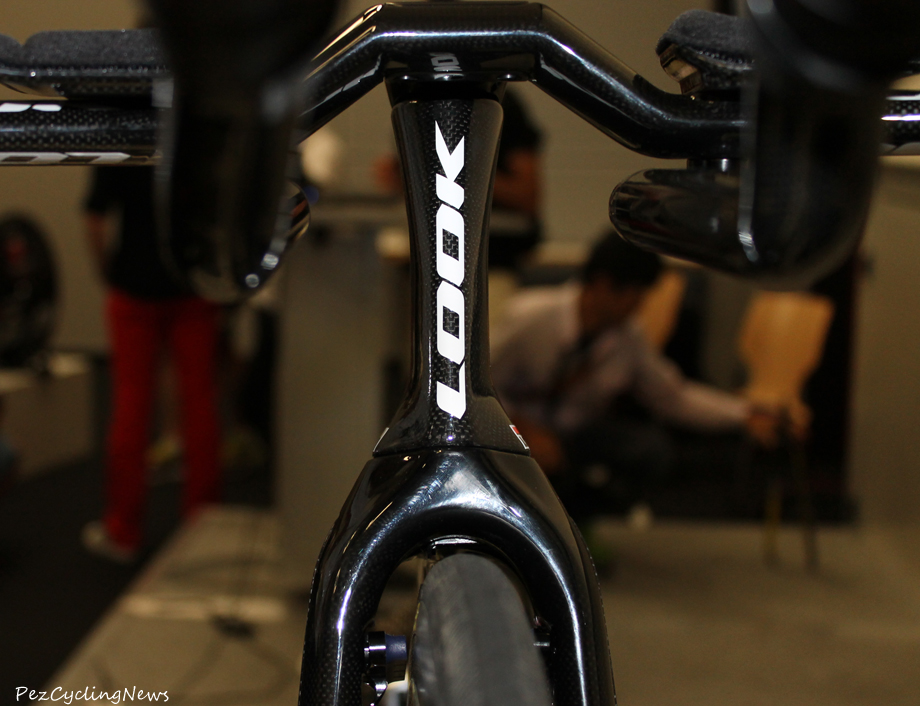 Check out that front end! The smallest headtube on the market at just 25mm wide – and still UCI legal. 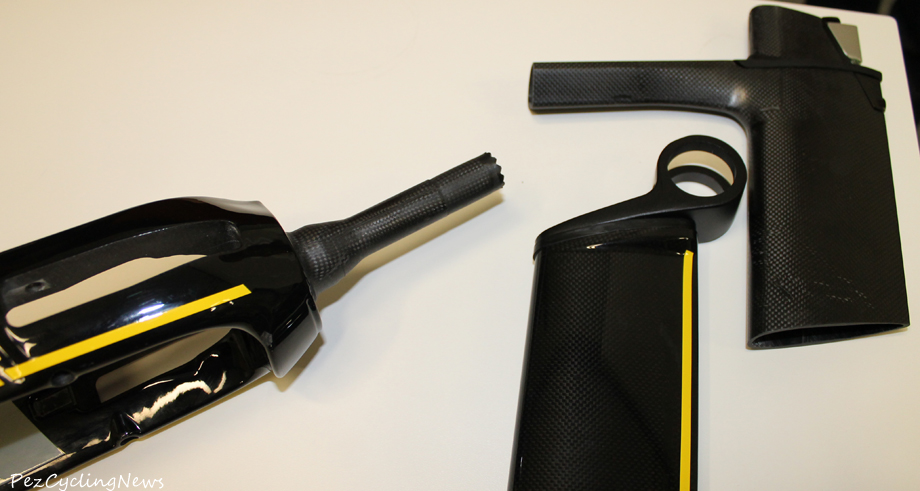 The narrow front end means that one super small steering tube had to be designed. Also in the photo is a cutaway of the frame and the easily adjustable seatpost for ease of adjustment and transport. 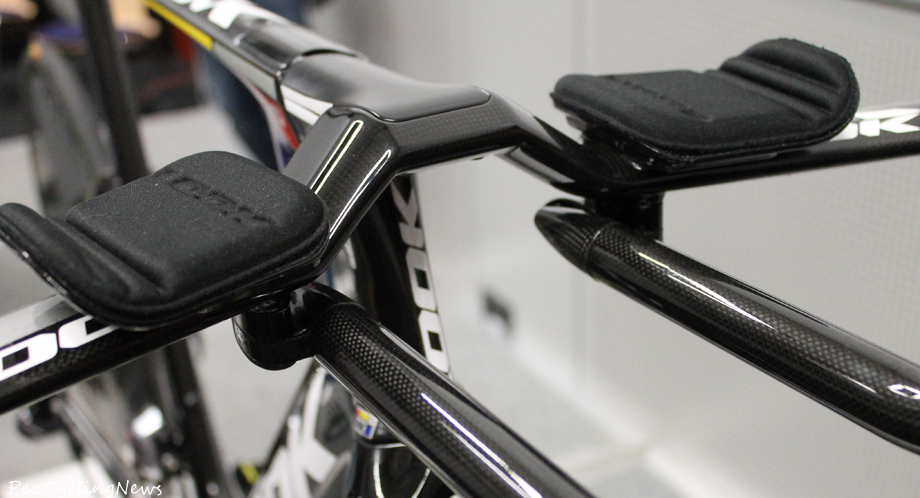 One of the keys to the 796’s slippery aero properties is the completely flat stem and profiled handlebars. 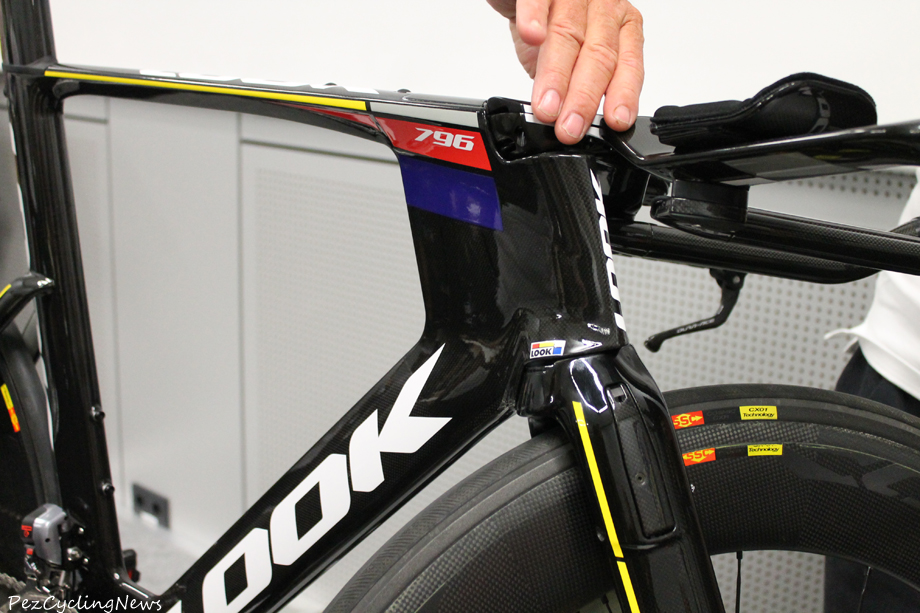 Inside the steerer tube is a ball mechanism that prevents the bars from turning anymore than this. 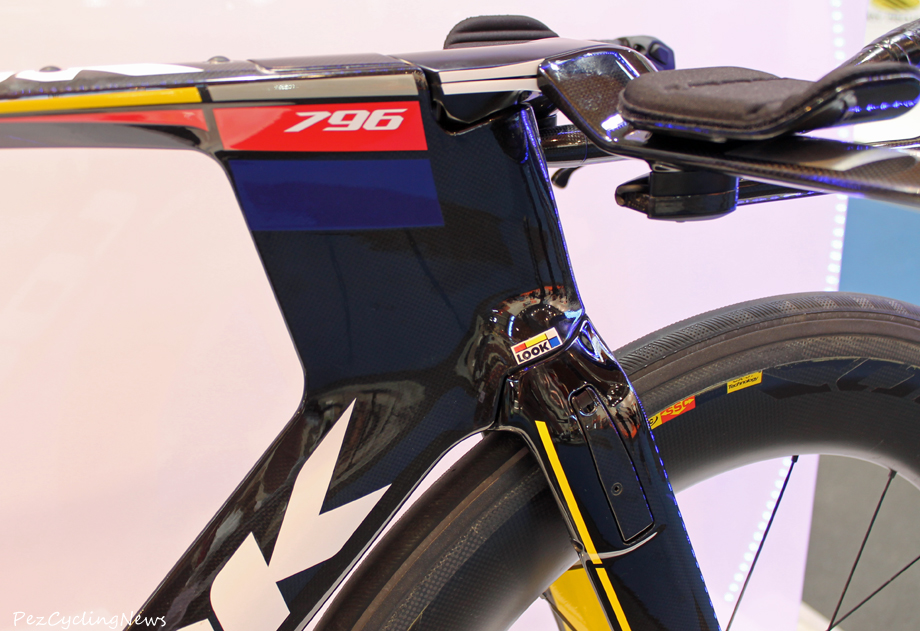 Notice anything missing? There are no cables or cable housings visible on the bike with everything routed inside the handlebar, stem and frame. The 796 was displayed with Di2 but is also compatible with mechanical gears. 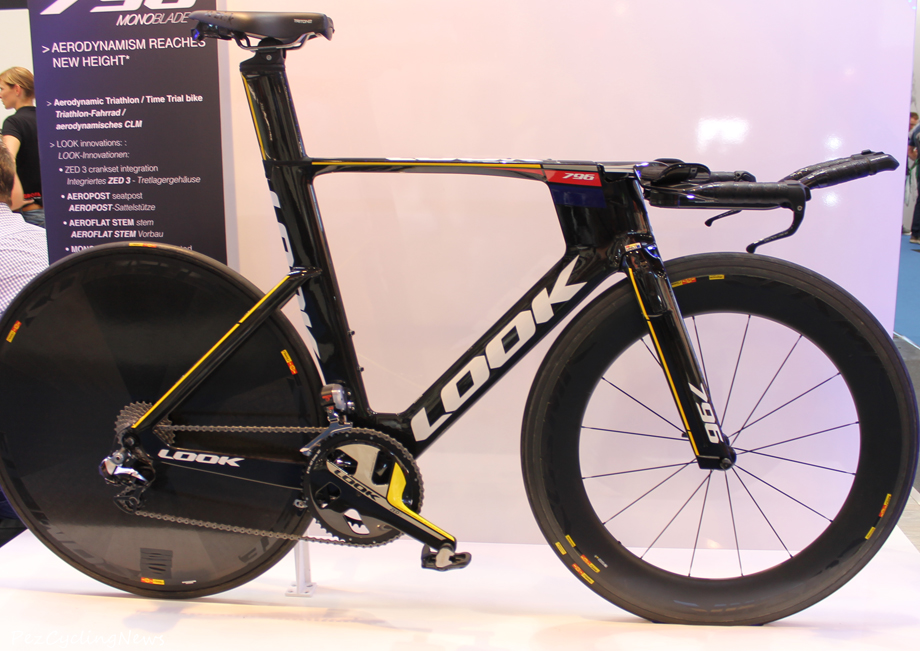 The frame of the 796 is made up of a mix of different carbon fibers in order to reach the best compromise between stiffness, weight and resistance. The carbon sheets used are ultra-light 1,5K with all the tubes sections NACA optimized for the best aerodynamics possible. 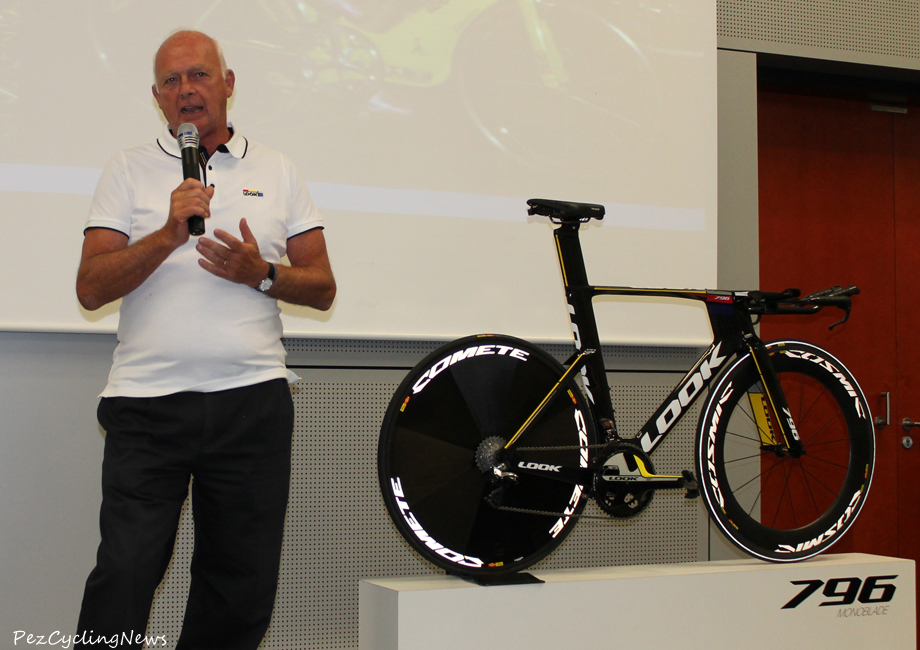 If you’re thinking that all these developments come with a big price tag then you’d be right but as LOOK’s President, Thierry Fournier explained, ‘We will never recoup the cost of the R&D of this bike but that wasn’t the point. We wanted to build the fastest TT bike ever and we have achieved that.’

To get your hands on a 796 of your own you will have to wait until they become available to the public in January next year at which time the frameset will be retailing for €6999 Euro with complete bikes starting at €8999 Euro.

Lots more to come from LOOK at the show with some very interesting lower budget but performance roadies, new clothing lines from the likes of Castelli and Sportful, SRAM’s wireless groupset, Rotor’s hydraulic one and the list goes on and on as we’re only just getting started…. keep it PEZ’d!