With bike technology progressing continually onwards, the days of massive leaps that have us journos salivating at the annual bling fests of Eurobike and Interbike are long gone – despite what the company PR’s say. That said there is one advance that has us scribblers at least discussing: Disc brakes for the tarmac world.

Whether or not you think it’s right, there are plenty of companies jumping aboard the wagon to see how good the band is. Here’s a closer look from Eurobike.

Before I look into who was there its worth a quick note to discuss the big player who wasn’t. When SRAM said we ‘had’ to be at the Eurobike demo for some big news, pretty much everyone en route thought it was going to be the hydraulic SRAM Red disc brakes we were shown images of at the SRAM Red 2012 launch in Majorca back in February. Sadly it wasn’t to be. In fact, the Srammies refused to even engage on the subject other than to say it will be a 2013 product. Whether it’s a production problem or a performance one I cannot be sure but, despite a mistimed sneak peak thanks to Specialized showing greyed out images on a frame only website picture proving their existence, the Chicago company remained tight lipped on details.

Colnago
Italian stalwarts Colnago may not be the brand you instantly think of when it comes to innovation but if you actually look, they have a history of industry firsts – straight bladed forks, custom carbon frames and technology advances in conjunction with motor manufacturers – Ferrari collaborations anybody?

First spotted at the Cambiago based company’s booth at the Taipei show back in March, Eurobike saw the production versions of the new C59-Disc on display. 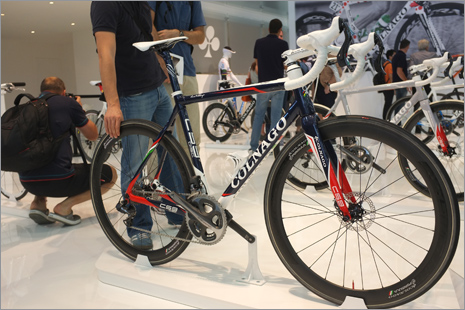 Externally the frames have very few changes but the popped collar Italians told us that the carbon lay up has been totally reworked to take into account not only the extra stresses on the carbon fork and chainstays but also the reduction in load on the seat stays – expect this disc brake version to be a little more comfortable out on the black top. 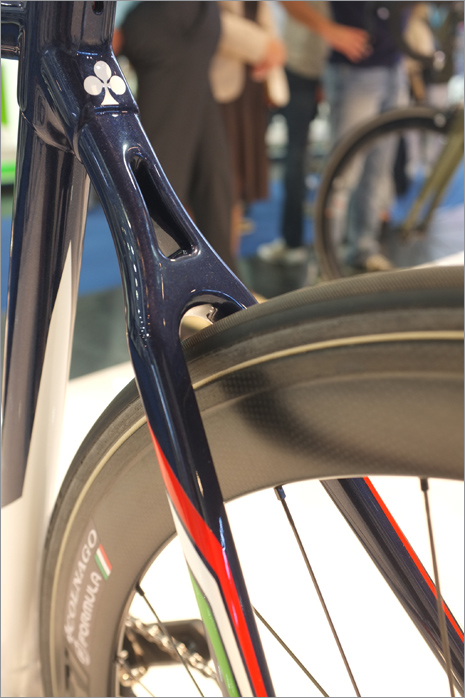 Being a style conscious company, Colnago didn’t want to play the converter box game – a big box hanging below the stem just wouldn’t cut it – Italian lines cannot be disturbed! In order to get round the problem, they worked closely with fellow Latin manufacturer Formula. 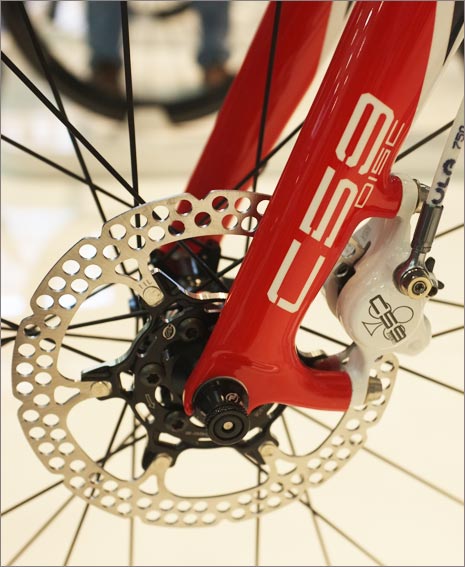 The advent of electronic shifting has effectively made room for the hydraulic braking revolution that’s coming to road bikes. Without the mechanical internals in a brake and gear lever, the master cylinder for an oil based set up has somewhere to go. All Formula needed to produce was a hydraulic actuation lever that incorporated a couple of electronic micro switches and the requisite connection. Originally they worked with Shimano and created levers for Shimano’s Dura Ace Di2 as Campagnolo didn’t want to play ball, but it would appear that that has been resolved and now a Campag EPS version has been designed – in fact, for the first year only Campag will be available (Colnago said Formula were having difficulty getting the details for the connection of the new 9000 series Di2 group). 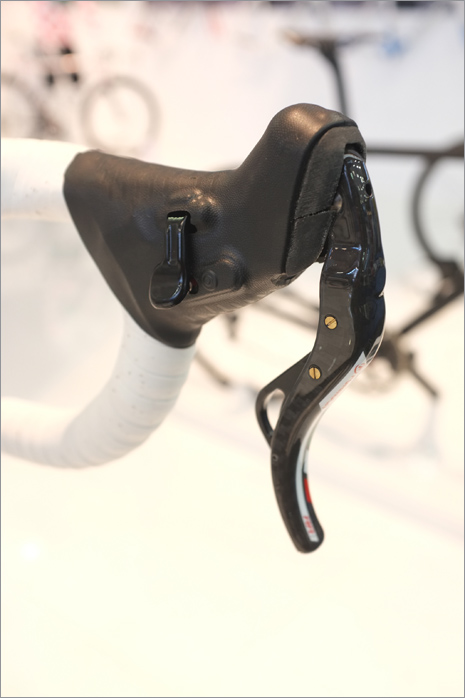 Based on Formula’s XC mountain bike brake set – the R1 – the C-59 branded RR-1 brakes are sensibly sized and the overall mass increase is said to be minimal. Some of the difference may be due to the wheelset. With no braking surface reinforcement required, the Italian made 50mm carbon clincher rims should lose a little heft – although Colnago neither confirmed nor denied this. Pricing information was scarce at the show, but what I got out of them was a disc brake equipped bike would come in at around Ђ150 more than an equivalently spec’d calliper model. With 140mm rotors front and rear, there’s likely to be enough power to overwhelm the small road contact patch if excessively hauled on, but modulation and control are likely to be the key benefits. 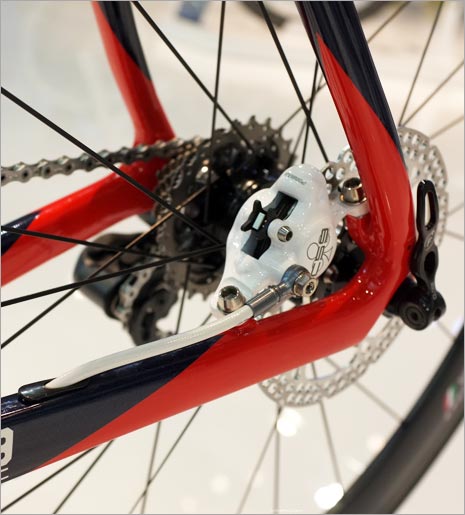 Remove climatic based fears and the potential benefits begin to add up – scared of carbon rims in wet weather? Discs dismiss the issue. If heat build up issues have been remedied, and frame performance can be maintained despite the additional carbon in the mix – It could be a very interesting development.

Hope Technology
Hailing from the hills of Lancashire, Hope Technology has been developing it’s V-Twin converter for a couple of seasons now but Hope’s Alan Tudhope says they are very happy with it now. 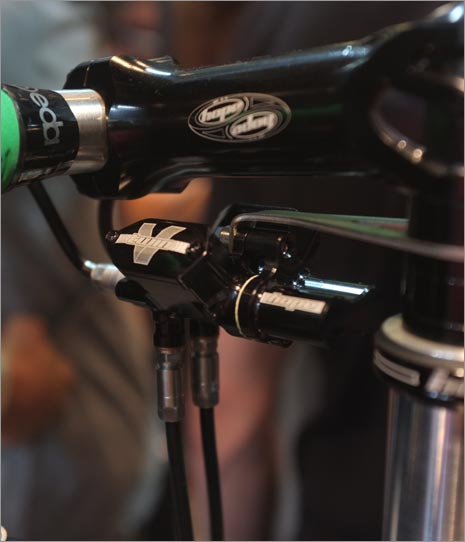 In much the same way as TRP’s Parabox, the V-Twin converts standard brake levers cable pull into hydraulic piston movement. Despite these similarities, the method is surprisingly different. Rather than cable pulling on a lever that in turn pushes a piston, on the V-Twin the cables actually run through the centre of the master cyclinder. Hope wanted no exposed cables or levers to get clagged up as they see the primary use for the product as Cyclo Cross. 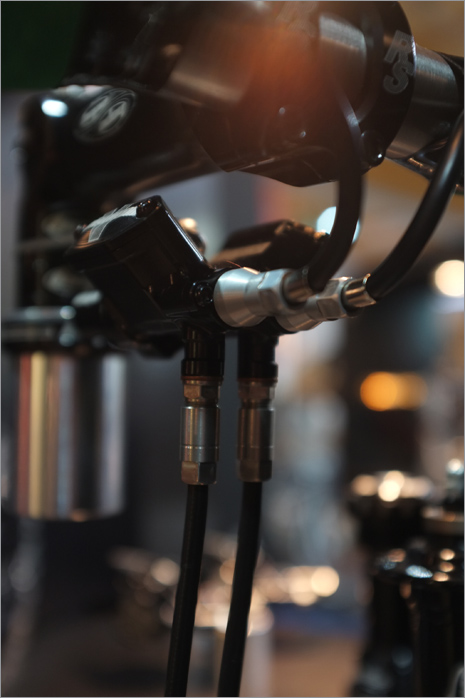 Dual master cylinders are hewn from a single piece of aluminium making the most of the potential stiffness in the system and therefore maintaining hydraulic performance. The one-piece theme continues onto the Hope X2 caliper – a proven light and dependable cross-country brakeset. 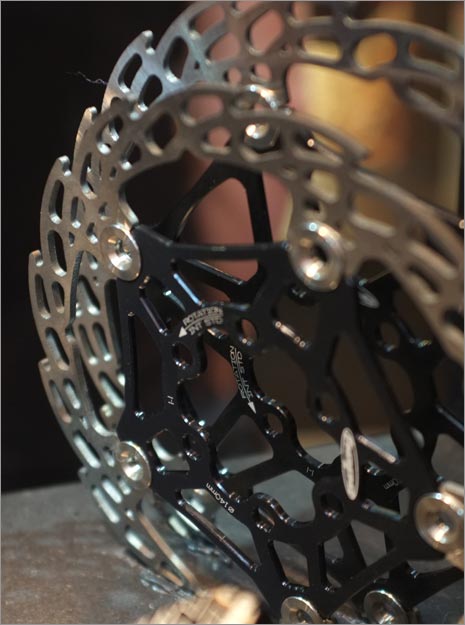 With a 140 and 160mm rotor option, both using an aluminium carrier and profiled steel braking-surface to dissipate both heat and grime, there’s something to consider for both road and cyclocross use. 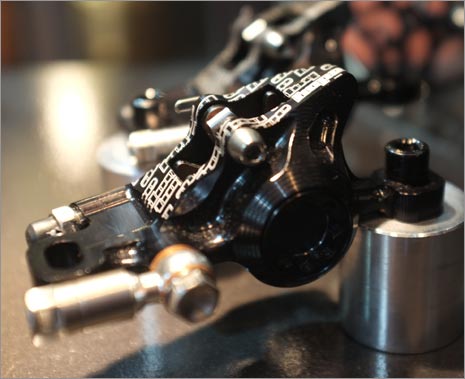 While it will never compete with the clean lines of a full hydraulic system, the stylish design and aesthetic fit its purpose perfectly.

BMC Gran Fondo GF02
BMC launched their endurance bike, the GF01, back at the end of the Classics season and it was seen under Ballan and the team during those races. The racers used a carbon fiber version of the GF01 and at Eurobike, BMC showed an aluminium variant – the Gran Fondo GF02. 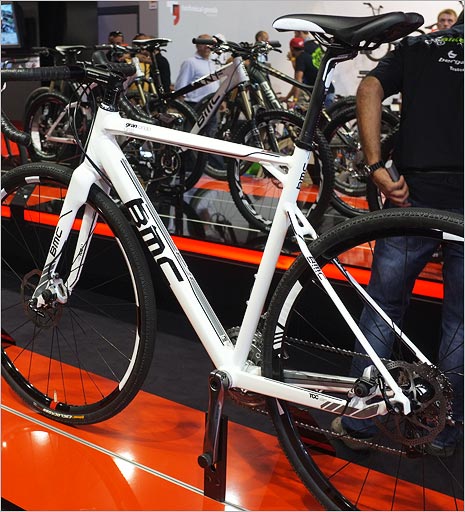 The aluminium frame has been designed around the same theories of adding comfort without reducing performance related stiffness. TCC may be BMC’s TLA for Tuned Compliance Concept but the theory is sound enough. Specific areas of the frame have more flex than others – the drop in the seat stays as they leave the rear of the seat tube allow for some extra flex, and similarly the upswept chainstays just before the dropouts are engineered to offer some addition vertical movement. 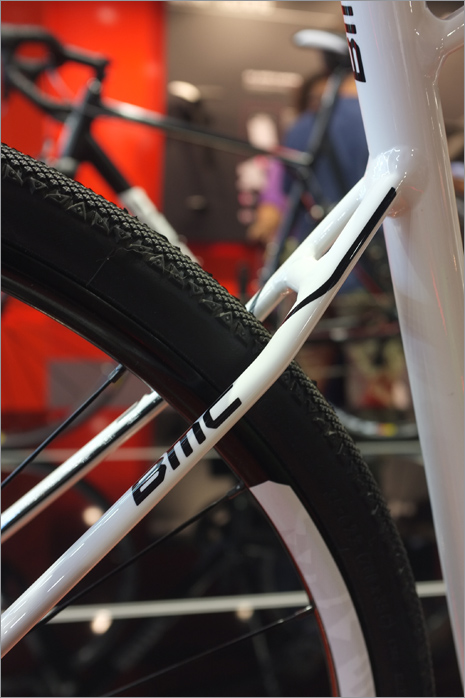 A largely unsupported seatpost allows some bowing of the top tube to allow the saddle rearward movement on rougher terrain. This is all Ill and good but there was actually a far more interesting detail but hiding out at the base of the forks and stays: integrated disc fittings.

The GF02 on the stand was set up with dual purpose cross tyres, but the Swiss folks told us it’s designed as an endurance road bike first and foremost. Rack and fender mounts hint at its potential versatility and once I get some hydro discs available, paired with electronic shifting, this could be the future of all purpose machines with minimal maintenance.

And finally…
It wasn’t just road bikes that BMC was experimenting with. Long time supported athlete Roger Rinerknecht represented Switzerland in the BMX event at London 2012 and the Grenchen boys had a disc equipped prototype 20” race bike he’s been testing. 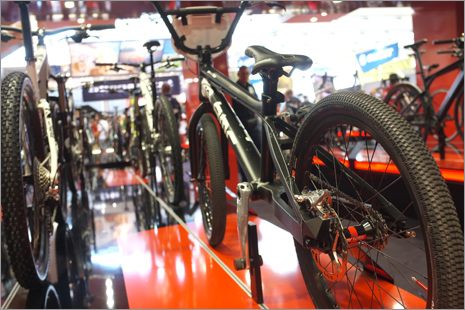 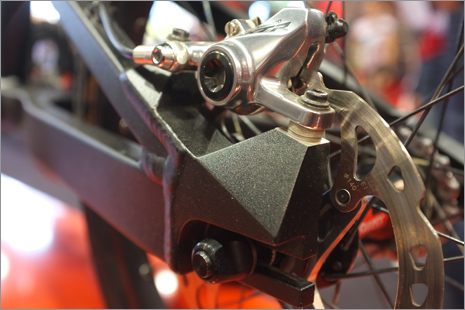