Bikes, bikes and more bikes. Eurobike is the biggest bike show in the world and today we look at some of the best and brightest machines on display from Germany with new models from LOOK, Canyon, DeRosa & Nevi plus a host of WorldTour bikes direct from the peloton.

Having already covered the worldwide launch of the new LOOK 796 time trial/triathlon bike earlier in the week, I was also keen to check out another of LOOK‘s new bikes at the show, the 765. 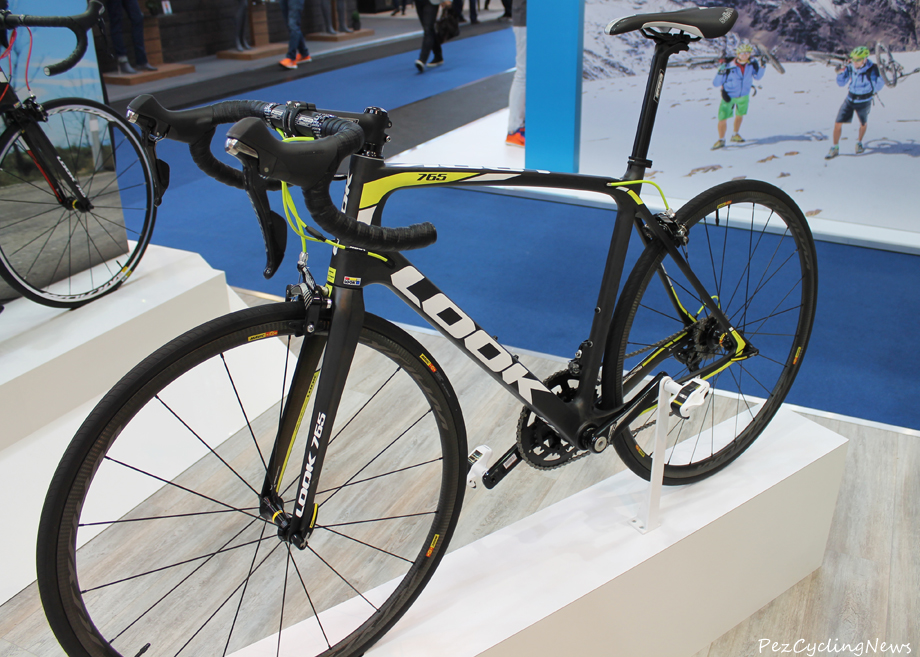 This is a bike that has received a lot of trickle down technology from their top bikes in terms of construction and aerodynamics know how but in a much more realistically priced budget for the common rider. 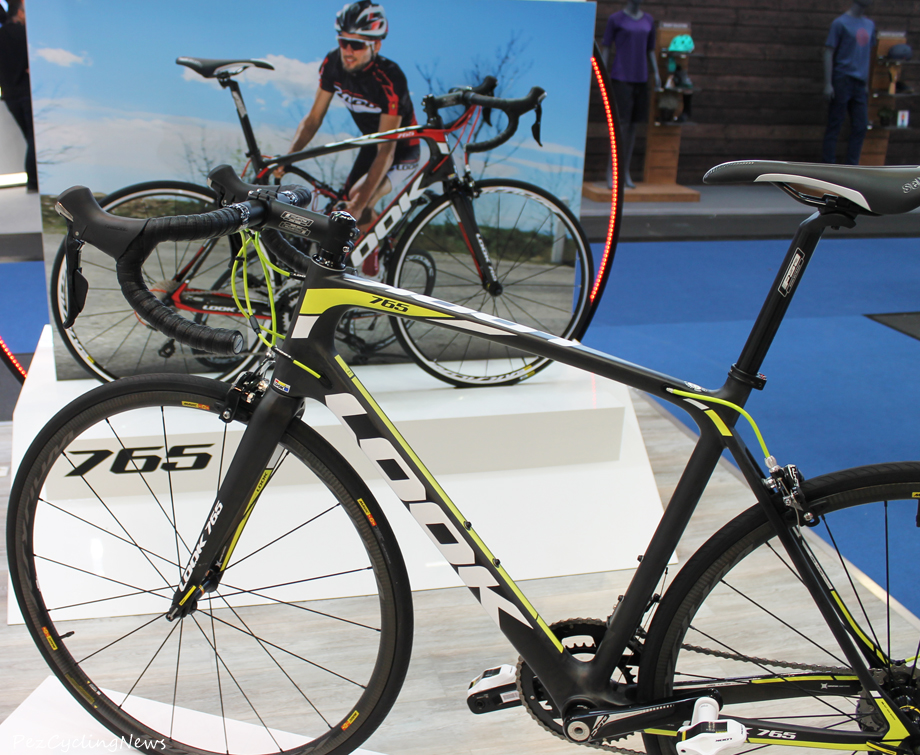 The design of the new 765 has been inspired by the company’s current 695 and features a new technology in frame design, ‘Carboflax technology’. This technology is actually something new in the industry where a layer of flax fiber has been sandwiched between two layers of carbon fiber to improve the comfort of the frame as the flax fiber is more shock absorbing than carbon while it gives away nothing in terms of rigidity. The flax fibers are used in the key shock damping locations on the frame, the chainstays and the fork legs. 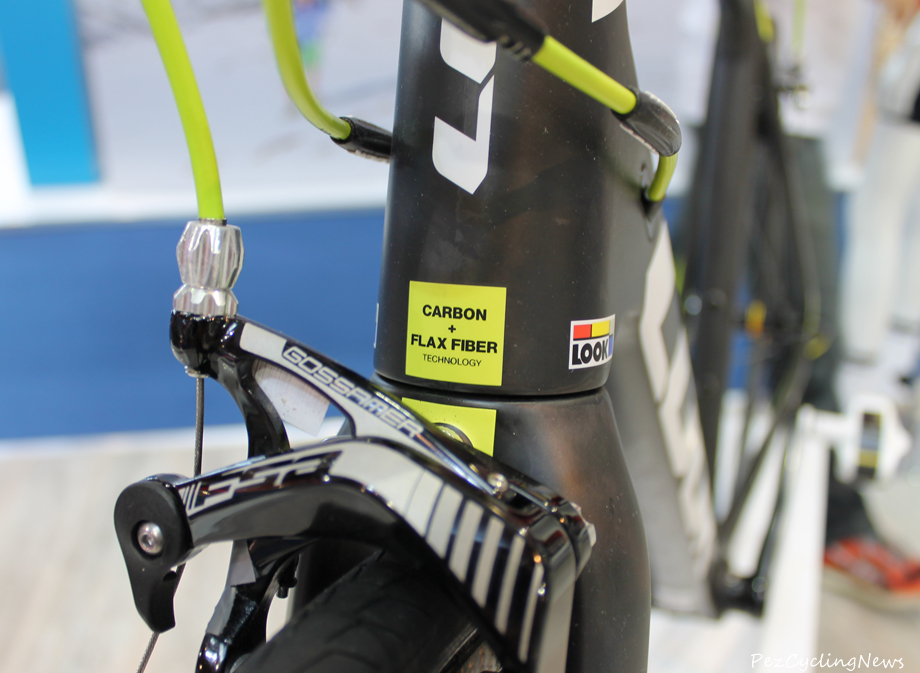 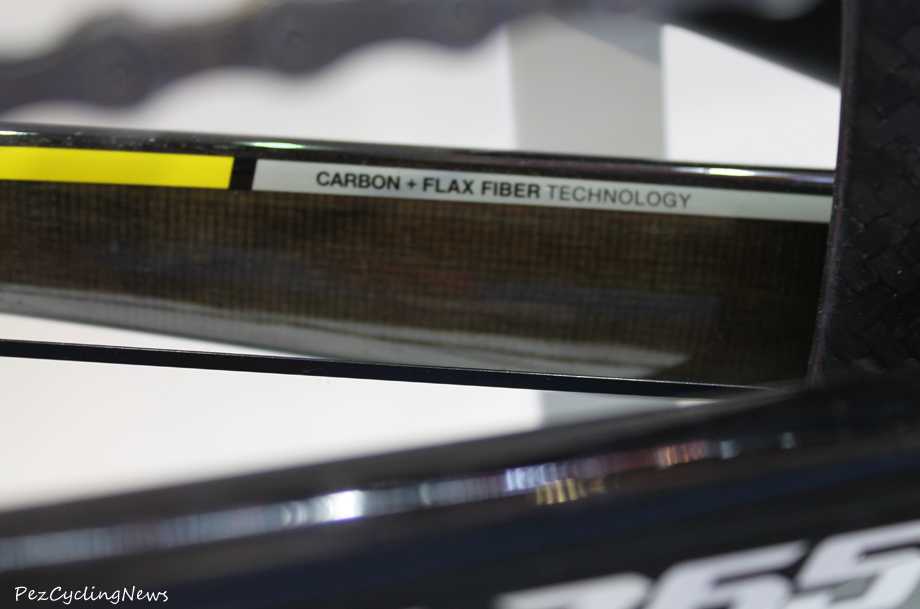 The big advantage of the Flax Fiber is obviously its shock absorbing abilities but there’s also another big advantage in that LOOK have now created a comfortable endurance bike without any weight penalty as the flax fiber has replaced a layer of carbon fiber meaning there has been no increase in weight – something that many other elastomer styled endurance ‘comfort’ frames can’t say. 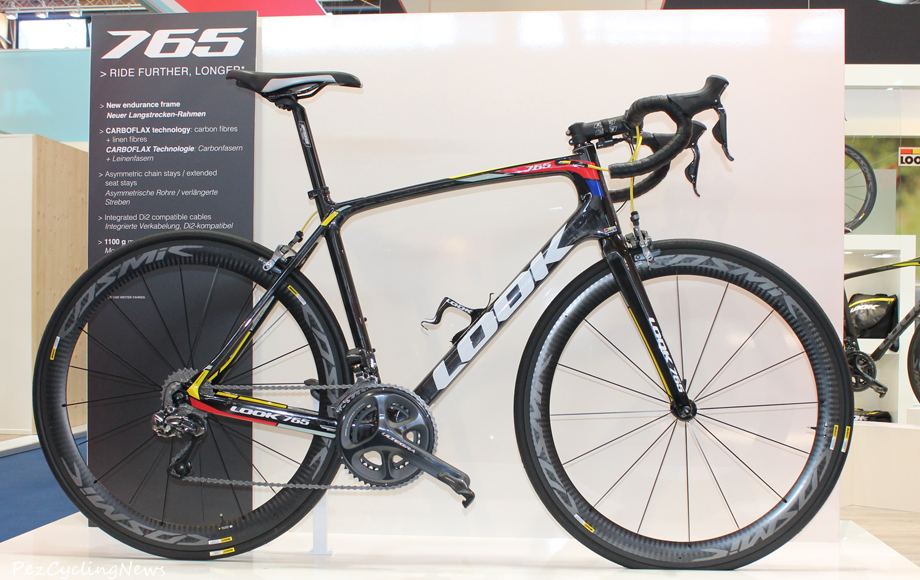 LOOK have managed to bring some high end technology to the 765 to make what looks like a very interesting cyclosportif/race bike without the high end price tag. For 2016 they are offering a number of different bike specs to the 765 range with a 105/FSA equipped 765 starting at just 2090 euros, an Ultegra/FSA mixed (the black and fluoro model pictured) model at 2499 euros, full Ultegra for 2899 euros and the Ultegra Di2 model pictured above at 3599 euros. US prices to be announced soon but crack out your currency convertors and hassle your local LOOK dealer for more info as these bikes look to be a very competitive race/endurance bike perfect for some long miles in the saddle. lookcycle.com

Another big manufacturer getting a lot of attention was Canyon. Over at the German manufacturer they have embraced disc brake technology in a big way with a number of new disc braked equipped models coming for 2016. 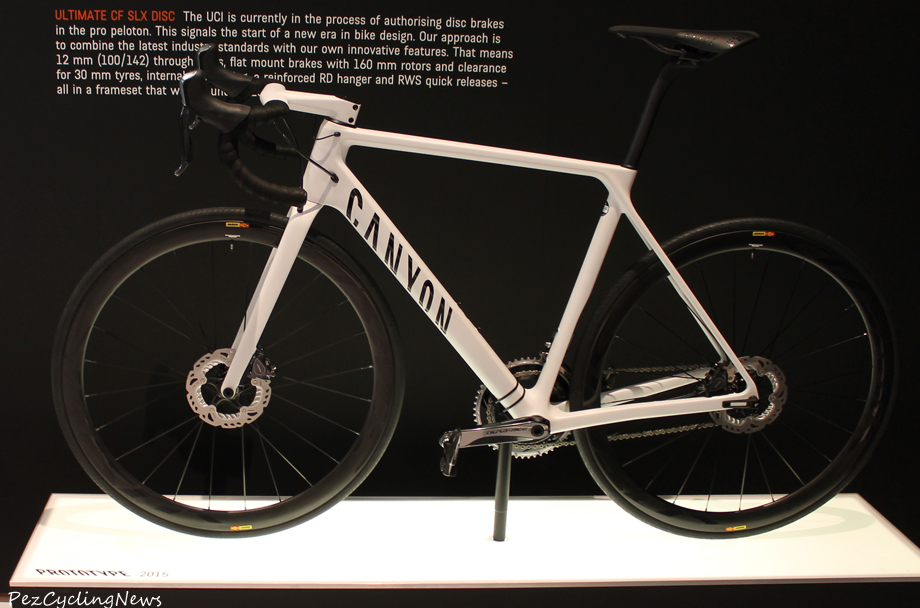 This CF SLX Disc in elegant white was a classy looking bike that had all the benefits of their multiple race winning CF SLX frame but with disc technology in the form of through axle flat mount brakes with 160mm rotors that has clearance for 30mm tires and all with a frame weight of under 1200 gr. A light ride for sure but a heavyweight when compared to the new Ultimate CF EVO next to it that weighed in for just 4.85kg the complete bike in size M. 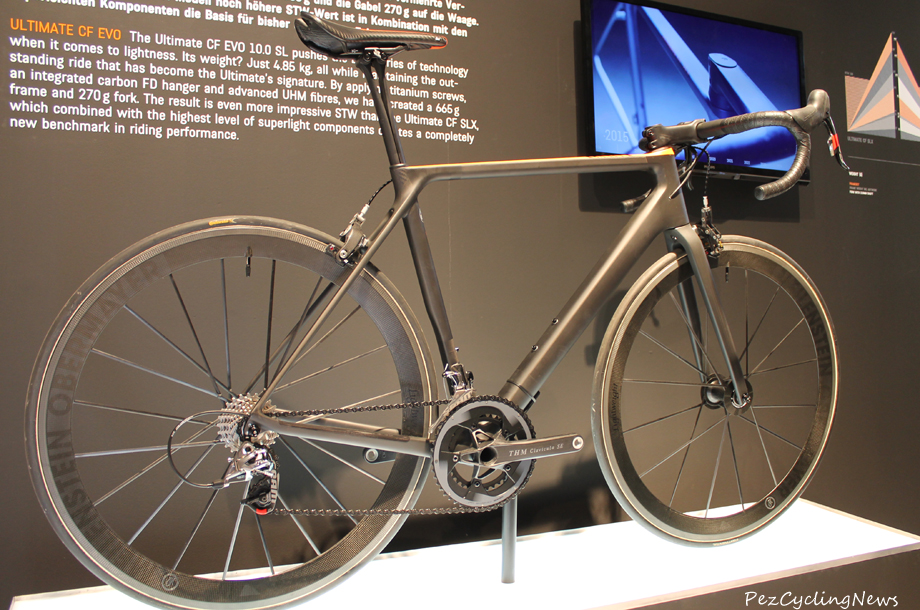 This was one well tricked out ride with Lightweight wheels and SRAM Red but it was the bikes just a little bit further along in the stand that were garnering the most interest with two pro’s rides on display. 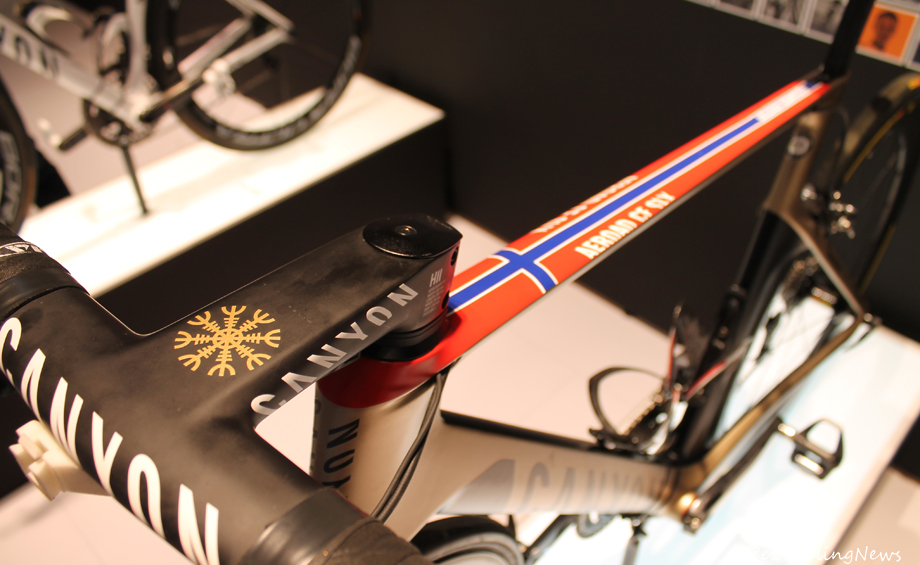 First up was Alexander Kristoff’s Aeroad in its custom paint scheme that extended just to his one piece handlebar/stem combo that are starting to see a real comeback in the professional peloton this year. 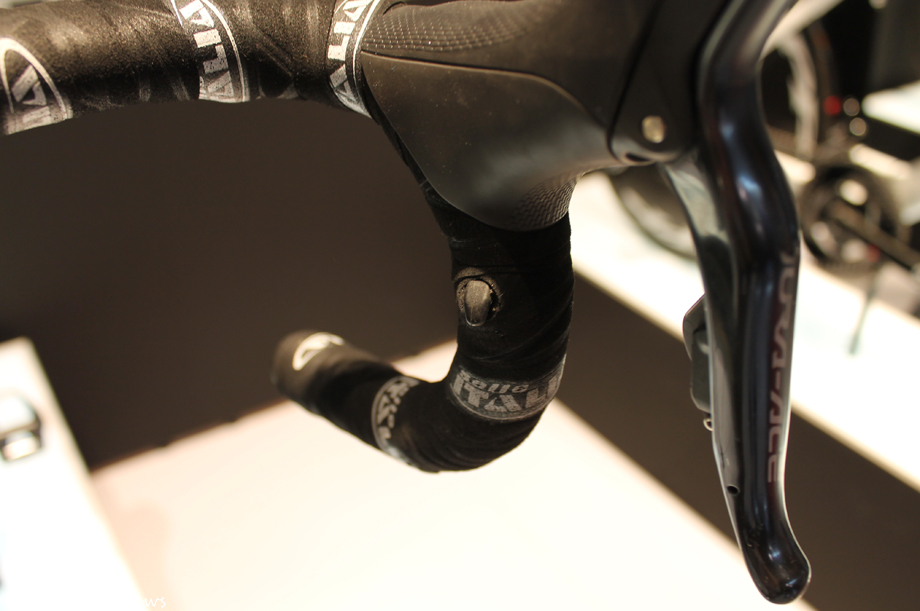 The one piece system is becoming more and more popular with powerful sprinters like Kristoff for its superior stiffness and another common addition on sprinter’s bikes in particular are the extra Di2 gear shifters in the drops with Alexander’s being almost hidden under the handlebar tape. 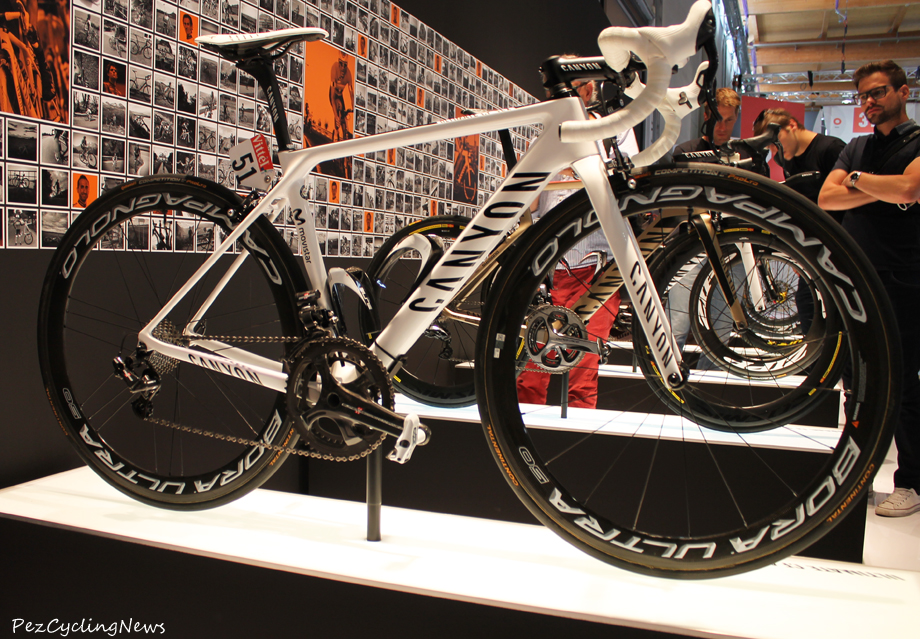 Less flashy than Kristoff’s Aeroad was Nairo Quintana’s white jersey winning Tour de France, Ultimate CF SLX. In its simple yet elegant white paint with white handlebar tape, brake hoods, saddle and pedals the bike was stunning in real life but would be a pain to clean for sure…. that’s why you have mechanics I guess! For more on the 2016 range from Canyon head on over to canyon.com 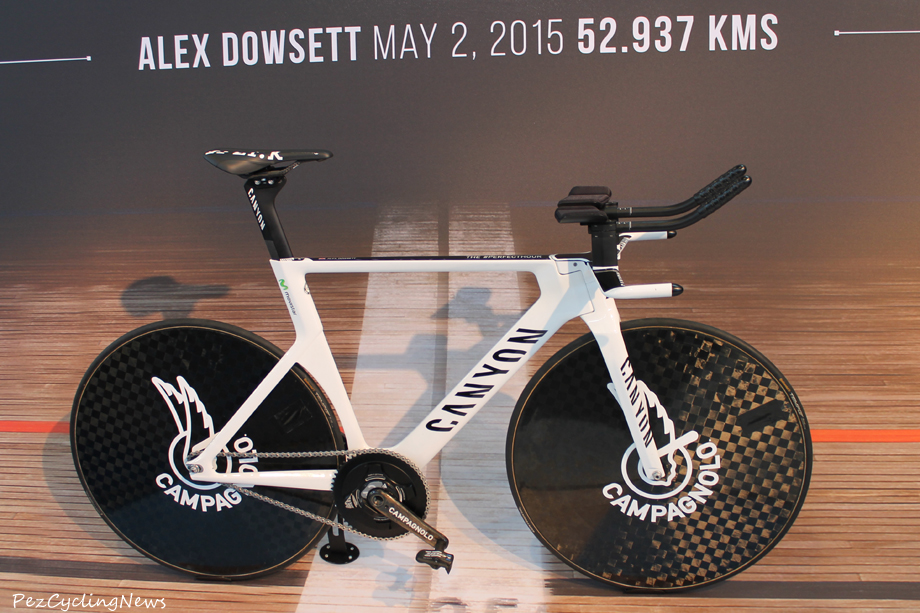 Alex’s bike wasn’t actually at Canyon though, instead it was on the Campagnolo stand where they were showing off the bike’s Ghibli track disk wheels but maybe they could have found something better than some very low-tech duct tape to cover the valve opening on such a high-tech pair of wheels? 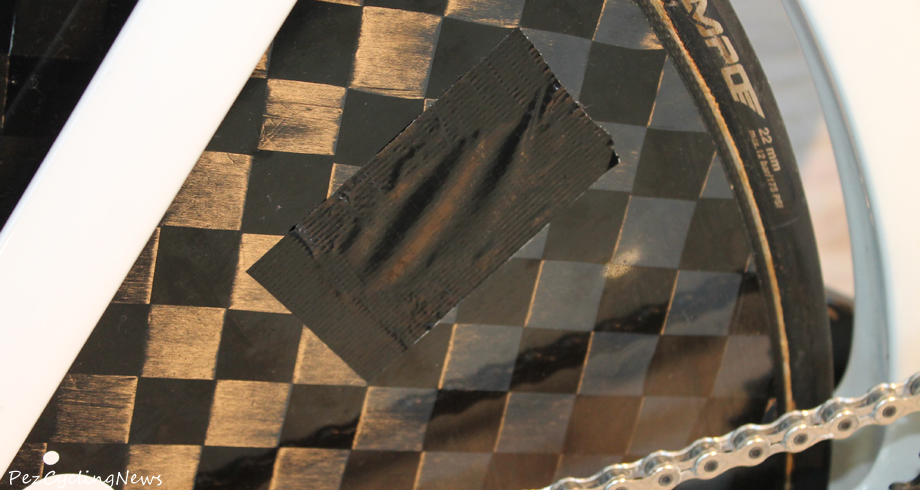 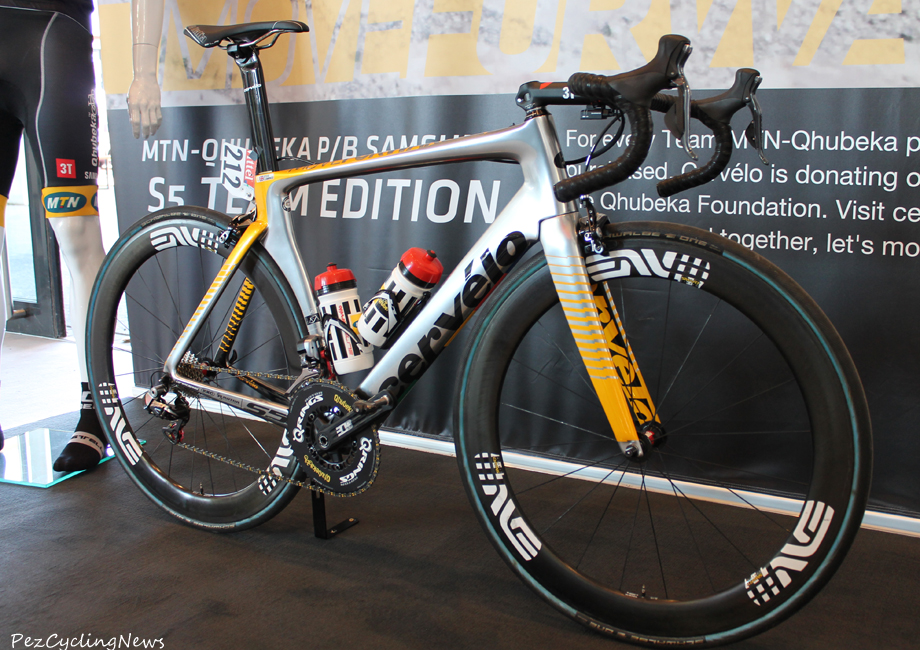 Decked out in its special Tour de France color scheme this was one cool looking bike with some interesting features that included custom jockey wheels and a very sharp looking KMC, DLC (Diamond Like Coating) Ace chain. 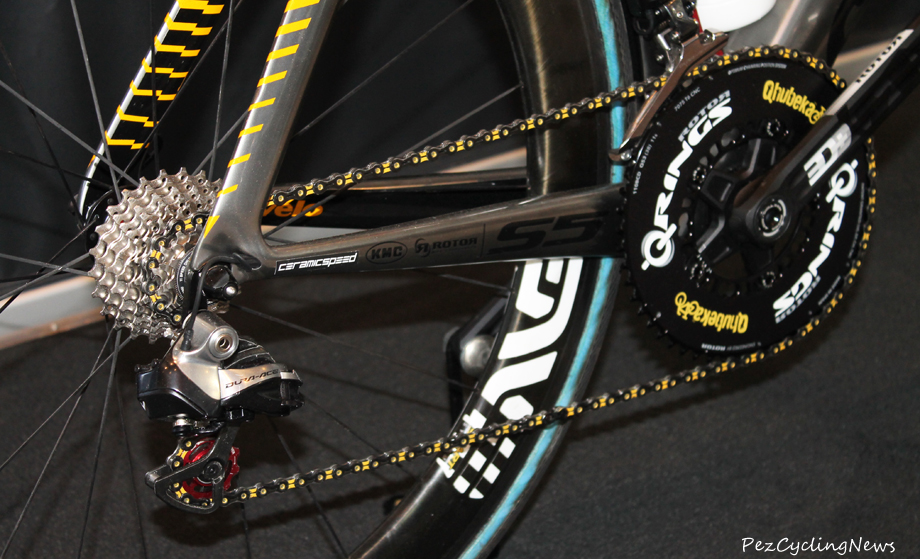 Steve’s stem length and angle was also the typical ‘long and low’ pro-style and it aways amazes me how some pros who are actually quite tall like Steve (1.90 m – 6 ft 3 in) can get so low on their machines. 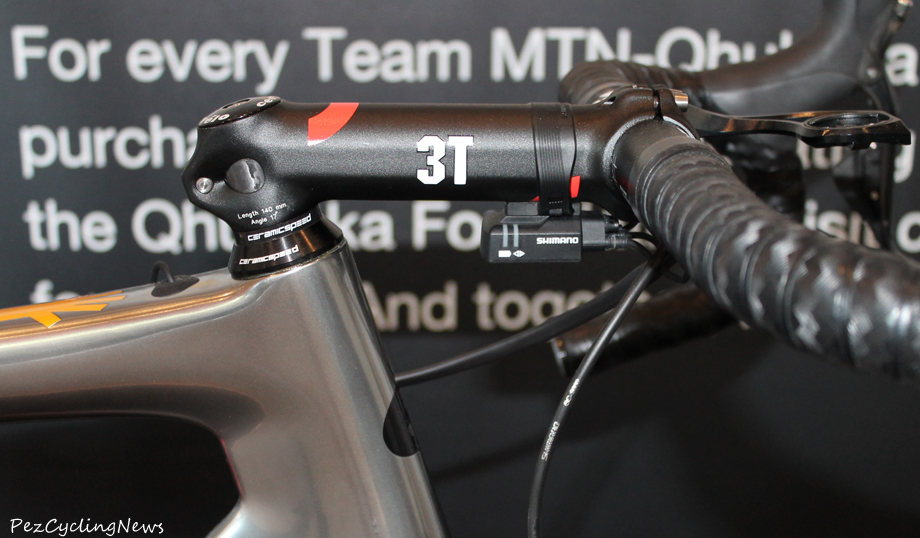 Lovers of titanium will be happy to know that the wonder material isn’t dead yet – far from it in fact as manufacturers such as Nevi have come out with some very sharp looking 2016 models like this Spinas model designed for disc brakes. 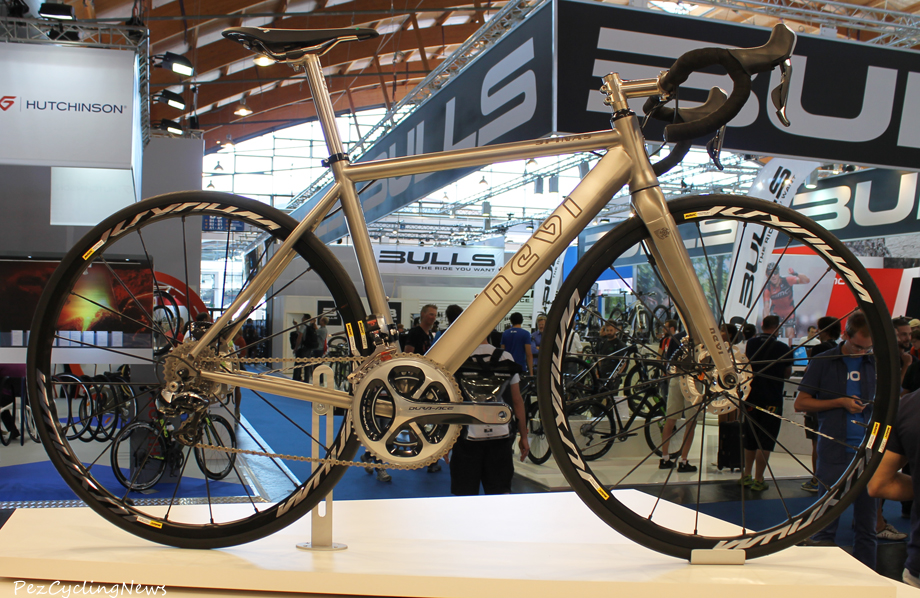 The finish on the bike was top class and it included Nevi’s brand new titanium disc fork tapered for a 1,5” headset that comes in at a weight of 550grams. 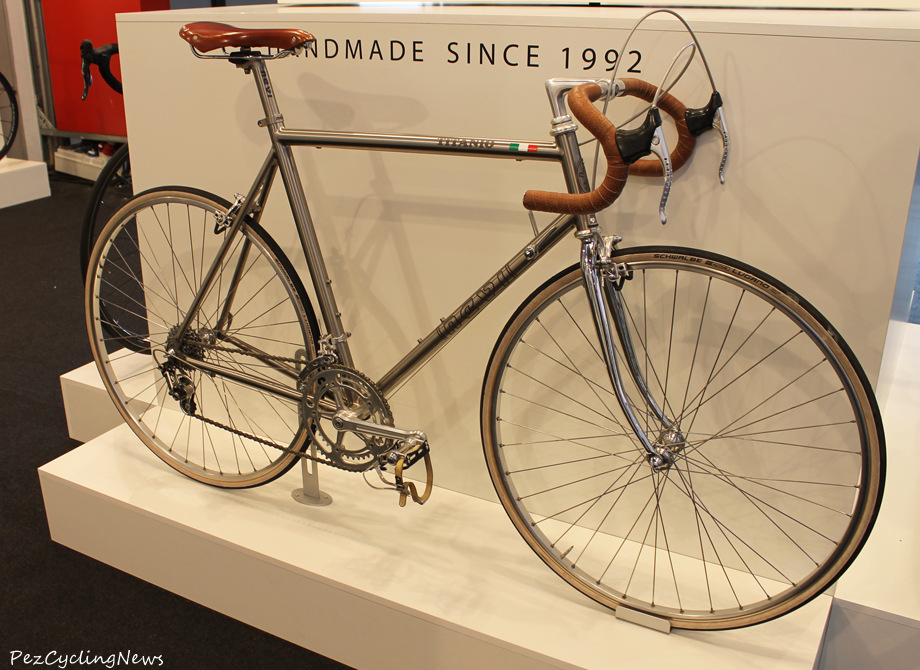 Also at Nevi was this classic looking, yet brand new bike appropriately named, ‘The Classic’. It’s a 3AL- 2,5V titanium frame that is built with the criteria of a frame from years ago but with technological material of today. 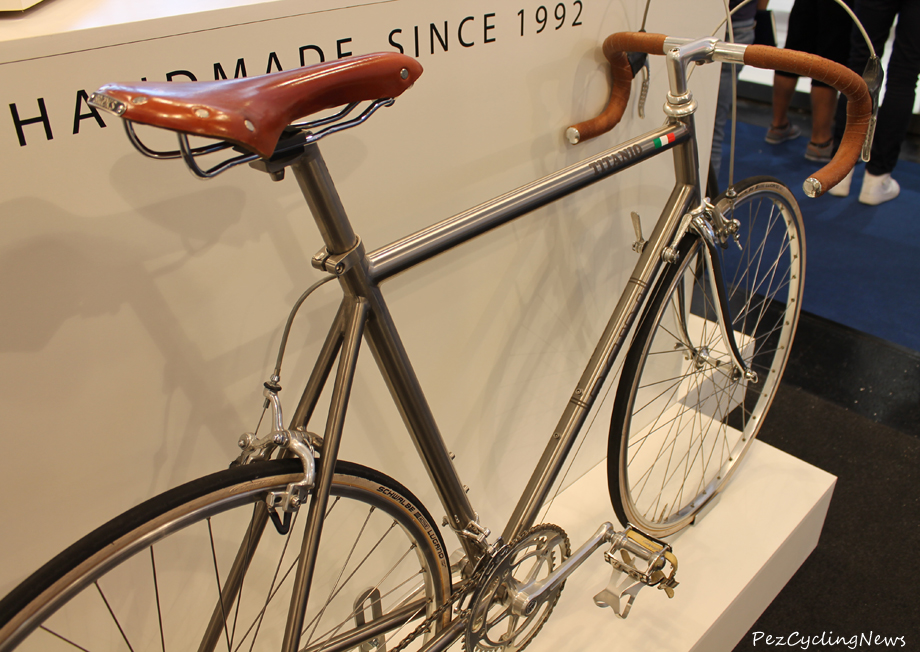 The Classic is a very special bike indeed and is actually assembled with new, never used Campagnolo Record parts from 1979! The bike will also be made to order with recent groupsets with either dual control or downtube levers for a more reasonable cost than this particular 1979/2016 spectacular machine. For more from the Italian titanium masters you can go to nevi.it

On the Nevi website you won’t find the next Nevi model pictured below though and it wasn’t at their stand either, instead it was at wheel manufacturer, Fast Forward‘s stand. 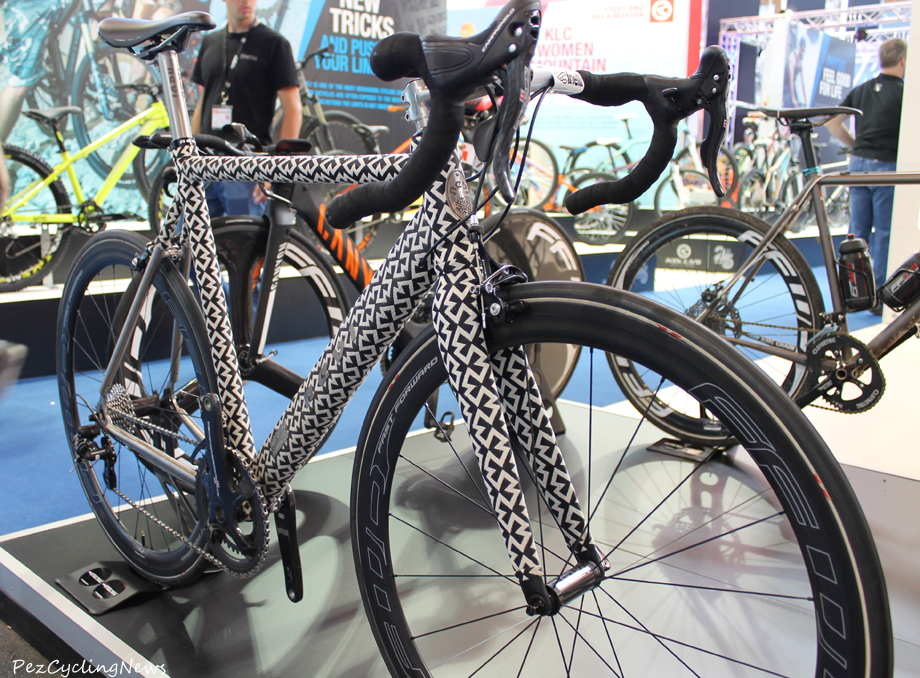 It was supposed to be showing off some of the latest wheels from the Dutch manufacturer but instead everybody was looking at the frame and wondering, why? With Nevi renowned for their craftmanship and exquisite welds on their titanium frames, a cloth wrapped one certainly stood out… 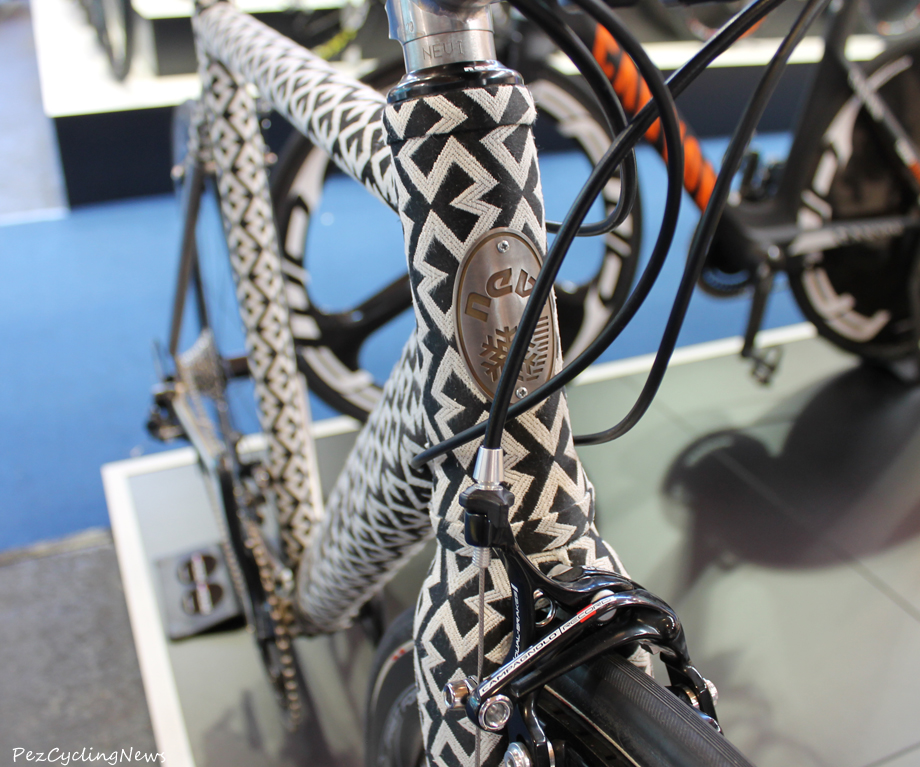 As the owner of a DeRosa myself I couldn’t help but go over to the DeRosa stand for a quick look at some beautiful bikes that I can’t afford. 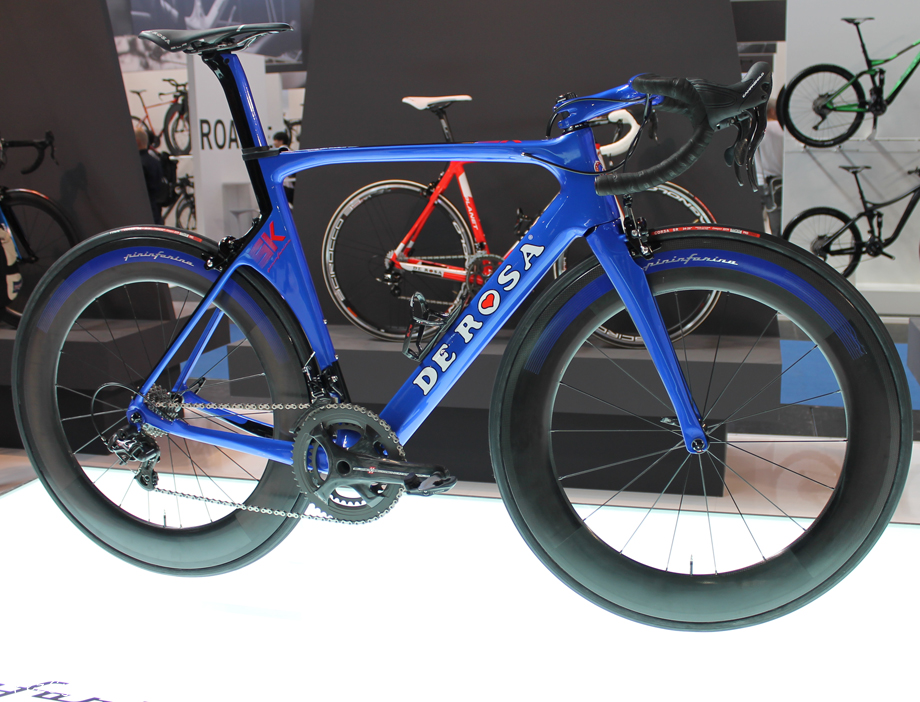 Their new partnership with boutique car brand, Pininfarina and their renowned design and aerodynamics knowledge has resulted in the spectacular, SK Pininfarina series of bikes. 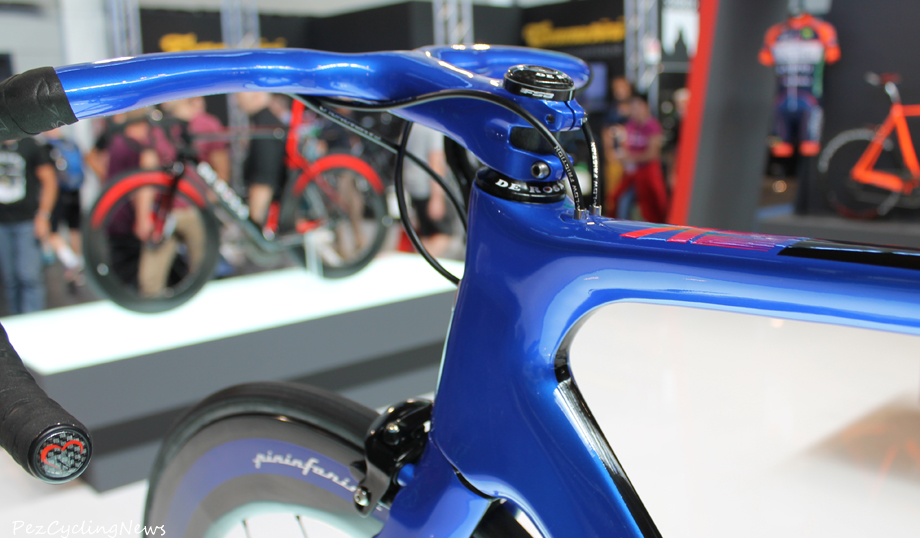 The partnership between the two brands is billed as ‘the technology perfection branded De Rosa and the elegance of Pininfarina’s shapes’ with the resulting frame said to give the ideal rigidity without compromising the stability, comfort and style. 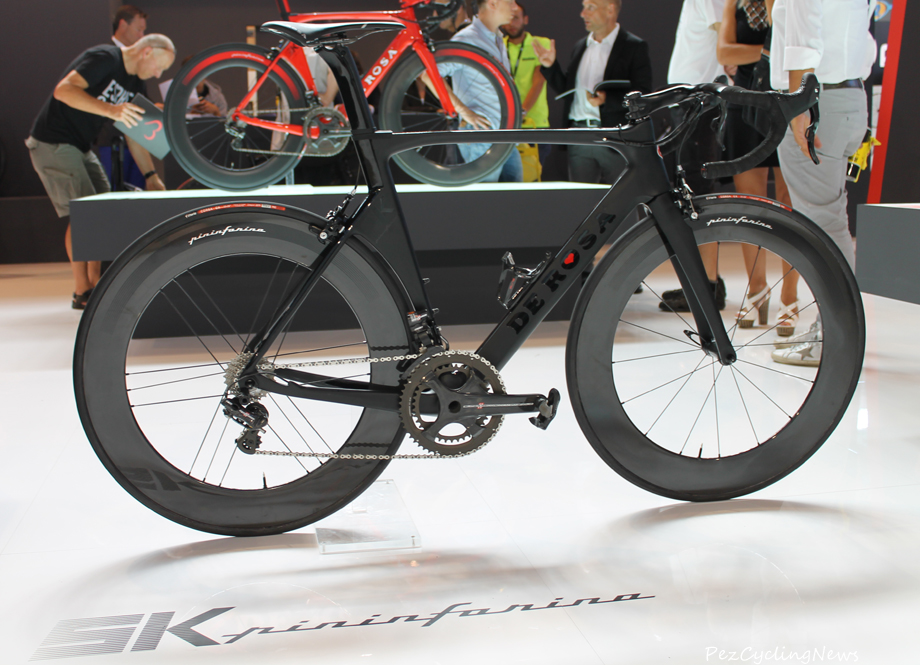 For more on the 2016 range check out derosanews.com

Lots more to come from Eurobike and be sure to check out my First looks from the show and the Groupsets, clothing and Cameras pieces if you haven’t already done so.