By Erin Berard On Nov 3, 2016
Share
Like PEZ? Why not subscribe to our weekly newsletter to receive updates and reminders on what's cool in road cycling?

After exploring Eurobike for 3-full days, you’d think that all the colors, lights, bikes, wheels, helmets, glasses, shoes, would all start to blur together, but that’s where you are wrong… at least for one brand in particular, Germany’s own Canyon Bicycles. Instead of drowning out, their bikes stood out from every booth and corner of the show.

Granted, most of you PEZ readers are probably too busy cycling to play video games, but it’s almost akin to the scenario where Eurobike is the scene of a life-sized video game and Canyon bikes are the hidden “gems”. 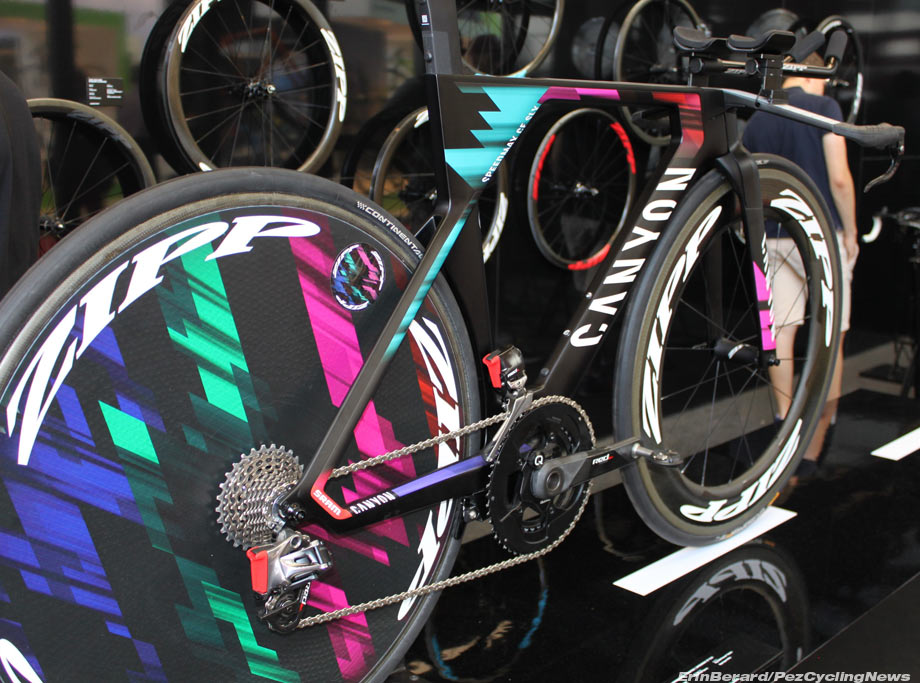 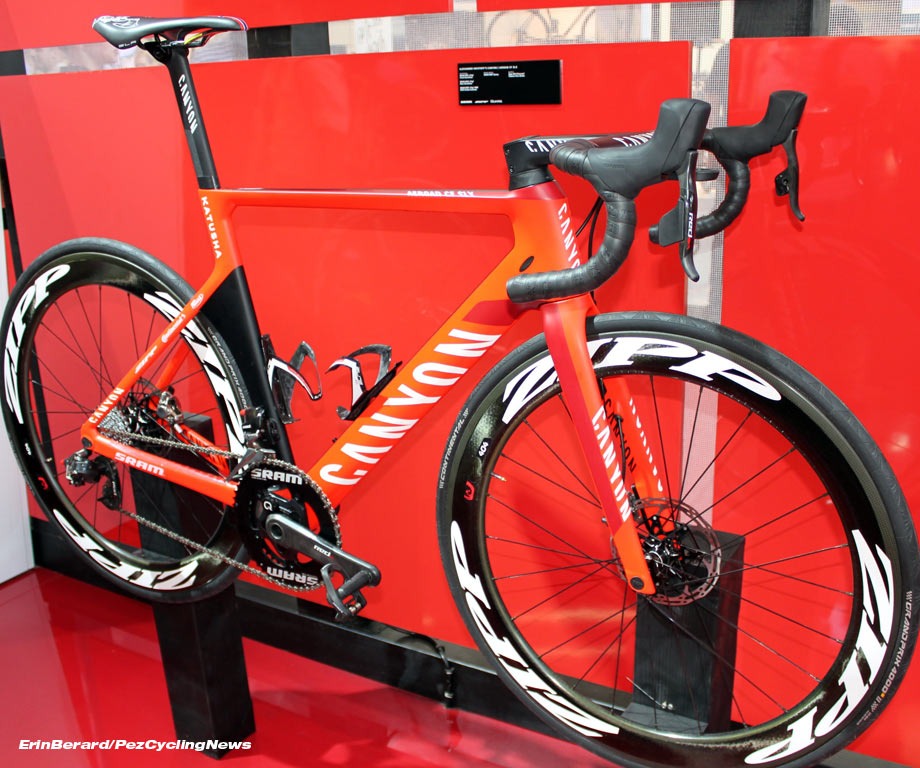 As I arrived at the Canyon booth for my meeting with Matt Heitmann, Chief Marketing Officer, I could not wait to find out what additional surprises were in store for the brand this upcoming season. The company was started by the father of current owner Roman Arnold, who would sell Italian bike accessories from their trailer at races around Germany. He then formed the company and called it “Radsport Arnold” which means ‘Bike Sport Arnold’ and eventually grew it to become the largest Trek dealer in Germany, ironically. In 2001, the company changed direction to become a bike manufacturer instead of a supplier and then committed itself to carbon fibre. A wise decision, evidenced since then by both the company’s 30 percent market share in Germany and their lengthy list of prestigious international design achievement awards.

For North American readers, the most exciting news for 2017 is that Canyon will be launching road and mountain in the US. Matt then walked me through the stars of the show from triathlon/TT, to road, to gravel. 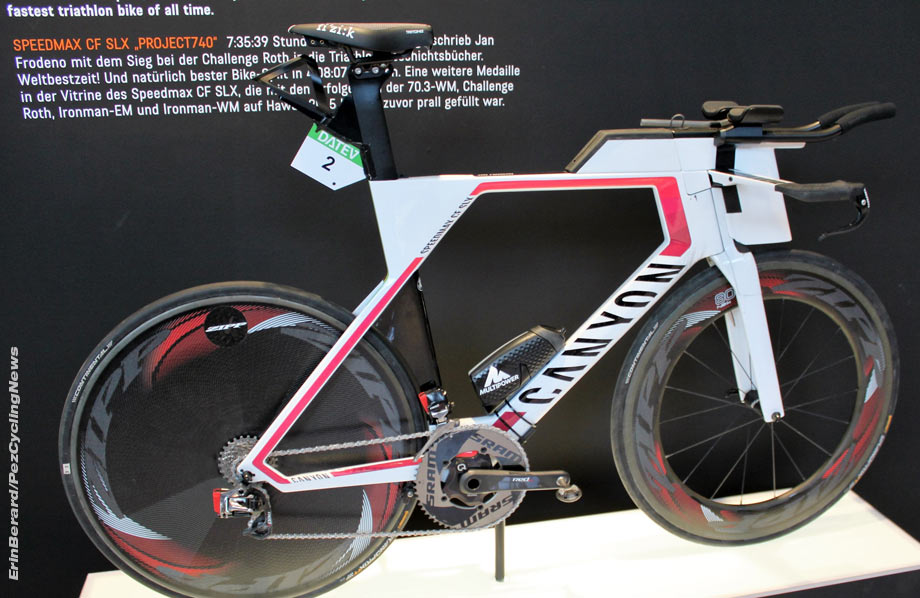 First up, the Speedmax CF SLX TT bike, used by world champion triathletes as well as Pro Tour teams Movistar and Katusha. Attracting a lot of fan attention in the booth was German triathlete Jan Frodeno’s tricked out machine. Jan’s palmeres include the gold medal winner in men’s triathlon at the 2008 Summer Olympics in Beijing, 2-time winner of the Ironman World Championship in 2015 and 2016, and the winner of the 2015 Ironman 70.3 World Championship.

Geeky triathlete bells and whistles include the gear box which comes equipped with two CO2 cartridges, two tire levers and a spare inner tube, all protected inside a soft neoprene shell between the top tube and down tube. There is even a built-in aerodynamically integrated nutrition storage box as well as hydration source. Comfort in the drops comes easy with extension grips, arm pads, and Ergon base bar grips. 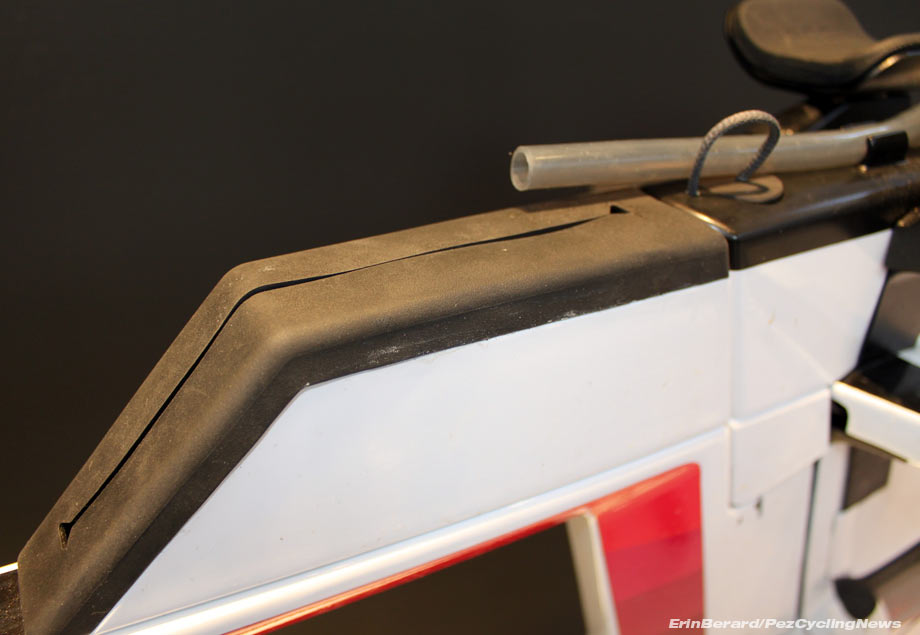 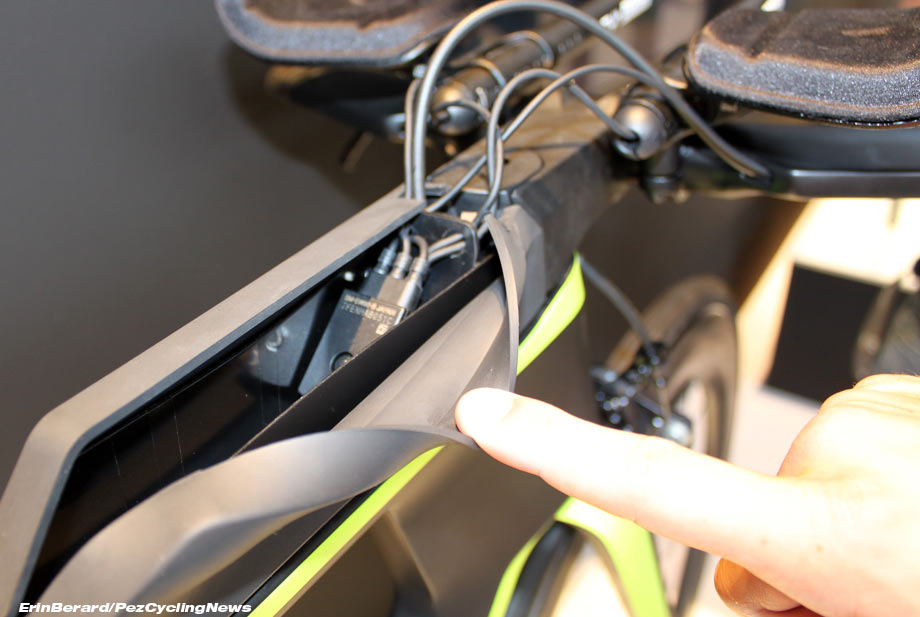 Two other important innovations to point out are the new braking system and the frame geometry. Believe or not, the front brake has been repositioned from the rear of the fork crown to the front and offers stiffer braking with an improved feel. All braking cables are protected behind a flexible cover, for easy maintenance. The rear brake remains positioned below the bottom bracket. Given that this is one of the stiffest points of the frame, the rider benefits from responsive braking power with easier adjustability. 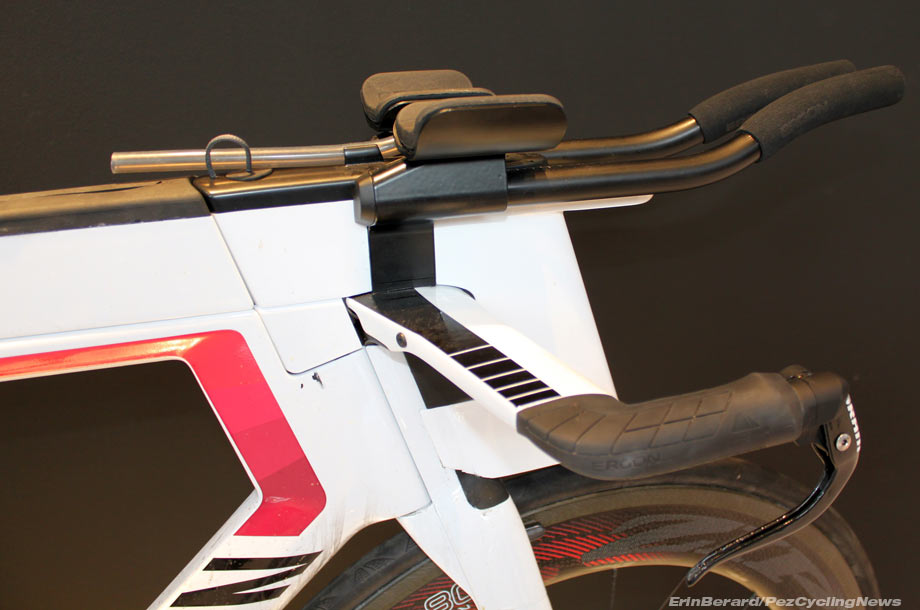 Every aspect of the bike’s geometry has been built for high-speed stability, simply look closely at its combination of long chainstays, long wheelbase and a steep steering angle.

Matt then spoke about Canyon’s recent prototyping with pro riders such as Katusha’s Alexander Kristoff, Joaquim Rodriguez, as well as Movistar’s Alejandro Valverde and Nairo Quintana on ride comfort, saddles, seat posts, bars and on the development of their new “ultimate road bike”, appropriately named the Ultimate CF SLX. Although this Ultimate model is now in its fourth generation, (originally launched in 2005), it has moved closer to the vision of every bike engineering team out there: “The perfect bike would weigh 0 kg and transfer 100 percent of the rider’s power to the road. At the same time, it would absorb every shock and be completely invisible to the wind.” (Source: Canyon Bicycles) 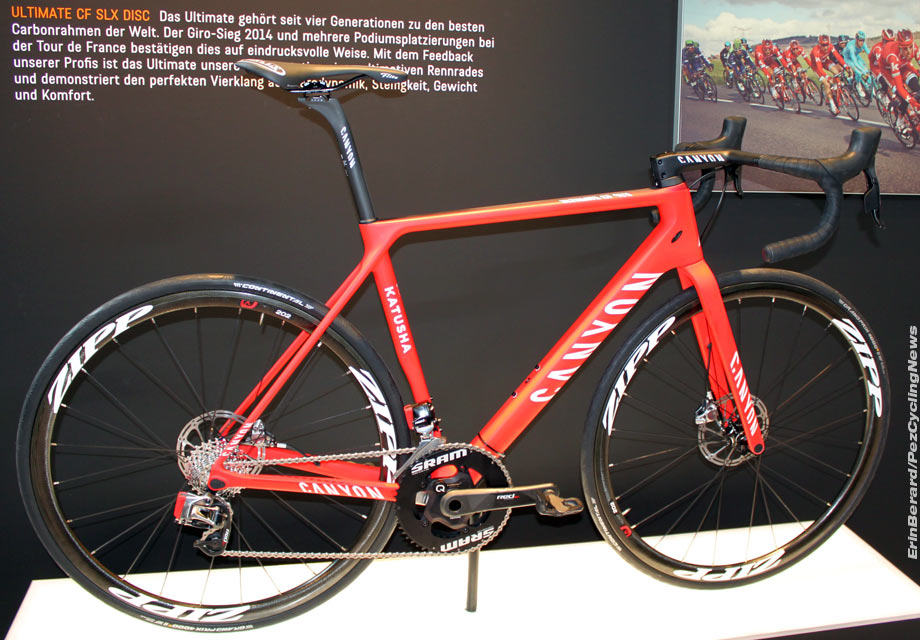 Matt pointed out that the 2017 Ultimate CF SLX has been re-engineered after many hours of wind tunnel testing, to optimize the balance between aero and stiffness-to-weight (STW). Key advancements include its perfectly balanced new narrower D-shaped down tube and reduced diameter chainstays with its broader, box-like top tube, wider-set seat stays and revised seat tube junction. Matt explained how this results in a much stiffer platform that compensates for the loss of lateral stiffness at the down tube and chainstays. 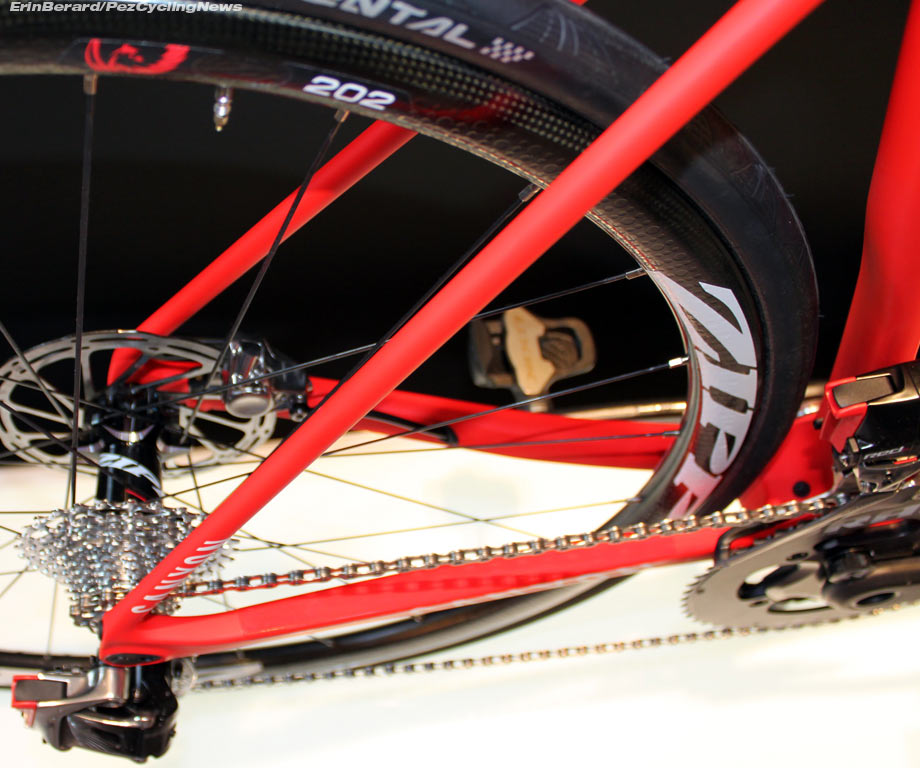 “Freewheeling downhill I roll faster than the other guys I ride with. When you consider that I’m lighter than they are, then it’s clear there’s a real advantage.” (Source: Nairo Quintana, on riding the Canyon Ultimate CF SLX.)

Also new for 2017 is the Ultimate CF SLX DISC for those riders looking for better control in all conditions.
Speaking of Nairo Quintana, Matt then pointed me in the direction of Nairo’s Movistar Aeroad CF SLX DISC bike on display. The Aeroad is Canyon’s “Made for the UCI WorldTour” model. 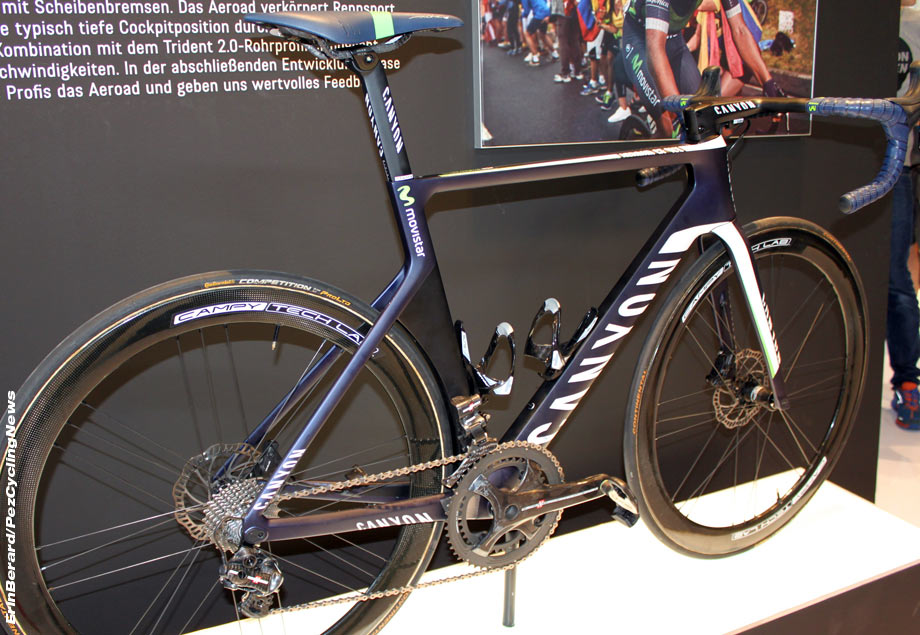 By compartmentalizing the seat tube, you can trace a consistent line across the entire frame. The frame also features a stand-out Trident profile throughout as well as in the fork design. You will notice the long top tube, short head tube and deep-set seat stays, characteristic of this performance-oriented design.

Standout features for me included the aero cockpit with its monocoque design blending into the top tube, which Canyon claims to save approximately 5.5 W against a conventional bar and stem combination. There is full cable and wire integration, including a specific recess for Di2 junction box as well as a seamless transition between bar tape and bar tops for lower frontal area fluctuation. This streamlined integrated cabling continues in the seat tube, which houses electronic front derailleurs so that no electronic wire is exposed to the elements, reducing the potential risk of mechanical issues and providing an amazingly clean look.

Other new aerodynamic features to look for are the rear wheel fairing integrated into the seat tube, the aero seat post without an external clamp, the prow-like form of the head tube, merging seamlessly into the untapered 1.25-inch fork shaft, and Shimano direct mount brakes with symmetrical dual-pivot design.

A visit to a bike manufacturer at this year’s Eurobike would not be complete without a mention of their gravel bike offering, so saving the trendiest for last, I made sure to check out Canyon’s Endurace CF SLX. Canyon has applied what it calls its “Sport Geometry” to this model, a design for comfort and performance. The company claims this design reduces the load placed on the rider’s back and shoulders, while guaranteeing a wide range of adjustment so all different styles of riders, from the aggressive to the upright, can find their ideal fit. 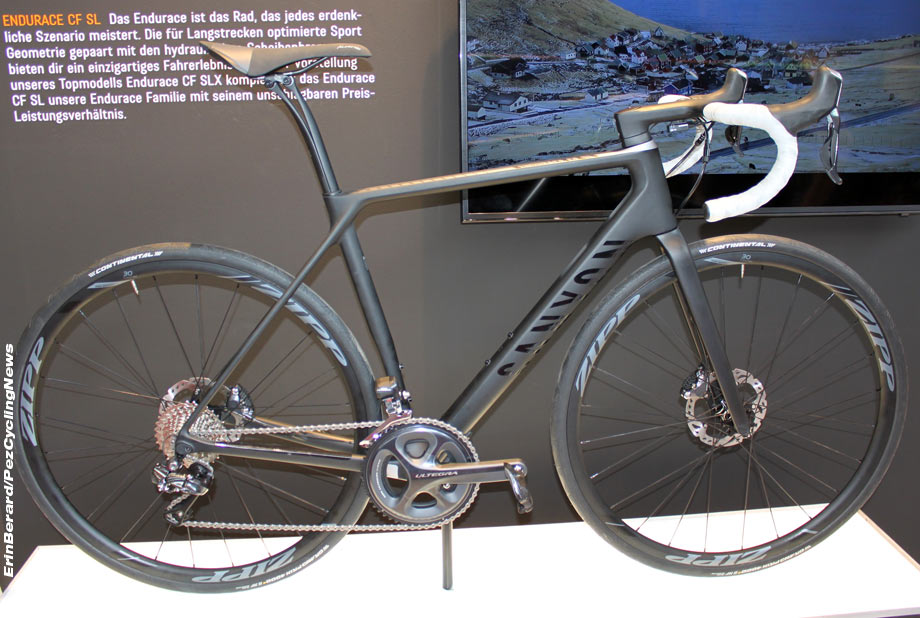 When I asked Matt how the Endurace compared to the 2017 Ultimate CF SLX, he explained how the Endurace offers a 10 mm higher stack with an 8 mm shorter reach. Maintaining optical proportion was a priority, which is why they built more height into the fork and crown for a more balanced design. The chainstays on the Endurace CF SLX measure 415 mm. Having an extra 5 mm over the Ultimate CF SLX increases stability at speed which is obviously crucial for high-speed descents. 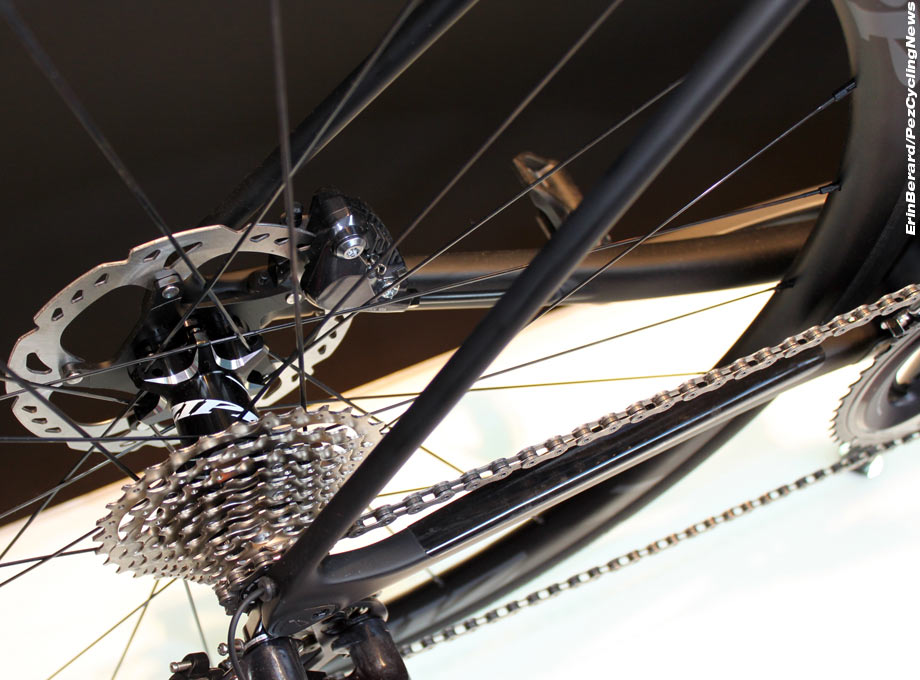 What’s super cool about the Endurace model is that it has benefited from the R&D hours spent on the Ultimate and Aeroad designs. From the Aeroad CF SLX’s Aerocockpit, Canyon developed a new H31 Ergocockpit for the Endurace, featuring an all-new clamping concept. Whereas conventionally, a gap is required to tighten the stem onto the fork shaft, with the H31, instead, the stem is pressed onto the shaft via two screws and a transition plate. What results is better distributed force around the shaft, which benefits the carbon structure and rider safety alike. 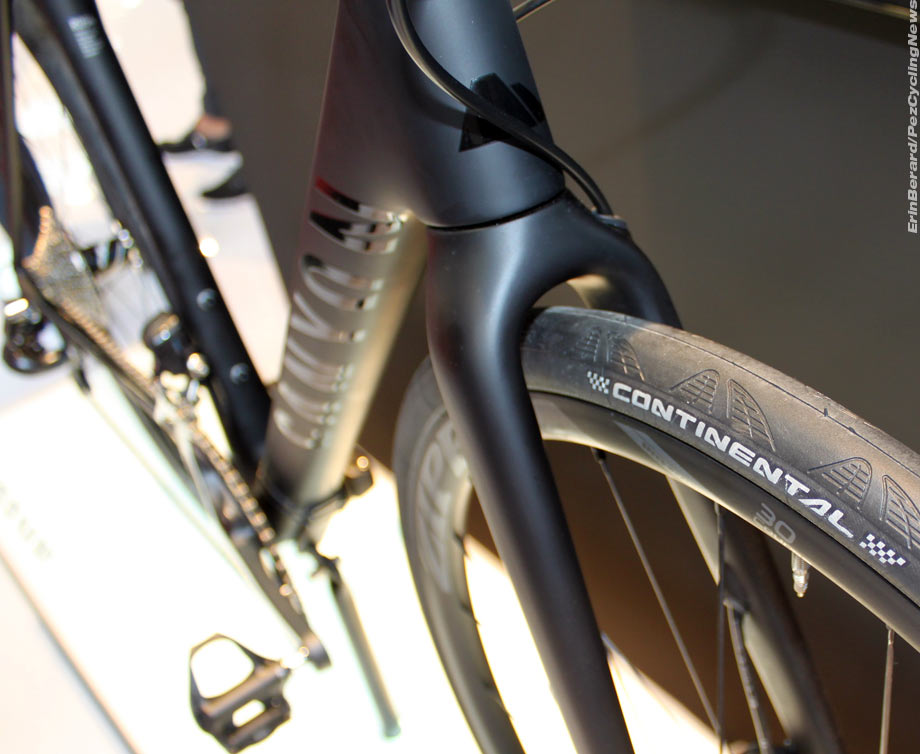 The Endurace CF SLX comes equipped with the standard, flat mount disc brakes and wider 28 mm tires, and both frame and forks have clearance to accept a maximum 33 mm tire width. Great news for the gravel and off-road adventurers as that extra volume offers increased surface contact for better road grip in all-weather and across uneven surfaces.

There are lots of options with Canyon, for all types of riders. Stay tuned for upcoming news of their launch in the US or if you can’t wait until then to start riding one, please visit www.canyon.com.